Kazakhstan wins, Belarus up too
Arkadi Shestakov celebrates after scoring the game-winning goal for Kazakhstan in overtime.
photo: Marat Akimzhanov
share
It was the battle of the two undefeated teams for the top spot in their race to promotion and host team Kazakhstan won it, 3-2 in overtime. Thanks to the extra point not only Kazakhstan but also Belarus will be among the top-two teams to earn promotion to the 2020 IIHF Ice Hockey World Championship in Switzerland.

Kazakhstan already got the news about promotion before the game because Korea, which was chasing the two teams for a top-two spots, surprisingly lost to Lithuania.

“We know what is the main aim – that we can take gold. We started very well with a lot of energy and scored two goals but then we conceded a foolish goal. Belarus scored the second goal in enthusiasm and took the initiative. But then we realized that we can’t lose, got more inspired and then we won,” said Nikita Mikhailis.

Kazakhstan takes the lead in the standings but will still have to confirm first place in the tournament during the last round of games tomorrow when Kazakhstan plays Hungary and Belarus will have a game against Korea.
“It was a very interesting, dramatic game, nervous from both teams. We told the guys that Kazakhstan is very dangerous in the beginning and not let them score the first goal but they got the lead anyway,” said Belarus head coach Andrei Sidorenko. “I’m proud of my guys that they didn’t give up. I’m glad for the team, for all the fans and the country that we will be back in the top division.”

Slovenia will start tomorrow’s day against Lithuania in a relegation battle. Both teams as well as Hungary are tied at three points and the last-ranked team will be relegated.
World Men
Kazakhstan vs. Belarus - 2019 IIHF Ice Hockey World Championship Division I Group A
Kazakhstan won the game of the two undefeated teams against Belarus 3-2 on Arkadi Shestakov's OT winner. The point was enough for Belarus to join Kazakhstan to the 2020 IIHF Ice Hockey World Championship.
KAZ BLR 04 MAY 2019
The start of the game reminded of the Kazakh national team’s games at Barys Arena before. They used their home-ice advantage in front of 7,418 fans and came out with enthusiasm, energy and many scoring chances. Throughout the game they outshot Belarus 42-17.

After eight minutes the fans got reason to cheer for the first time. Mikhailis found from a short angle the hole in Alexander Osipkov’s net at the close post.

The Kazakhs continued with a power play but couldn’t convert. Once it was over, however, Talgat Zhailauov made it a 2-0 lead after receiving a great horizontal pass through the crease from Yevgeni Rymarev.

“We are very happy, congratulations to all Kazakhstan that the team is finally back to the top division. I liked this game. It was the best game we had in this tournament. We had many opportunities and a very good start but still the problem that we didn’t capitalize on our chances. We want to be better in this aspect,” said Kazakhstan head coach Andrei Skabelka and added:

“I’m happy about the first win in history against Belarus. We wanted this result and we wanted to beat them finally.”
World Men
Interviews Kazakhstan-Belarus
After the game between Kazakhstan and Belarus we spoke with Nikita Mikhailis (KAZ), Martin St-Pierre (KAZ), Nikita Feoktistov (BLR) and Nick Bailen (BLR).
KAZ BLR 04 MAY 2019
In the second period Artyom Demkov gave Belarus some hope back. He got the puck passed back after a face-off on the right side won by Geoff Platt and sent off the shot for his team’s first goal at 6:49. Also due to three Belarusian penalties the Kazakhs were closer to extending the lead than Belarus to tie it up though.

That changed in the third period. At 3:16 Nikita Feoktistov scored after a blind pass from behind the net from Artyom Volkov to tie the game. It was the game-tying goal that gave Belarus the extra point to keep third-placed Korea at distance before the two teams meet tomorrow. Thanks to that Belarus has second place secured and can still hope for the tournament win.

“The best thing about the tournament and this game is that we made it to the top division. It was a nervous game and we should actually win this game, we had a lot of opportunities, but we lost it. The main thing is we made it,” Feoktistov said.

On Saturday night it was the Kazakhs though who celebrated the win. Leonid Metalnikov won a puck battle in the own zone against Belarus’ Alexander Malyvko, Alikhan Asetov got the puck and passed to Arkadi Shestakov for the breakaway. He beat Osipkov for the game-winner and first place after four rounds of games and pole position for the tournament win tomorrow.
Kazakhstan vs. Belarus - 2019 IIHF Ice Hockey World Championship Division I Group A 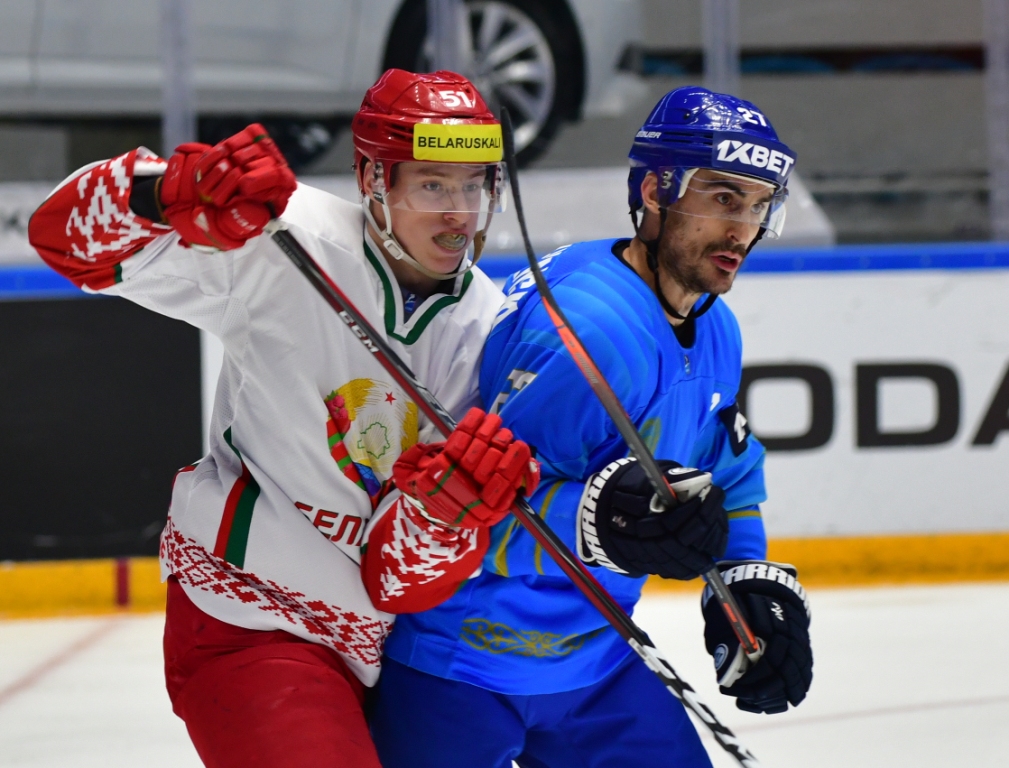 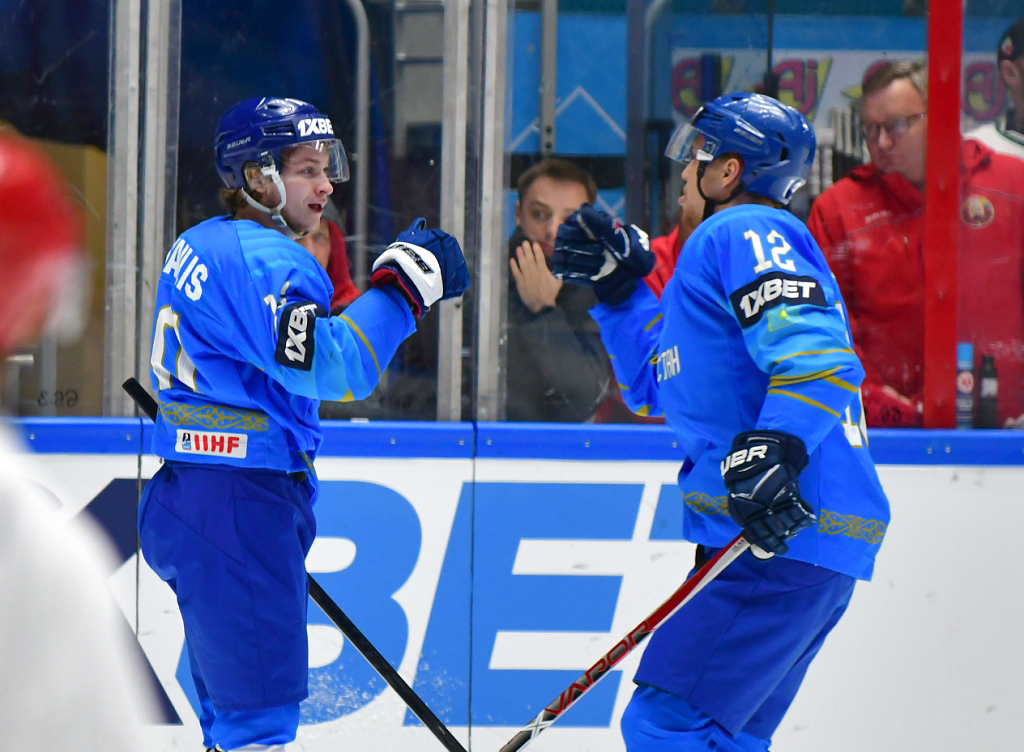 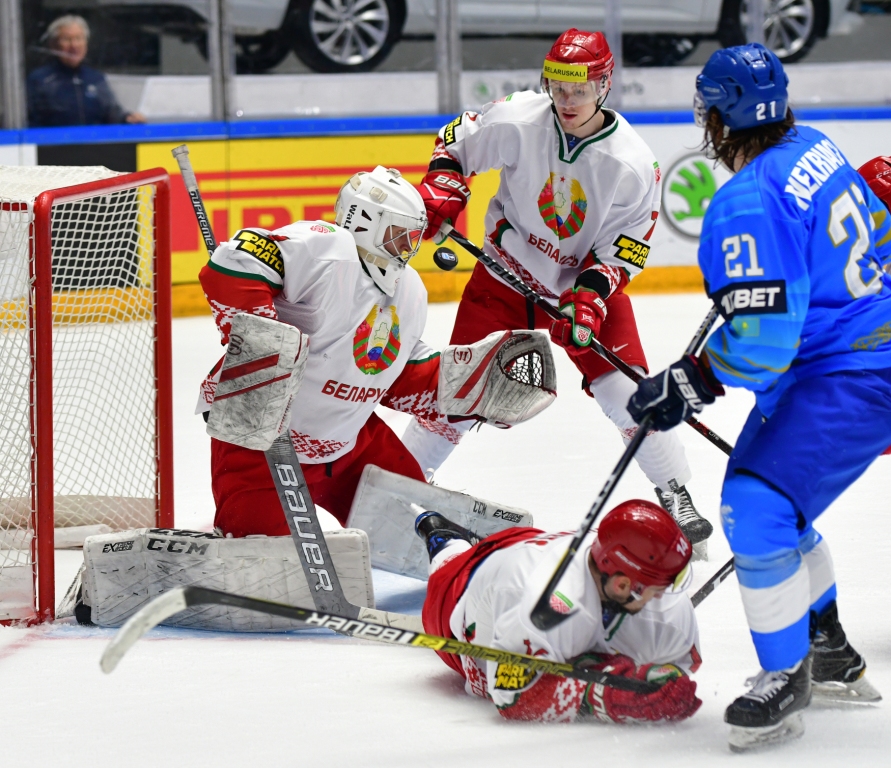 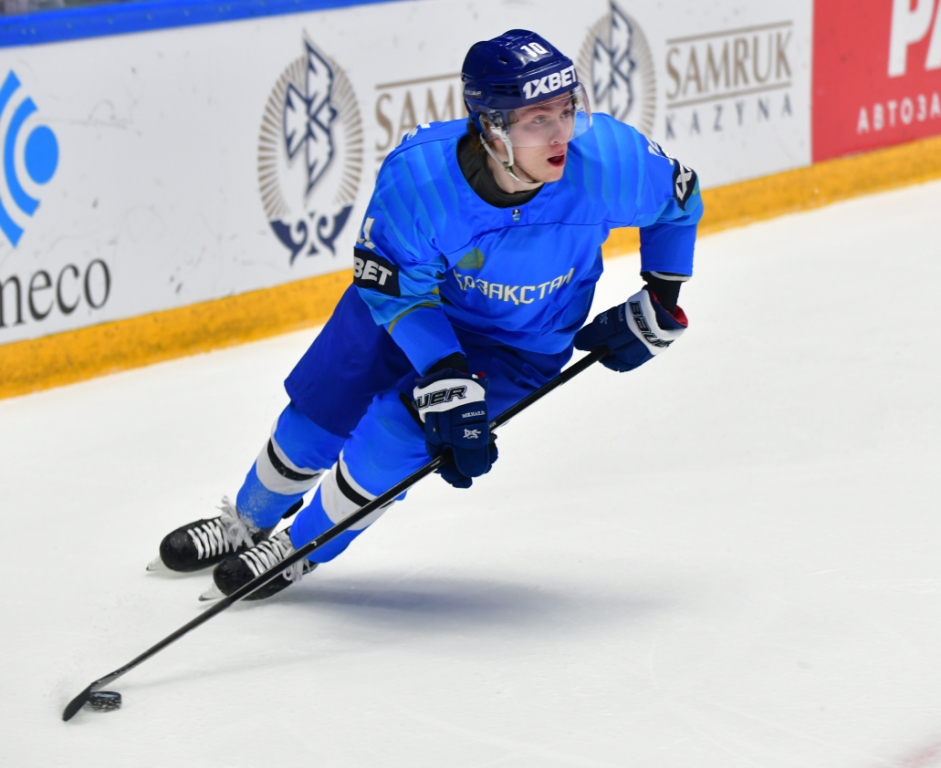 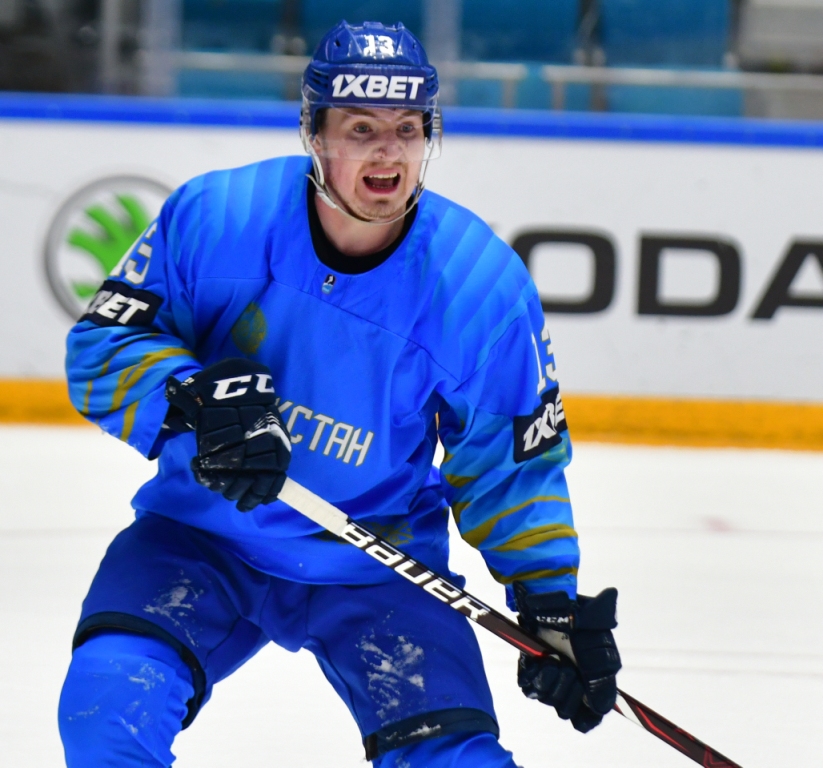 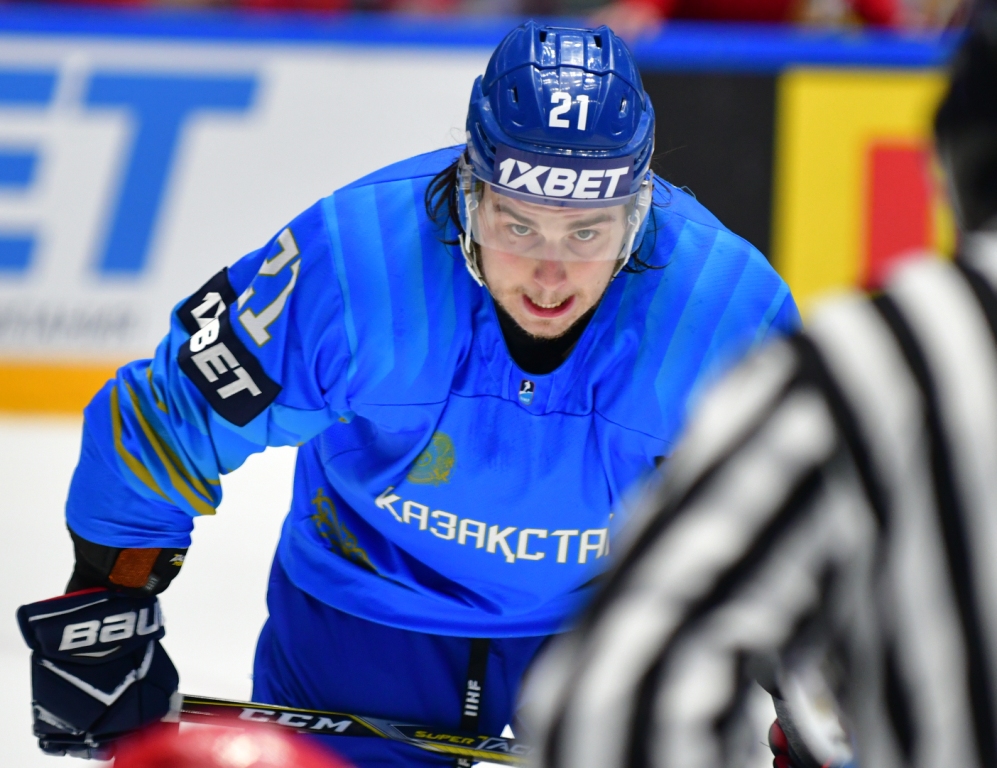 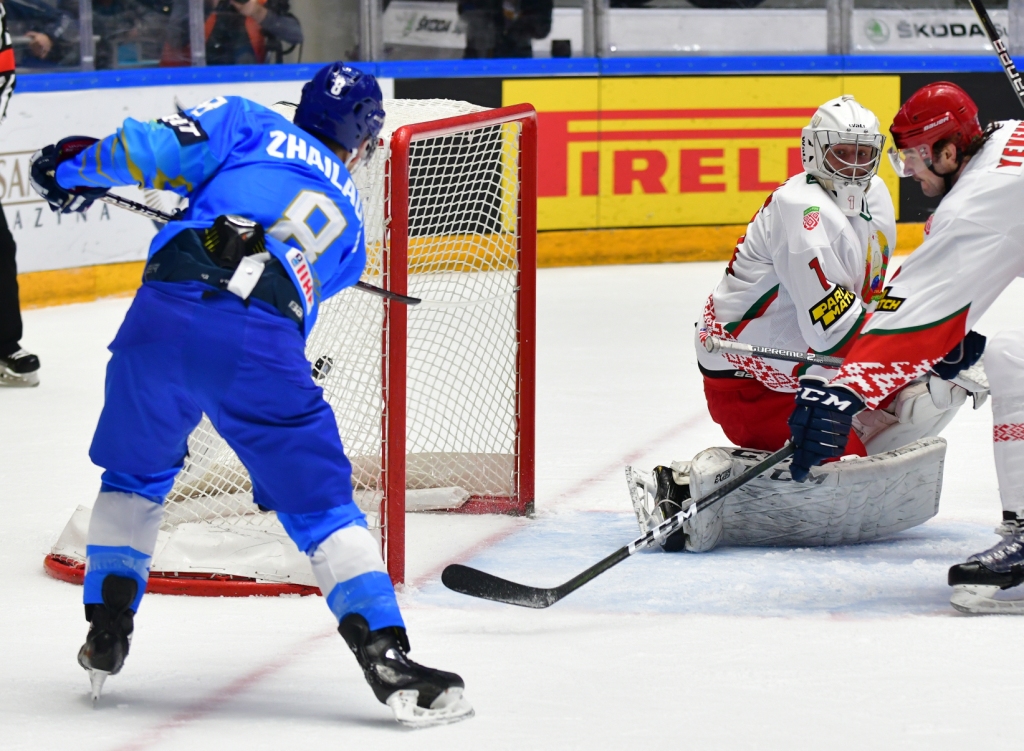 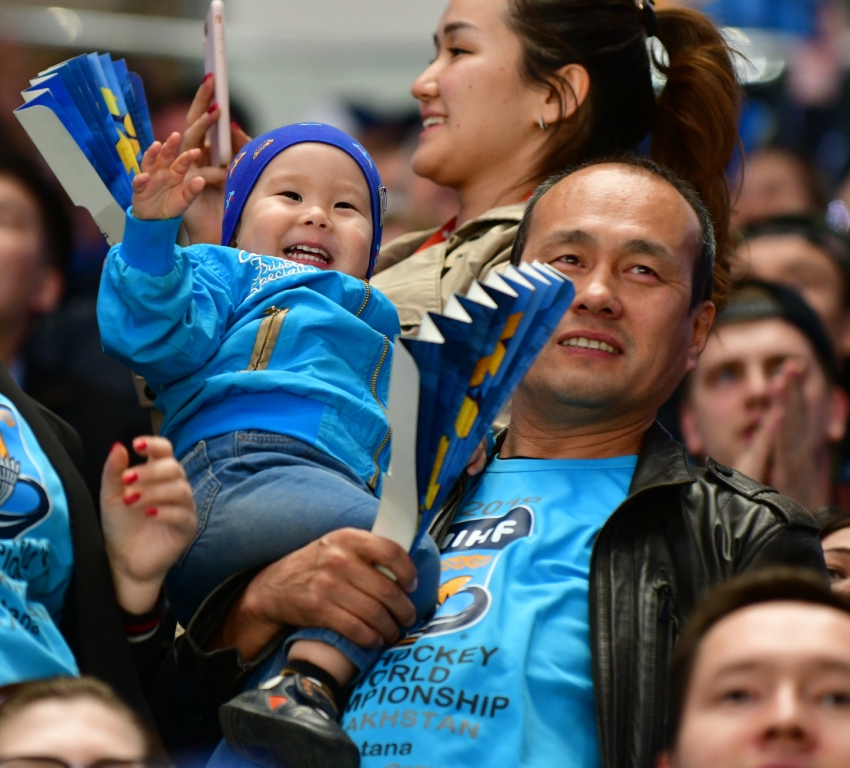 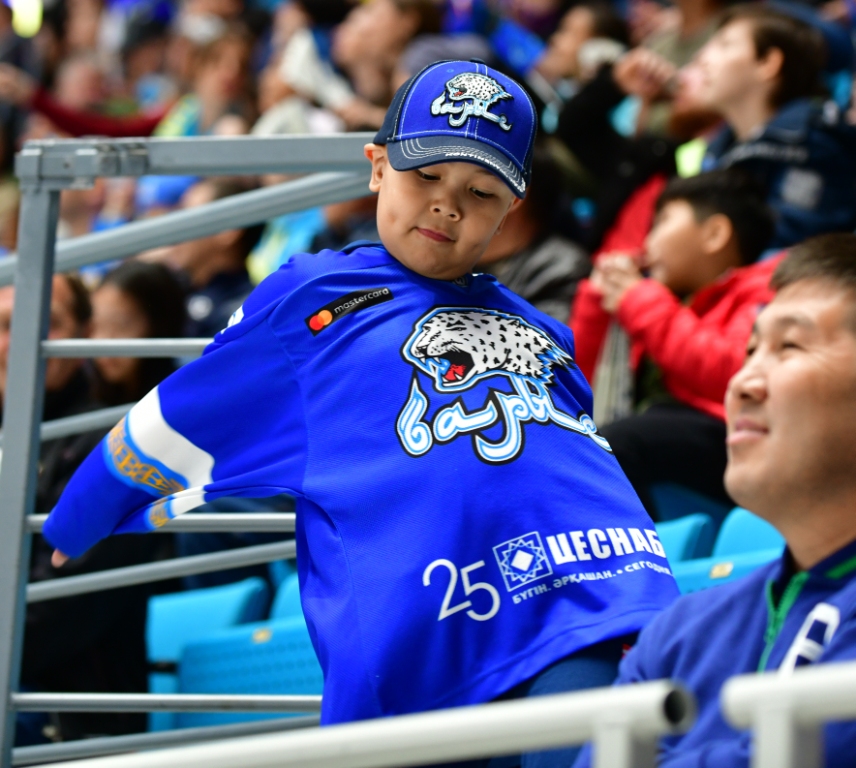 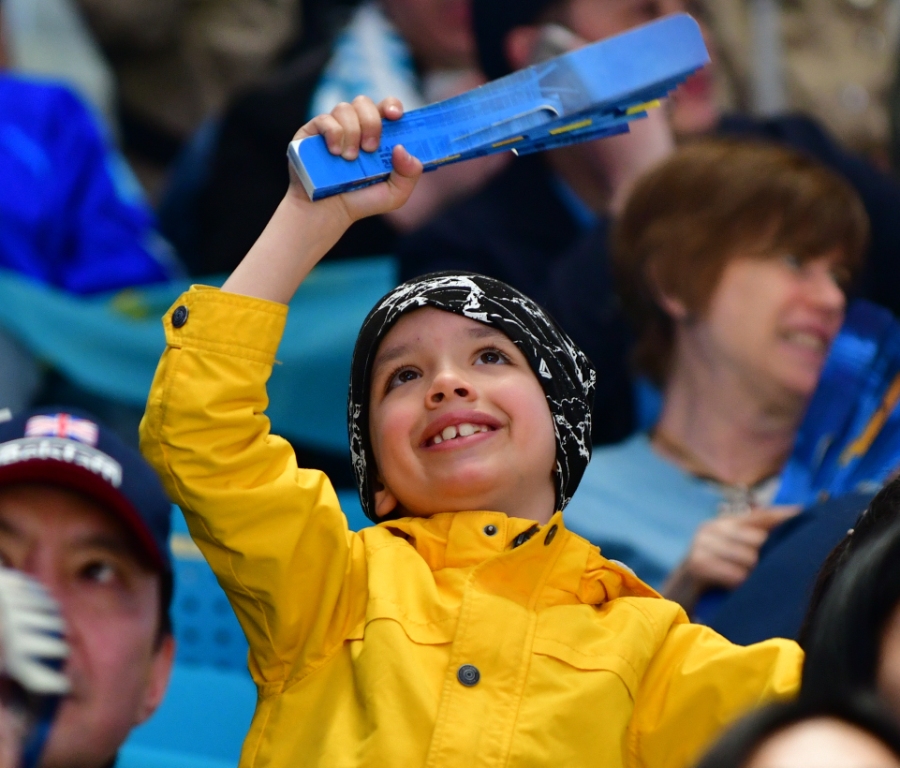 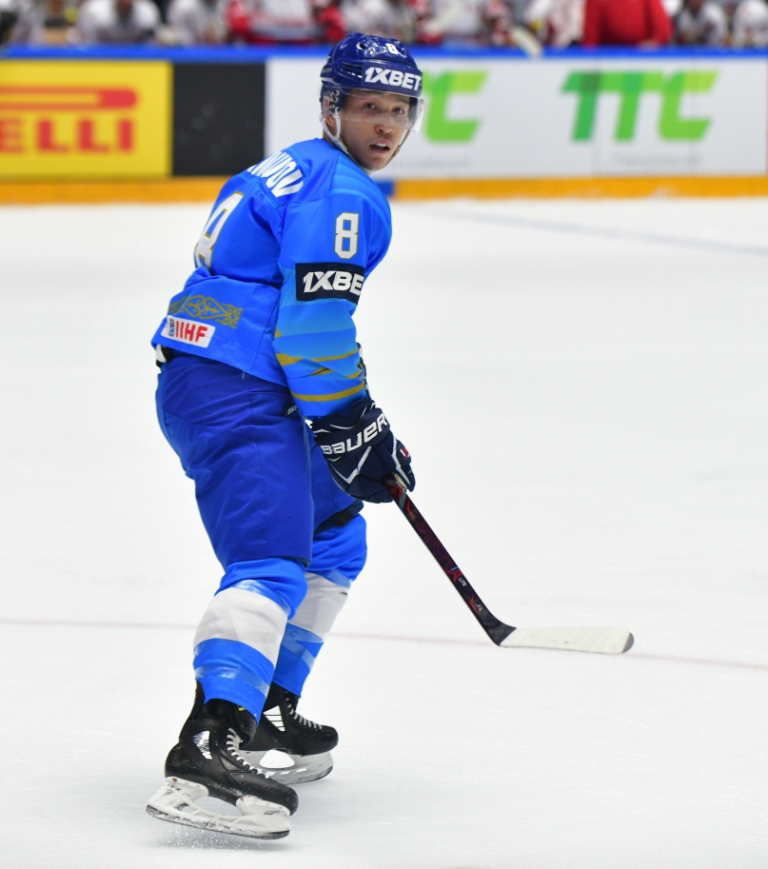 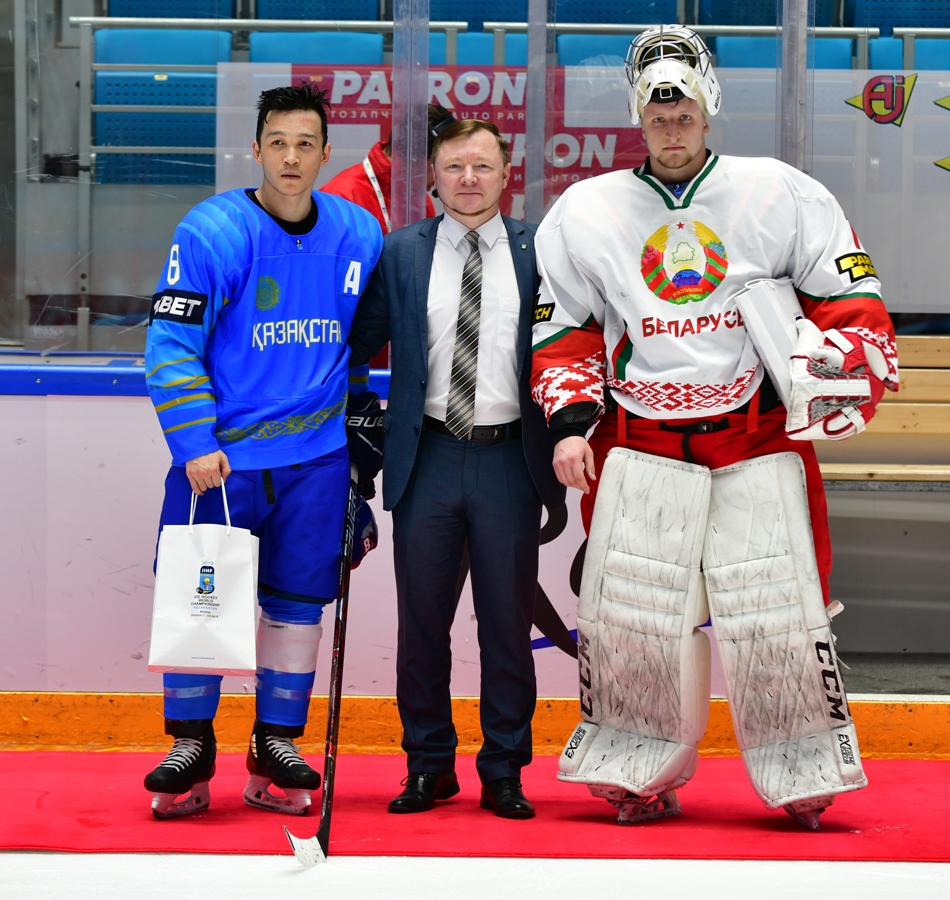 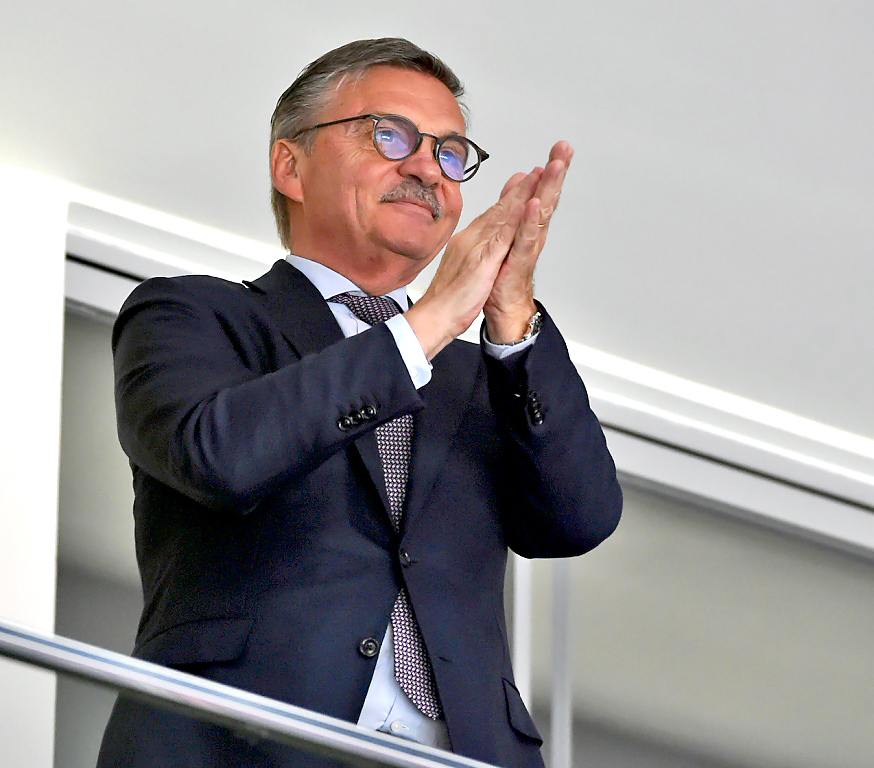 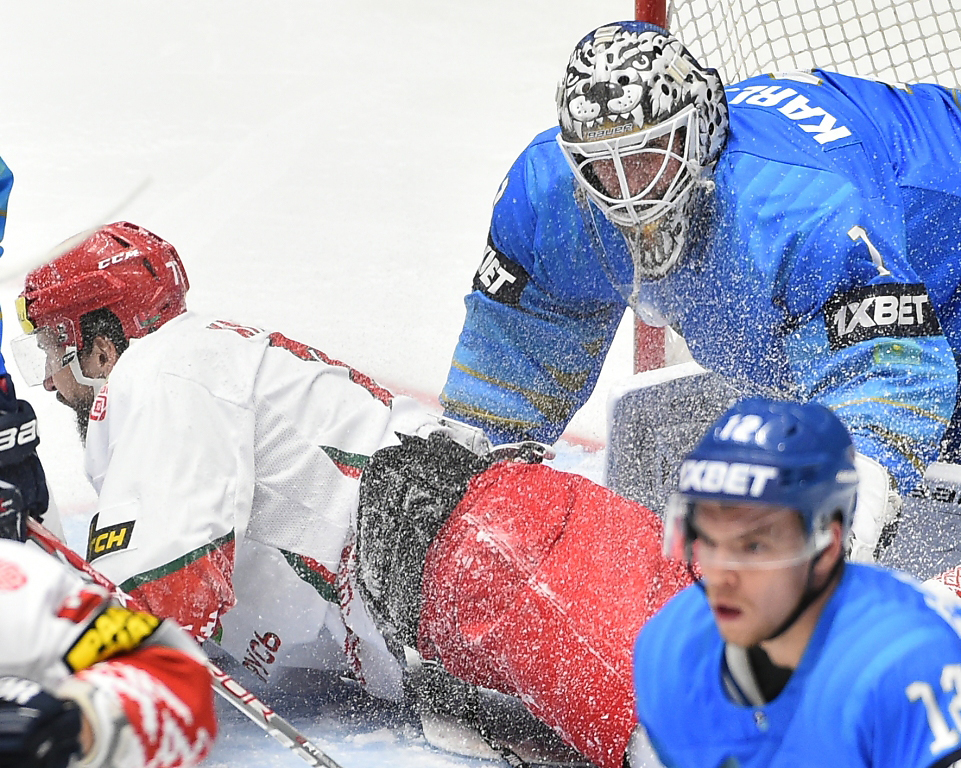 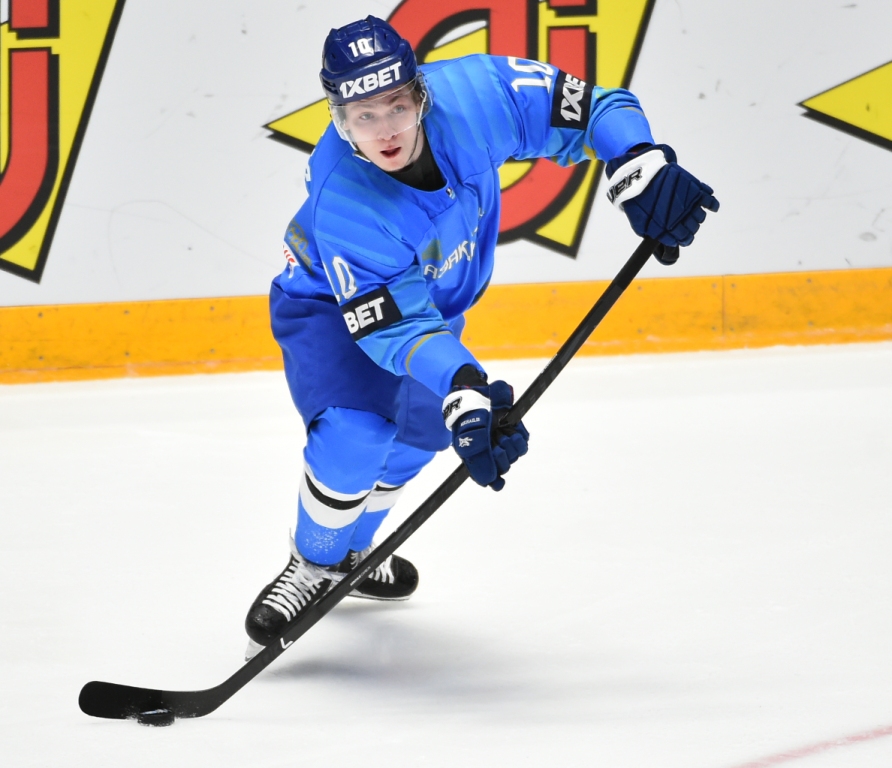 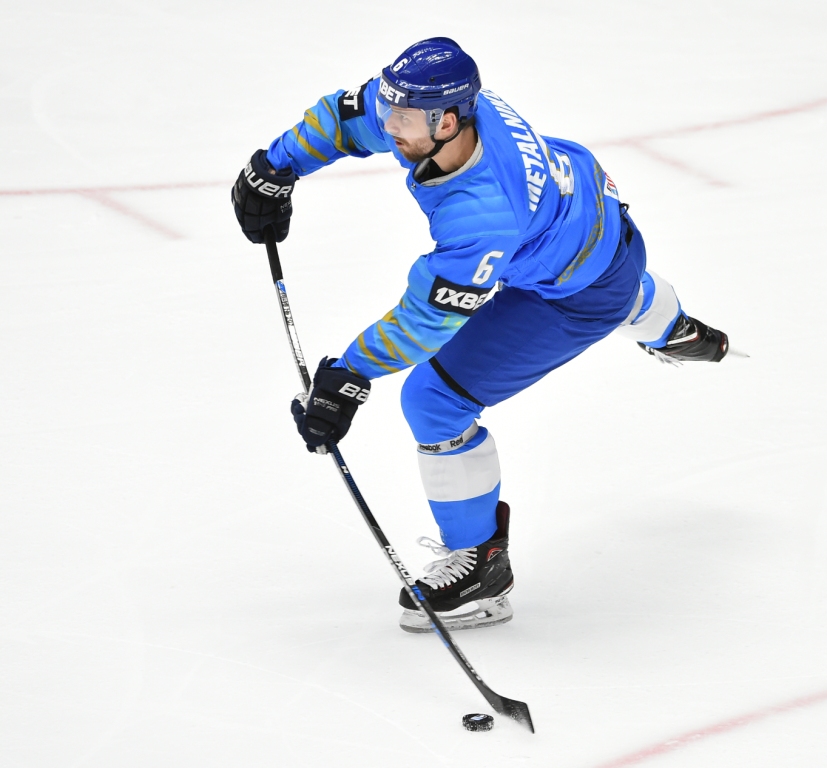 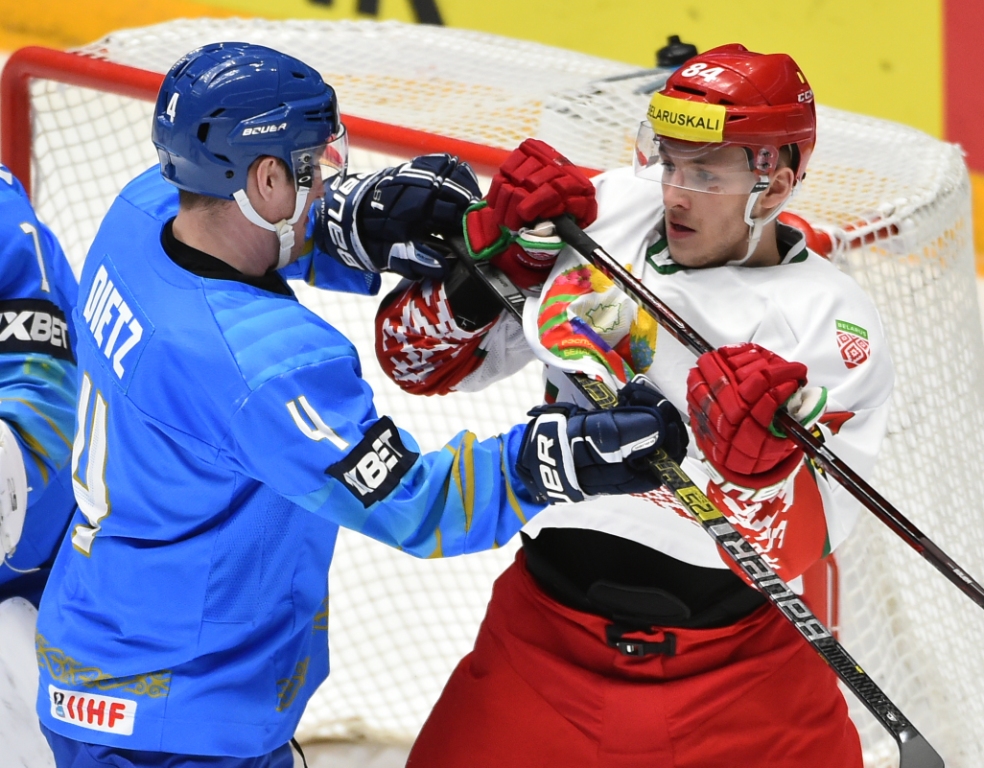 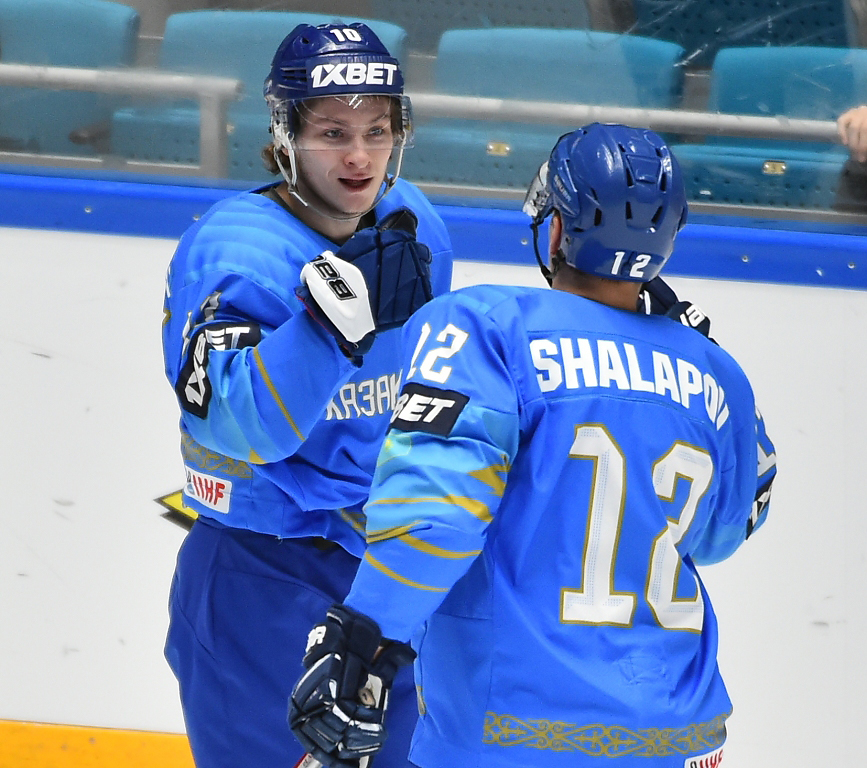 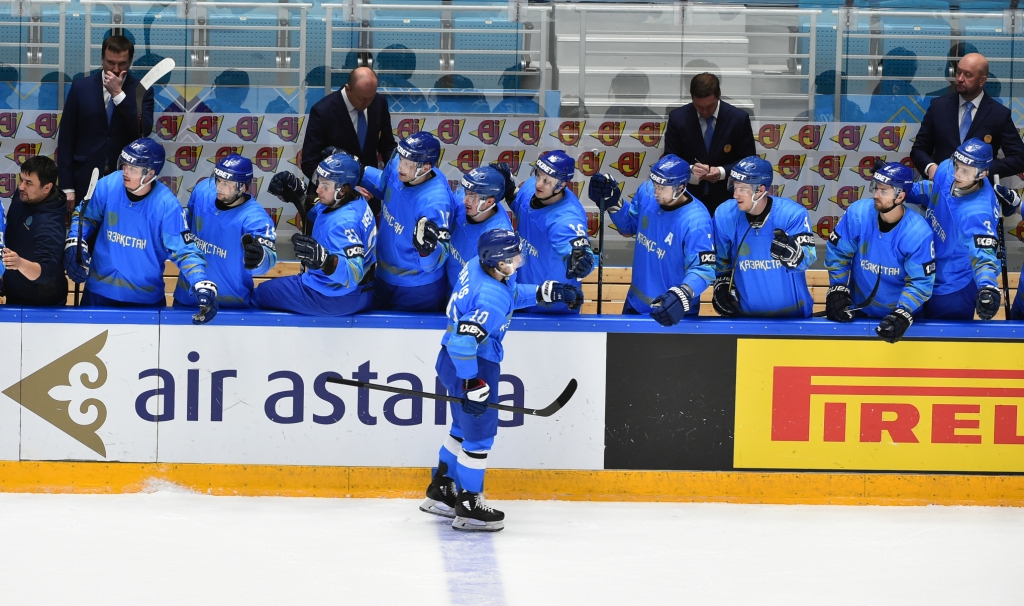 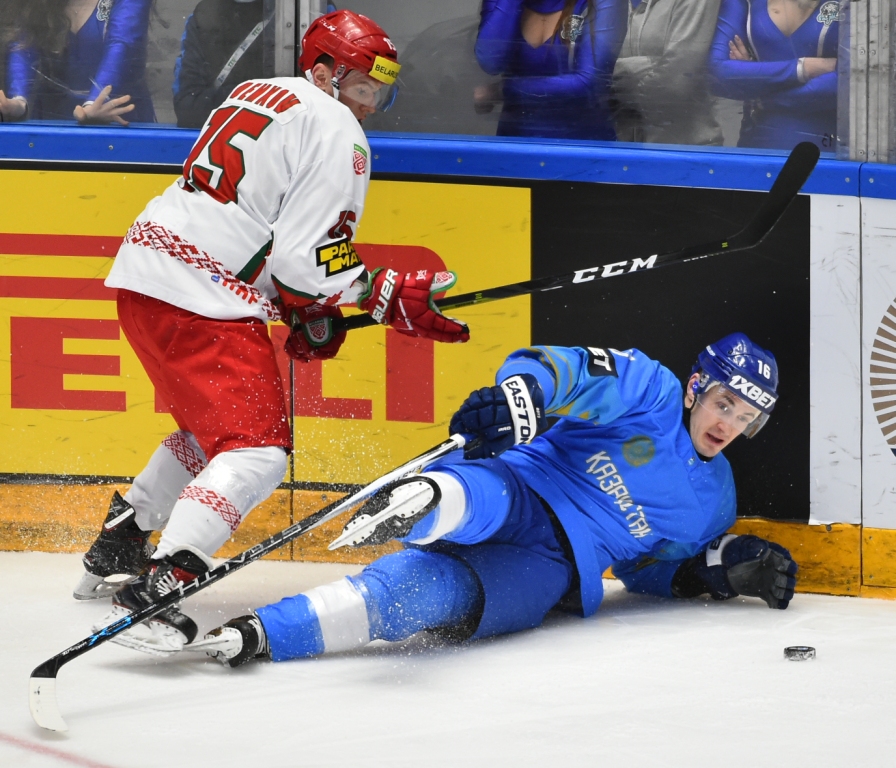 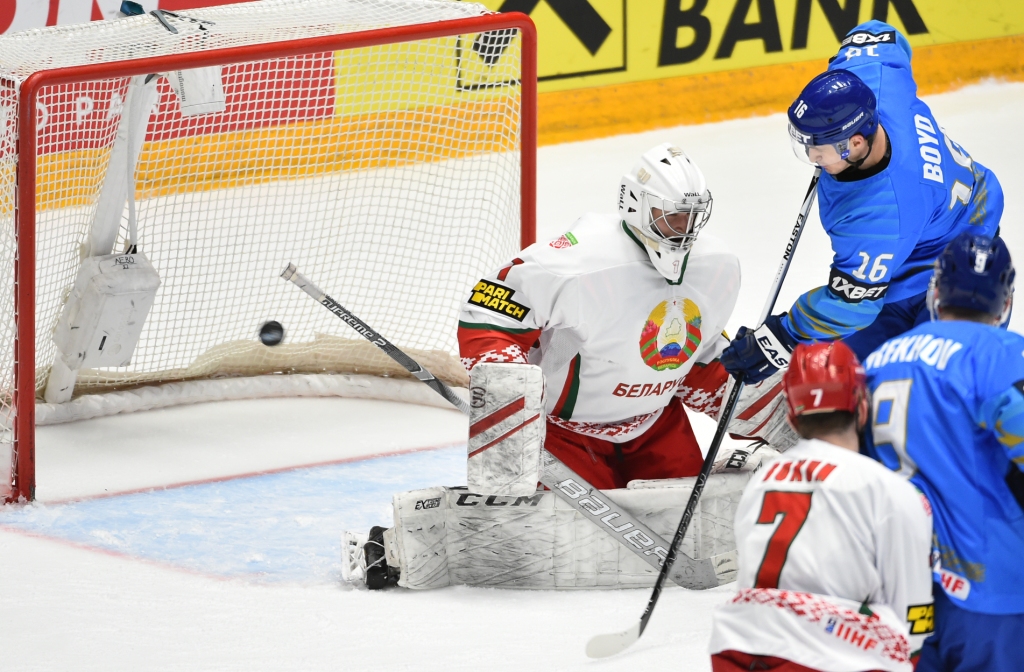 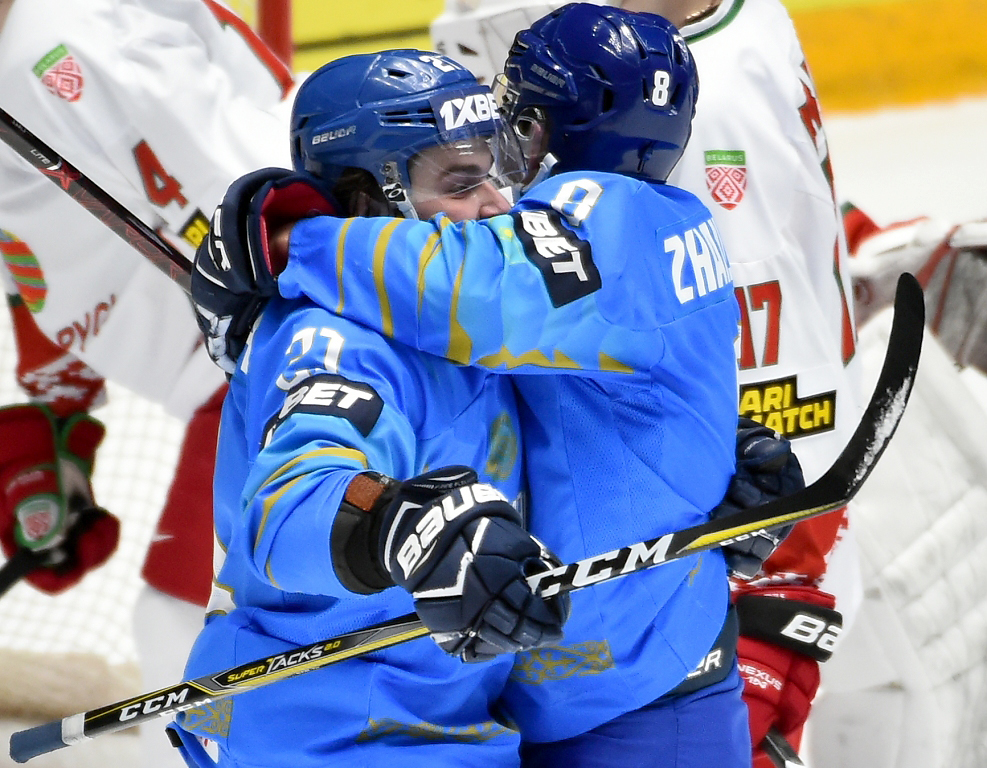 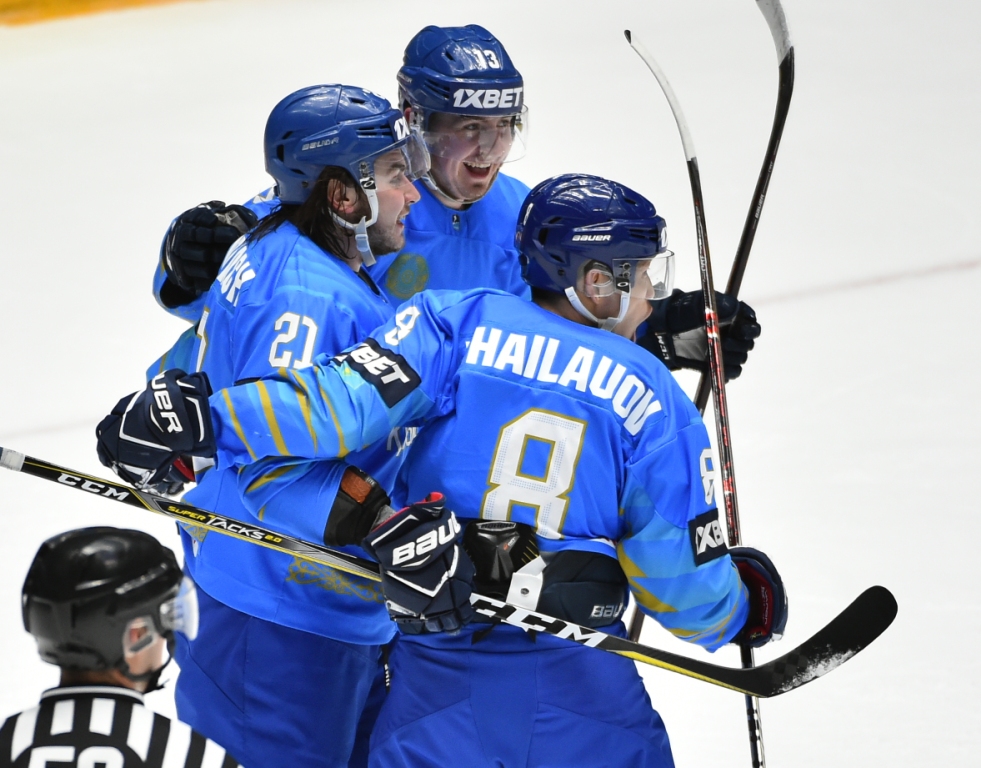 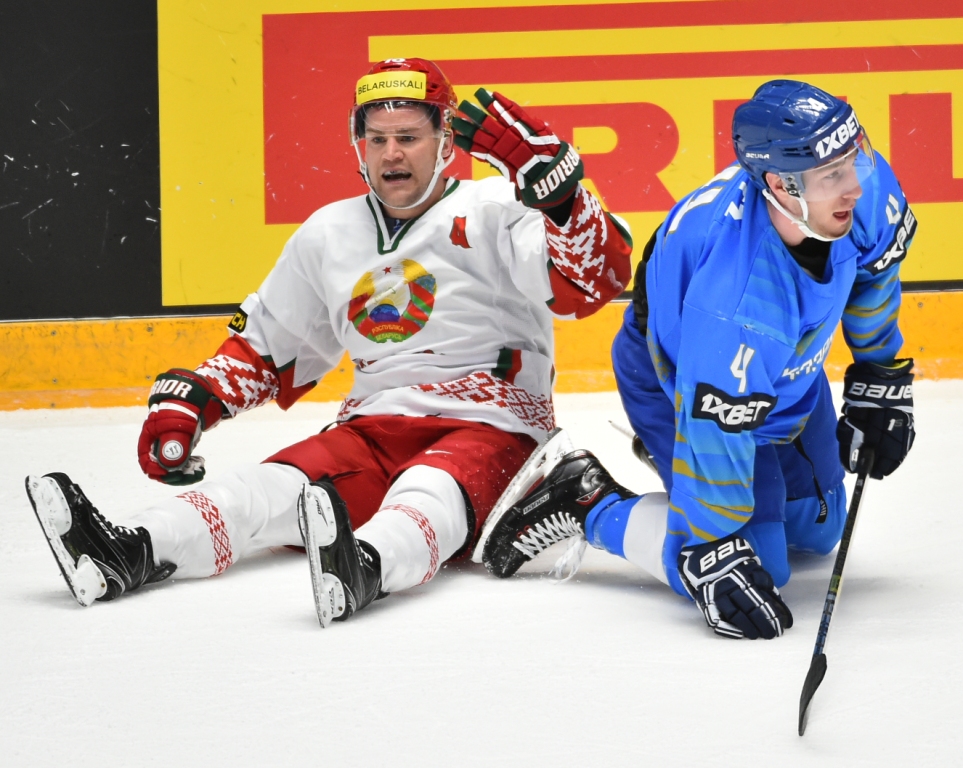 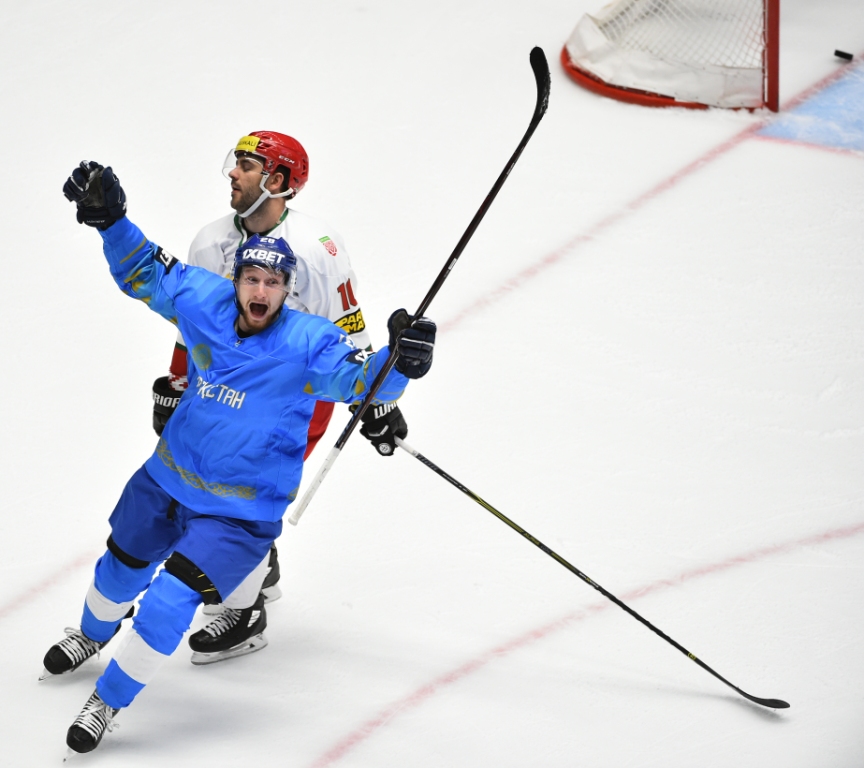 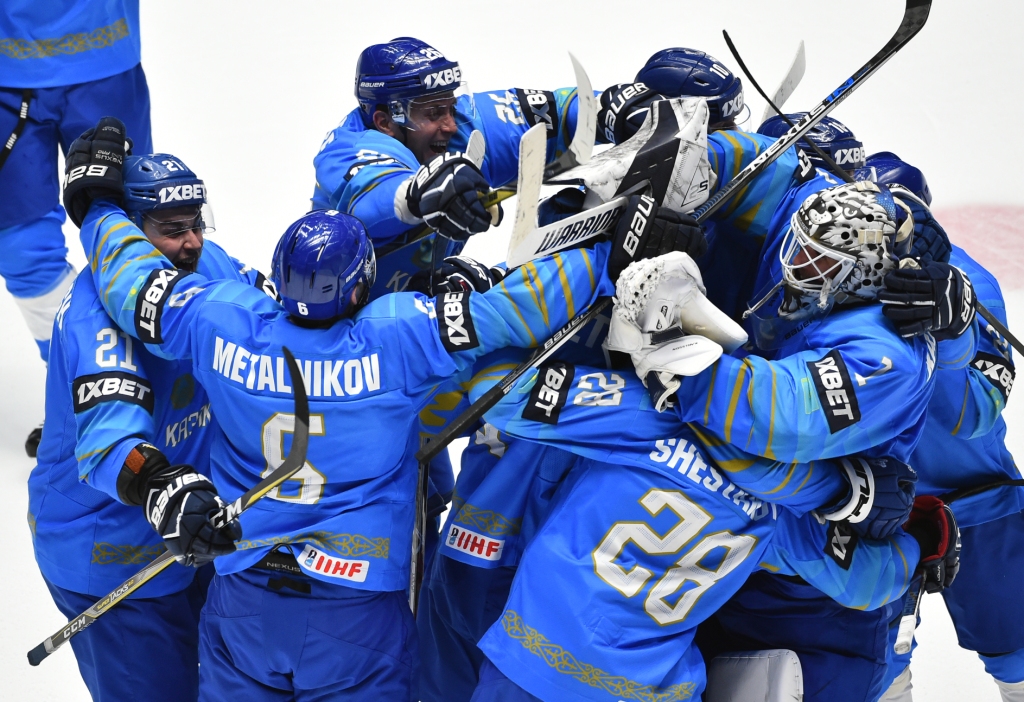 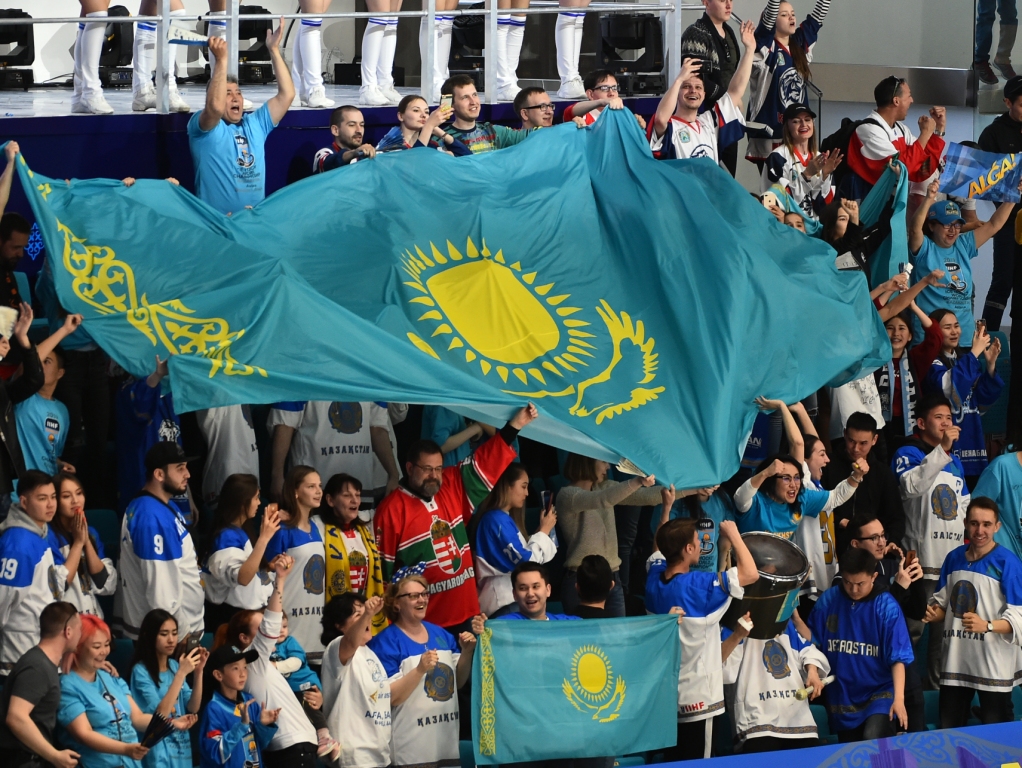