The Swiss are famous for their banking acumen, but they were unable to deposit any goals in Canada's net in a tournament-opening 6-0 loss on Thursday at Espoo's Metro Areena.

"We're obviously hoping to improve throughout the tournament," said Spooner. "I thought we did some good things, but also have some things to improve on. Obviously we got some shots and got some goals, but we did give them a few chances that we probably shouldn't have. But I thought for our first game, we're going to keep building off that."

Overall, it was an efficient victory against a young Swiss team that is adjusting after the post-Olympic retirement of stars like goalie Florence Schelling and defender Christine Meier.

Canada outshot the Swiss 53-6, giving Canadian starting netminder Shannon Szabados an easy path to her fifth career Women's Worlds shutout. Swiss goalie Andrea Brandli saw her first senior IIHF action ever after making the team but not playing at the 2016 and 2017 Women's Worlds and 2018 Olympics.

"It was a fun game for me personally," said Brandli. "They came out flying. We tried our best. It didn't work this time. But we have to learn from that and take it into the next couple of games."

Special teams weren't perfect for the Canadians. They took three minor penalties for stick fouls and went 0-for-3 on the power play. But otherwise, there was little for the motherland of hockey to complain about while commencing its quest for its first gold medal at this tournament since 2012.

Next up, Switzerland takes on Russia on Friday. Canada will battle the archrival Americans on Saturday. It will be their first meeting since the U.S. won Olympic gold in a thrilling 3-2 shootout victory in PyeongChang.

After considerable speculation about the state of her lower-body injury, Canadian captain Marie-Philip Poulin dressed for her team’s first game, but did not play. As when her Les Canadiennes de Montreal lost 5-2 to Calgary in last month’s CWHL Clarkson Cup final, the 28-year-old Olympic legend acted as an encouraging voice on the bench."She's a huge role model, a great captain," said Gabel. "She's just really supportive both on and off the ice. She has a lot of good encouragement, supportive, positive words. Definitely good to have her on the bench for this game."

Meanwhile, Swiss ace Lara Stalder, who had a shoulder injury during her SDHL season with Linkoping HC, was not in the lineup.

World Women
Switzerland vs. Canada - 2019 IIHF Ice Hockey Women's World Championship
The Swiss are famous for their banking acumen, but they were unable to deposit any goals in Canada's net in a tournament-opening 6-0 loss on Thursday at Espoo's Metro Areena.
CAN SUI 04 APR 2019

Seconds after Szabados was involved in an odd, inadvertent collision with referee Miyuki Nakayama, Gabel drew first blood with her first career Women’s Worlds goal at 9:08.

The 2019 Patty Kazmaier Award winner accepted a backhanded centering pass from Brianne Jenner on the rush and used a Swiss defender as a screen, beating Brandli. Gabel, a two-time NCAA champion with Clarkson University, is one of two Patty Kazmaier winners on the Canadian roster, along with two-time Women’s Worlds silver medalist Rattray.

"Jenner got the puck and made a nice pass into the middle of the ice," Gabel said. "I shot it on net and it went in."

Just 16 seconds later, Spooner’s high shot on a Sarah Nurse set-up made it 2-0. Incidentally, the record for the fastest two Canadian goals at a Women’s Worlds was set 10 years ago to the day by Carla MacLeod and current assistant coach Caroline Ouellette. They scored 10 seconds apart in a 13-1 romp over China in Hameenlinna.

Clark made it 3-0 at 1:25 of the third period in a goalmouth scramble. The goal was extensively video-reviewed and ruled good. Clark got her second of the night on a redirect at 7:43.

At 13:54, Rattray made it 5-0 with a redirect of Fortino's long blast. Turnbull rounded out the scoring with 1:57 left. The shots-fest continued in the third: 21-0 for Canada.

"I think the energy wasn't the same as in the first and second period from all of us," said Brandli. "We did some mistakes. But I thought they pushed harder in the third period."

The Swiss men have achieved high-profile victories over Canada at the Olympics and IIHF World Championships, but so far their female counterparts have not followed suit. This was the sixth straight Canadian win over Switzerland at the Women’s Worlds. Dating back to 1997, Canada has outscored Switzerland 56-0. 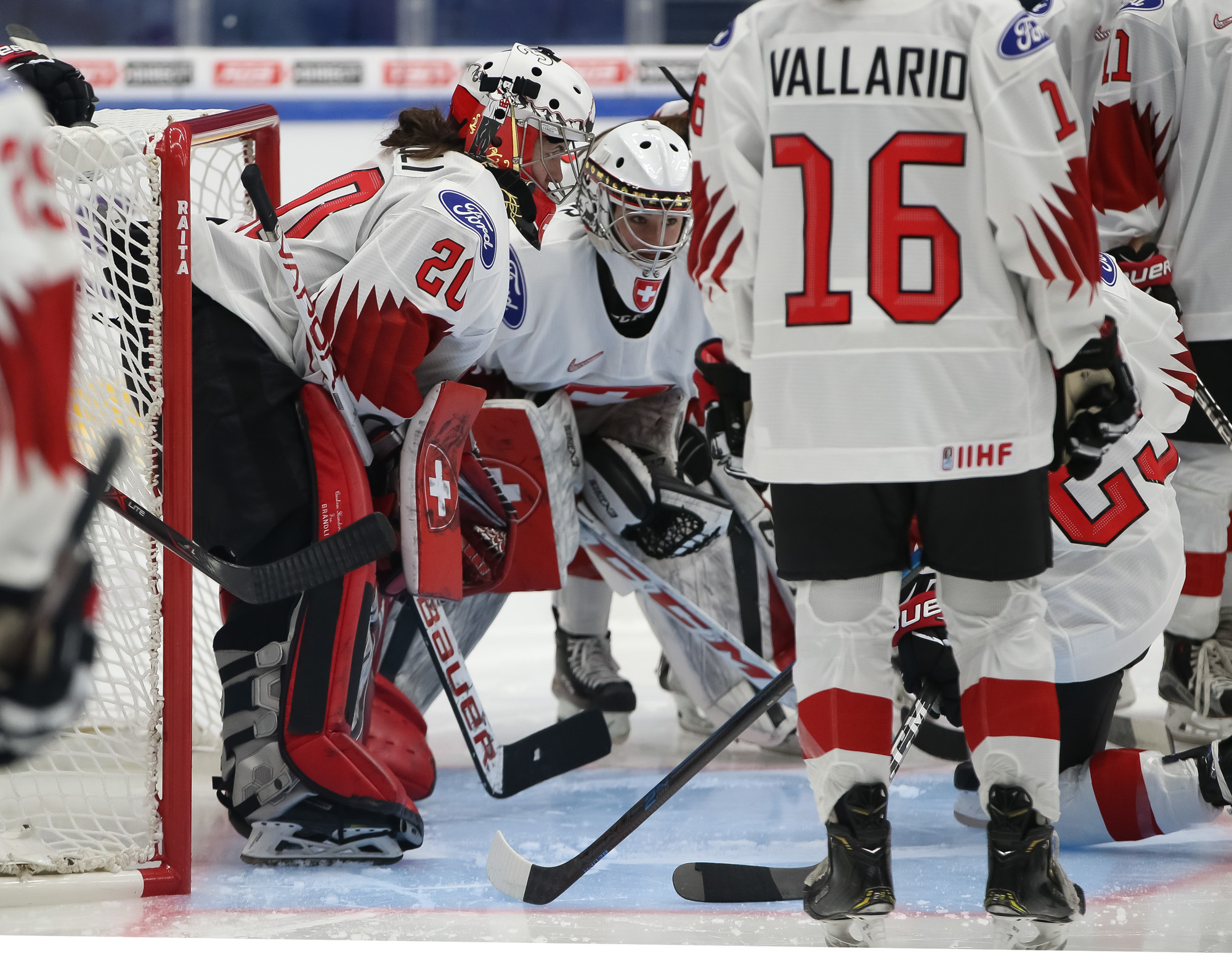 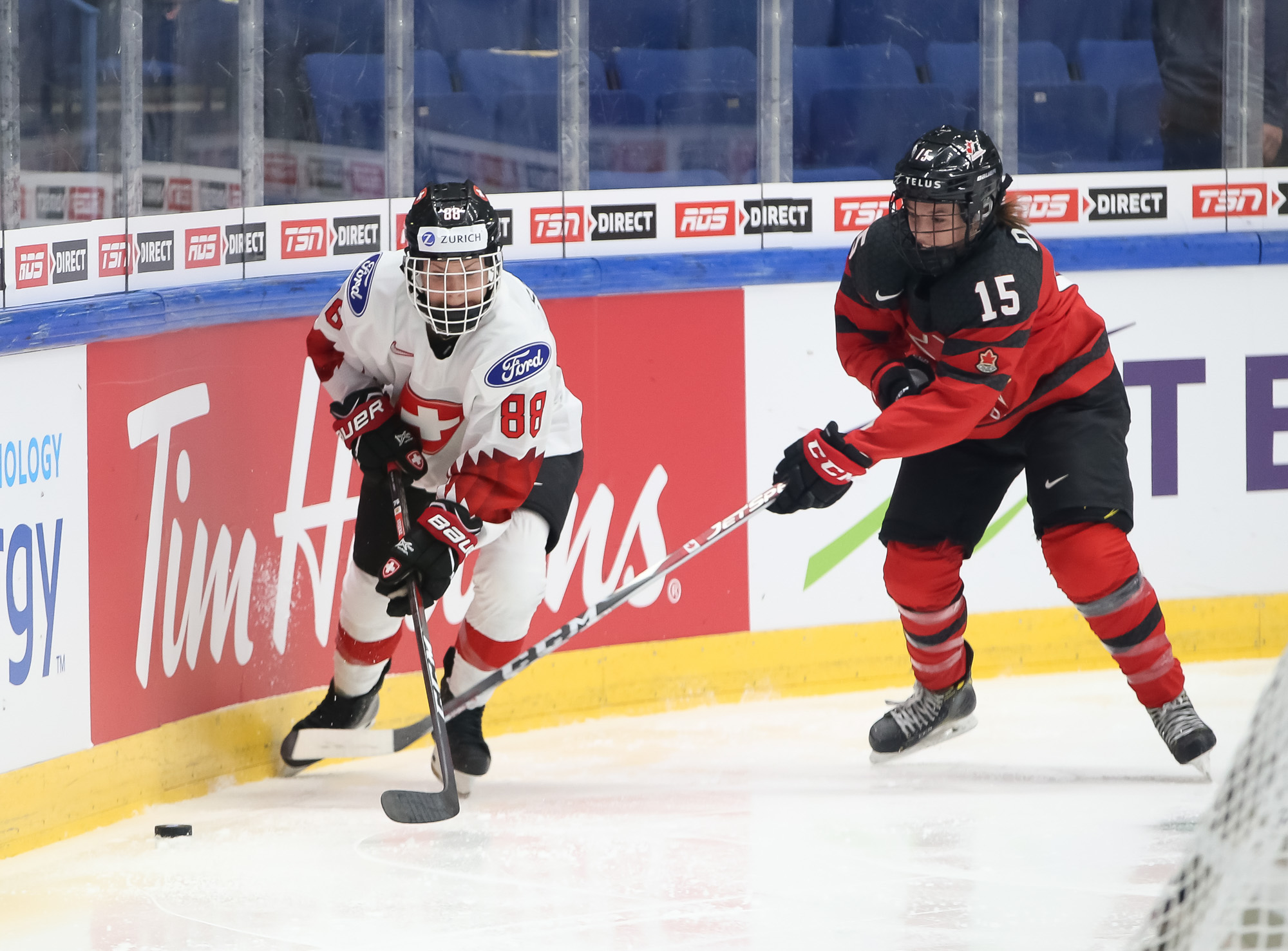 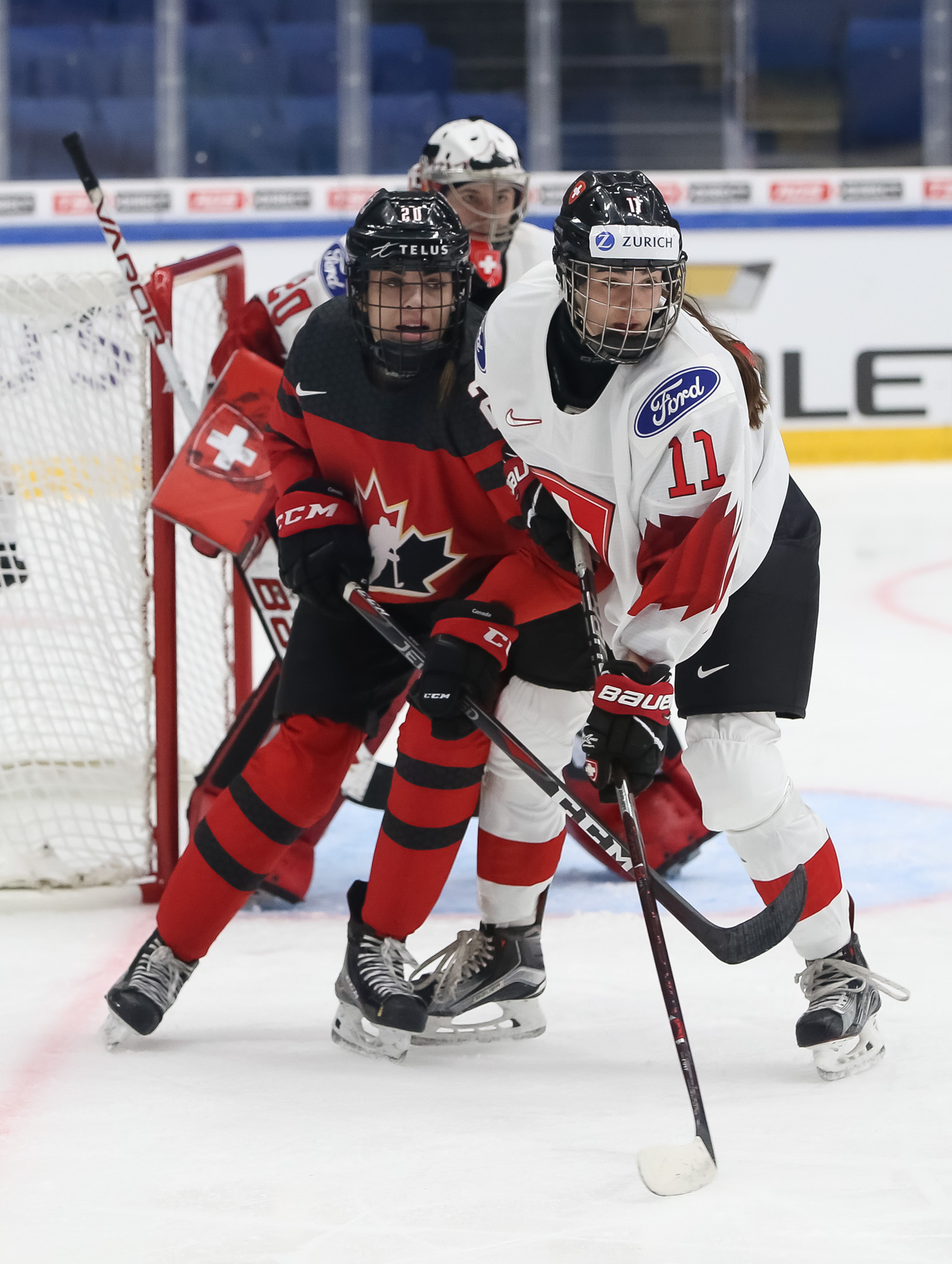 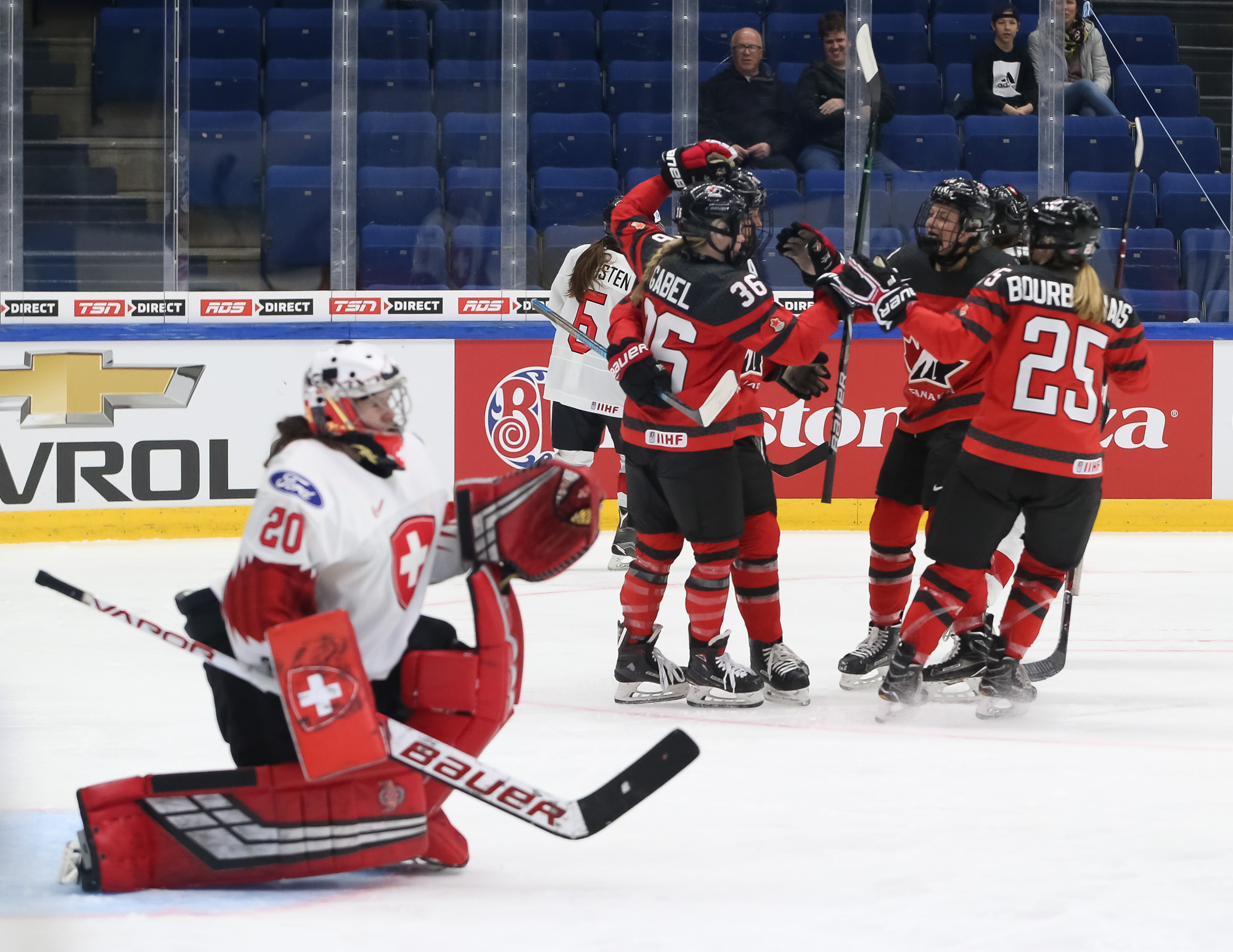 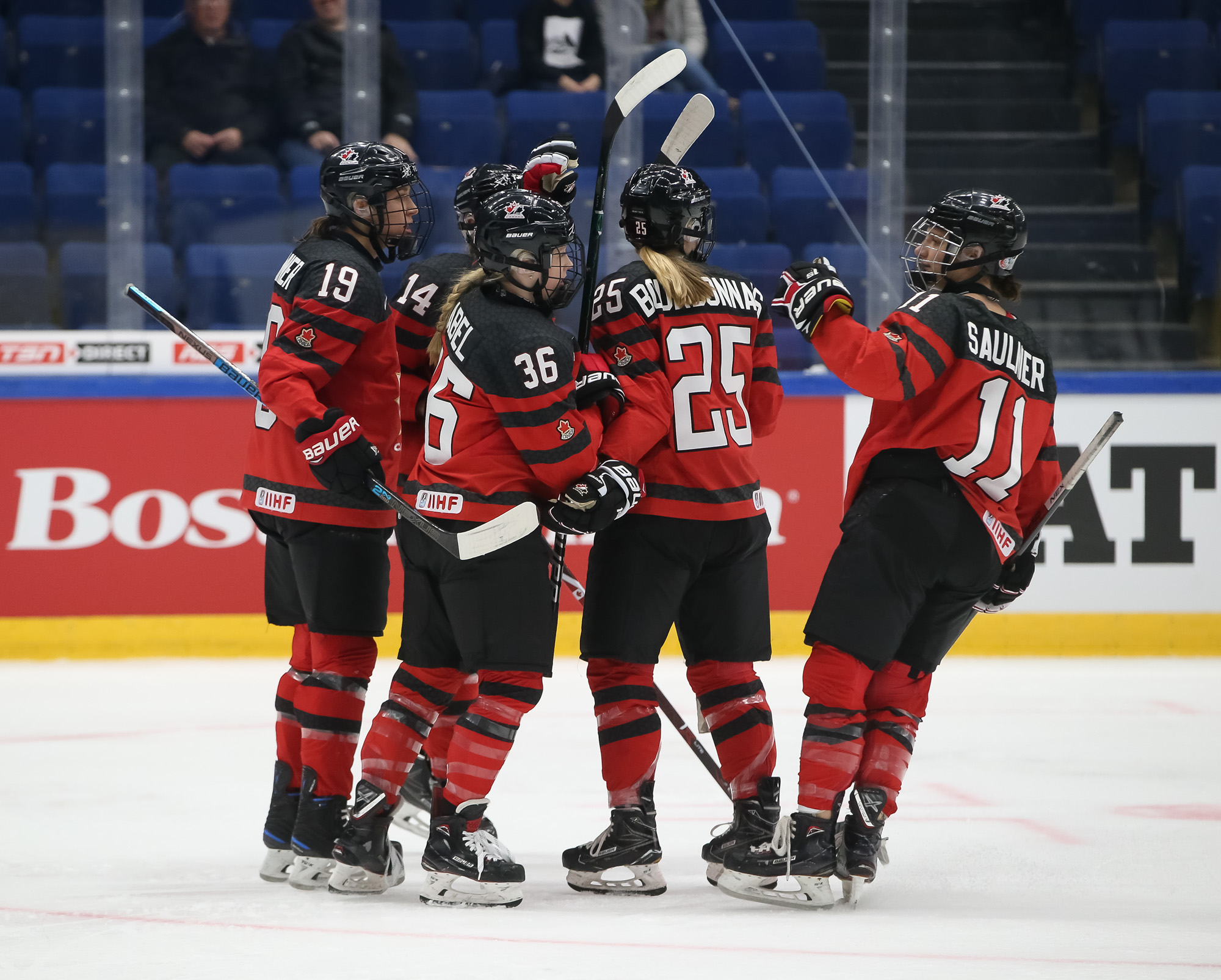 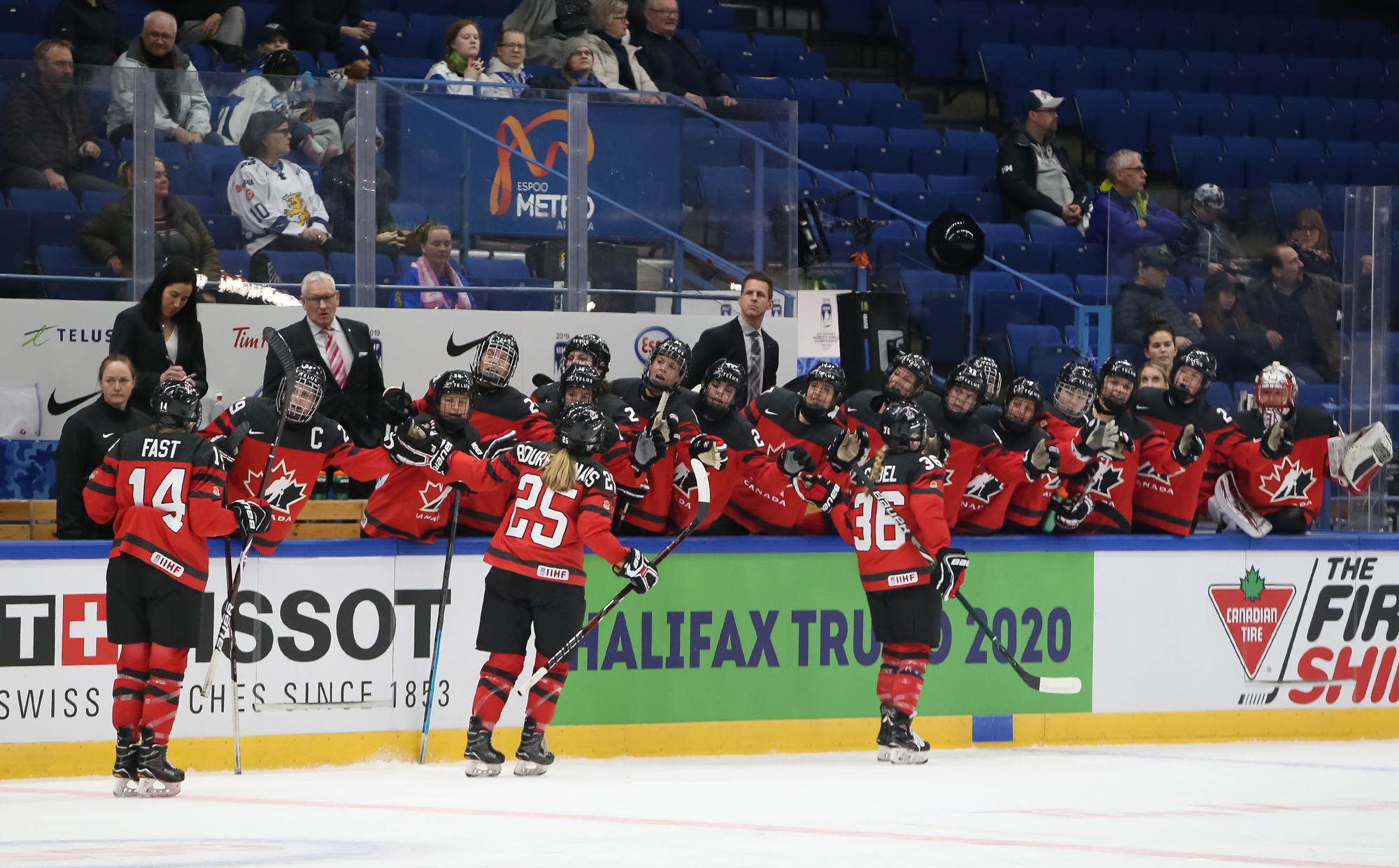 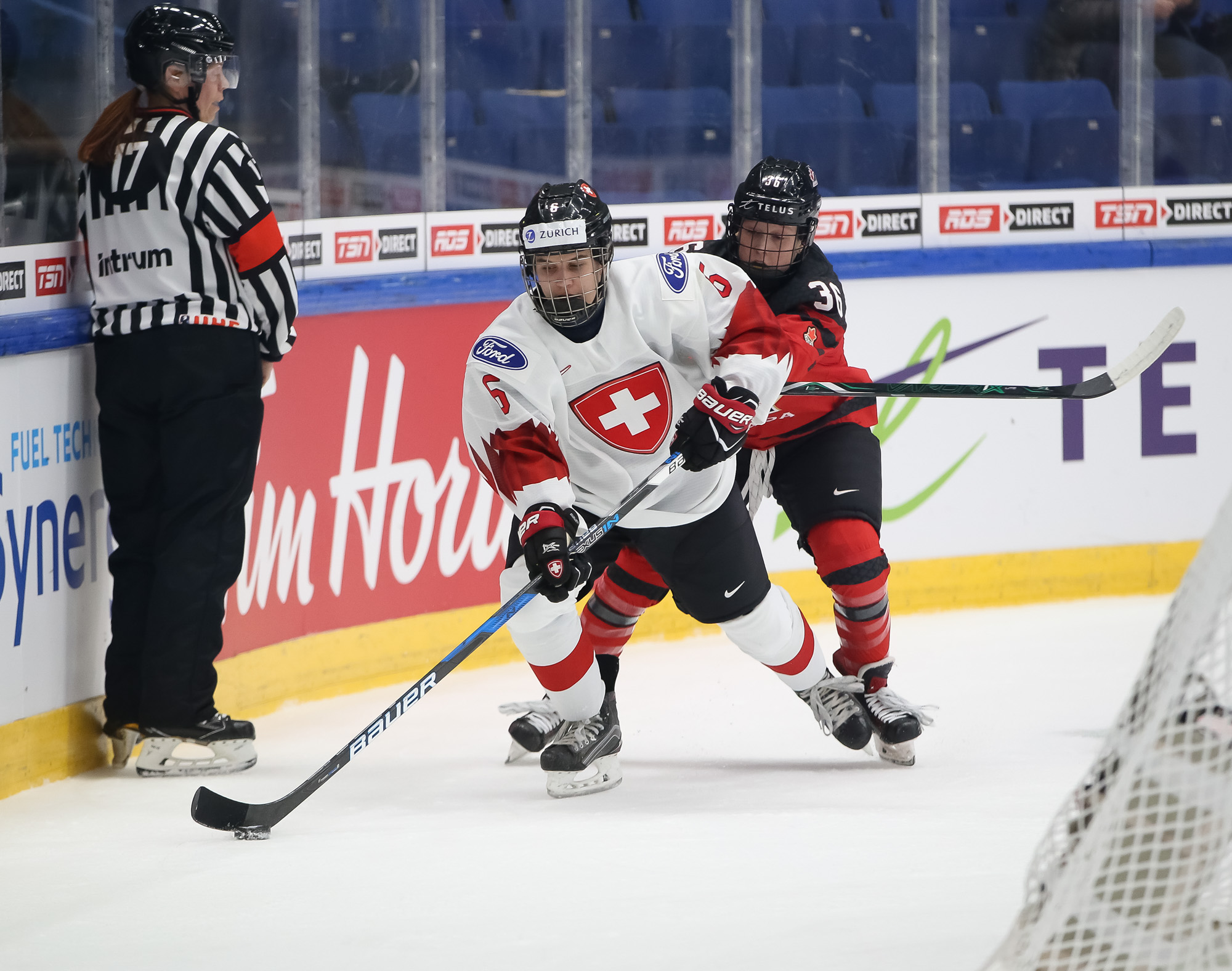 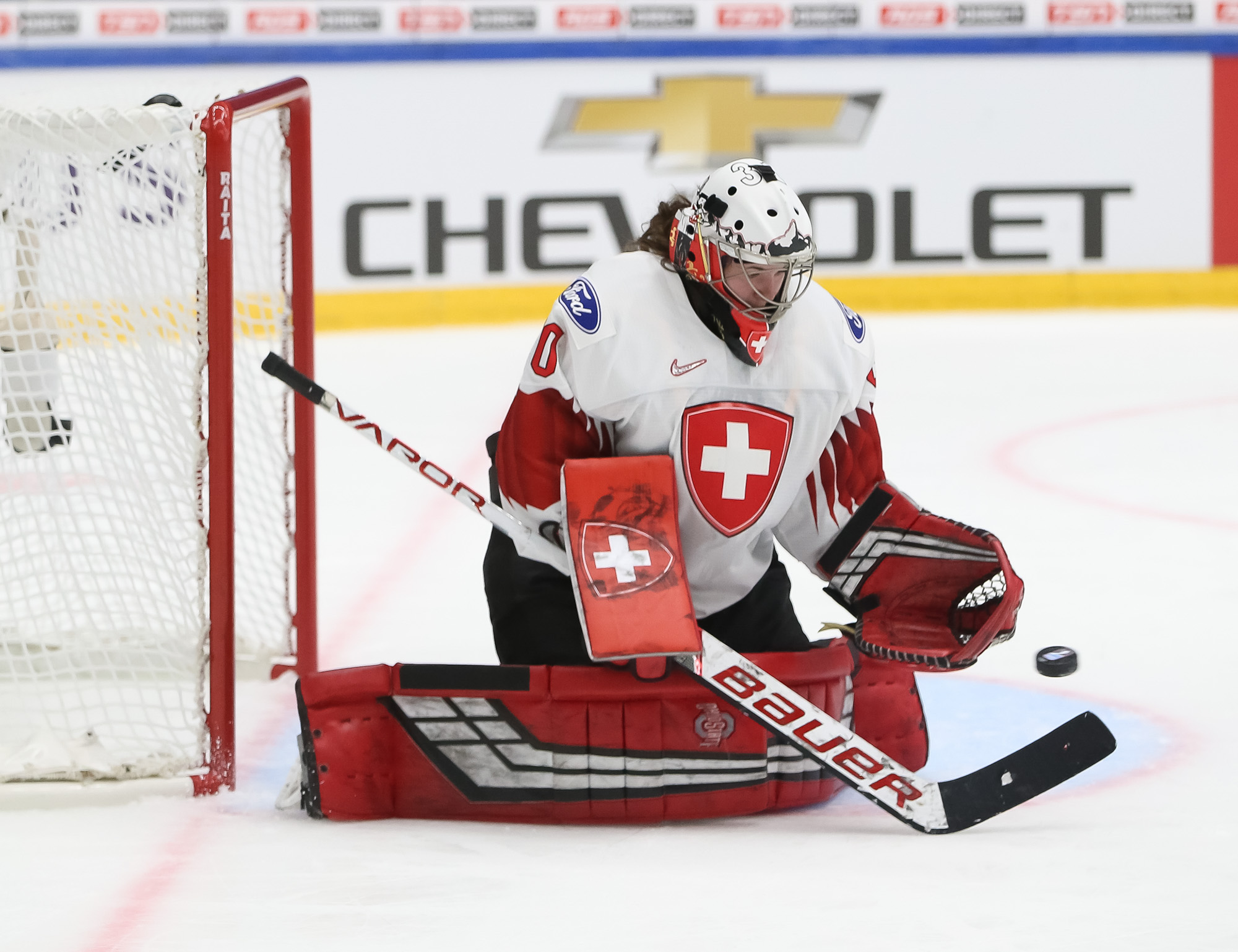 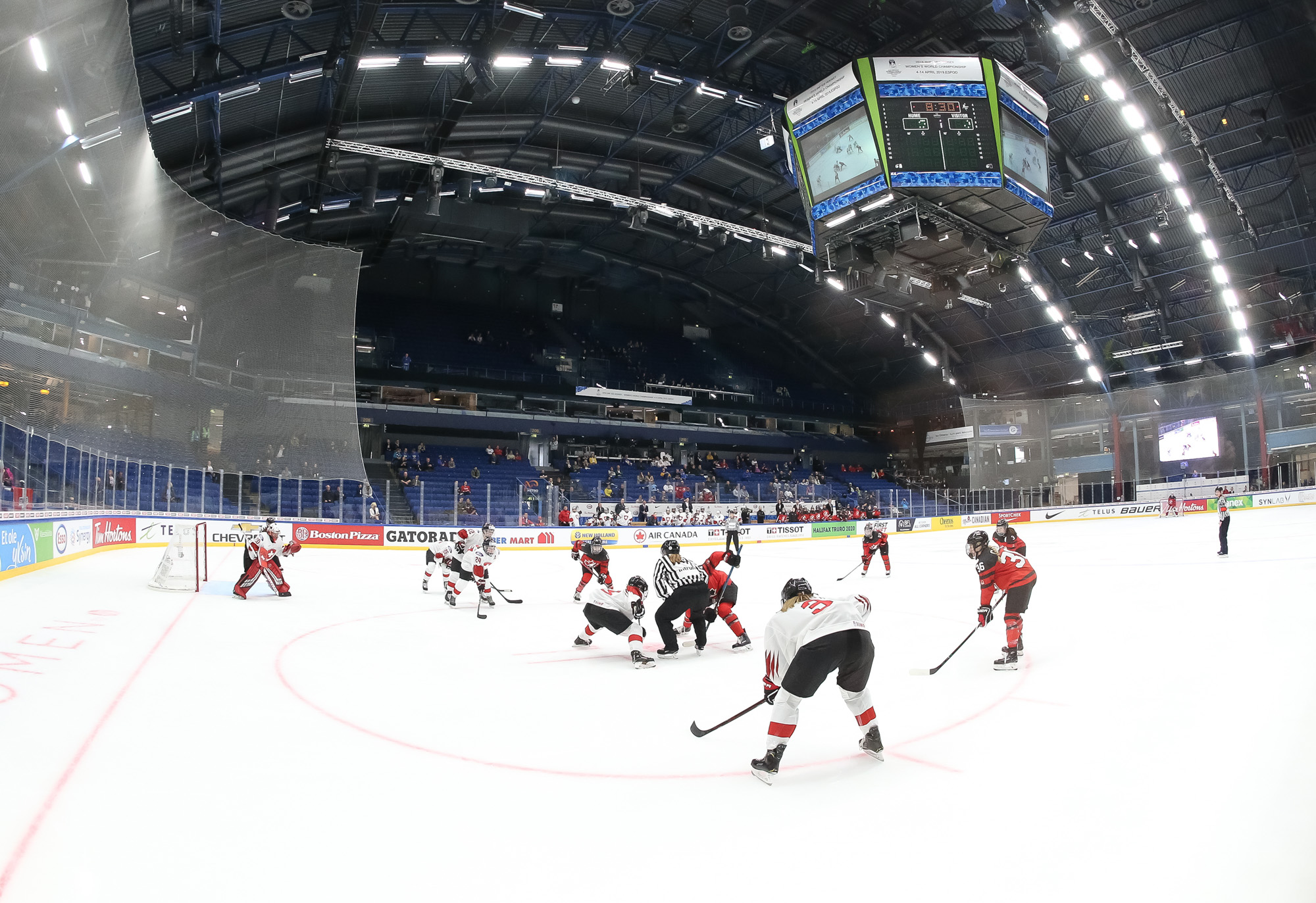 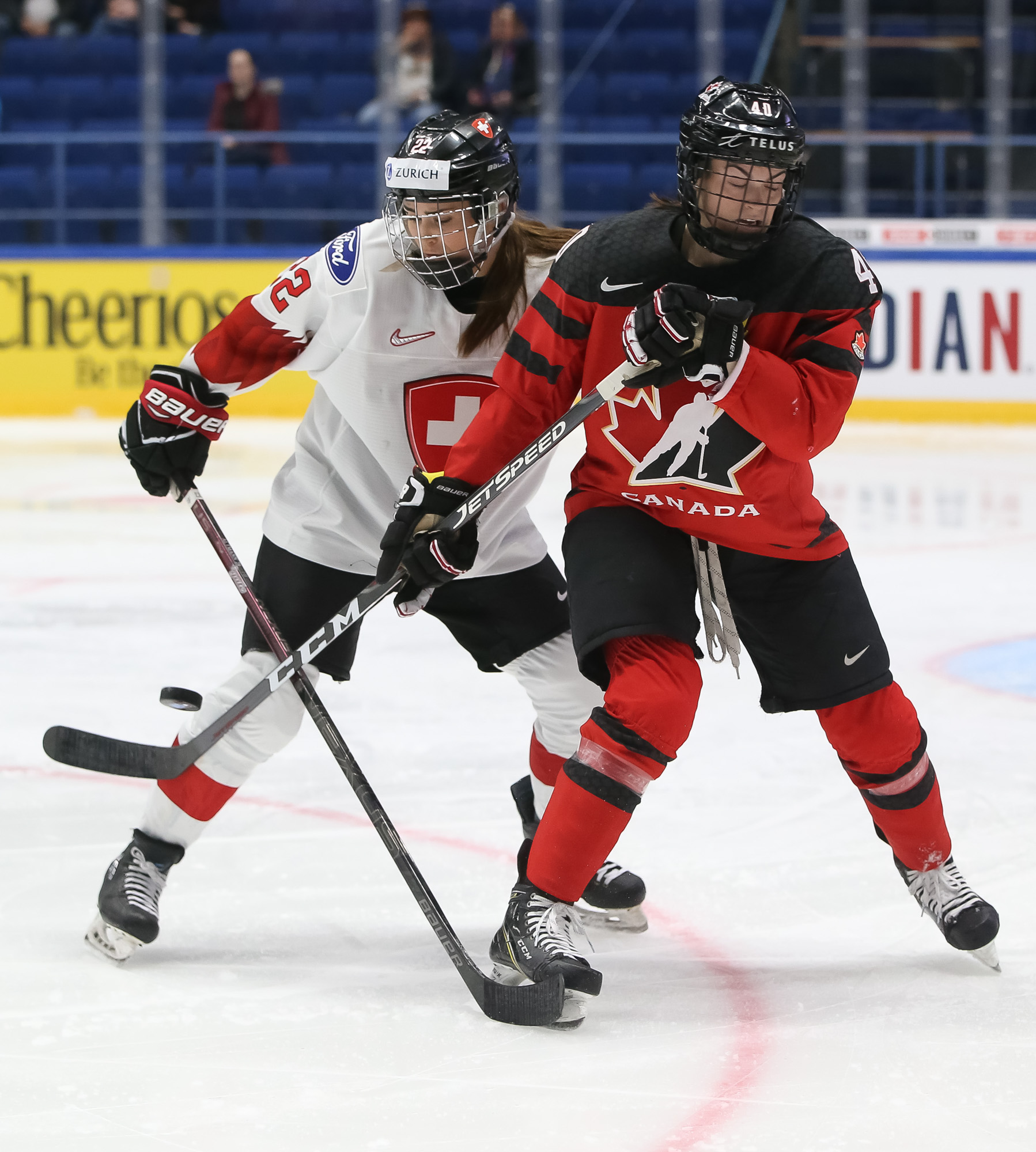 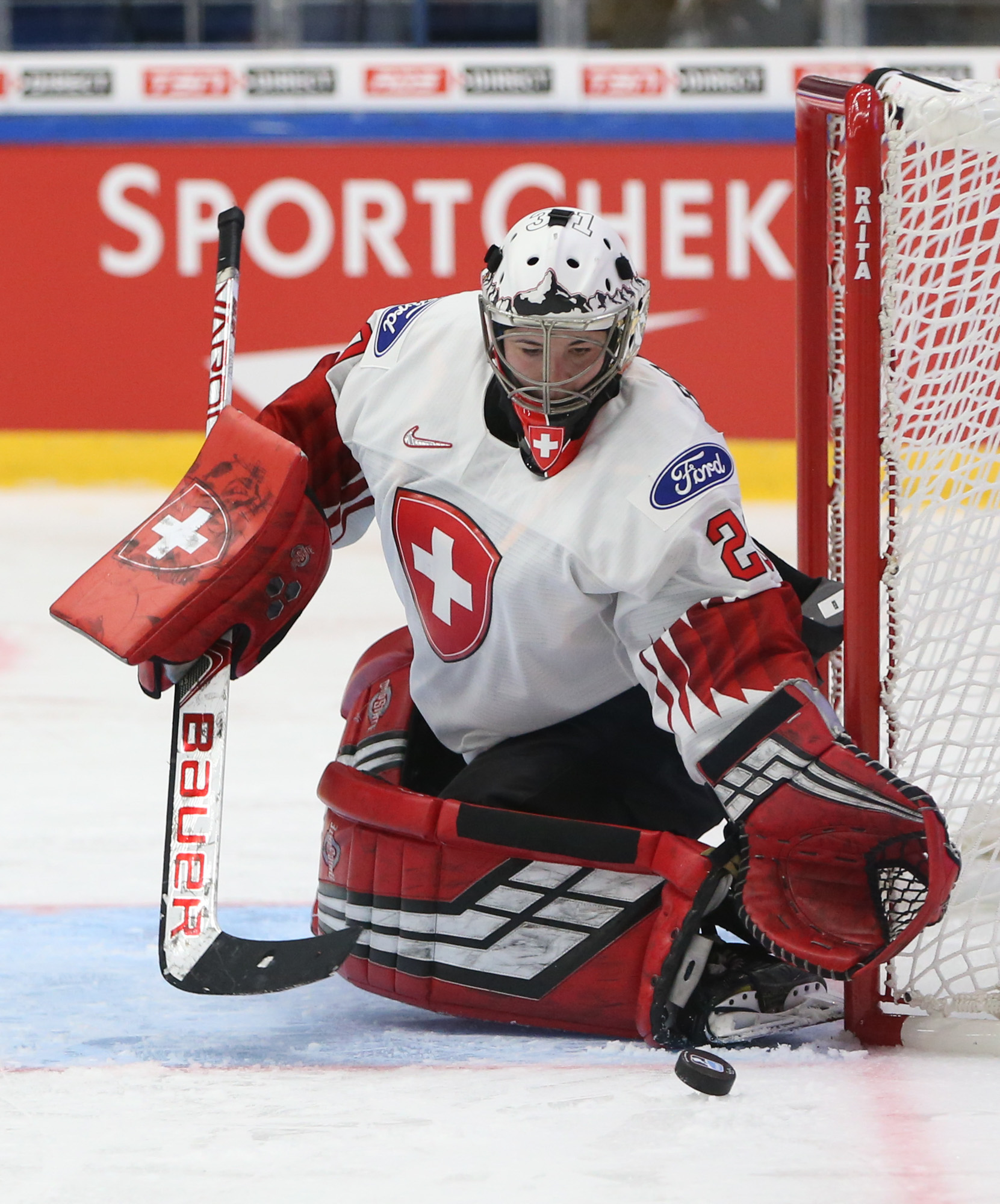 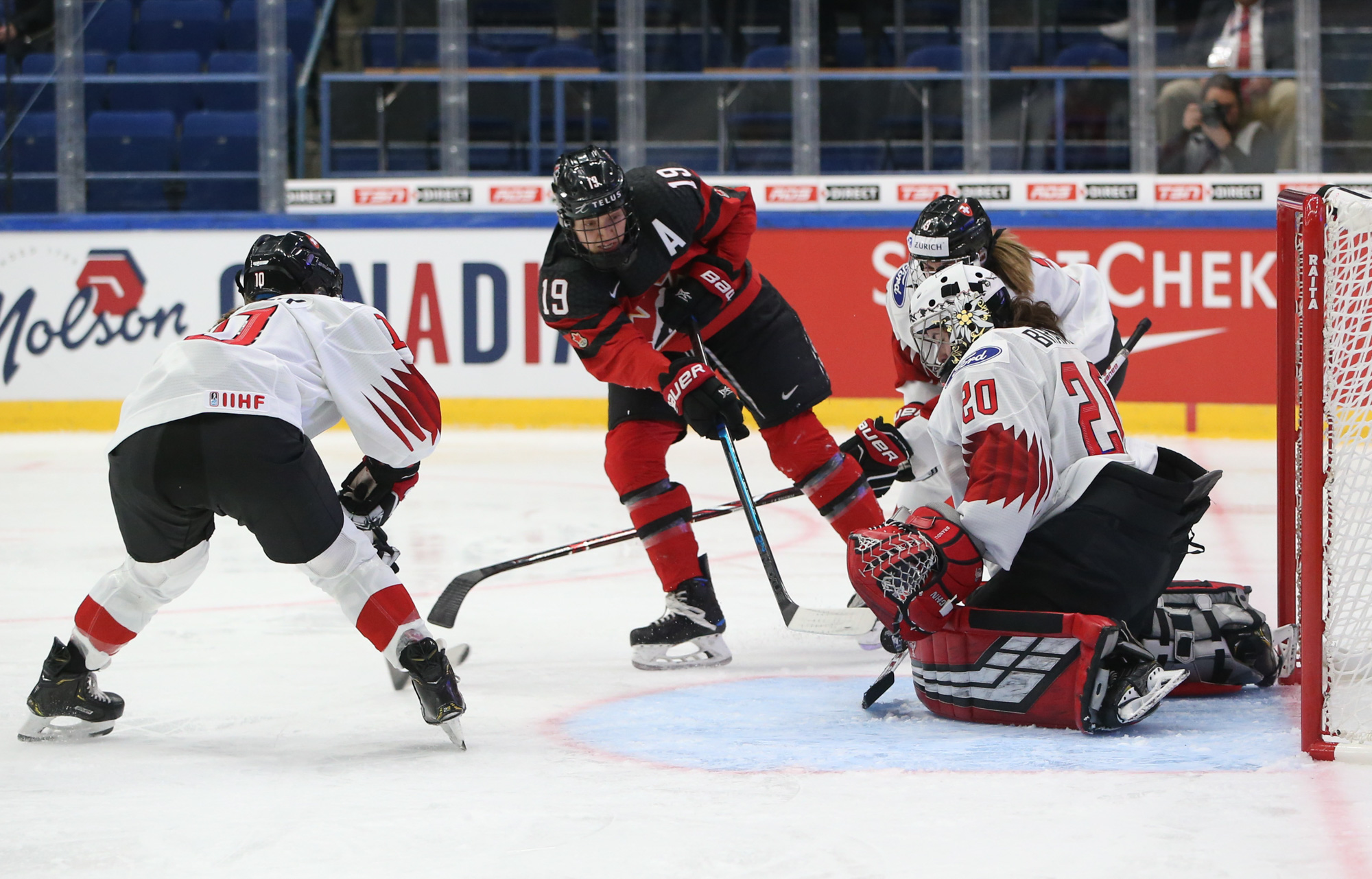 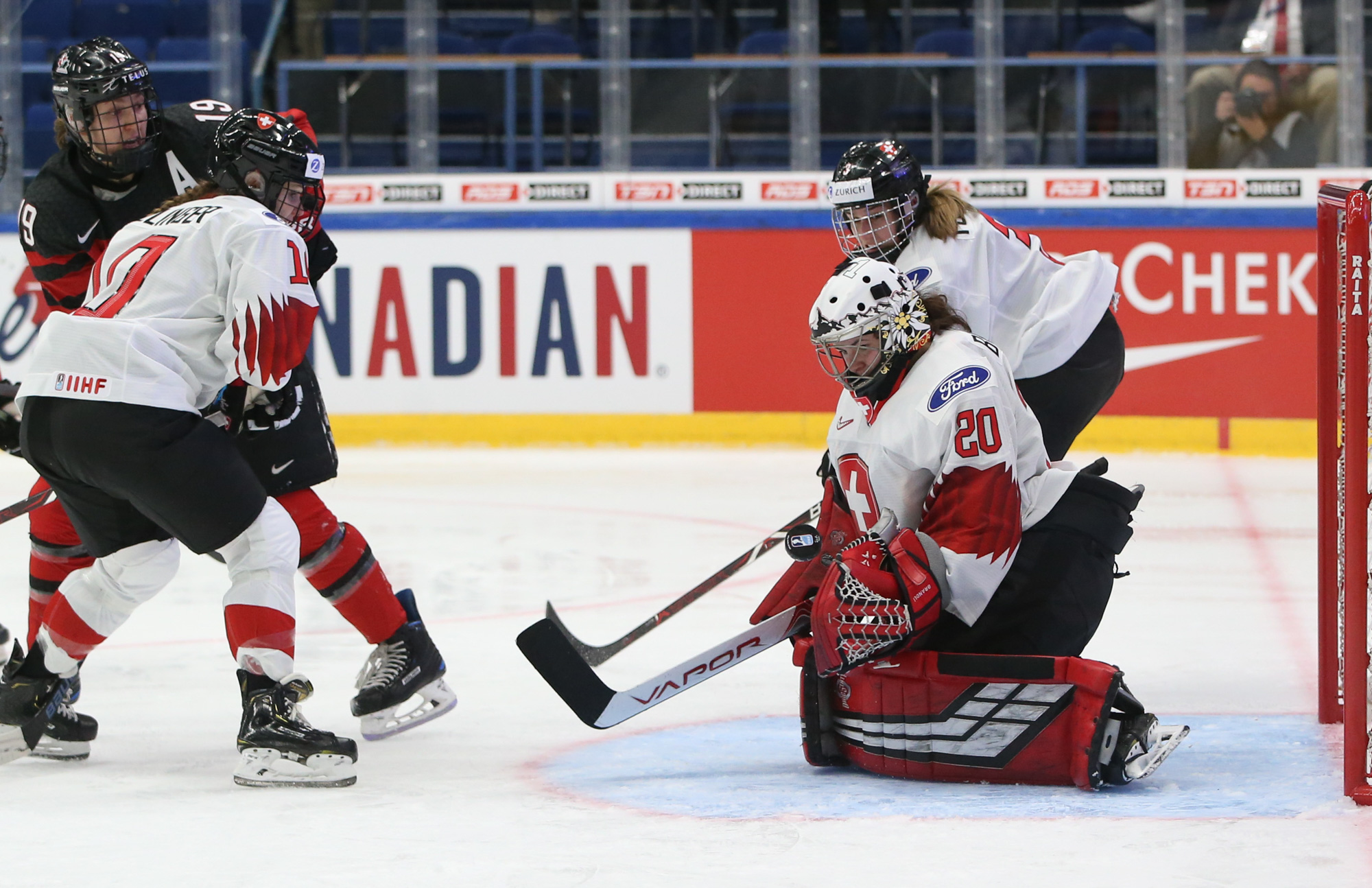 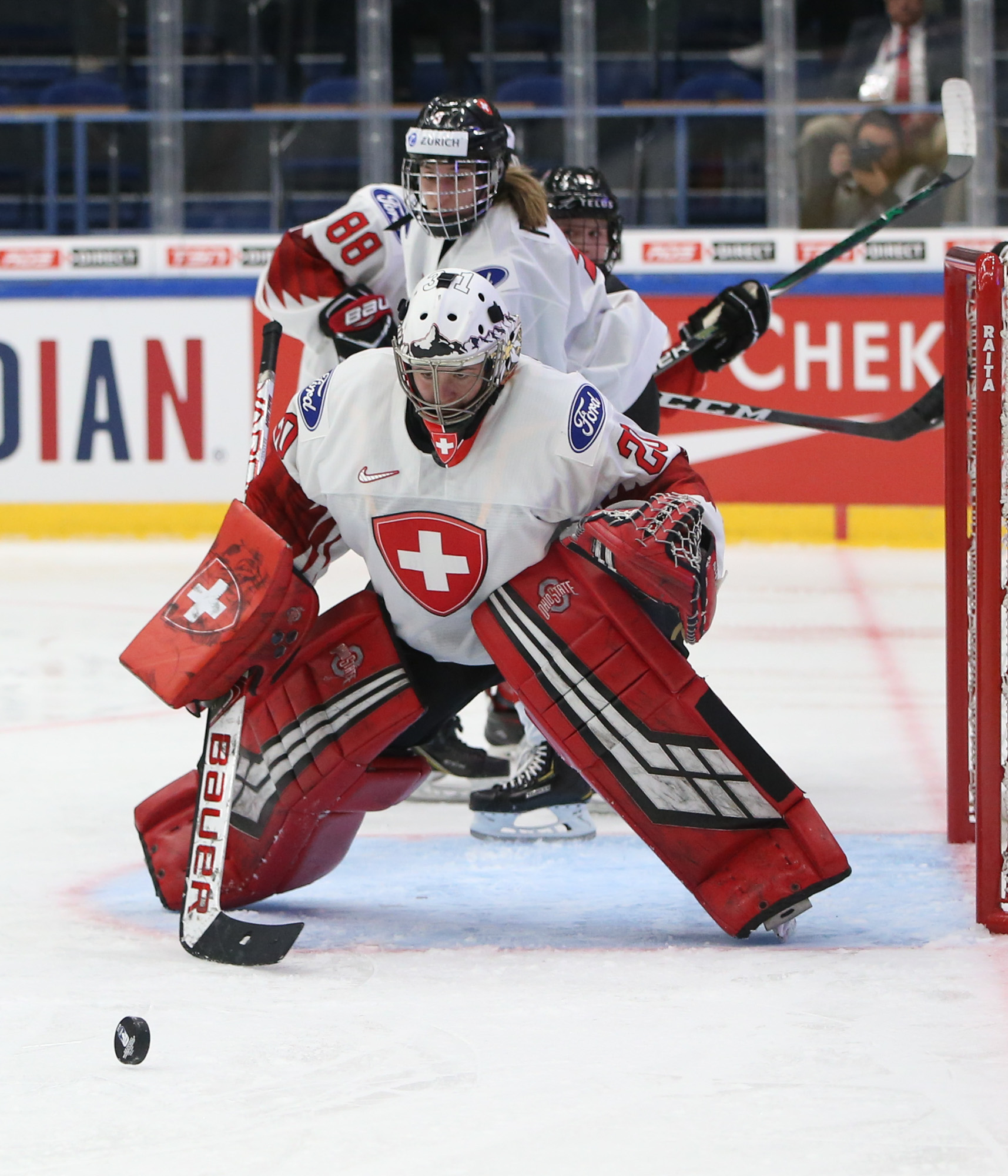 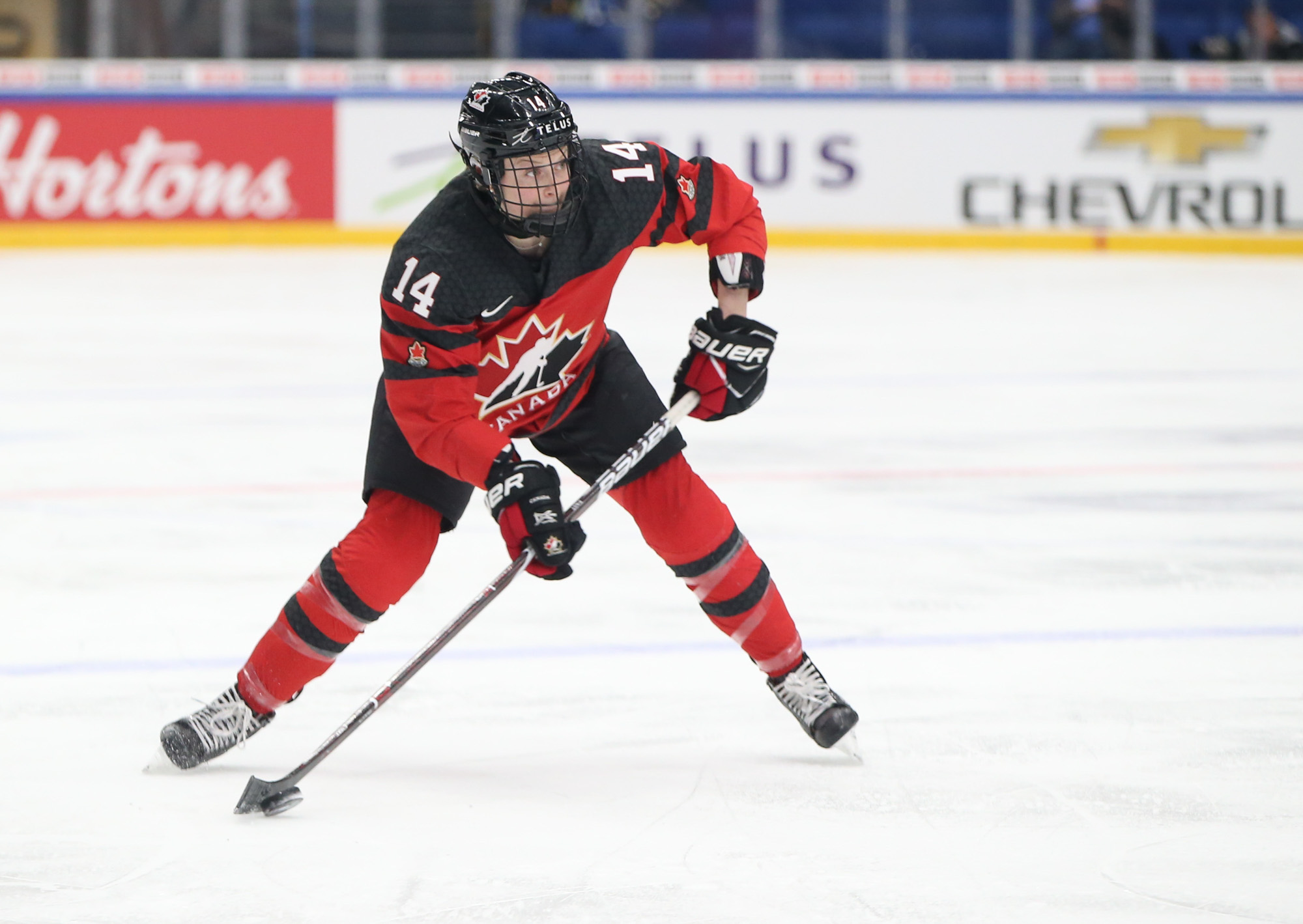 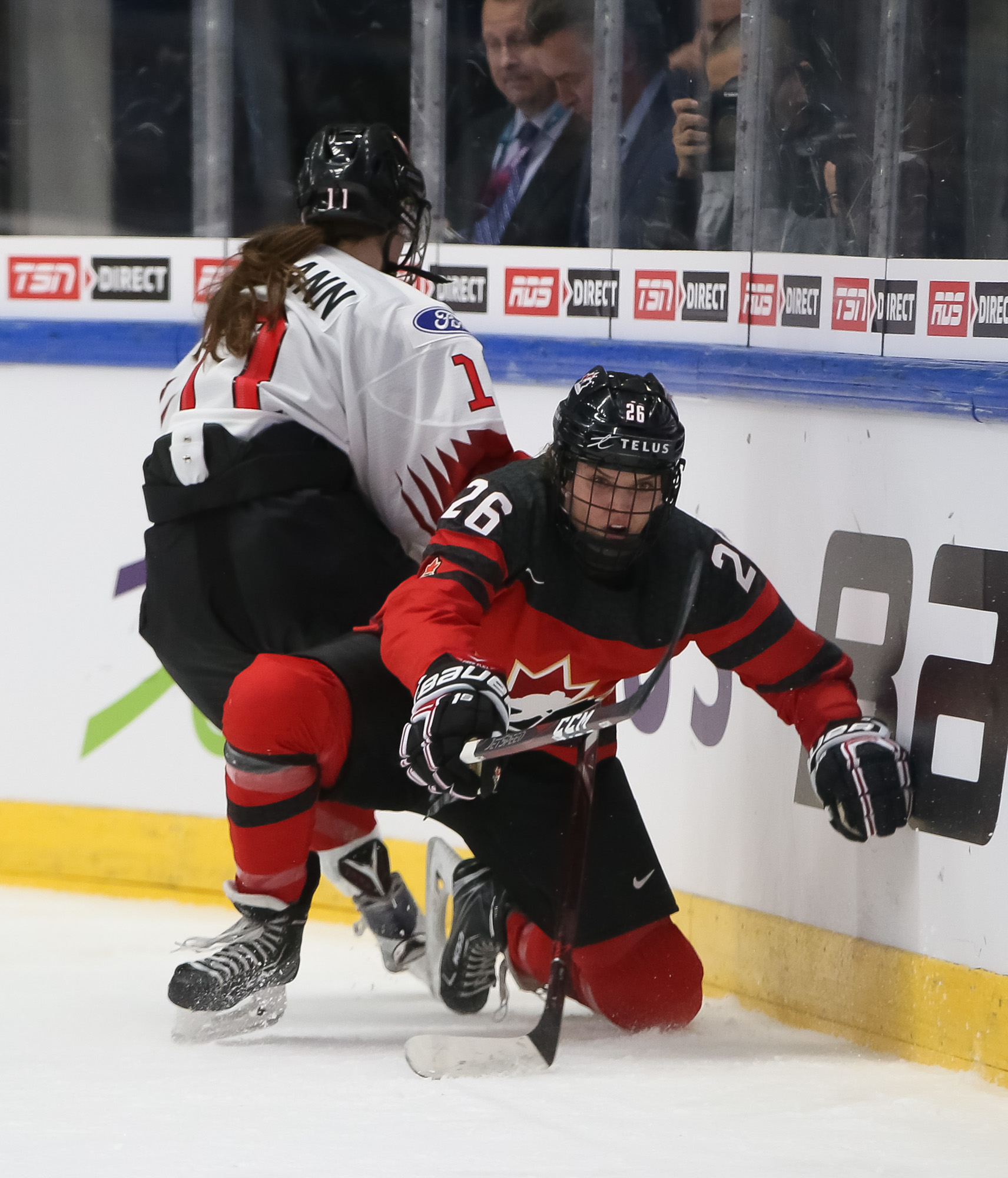 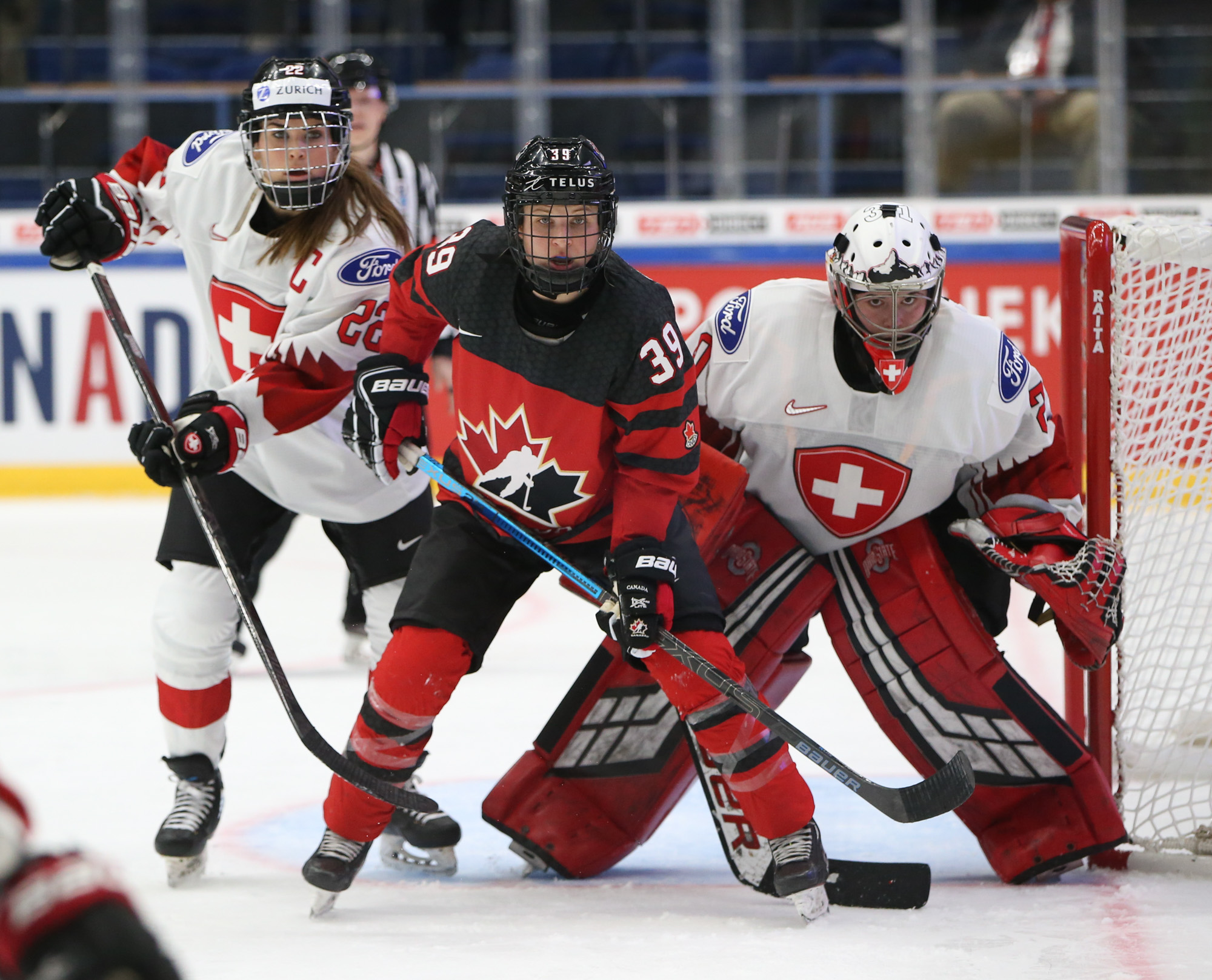 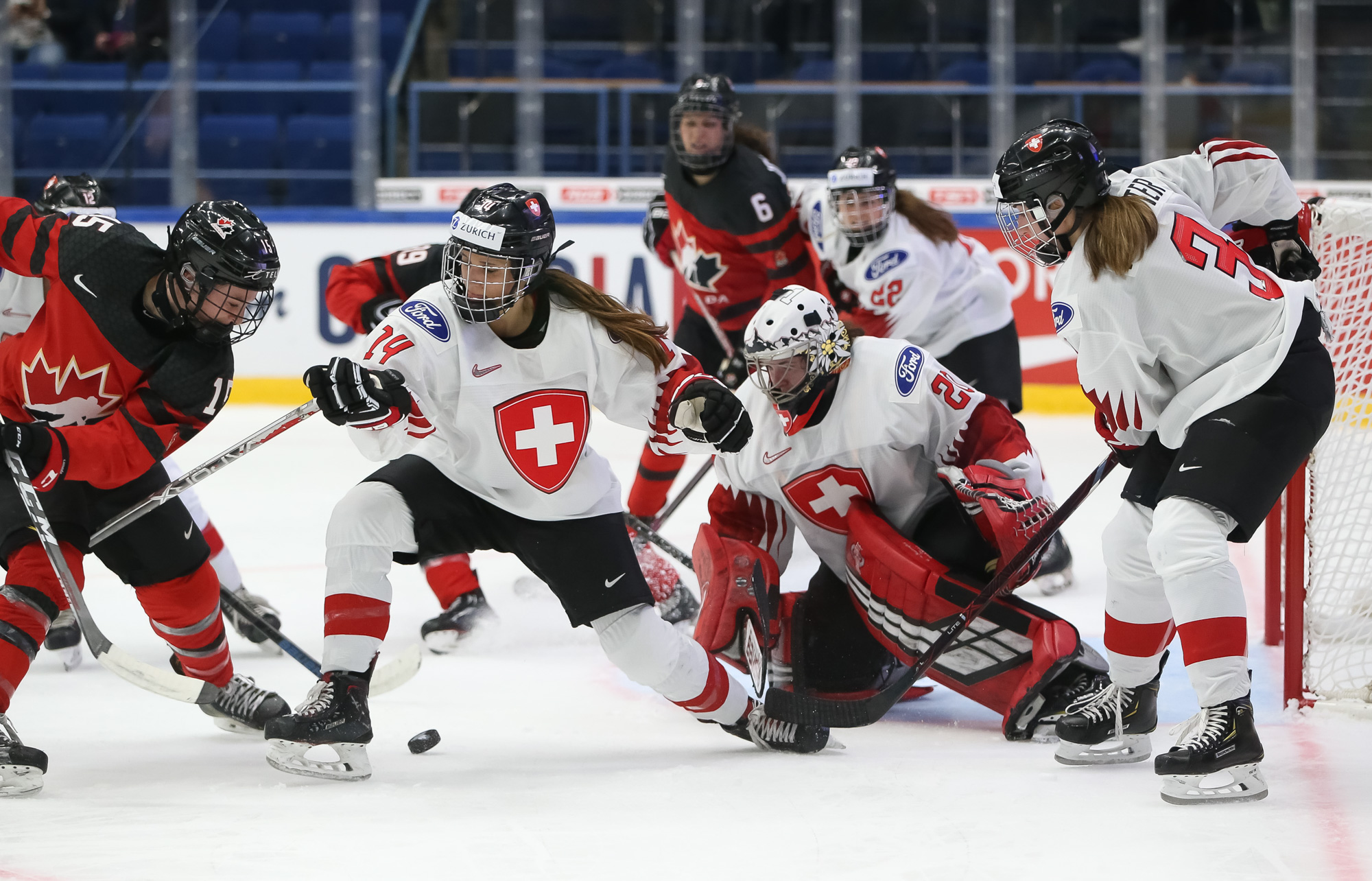 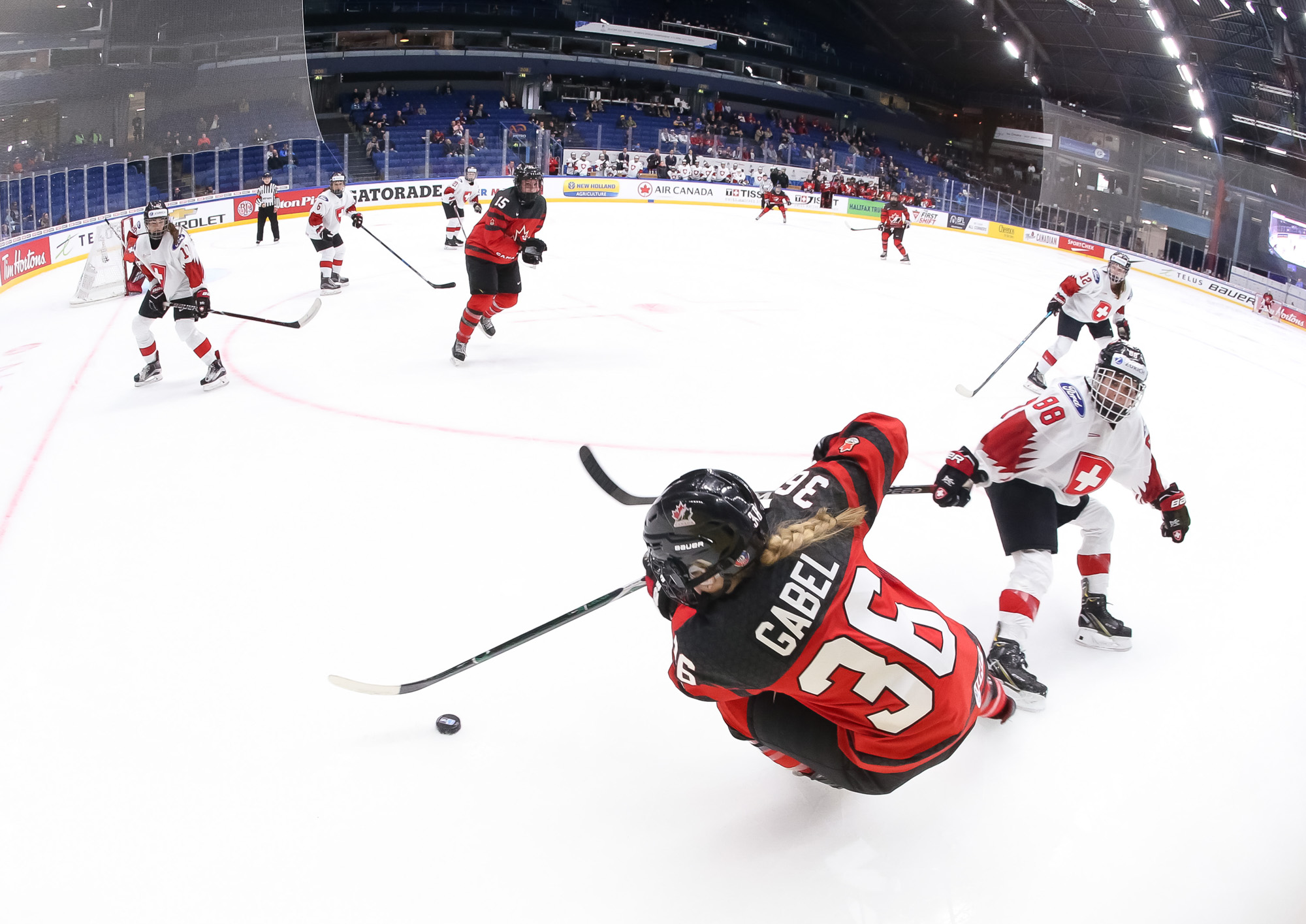 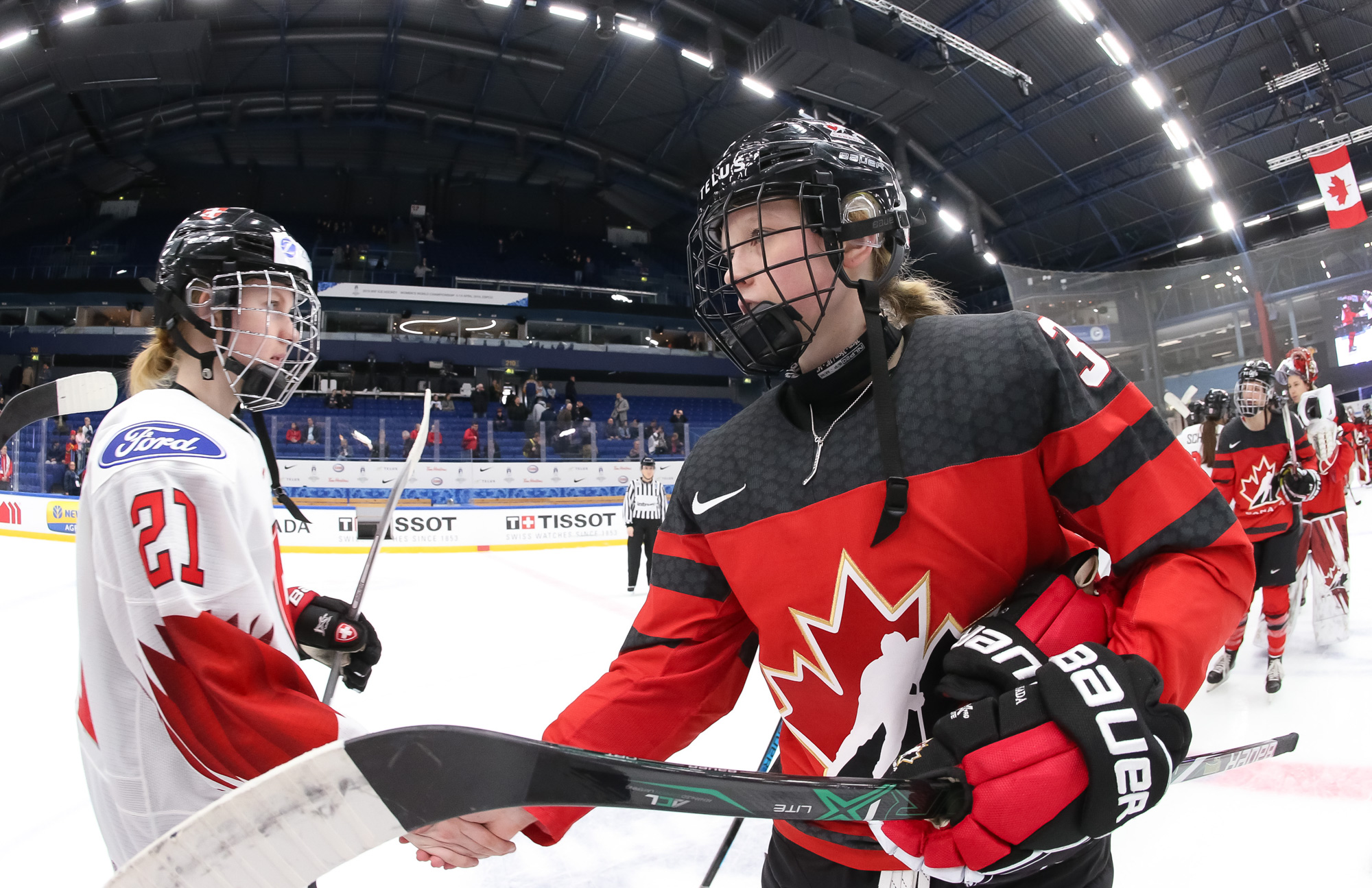 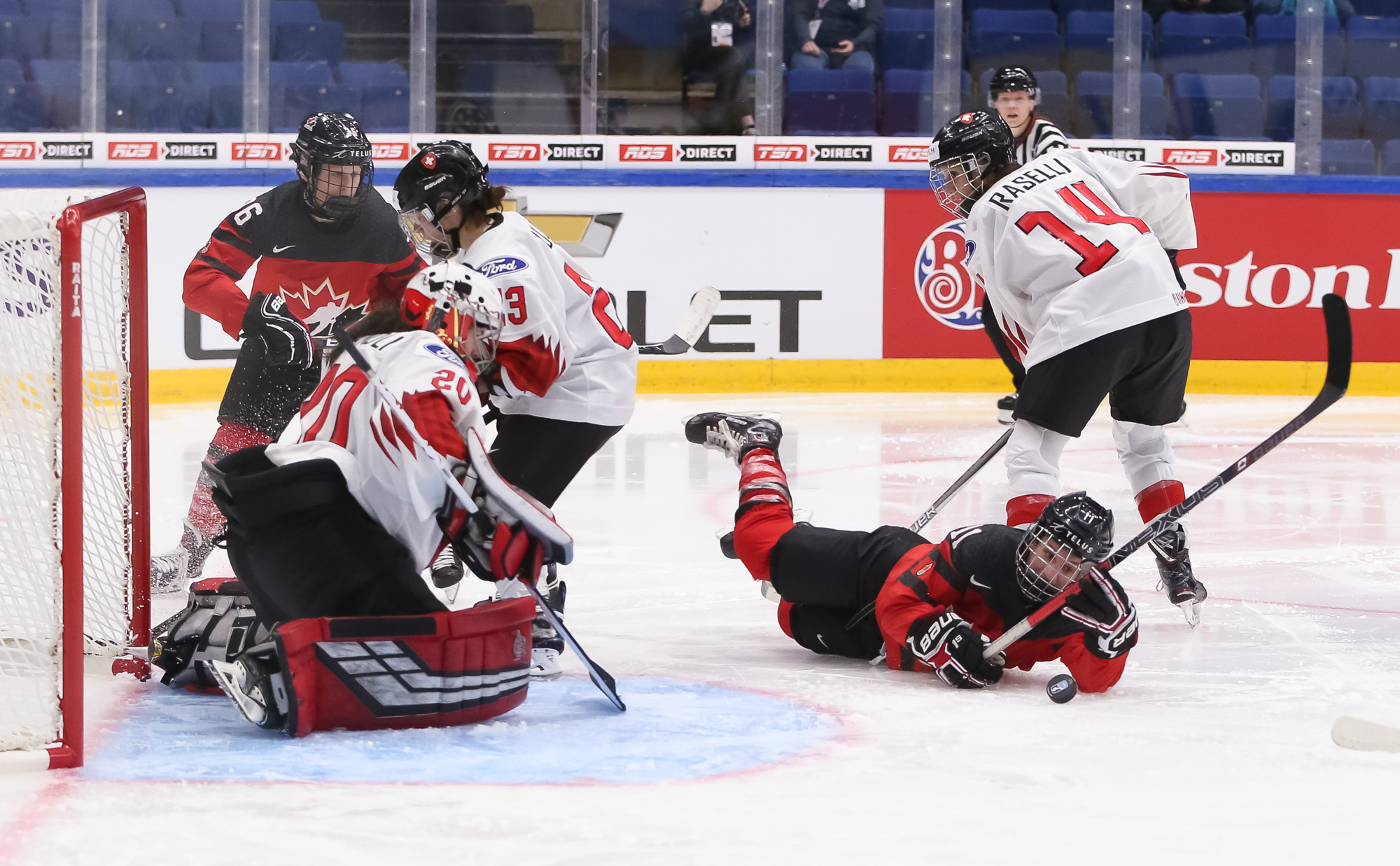 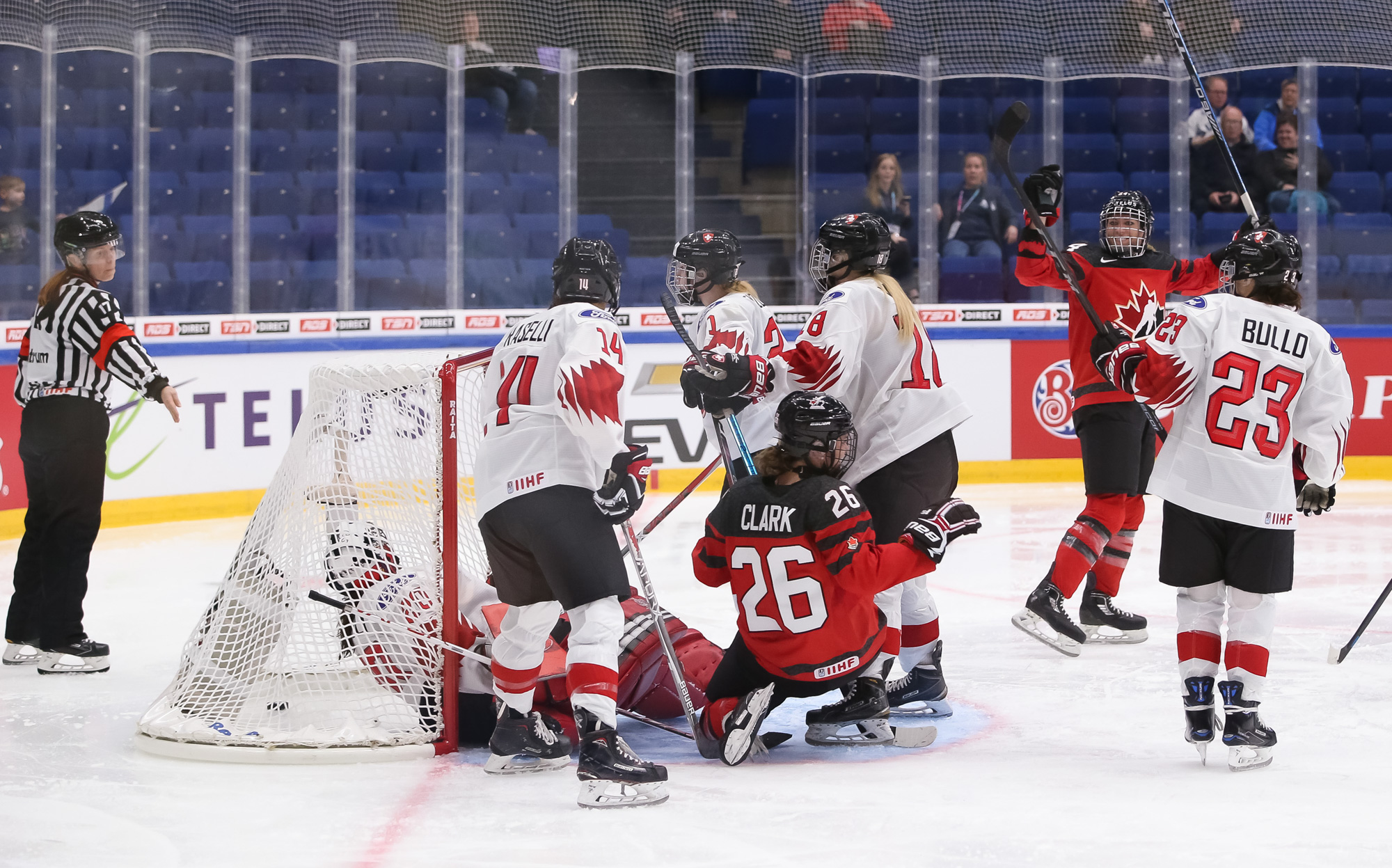 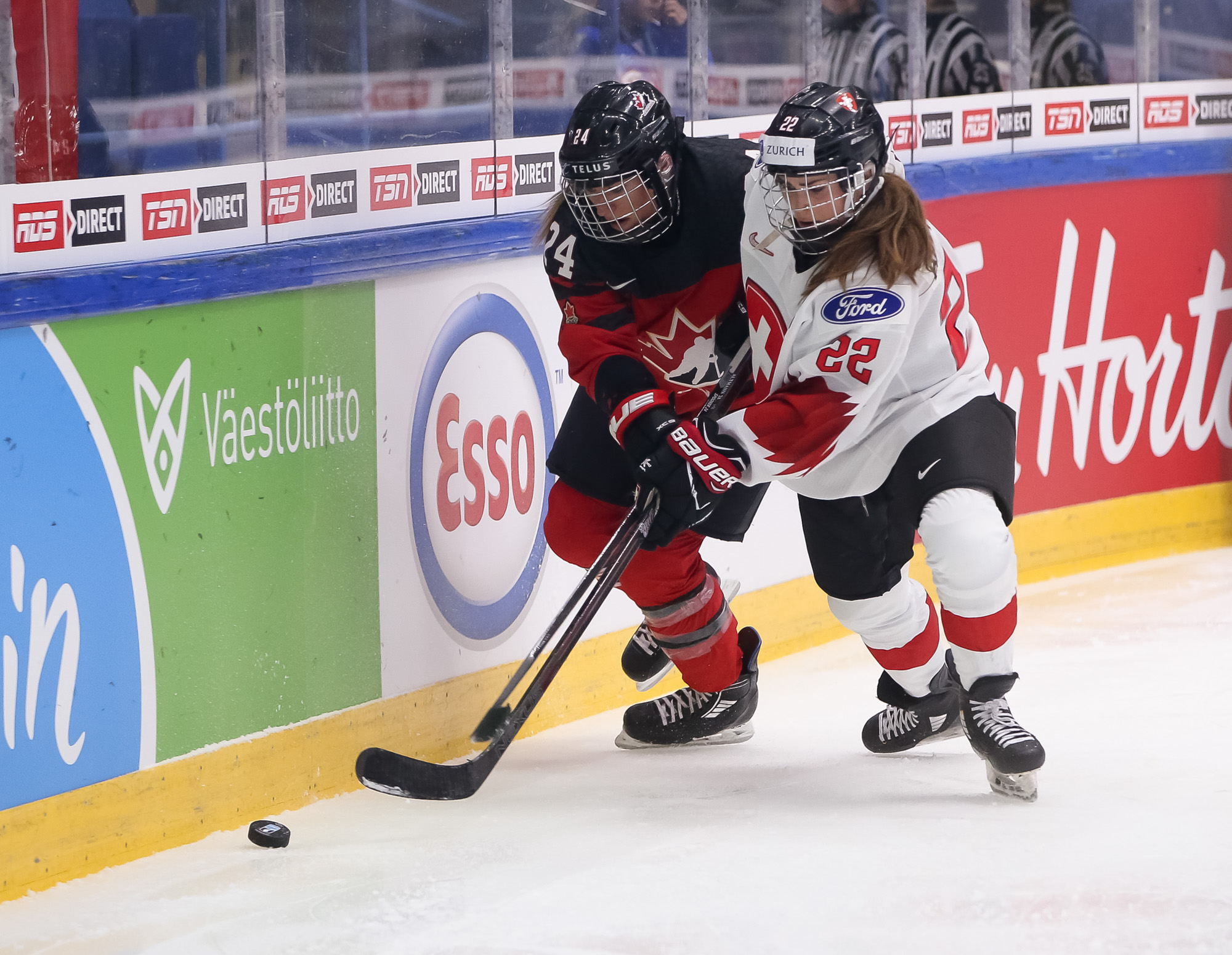 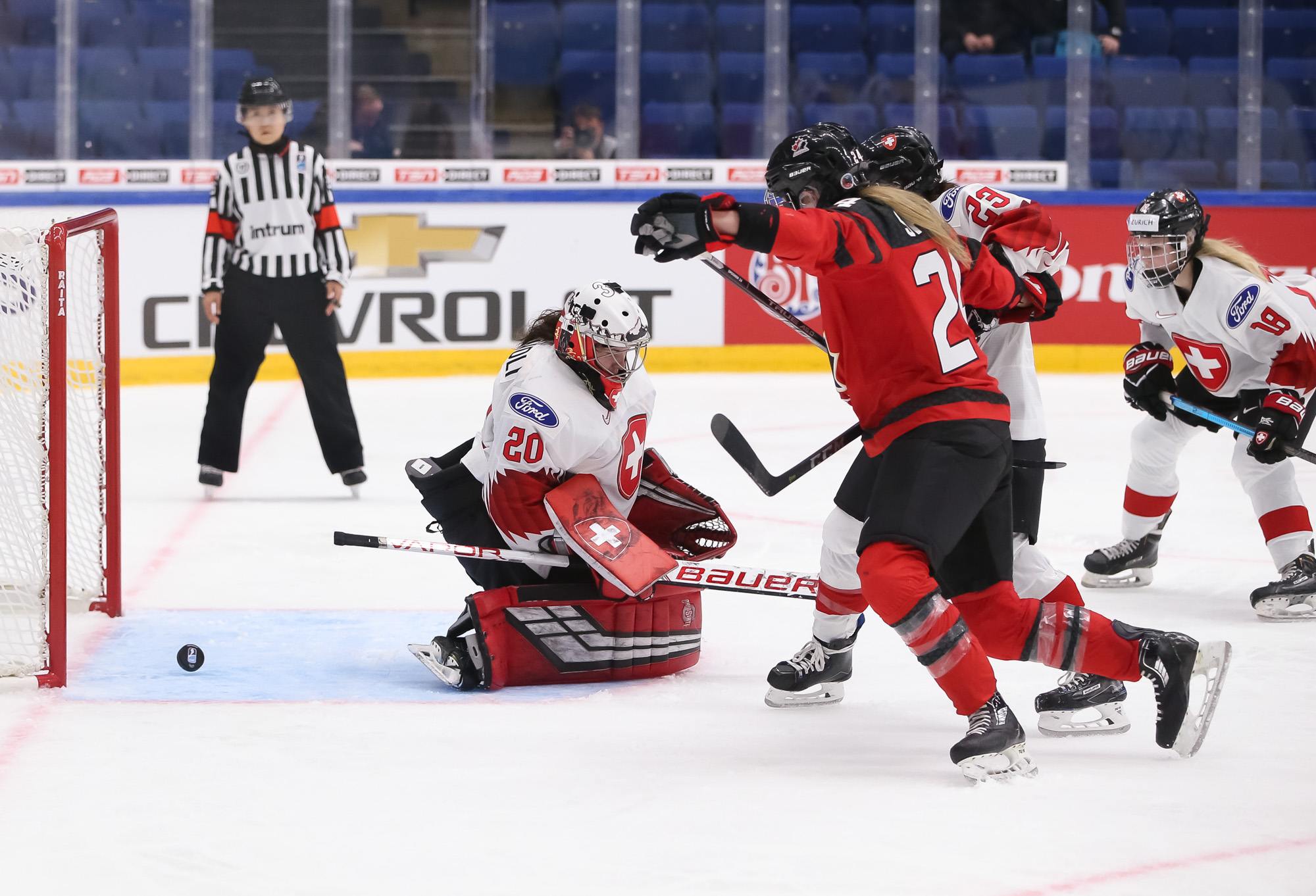 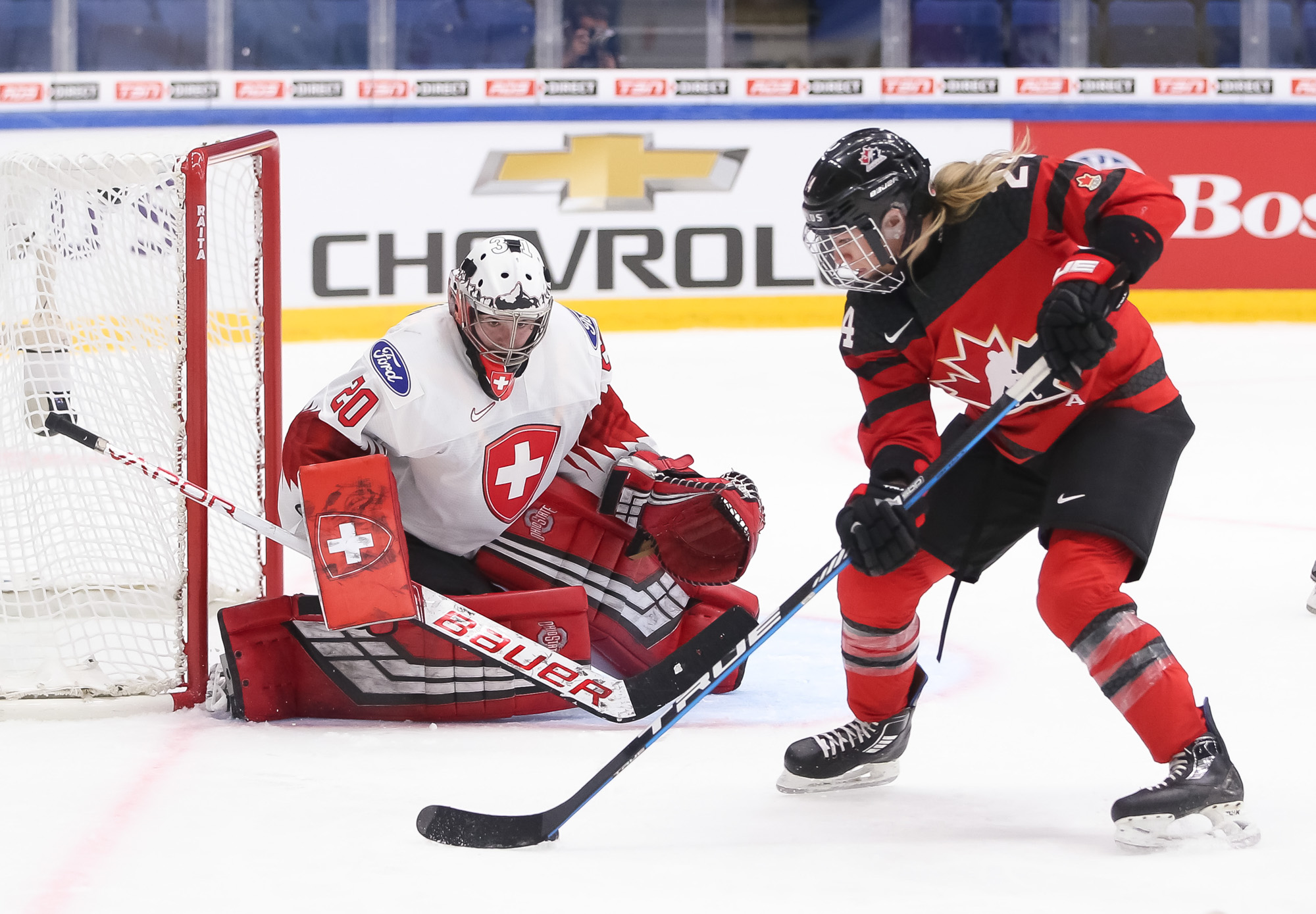 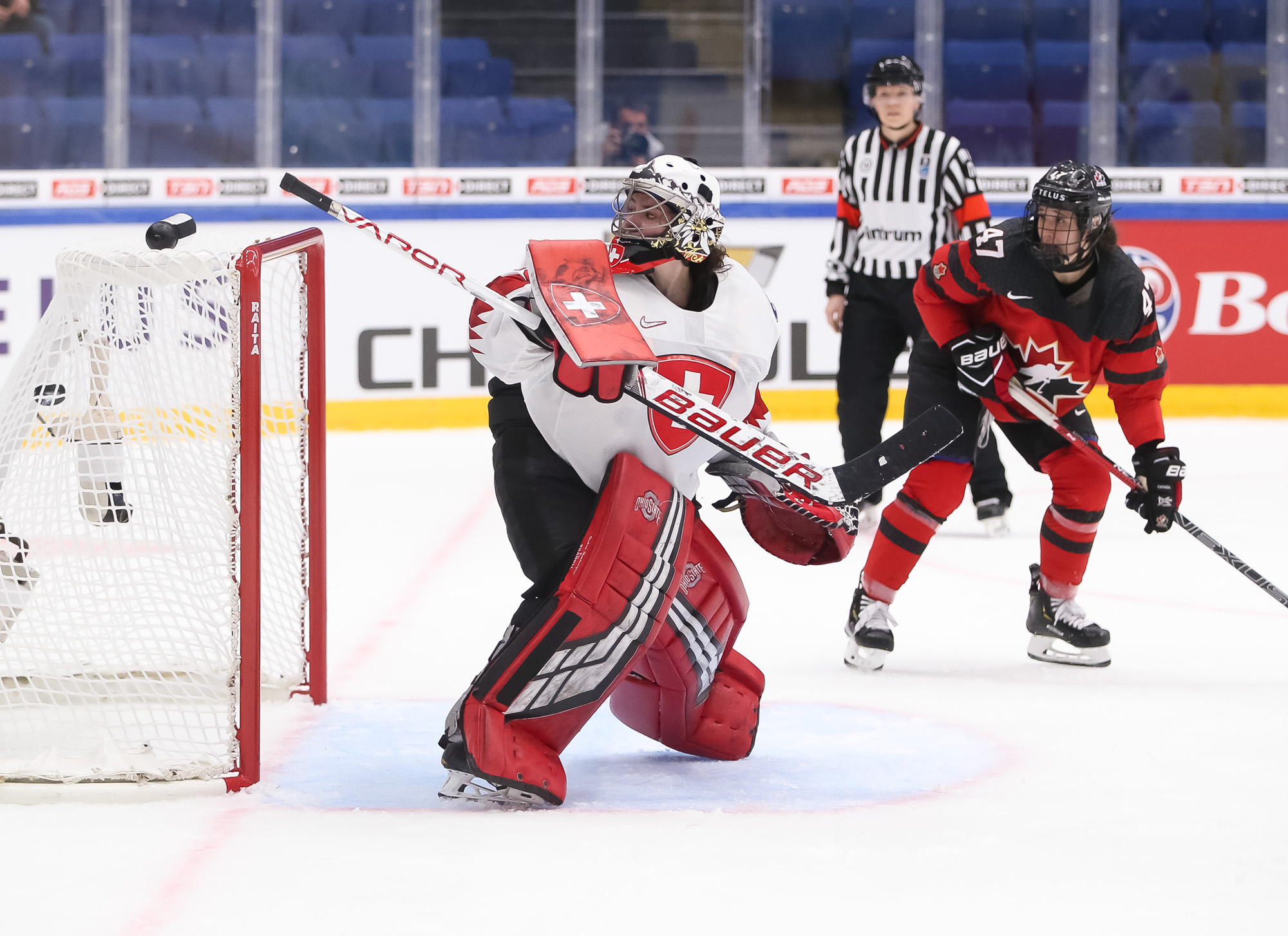 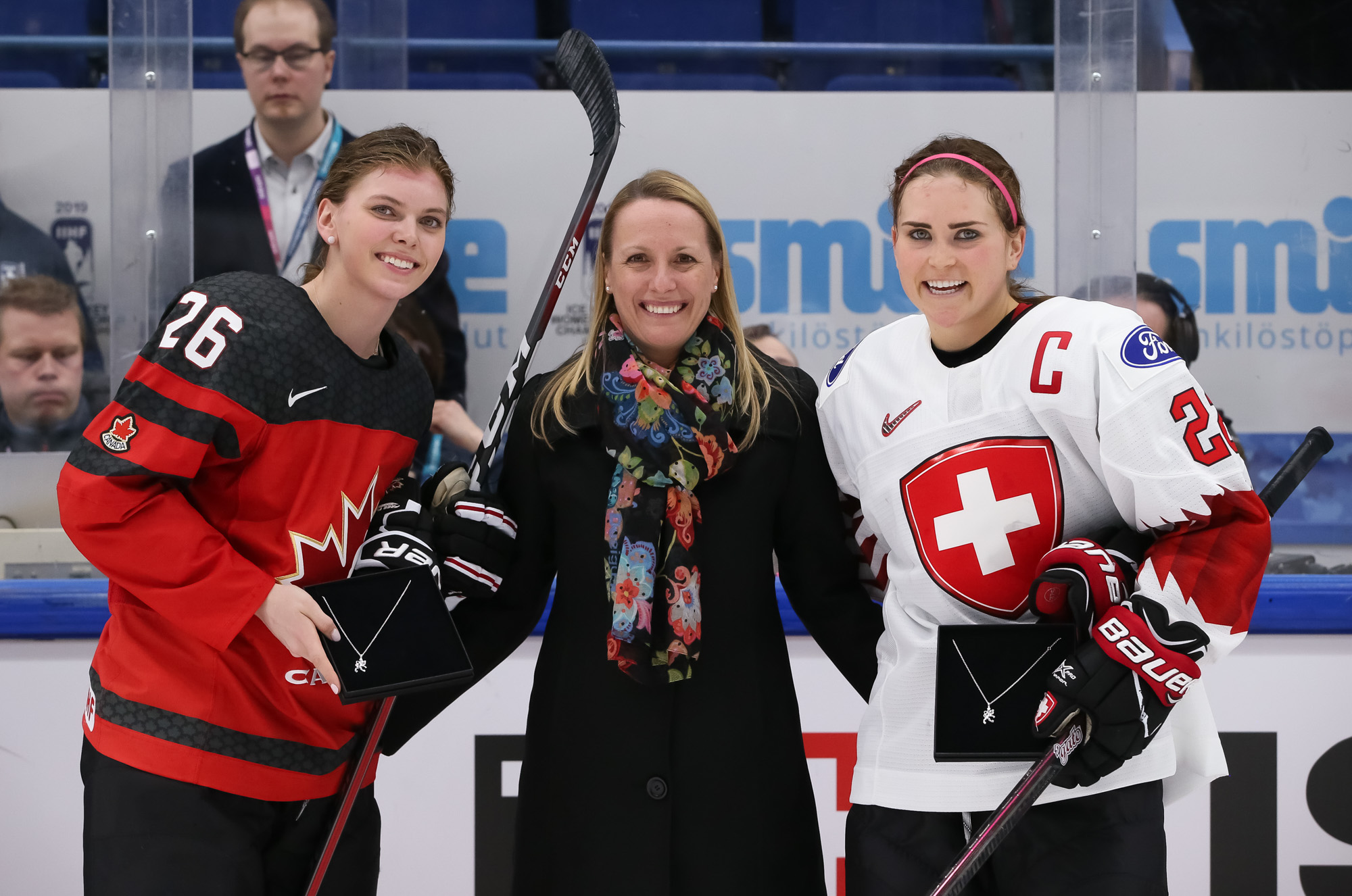 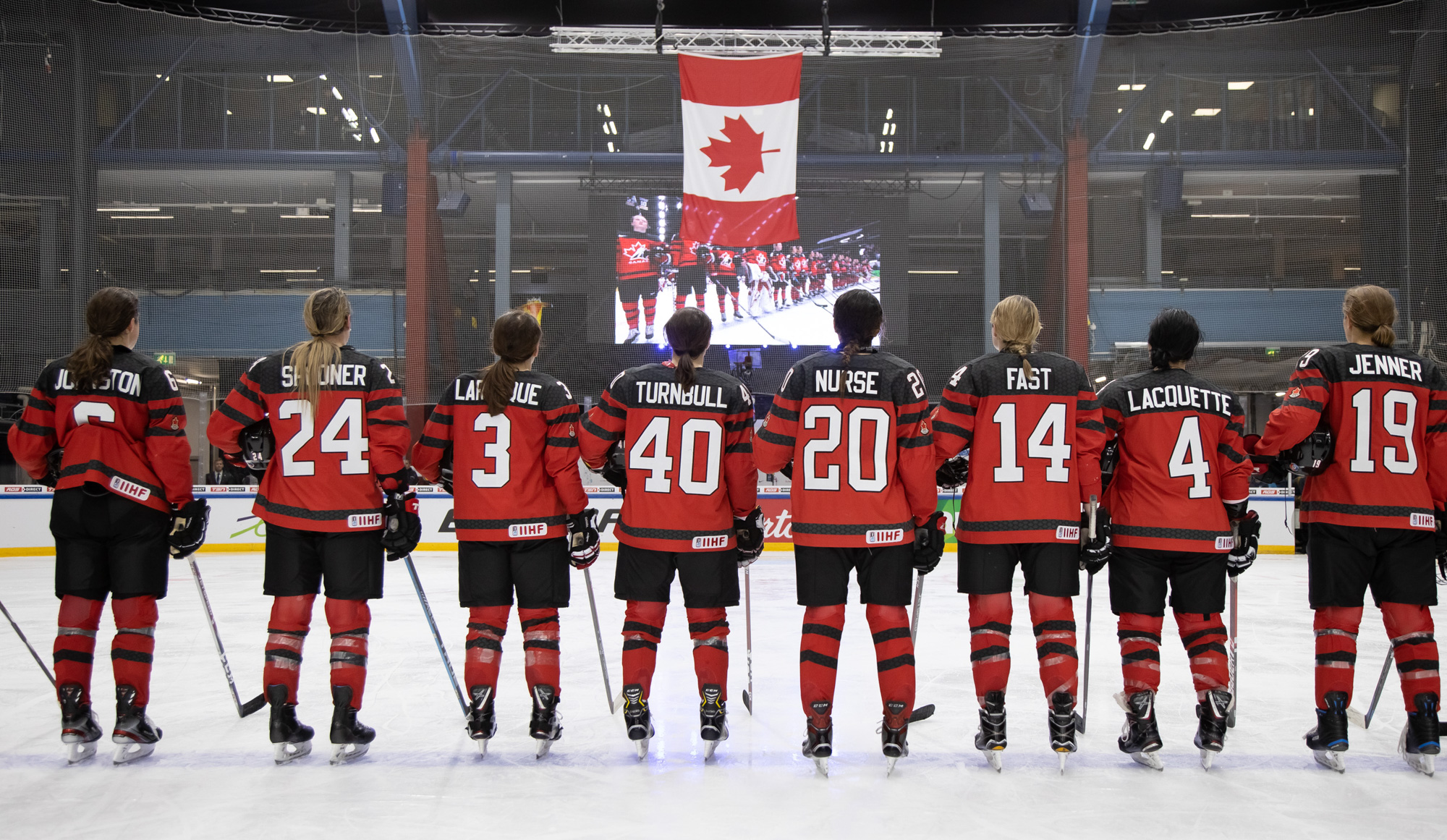 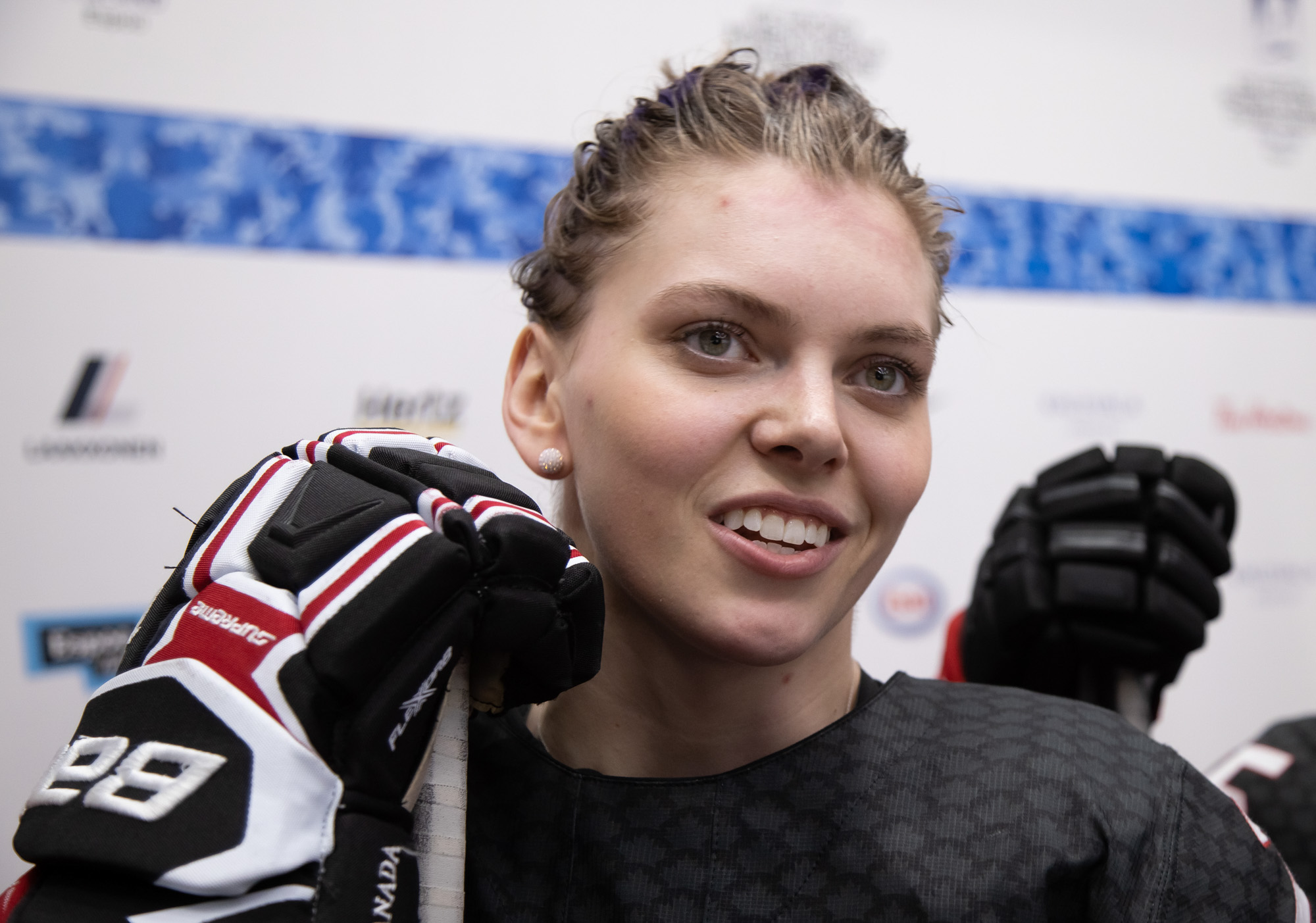 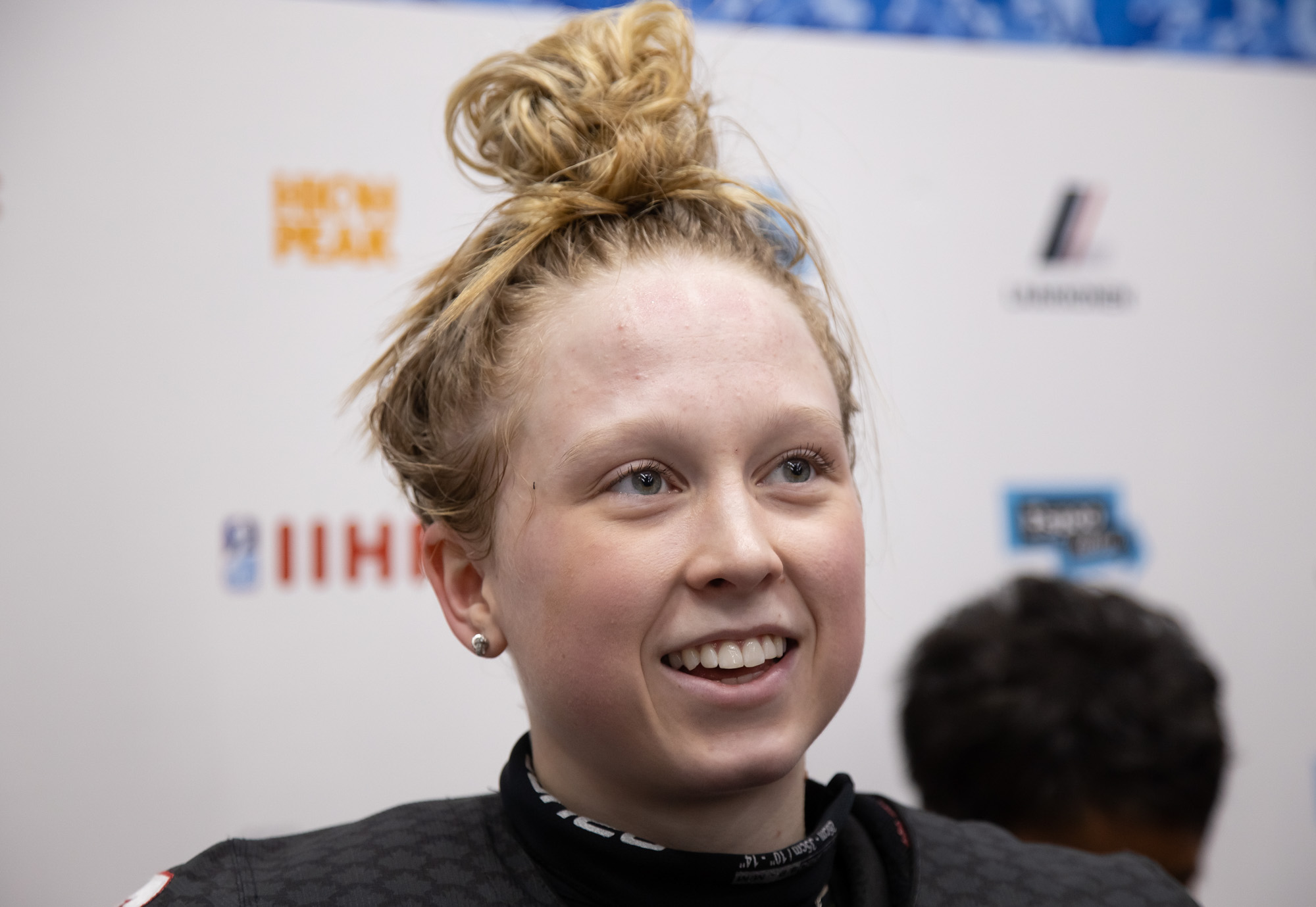