The first official IIHF game between the U.S. and Canada since the 2018 Olympic final lived up to the anticipation. The U.S. prevailed 3-2 as Annie Pankowski delivered the second-period winner on Saturday night in Espoo in front of 3,102 fans.

"It was just an exciting and great game," said U.S. goalie Alex Rigsby, who made 31 saves. "I think it's always fun to play against Canada and to come out on top like that was awesome."

In what was mostly likely a showdown for top spot in Group A, Hilary Knight, Kendall Coyne Schofield and Pankowski all scored their second goals of these Women's Worlds for the defending champions.

For Canada, Brianne Jenner and Sarah Nurse replied with a goal and an assist apiece, while Brigette Lacquette added a pair of assists. Both Canadian goals came on power play opportunities.

Assessing her team's play, Jenner said: "Not great. I think we were a little bit sloppy. I think we kind of gave some of those opportunities to them. We know they're a good team, and when we give up a couple of 2-on-1's in the first period, it's not good for us. We did a lot of good things, but there's a lot we need to tighten up."

This was an opportunity for each of these archrivals to make a statement. The U.S. has won four straight Women's Worlds and dethroned Canada as Olympic champions last year. After the U.S. prevailed in the inaugural Olympic tournament in Nagano in 1998, the Canadians had captured four straight Olympic gold medals before falling in PyeongChang.

In an exclusive interview with IIHF.com in February, Canadian legend Hayley Wickenheiser, a 2019 IIHF Hall of Fame inductee, mused about why Canada hasn’t won Women’s Worlds gold since 2012: “You have to innovate. I think if you don’t innovate, you don't evolve, and you don’t adapt to the game, you can get left behind. So I think we have to focus on not just trying to win every four years, but win every year. It’s a big difference.”

The North American foes dished up their trademark high-tempo entertainment. Sure, there were plenty of penalties, yet on the International Day of Sport for Development and Peace (6 April), there was little of the bitterness that famously permeates their pre-Olympic tilts. Just a lot of tripping minors.

"I think the reffing is a little bit different when we come over from North America," Jenner said. "They let a lot go in the Rivalry Series and I think you could tell both teams were used to that. Those were pretty physical games. They're being tighter with it here. So we've got to find a way to stay out of the box."

The Canadians repeated their Olympic pattern of using someone other than Shannon Szabados in net against the Americans in the round-robin. This time, instead of Genevieve Lacasse, who faced the Americans first in PyeongChang but sat out on Saturday, it was third-time Women's Worlds participant Emerance Maschmeyer. With Les Canadiennes de Montreal this season, the 24-year-old Maschmeyer led the CWHL with 15 wins, a 1.45 GAA, and a 93.5 save percentage.

"It's an absolute honour to be back on this team," said Maschmeyer. "It feels right, and I'm excited to be representing the team and the country again."

Rigsby, who edged out Maschmeyer and Noora Raty as the CWHL’s Goalie of the Year with the champion Calgary Inferno, got her second straight start for the Americans.

Both teams put up six goals in their openers, with the U.S. beating host Finland 6-2 and Canada blanking Switzerland 6-0. This contest, unsurprisingly, proved tighter and tenser.

As against the Finns, Canadian captain Marie-Philip Poulin took the warmup, but the two-time Olympic gold medalist’s ailing knee left her on the bench in a supportive role. American veteran Hannah Brandt was scratched, enabling Women's Worlds rookie Jesse Compher to debut on Knight's line.

Rigsby said of Compher: "She did awesome. For her to just step into that role the way she did, she didn't even skip a beat, winning draws and battling hard out there and getting great opportunities. It's really great to have new faces like that as part of our team."

At 4:23, Knight opened the scoring on a 2-on-1 rush. Linemate Dani Cameranesi slid the puck past rookie Canadian defender Micah Zandee-Hart, and the two-time Worlds MVP put it inside Maschmeyer’s right post.

Canada answered back just 2:04 later on a 5-on-4. Brianne Jenner fired a point blast with traffic in front, and the disc squeezed through Rigsby, enabling a falling Nurse to bang it in.

At 18:13, Coyne Schofield made it 2-1 on a Canadian gaffe. After Zandee-Hart fell over in her own end, the U.S. captain zipped in like a Roadrunner cartoon, grabbed the puck, and knifed a backhander through Maschmeyer.

"It was textbook," Pankowski said of Coyne Schofield's goal. "She put a beautiful goal in there. Shows how great she is."

With Knight in the box for tripping early in the second period, the Canadian power play provided the equalizer at 1:55. Jenner tipped Lacquette’s long shot past Rigsby.

Although Canada pressed with an aggressive forecheck, it couldn’t take the lead. And it took just four seconds for Pankowski to make it 3-2 on another U.S. power play at 14:03, uncorking a slapper from the right faceoff circle that found the twine.

In the third period, U.S. newcomer Sydney Brodt nearly potted her team's fourth goal when she bounced one off the crossbar on the rush near the 11-minute mark.

The penalty parade continued. The Canadians pulled Maschmeyer for an extra attacker in the dying moments with Cayla Barnes in the box for high-sticking. Yet that 6-on-4 opportunity was nullified when Natalie Spooner took a hooking minor with a minute left. Canada will hope to take its revenge in the medal round.

"I think we've played them five times since PyeongChang, but there's always emotion in these games," Jenner said. "This is Worlds. This is what we train for all year. There's a lot of emotion when we don't play up to our potential. I don't think we fully reached that today."

The U.S. faces Switzerland on Sunday and Canada takes on Russia on Monday.

Canadian coach Perry Pearn outlined his goalie plans: "We have three veteran goalies and they're all good goalies. We felt that we needed to give them all a meaningful game in the first four games. So I don't think I have a secret plan. Lacasse is going to play against the Russians and then Szabados is coming back against Finland. That gives Masch a tough game against the U.S. It gives Lacasse a tougher game than probably the Swiss game was. Then Szabados gets a hard game against Finland. So then I think we manage our goaltenders from there in the playoff round." 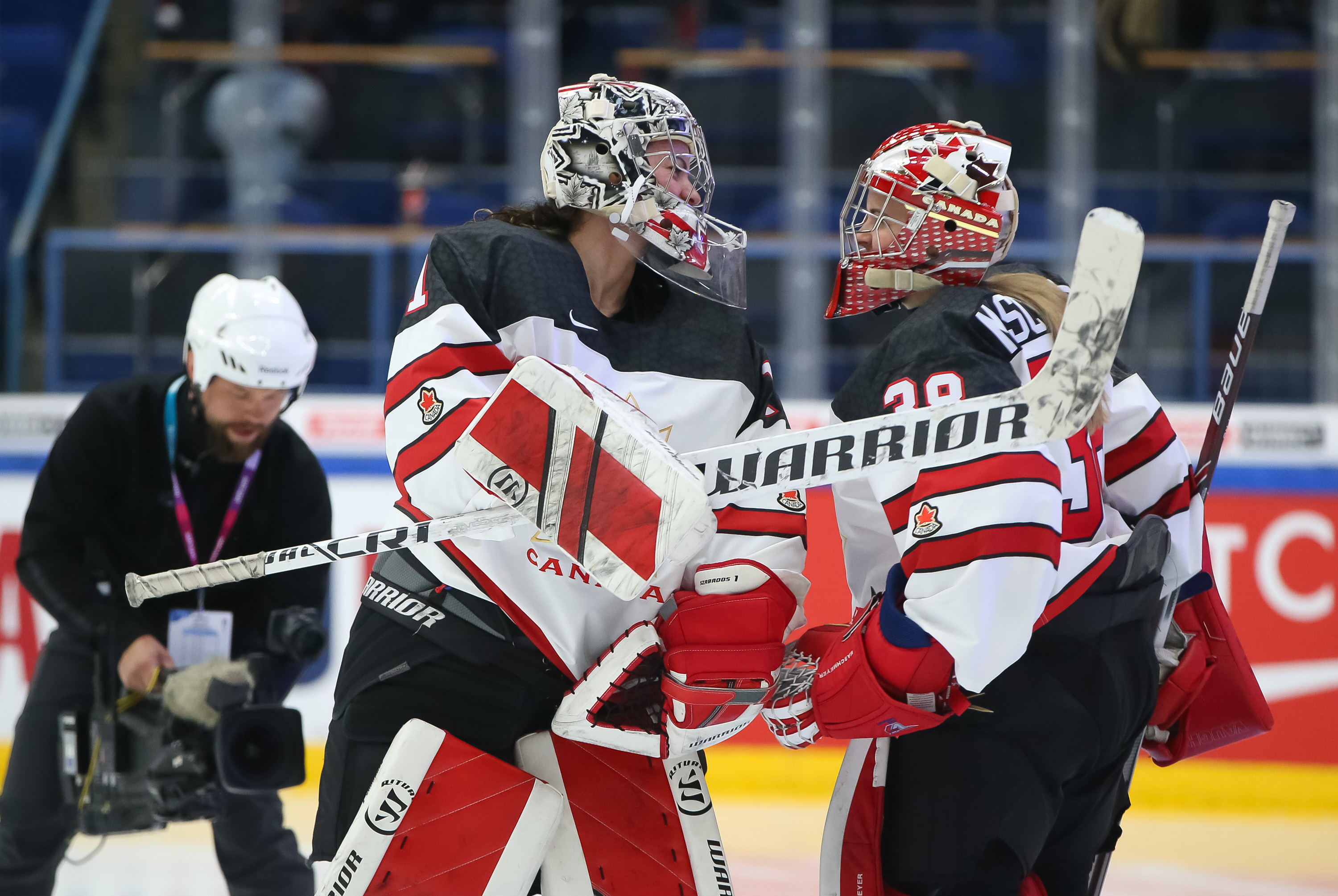 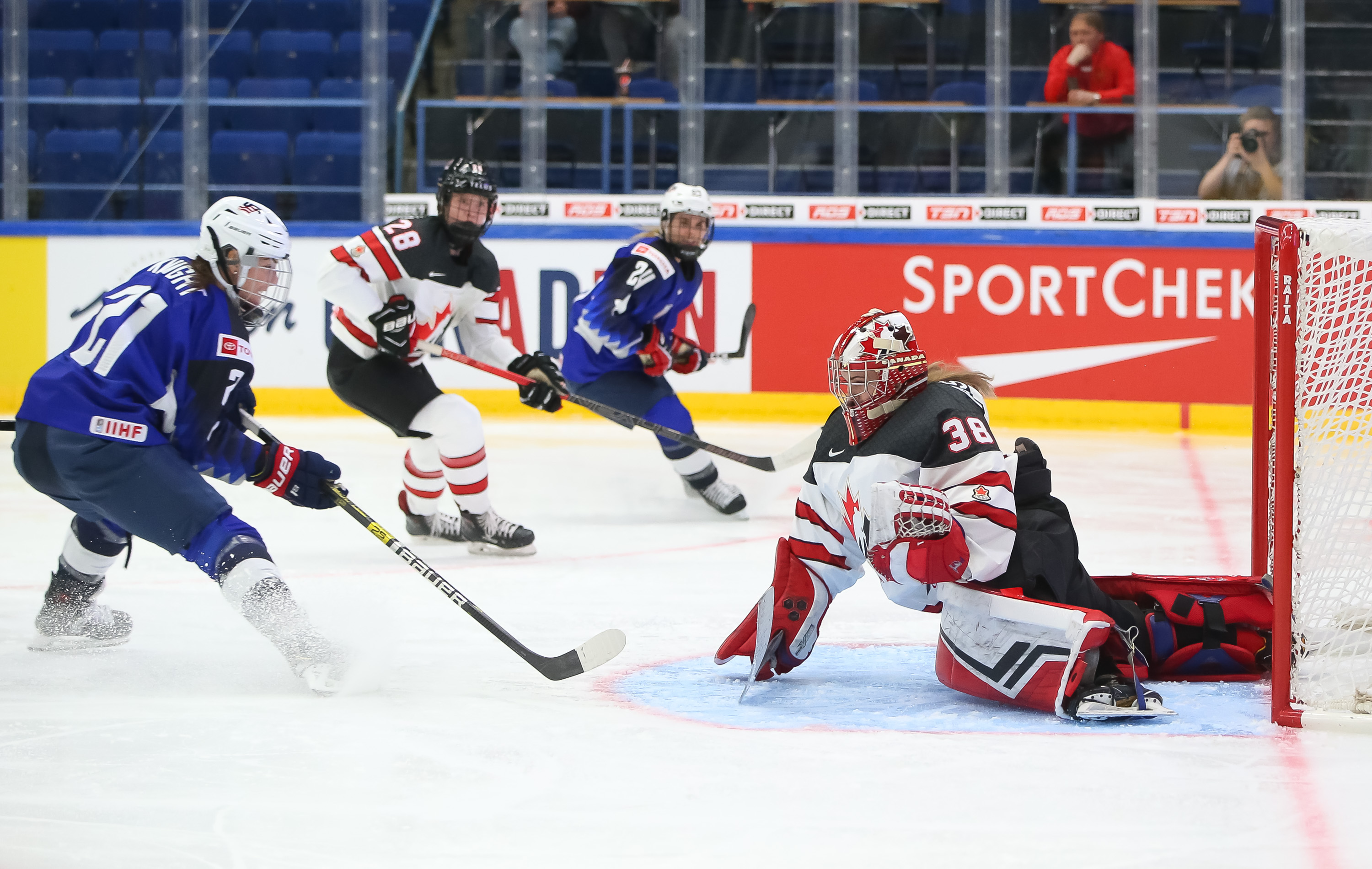 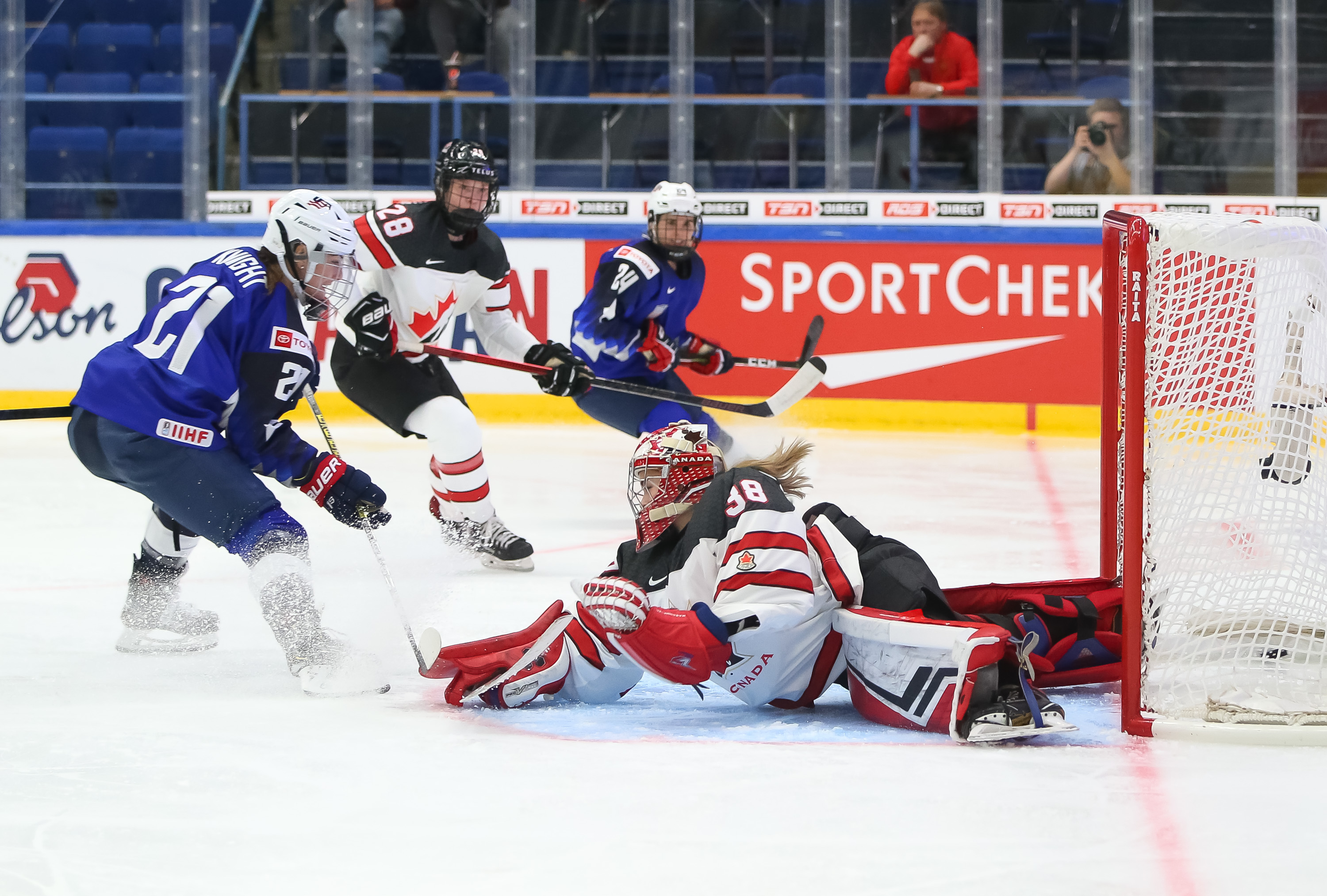 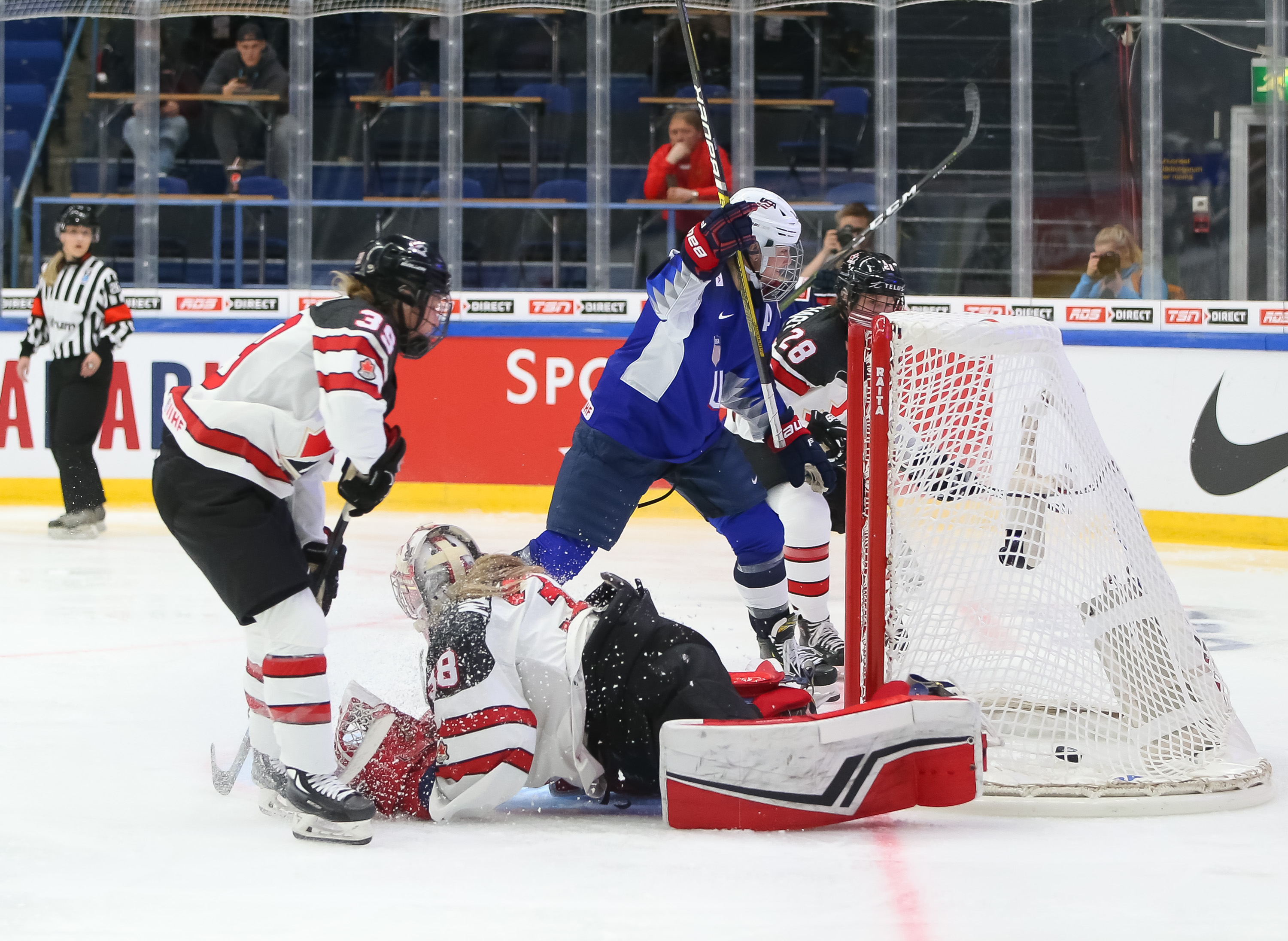 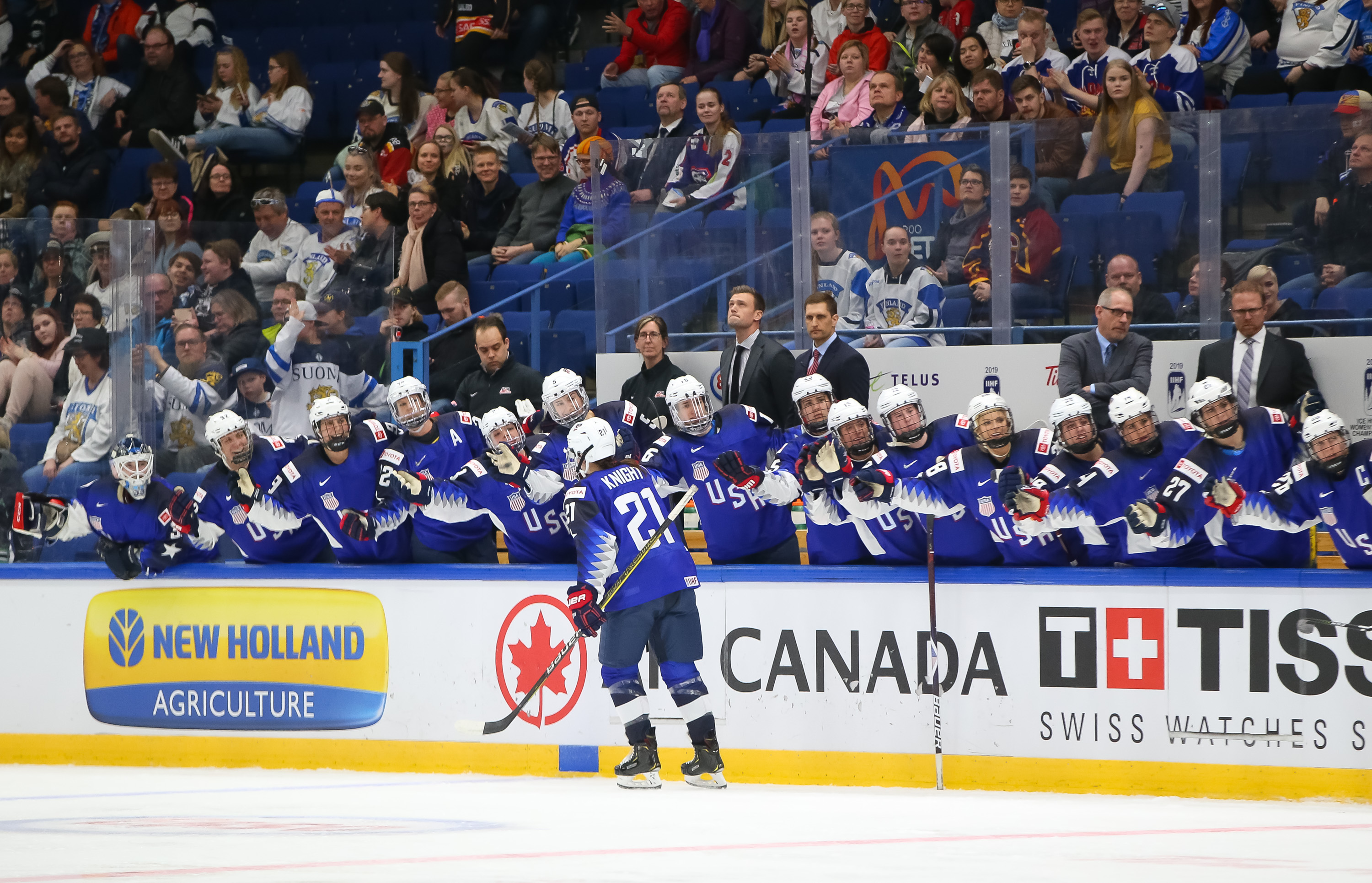 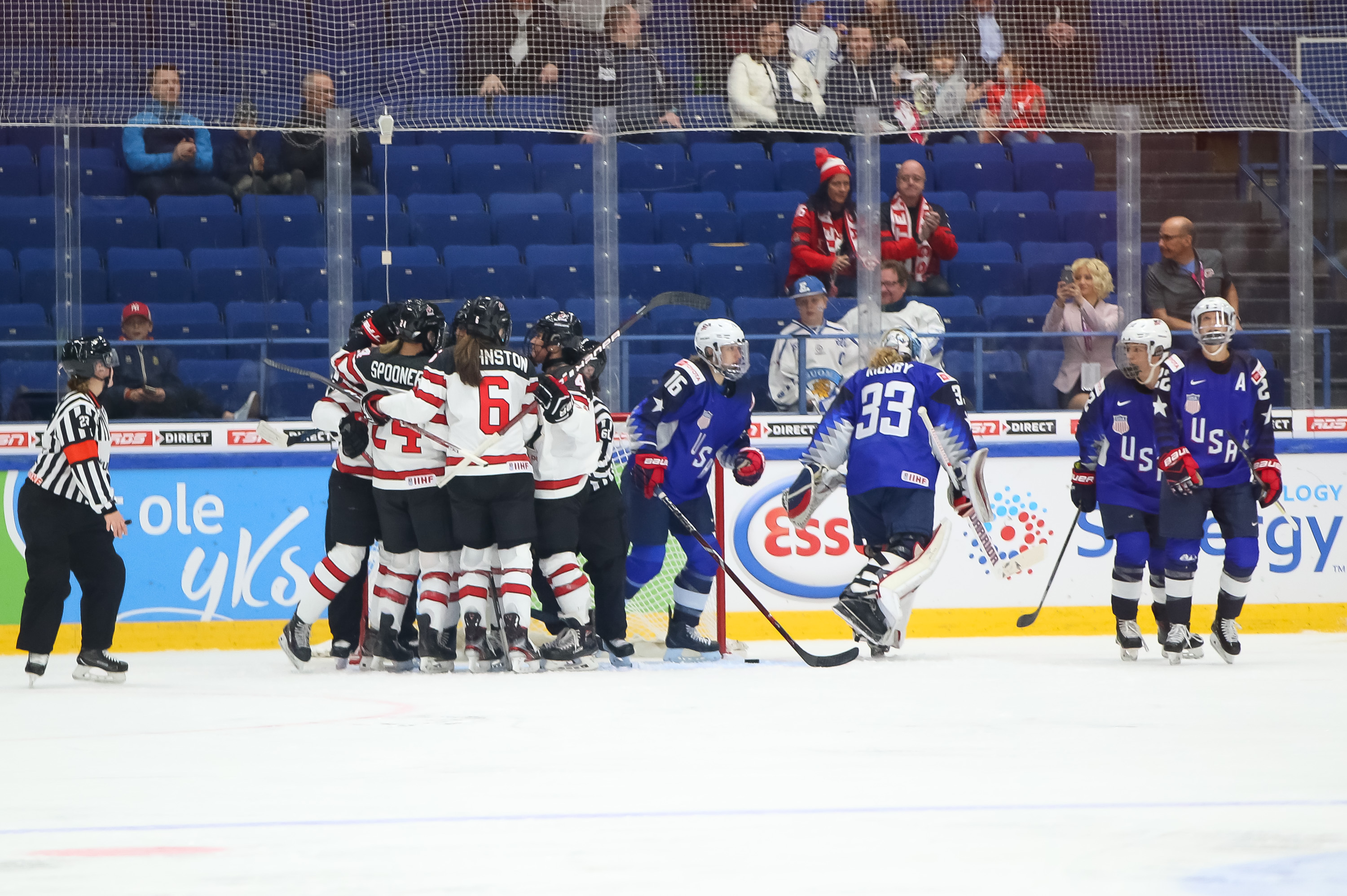 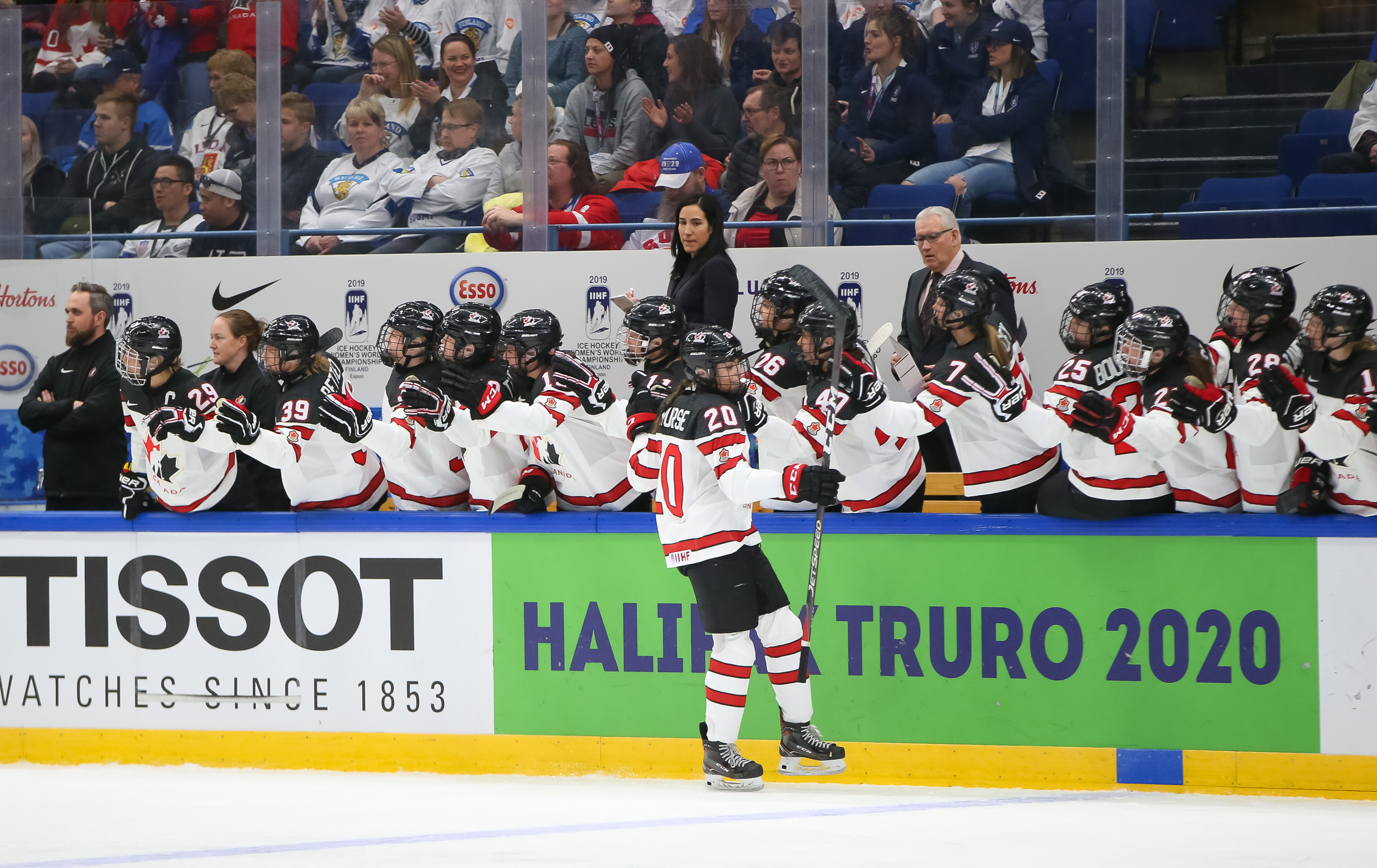 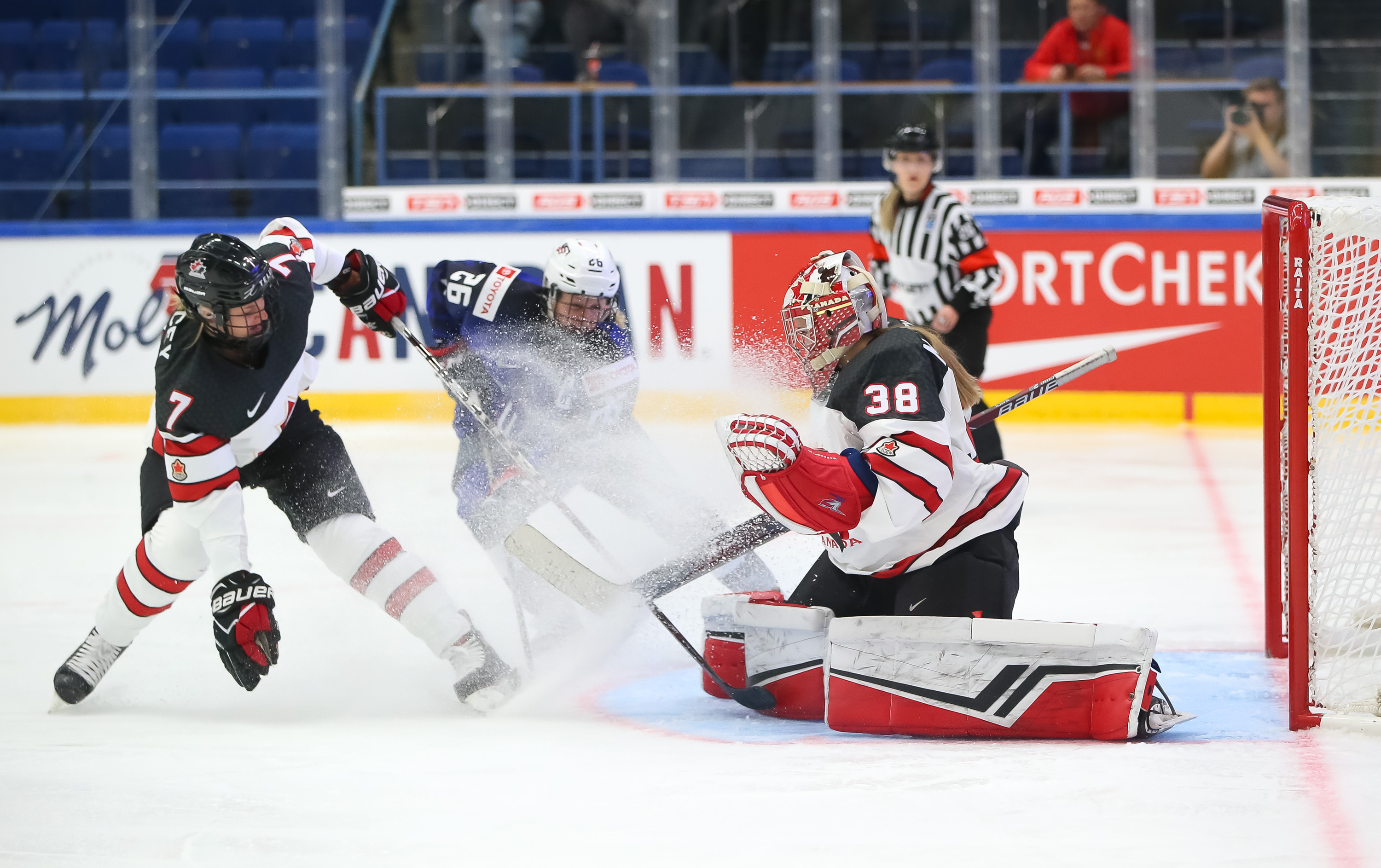 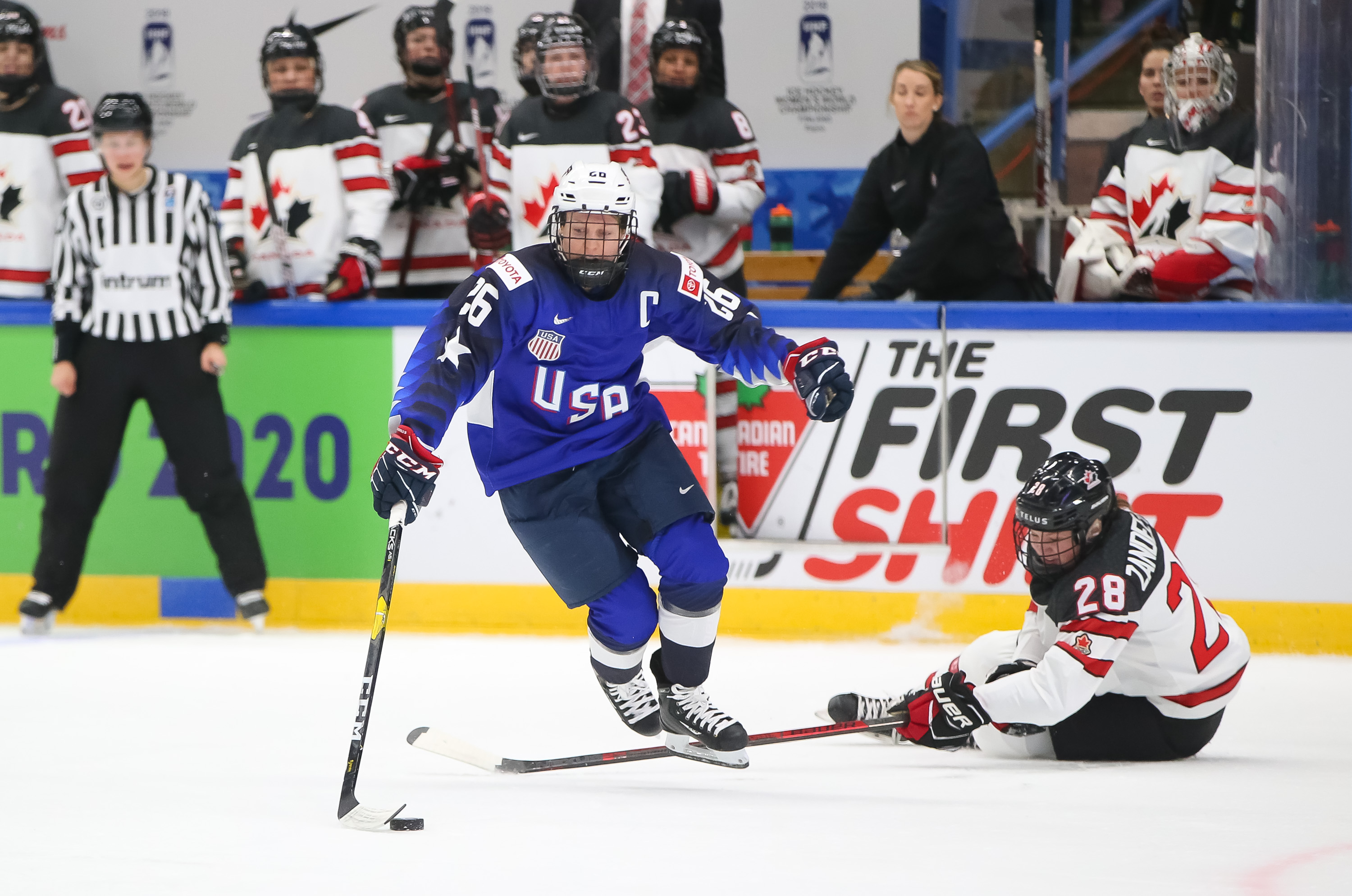 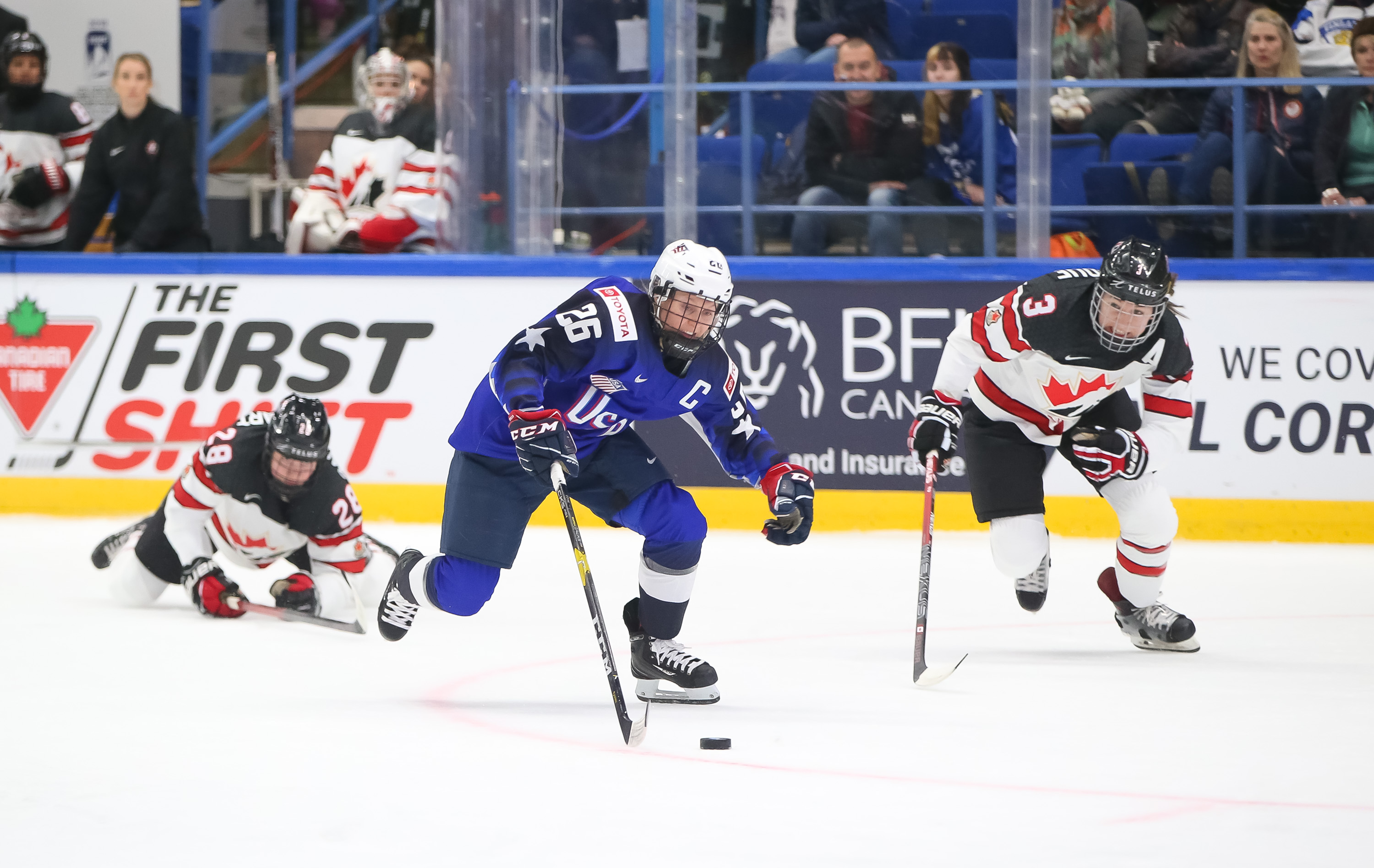 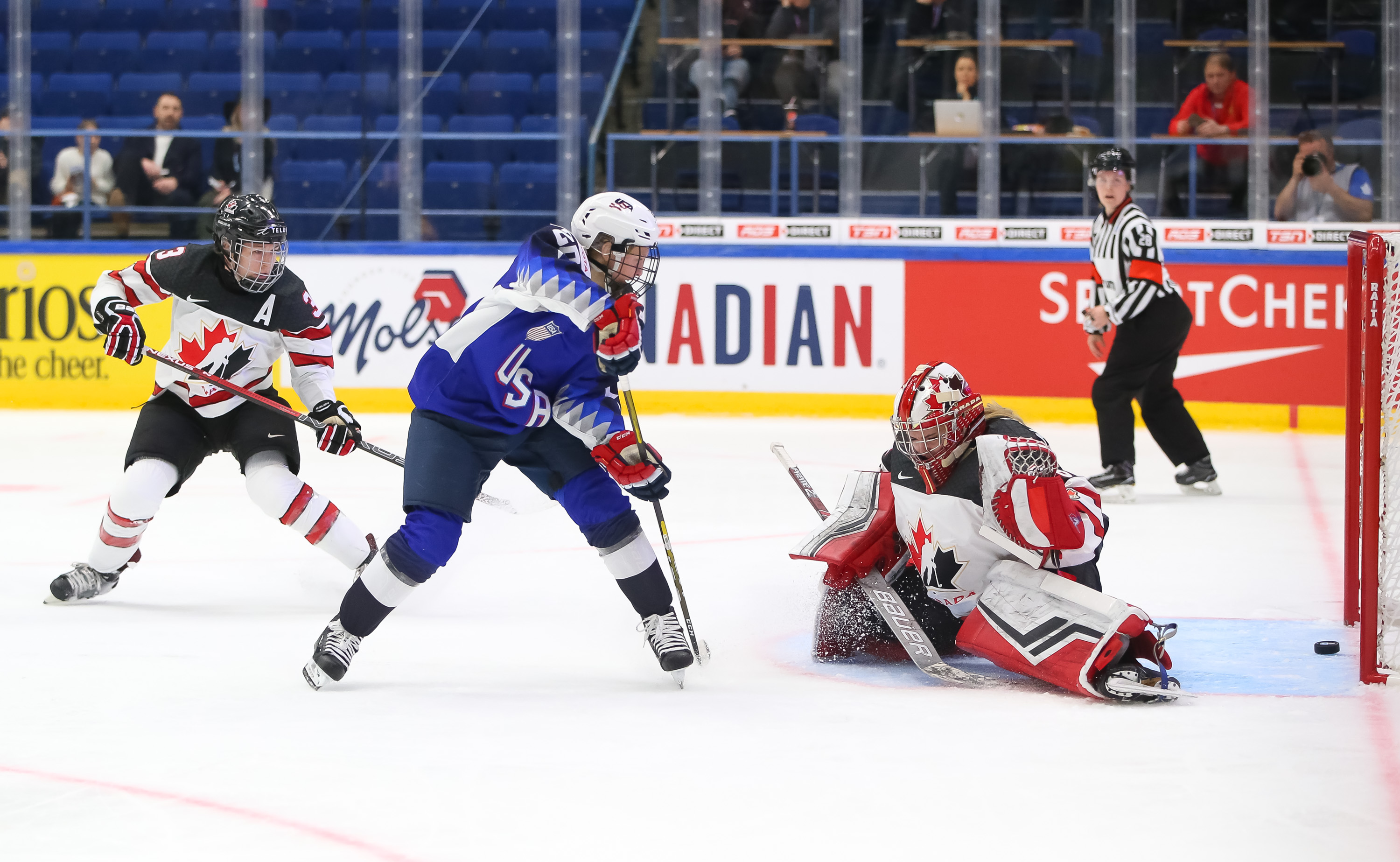 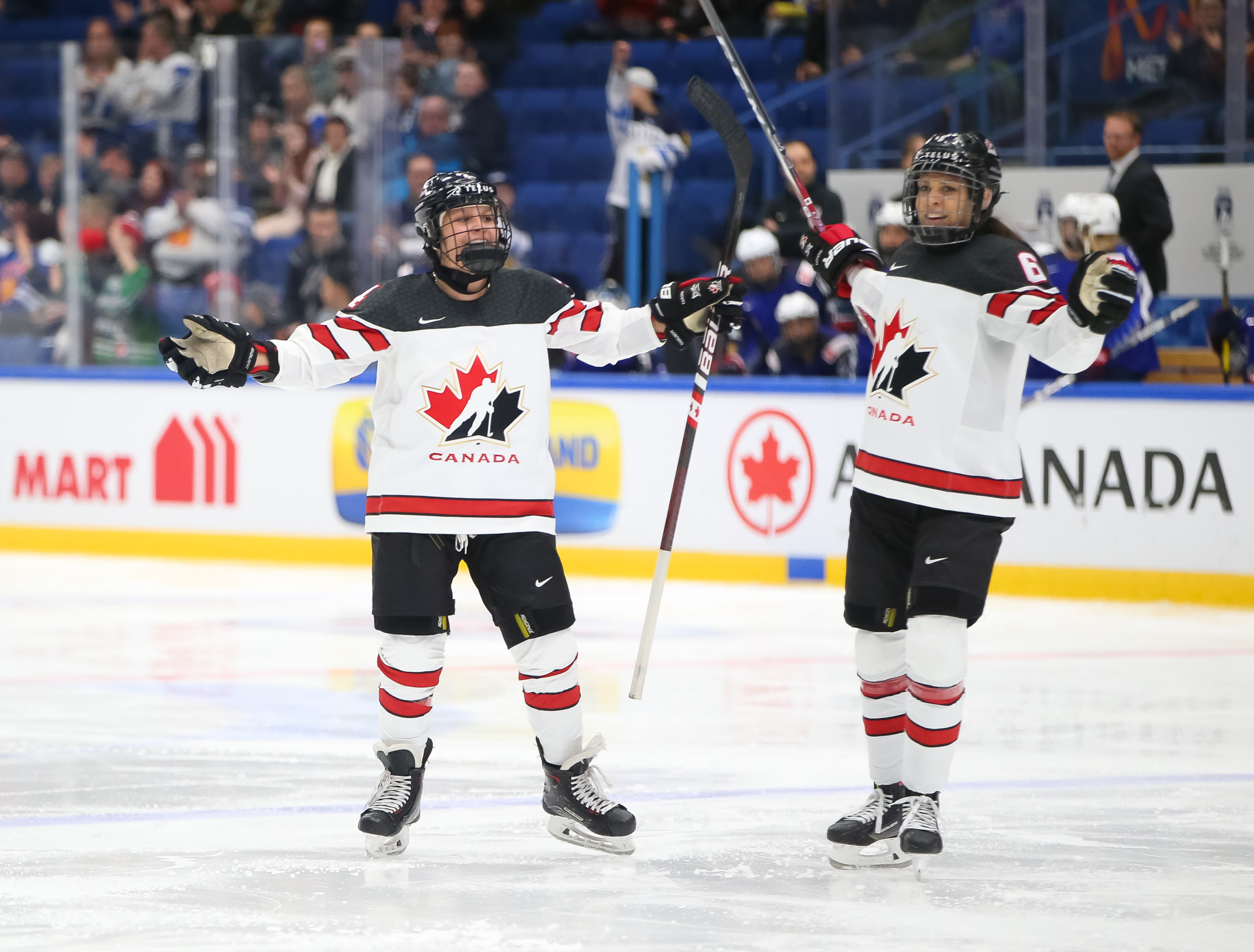 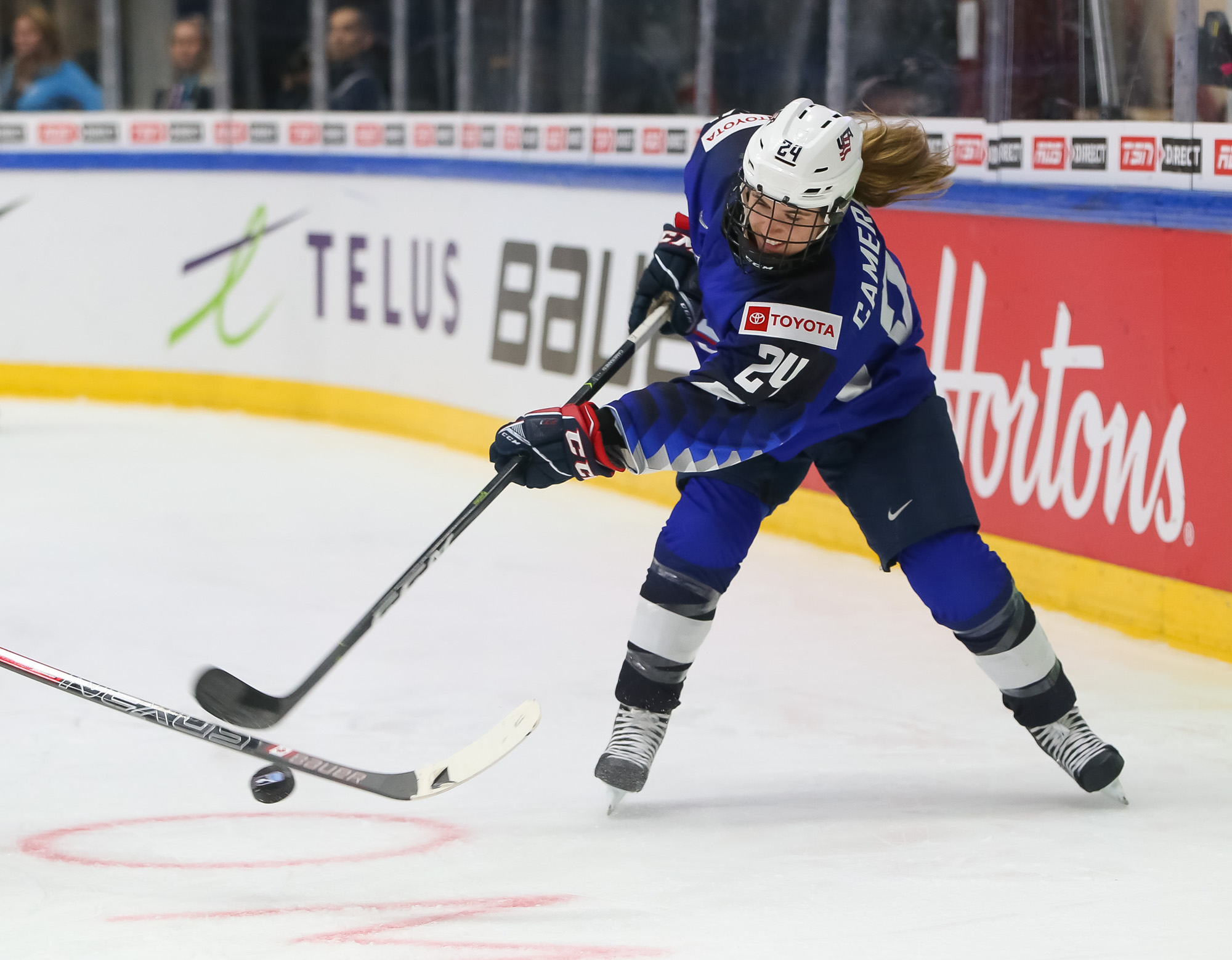 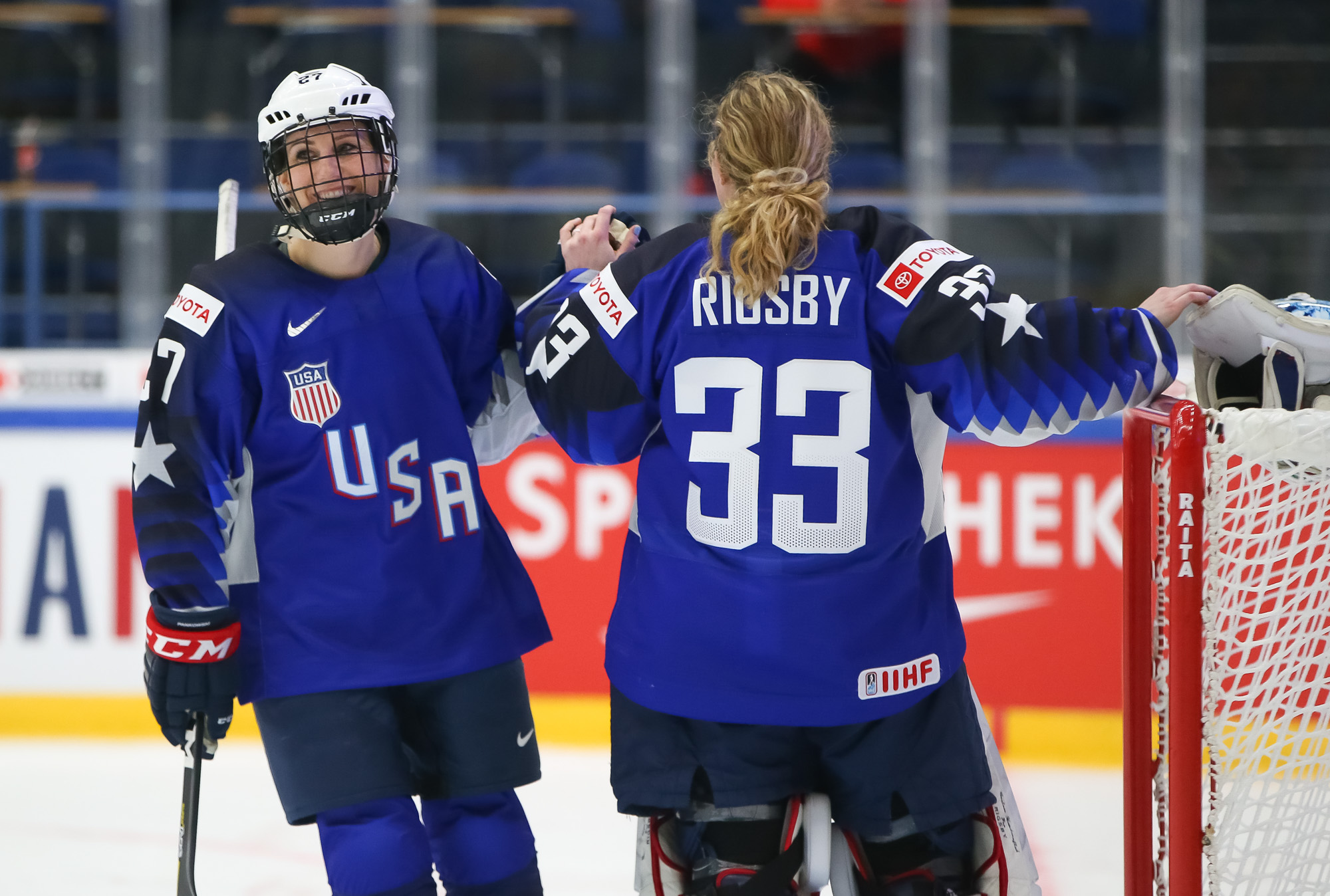 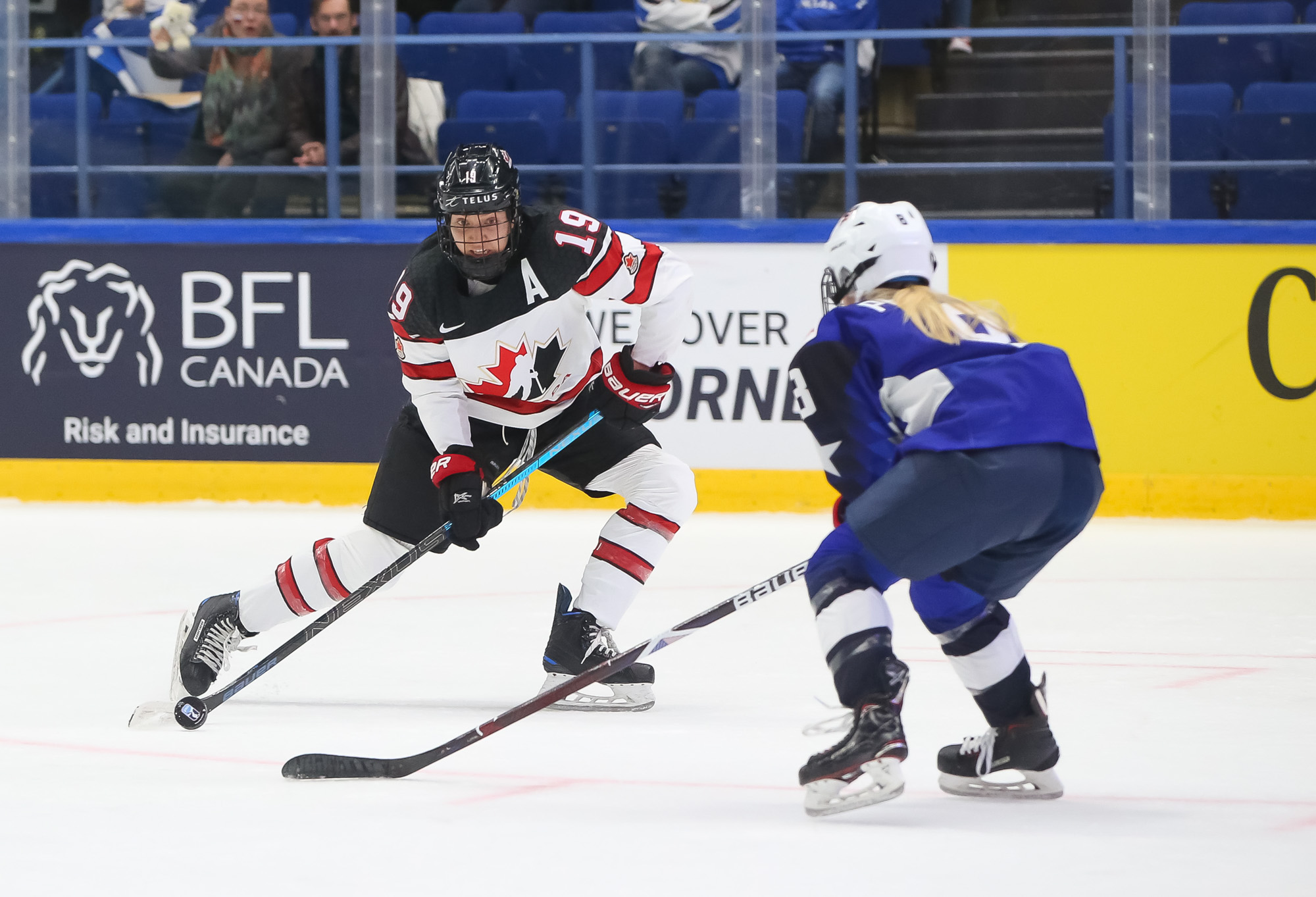 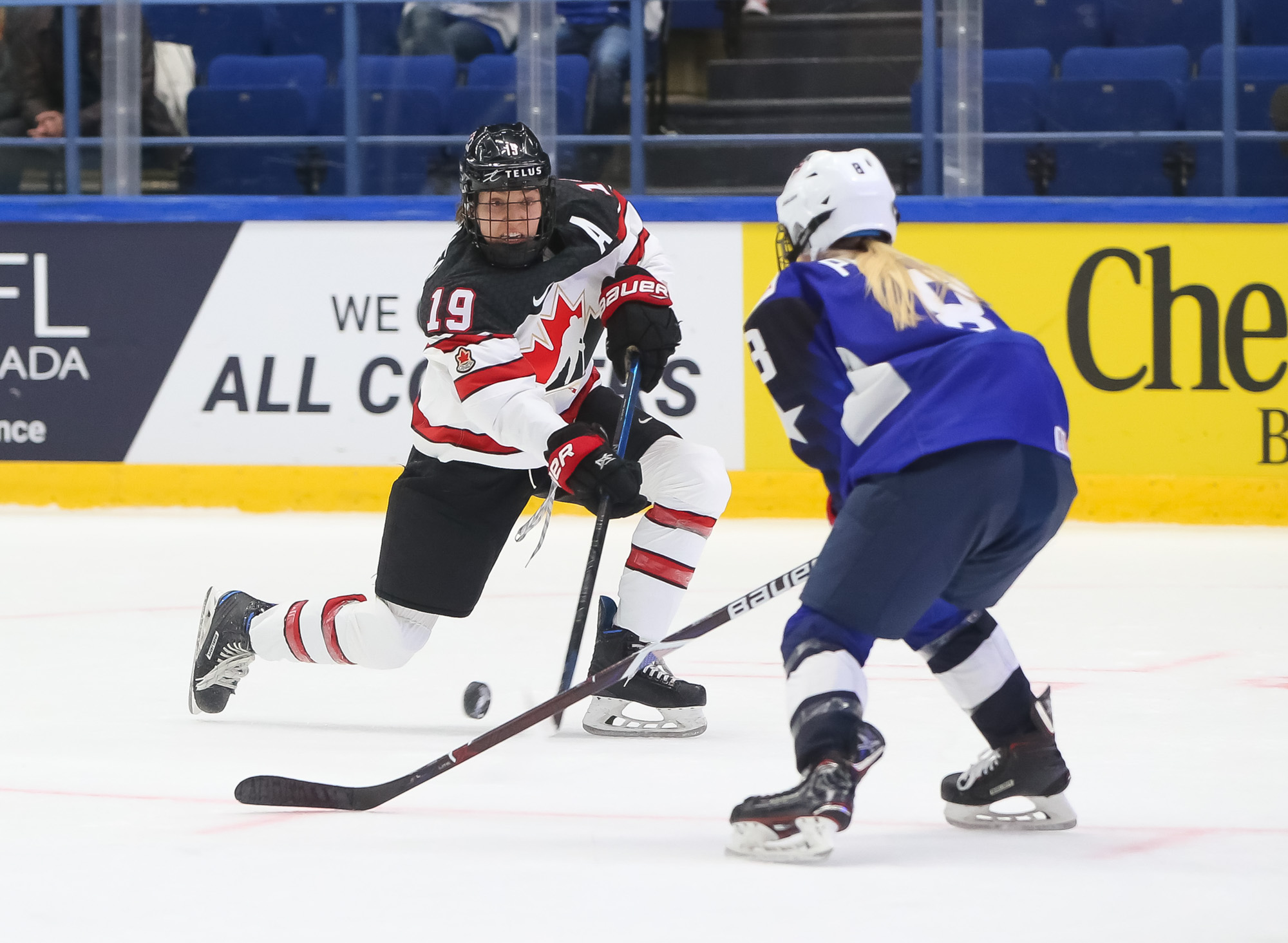 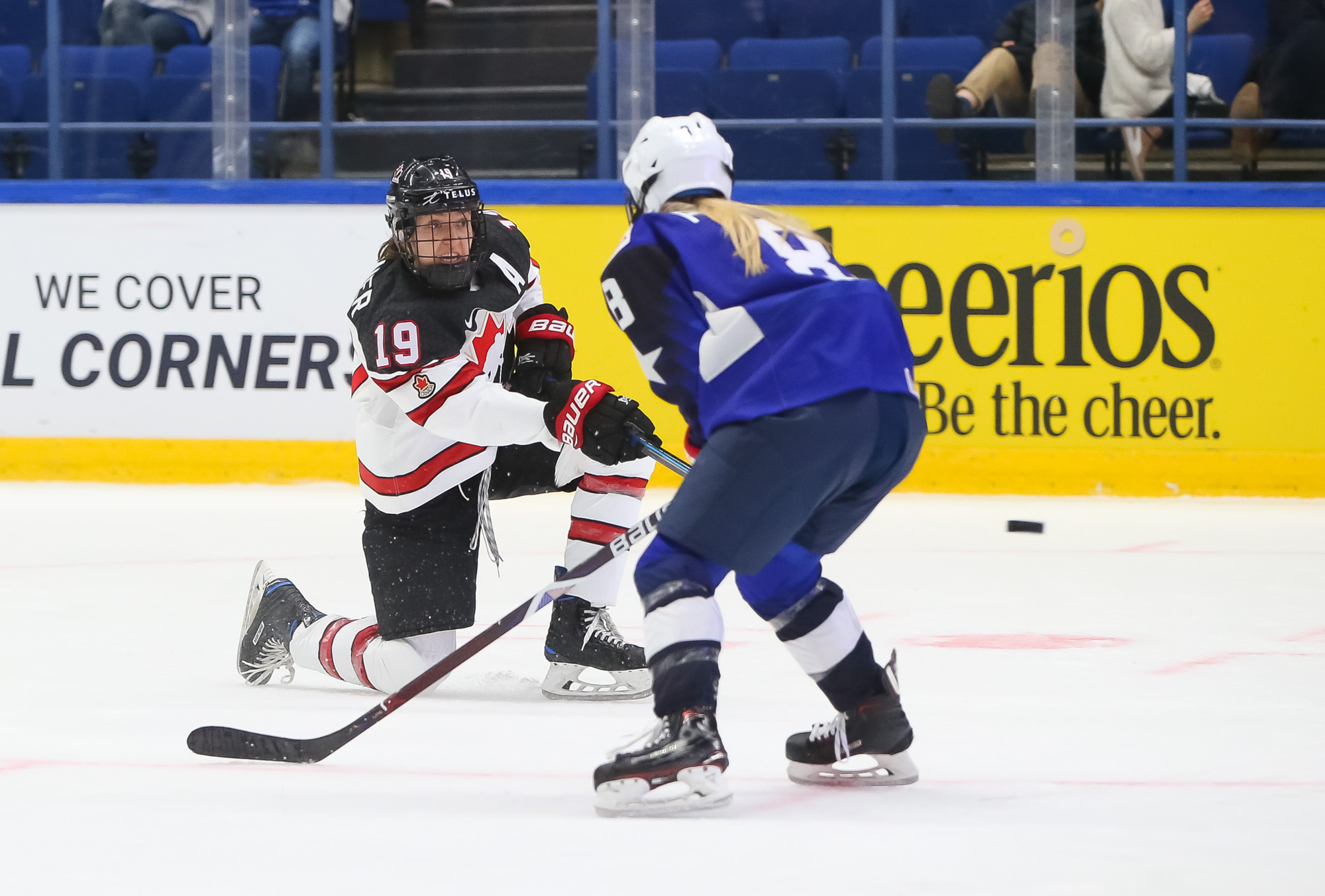 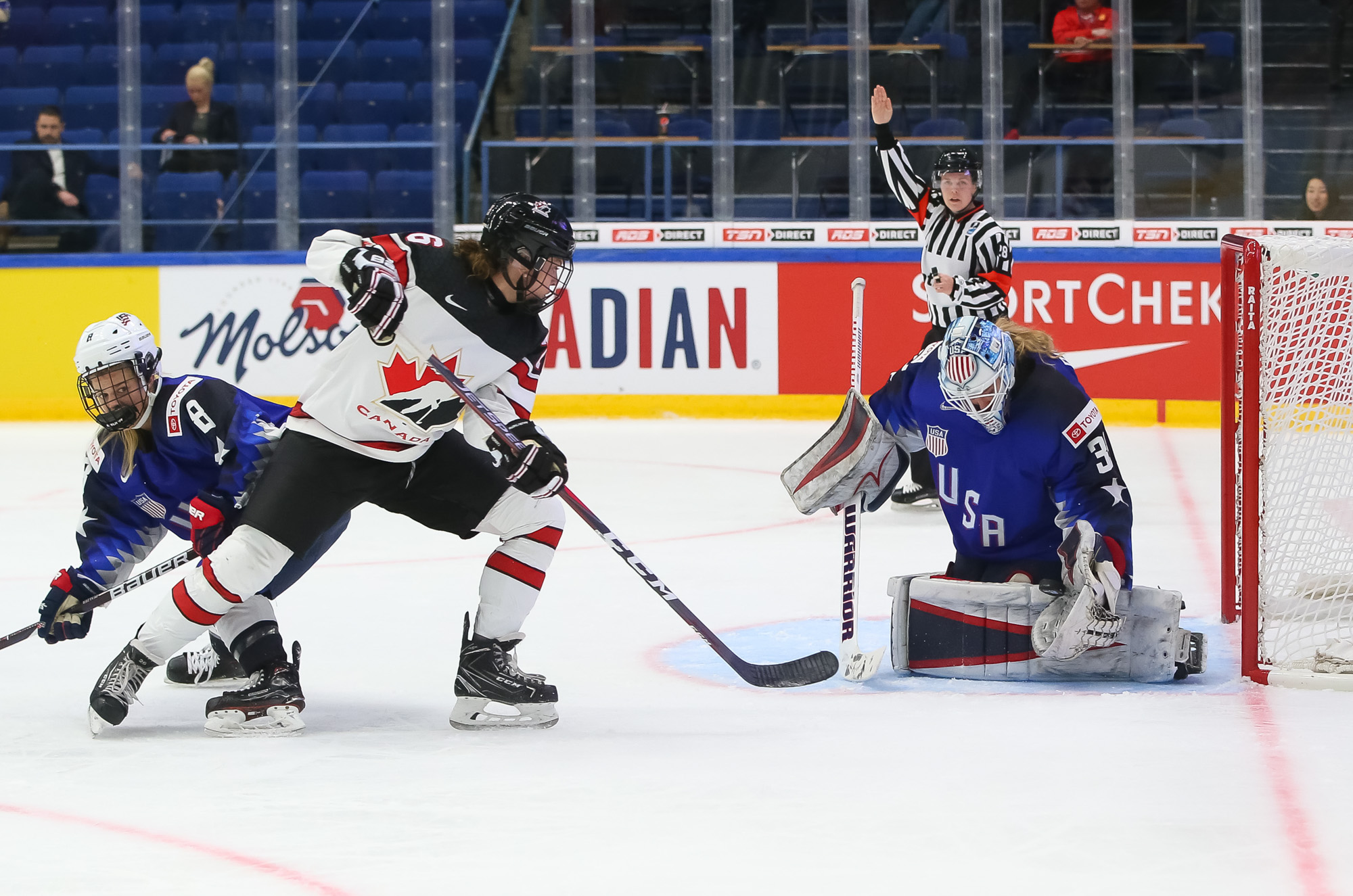 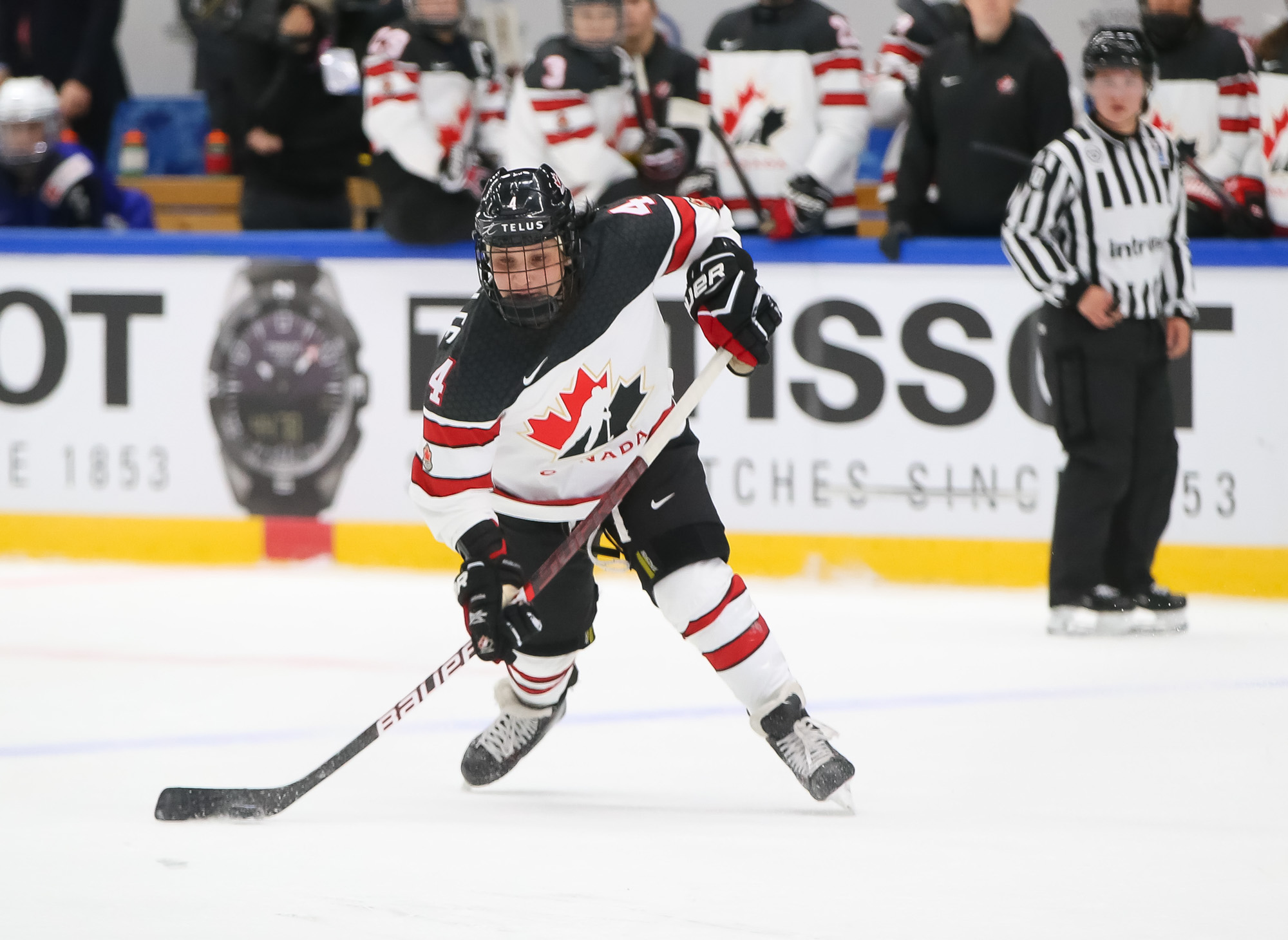 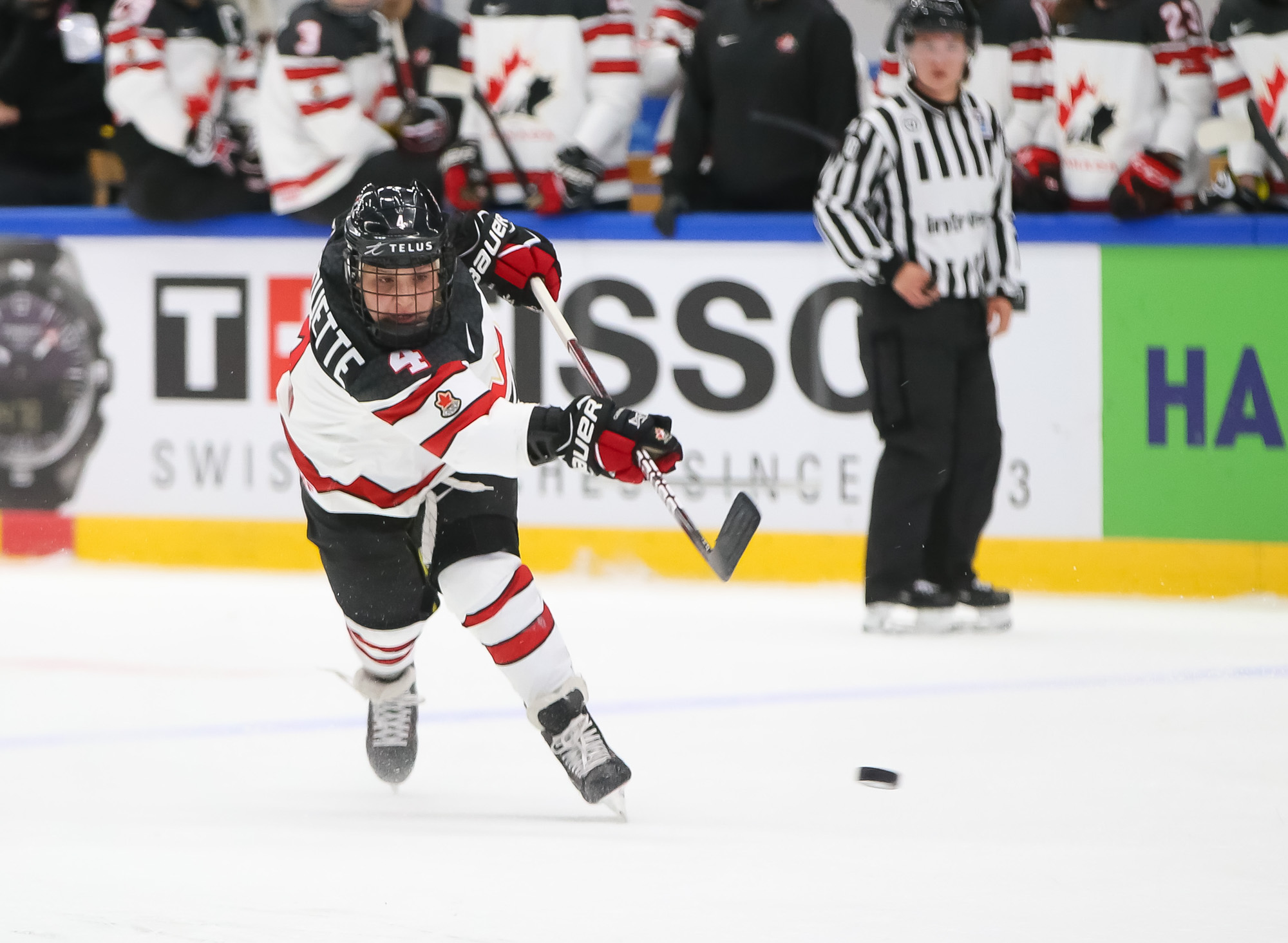 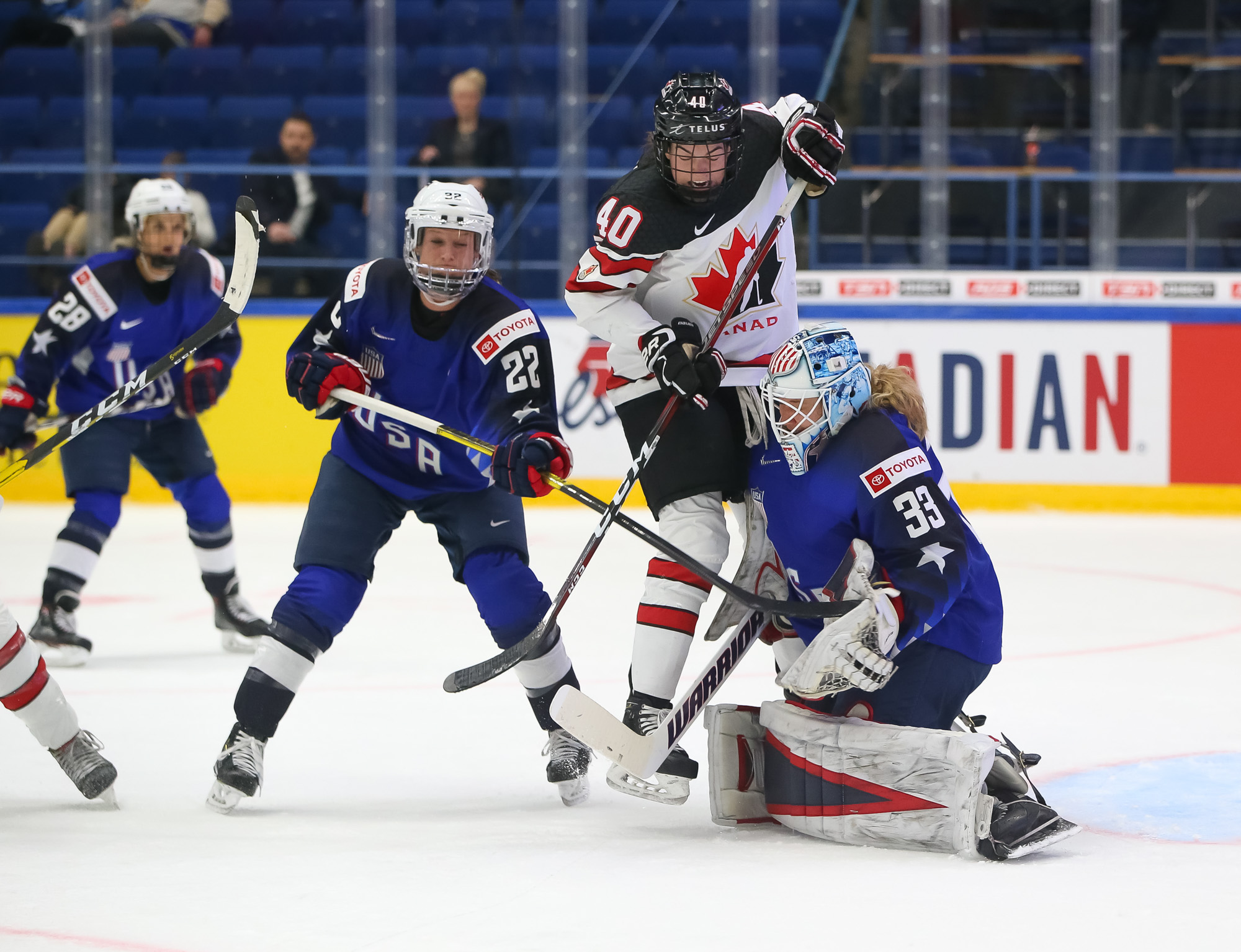 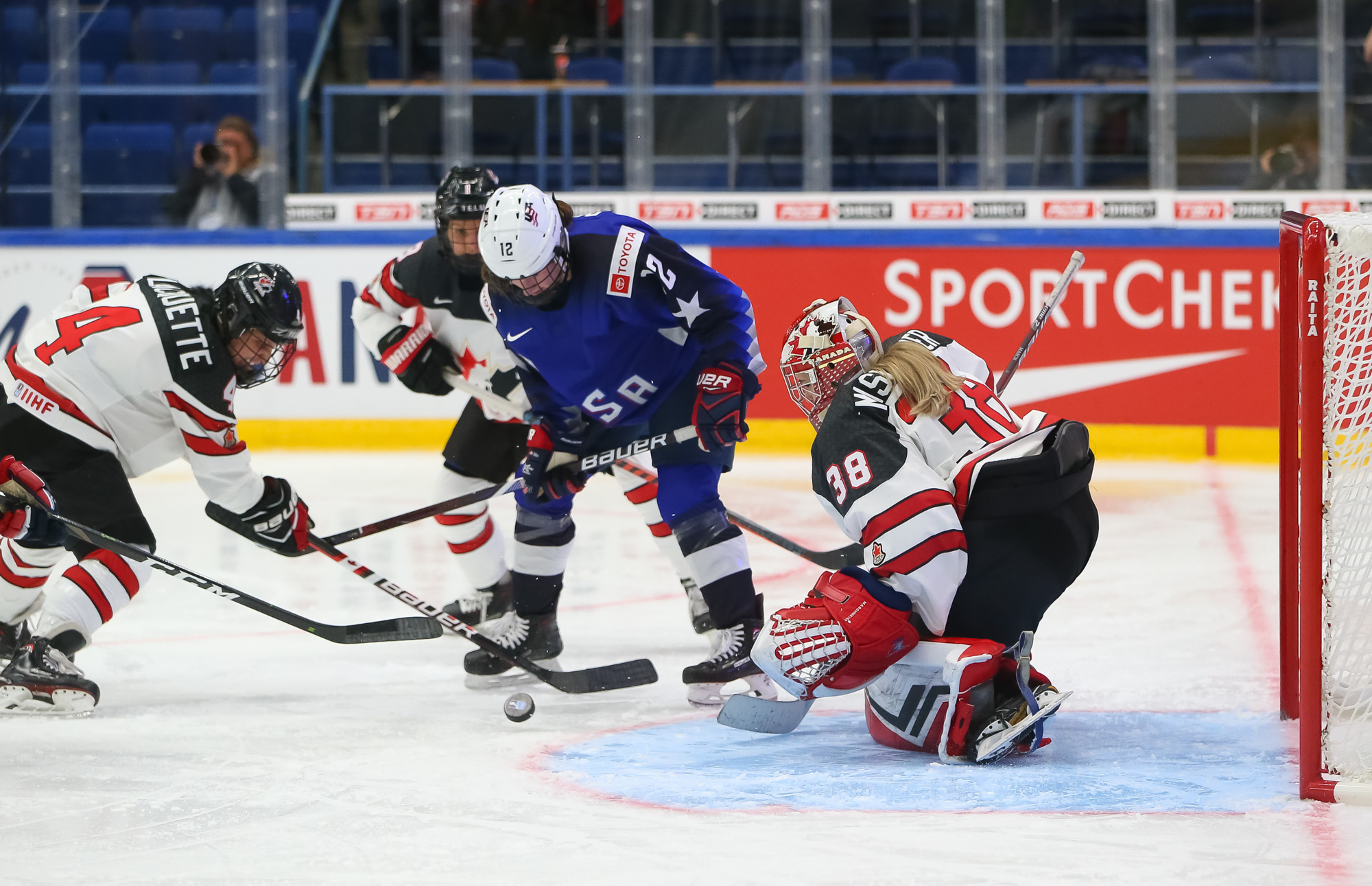 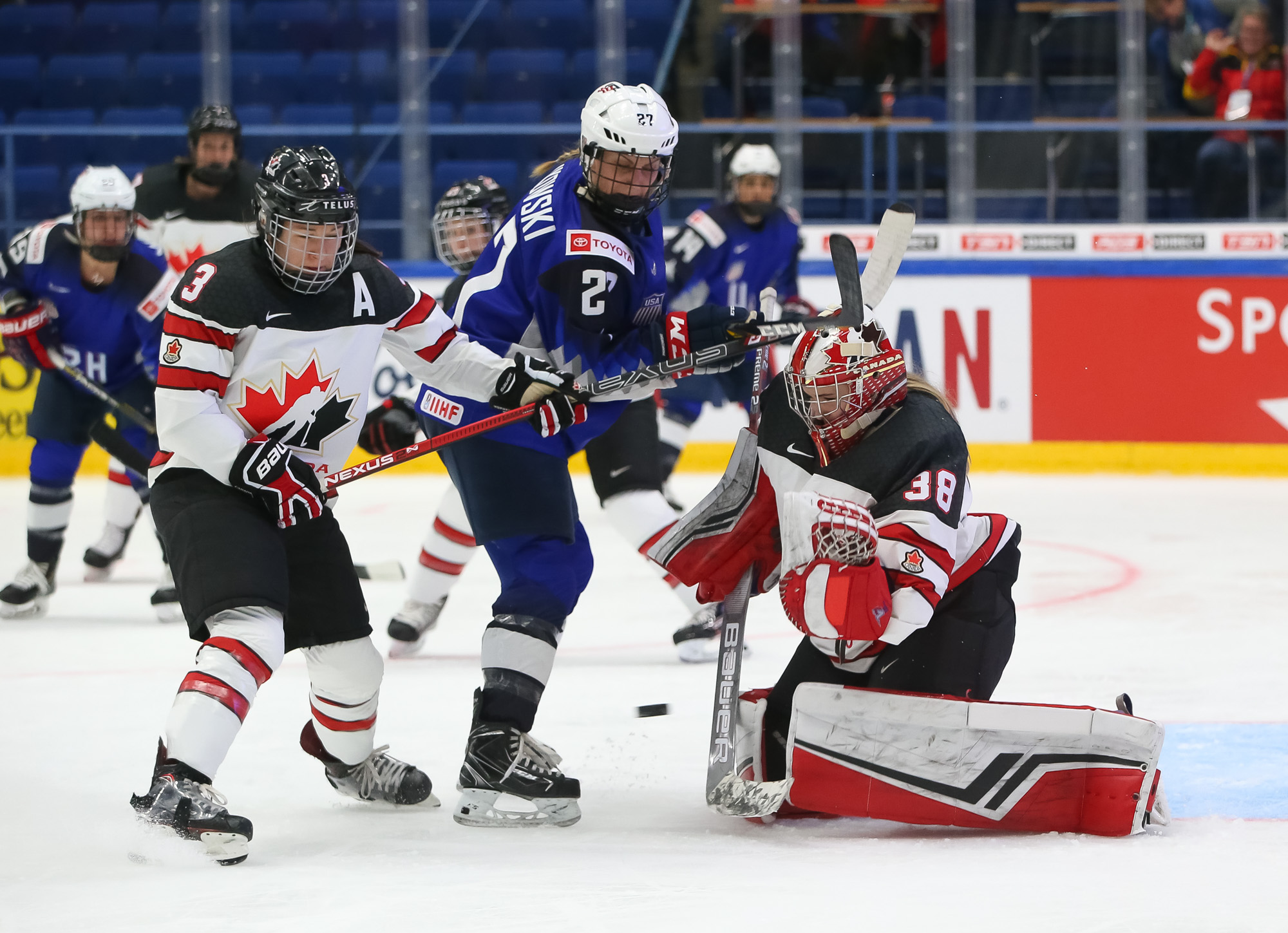 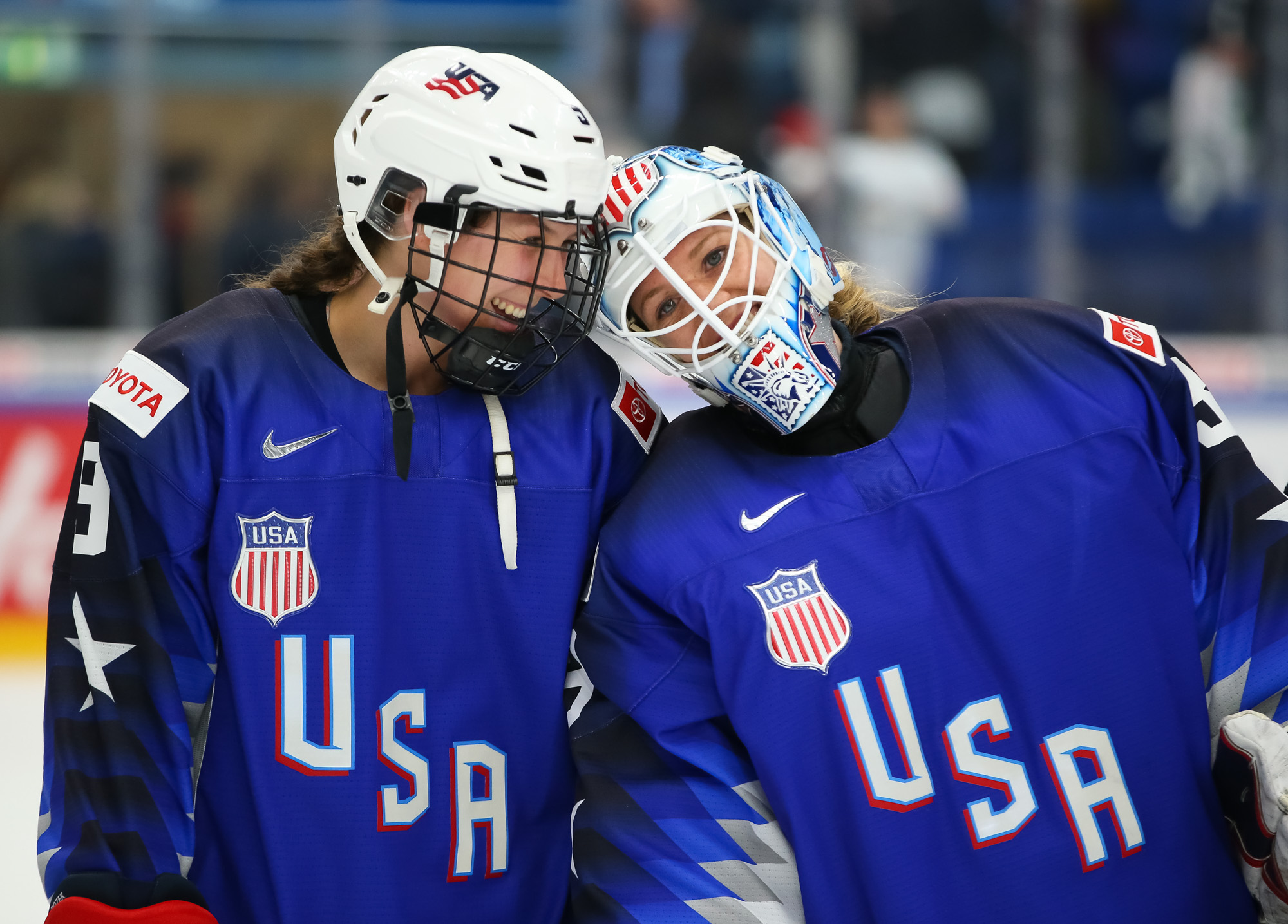 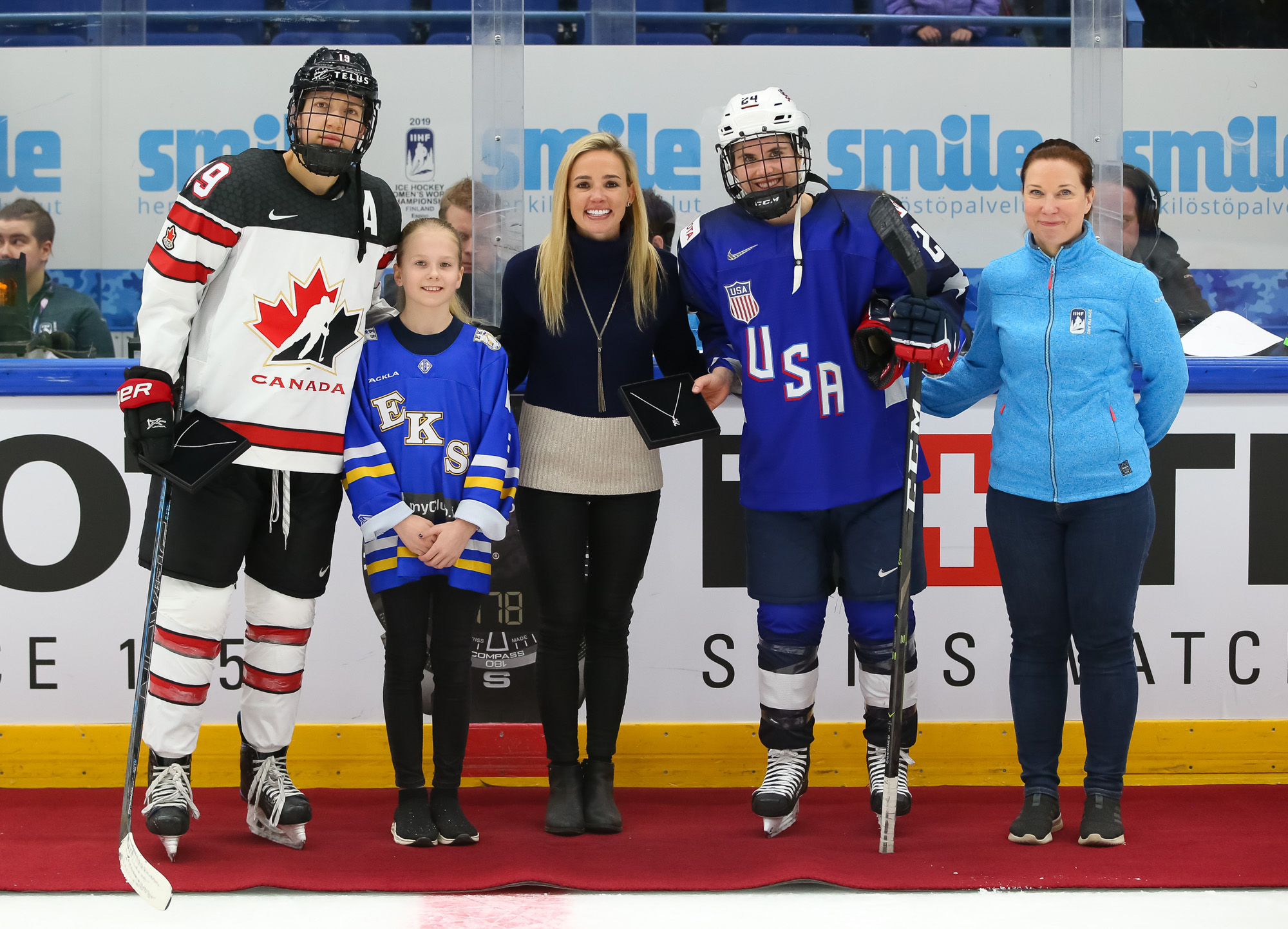 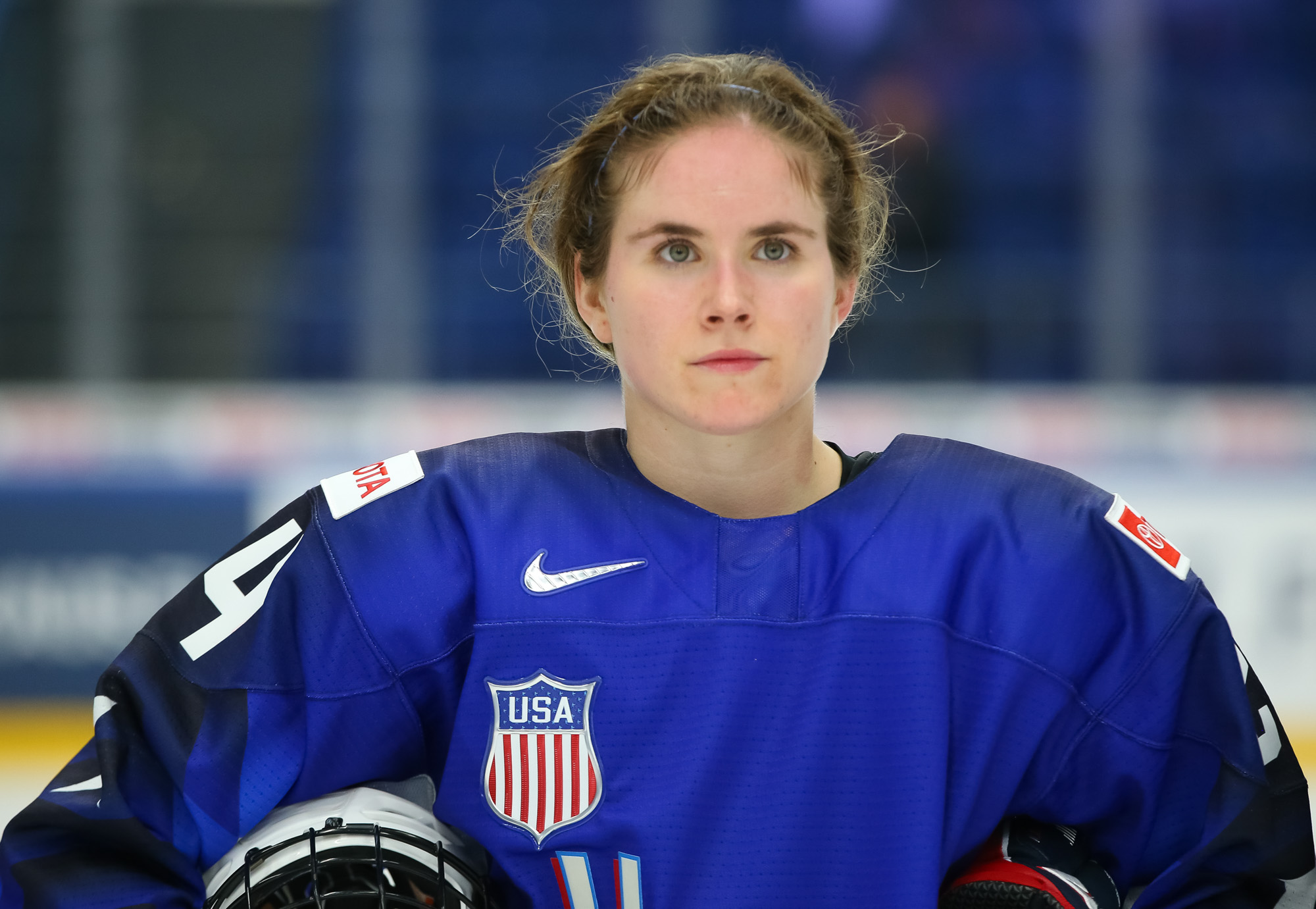 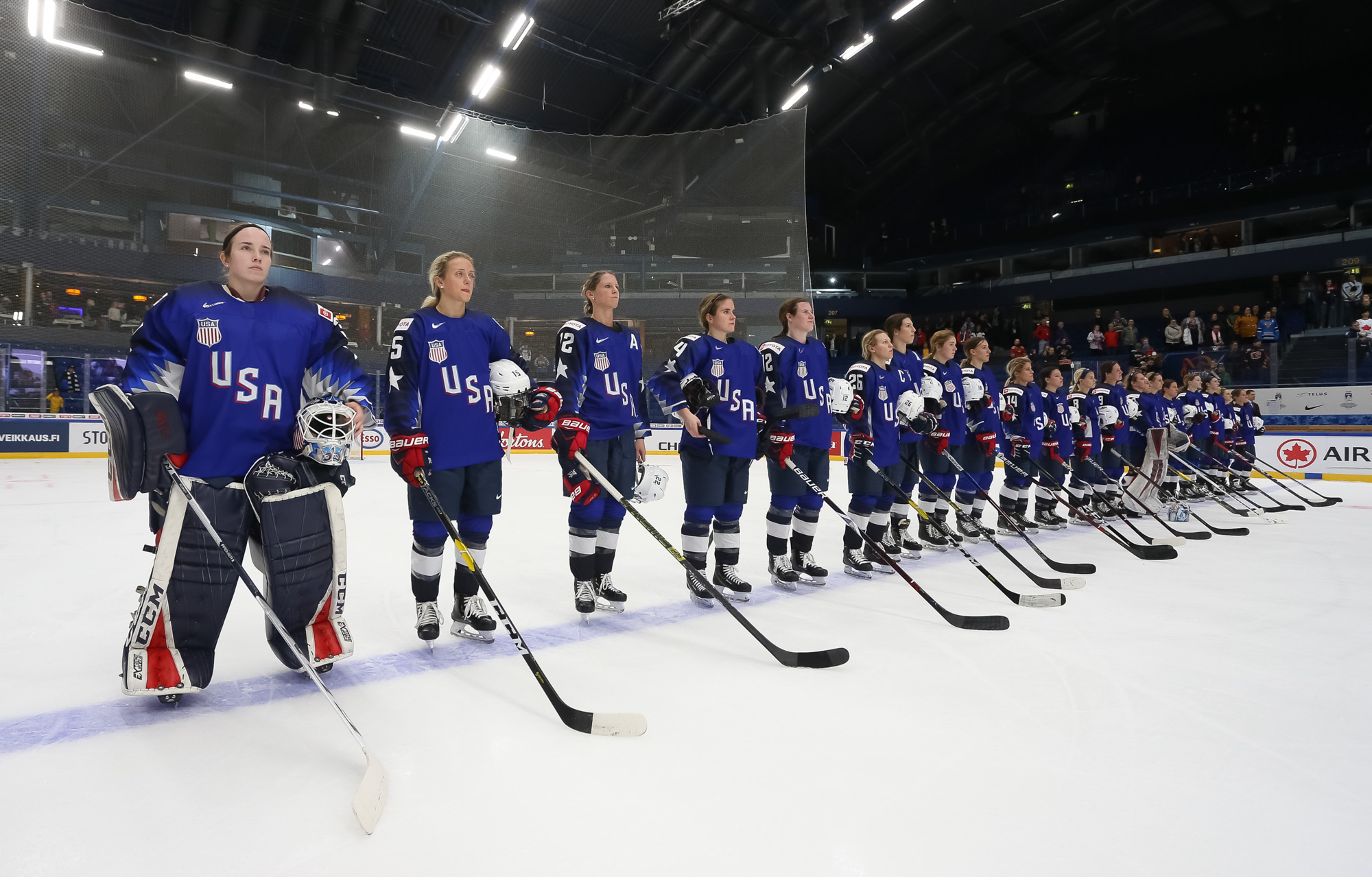 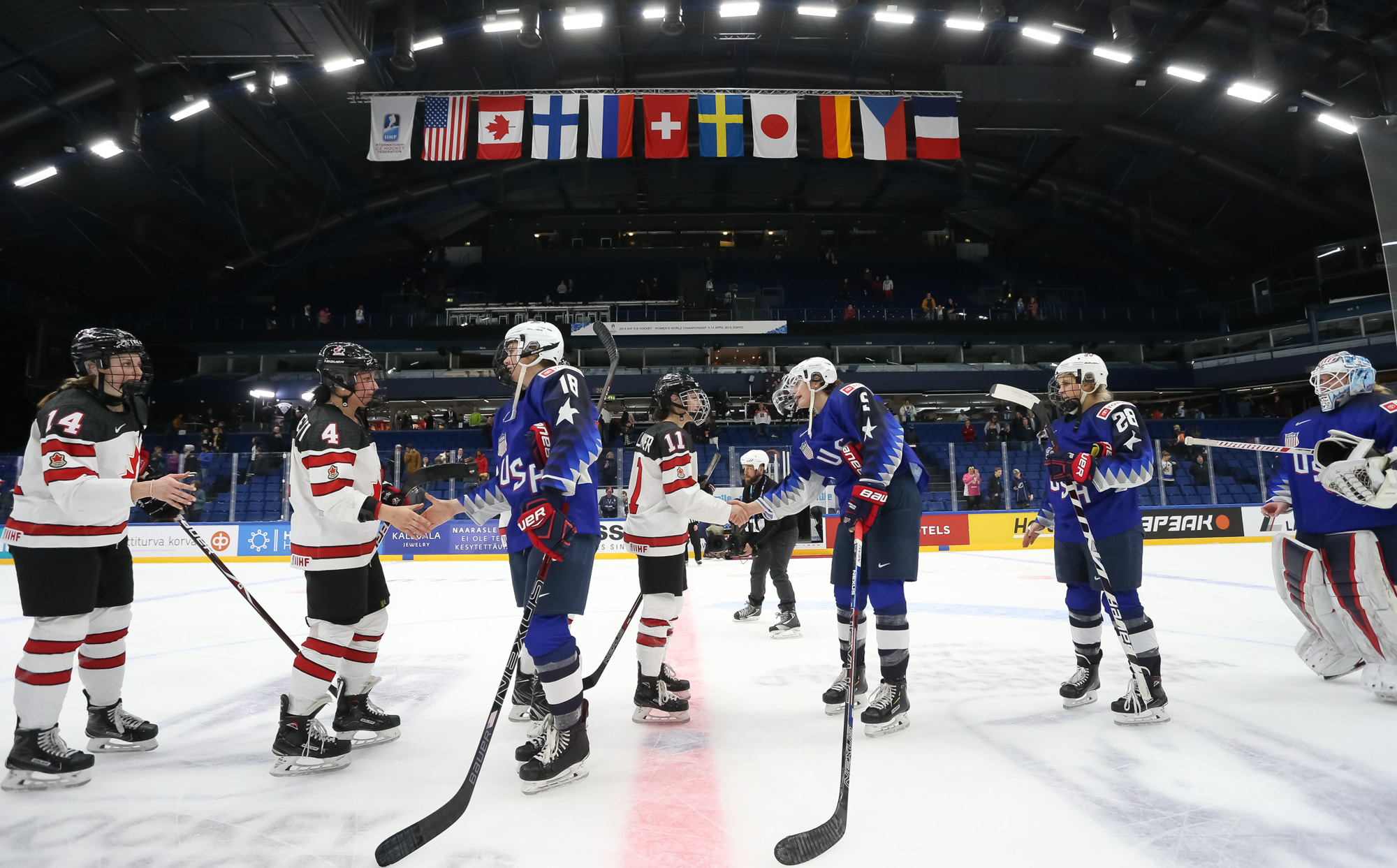 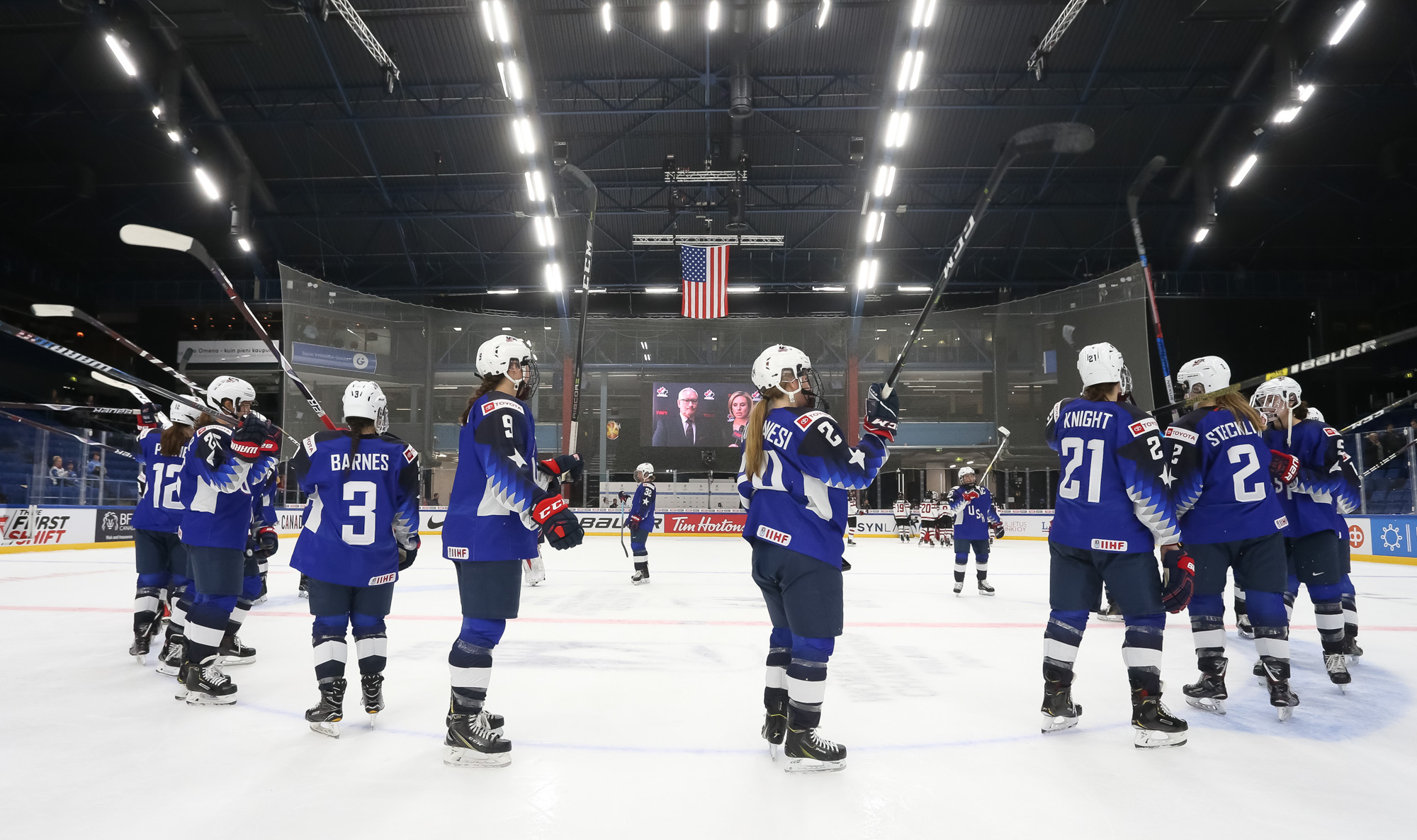 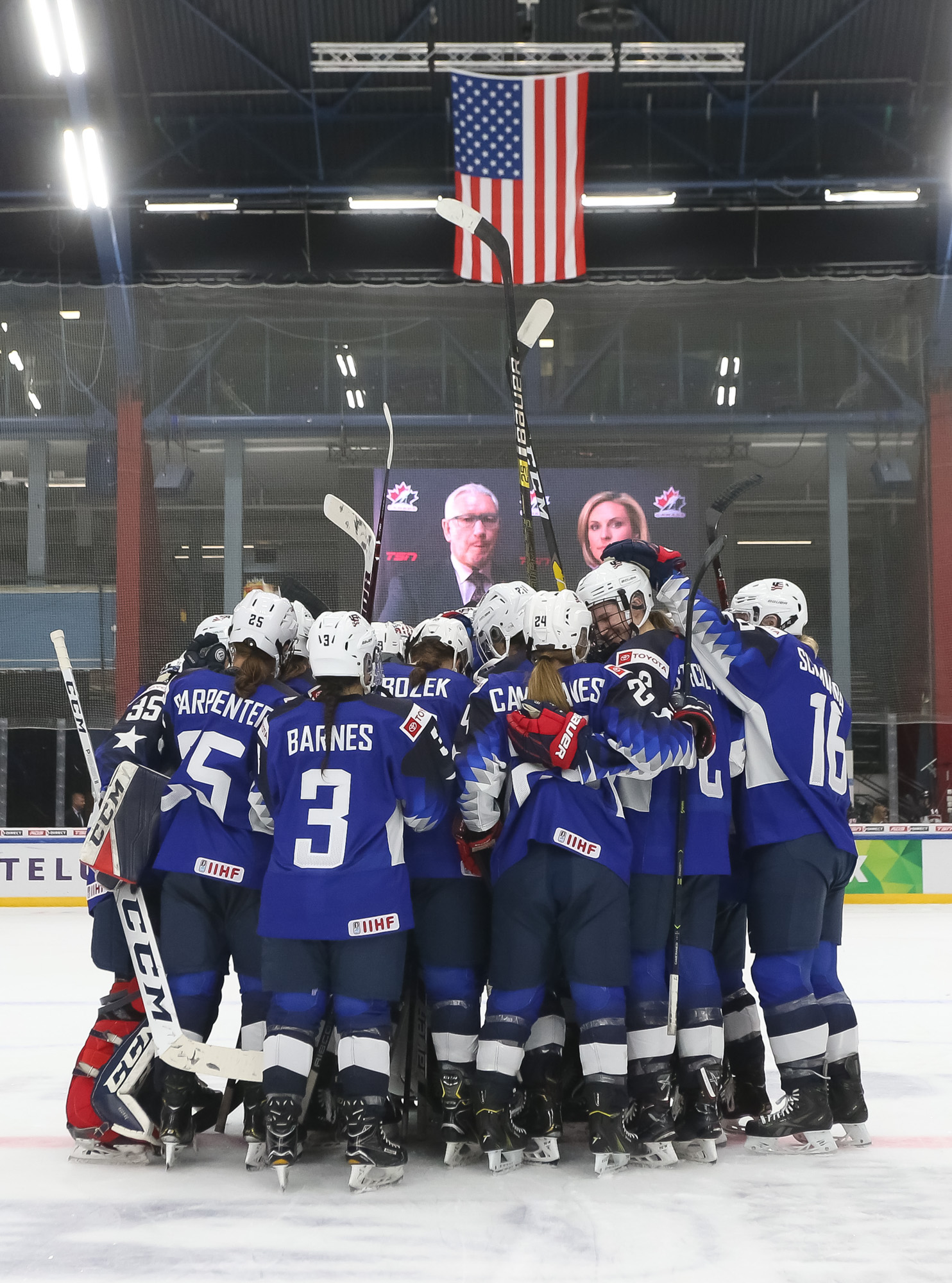