The U.S. grabbed a three-goal first-period lead and never looked back en route to a 8-0 thrashing of Switzerland on Sunday night.

After three straight losses, the Swiss will seek their first tournament win against host Finland on Monday. The Americans plan to complete a perfect round-robin against Russia on Tuesday before questing for their fifth straight world title in the playoffs.

"It was a great team win," said U.S. defender Megan Keller. "I think we came out ready to go and brought a lot of energy. So it's great when everybody's firing on all cylinders."

Dani Cameranesi led the way with two goals and an assist. Keller and Amanda Kessel both scored twice, and Alex Carpenter had a goal and an assist. Hilary Knight also tallied for the Americans, and Emily Pfalzer added a pair of helpers.

"I think there was a little bit of everything," said Kessel. "There were tips, our D getting involved. I think that was huge. Our D are an important part of our team and in our first few games, we weren't getting them involved as much. I don't know if that was the forwards' or defence's fault. But it was nice to see them in there tonight, as a huge part of our team."

Put simply, this was an ultra-daunting matchup for the Swiss against the defending Olympic and world champions. Sometimes, history says it all.

The U.S. entered with an all-time 70-5 goal difference versus Switzerland, and won 9-0 at the 2014 Sochi Olympics the last time the two sides clashed in IIHF competition. The previous meeting at the Women’s Worlds came in 2013, where Decker tallied twice in a 5-0 win.

In general, the rebuilding Swiss, who peaked with 2014's Olympic bronze, have struggled with the pace in Group A. Their only goal came from Evelina Raselli in the 2-1 loss to Russia. Alina Muller, named Best Forward in PyeongChang with 10 points, has been limited to a single assist.

Swiss captain Livia Altmann summed up her team's woes in Sunday's game: "They are obviously so quick and you cannot give them one second. It was really important for us to play a solid defensive game. We were able to do that sometimes, but as soon as we didn't, they just scored right away."

For the Americans, Maddie Rooney got her first IIHF start in net since winning the gold medal game shootout against Canada in PyeongChang. En route to her second career Women’s Worlds shutout, the 21-year-old University of Minnesota-Duluth Bulldogs star was far less busy than her Swiss counterpart. Predictably, the U.S. peppered Janine Alder with shots from the get-go. The final count was 57-6.

"We trust Maddie back there," said Carpenter. "I know she didn't get too many shots. But those are tough games sometimes, and she made a couple of great saves after not seeing much action. That was really awesome to see from her."

Of Bellamy's absence, Keller said: "It's definitely different. She's one of our veteran leaders back there, somebody we can always look to. It's nice for her to get some rest. She played a lot of minutes last night [in the 3-2 win over Canada]. We'll be happy to have her back soon."

For Switzerland, scoring forward Lara Stalder was scratched again, still unavailable due to a shoulder injury.

Asked whether Stalder might yet return, Altmann said: "Unfortunately, I don't think so. But she's great to be here with the team. She's great at motivating everyone."

Carpenter gave the U.S. a 1-0 lead with her second goal of the tournament at 3:41. Swiss defender Lara Christen let the puck trickle off her stick while starting the breakout. The U.S.'s 2014 Olympic goals leader pounced like a lion on a warthog in a National Geographic special, powering to the net and jamming it past Alder’s right skate.

"It was just a little turnover," Carpenter said. "I was coming off the bench and was able to just get around. We did a good job of pressuring all night just like that. That proved to be really helpful for us in the end."

It was 2-0 at 9:51 when a pinching Pfalzer skated to the goal line and fed a cunning cross-pass to an oncoming Cameranesi, who deked and slid it in.

At 15:02, during an American power play, Keller moved in to execute a quick give-and-go with Brianna Decker, stationed by Alder’s right post, and pumped the puck past the goalie’s right shoulder.

Life got no easier for the Swiss in the second period. It took just 52 seconds for Kessel to capitalize on utter confusion around Alder’s cage for a 4-0 lead. Swiss cow bells clanged futilely in the stands. They were no match for the repeated choruses of "Chelsea Dagger" by the Fratellis, the U.S. goal song.

"I think no matter who we're playing or what day it is, we're trying to stick with our systems and play how we would against anybody," said Kessel.

The Stars and Stripes onslaught continued in the third period. Known for possessing the heaviest shot in women's hockey, U.S. blueliner Megan Bozek fired a rising blast from the centre point and Annie Pankowski, standing in front, tipped it in at 7:00. However, after an extensive review, the goal was voided due to a high stick.

Rooney was forced to make a rare quality stop a minute later when the Swiss came calling on the rush. At 10:05, Kessel showcased her lethal release, one-timing Carpenter's centering pass from the faceoff circle past Alder, for a 5-0 lead.

On another U.S. power play, Keller scored the sixth U.S. goal on a great one-timer from the right faceoff circle with 5:21 remaining. With 3:59 left, Knight tipped Emily Pfalzer's shot home for a 7-0 lead and her third goal of the tournament.

Looking ahead to facing the host nation, Altmann noted: "Finland is a great team too. We know what we're facing. If we're learning from the mistakes we did today and play another full 60 minutes with solid defence, I think everything is possible." 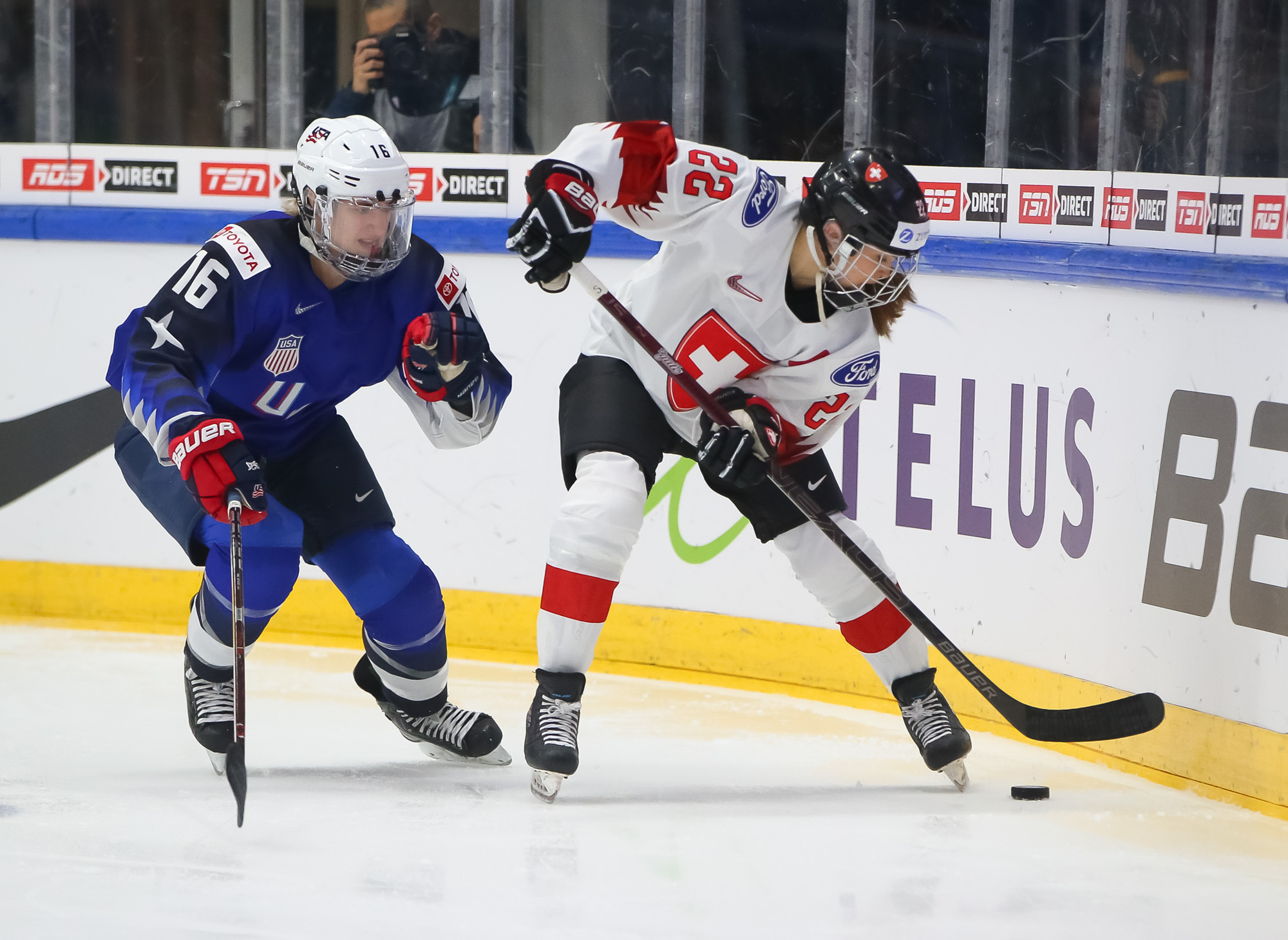 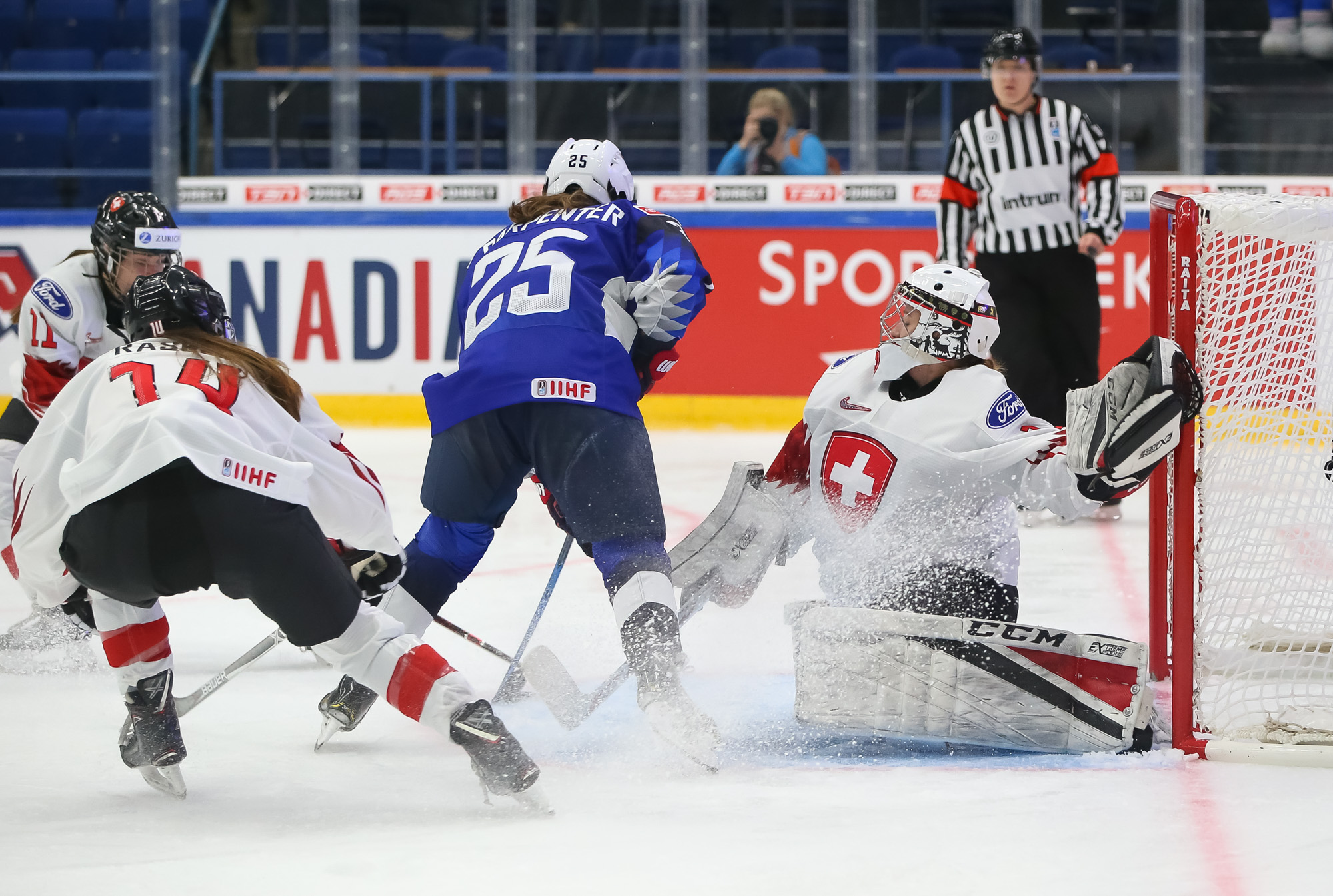 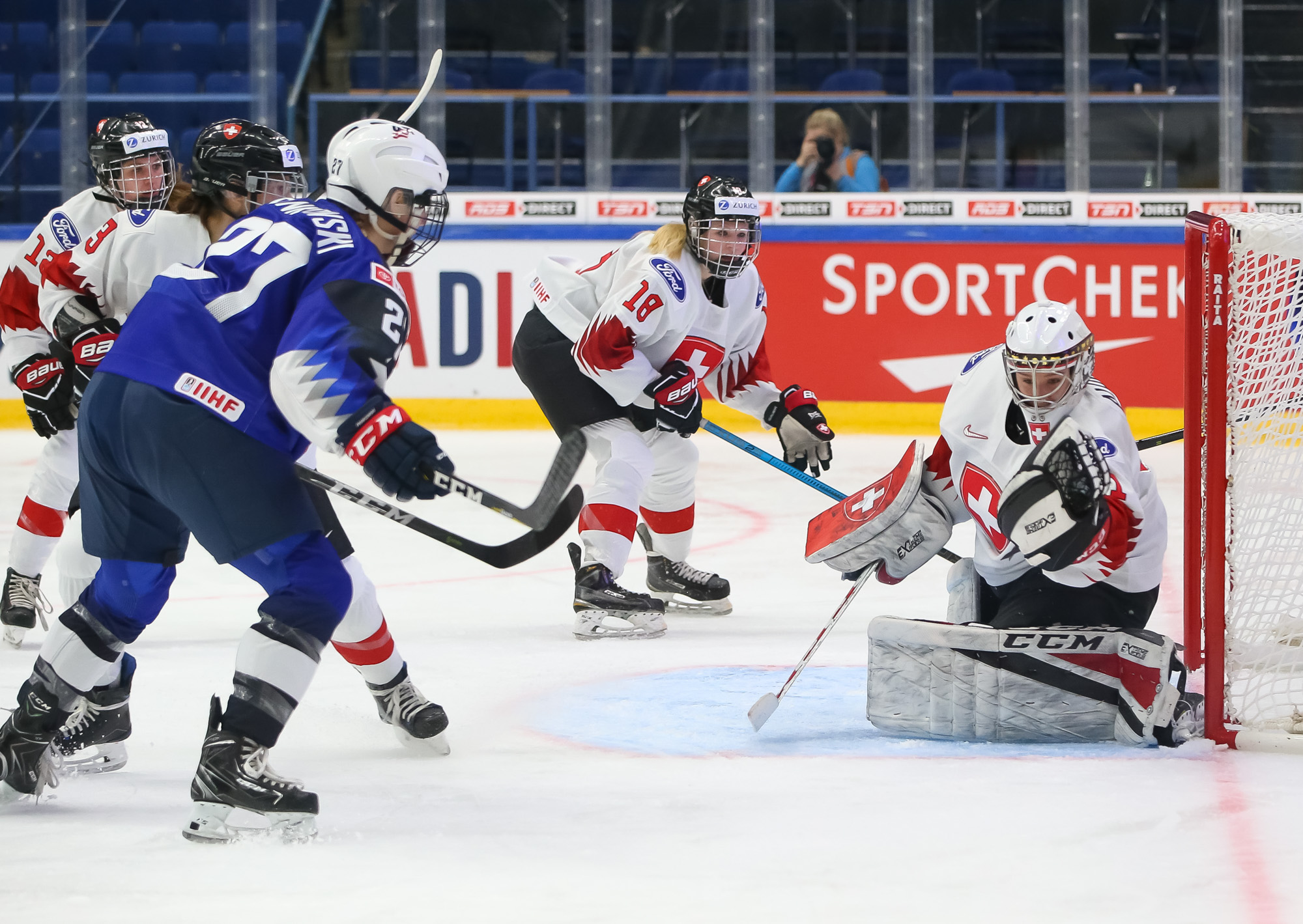 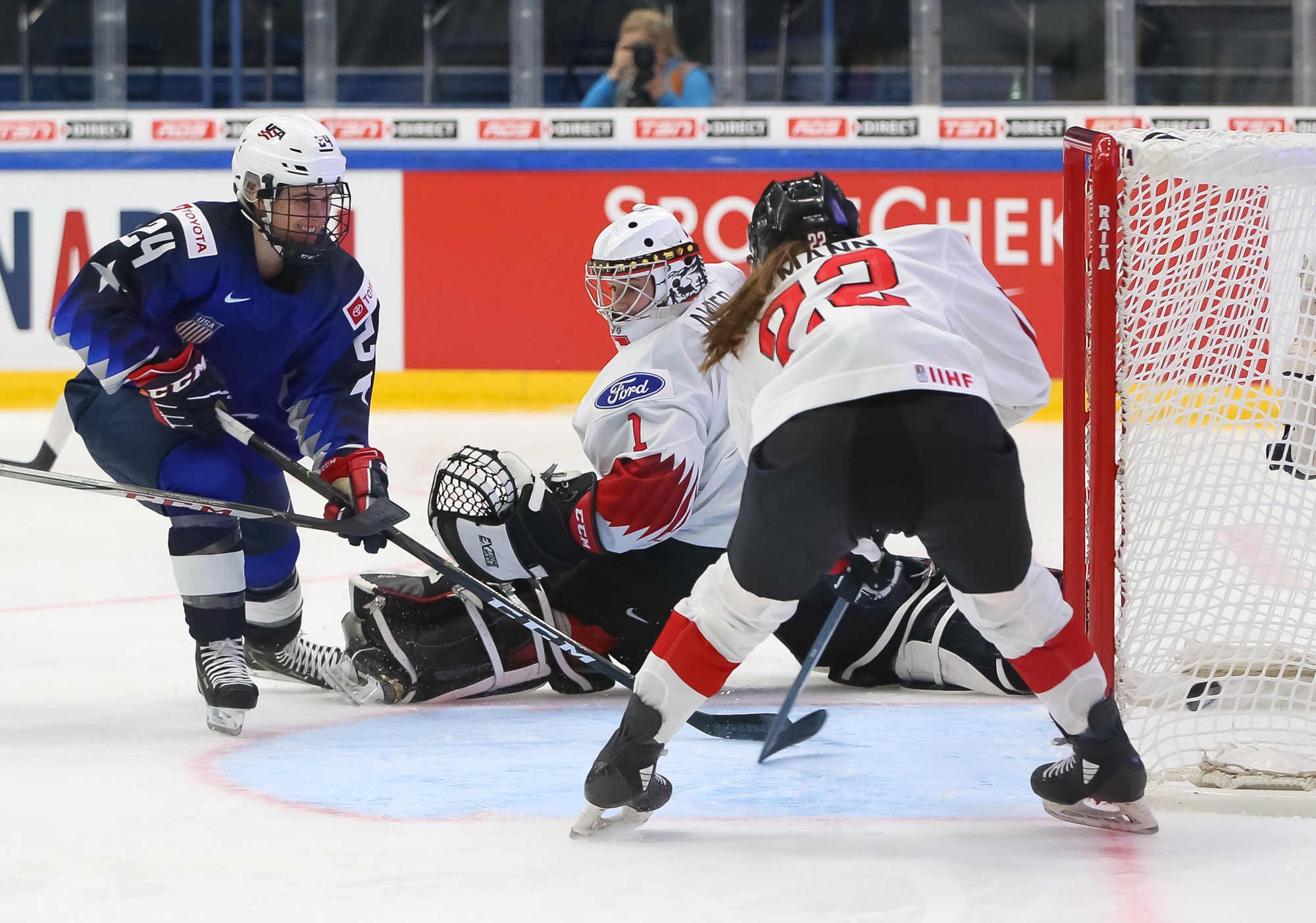 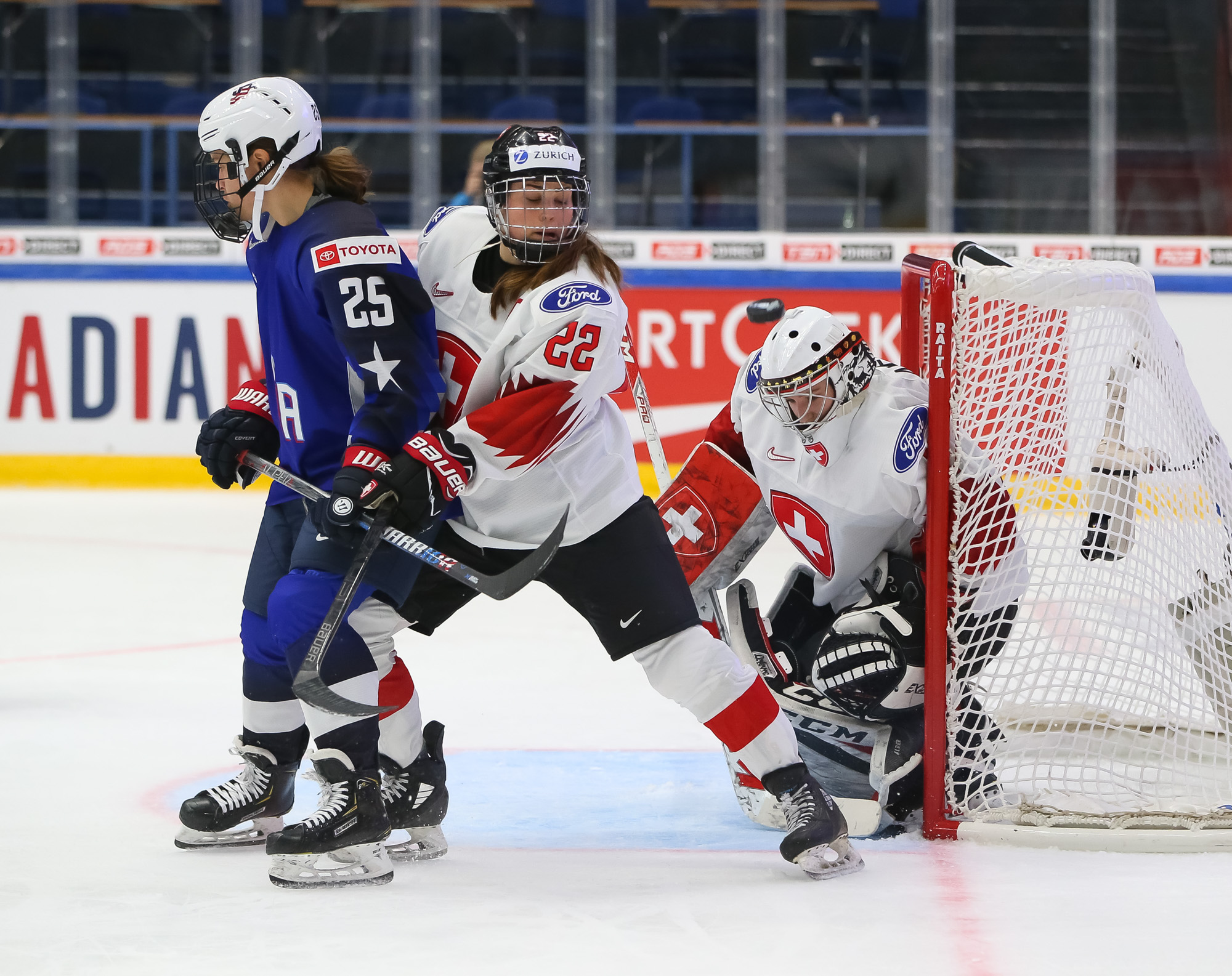 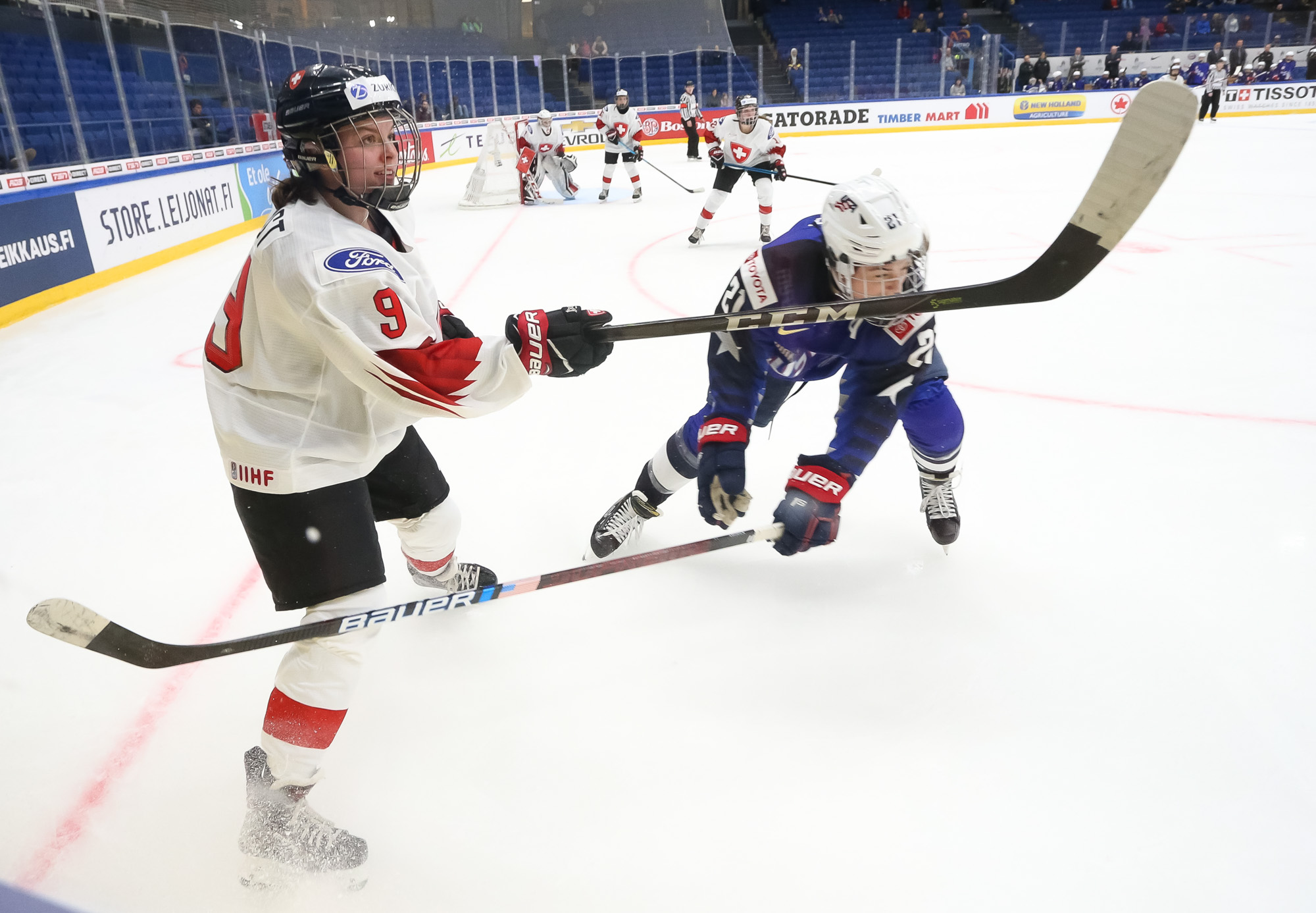 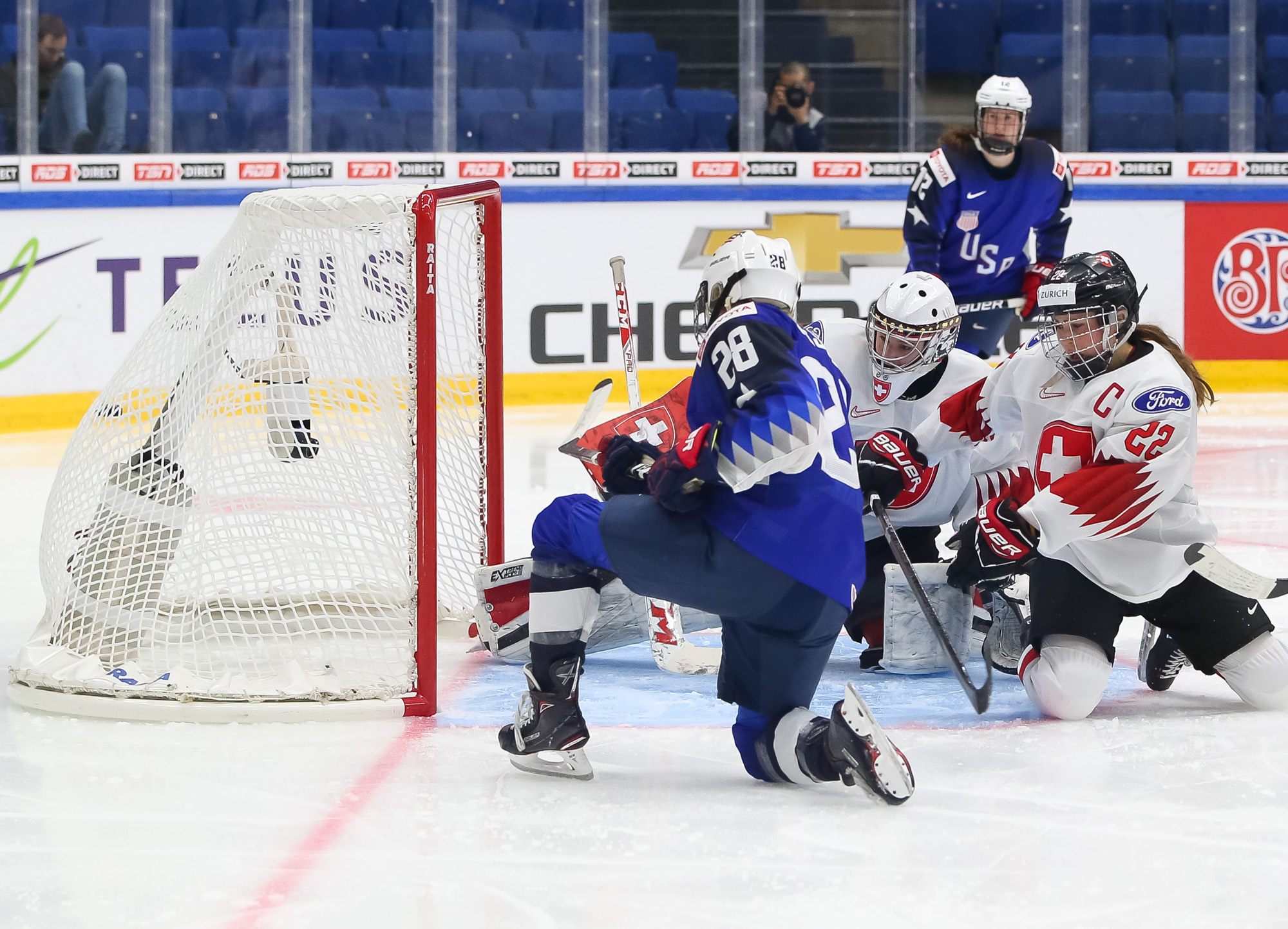 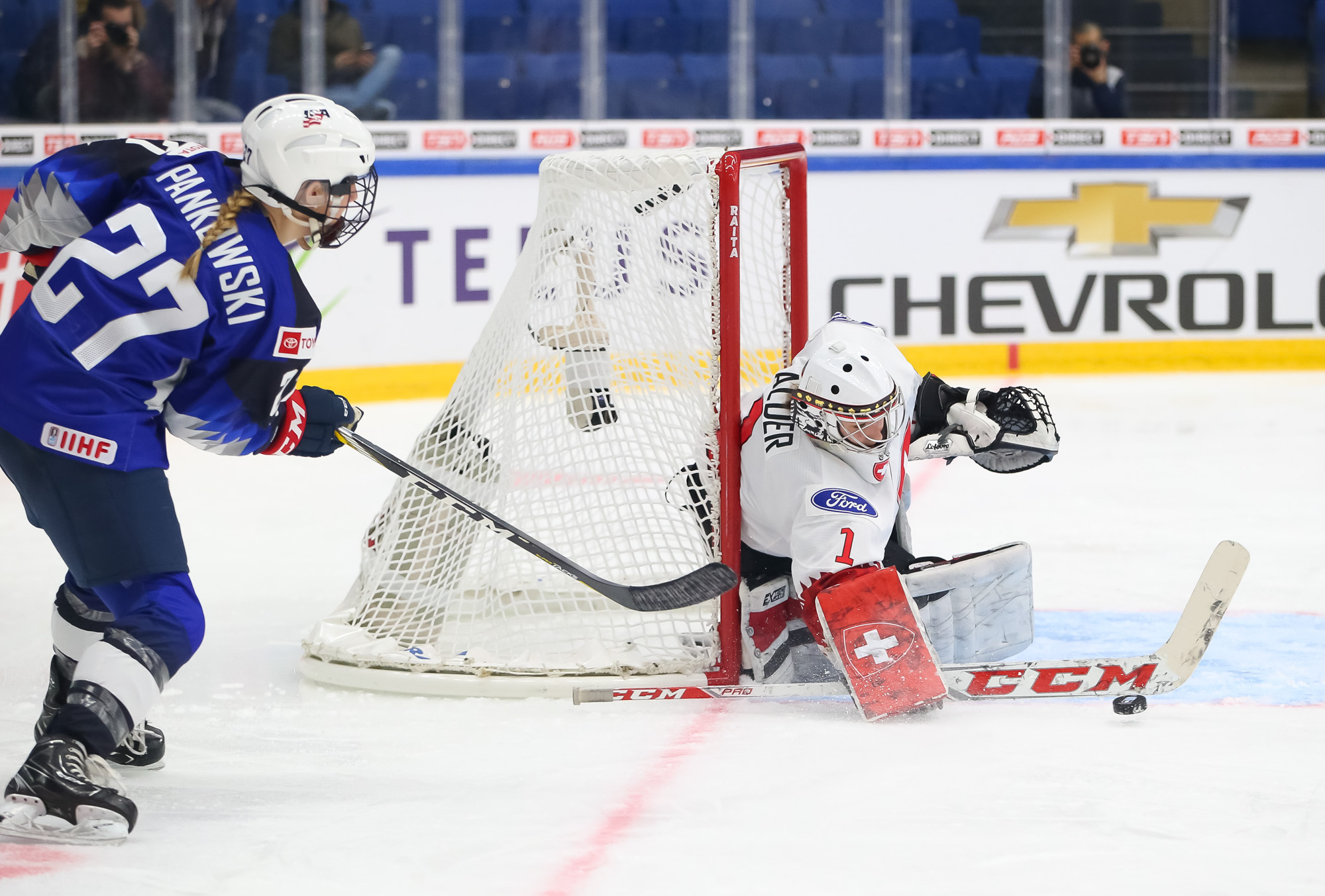 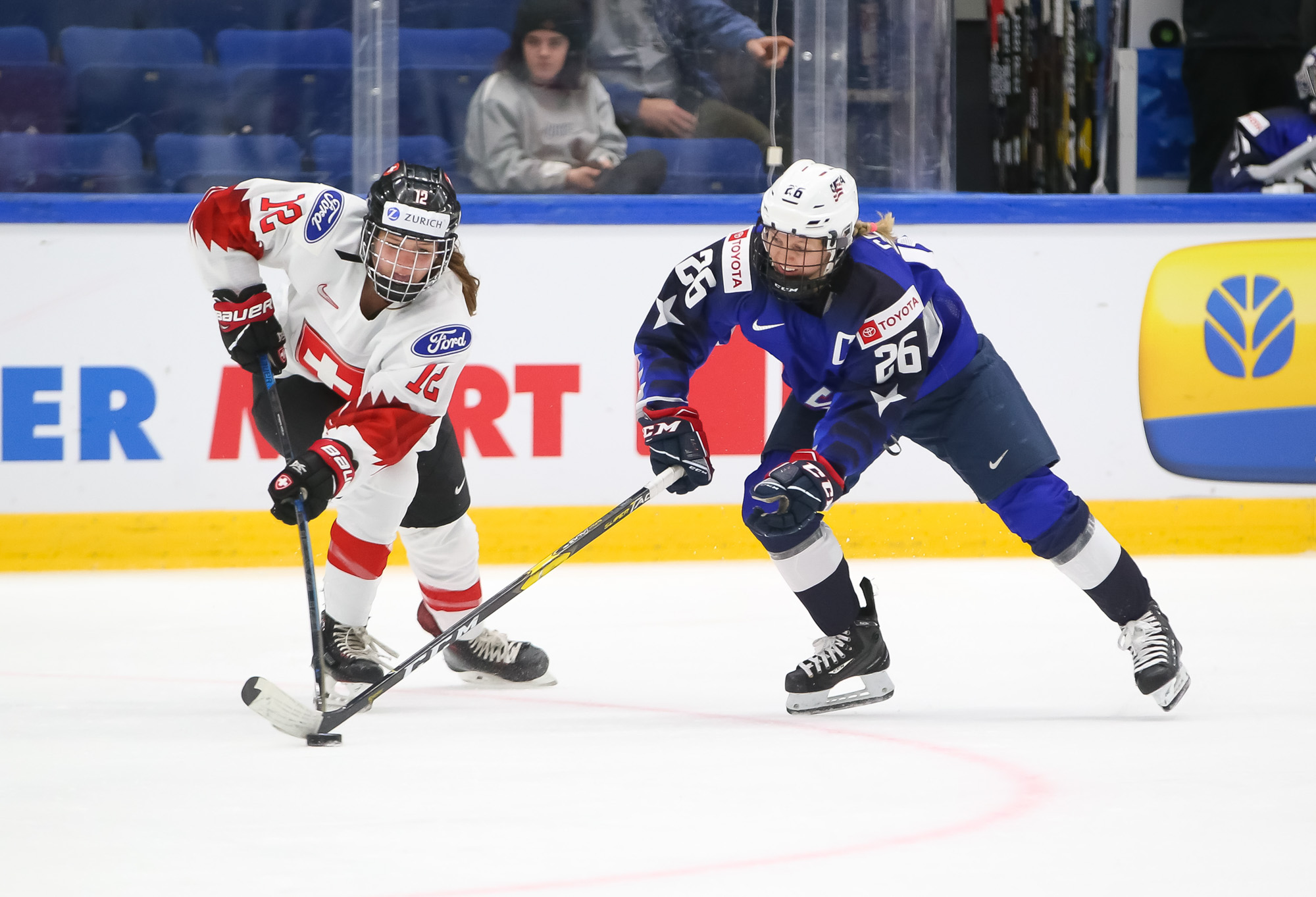 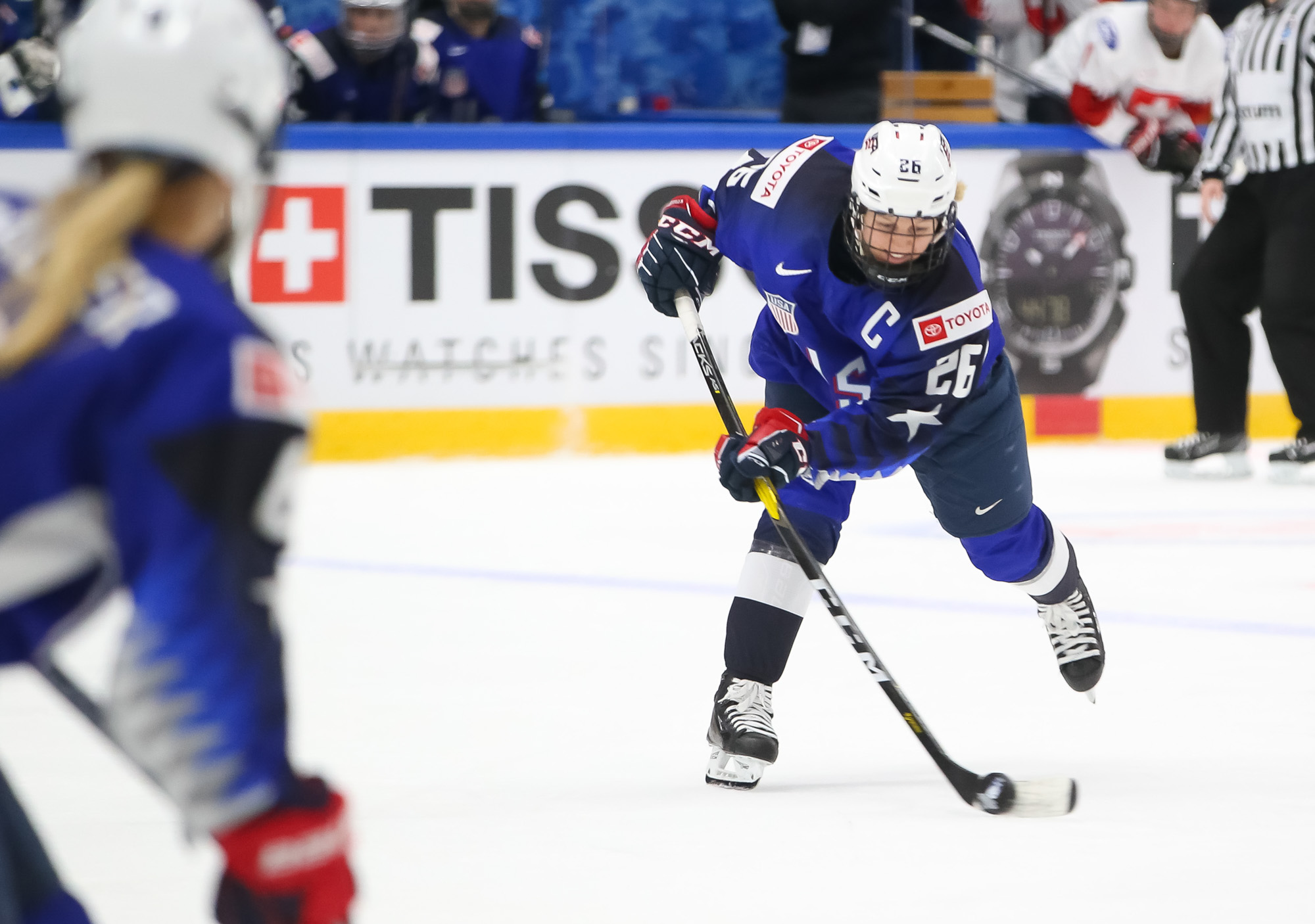 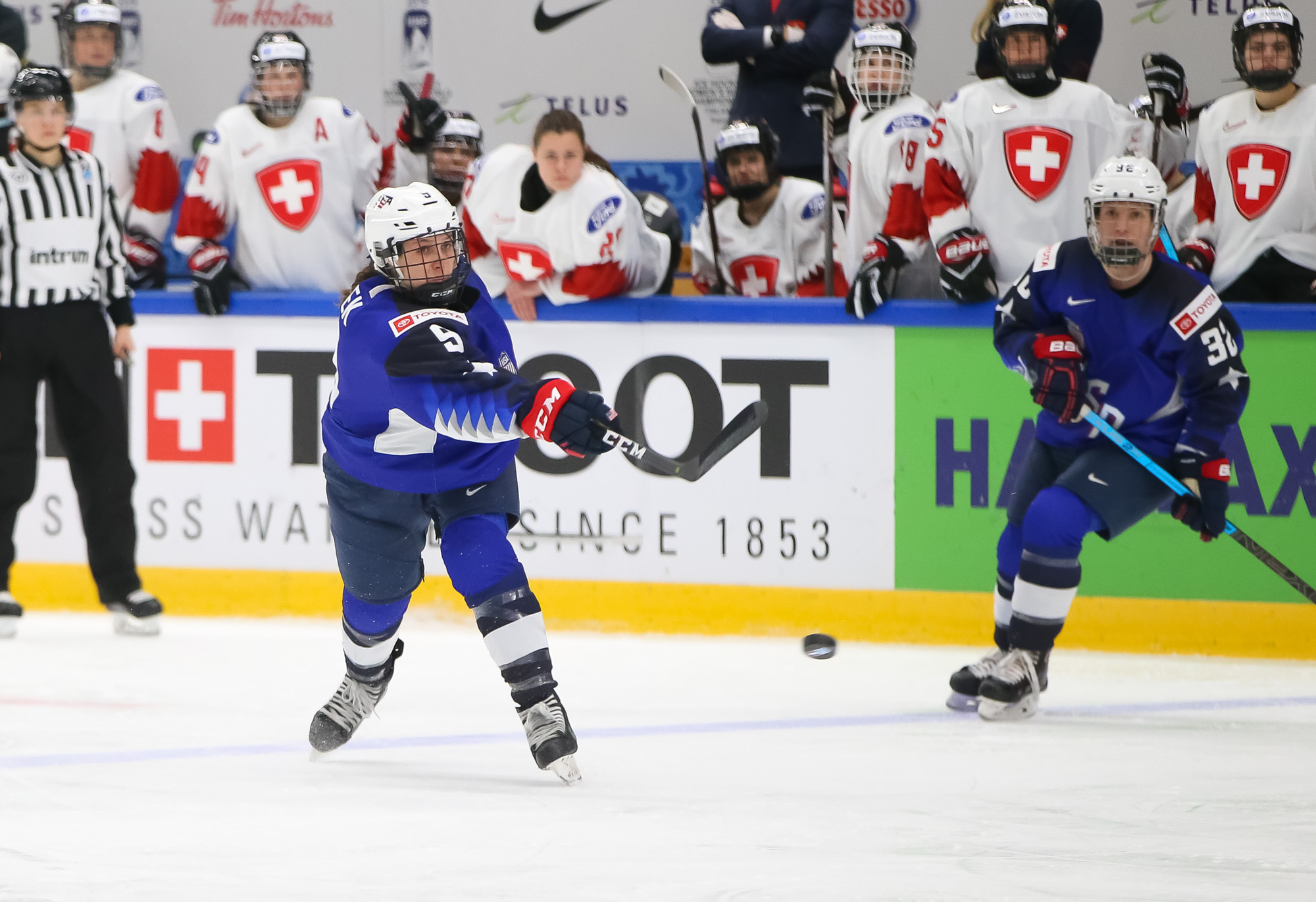 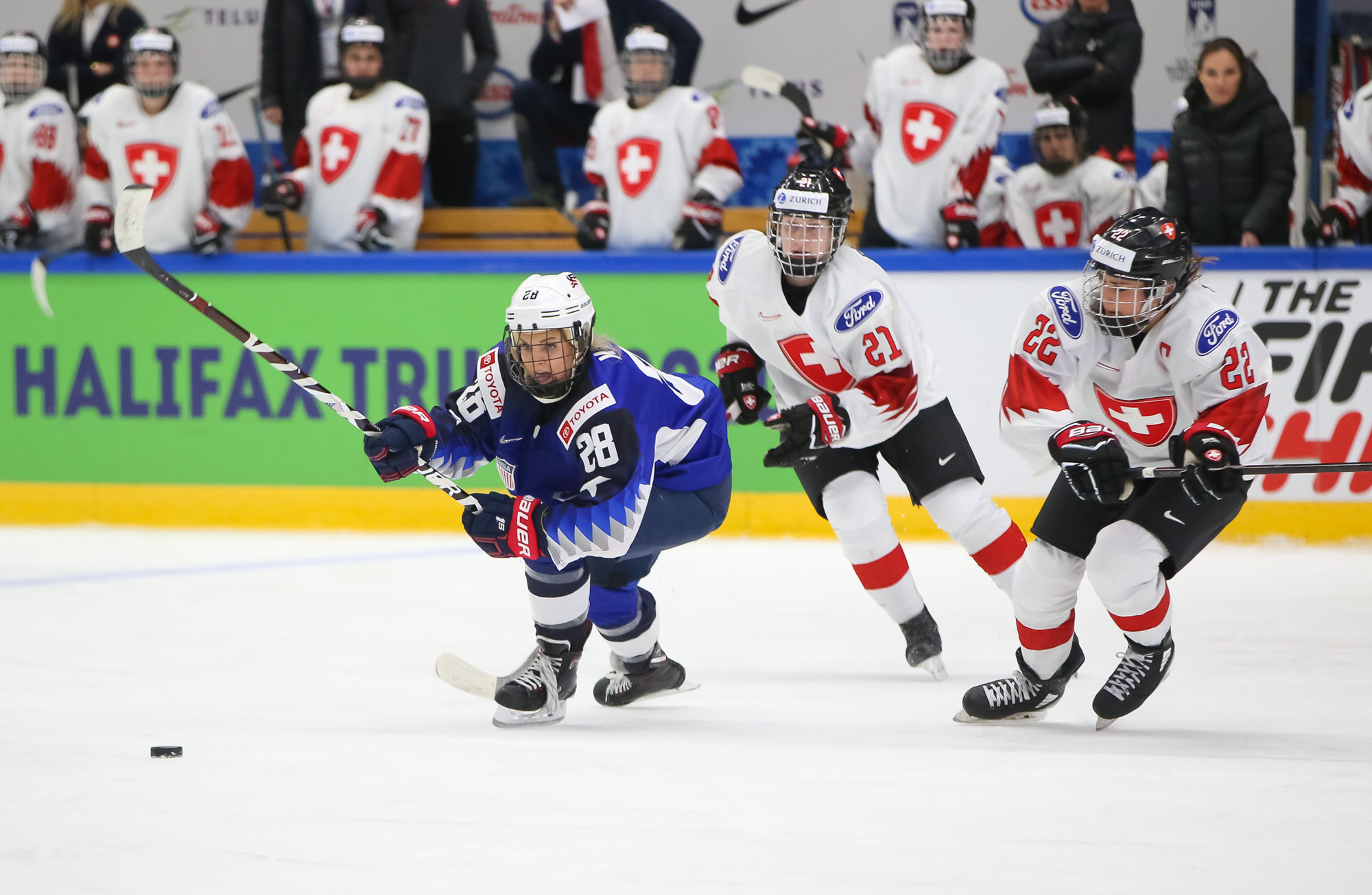 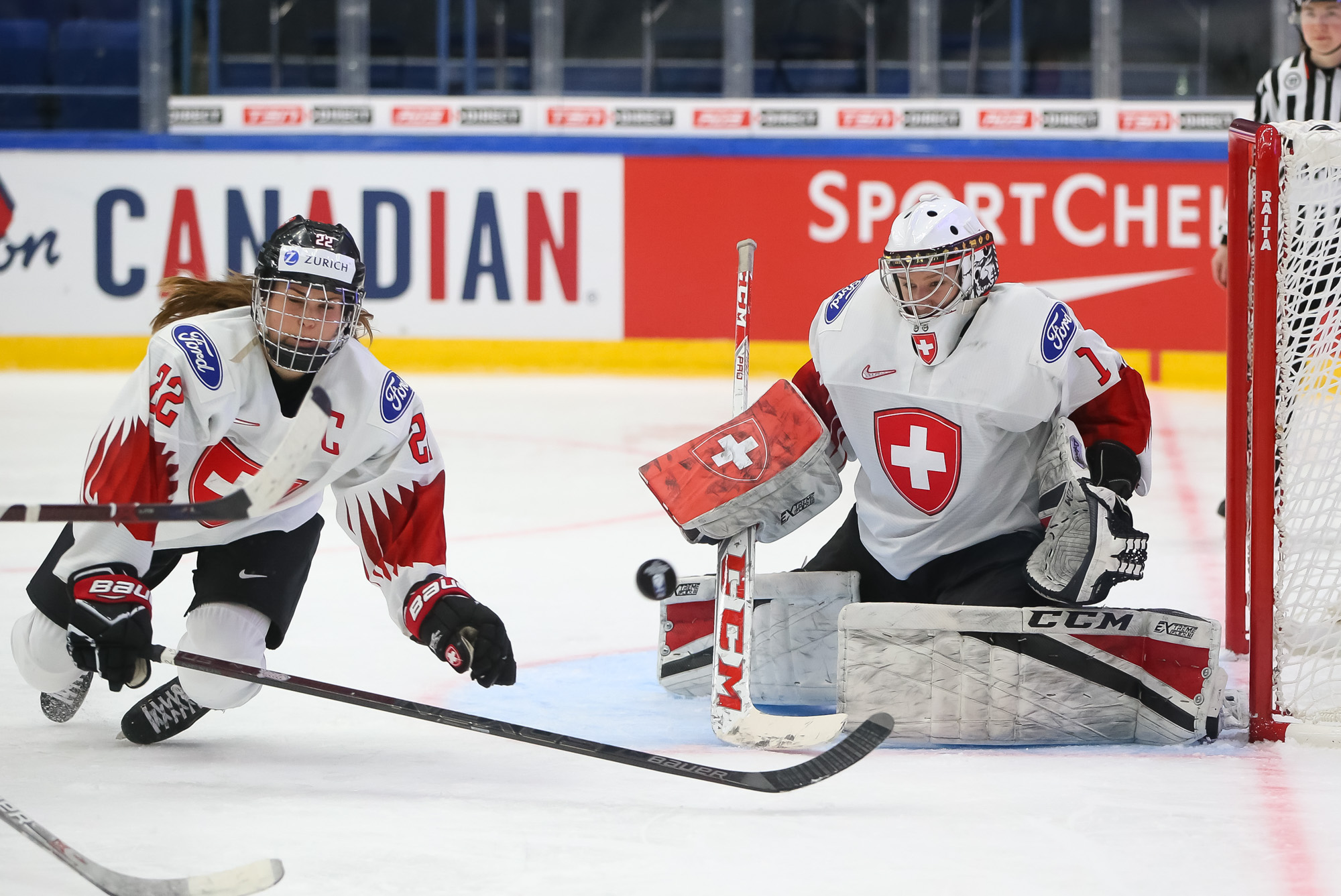 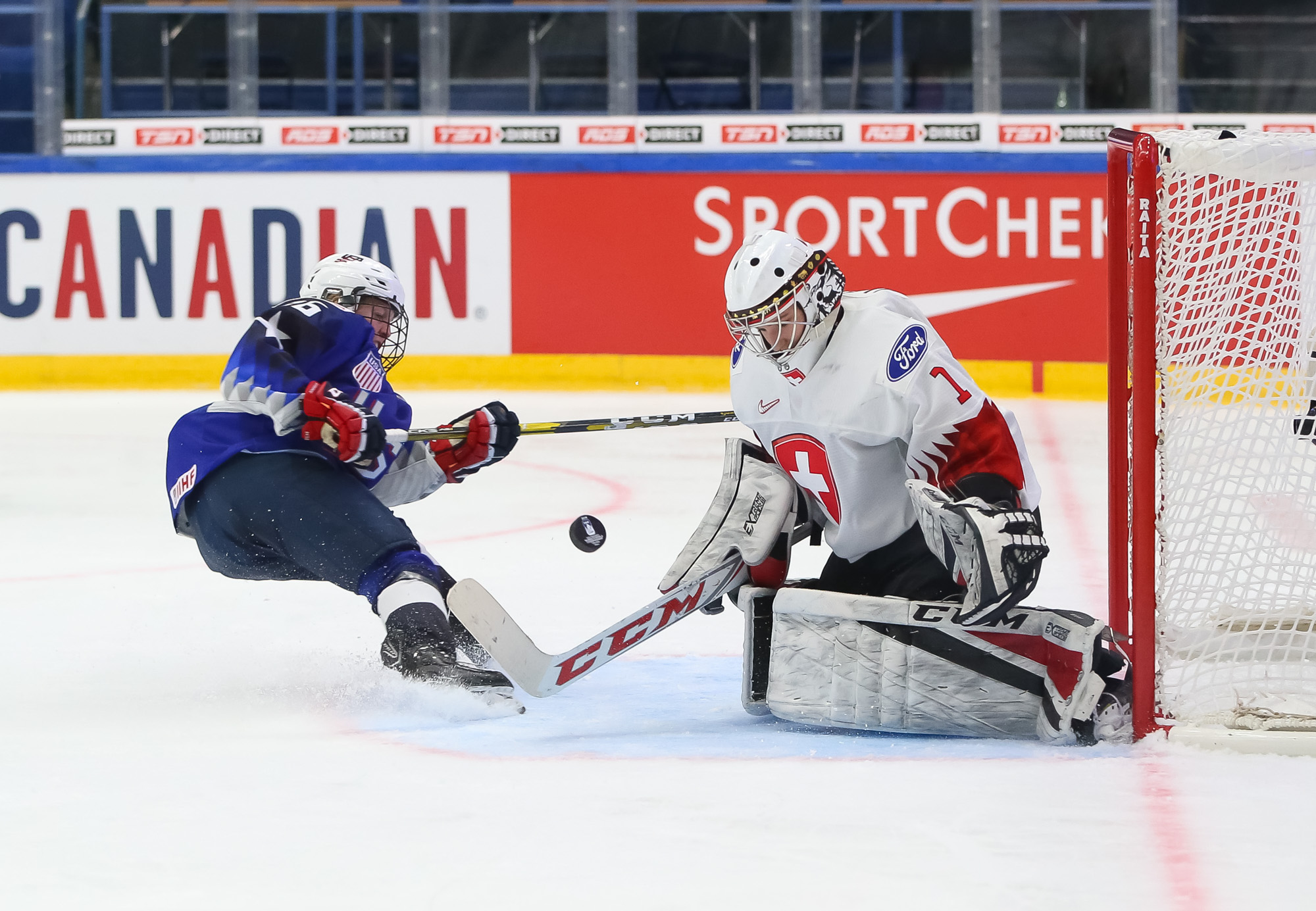 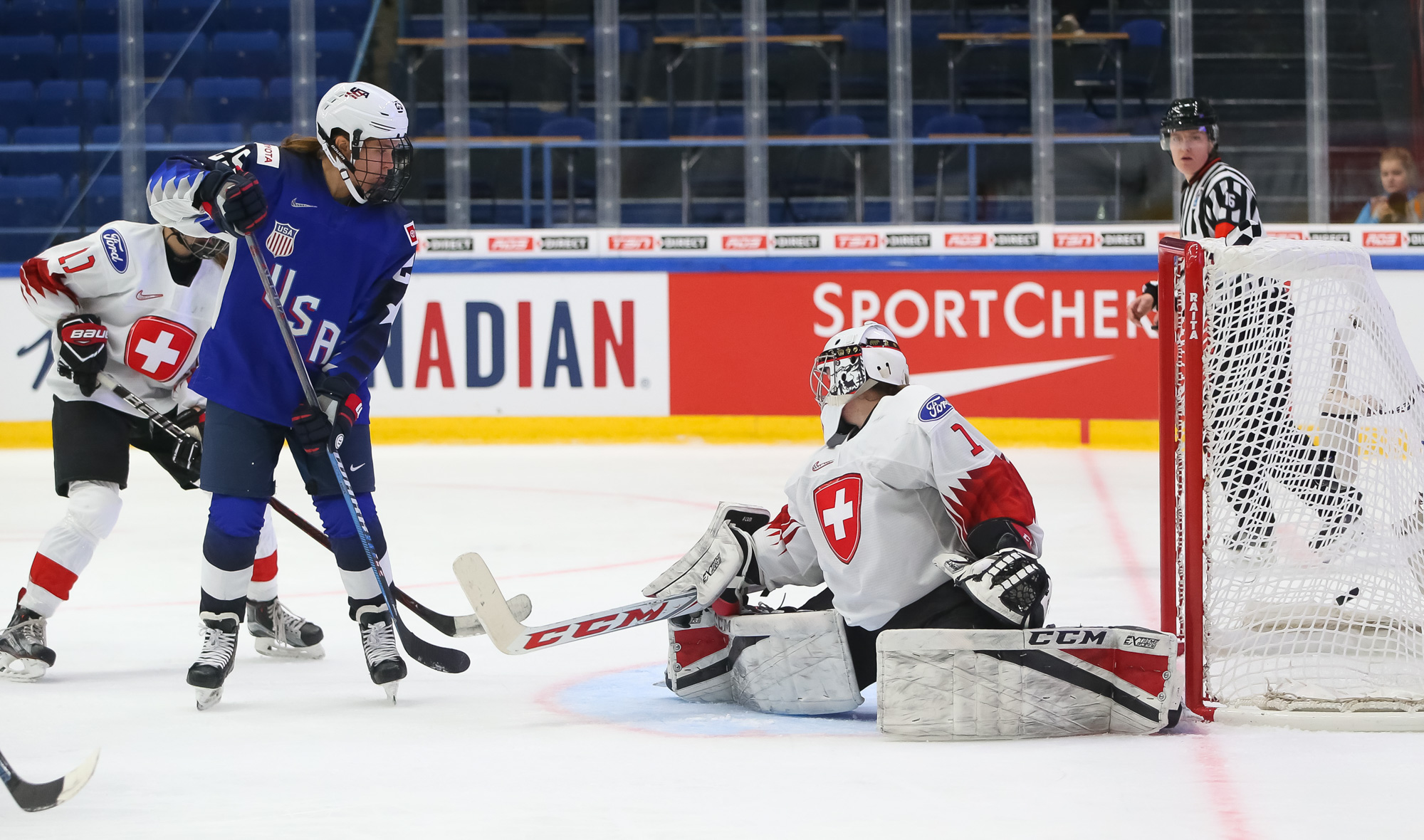 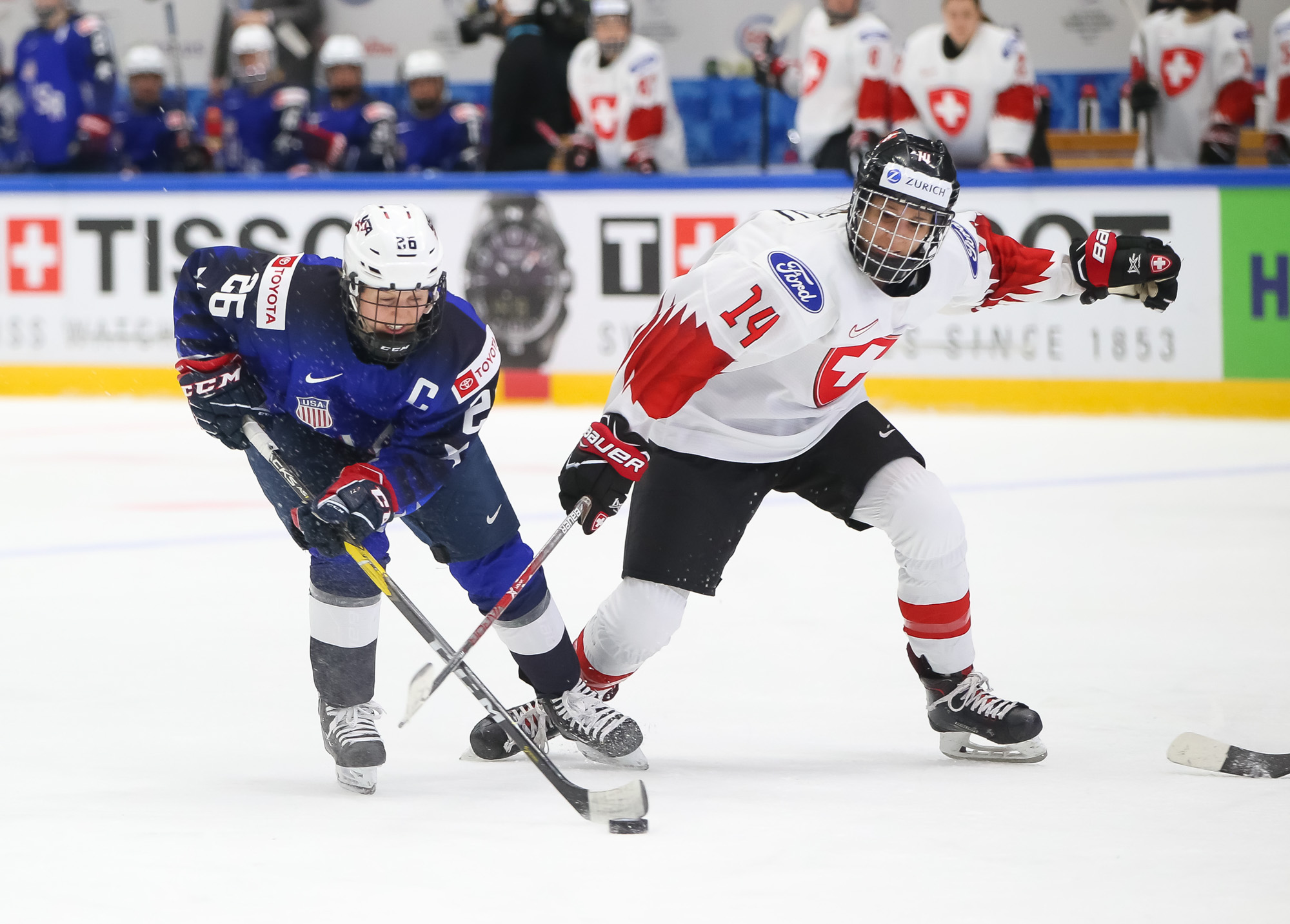 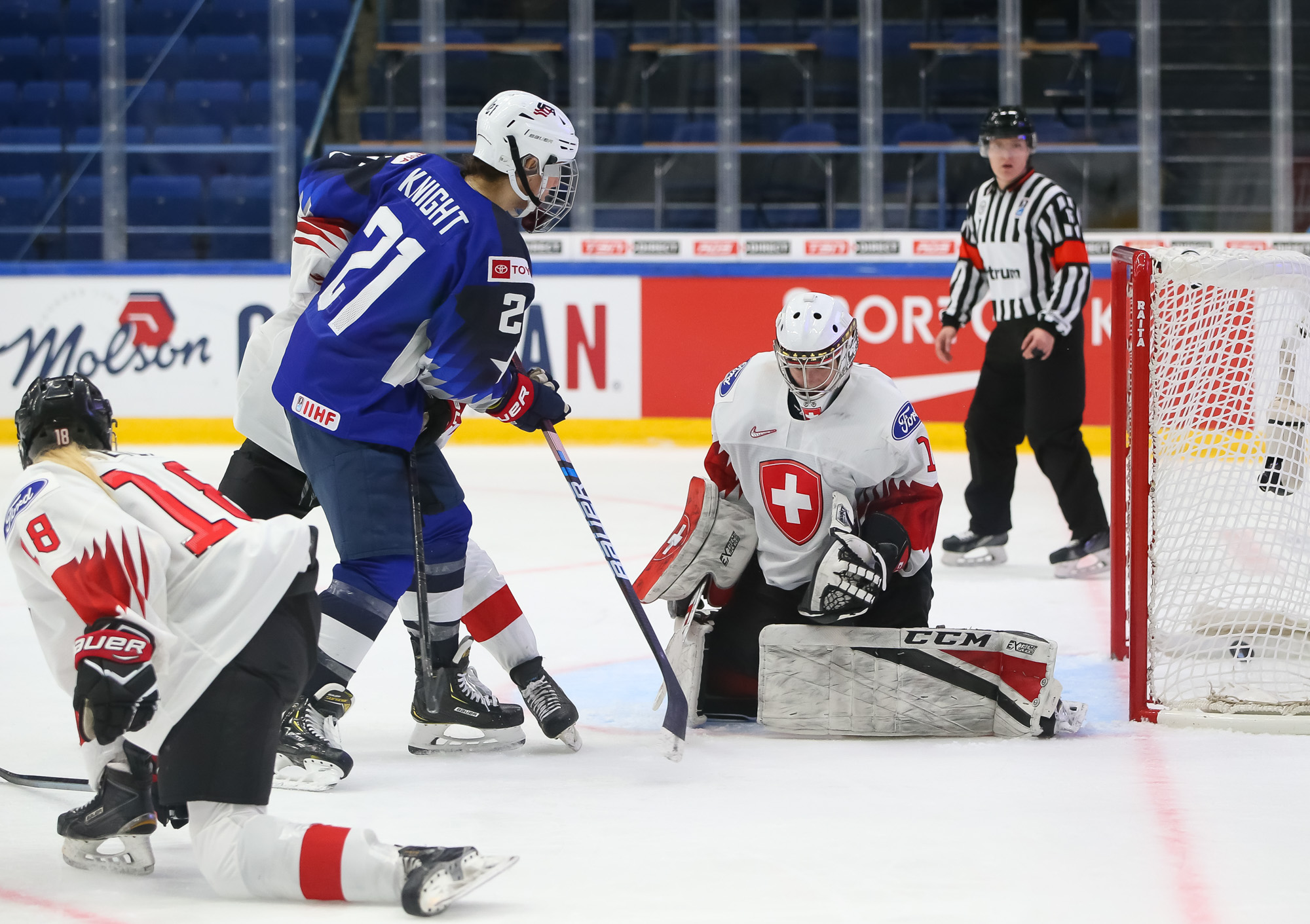 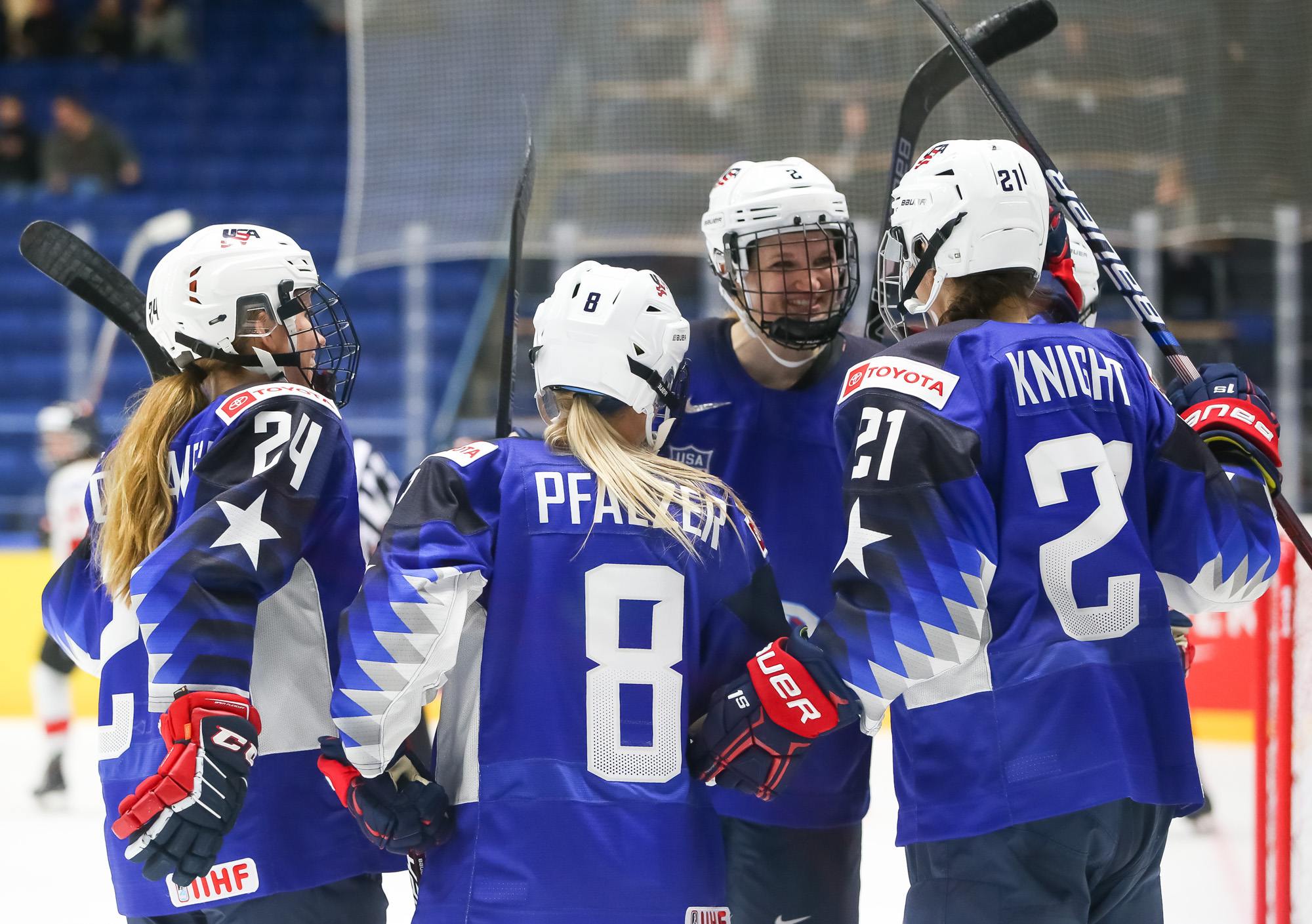