The score was a little closer than expected, but the end result was what the U.S. needed in a 4-0 quarter-final win over Japan in Thursday's first quarter-final.

The Americans, the defending Olympic champions, have won four straight Women’s Worlds and seven of the last eight. They advance to face the Russia-Switzerland quarter-final winner in the semi-finals on Saturday.

"It was a different game than we're used to," said Hilary Knight. "Japan showed up and they're an extremely disciplined team. It's fun to see how well they've done in this tournament and continue to do. But a win's a win, and we got it."

Knight scored the opening goal for the Americans. The two-time tournament MVP, who got the gold-medal overtime winner against Canada in 2017, now has 41 career Women's Worlds goals, just three shy of Cammi Granato’s all-time tournament record (44).

Asked about her chance to make history, Knight said: "Oh, wow! I didn't even know that. It's obviously...Cammi Granato is instrumental to our sport in the U.S., in the world. Kendall [Coyne Schofield] and I grew up going to her hockey camp, and she was someone we looked up to and continue to look up to tremendously. So it's a huge honour to be able to wear #21 and continue to try to fill her shoes. She's just a great player and a great person."

Dani Cameranesi, Cayla Barnes, and Coyne Schofield had the other American goals. The U.S. brought a balanced attack as well as a perfect record into this game, with every skater having recorded at least one point in the preliminary round.

U.S. goalie Maddie Rooney, who backstopped America to Olympic gold in PyeongChang, had a quieter outing than Japan's Nana Fujimoto, but still had to make some quality stops en route to the shutout. The Americans outshot Japan 53-10.

This was the first time the Americans have ever played in a Women’s Worlds quarter-final, as they received semi-final byes on all previous occasions prior to the new 10-team format. It was also an historic first for Japan.

"It was such a tough game, but a good challenge for us," said Japanese captain Chiho Osawa. "It was a very good experience for us, because we didn't play against the USA for 10 years."

Give the hard-working, well-conditioned Japanese credit: they managed to hold the Americans off the scoreboard for longer than any other team at this tournament except Finland in the 6-2 opening win.

World Women
USA vs. Japan (QF) - 2019 IIHF Ice Hockey Women's World Championship
The score was a little closer than expected, but the end result was what the U.S. needed in a 4-0 quarter-final win over Japan in Thursday's first quarter-final.
USA JPN 11 APR 2019

Despite not getting shots on goals, coach Yuji Iizuka's players did a good job with active sticks and taking away shooting lanes. Fujimoto turned away Annie Pankowski from the slot and Knight from the faceoff circle. But the scoreless draw couldn’t last.

Knight drew first blood at 16:48 when Michelle Picard’s cross-ice pass deflected off a leg to her and she was left unguarded to Fujimoto’s right. Often dubbed the face of women's hockey, Knight has risen to the occasion here in Espoo, scoring in every game so far.

Shots were 22-2 for the U.S. in the first, although at times it was a case of volume over quality.

The Japanese persevered in the second period, despite not capitalizing on an early power play with Kelly Pannek off for delay of game. Haruna Yoneyama came down the left side and dinged one off Rooney’s helmet, and moments later, she tried to stuff one inside the post.

"They're great skaters and they move the puck well," Barnes said. "They worked their tails off. So I think they played an outstanding game and they pushed us, definitely."

Japan didn’t take its first penalty until 8:31 of the second period with Sena Suzuki off for tripping. That proved costly. Megan Keller stepped in to blast the puck at Fujimoto, and Cameranesi converted the rebound for her third goal of the tournament at 9:22.

The U.S. continued to outshoot Japan, but still hadn't fully hit its stride. With under five minutes left in the middle frame, Yoneyama had Japan’s best chance of the game when she got a clearcut breakaway, but Rooney stayed on her feet and Yoneyama’s shot went into her pads.

"I was on the bench, so I hoped for her," Osawa said of Yoneyama's chance. "Hopefully next time she can get to score!"

At 2:51 of the final stanza, Barnes killed any hopes of a Japanese comeback with the third U.S. goal. The 20-year-old rearguard, who won Olympic gold in PyeongChang last year, jumped in and was perfectly positioned to take Amanda Kessel's cross-ice pass from the left faceoff circle and put it over Fujimoto's glove.

"I just came down the back end," Barnes said. "I recognized no one was really covering me and Kess made a beautiful play through the crease. I just put it in. I think us working together is what we were looking for all game. We weren't really connecting. Just to get that goal was nice."

At 10:36, Coyne Schofield corralled a failed Japanese clearing attempt and banged it home to make it 4-0 unassisted. The U.S. captain leads her team with eight points.

The only previous Women’s Worlds meeting between the U.S. and Japan came on 4 April 2009. The U.S. won 8-0 with a Knight hat trick and a 74-8 edge in shots on goal in Hameenlinna, Finland. However, this was a closer affair, reflecting how international women's hockey and the Japanese program in particular has grown in the past 10 years.

"It's a good game for us," Osawa said. "We lost just by four goals. So it's nice D-zone [work], and we had a chance sometimes to score. A nice time for us."

With this game, Knight tied Jenny Potter and Angela Ruggiero for the most all-time Women’s Worlds games played by an American (50).

Of the U.S.'s focus moving forward, Knight said: "It's just focusing on little details for us and cleaning up some little things, making sure we're trending in the right direction as we move forward in the tournament. Obviously our goal is to play the last night of the tournament. We've got some hurdles before then." 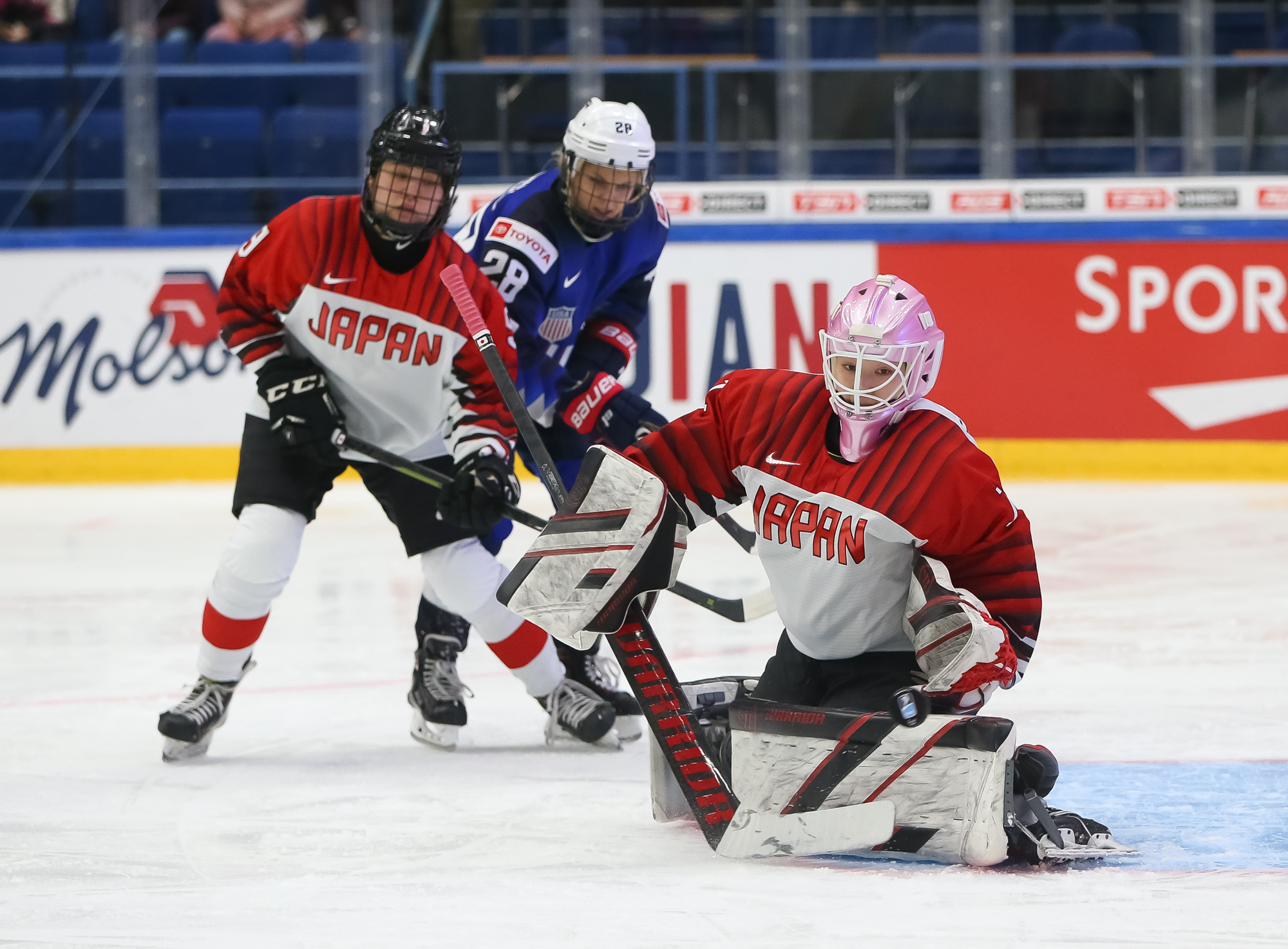 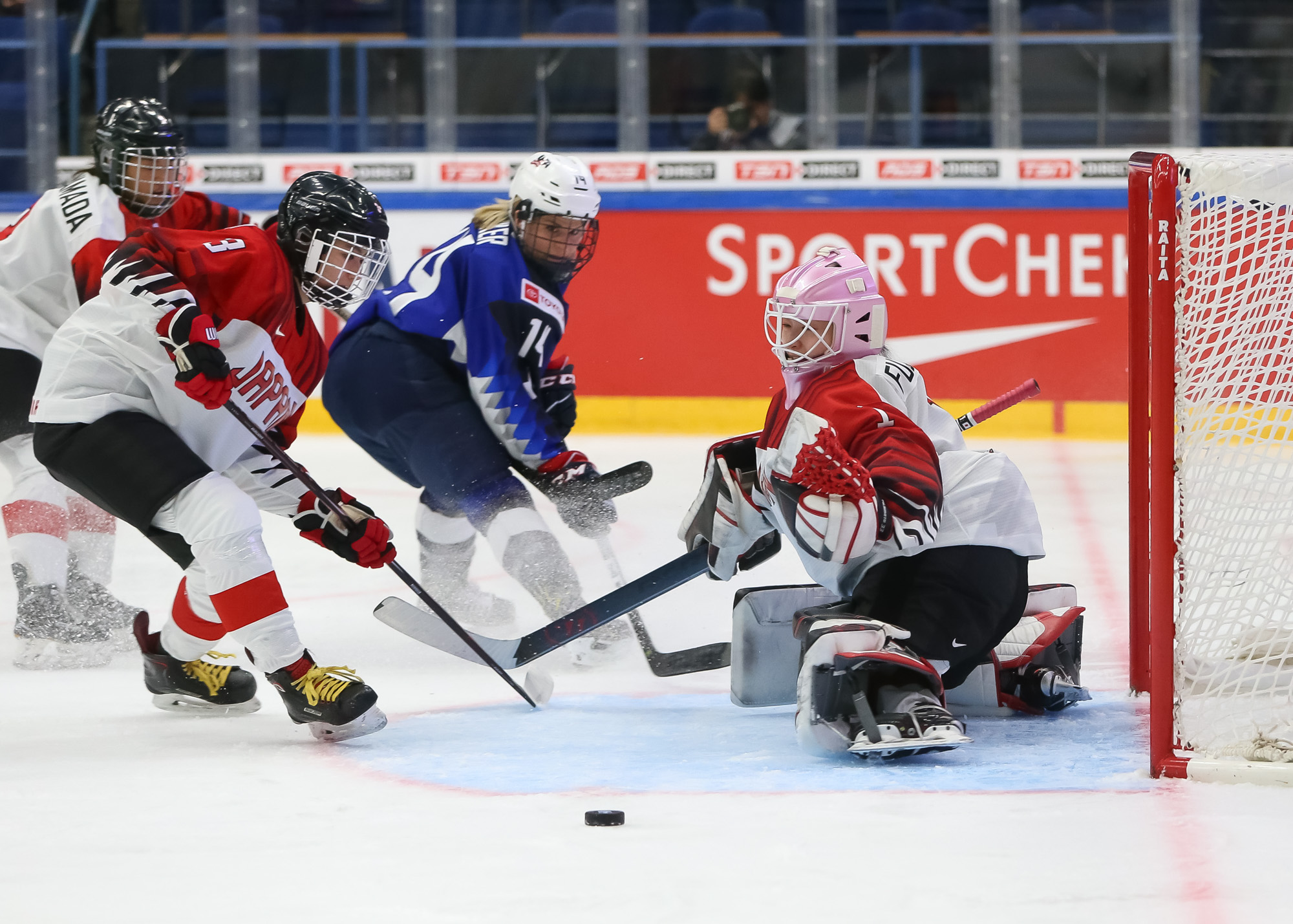 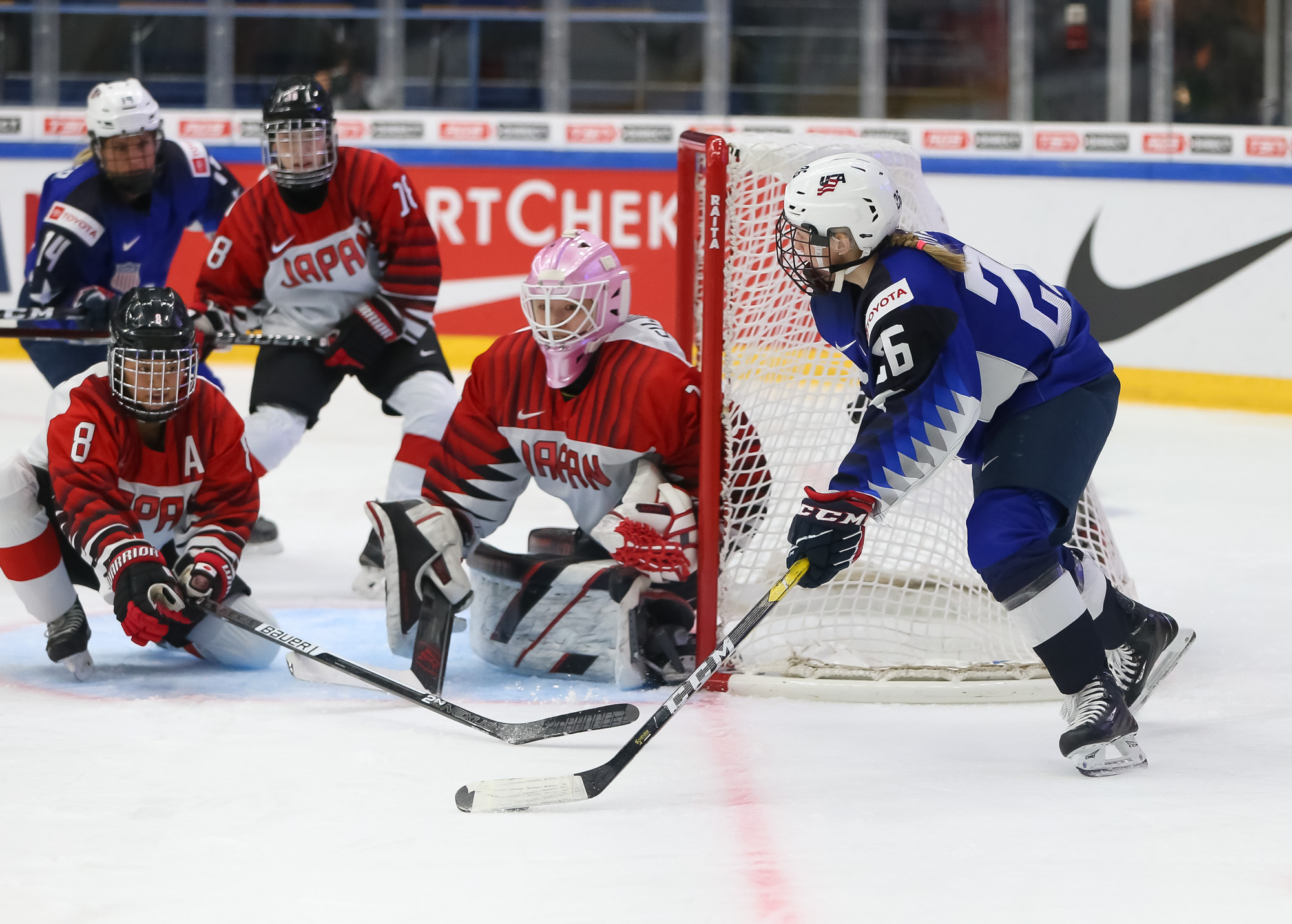 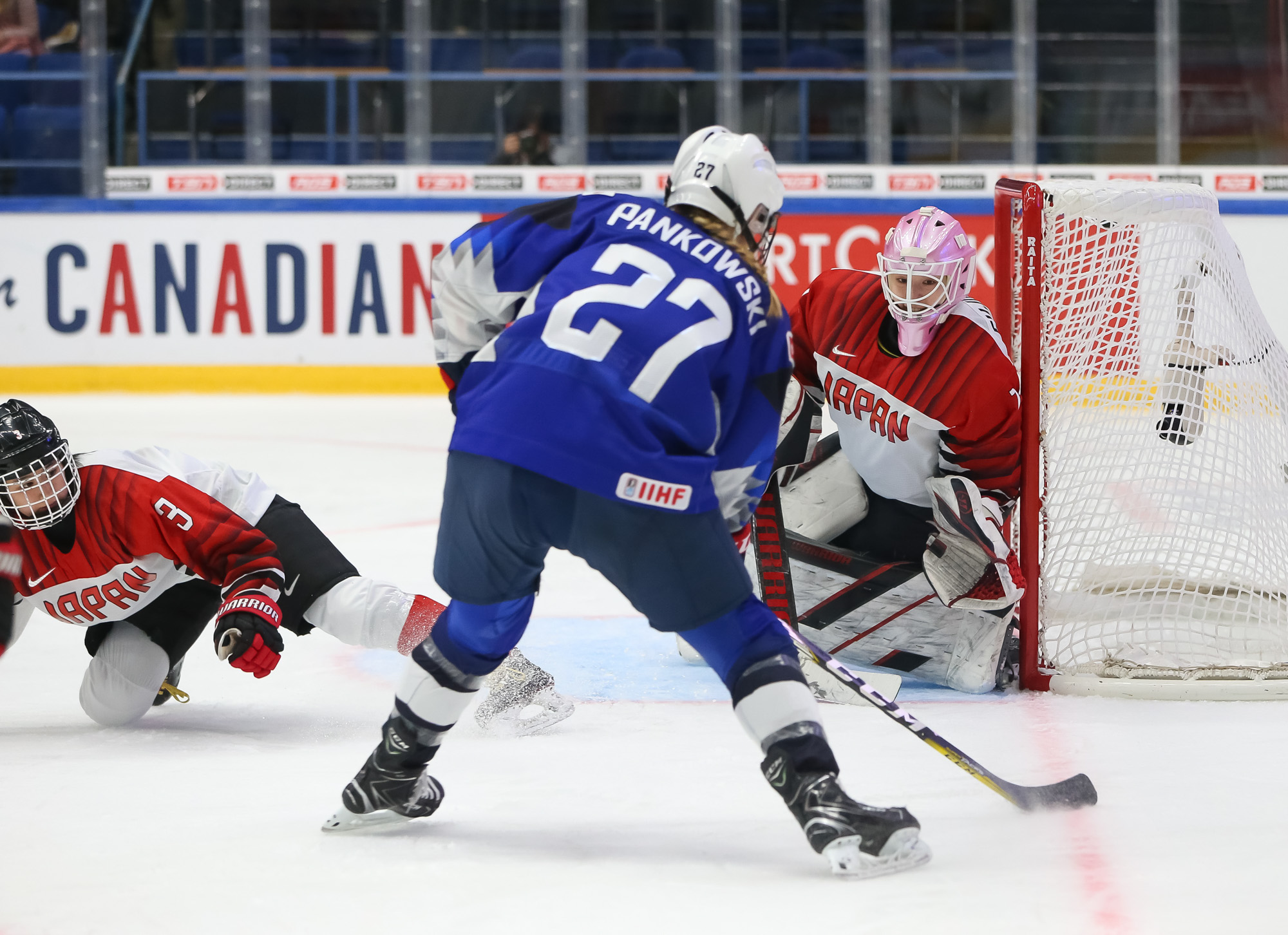 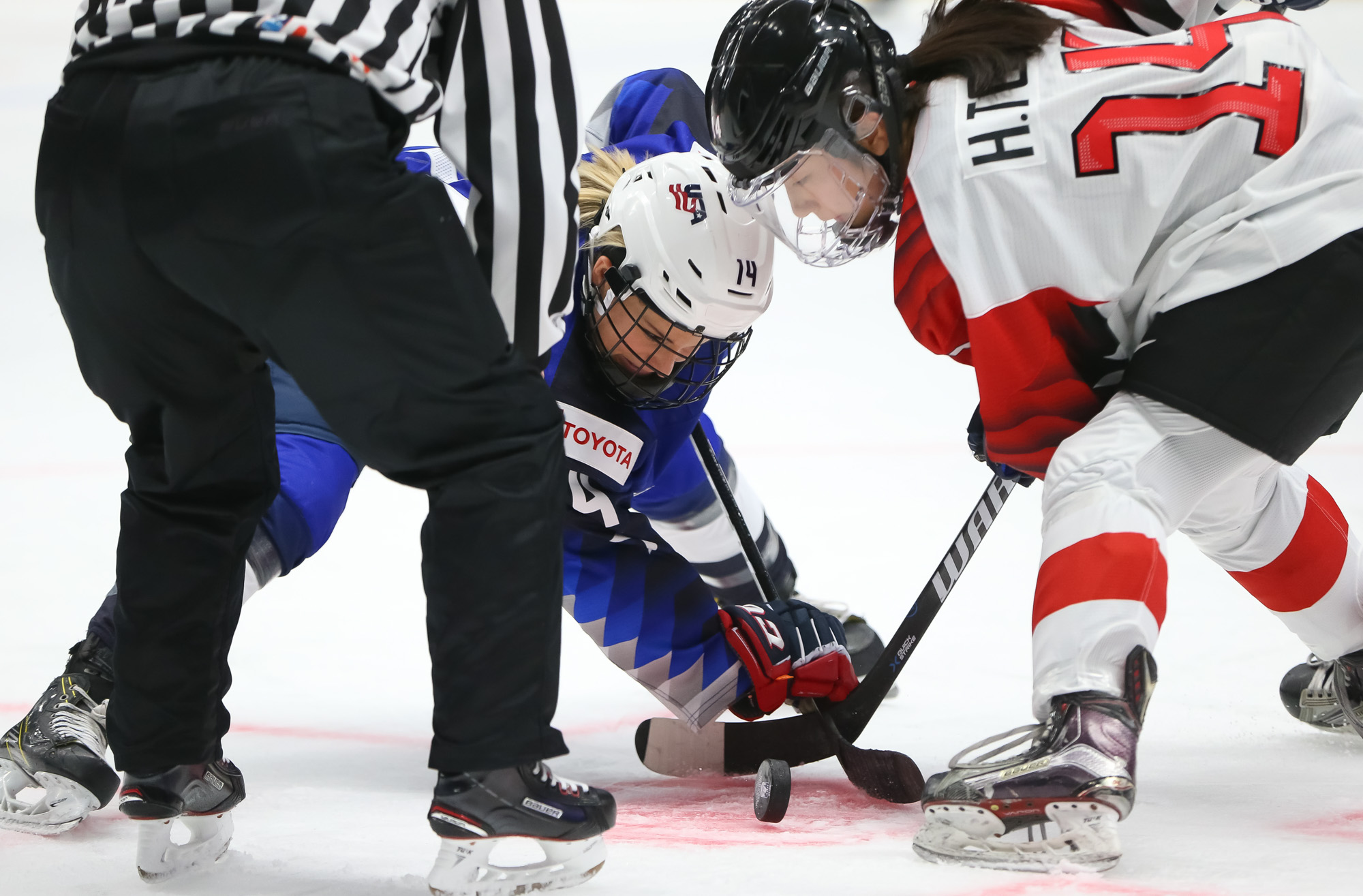 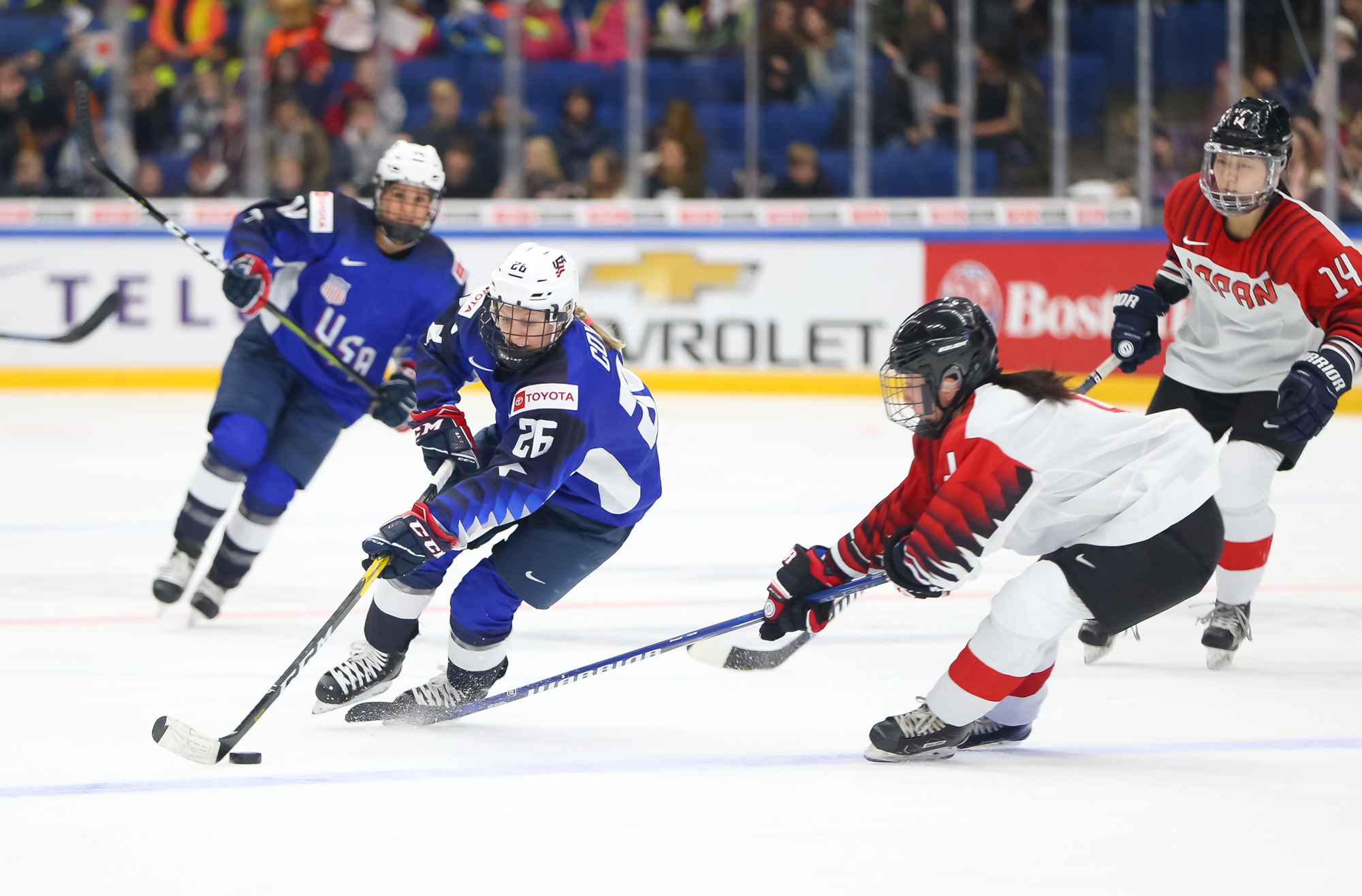 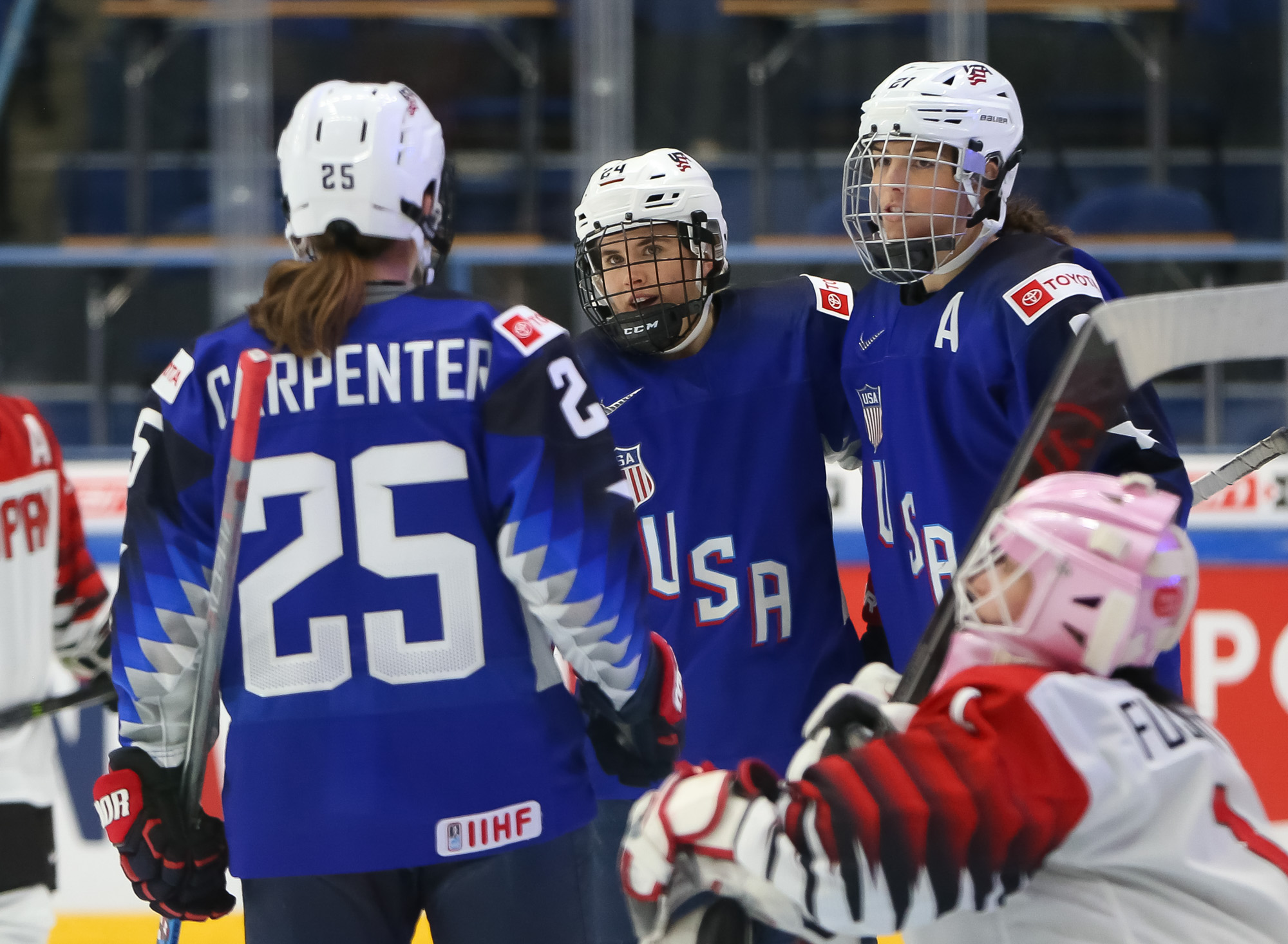 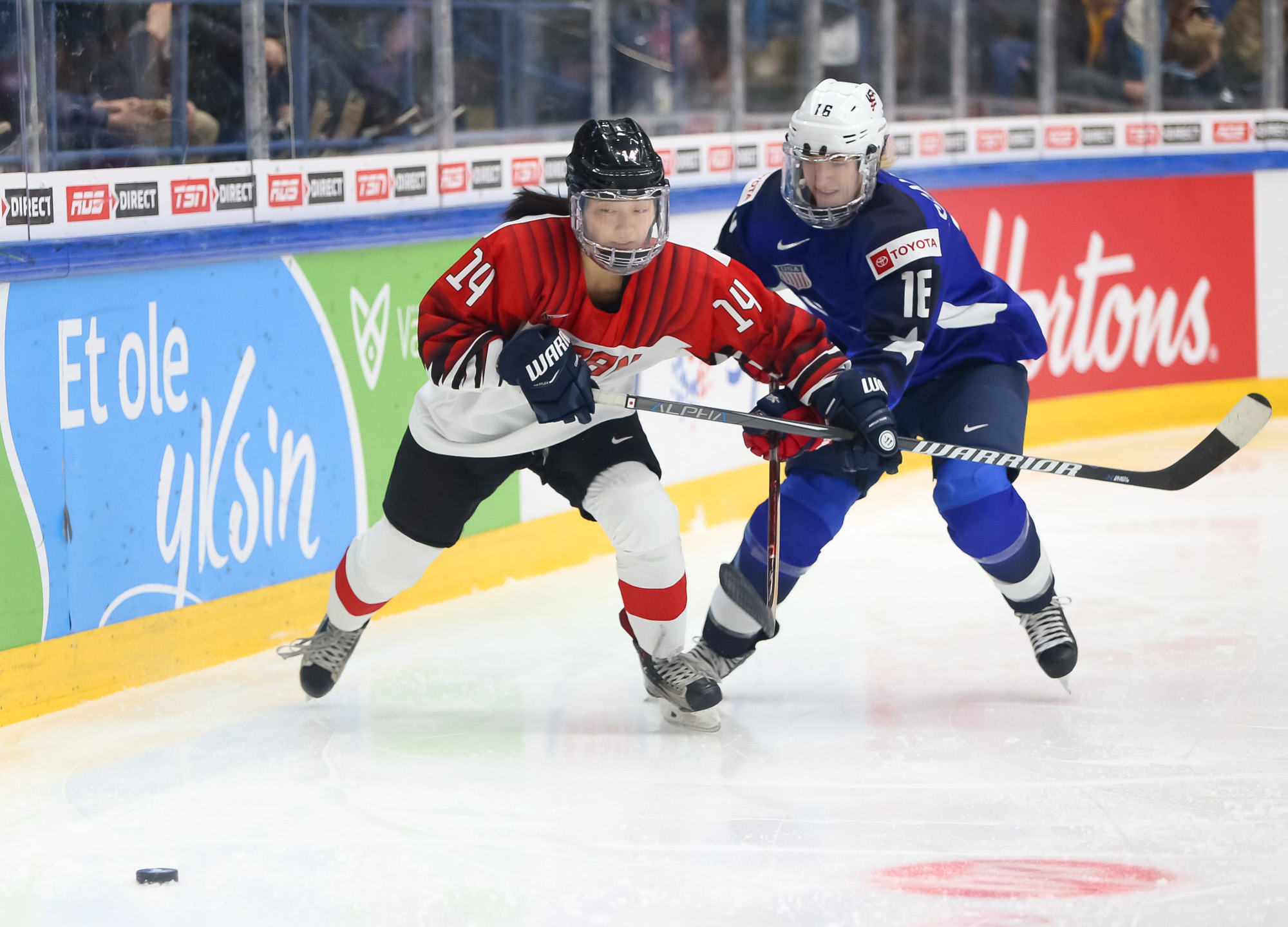 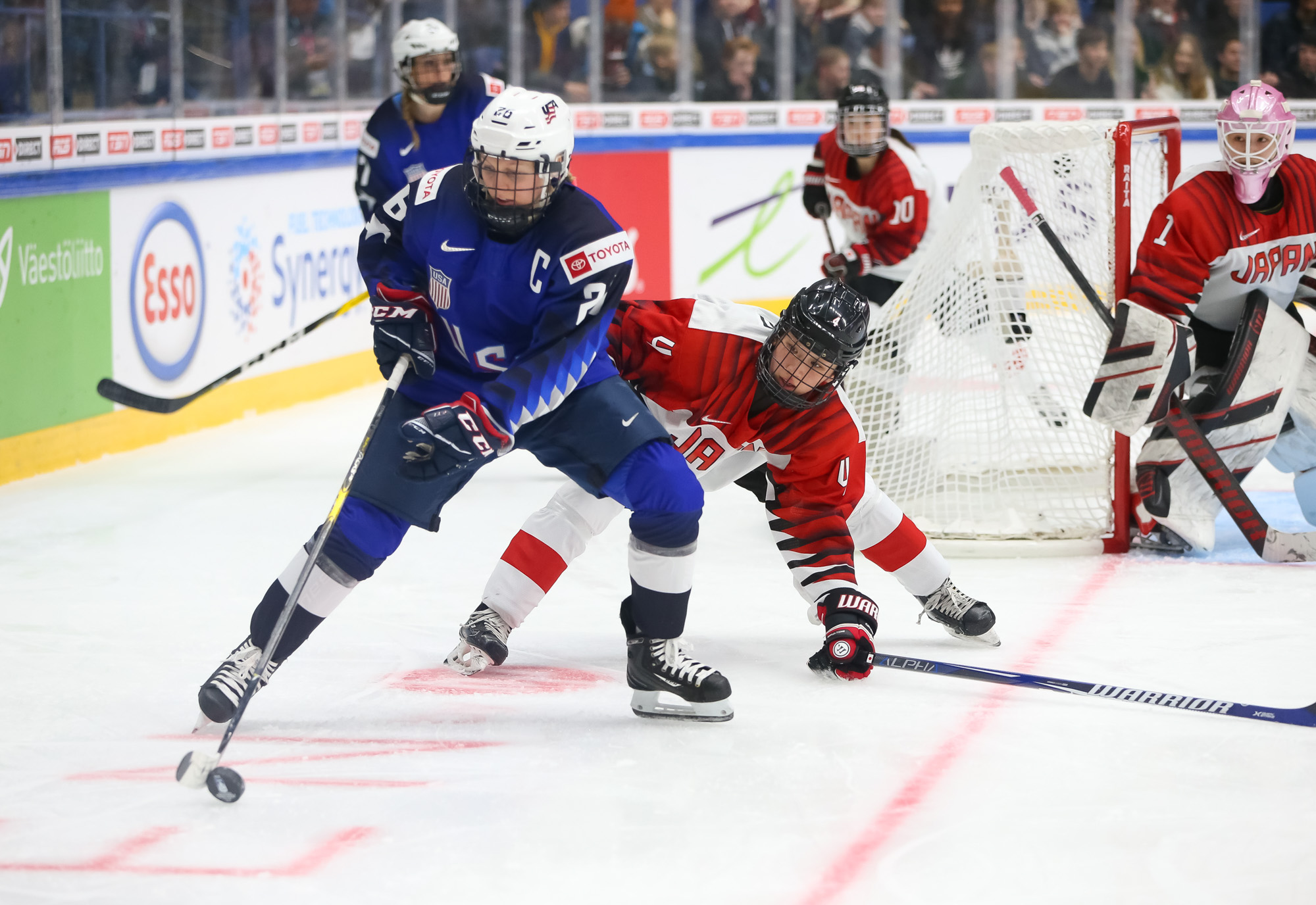 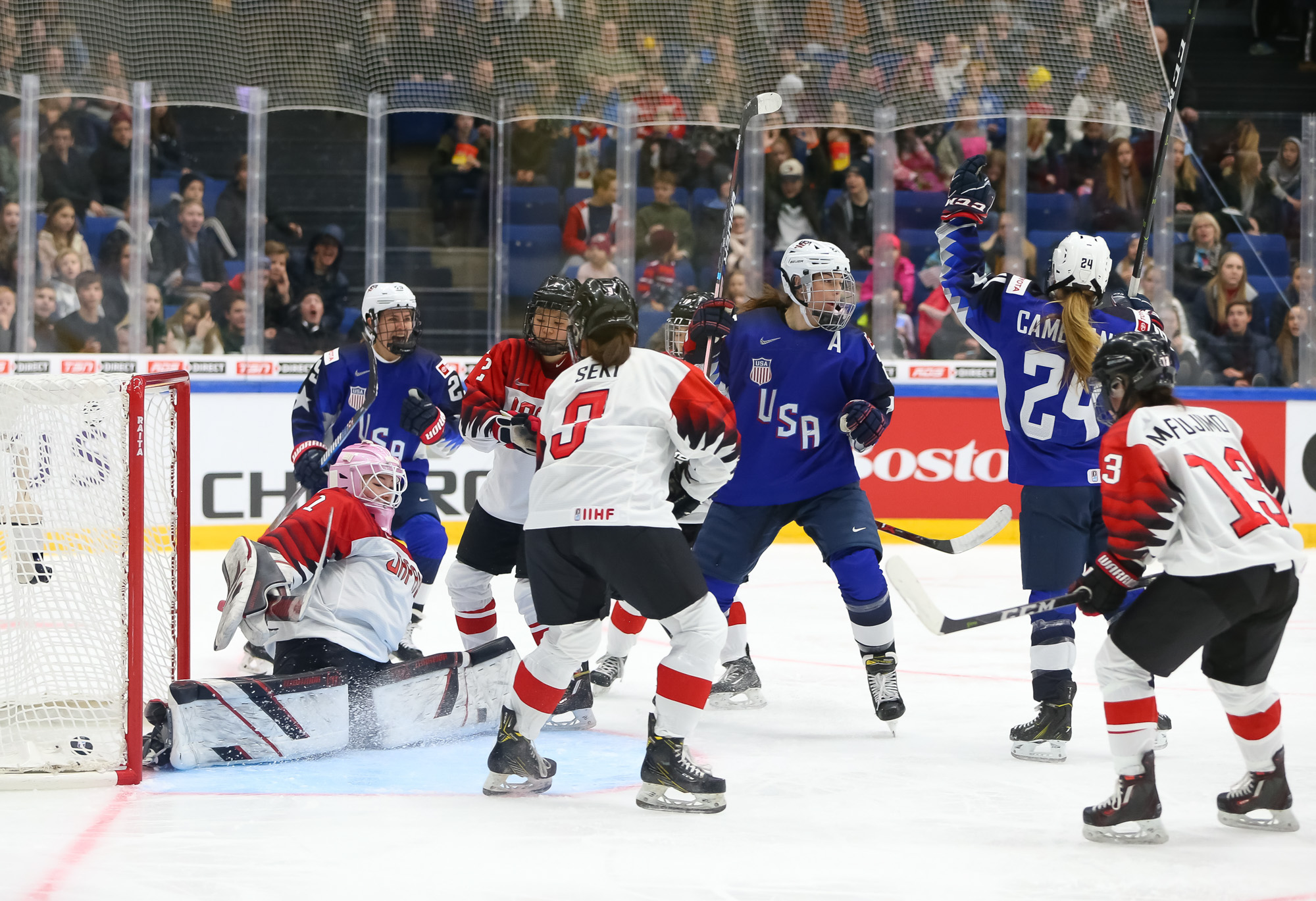 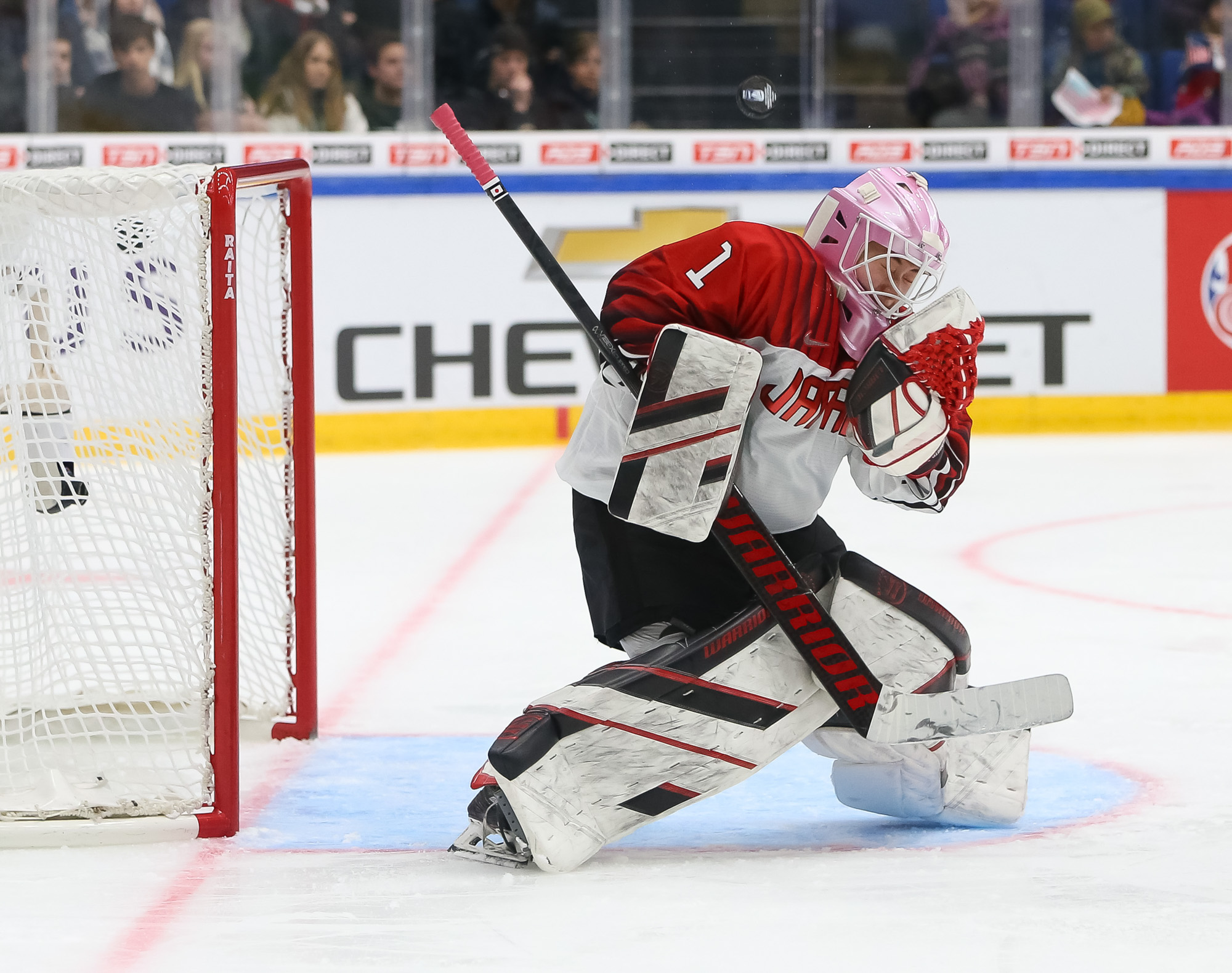 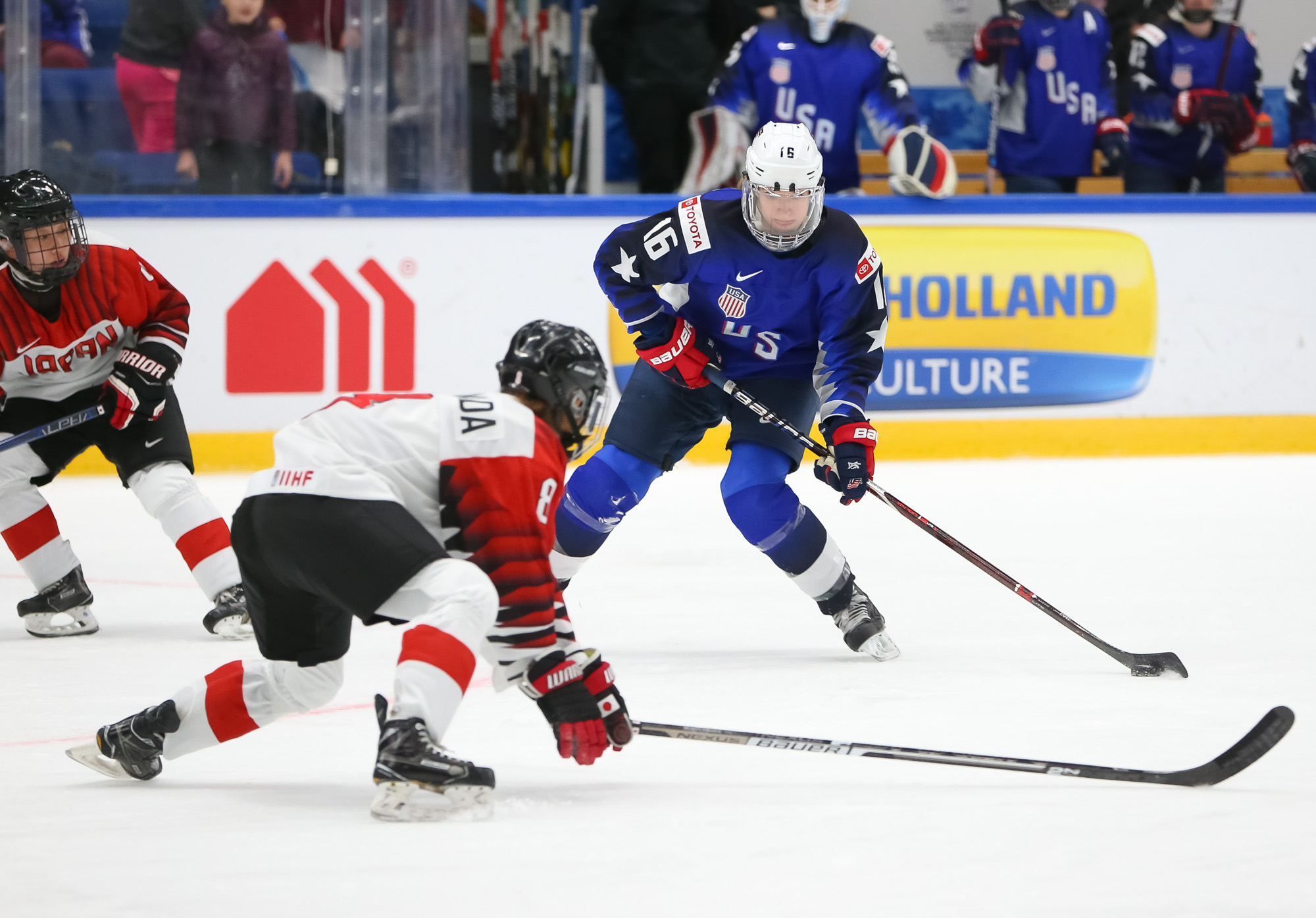 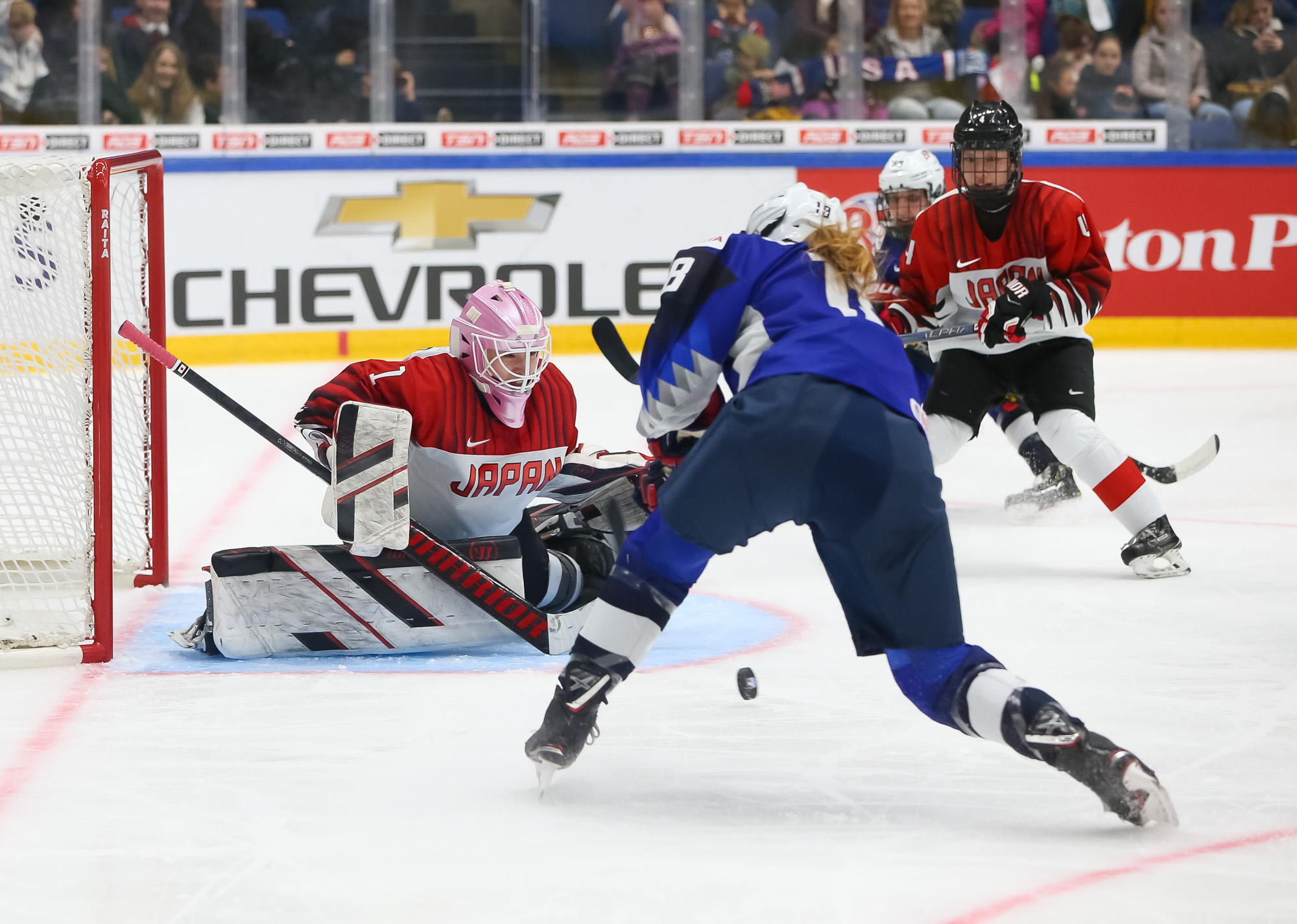 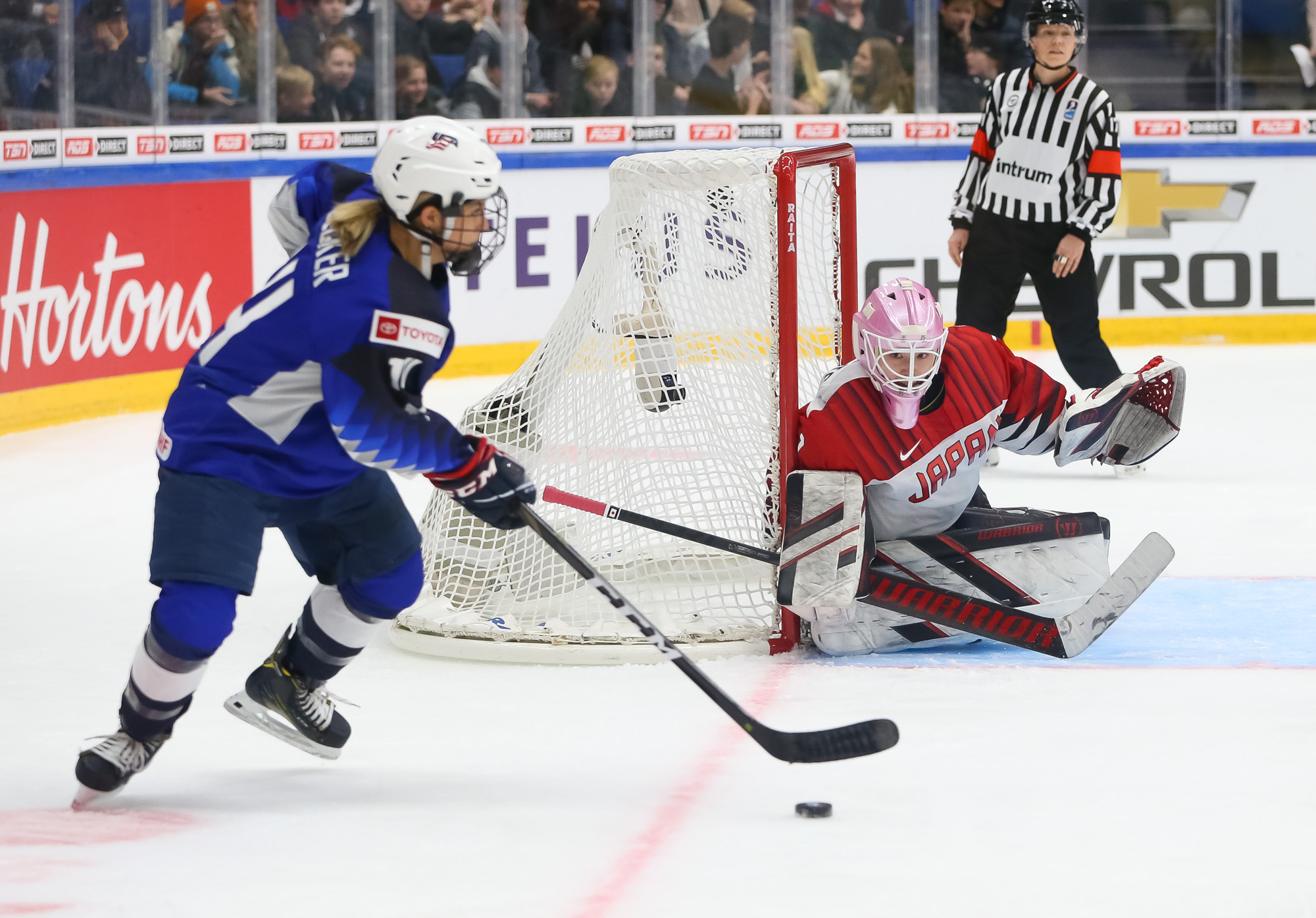 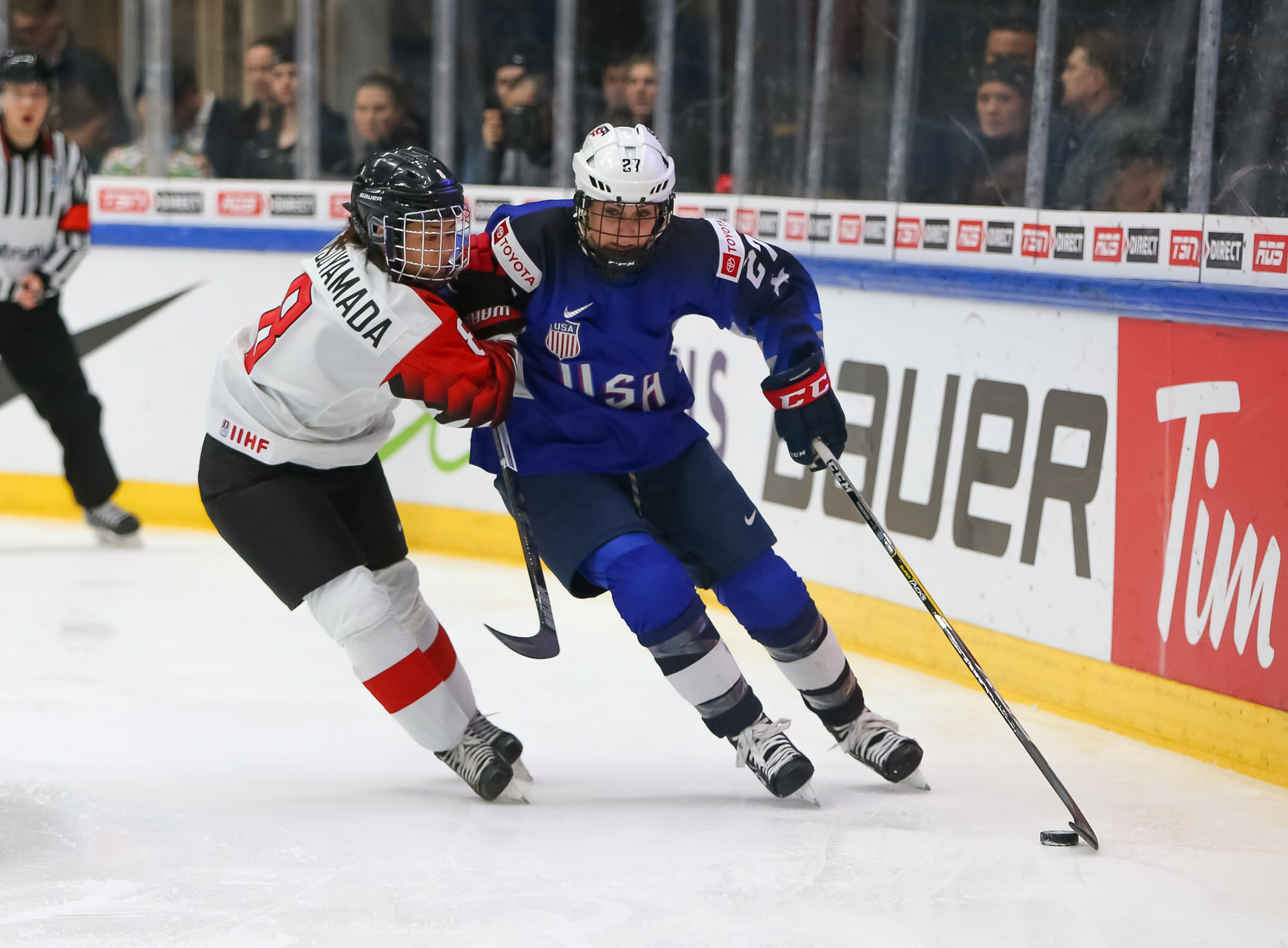 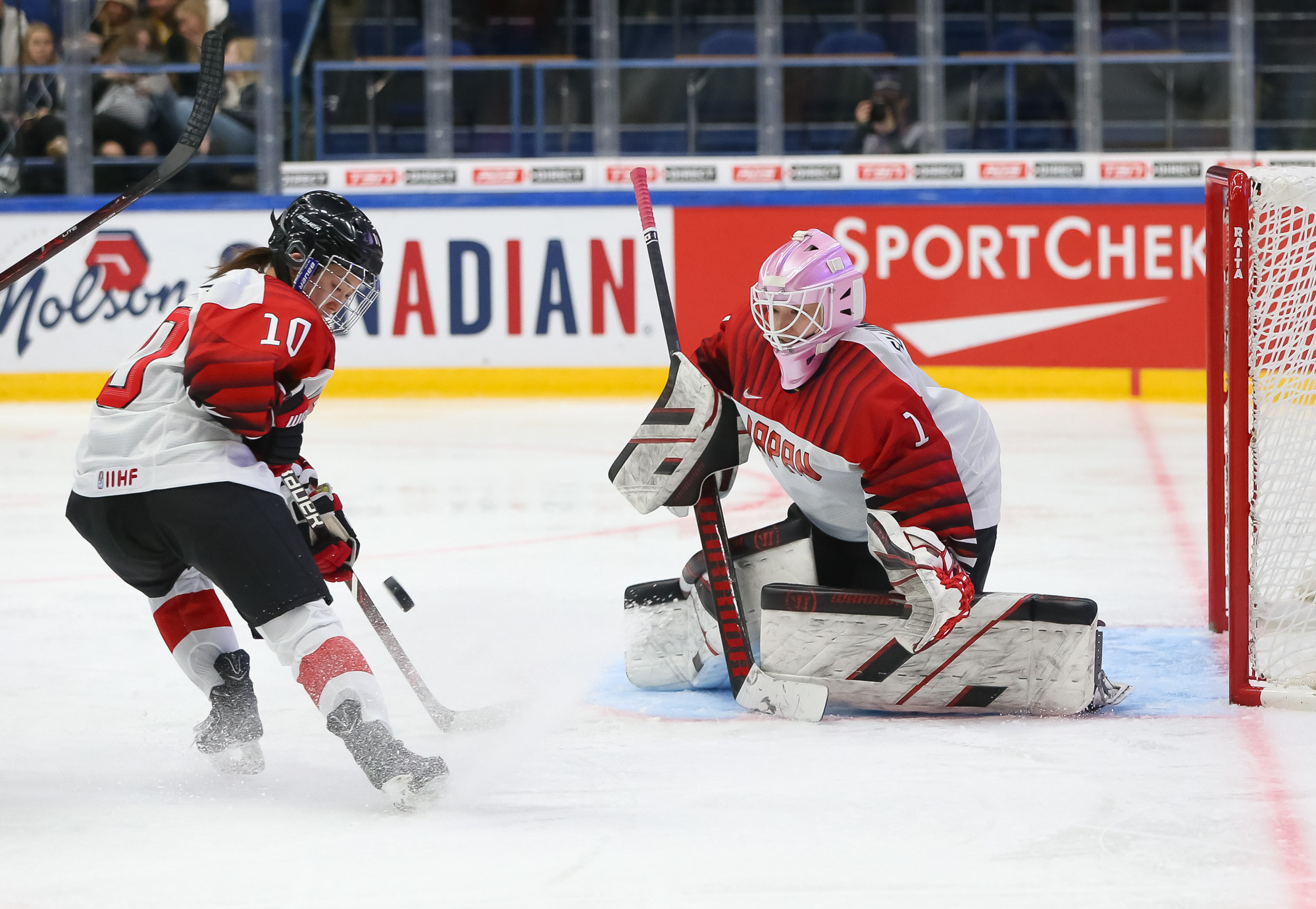 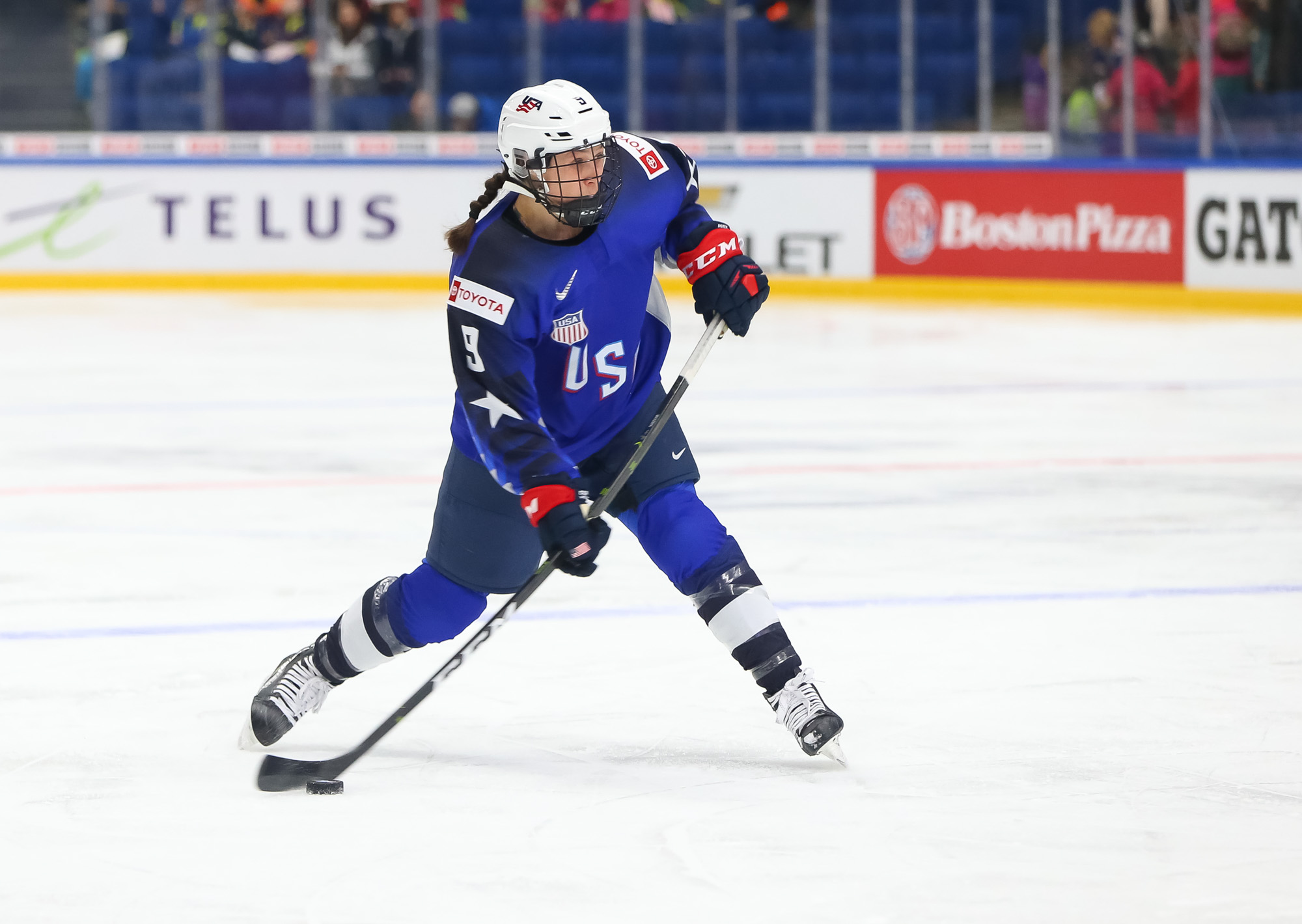 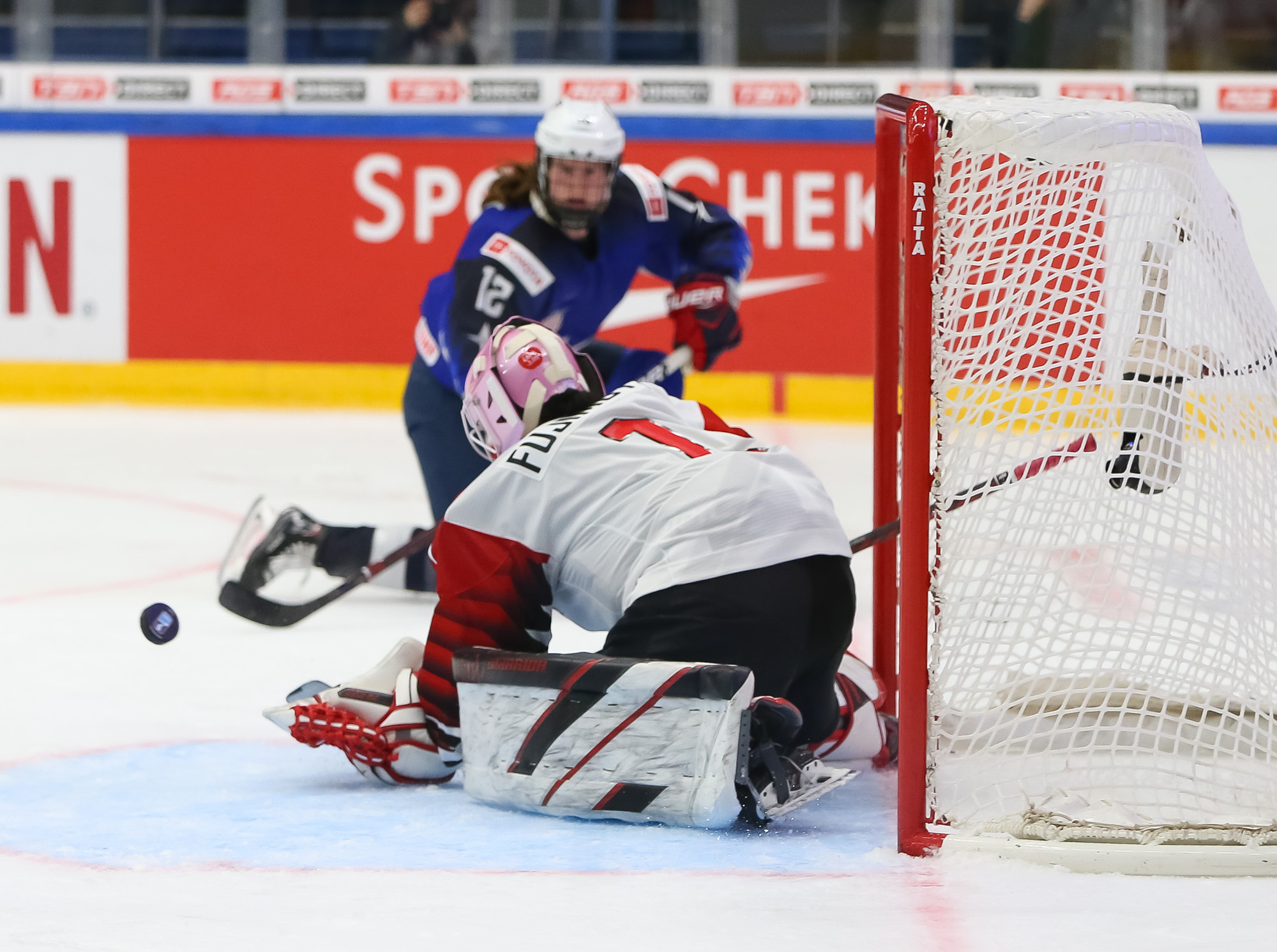 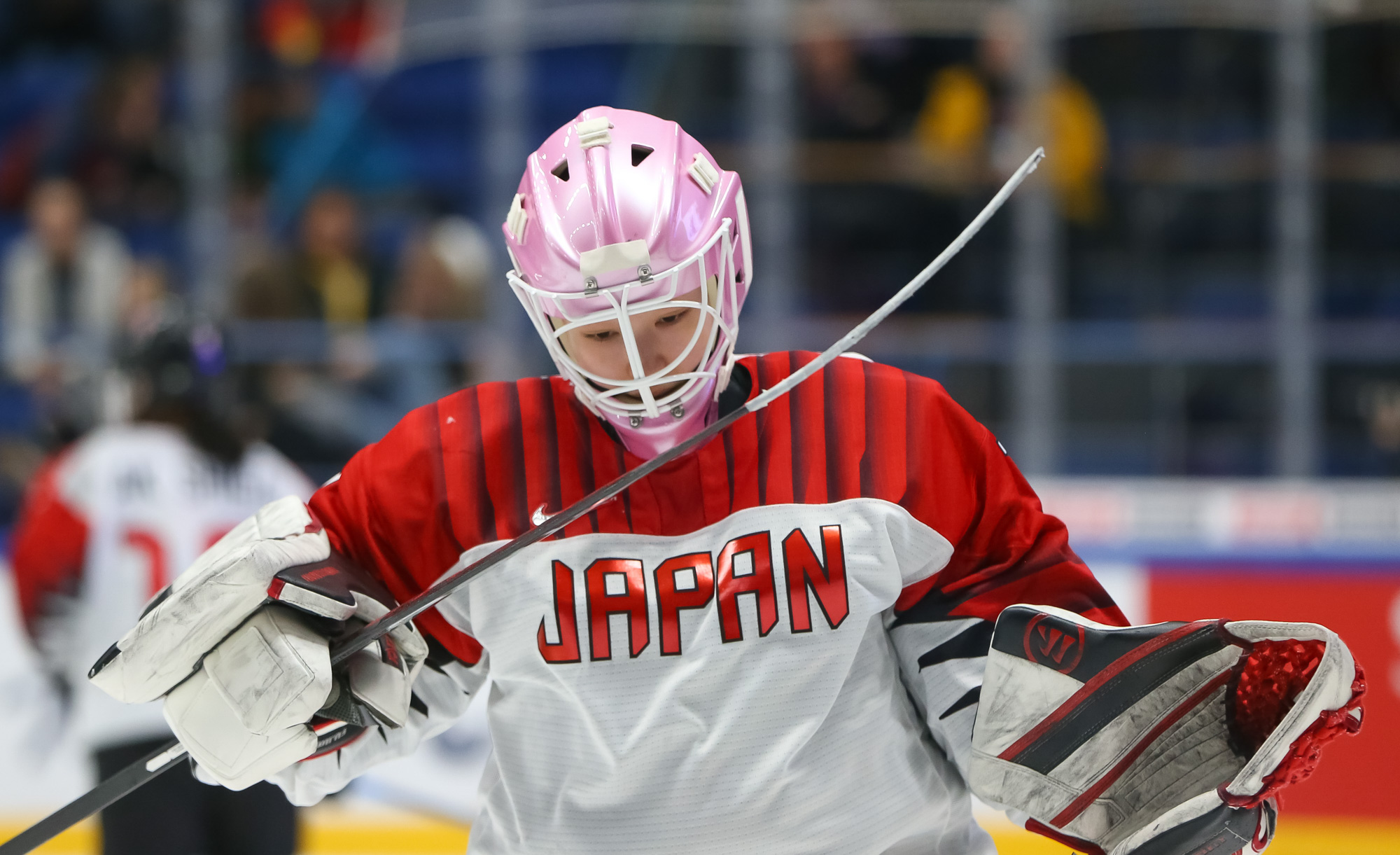 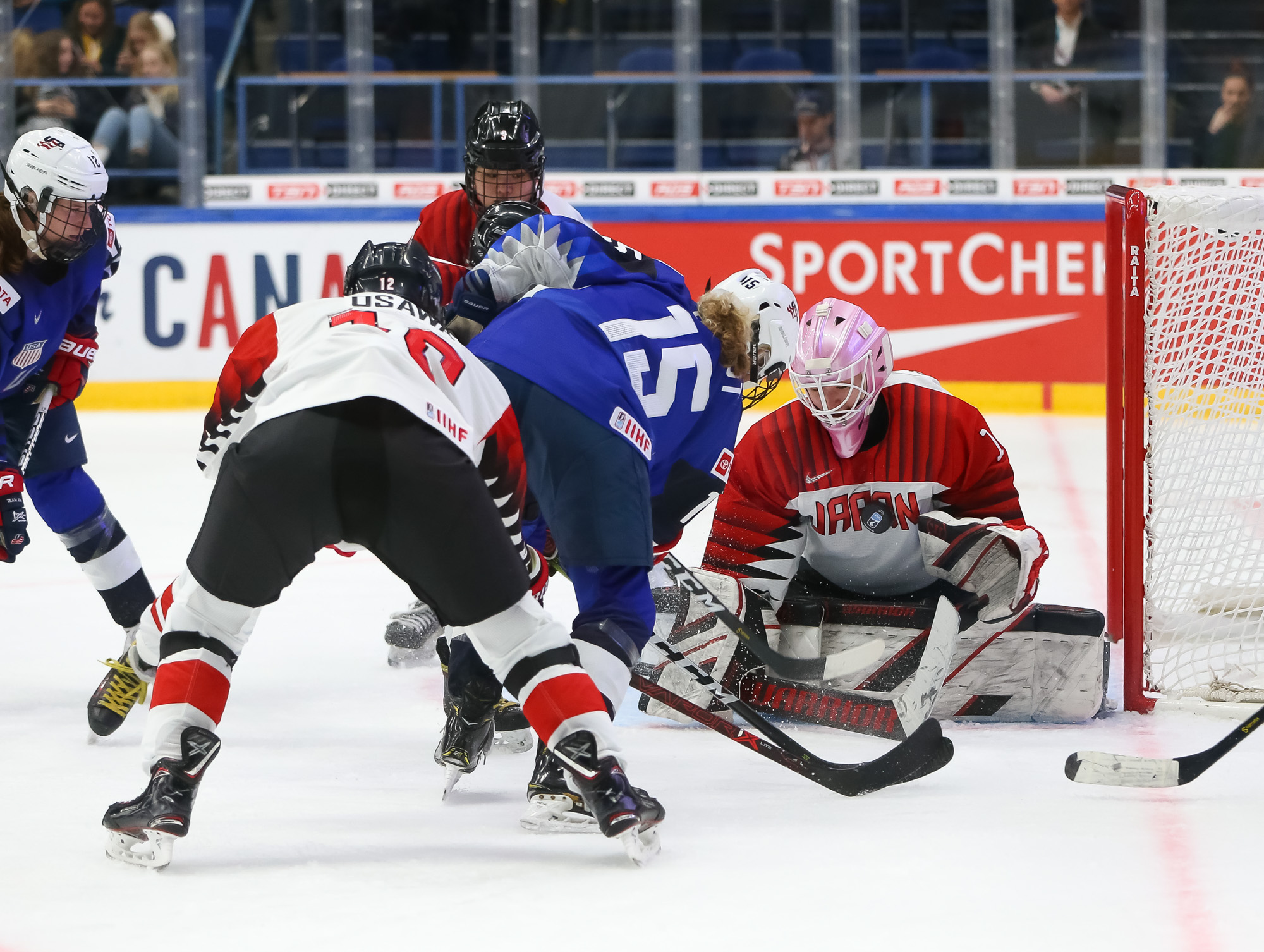 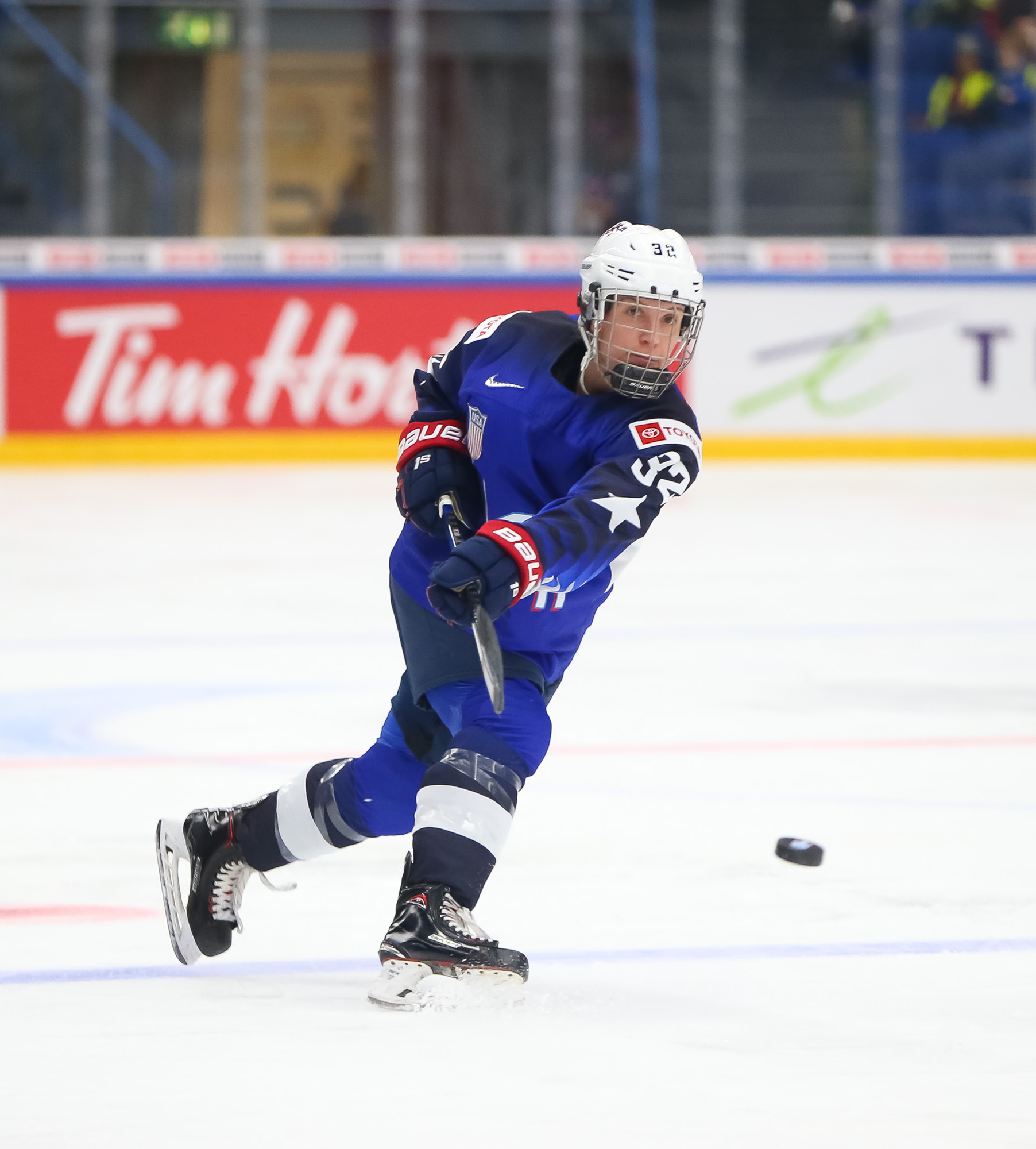 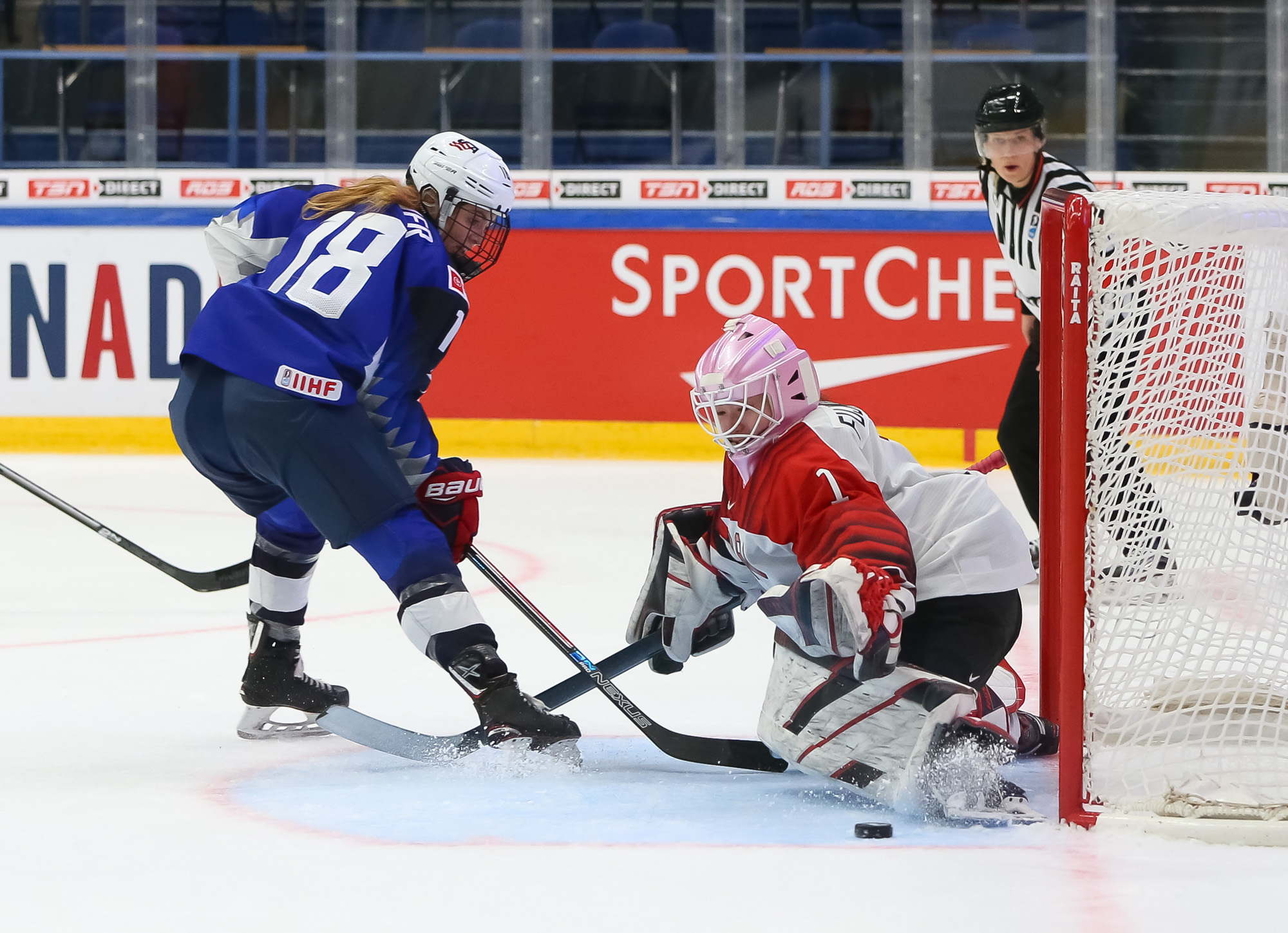 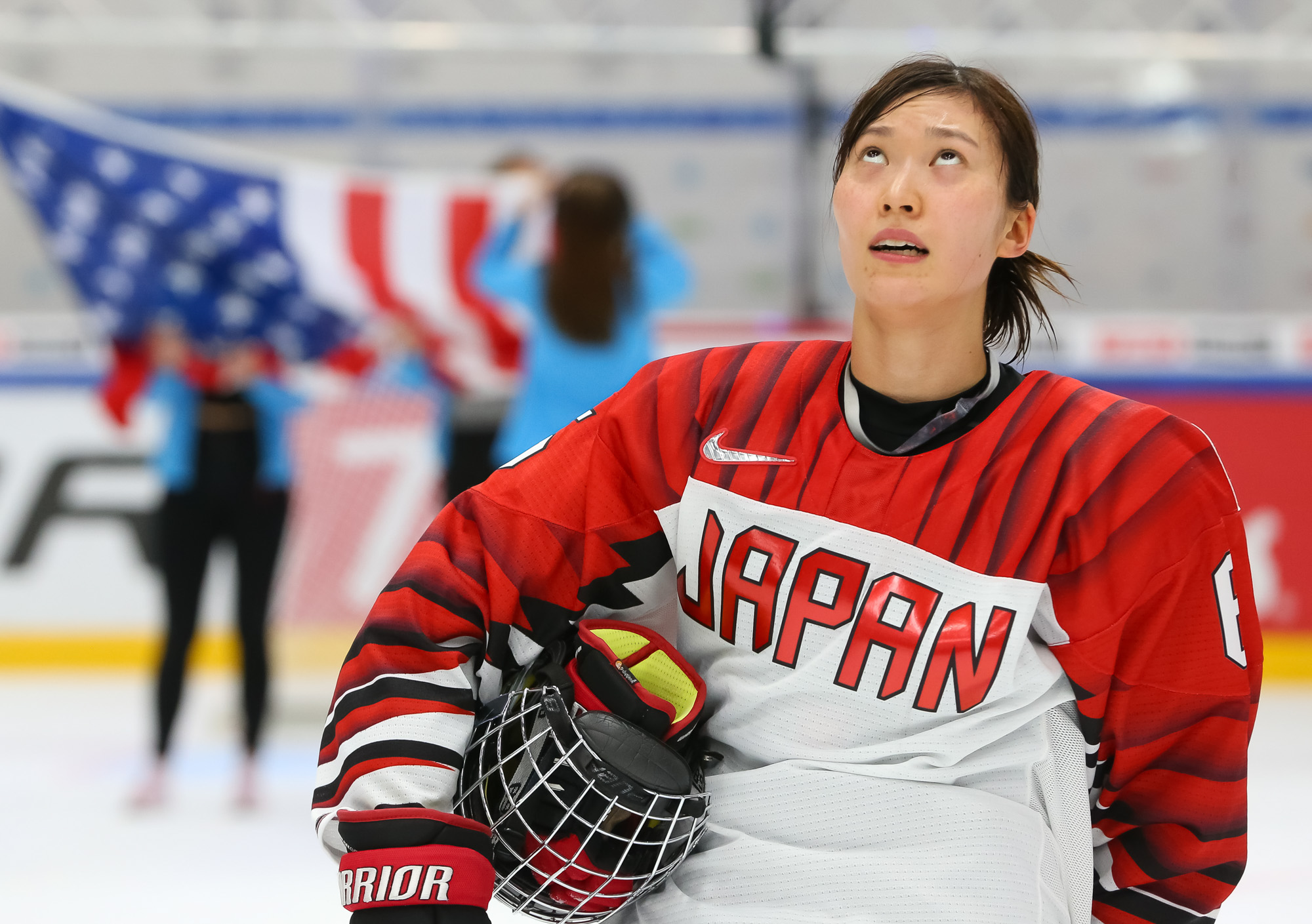 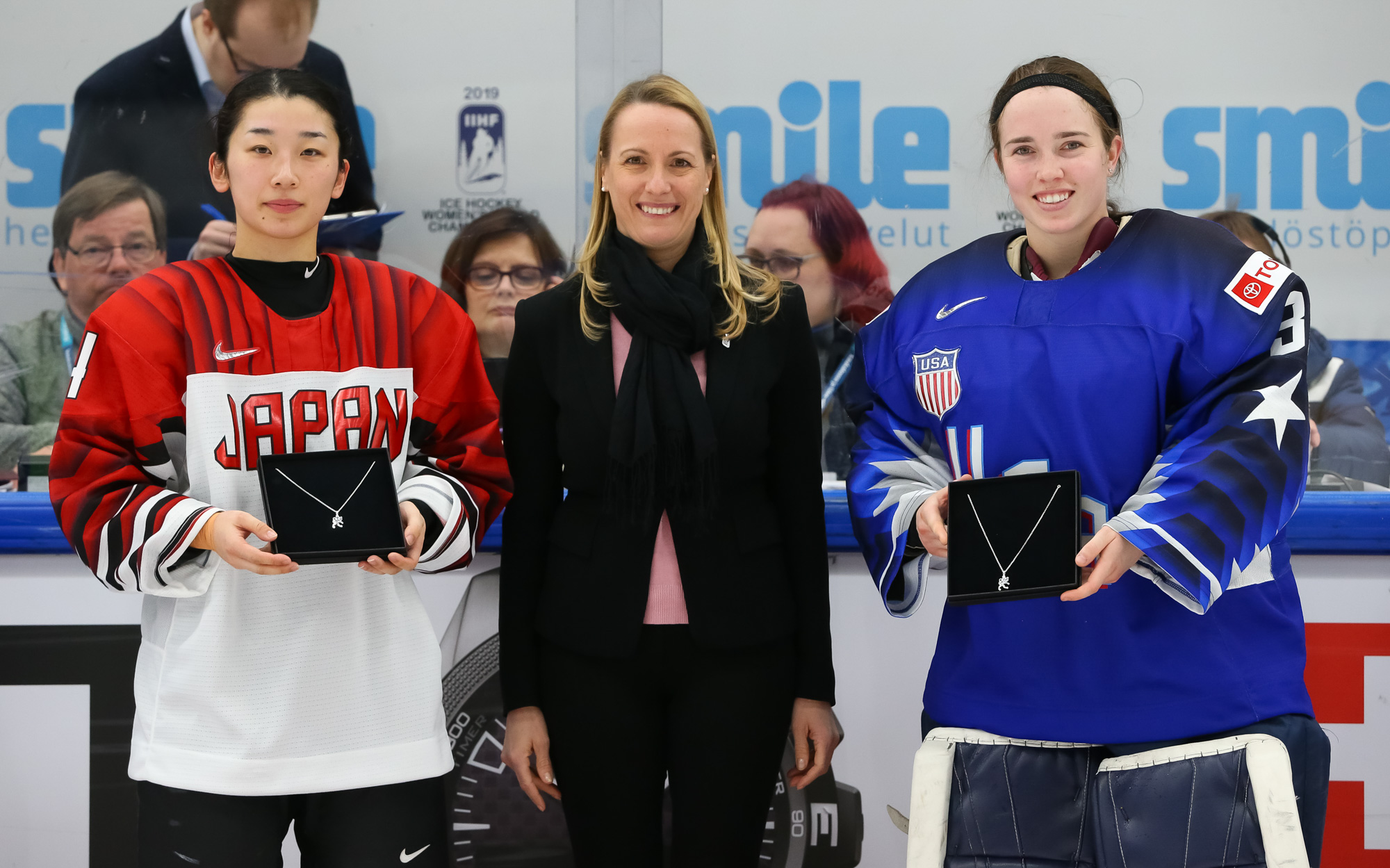 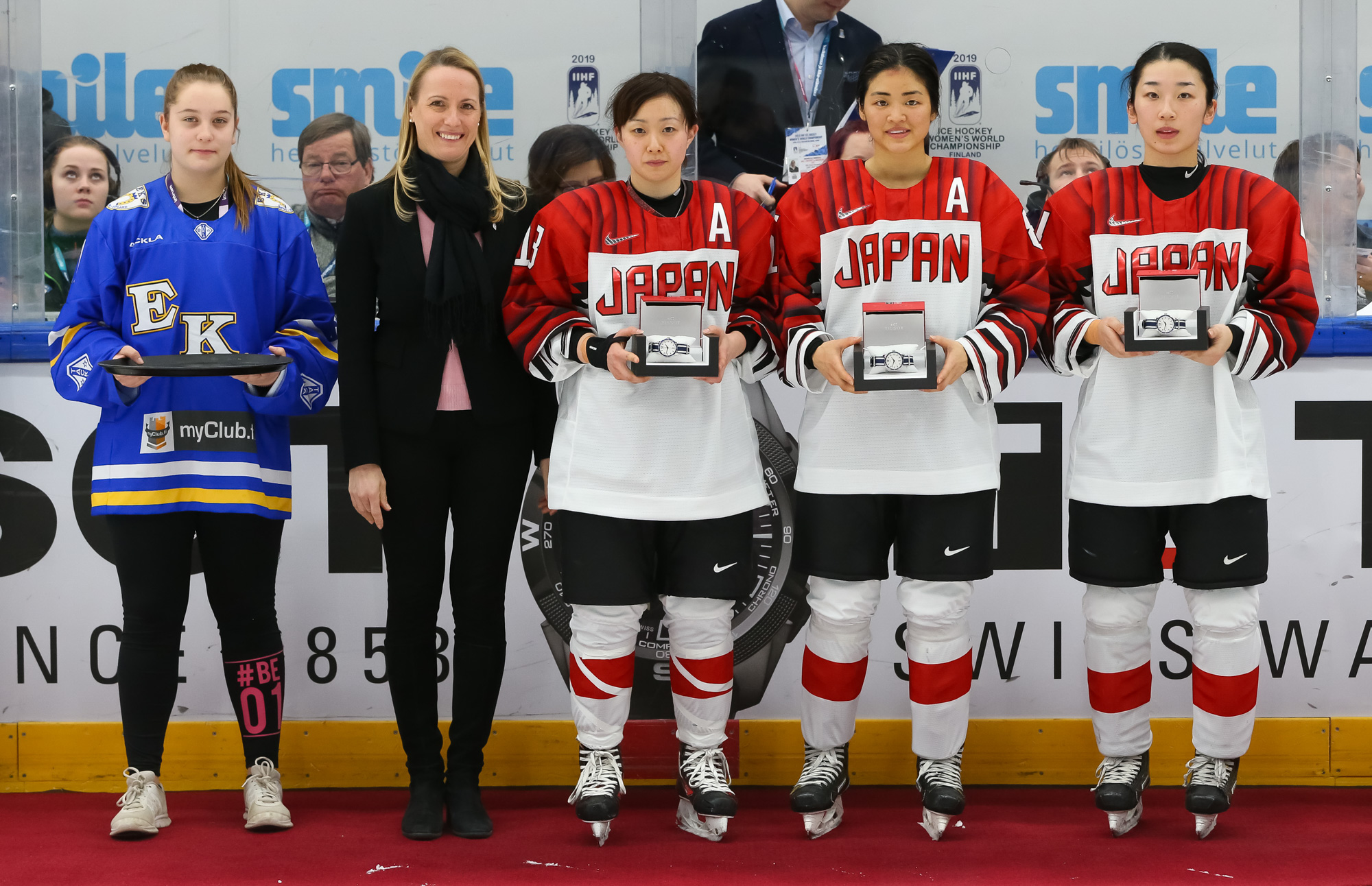 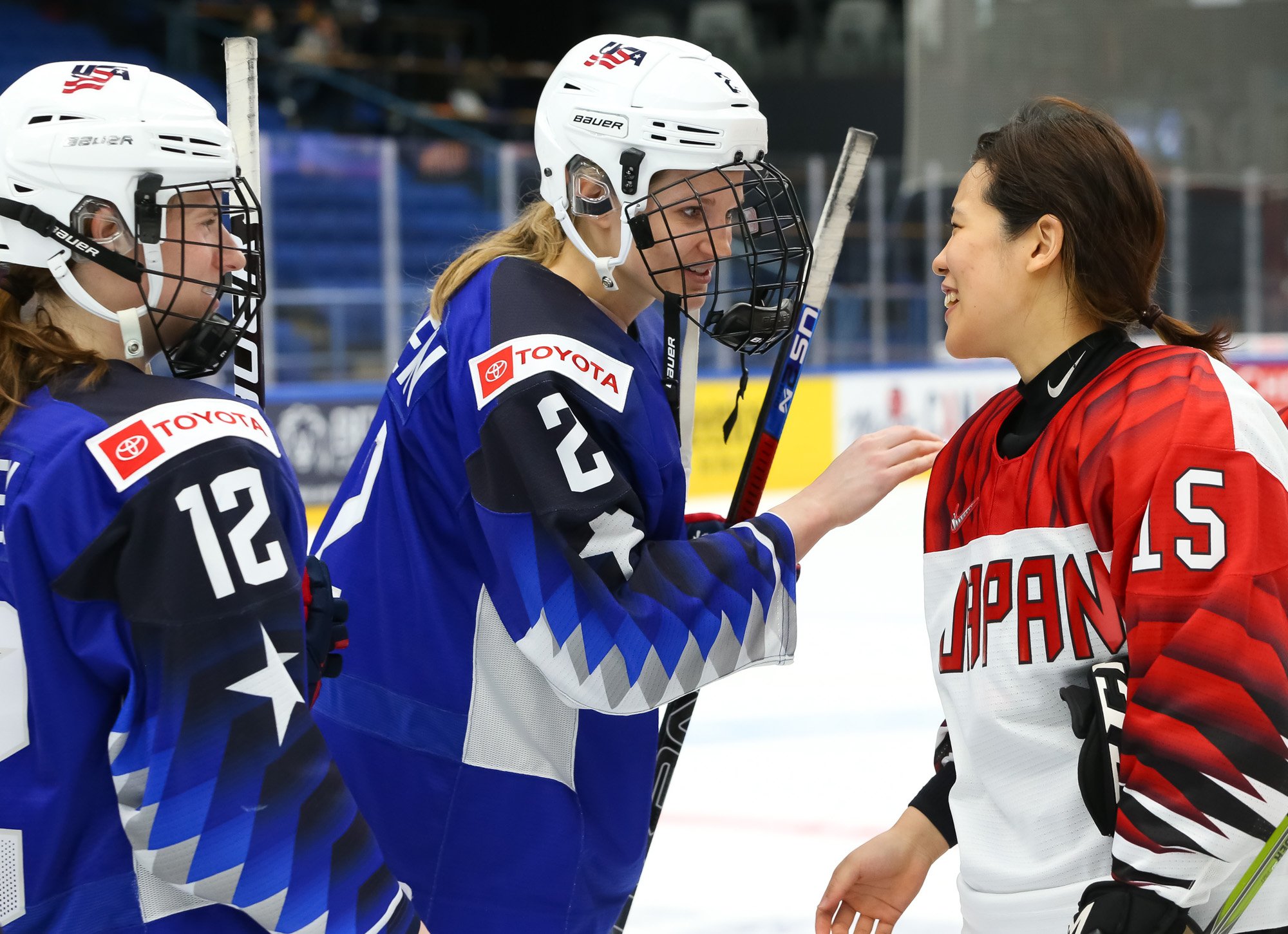 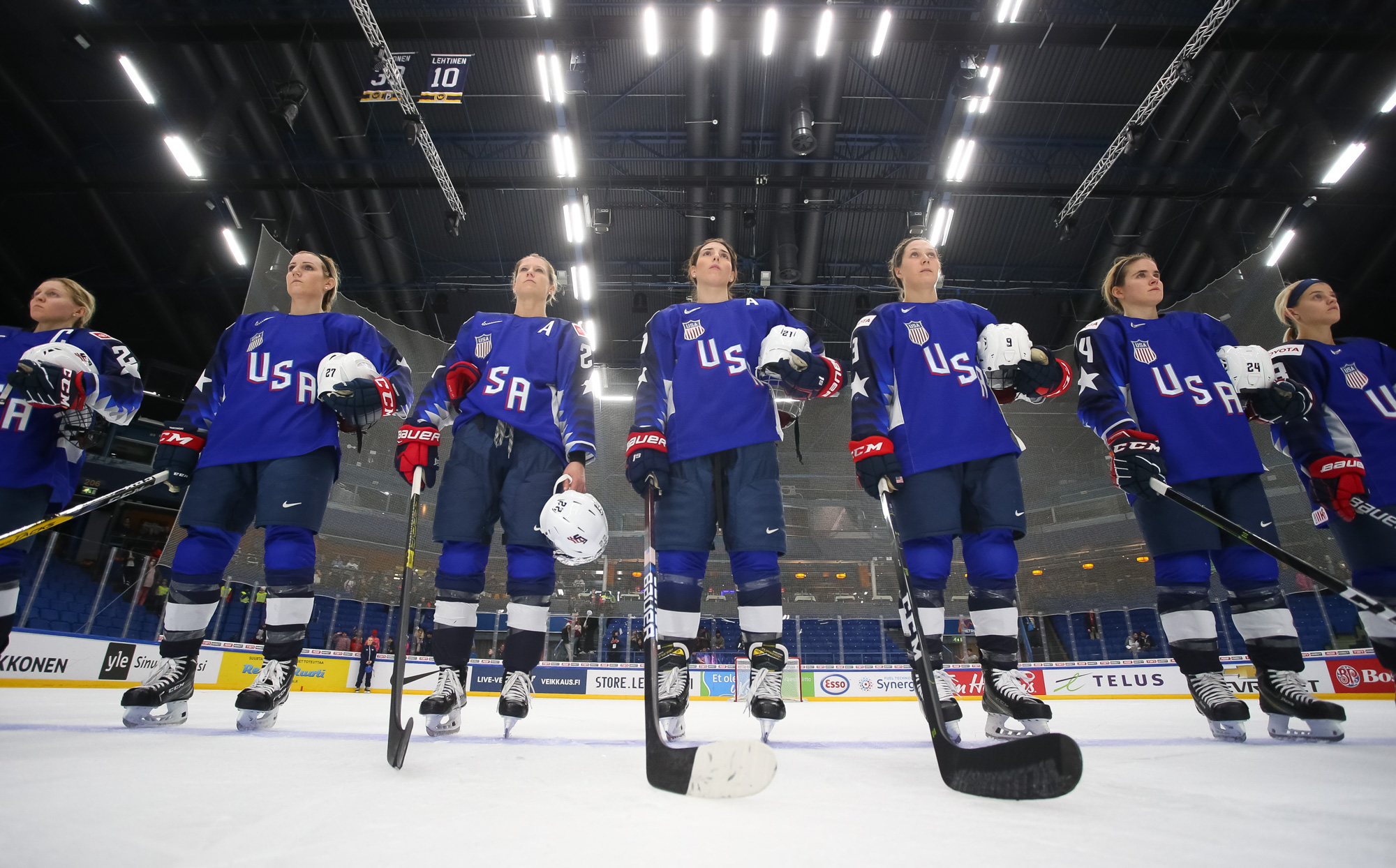 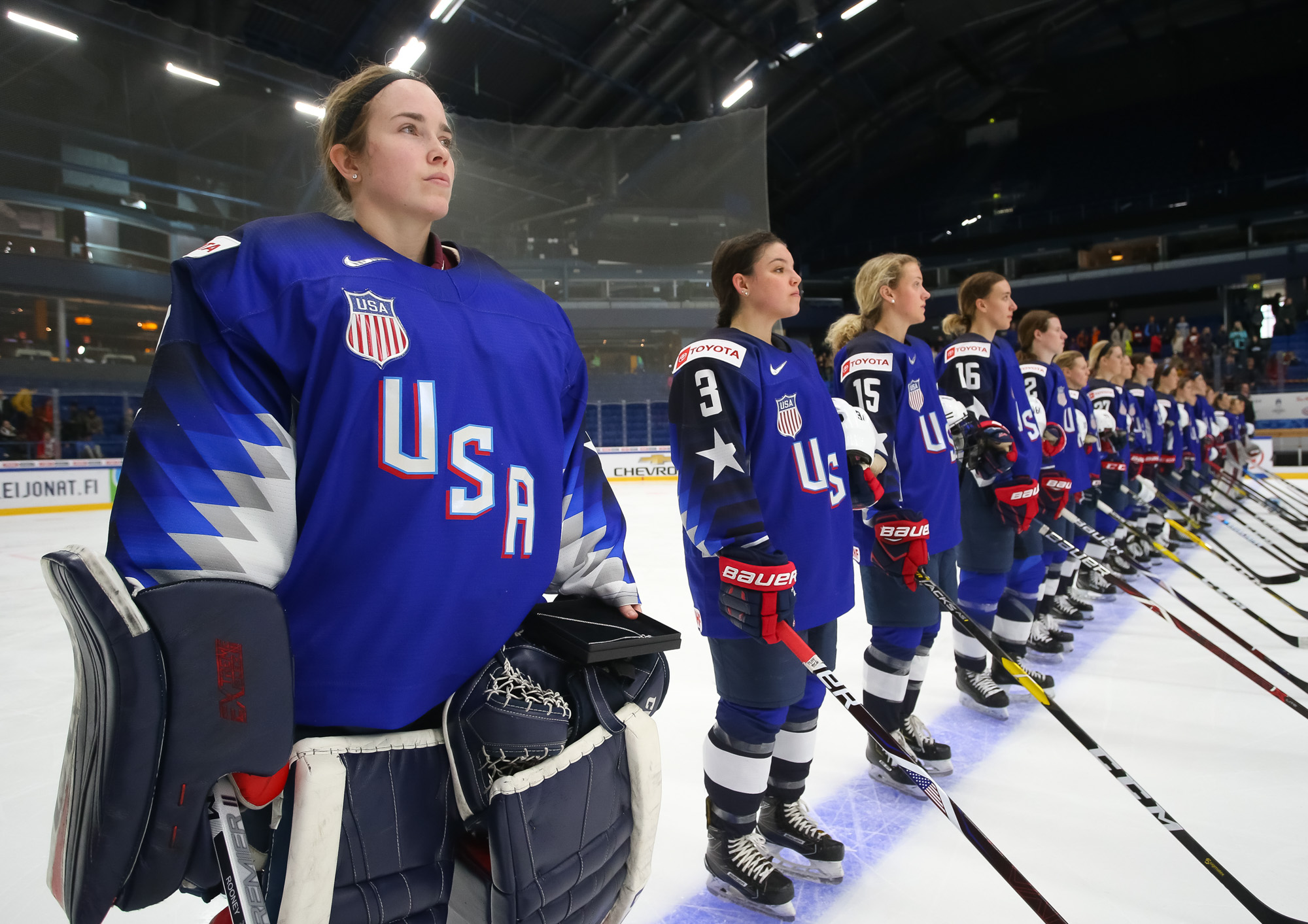