The tournament will take place downtown at the city’s legendary Hala Tivoli ice rink from 27 April to 3 May 2020.

“After 10 years the World Championship returns to this shrine of Slovenian ice hockey where the team achieved its first great success – a place in the world ice hockey elite,” said Matjaz Rakovec, President of the Ice Hockey Federation of Slovenia. “The amazing atmosphere created by the fans will definitely be the biggest charm of the championship. The nearby centre of the capital city will offer plenty of activities after each hockey spectacle while Slovenia’s tourist gems are exciting destinations on days off.”

Hala Tivoli was originally built in 1965. Its first big sporting event was the top-level 1966 IIHF Ice Hockey World Championship that took place in several cities of former Yugoslavia including the top-division championship that was won by the Soviet Union at Hala Tivoli. The venue also hosted World and European Championships in other sports such as basketball, figure skating and handball and has seen many international stars coming for concerts through more than 50 years.

Nine IIHF championships have been held at Hala Tivoli before and the home club and reigning Slovenian champion Olimpija Ljubljana has celebrated many titles there, while also using the venue as a centre for ice hockey development.

The arena was renovated in 2000 and will be modernized for the event. Beside the main hall the building has a smaller hall usually used for basketball that will be used for the competition as well for functions such as the warm-up and cool-down area.

Most recently Hala Tivoli hosted the event in 2010 when Slovenia beat Hungary 4-1 in the final game in front of a sell-out crowd of 4,000 fans to earn promotion to the top division.

The Slovenian team would be aiming to repeat history after having missed out on promotion back to the top level during the past two years. The competition for promotion will be hard with France, Austria, Korea, Hungary and Romania travelling to Ljubljana to battle for a spot at the top-level 2021 IIHF Ice Hockey World Championship. 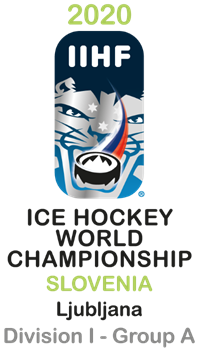 The Ice Hockey Federation of Slovenia unveiled its two logos for IIHF-sanctioned events of the season, the 2020 IIHF Ice Hockey World Championship Division I Group A in Ljubljana and the Olympic Qualification tournament two months earlier in Jesenice.

The common theme in both logos in the lynx. The animal has been the mascot and trademark of Slovenian ice hockey since the 2001/2002 season when Slovenia played in the top division for the first time as independent country. Back then the federation developed a new corporate identity and the lynx was chosen as an animal living in the Slovenian forests. It looks nice and friendly but can show its teeth and claws in critical moments.

The animal is endangered also in Slovenia. The regional wildlife project "Life Lynx" currently is underway in Slovenia and other countries in the region to repopulate the forests with the lynx from other parts of Europe in order to improve the gene pool. The ambassador is none other than Slovenian hockey star Anze Kopitar.

The swoosh behind the puck symbolize the colours of the Slovenian flag and the three stars on the lynx’s forehead come from Slovenia’s coat of arms. The six-pointed stars are the symbols of the Celje counts, the last great dynasty on Slovenian territory. The symbolized Mount Triglav on the puck is an element from the coat of arms as well.

While the teams and stakeholder have agreed on the venue at the 2019 IIHF Semi-Annual Congress, details on the schedule still have to be worked out during the upcoming weeks. Once the schedule has been defined and approved, more information about the start of ticket sale will become available.
Related articles
World Men
IIHF cancels Division I tournaments
Decision pending on 2020 IIHF Ice Hockey World Championship
17 MAR 2020
World Men
Ticket sale in Ljubljana begins
With 66 days to go until the first puck drop at the World Championship Division I Group A, ticket sale starts in Ljubljana
21 FEB 2020