Imbalance a relic of the past
Russia was a tough team to crack for the North Americans. Pictured Kristi Shashkina and Nicole Gosling battling for the puck.
photo: Steve Kingsman / HHOF-IIHF Images
share
The first two days of 2020 IIHF Ice Hockey U18 Women’s World Championship play in Bratislava have seen close, competitive games in both groups and the gap between the North American nations and the European challengers getting smaller and smaller.

Neither for defending champion Canada nor for the United States has any game been easy this year against Russia and Finland in the first two days. In particular the Russians impressed with two one-goal losses including an overtime loss against Canada.

It has not always been like that. During the IIHF’s 100-year anniversary in the 2007/2008 season, the IIHF launched the U18 women’s category. Calgary was the first host and home country Canada opened the tournament with an 11-2 win against the Czech Republic just after Team USA had blanked Russia 11-0 earlier that day – no comparison to the tight 1-0 win on Friday.

Canada’s Marie-Philip Poulin led the tournament in goals (8) and points (14). No player is likely to reach similar heights in the more competitive days of women’s senior and junior hockey.

Since 2015 the U18 Women’s Worlds are played in a two-tiered preliminary round with the top-four teams seeded in Group A and the best two automatically qualified for the semi-finals while the other two will be challenged in a playoff game against the best two teams from the “lower” Group B.

Only four European teams have been part of the “top-4” since in either the preliminary round or the playoffs. Russia played most games against the North American rivals since 2015, 17, followed by Sweden (9), the Czech Republic (6) and Finland (3). So to analyze the thesis of a decreasing imbalance, let’s focus on their fait against the North Americans since the start of the competition in 2008.

Indeed, the numbers confirm what many observes of the tournament feel: The lopsided scores are becoming a relic of the past – same as in the early years of international men’s ice hockey a long time ago. The numbers have gone down since the most lopsided scores in 2009 with an average of -11. And since 2016 the average goal difference between these four European teams against Canada and USA has gone down continuously from almost -6 in average in 2016 to just -2 this year.

The chart below shows how the four European teams did individually (coloured lines) and overall (thick black line) between 2008 and 2020. The changes have been drastically and each of the four countries has improved. 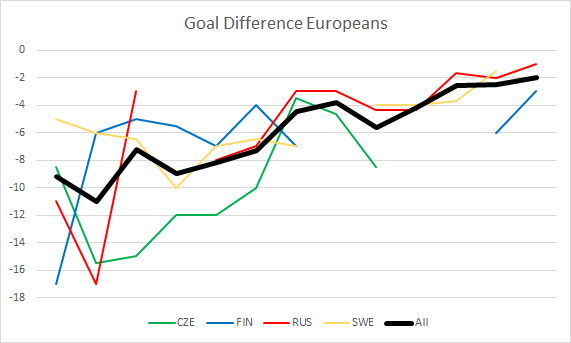 While Finland has been the leading women’s hockey country in Europe for many years, it’s Russia in the U18 Women’s Worlds who has been closest to the North American rivals recently (-1 this year and -2 or better the two years before) and historically (-4.2 in average) followed by Sweden (-1.5 last year), Finland (-3 this year) and the Czechs (-2 in 2018).

Russia also accounted for the only win of a European team against a North American country in WW18 history, two years ago on home ice in Dmitrov, 3-2 against Canada.

The same graph can also be made from the North American perspective: 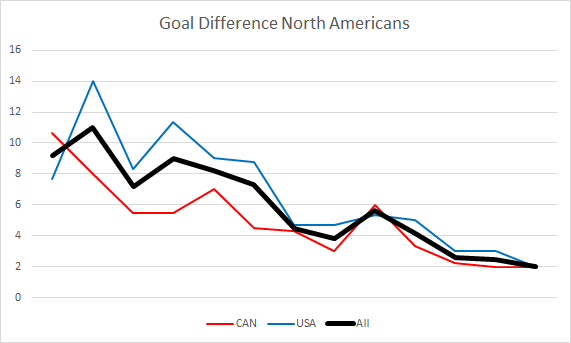 Here it’s the United States who have had the more lopsided wins against the top European nations in most of the years than the Canadians. For both countries the numbers have gone down from sky-high to +2 this year. The harder challenge for Canada and USA means more exciting top-level games for everybody.

It is the direction that leaders in hockey like to see. But what happened?

Since concerns about the imbalance were openly addressed at the 2010 Olympic Winter Games and Olympic women’s ice hockey put in question by the International Olympic Committee, the IIHF and its members have responded to the push in a positive way.

Women’s hockey has been better promoted for young girls and has in several countries left its niche as an “exotic” sport for women. Initiatives such as the annual World Girls’ Ice Hockey Weekend and Global Girls’ Game have helped grassroots hockey in countries on all continents and brought big and small hockey programs closer together. Players were part of the same movement of promoting women’s hockey and giving girls and women the chance to try it out, no matter whether they were in Canada, somewhere in Europe, in Australia, Indonesia, Mexico or South Africa.

Growing participation had an effect not only in the quality of the game at the top level but also the participation of smaller countries. The IIHF Ice Hockey Women’s World Championship program includes this season 40 countries – up from 33 in 2008. That means the vast majority of countries that have a men’s national team now have a big enough women’s hockey program to participate in IIHF women’s competitions as well.

Also initiatives directed to the best players seem to pay off such as the IIHF Women’s High-Performance Camp or more recently goaltender camps. These are here to help and motivate top U18 players, who usually have amateur status and may not always have resources for professional training in all countries, to become top athletes on and off the ice from top-level experts in different fields from different countries.

With the pool for under-18 players more limited than for the senior women’s national teams, different talent level has become even more obvious at the U18 Women’s Worlds in the past. To have such close scores again this year is a good sign for the future. It means that upsets like from Finland at last spring’s 2019 IIHF Ice Hockey Women’s World Championship could become more frequent. And that’s good news for the excitement of world-class women’s ice hockey.

Meanwhile the preliminary round will conclude with Canada and the United States battling for top spot in Group A while Russia and Finland battle for third place and an easier opponent on paper in the quarter-finals against the best Group B teams. In Group B everything is still open with the Czech Republic, Sweden, Switzerland and host Slovakia battling for the two quarter-final spots and against going to the relegation round.