The win earns the Swedes a semi-final date with Canada on Wednesday and a chance for retribution against the team that humbled them 12-1 just six days ago. The host Americans, however, are going home without a medal for the first time since 2003 and finish in 5th place.

It was just the fourth Swedish win over the U.S. in 19 U18 meetings.

"It was our best game so far, I think," said captain Liam Dower Nilsson. "The way we came together as a team and the support we gave to each other was amazing. We have to keep that energy and team spirit going to the semi-finals. It was a really bad game [against Canada], but we'd come together as a group and taken steps along the way. I'm looking forward to it. They're going to get a tough game."

"We managed to stop the American counter-attack, which was the key for us, and obviously scoring first was important," Sweden's coach Anders Eriksen added.

"They have a really good club, and I don't think for a minute anyone took them lightly," said U.S. coach Dan Muse. "We know the skills they have some special players. They have a good goaltender. The way the game started, with them scoring first, they took some momentum. Hats off to their team."
Although the Americans were the least penalized team heading into this game, they gave the Swedes three power plays in the opening period. The first one almost turned out well for them as the U.S. had the best two chances, but first Charlie Stramel and then Liam Gilmartin were stoned by Lindbom in goal.

And sure enough, later on during that same man advantage, the Swedes connected. Mattias Havelid did the damage, snapping an accurate shot through traffic over Kaidan Mbereko’s glove at 3:09.

The Americans thought they had tied the game two minutes later when Ethan Straky put a loose puck into the net, but video review showed that the net had been off its moorings for several seconds, so the goal was waved off.

Sweden almost went ahead later in the period when Isak Rosen missed two glorious chances. One came on a power play, when he hit the post. A short time later, he made a spectacular rush, beat Mbereko with a move, but couldn’t stuff the puck in the short side with the goalie down and out.

William Stromgren hit the crossbar early in the second as the Swedes continued to skate with confidence, but then they earned two penalties in a short period and were on the defensive. They killed of the first U.S. power play – but not the second.

Some good puck movement by the Americans saw Dylan Duke with a great chance in front. Lindbom made a fantastic save, but he kicked the rebound right to Sasha Pastujov, and the leading American scorer tied the game at 13:00.

But the Americans had little time to celebrate thanks to a highlight-reel play by Fabian Lysell. He tore down the right side, made an out-and-in move on U.S. defender Sean Behrens, and went around the goal. As he tried to stuff the puck in, it went off Roman Schidt and over the goal line just 43 seconds after the U.S. had made it 1-1.

Soon after, Mbereko suffered what looked like a left-leg injury after incidental contact with Oliver Moberg. He had to be helped off the ice and Gibson Homer came in to finish the game.

Lysell made it 3-1 early in the third on a giveaway off Aidan Hreschuk in centre ice. Lysell bolted down the right side and snapped a high shot over the shoulder of Homer, giving the Swedes a bit of breathing room.

Oliver Moberg put the game out of reach at 14:25, jamming home a rebound in front of Homer on a power play.

Red Savage got one goal back with the net empty and 1:56 remaining but Rosen ended the scoring with a goal with under three seconds left to make it a 5-2 final.

And so Sweden advances to the semi-finals against Canada, looking for a little revenge, looking to prove that the first meeting between the teams was an aberration. "We didn't play any international games to get ready," Eriksen explained of his team's improvement over the last week. "Our last games were in February last year, in Russia, so many of our players are playing in their first international tournament now. They have grown in six games, but in that Canada game there were a lot of things that went wrong for us. Tonight was a real team effort. We respect Canada, but we want to have our best game of the tournament in our next game. This is probably the best team Canada has ever had at the under-18 tournaments because the OHL didn't play this year, so they have all of their best players."
Sweden vs United States (QF) - 2021 IIHF Ice Hockey U18 World Championship 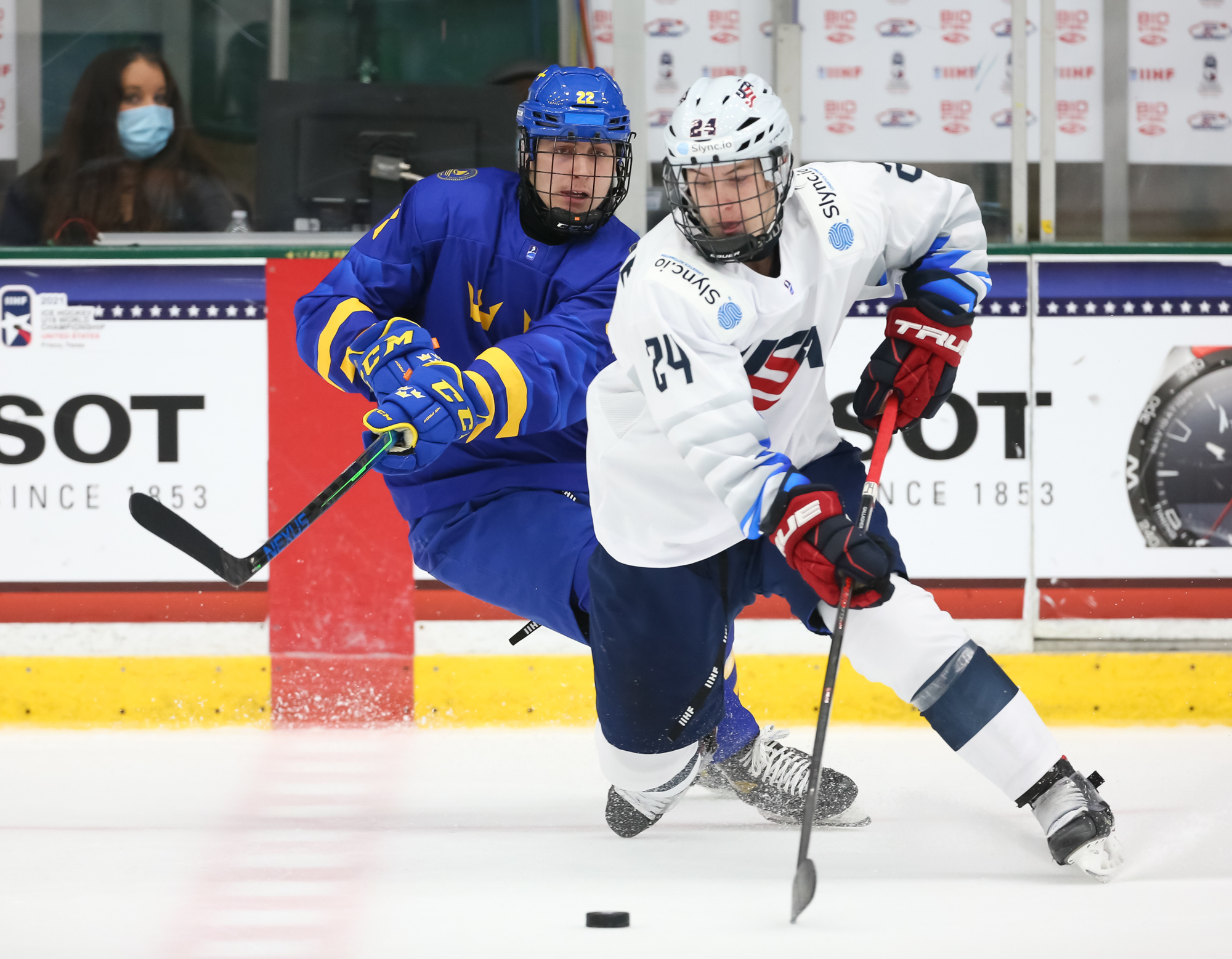