Opportunity seized
Regardless of Sunday's outcome against Czechia, Slovakia will earn its highest placement in women's hockey at the senior or U18 level.
photo: Micheline Veluvolu / HHOF-IIHF Images
share
Barbora Kapicakova looked up at the scoreboard late in the third period of an eventual win over Germany, turned to her teammates on the bench and asked, "Do we have enough?"

Aiming to advance to the quarterfinals at the U18 Women’s World Championship for the first time in the nation's history, Slovakia still led, 5-2, after surrendering a German goal with 7:32 to play.

But the Slovaks needed to win by four goals to win a three-way tiebreaker with Germany and Switzerland in Group B, and the players were under the impression only three were necessary.

Moments later, with 3:47 remaining in the contest, the forward hopped on a loose puck which bounced off a German defender's skate. Kapicakova swatted at it with her backhand and put it over goaltender Sara Brammen's glove to make it 6-2.

"We knew we had to win by something," defender Lily Stern said. "I looked after the game and realized it was four. I thought, 'Wow, that was really close.'"

"Everyone was so happy because it was actually 'Besca' (Kapicakova) who scored the last goal," captain Hana Fancovicova said. "It was the goal that put us into the quarterfinals."

Although it may not have been a golden goal, Kapicakova's tally likely changed the trajectory for Slovakia's women's hockey program which has limited resources and just 452 female players registered nationwide.

"I hope girls can maybe see themselves as us in the future," Stern said. "It's going to be great. It's great to show the people who don't believe in us that we can actually battle and do this."

After being promoted to the top division for the first time and playing on home ice in Bratislava two years ago, Slovakia found itself humiliated. They finished last in Group B with two points and were swept by Switzerland in relegation.

"In that moment, it was devastating," Stern said. "We were on home ice and trying to prove what we could do. Losing was pretty hard."

Motivated to redeem themselves, the players were then handcuffed by Covid-19 lockdowns. Ice rinks shut down. Formal training came to a halt.

"Even if we tried to get on the ice (during lockdowns), we'd get the police called on us," Stern said. "We managed to go on a lot of runs, use home gyms. We did what we had to do."

Restrictions began lifting for tournaments to resume in 2022. Slovakia began preparations to play in Division I Group A. In February, the IIHF suspended participation of Russia, opening a slot at the top-level event here in Madison, Wisconsin.

"The younger players learned we were going at the Youth Olympic Festival," said Nina Hudakova, one of five veterans returning from the 2020 team. "We older players found out on social media. It was a big surprise for us. We were so excited and looking forward to being here."

Before the tournament, Slovakia's head coach Gabriela Sabolova said she hoped her team would be able to take advantage of the second chance and "stay here."

Through the first two games, the opportunity appeared to be slipping away. The Slovakians fell 4-0 to rival Czechia in the opener. They played a tighter contest against the Swiss the following night, but surrendered the game-winner with just over seven minutes to play in an eventual 3-1 loss.

Sabolova threw out the plan she came to Madison with. She kept the girls away from the rink on their off day and changed their routine. Sabolova and her assistants revisited their special teams strategies.

Slovakia not only earned their first win, but the power play went 2-for-3, keying a six-goal outburst. When the buzzer sounded, the celebration and a whirlwind 24 hours began for the Slovaks.

It started with general manager Lubomira Kozanova holding a speaker aloft blasting music while leading an impromptu parade of players out of the locker room and through ice level at Bob Suter's Capitol Ice Arena. Players' phones flooded with messages of congratulations.

"The captain of the women's team (Nicol Cupkova) shared the final result of the game (on social media)," Fancovicova said. "It was nice to see they were happy and excited for us."

If Hollywood wrote the story of Slovakia's U18 women's team, it would fit somewhere between "Miracle," about the 1980 United States Miracle on Ice, and "Mystery, Alaska," about a small-town team given the chance to face the NHL's New York Rangers.

The team returned to the hotel close to midnight, so most players managed only a few hours of sleep. Somewhere between bleary-eyed and wide-eyed, the Slovaks travelled to LaBahn Arena at 6:45 to prepare for a 16:00 matchup against powerhouse Canada.

Assigned a locker room a moderate distance from the ice surface, the coaches and players had to walk through a hallway which is, essentially, a Wisconsin hockey Hall of Fame. Plaques and murals adorned the entire path to the rink.

"Wow! This is amazing," forward Emma Plankenauerova said as she passed by a mural dedicated to the Olympians who played at Wisconsin.

With only 30 minutes to practice, the girls focused on getting a feel for a slightly bigger ice surface. After running through drills at a slower-than-usual pace, Sabolova gathered her team at centre ice, split them into two sides and just let them play. A veteran of Slovakian's women's league before retiring in 2014, Sabolova relished the moment as well, jumping in on the action with her squad.

After practice, the team took a slow walk through the entire facility, cameras aloft to capture images of greatness. They were particularly fond of seeing the murals of U.S. stars like Hilary Knight as well as the Patty Kazmaier trophy won by Briana Decker in 2012.

"I think it was a big motivator for us," Hudakova said. "Maybe we can play at this university or some others in the future."

Playing in North America, preferably while getting an education, is now the ultimate goal for these girls. There are no university teams for women in Slovakia.

"When I started playing hockey, I never thought about playing somewhere overseas because I just didn't know there is an opportunity for us Slovaks," Fancovicova said. "But now that we're here, playing for the national team, I think we have a huge chance to go and play at some of the best universities in America or maybe Canada."

That is also what Sabolova hopes for.

"When they come back, they can help the rest of the team, show them the way," she said. "Step-by-step, you have more players abroad, more come back."

And with professional leagues in North America and Europe gaining more traction, their dreams are only getting bigger.

"I don't know what job I'd like to do (for a career)," Hudakova said. "But hopefully I can make money by playing hockey."

Added Kapicakova: "I always dreamed of making money playing hockey. I thought I'd go to Russia, because that's where I thought was the place to make money. That is  all we knew."

As for their quarterfinals match, there were no misconceptions of what the outcome would be against Canada, a team which has medaled in every event and won gold since the tournament’s inception in 2008.

"We knew this was one of the favourites in the tournament," Sabolova said. "I think this was our first game against Canada's U18 team in history. It was really like winning a lottery, like a present for us to have such a such a possibility to play these good players and for our team."

The Canadians jumped out to a 1-0 lead just 52 seconds in and outshot the Slovaks 25-1 in the first period alone. Canada limited Slovakia to five shots and ultimately advanced to the semifinals with a 7-0 victory. Slovakian goaltender Livia Debnarova finished with 58 saves.

"There were not many shots for us this game, but it was also good preparation for next game on defense, to survive (in our own zone)," Sabolova said. "One shift our girls were on the ice three minutes and Canada changed lines three times. We thought they were going to die on the ice."

The players fully appreciated the opportunity to face — and learn from — an elite team like Canada.

"It was great," Stern said. "We had a lot of stuff to try out and see how do. They're definitely a really good skating and puck possession team. We tried our best. It was a learning experience, definitely."

The Slovaks are guaranteed their best finish – for either the women's senior and U18 teams — at the top level regardless of their result against Czechia on Sunday. That is a feat the girls have not quite processed yet.

"We might only realize it when we calm down a bit that, 'wow, we did well,'" goalie Laura Medvidova said.

Slovakia would certainly like to exact revenge on their rival to finish with a victory, but they are also aware what they have already accomplished is monumental.

"I think it's going to make girls hockey popular in Slovakia," Stern said. "There are not many girls playing hockey. We mostly have boys teams. I think this is really going to help get more girls to play.

"It helps little kids, too. I know there were kids from Ukraine who came to Slovakia and started playing hockey to not think about (what's happening). It's amazing we have this escape to relax and not really think about the horrible things that are going on here or in Ukraine."

"It's not only great for our generation, but for the following generations because they will get the chance to play at the top division of U18 women's worlds," Kapicakova added. "That's just amazing for women's hockey."
Photo Gallery Slovakia 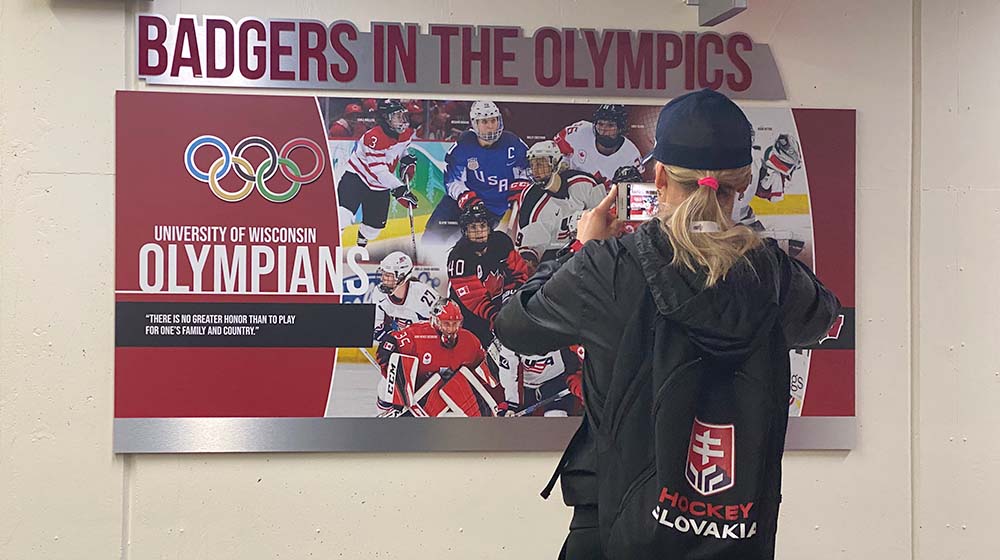 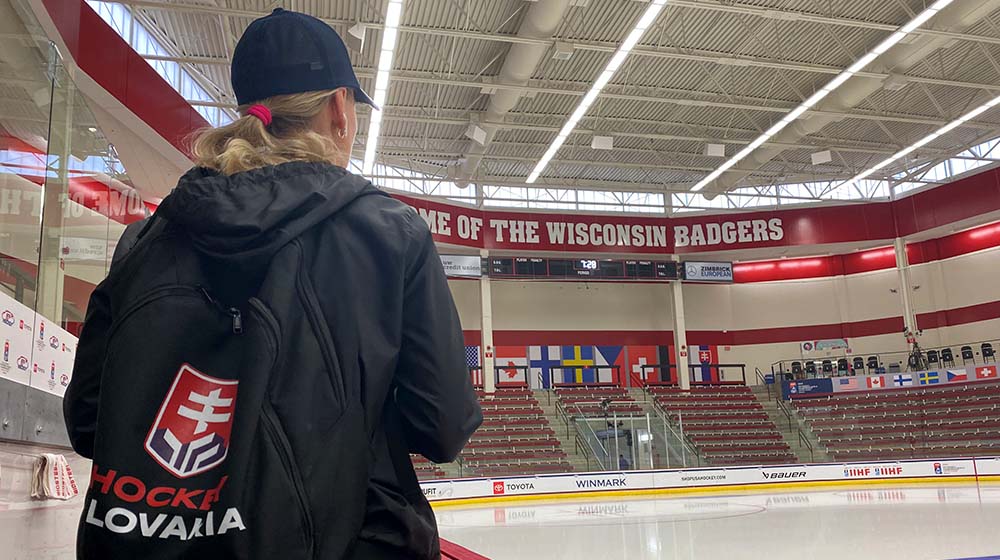 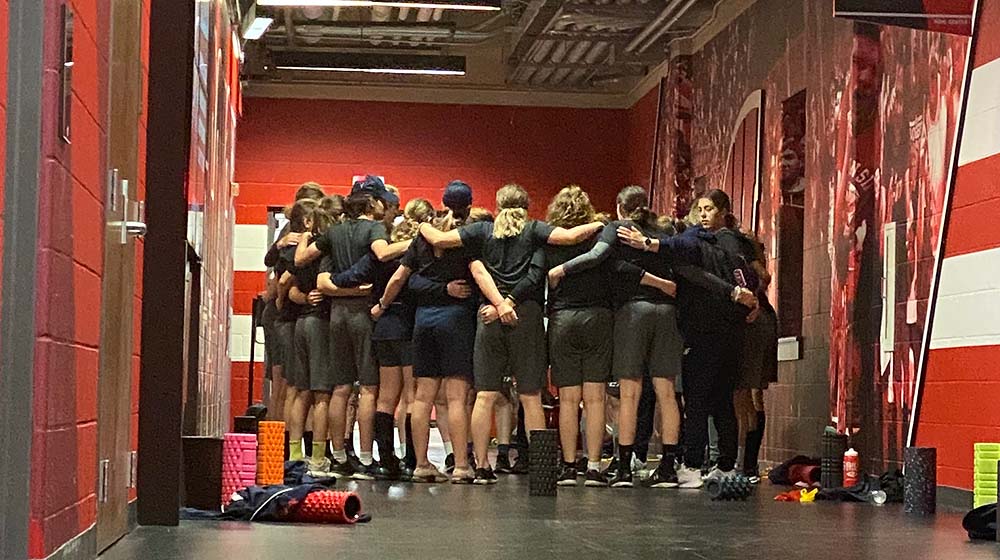 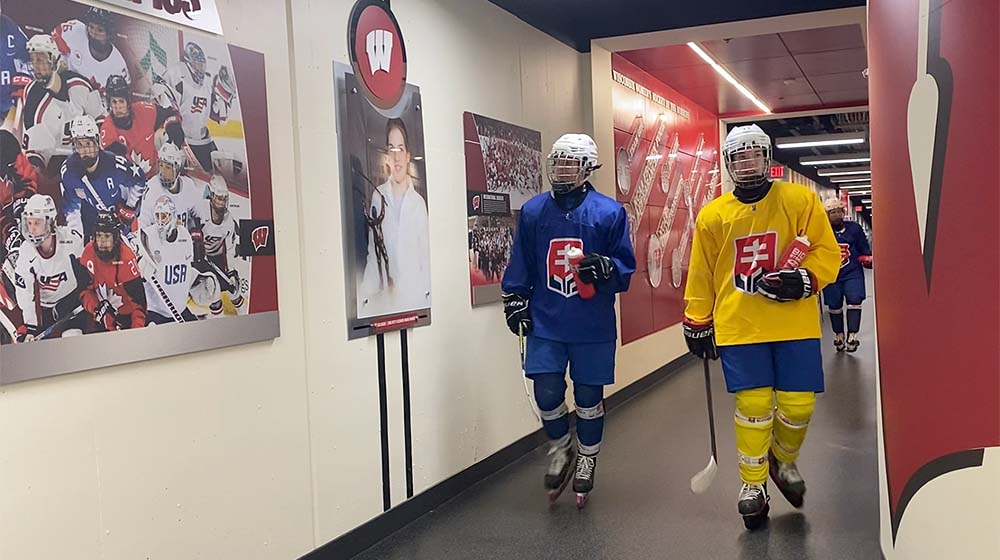 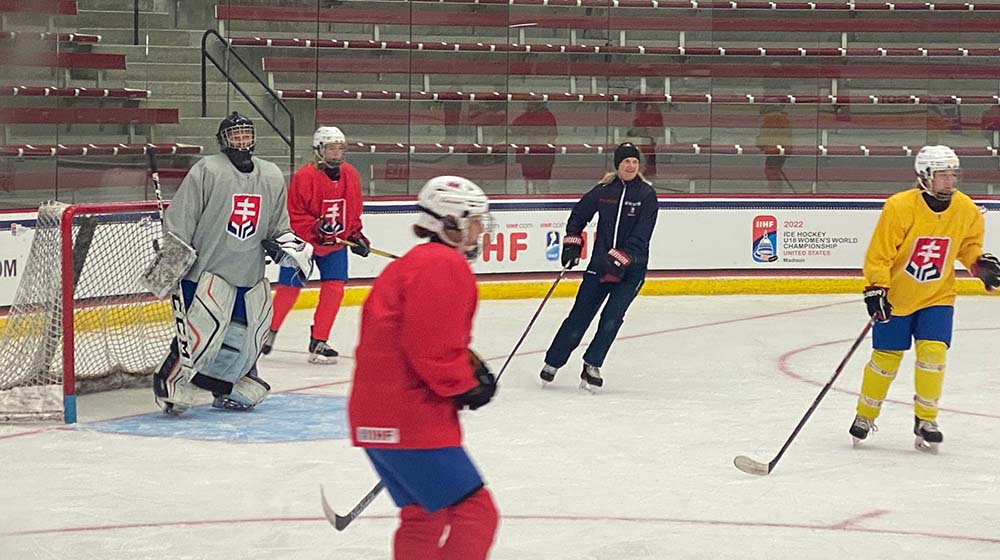 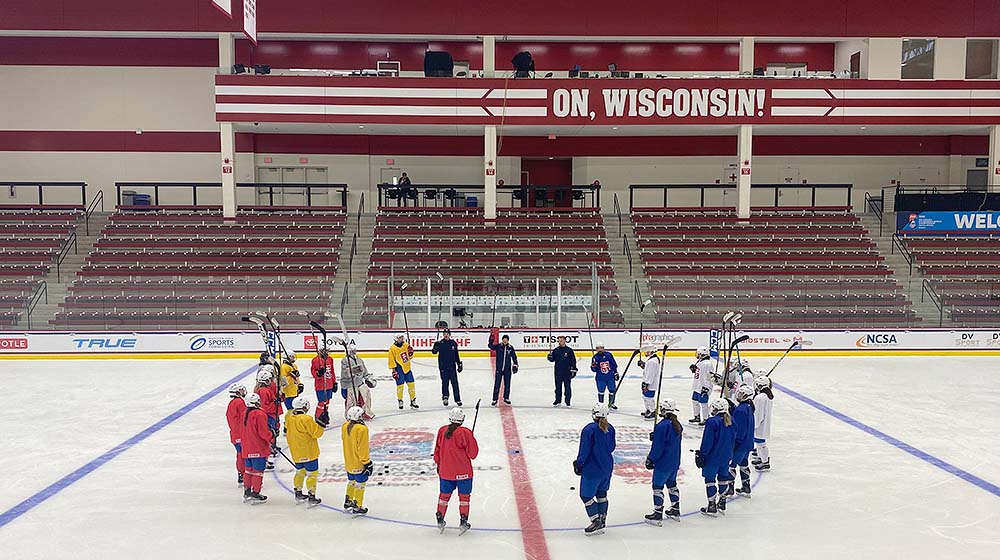 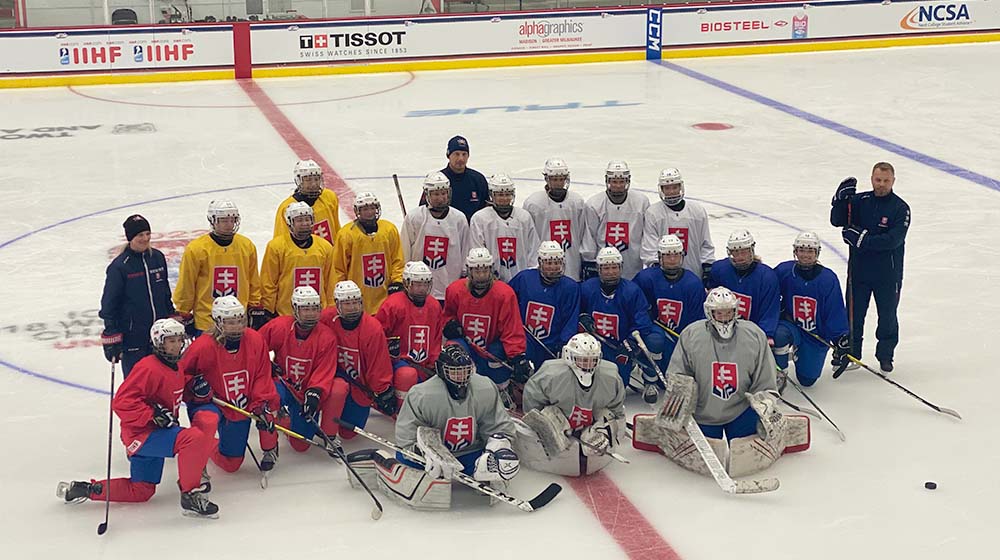 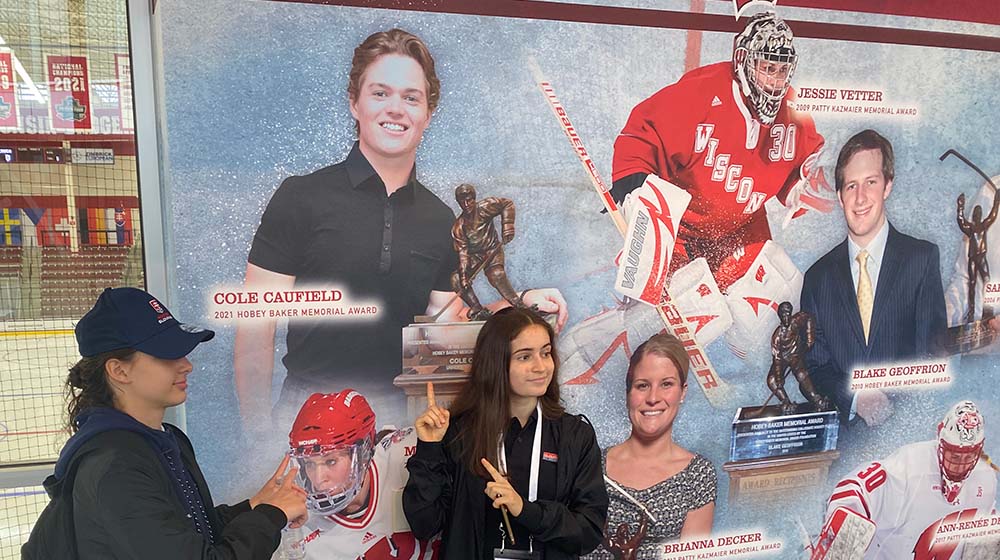 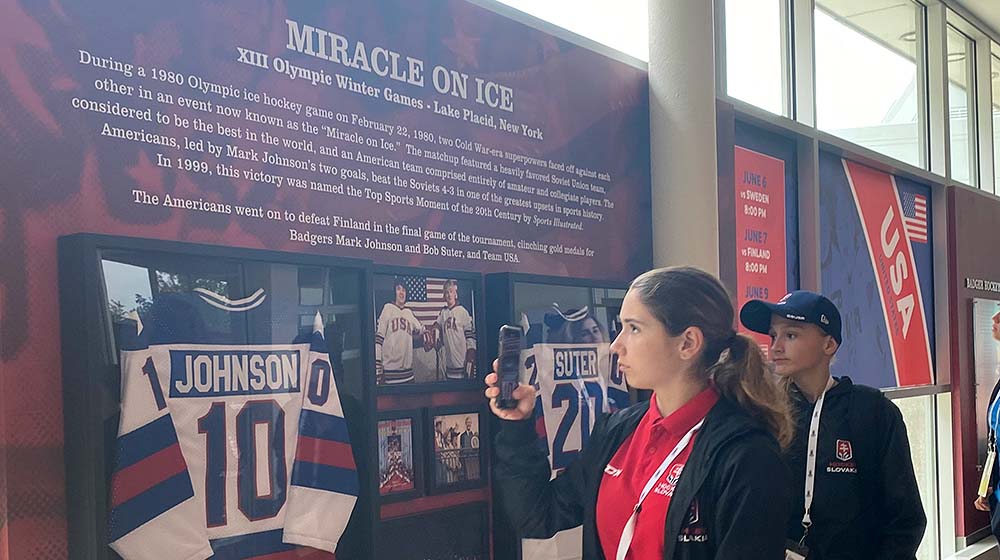 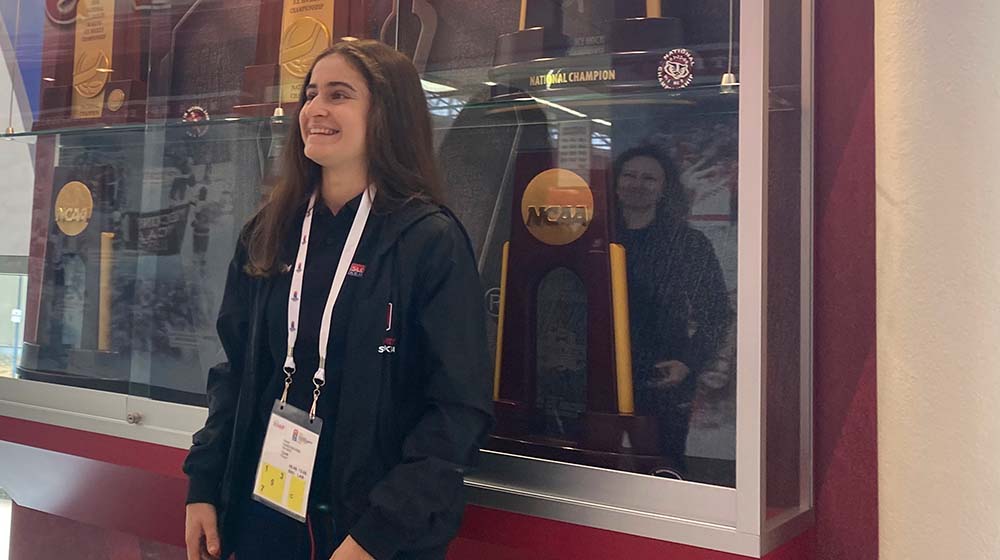 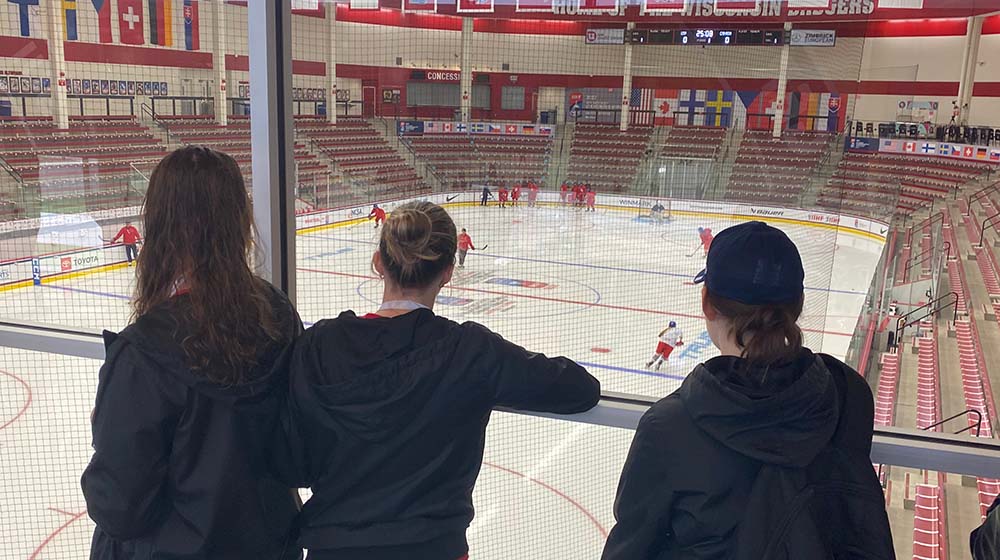