Sweden edges past brave Latvia
Sweden's Patric Hornqvist (#72) jumps up in front of Latvia's Elvis Merzlikins (#30) while Kristaps Sotnieks (#11) looks on.
photo: Andre Ringuette / HHOF-IIHF Images
share
Defending champion Sweden was pushed to the limit by a brave Latvian team – but ultimately edged a 3-2 verdict to move on to a semi-final against the USA.
Goals from Filip Forsberg, Viktor Arvidsson and Oliver Ekman-Larsson finally ended Latvia’s resistance, but this game was live until well into the third period after Rudolfs Balcers grabbed a second Latvian goal with 10 minutes to play.

Scorer Forsberg wasn't surprised by how deep the Tre Kronor had to dig to win this one. "We were prepared for the way Latvia plays," he said. "They were really tough against Canada, really tough against the US, obviously Finland was a little disappointment for them but every other game was close, their goalie's been playing great so it was as hard as we thought."
Throughout the group phase, Latvia prospered thanks to simple spoiling tactics. Keep the ice tight, block up the passing lanes, get in front of shots, protect the net. It didn’t always make for invigorating hockey, but it proved effective and it continued into the play-offs.
World Men
Sweden vs. Latvia (QF)
It wasn't going to be an easy road to the semifinals for Team Sweden. Their 5 penalties to Latvia's 1 made it interesting, but in the end, the returning champions prevailed.
SWE LAT 17 MAY 2018
The opening stanza saw Latvia allow just four shots at Elvis Merzlikins thanks to dedicated defence. Highlights from the blue liners included Kristaps Zile’s recovery to distract Mika Zibanejad after an Oliver Ekman-Larsson pass had sent the prolific Rangers forward into the zone ahead of Nikita Jevpalovs. Even when Viktor Arvidsson demonstrated beautiful stick-handling to waltz into the Latvian zone, he was left with nowhere to go after getting behind the net and seeing his options blanked by a smothering press of maroon jerseys.

It was disciplined stuff – in every sense, as the first period saw no penalties on either team – and it wasn’t without opportunities at the other end. Andris Dzerins, one of the team’s leading scorers in the group phase, had a decent look when Ralfs Freibergs found him all alone on the goalline. A sharp turn and a backhand shot gave Anders Nilsson a rare test in the Swedish goal.

When Sweden did get into a shooting position, it had to solve the challenge of beating Merzlikins. The second period began with Rickard Rakell getting into a great position on the left-hand dot. For once, the Latvian D wasn’t right on top of the Swedish dangerman, but Merzlikins had enough to block the shot.

That was becoming a familiar tale: Merzlikins finished with 31 saves and Zibanejad was impressed with the opposing goalie's performance throughout the tournament. "He’s been great," said the Swedish forward. "He’s been one of the reasons why they’re here, and probably the biggest reason why they’re here. They’ve been playing really well in front of him. They haven’t given up a whole lot of good shots or really dangerous shots, and he’s been able to see a lot of them.

"The rhythm wasn’t really there 5-on-5 for us. But overall, I thought we handled it well, and came out on the winning side."

The trouble with that high-energy pressing strategy is that it can exhaust the defence. And the Rakell chance was the prelude to a passage that suggested Latvian batteries might be drained. Merzlikins needed to be proactive to get a stick on Zibanejad’s attempted pass for the on-rushing Mattias Janmark, then he did the splits to deny Gustav Nyquist.

The breakthrough was coming, and in the 27th minute it arrived. As Forsberg exchanged passes with Adrian Kempe in the left channel, Arvidsson rolled into position in front of the Latvian net. For once, there was no defenceman with him to contest the space of the slot and he was able to screen Forsberg’s slap shot. Merzlinkins still got a piece of it but the puck bounced into the net via stick and pad.

"It was some good play by Kempe and Arvi did a good job screening the goalie so I just tried to hit the spot," Forsberg said of his goal.

Arvidsson's screen upset the Latvians, who claimed goalie interference. The video said no. Sweden led, and the script seemed to be written.

Latvia, though, didn’t bother to read it. A power play reminded the men in maroon that they could go forwards as well as defend, and Ronalds Kenins missed a great chance when he couldn’t get his stick on a Guntis Galvins saucer pass in front of Nilsson’s net.

Then came the equalizer. Kempe shattered his stick in centre ice under pressure from Teodors Blugers, Rihards Bukarts fired the loose puck up the ice and Blugers took it onto the left dot and fired in a shot over Nilsson’s glove. A Penguins prospect, 23-year-old Blugers is relatively unusual in Latvian hockey in that he has spent almost his entire career playing in North America. It's evidence of a changing approach for the next generation of local talent after years of building the national team on the Dinamo Riga program.

Sweden then had to kill 1:54 of 5-on-3 play. Dzerins almost got the rebound from a Roberts Bukarts attempt before Nilsson reacted smartly to smother a rebound in front of Rodrigo Abols. Even as the intermission beckoned, there was one more scare for the Swedish goalie. Rihards Bukarts raced through and fired into Nilsson’s pads; John Klingberg almost deflected the rebound into his own net but an outstretched pad saved Sweden.

It was Latvia's best chance of taking the lead - and it might have been a turning point. "Sweden's a good team, of course, but we had our chances too," said forward Miks Indrasis. "That 5-on-3 could have changed the game if we'd managed to score.

Rattled, the Tre Kronor knew it was time to raise the tempo and an early goal in the third was just what Rikard Gronborg ordered. Arvidsson got behind the defence to produce a superb redirect, thrusting his stick forward to get the killer touch on Mattias Ekholm’s whippy feed across the face of the net. Merzlikins, committed to his right, had no chance as the puck whistled over his left shoulder.

"I thought after the first we played better," reflected Backlund. "We were a little passive in the first. Too many penalties in the second. But when we played 5-on-5, I thought we were the better team in the second, and the third too. They got some lucky goal there and made it a little closer in the end. But we took charge in the third for sure."

Latvia did get the puck in the net – just – after a scrum in front of Nilsson’s net. However, a video review found that the whistle had gone for a holding offence by Mattias Janmark and the Baltic nation had to be content with a two-minute power play. There was further frustration for the Latvians when Sweden added a third in the 47th minute, converting its first power play of the night. Zibanejad’s point shot sparked a melee in front of Merzlikins’ net and the goalie was convinced he was impeded as Nyquist and Rakell wrestled for possession. Ekman-Larsson finally fired the puck home but after using up its video review on the Forsberg goal, Latvia could not query the call and Sweden had a measure of control at last.

If Sweden thought it could now coast through the remaining minutes, there was a rude awakening in store. With 10 minutes to go, Latvia made it a one-goal game yet again when Rudolfs Balcers fired home past a Kenins screen to give Hartley's men renewed hope. However, with Sweden dominating the shot count, the odds were always against Latvia snatching another goal. There was still time for one last effort, Kenins' stick-smashing frustration on the bench told the tale as Indrasis narrowly failed to divert a dangerous feed into the Swedish net in the final seconds. 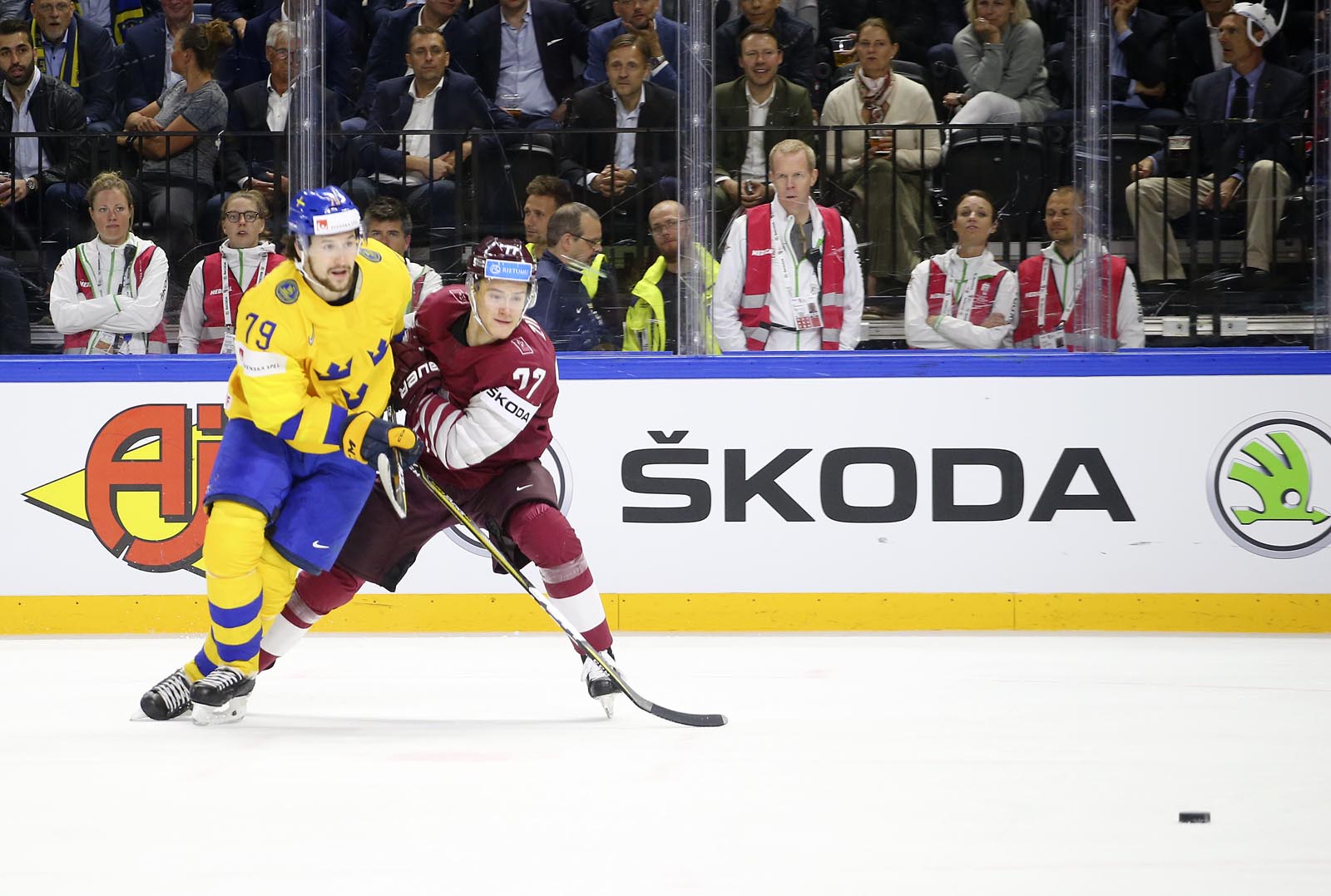 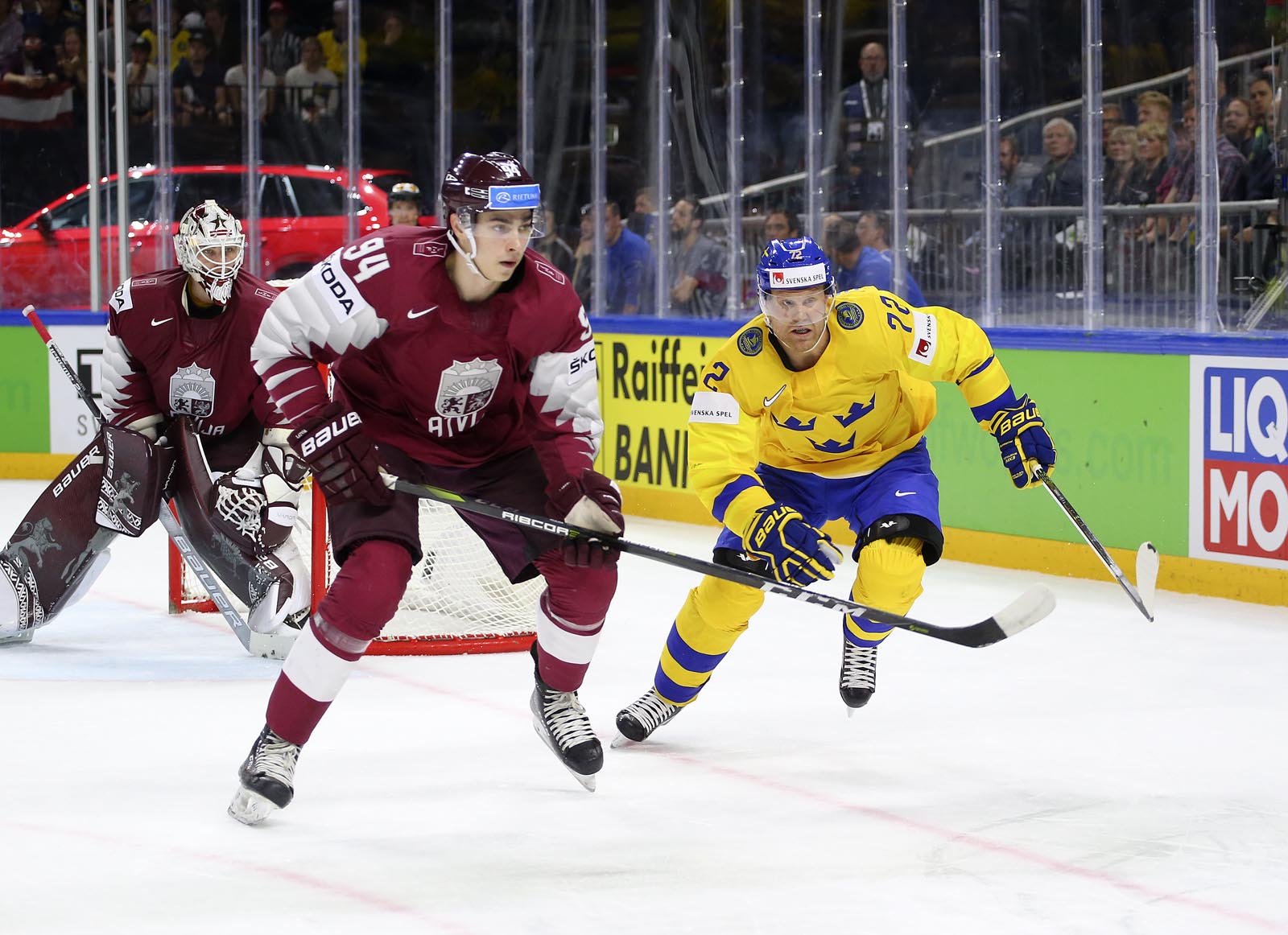 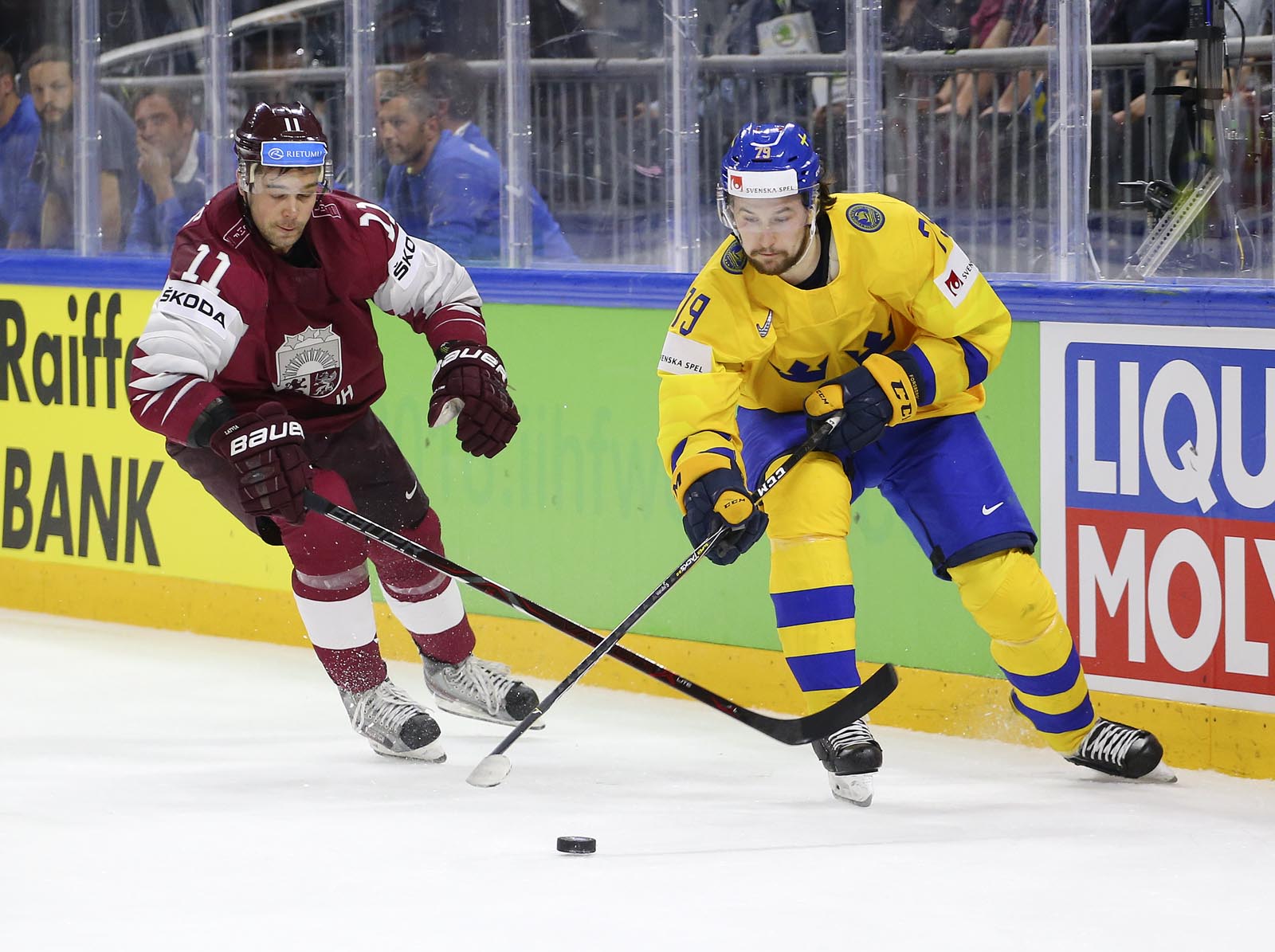 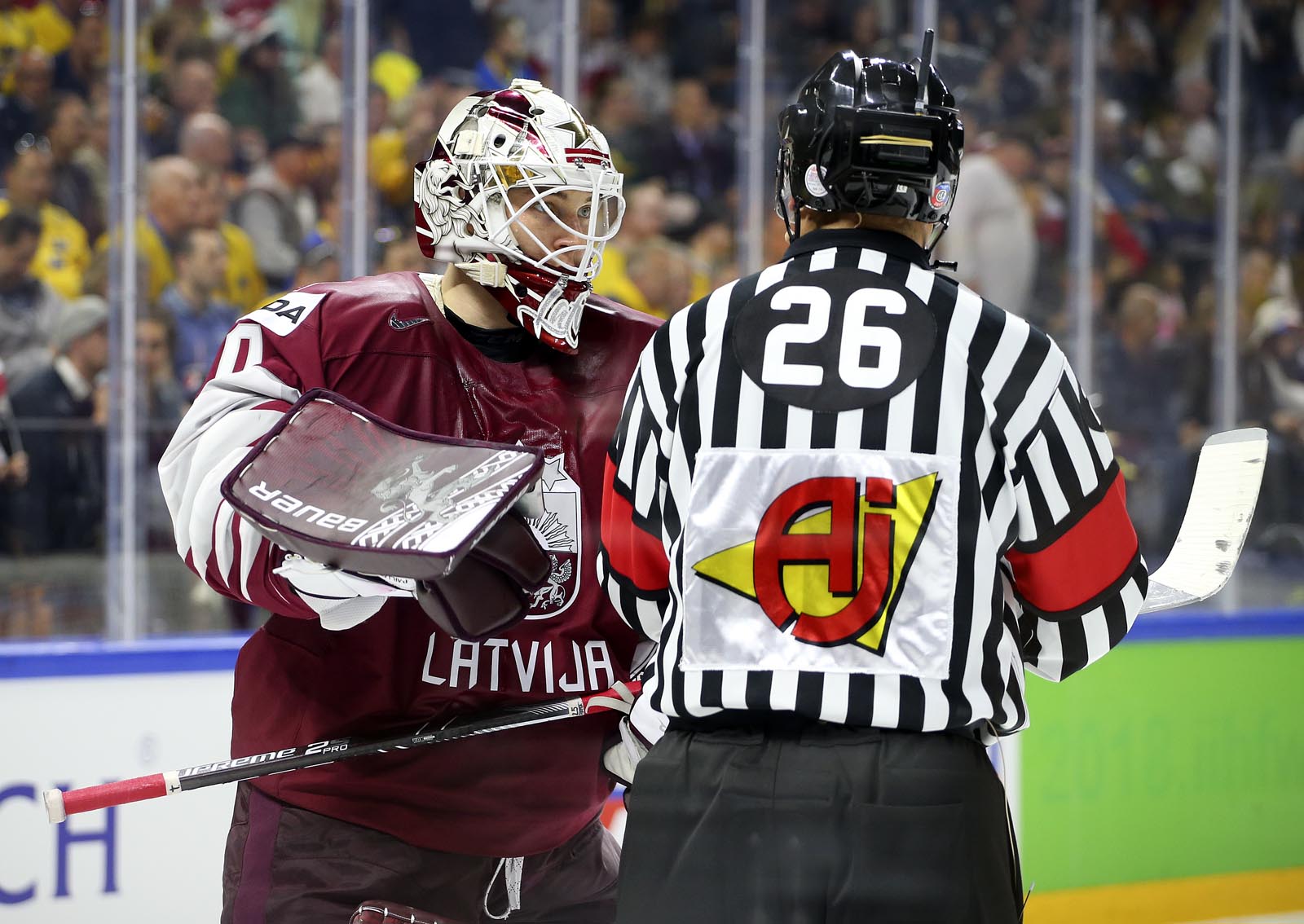 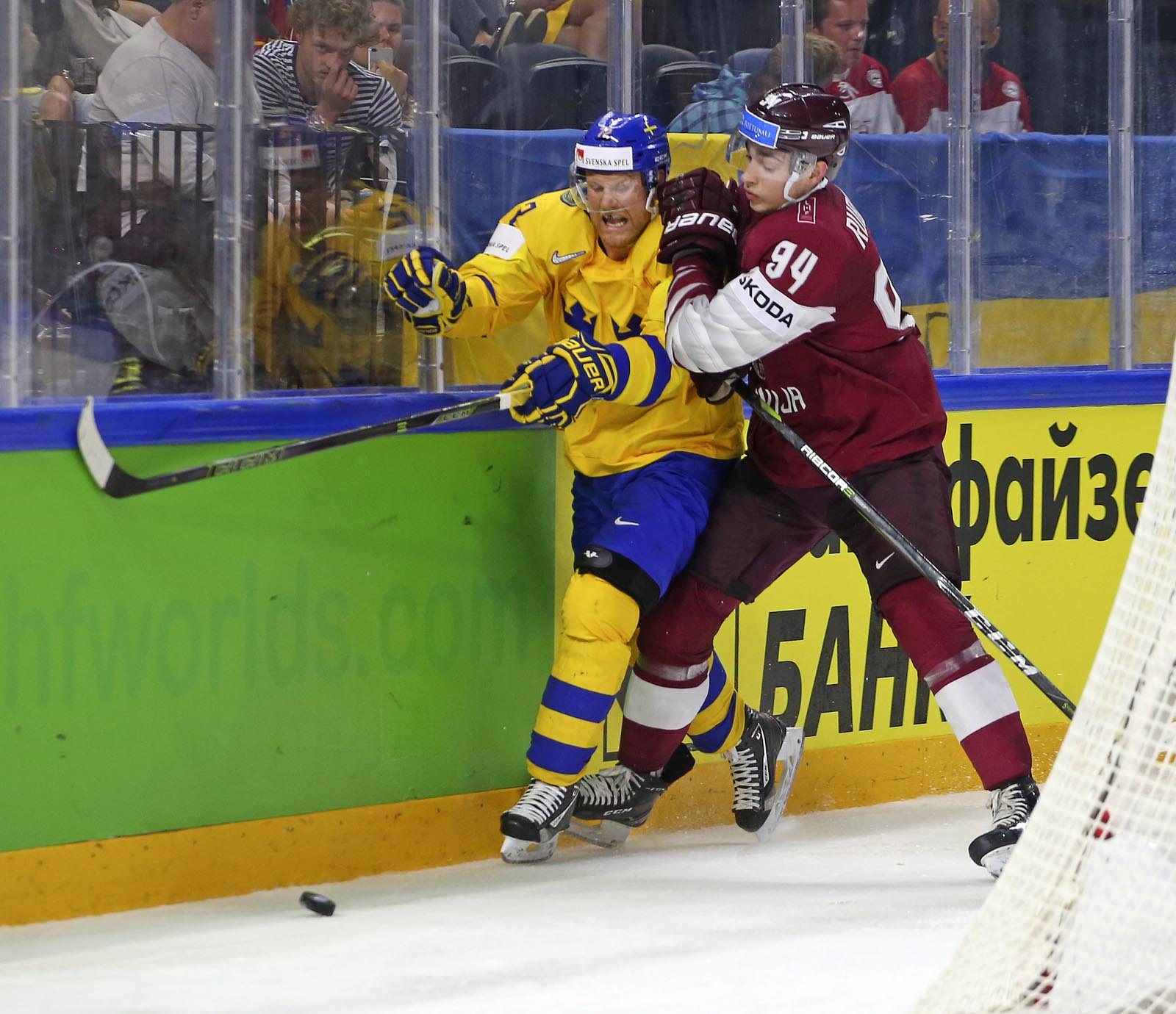 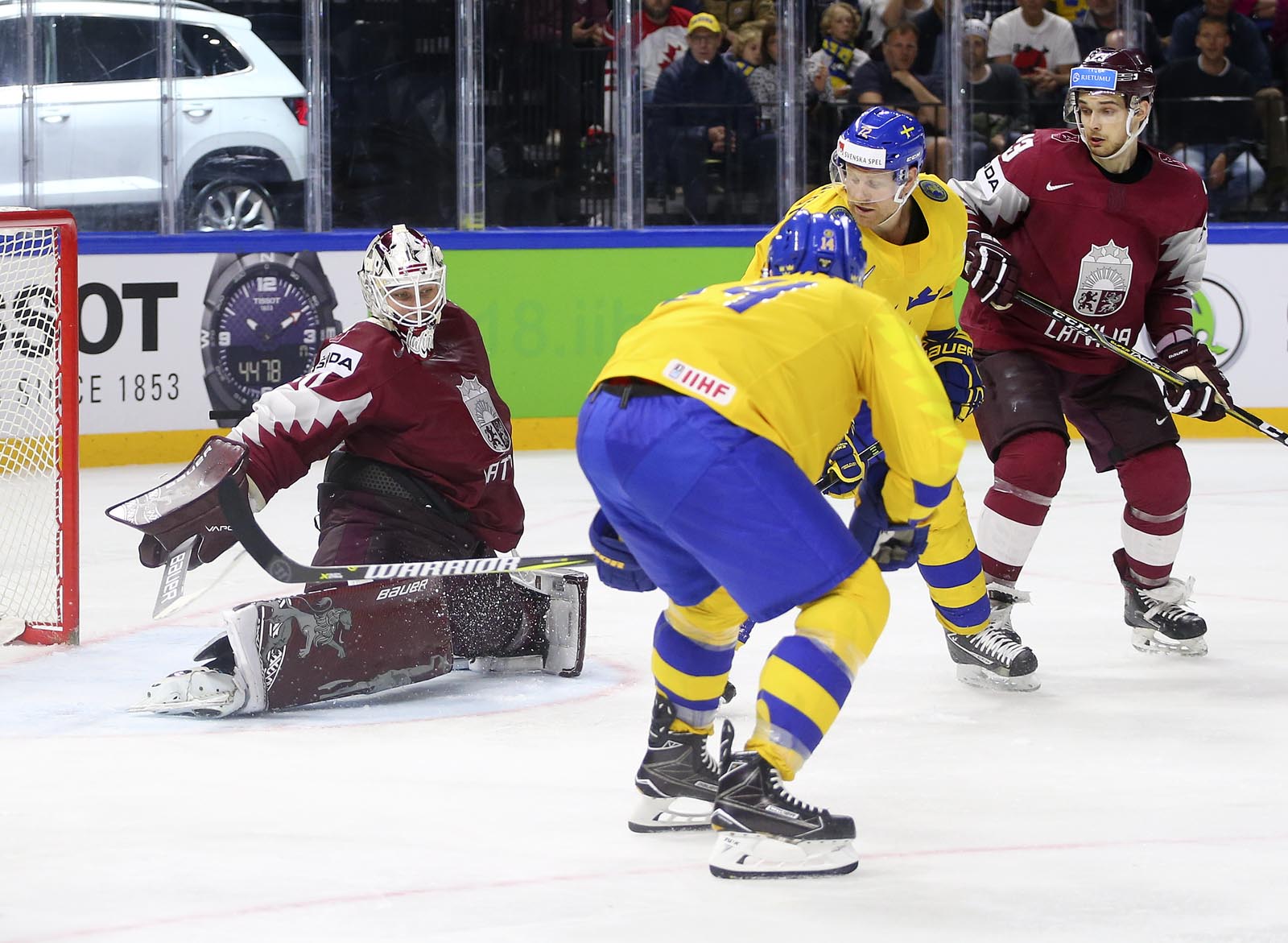 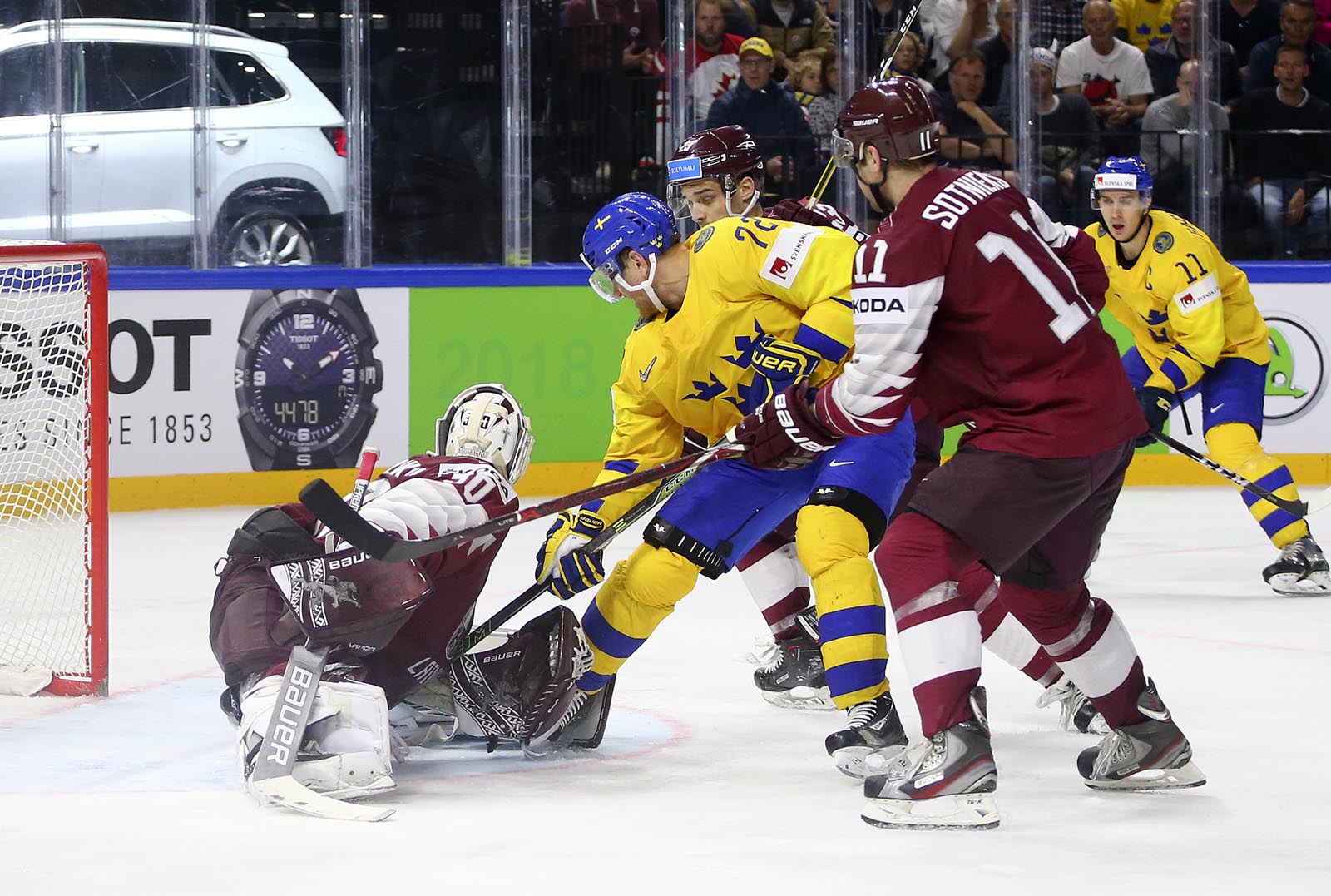 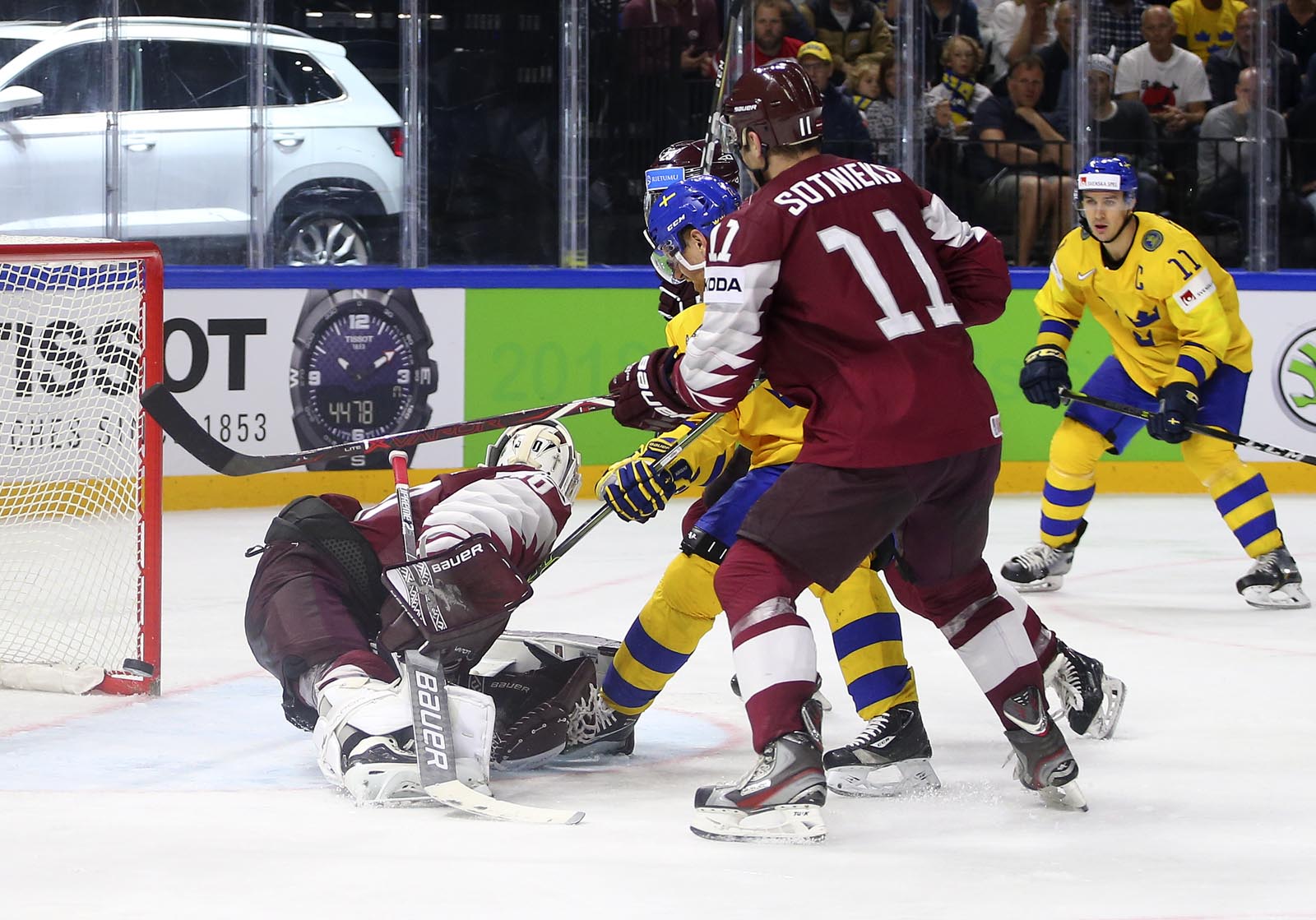 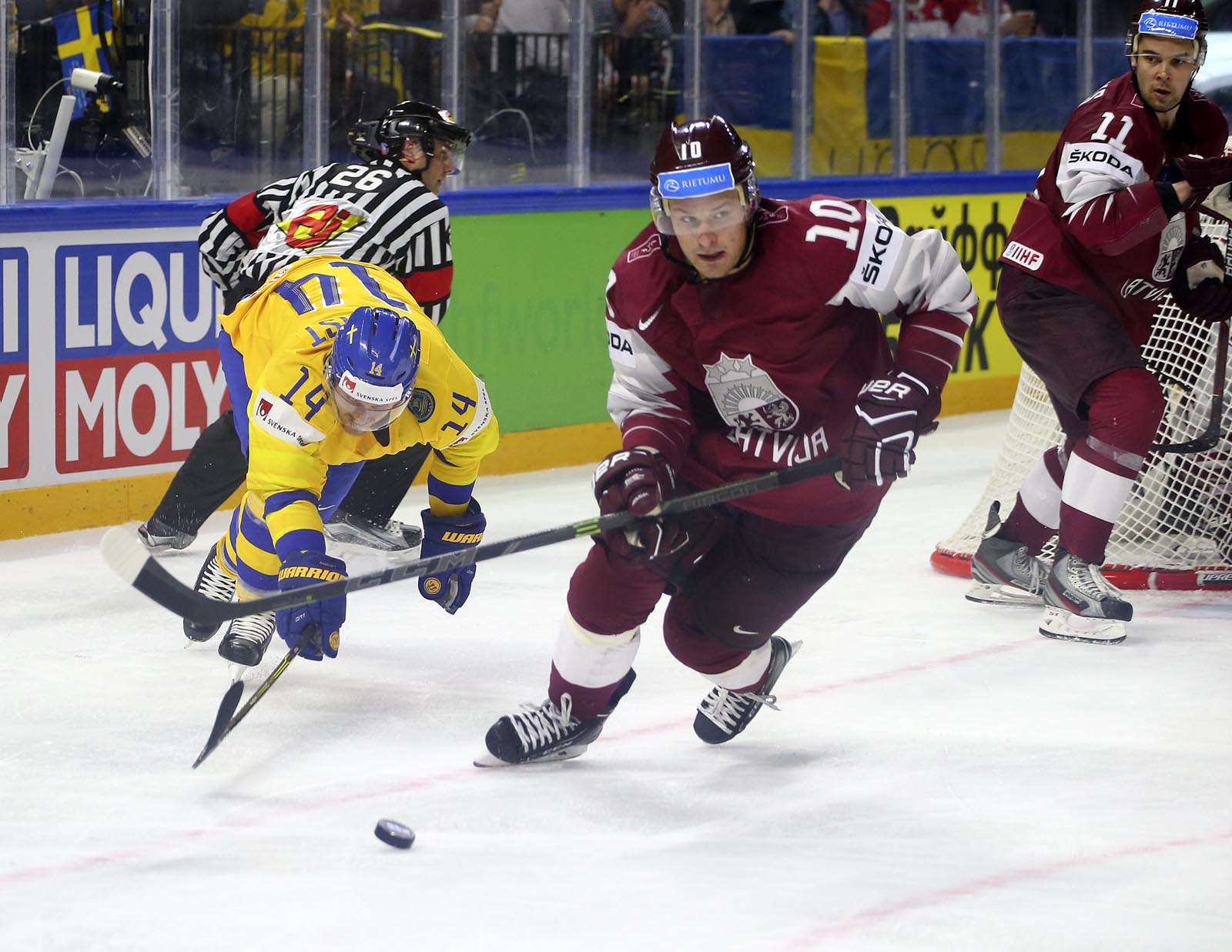 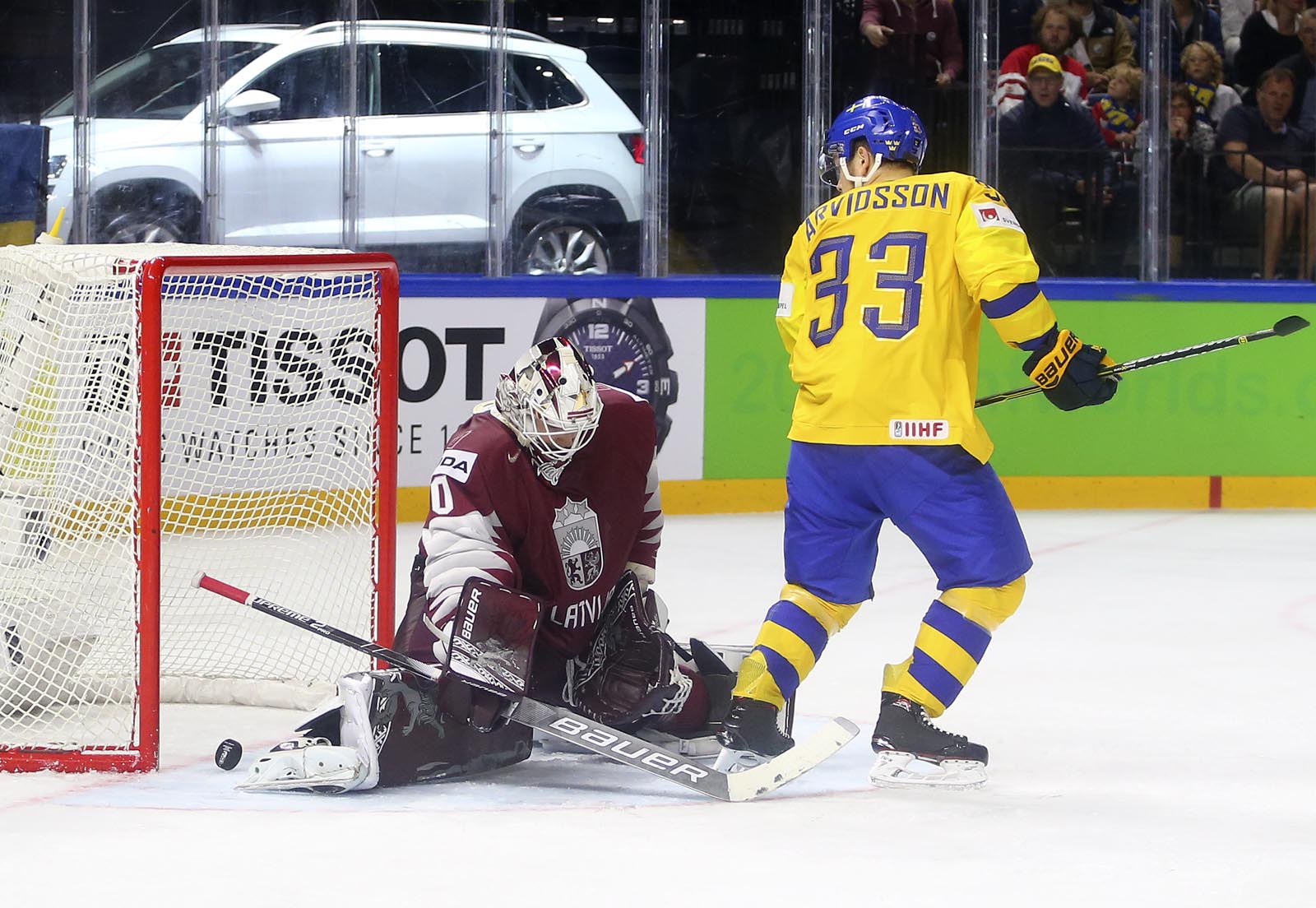 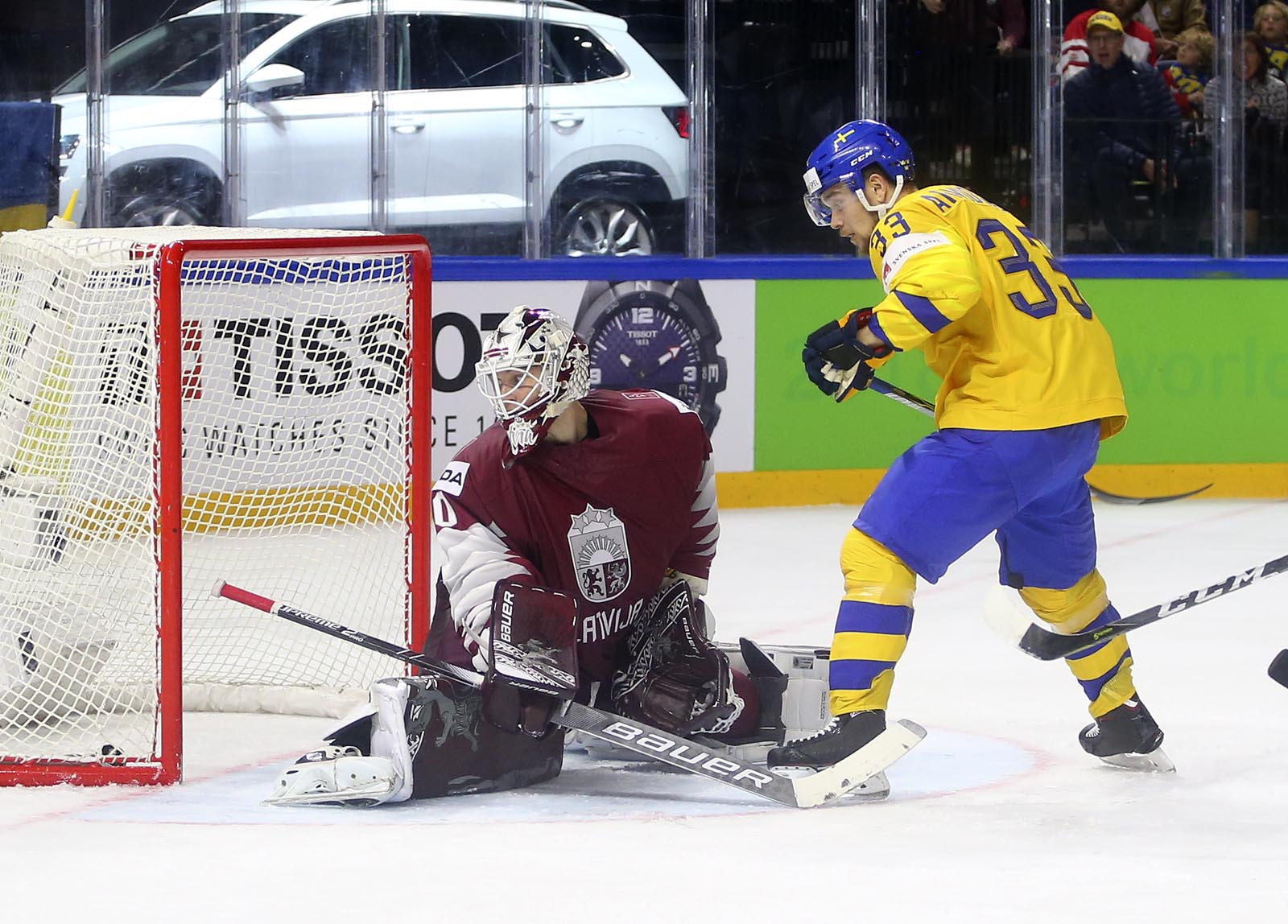 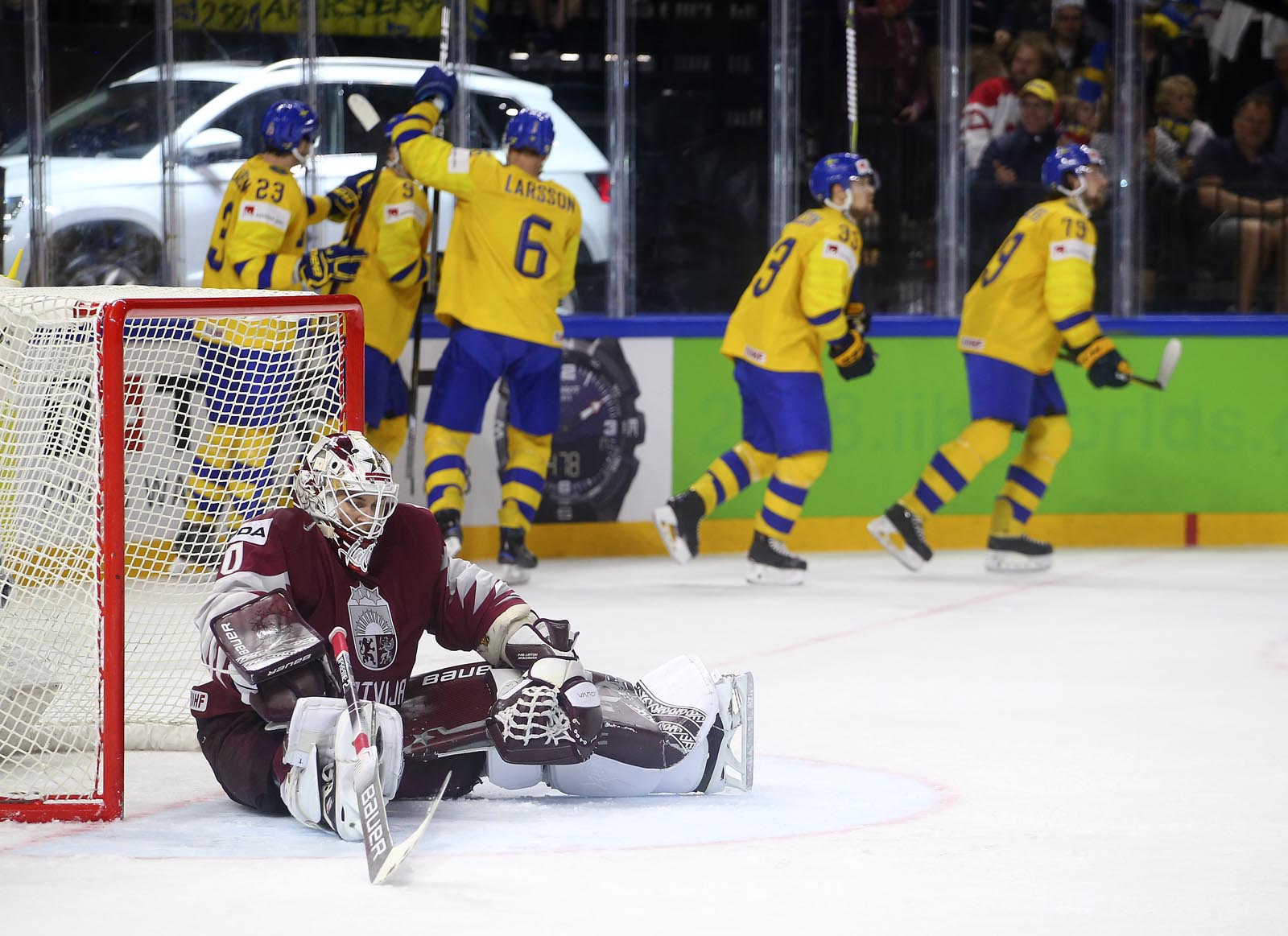 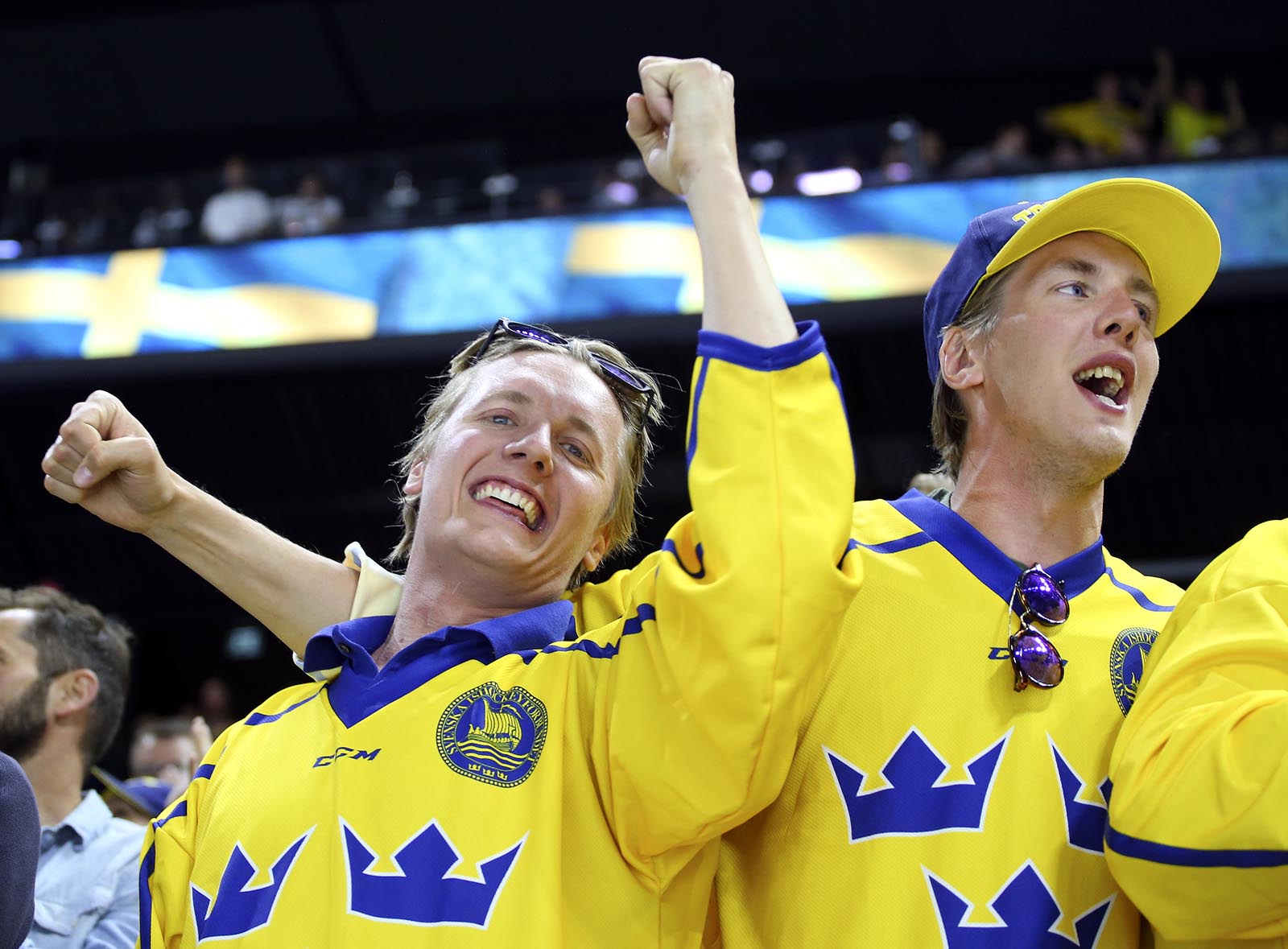 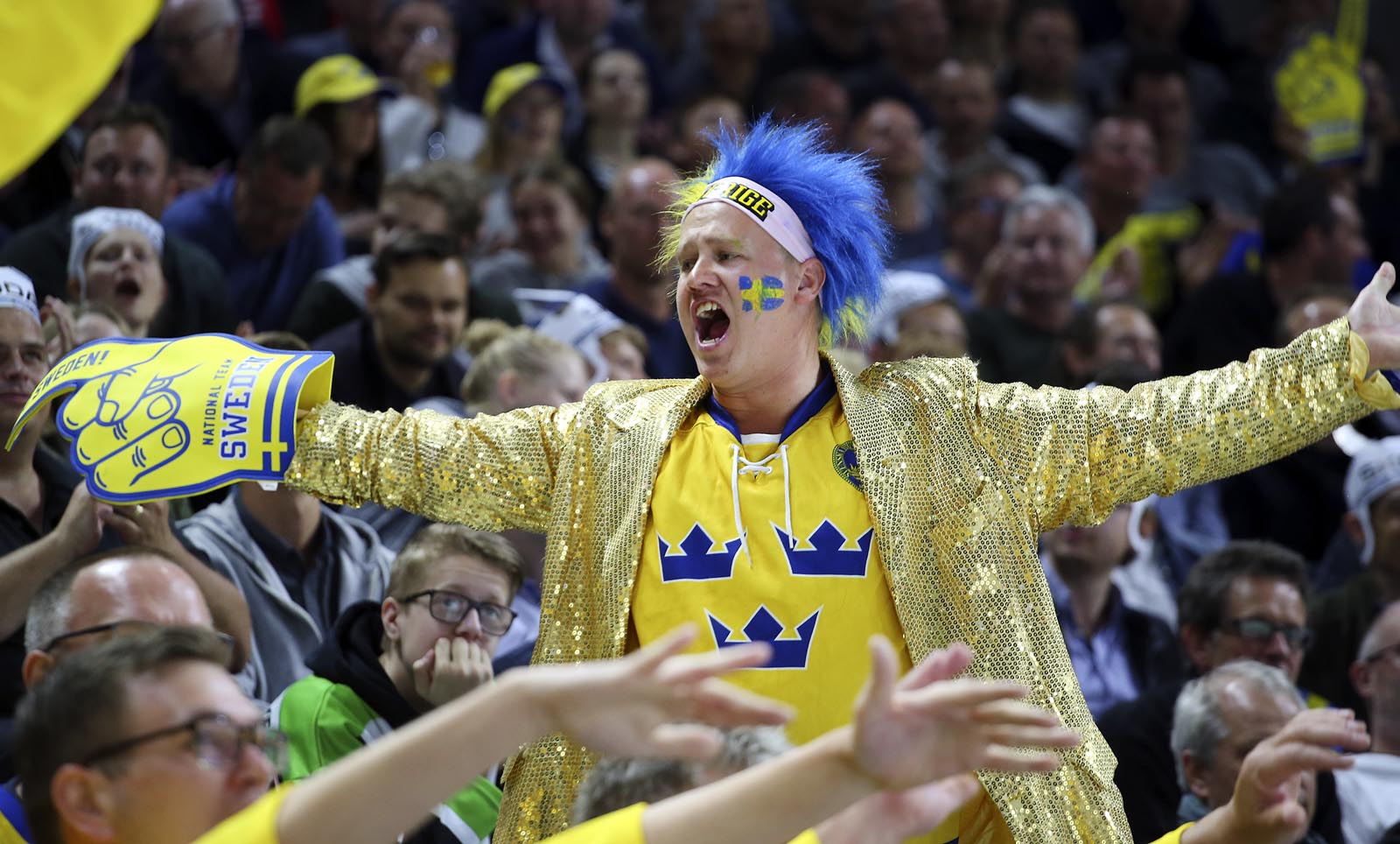 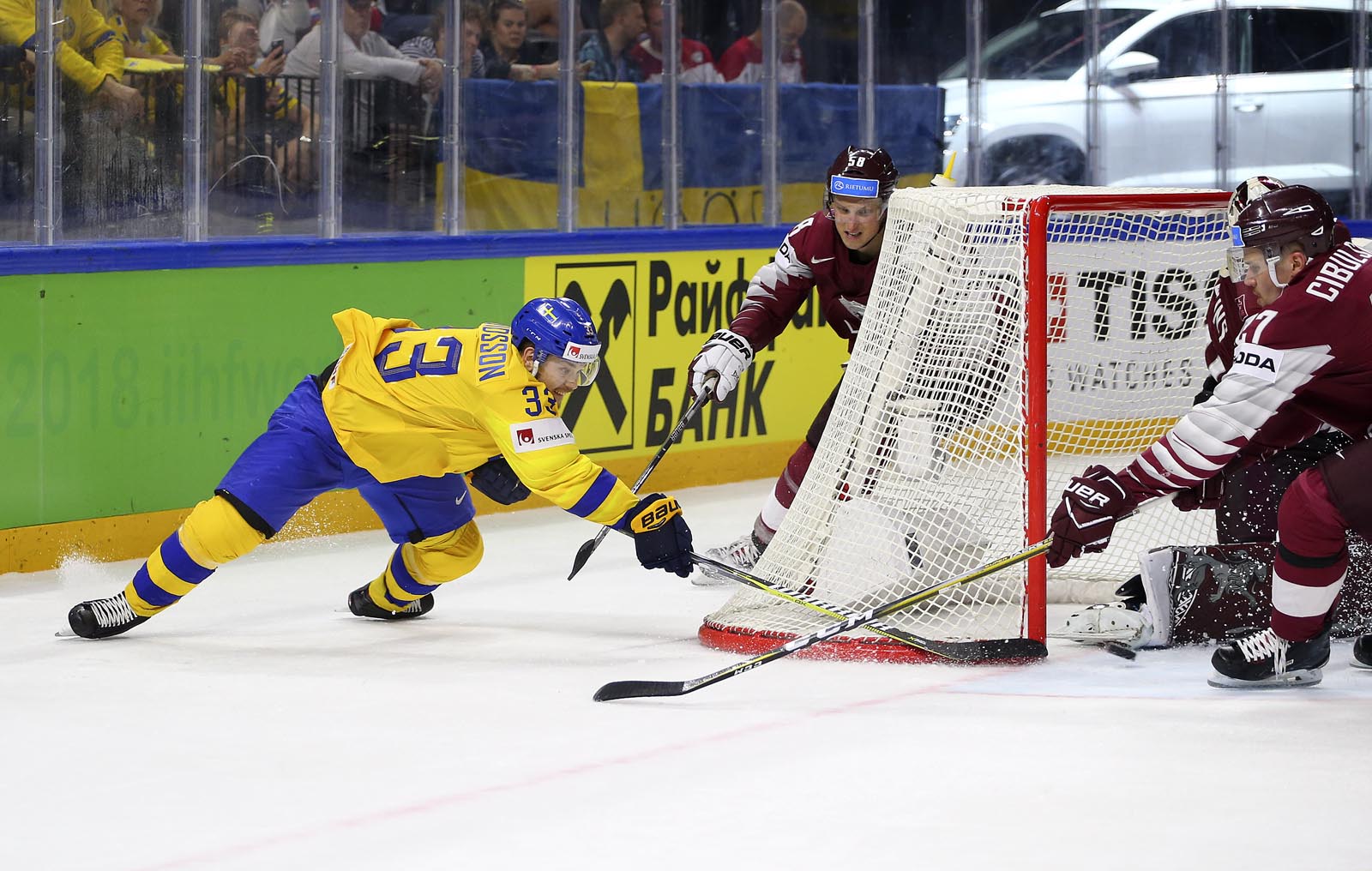 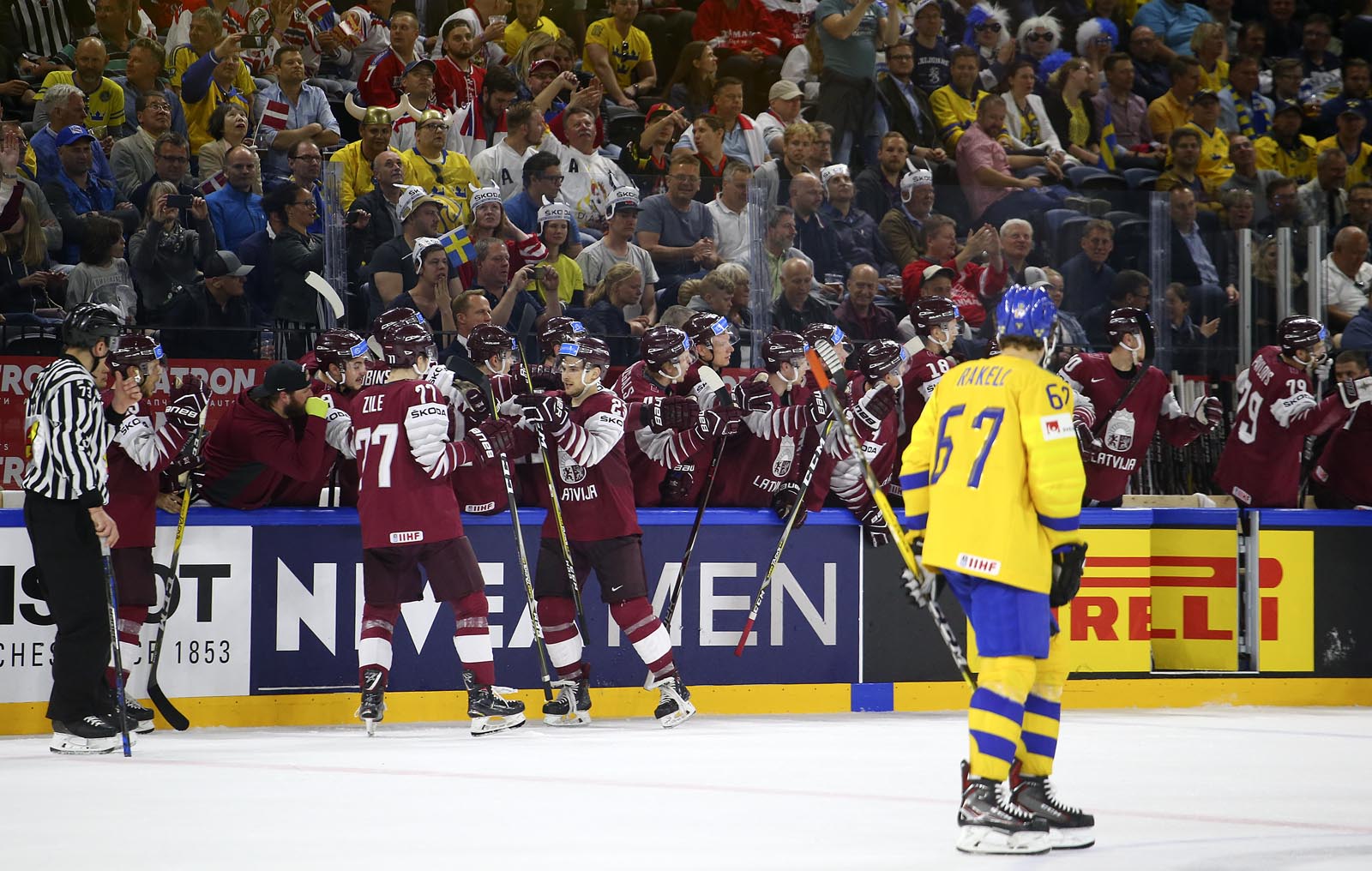 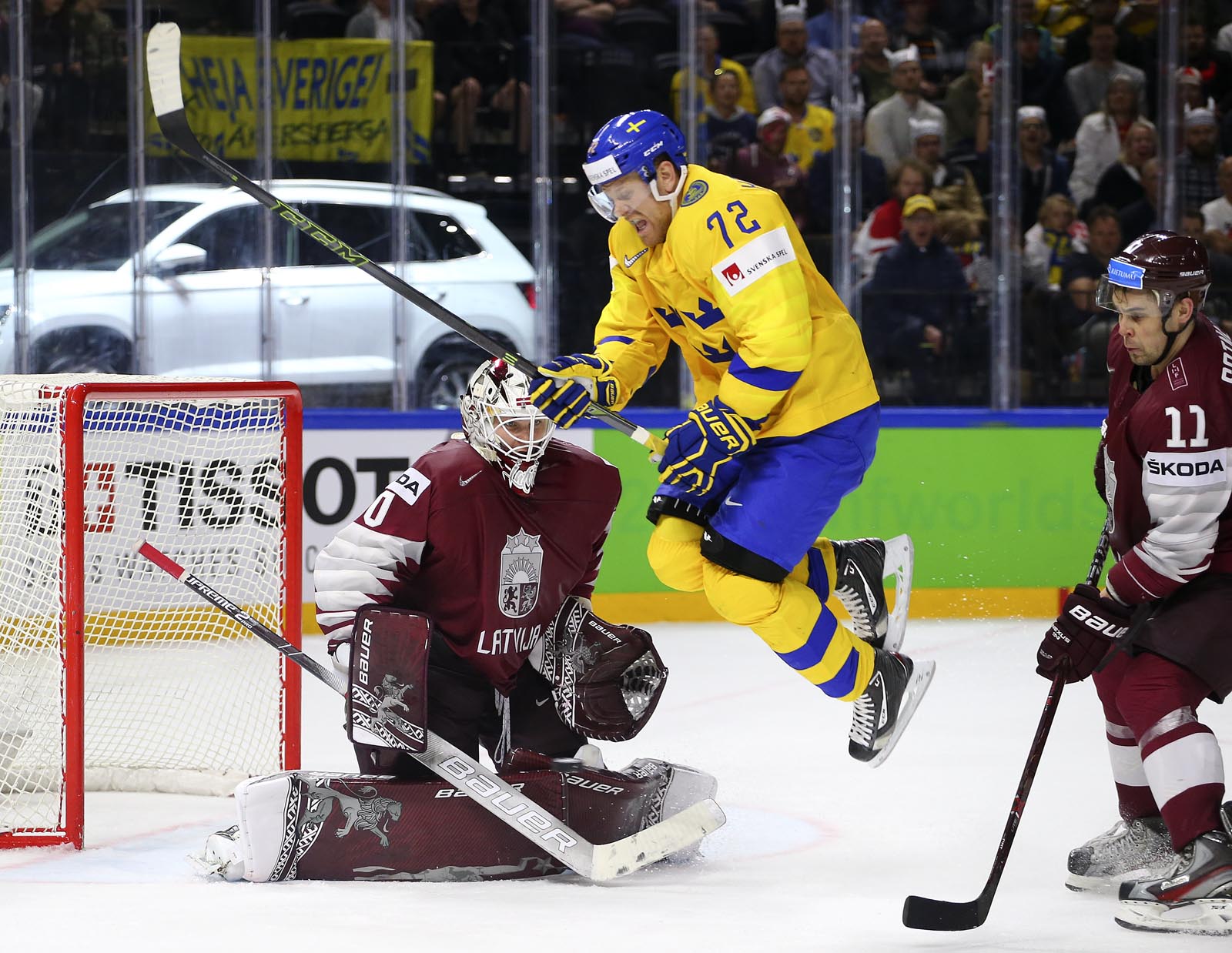 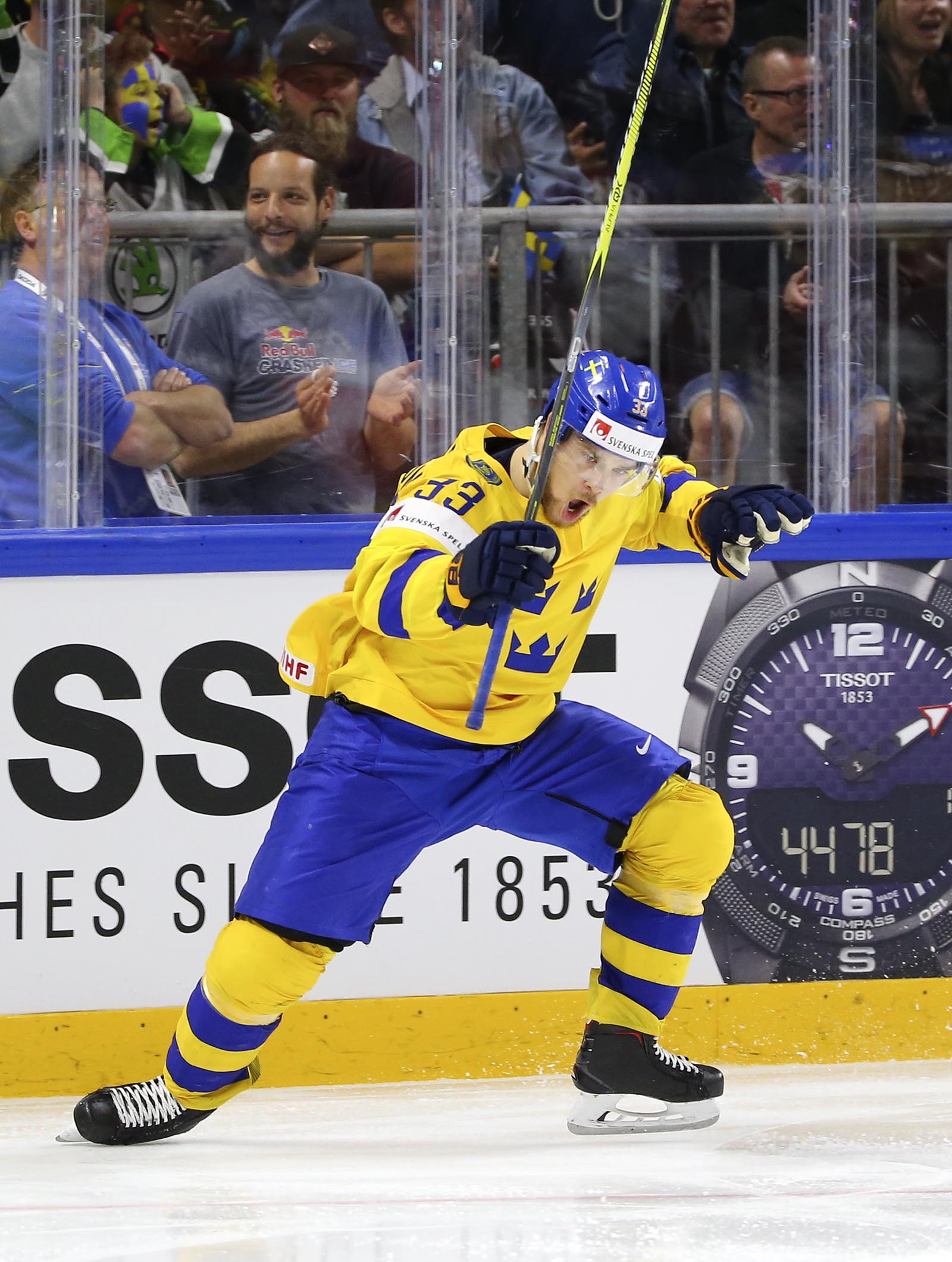 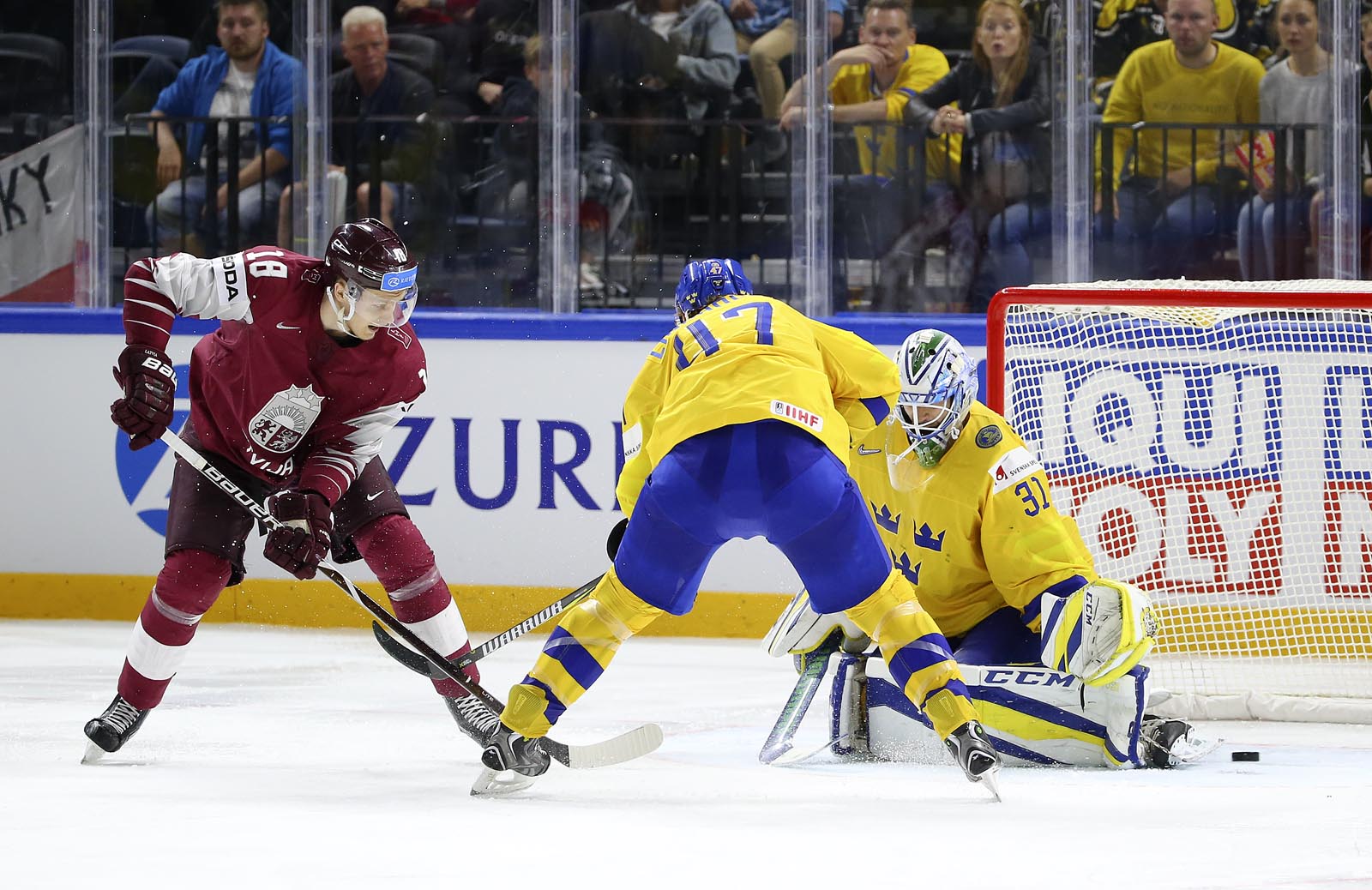 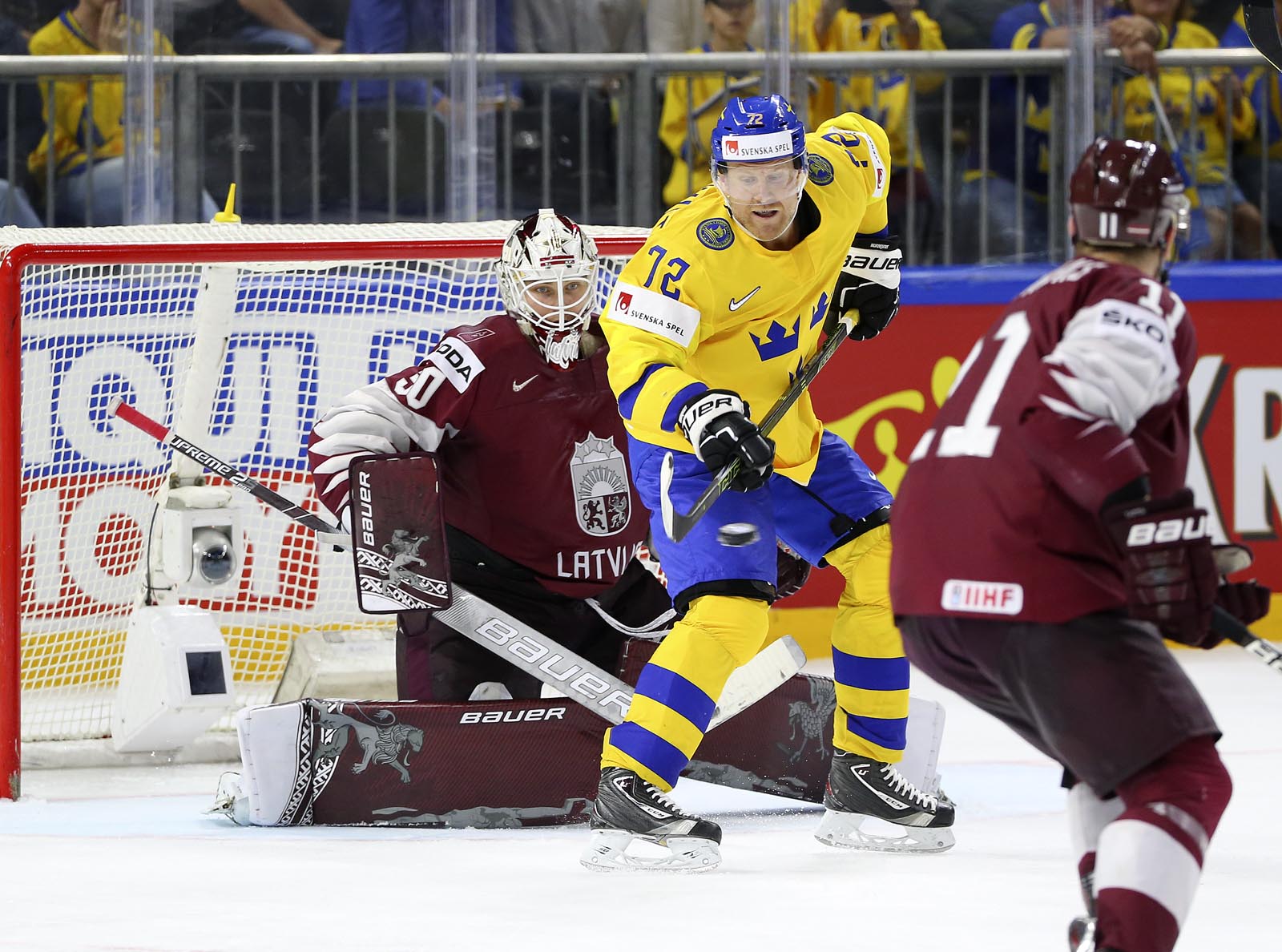 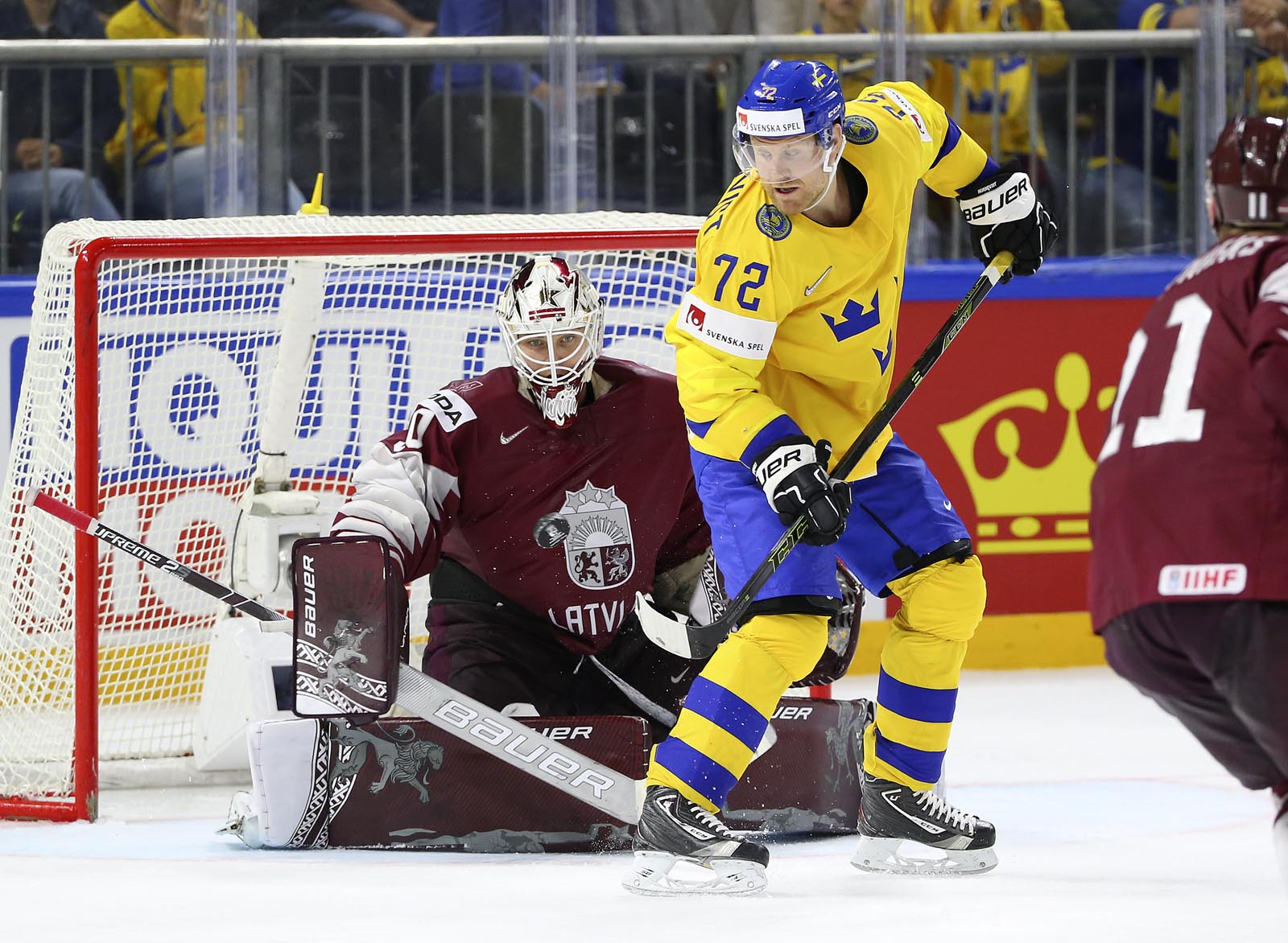 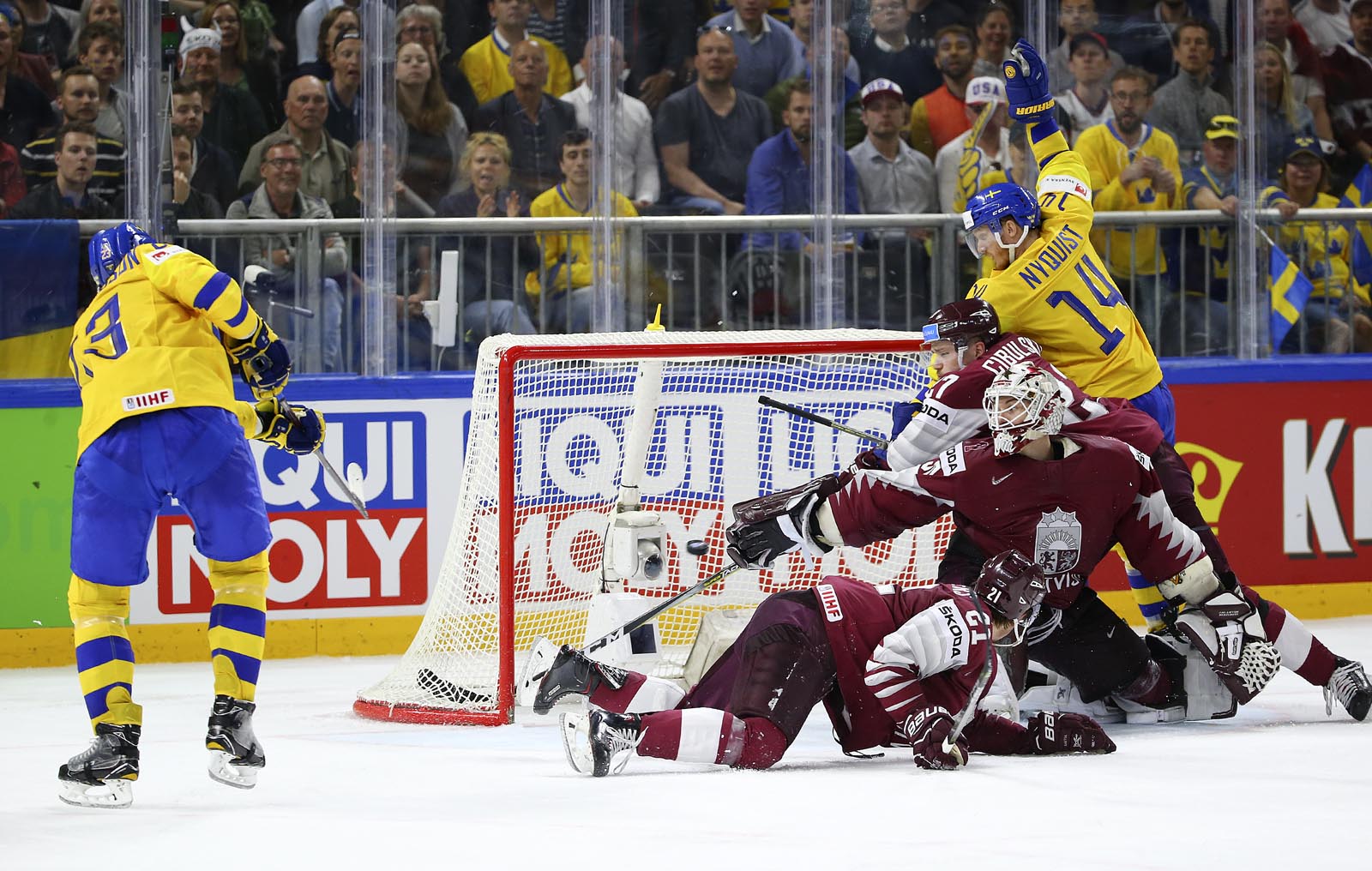 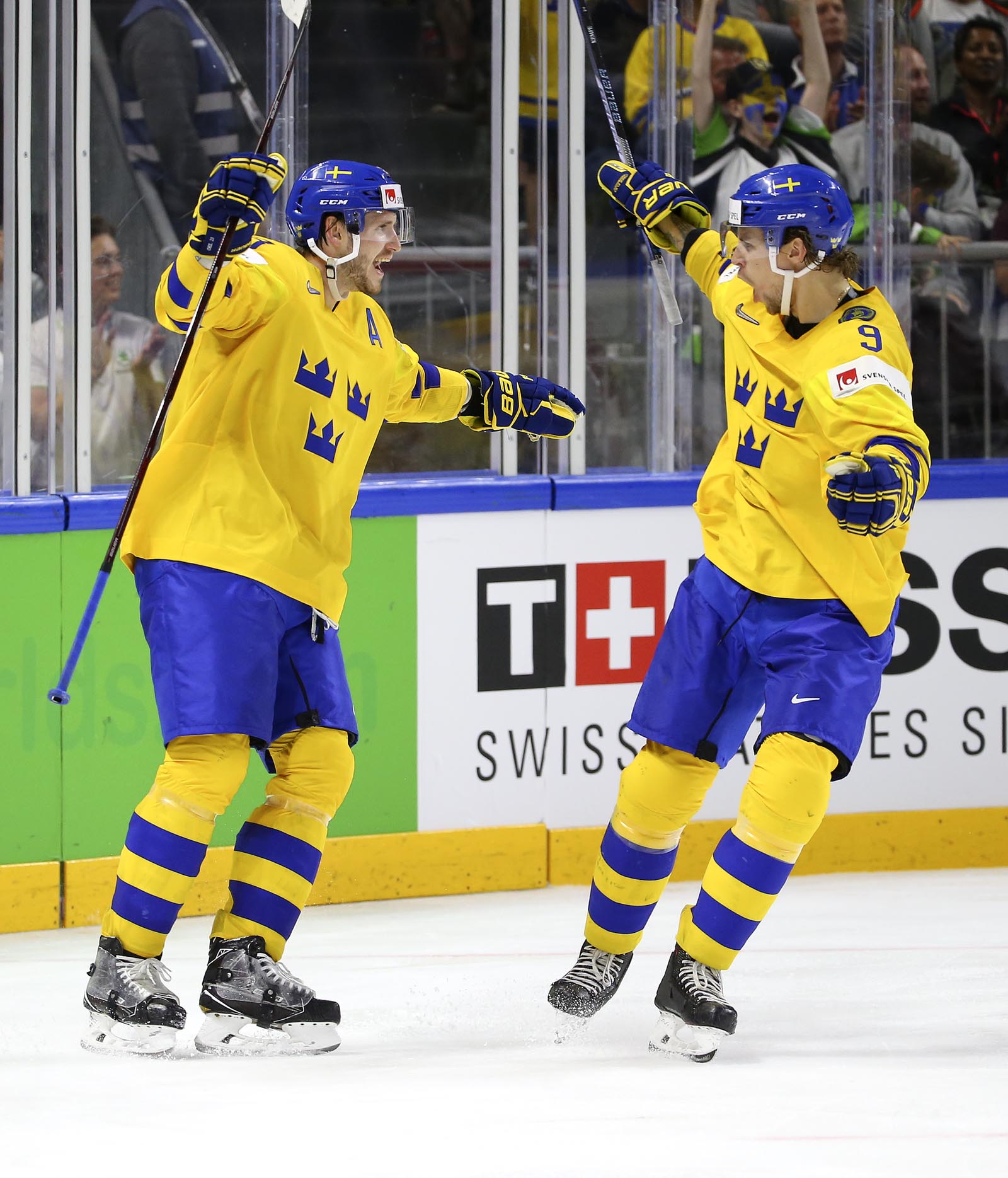 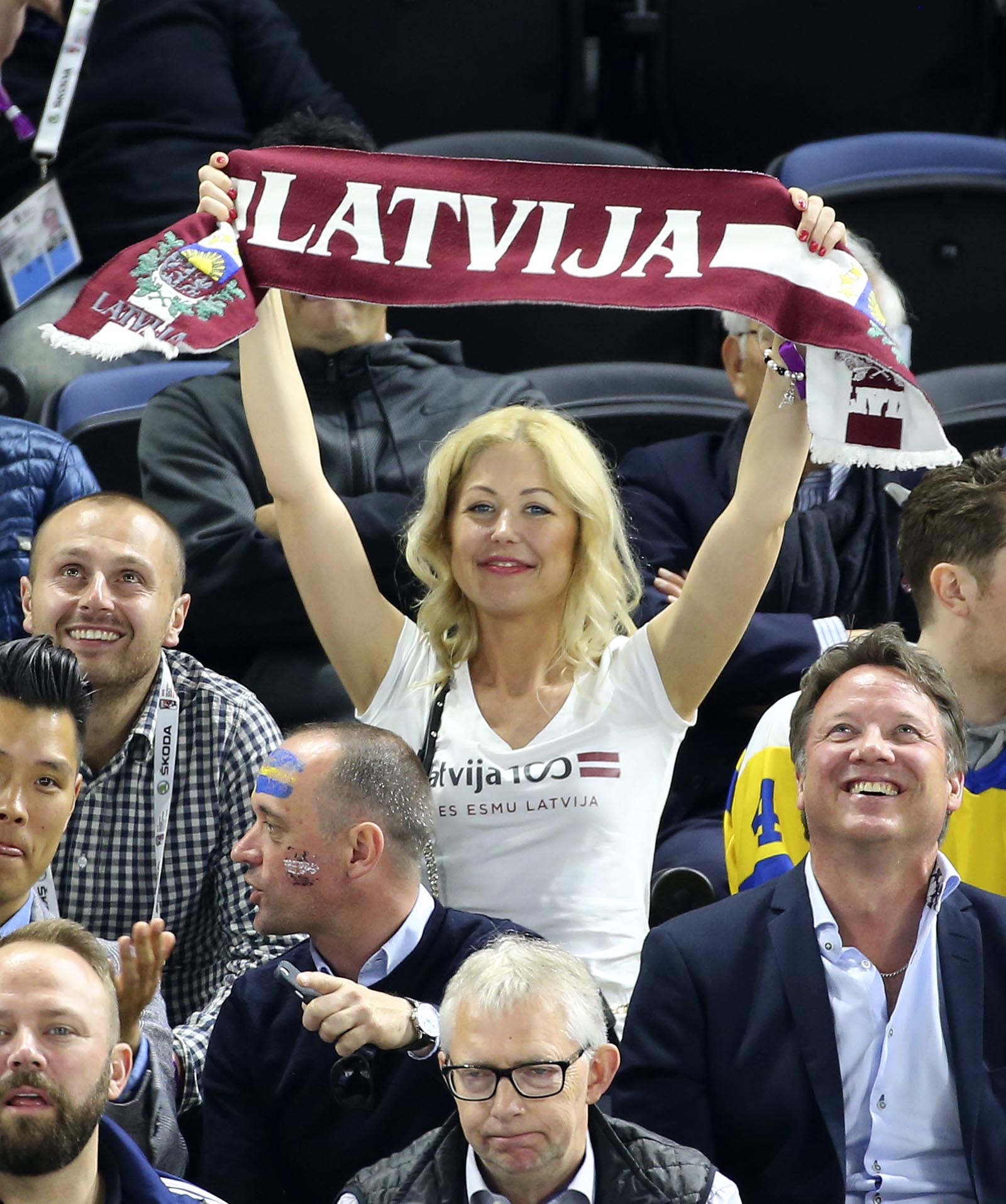 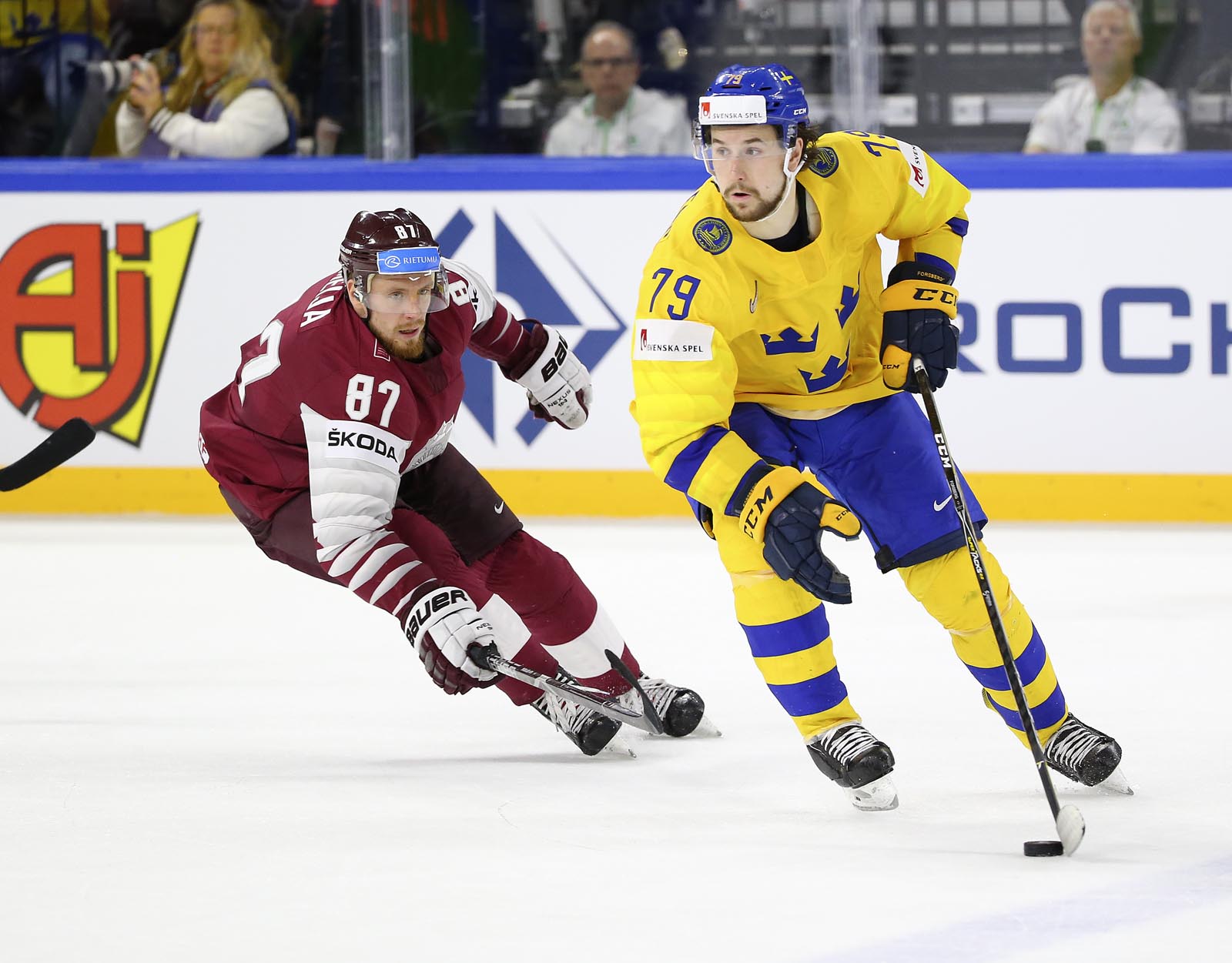 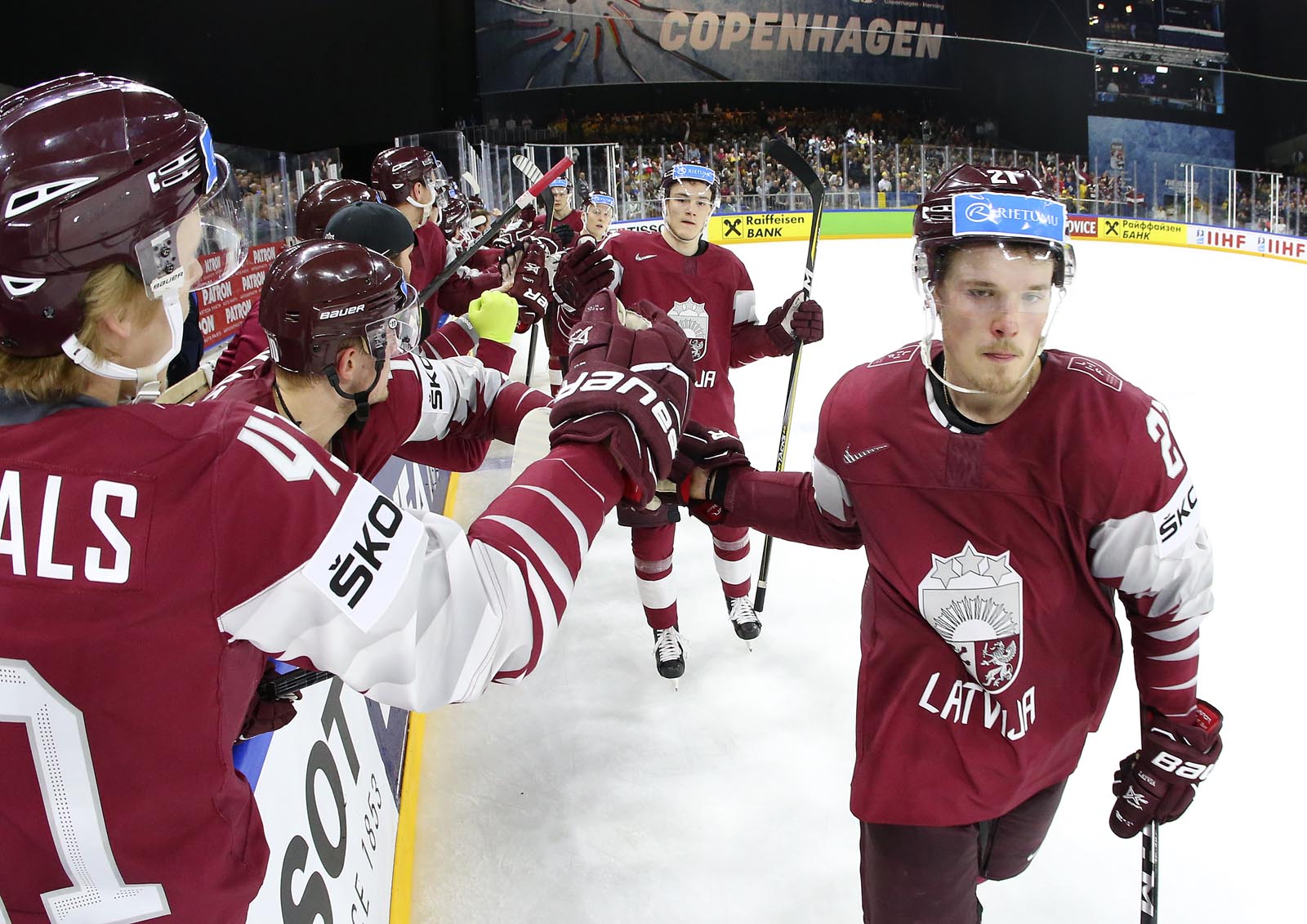 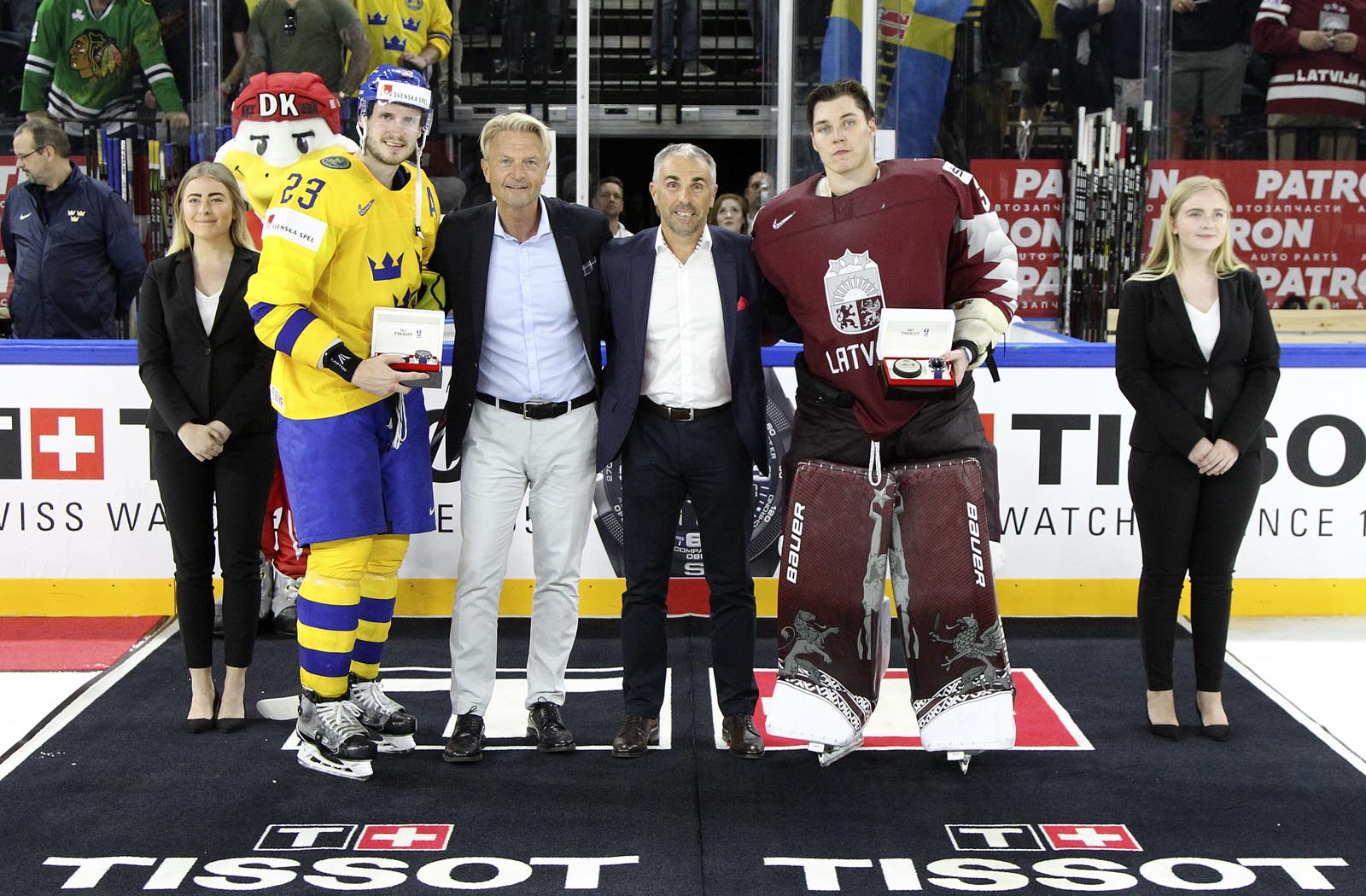 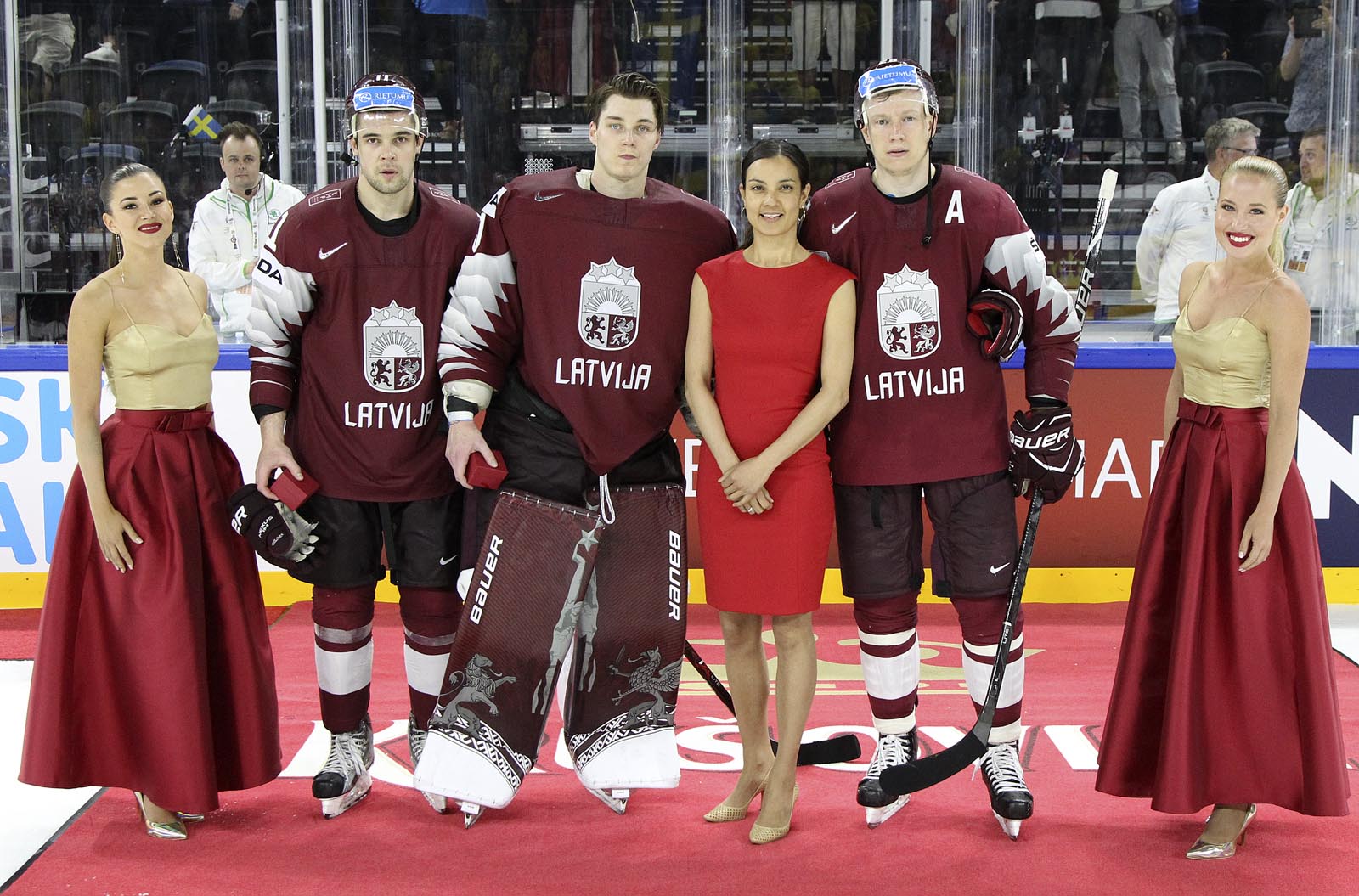 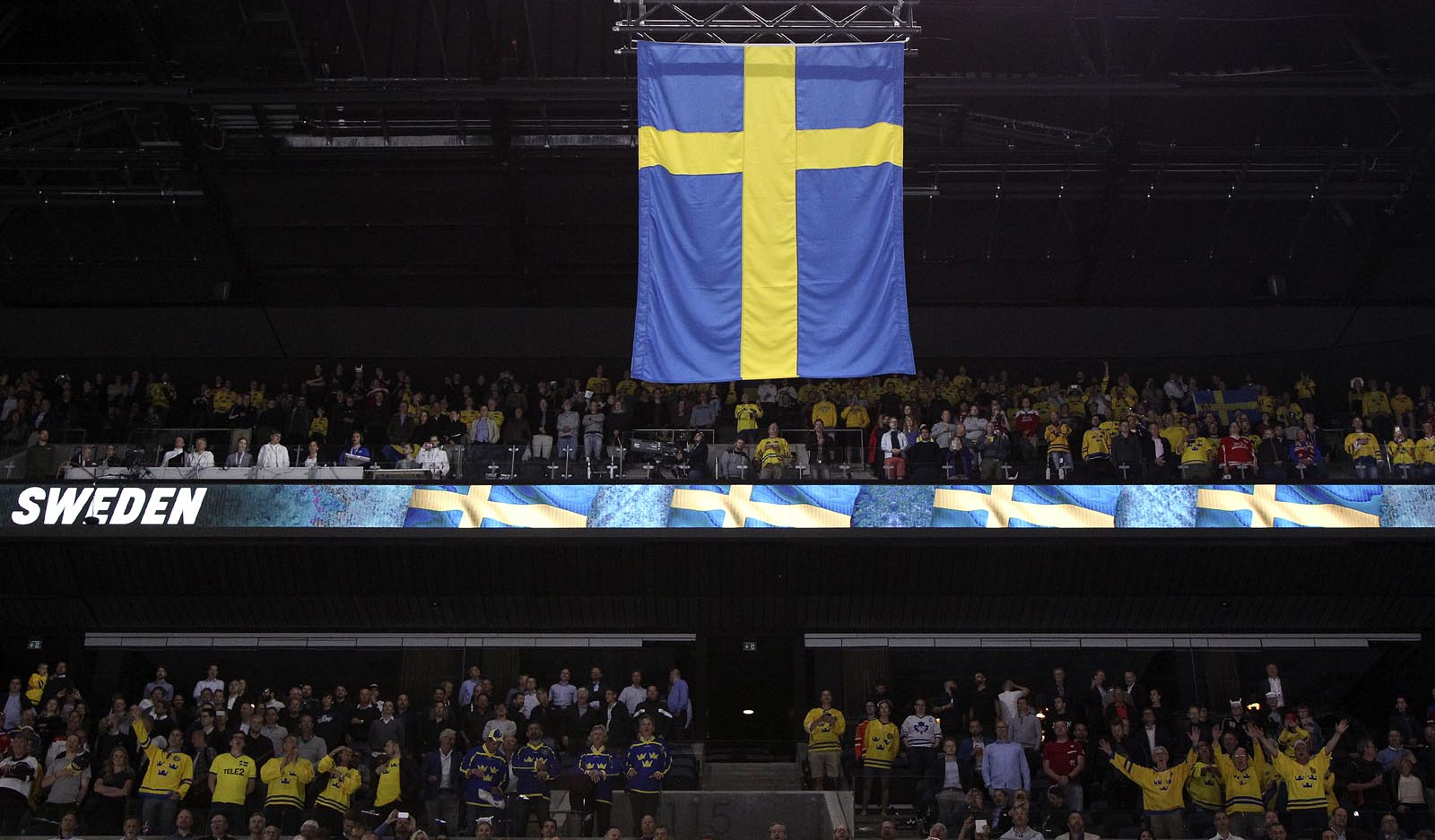