Cruise control for Canada
Canada's Pierre-Luc Dubois #18 scores on Danish goaltender Patrick Galbraith.
photo: Matt Zambonin / HHOF-IIHF Images
share
Denmark is one of Canada's favourite opponents. In five of the last seven meetings between the nations, the Canadians have hit five or more goals. Today was no exception, with Alain Vigneault's team jumping to a 3-0 lead inside nine minutes and adding two more tallies through Sam Reinhart to ease to victory by a five-goal margin.

After the feverish finish to the earlier game in Kosice, the evening meeting between Canada and Denmark was an altogether more sedate affair. Denmark’s quarter-final hopes were already long gone, while Canada was looking to climb to second in Group A and stay in a three-way battle to top this section.

And it took the Canadians just a minute to get in front in this one, with Jonathan Marchessault taking a breakaway behind the Danish net before halting abruptly and retracing his steps to confuse Patrick Galbraith as Pierre-Luc Dubois supplied the finish from close in front to open his account here in Kosice. Even if tomorrow's game against the USA was the headline attraction, Canada was not taking this one lightly.

"It's still a game," said Adam Henrique. "You can't look past it, no matter who you're playing the next day. We did a good job coming out and getting the lead, and going from there. We'll see what we need to be better in and get ready for tomorrow. It's a huge game for us. It will be more of our style, a little more familiar, so everyone will have to play their best."
World Men
Canada vs. Denmark - 2019 IIHF Ice Hockey World Championship
Canada jumped to a 3-0 lead inside nine minutes and added two more tallies through Sam Reinhart to ease to victory by a five-goal margin against Denmark.
CAN DEN 20 MAY 2019
Denmark tried to stage a recovery but struggled to really test Carter Hart in the Canadian net. The next scoring came in the seventh minute when Kyle Turris brought play out of the corner to feed Jared McCann between the hash marks. 2-0 Canada, and it felt like the Danes could be in for a long evening.

Marchessault added to his assist on the first goal by scoring the third. Once again, Canada was able to move the puck around the Danish zone almost at will and Damon Severson thumped in shot from the centre point that the Vegas forward was able to knock down into Galbraith’s net. A video review confirmed that the play was good and Canada led 3-0. The puck was in the net a fourth time late in the frame when Anthony Cirelli kept pounding away in front of Galbraith, but a video review showed that the forward kicked it over the line. The verdict was a relief for Danish forward Mathias From, who inadvertently stretched his own goalie with a misguided attempt to clear behind his own net.

Marchessault has impressed in the current tournament but the Golden Knights man is aware that the hard work is only just beginning. "The games are going to start to be more intense and physical, and we have to be ready for that," he said. "I think we've gotten better, for sure. We've adapted to the big ice, and we're playing smart hockey. There's no secret to hockey. You keep it simple and work hard, you'll find success."

Henrique also felt that the team was coming into its best form. "We've improved everywhere in the last two weeks," he added. "Coming to the big ice as a team is a big step, but every day we've gotten better in all areas. We've also been sticking with our lines, so the guys have found some chemistry. Power plays and penalty kill have been good. We're solid five on five. We've cleaned up a lot of areas we've needed to."

The second period began with another reprieve for the Scandinavians. Anthony Mantha fired into the net but was denied his eighth goal of the tournament due to a penalty called on team-mate Turris in the build-up.

Then came the best spell of the game for Denmark. A power play saw Peter Regin clip the outside of Hart’s post before another Canadian penalty produced a 28-second stint of 5-on-3. However, there was no way through the well-drilled PK and the next goal went to Reinhart when he used Jesper Jensen Aabo as a screen to rip a wrister beyond the goalie and make it 4-0.

The third period saw the video switched on again to establish whether Reinhart’s stick was high when he redirected a Phillippe Myers point shot. The verdict went Canada’s way and the 23-year-old Sabres man had his second of the game.

With 10 minutes left and the game already settled, Vigneault sent understudy goalie Mackenzie Blackwood into the game for his first taste of World Championship action. The 22-year-old dealt with everything he faced as Canada blanked Denmark.
Canada vs. Denmark - 2019 IIHF Ice Hockey World Championship 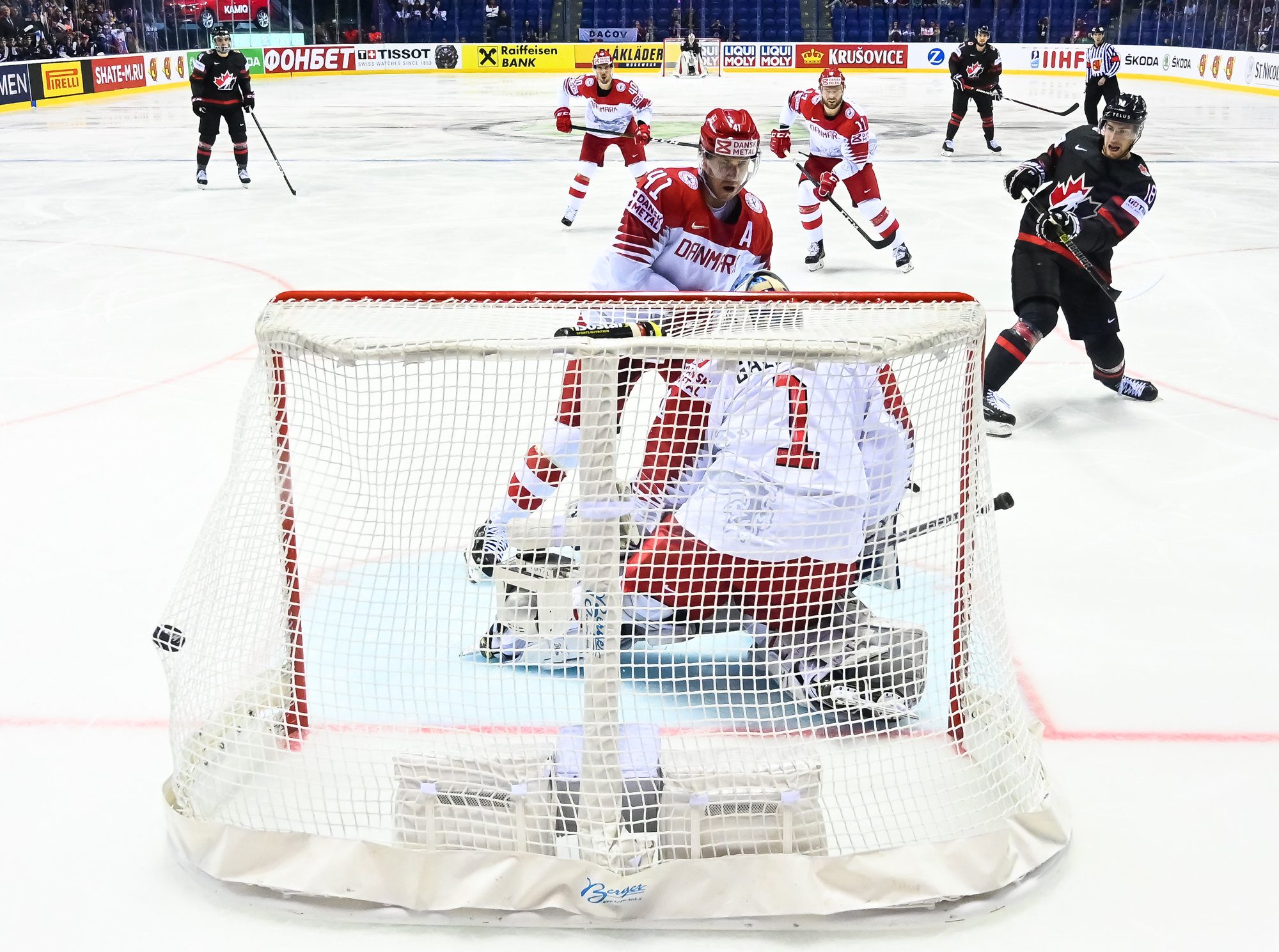 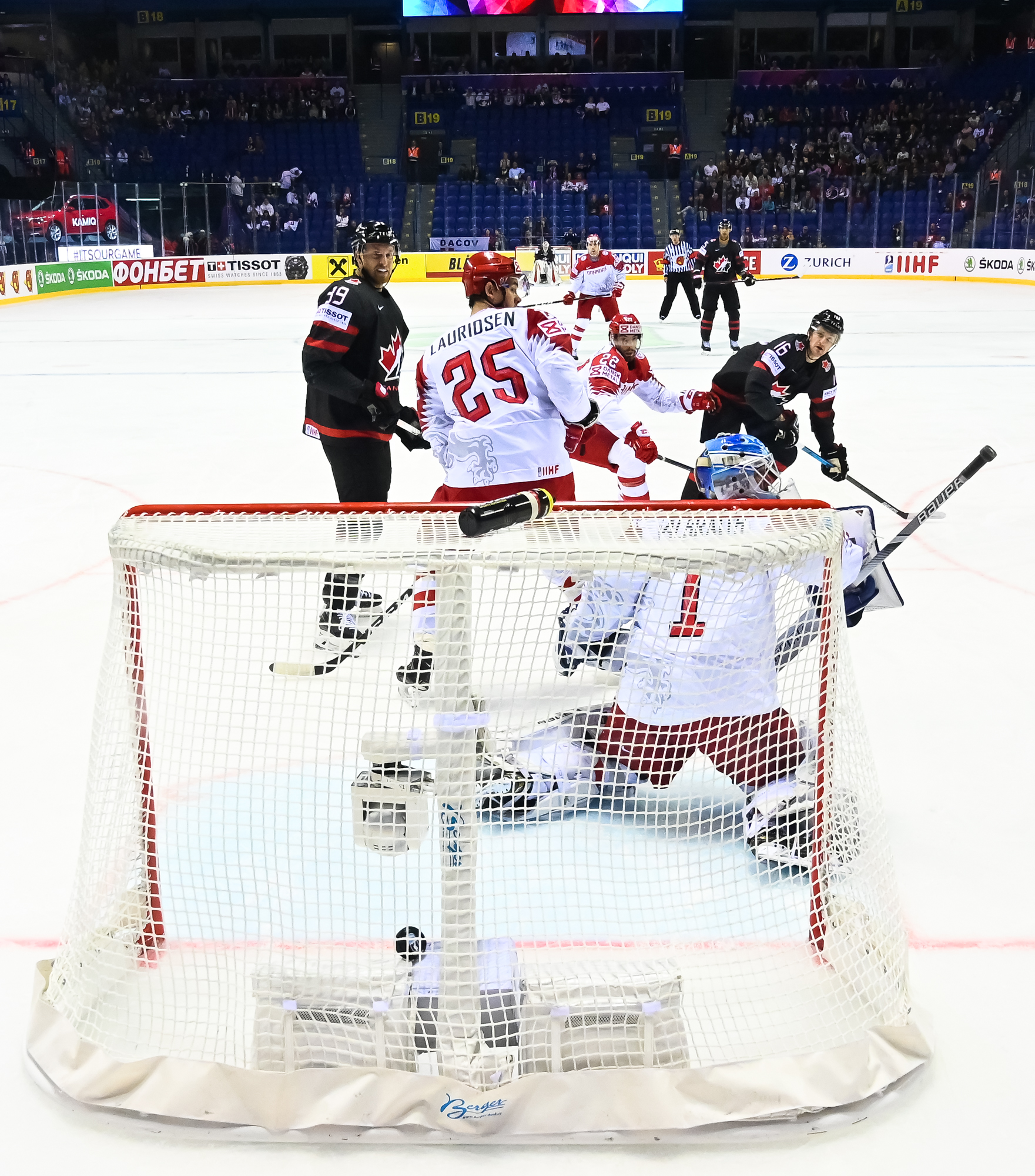 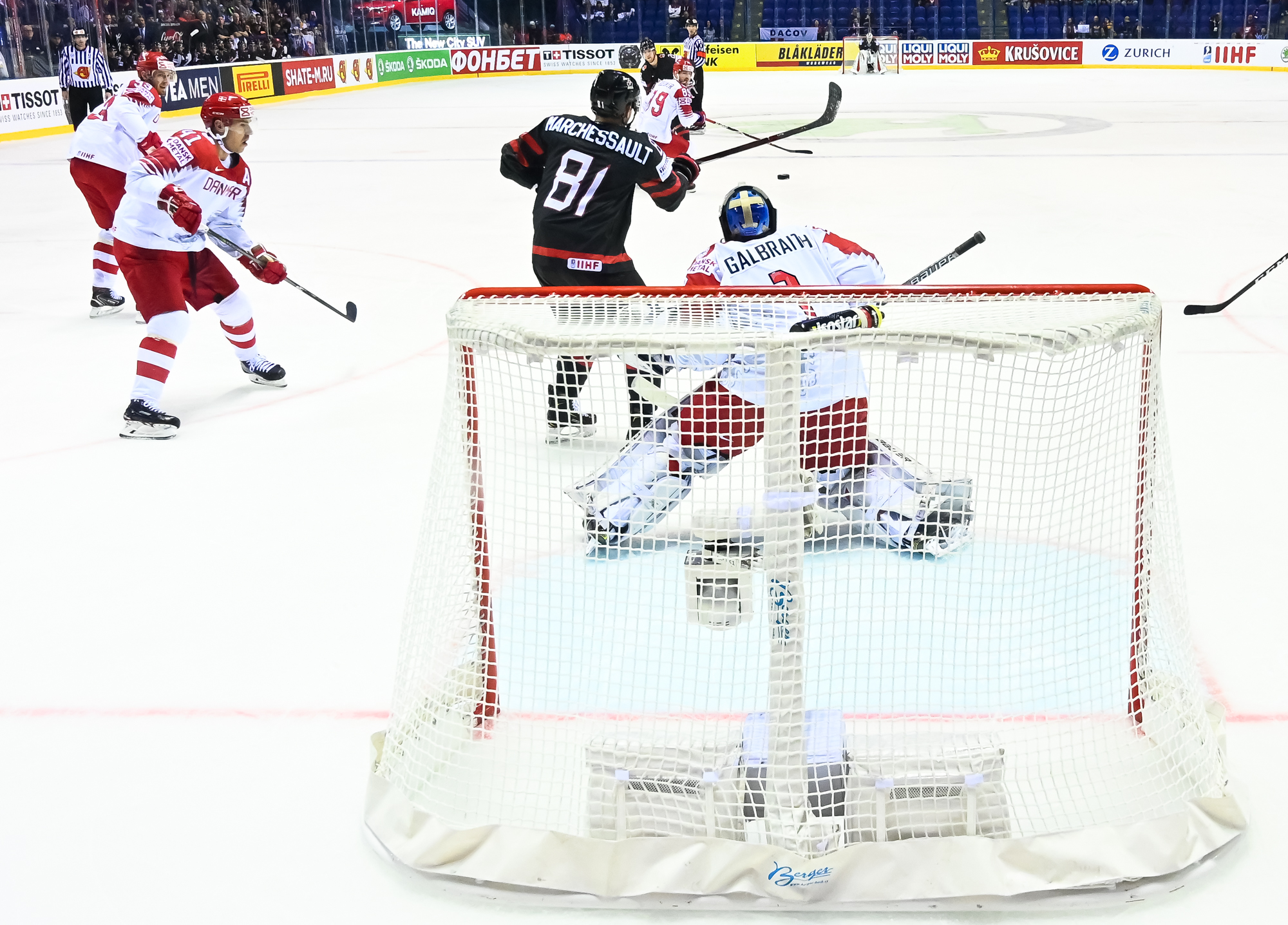 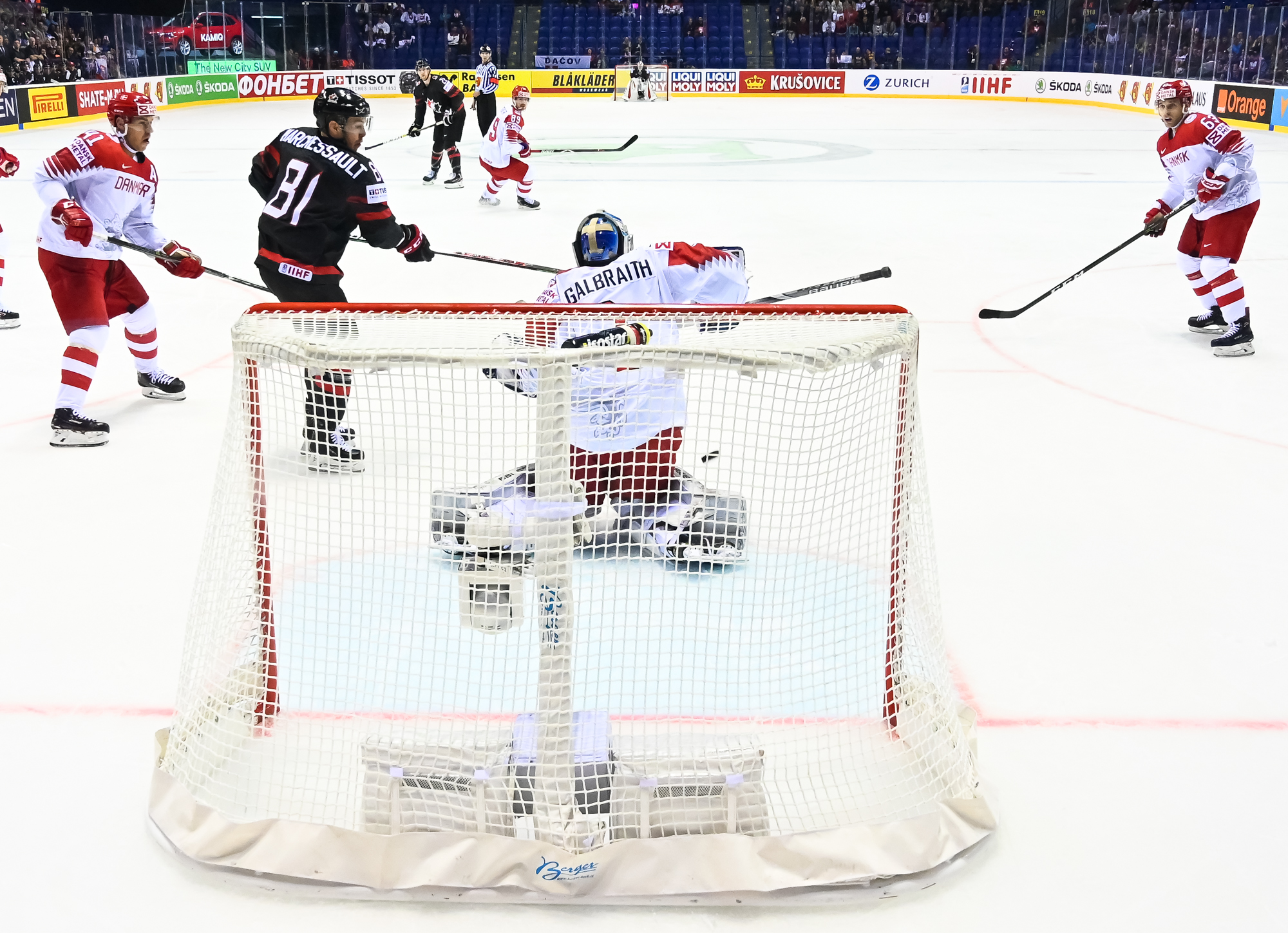 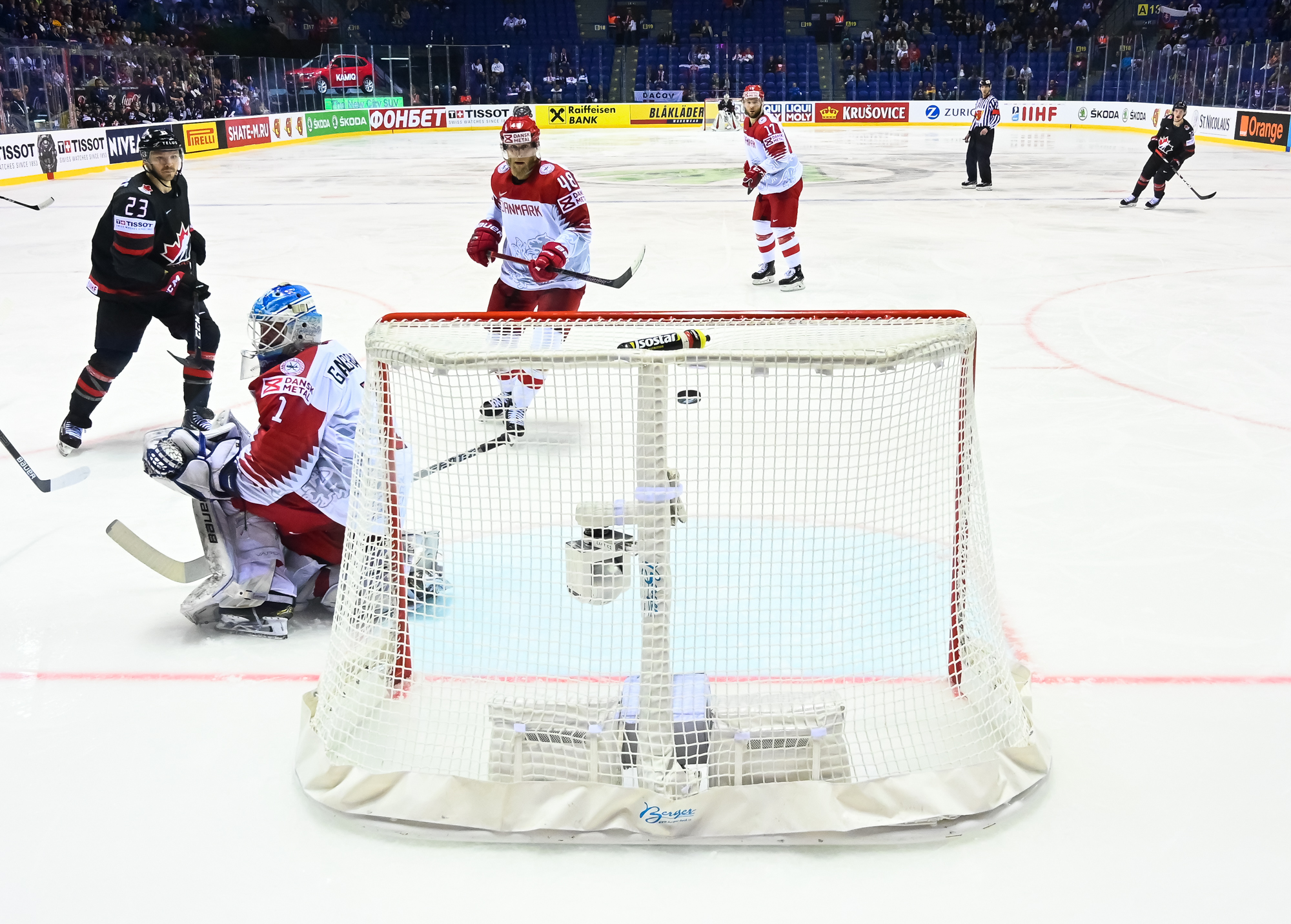 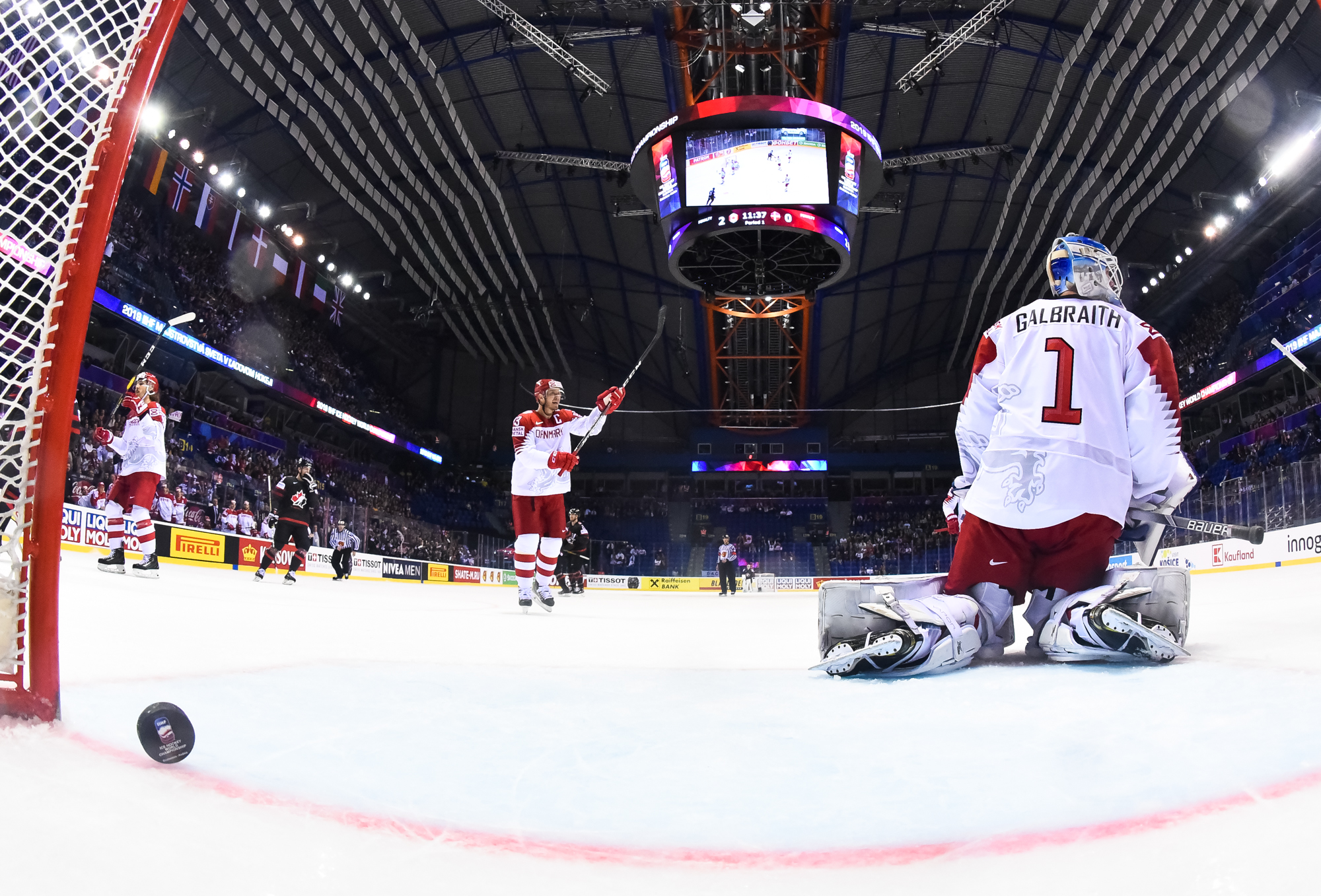 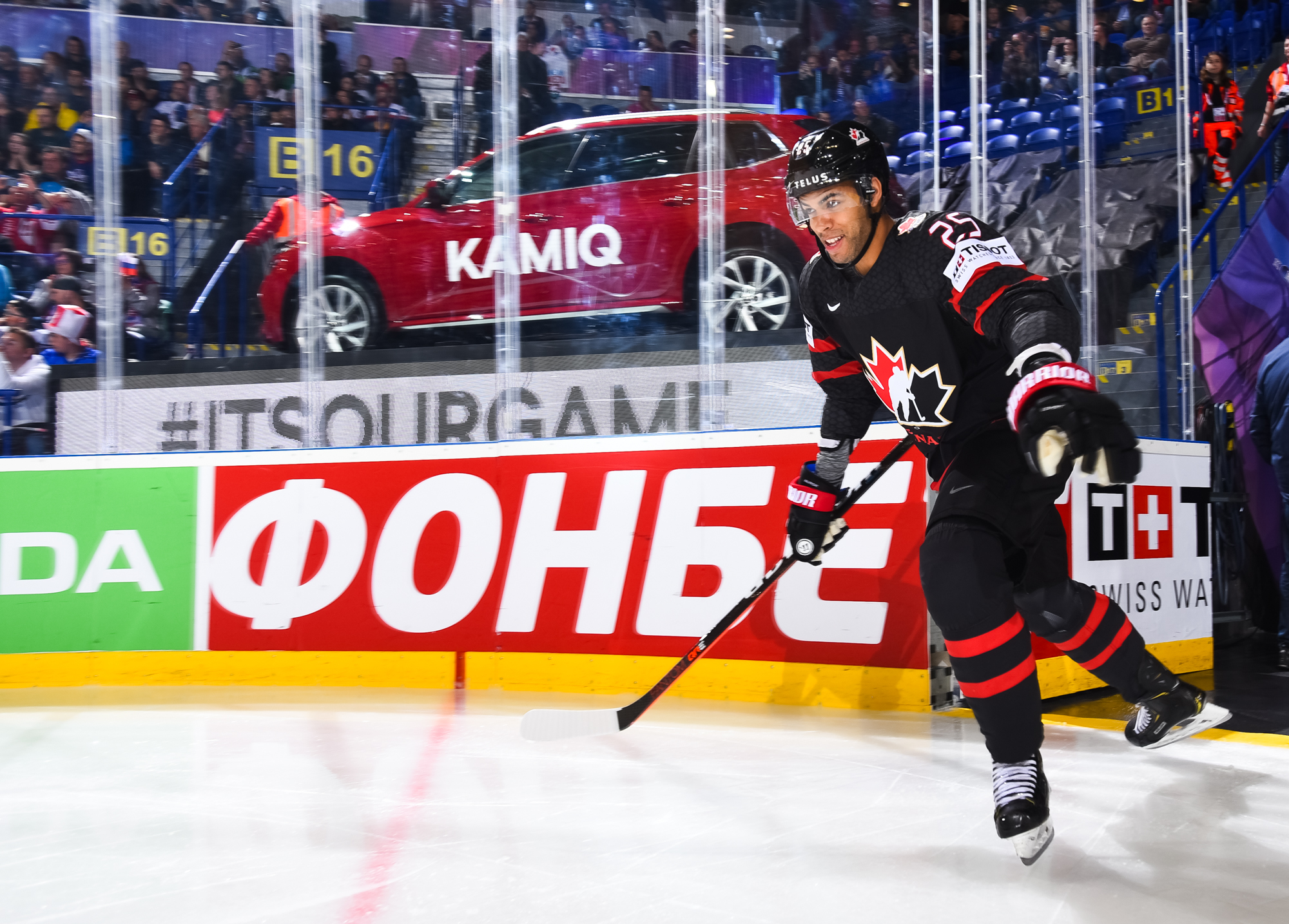 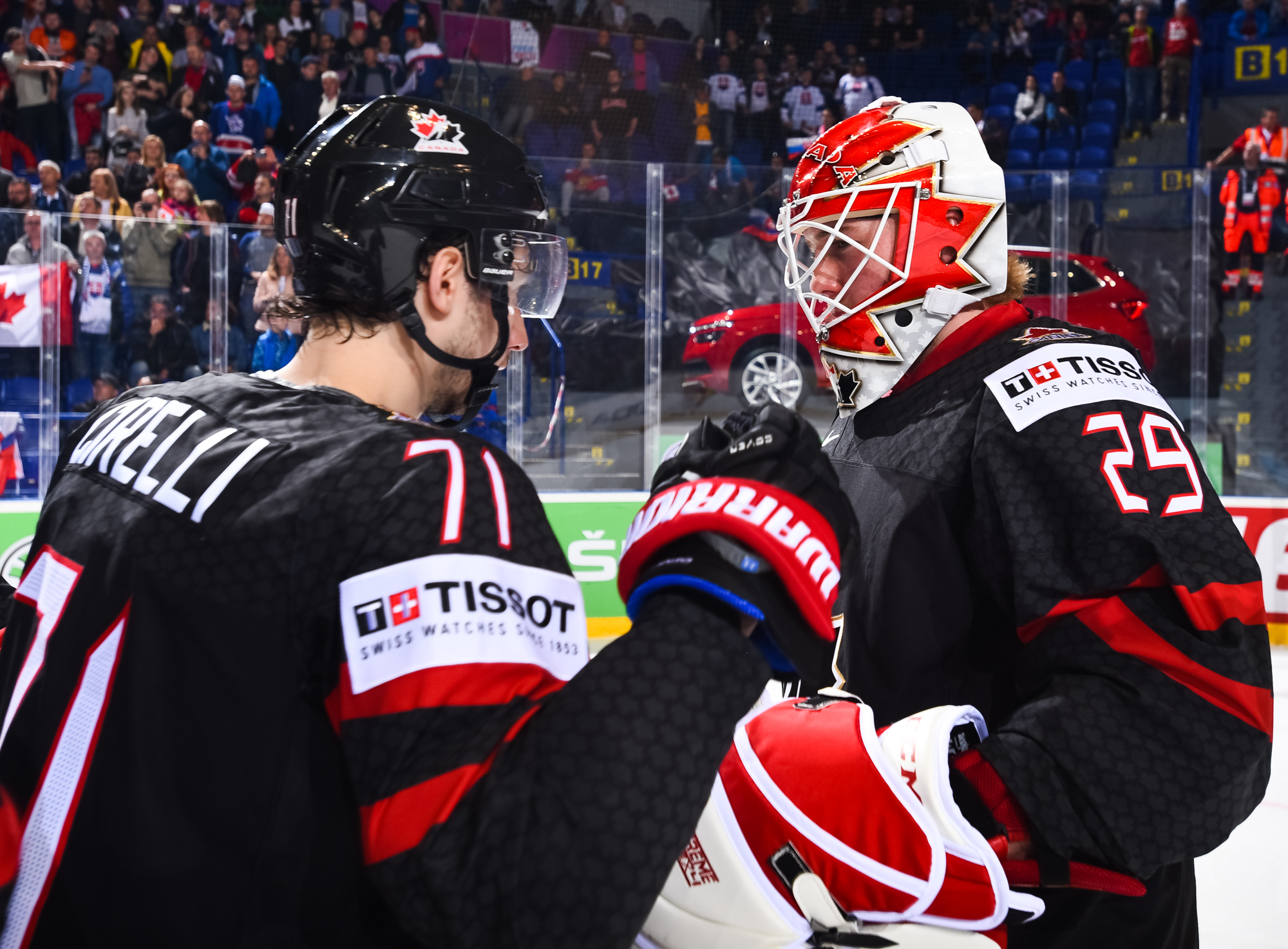 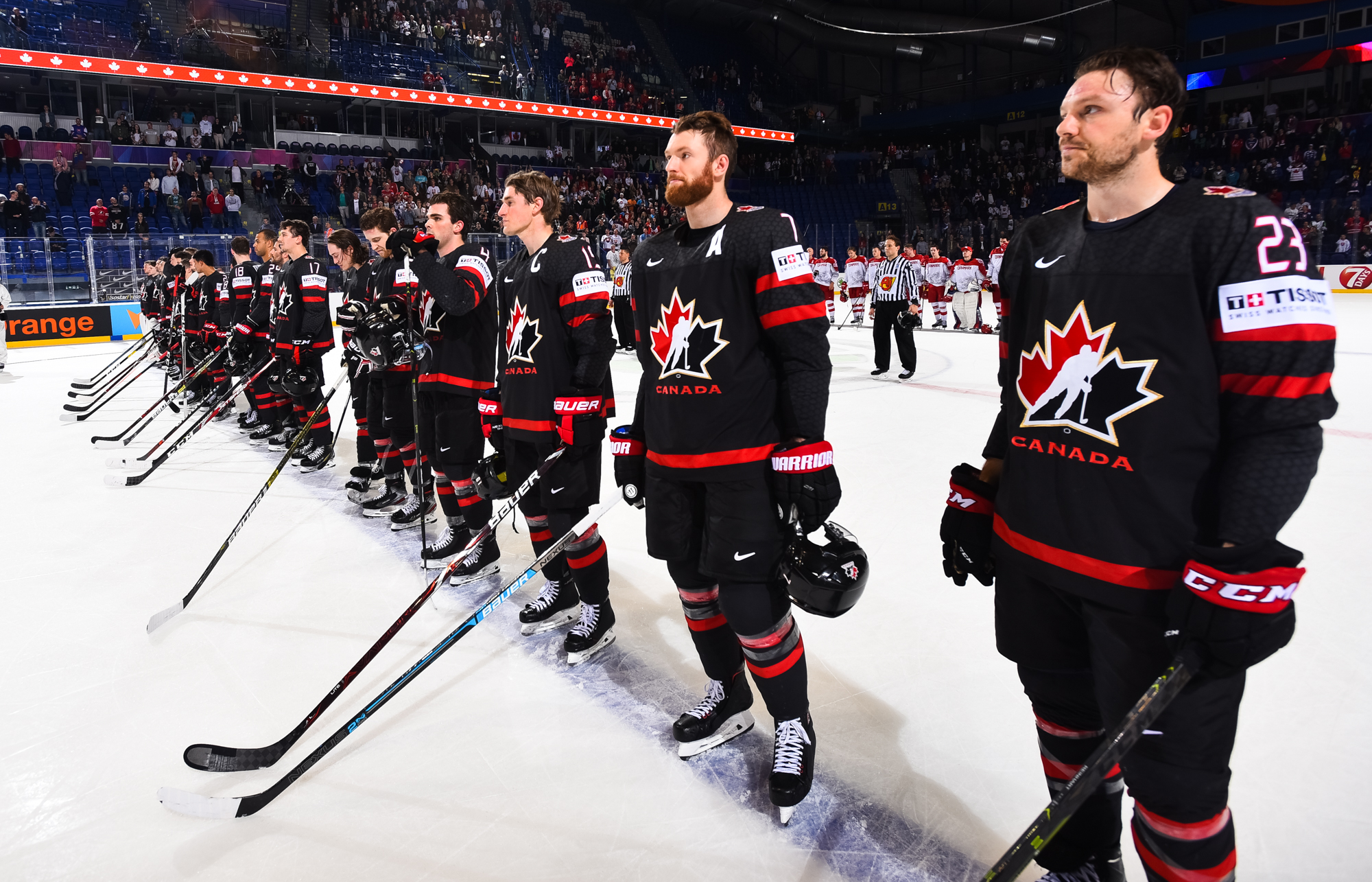 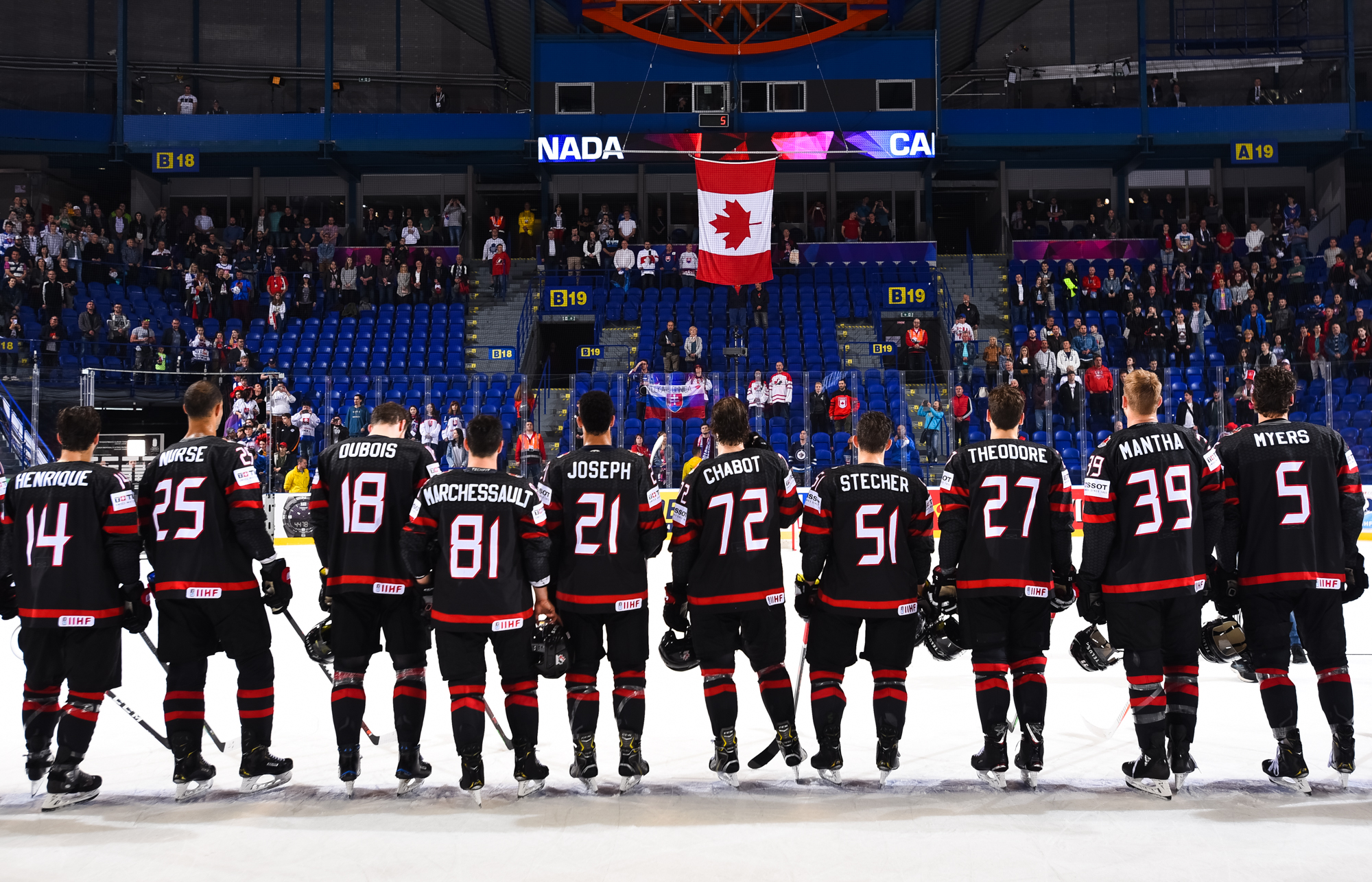 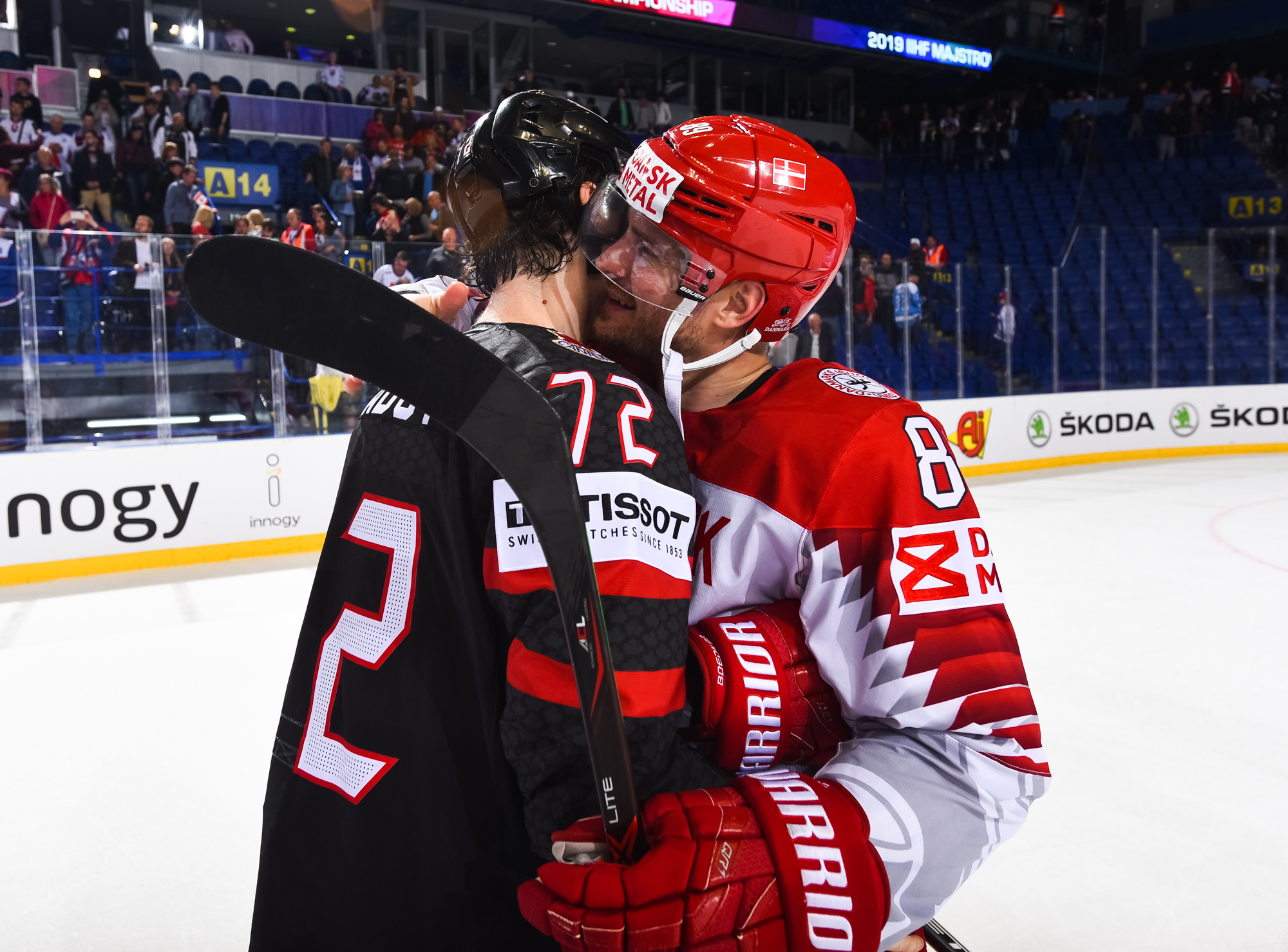 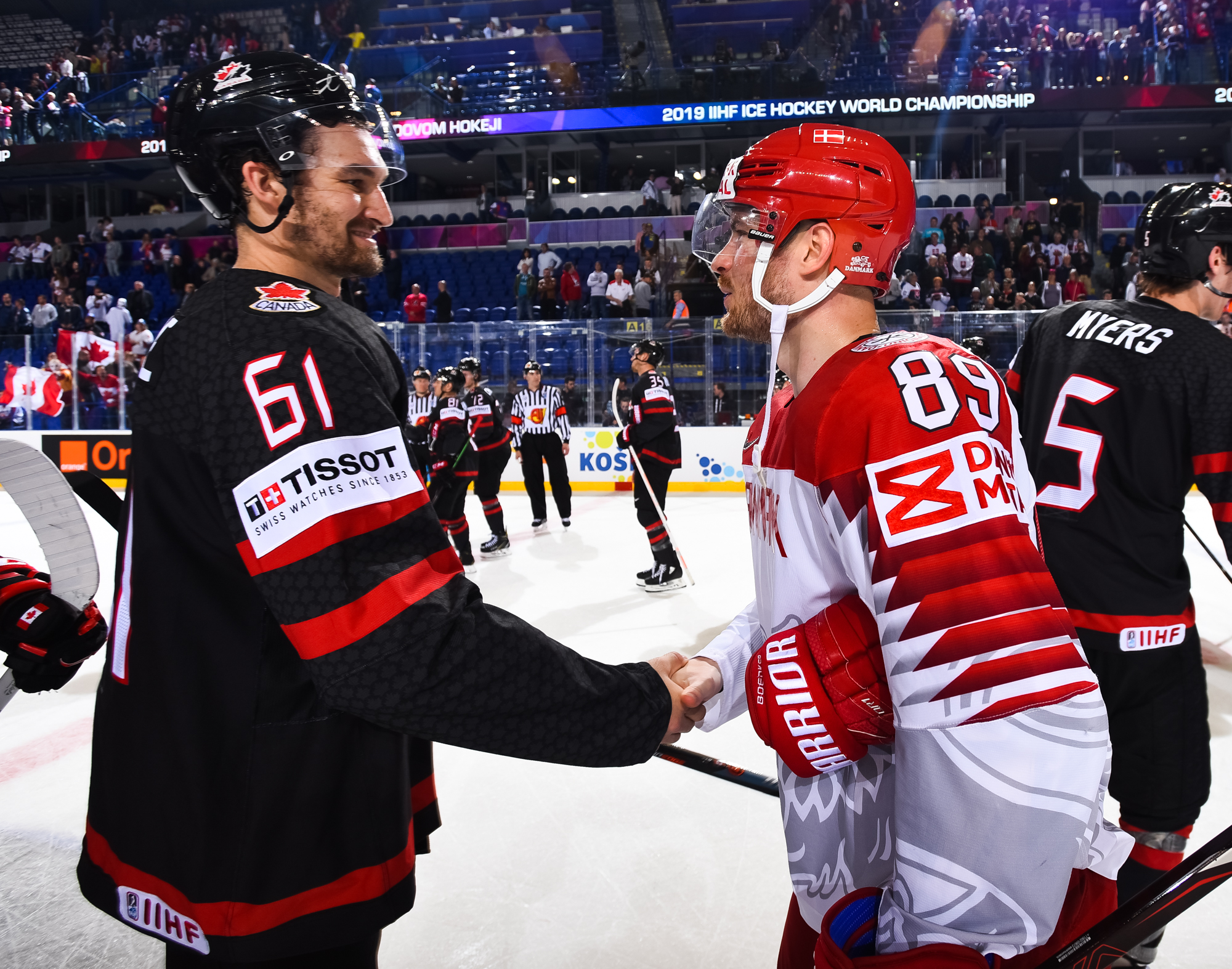 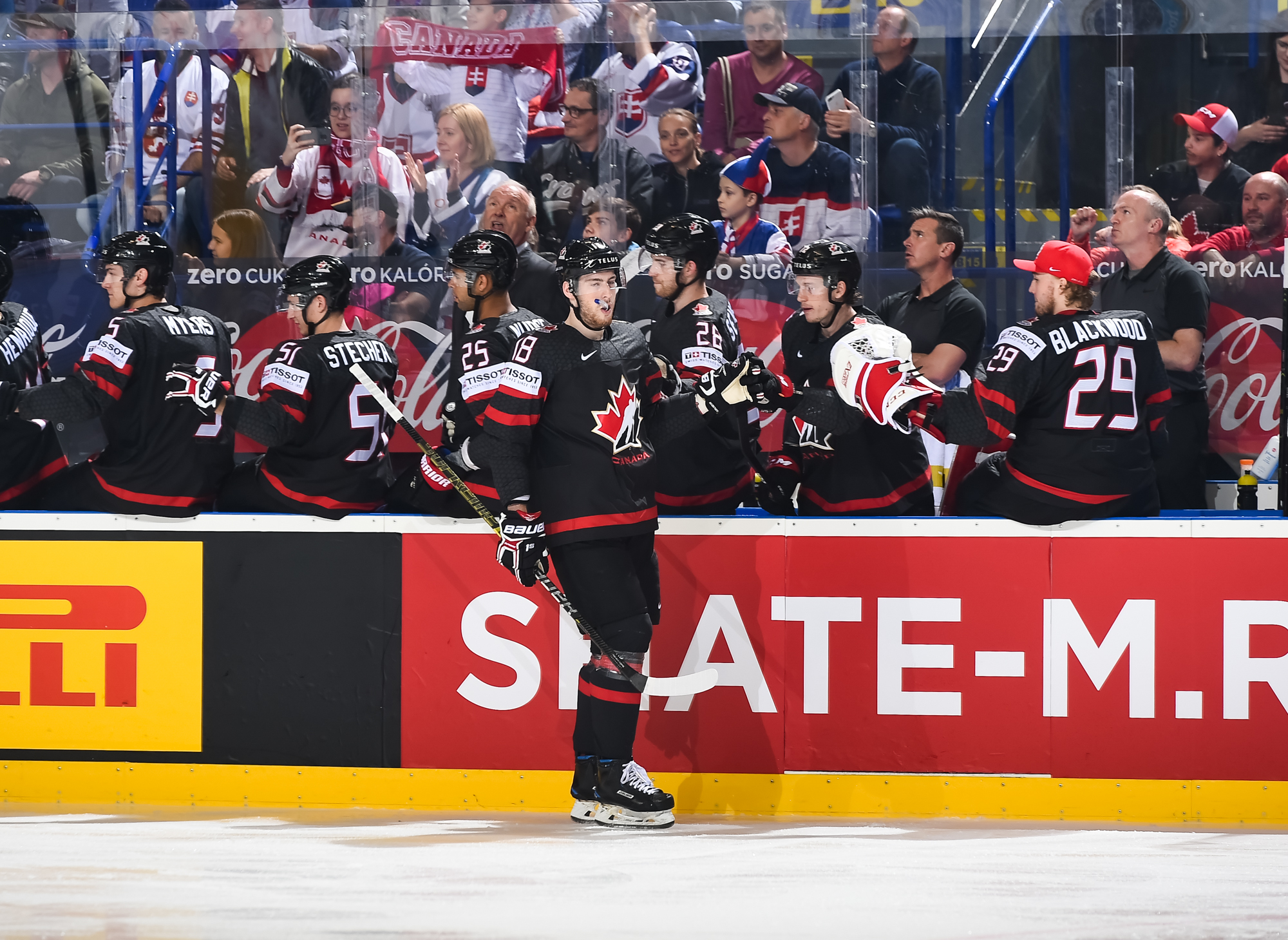 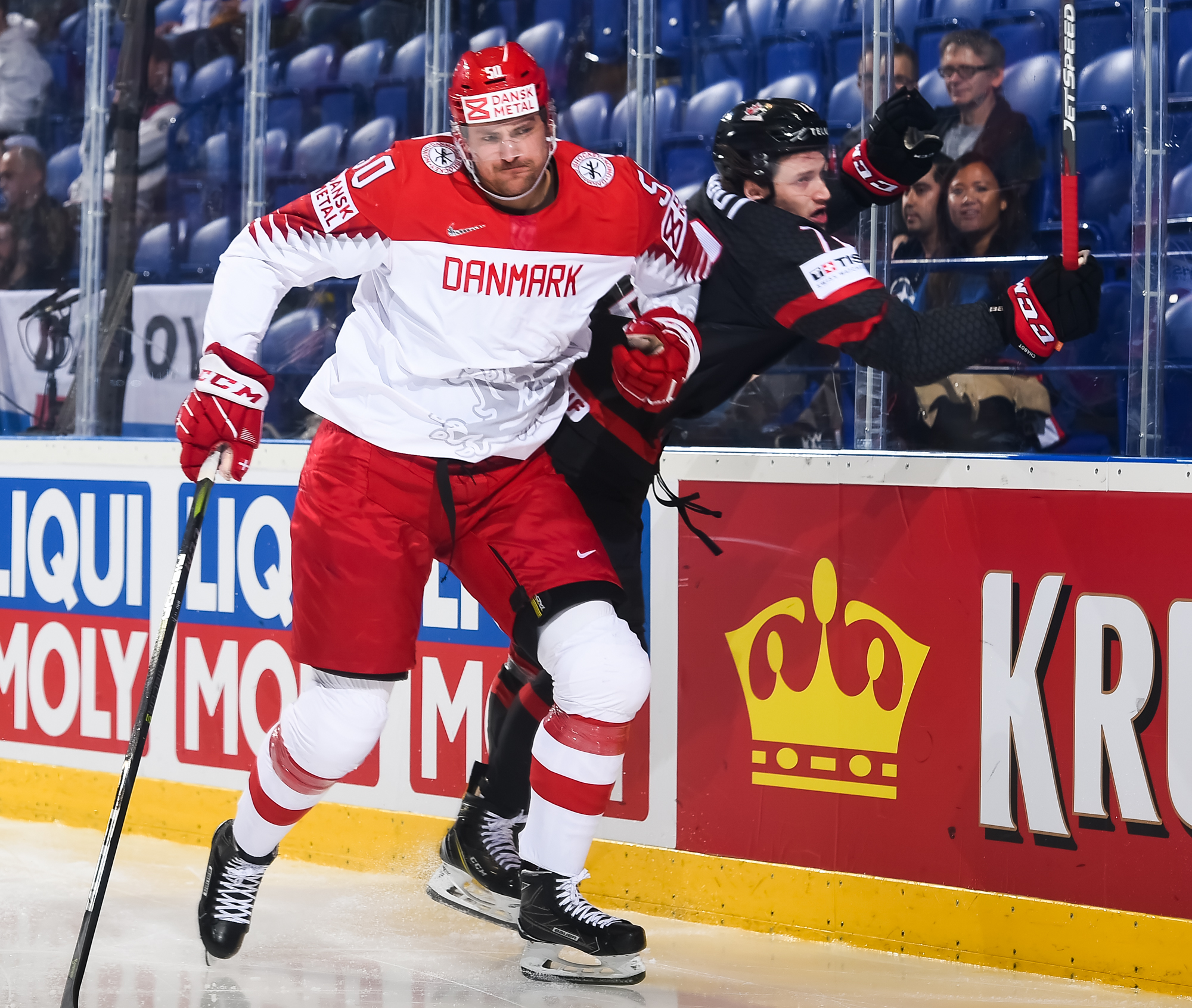 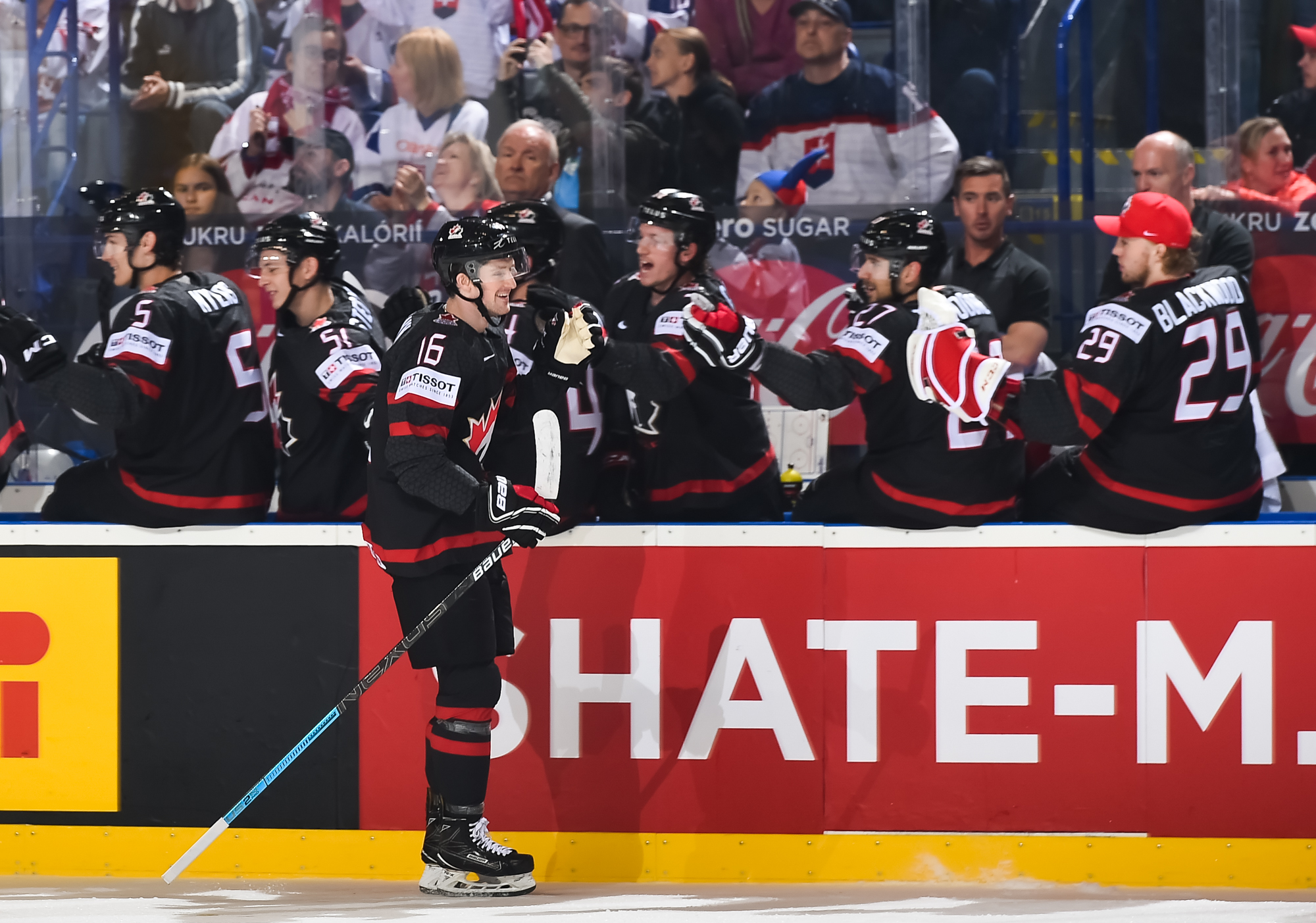 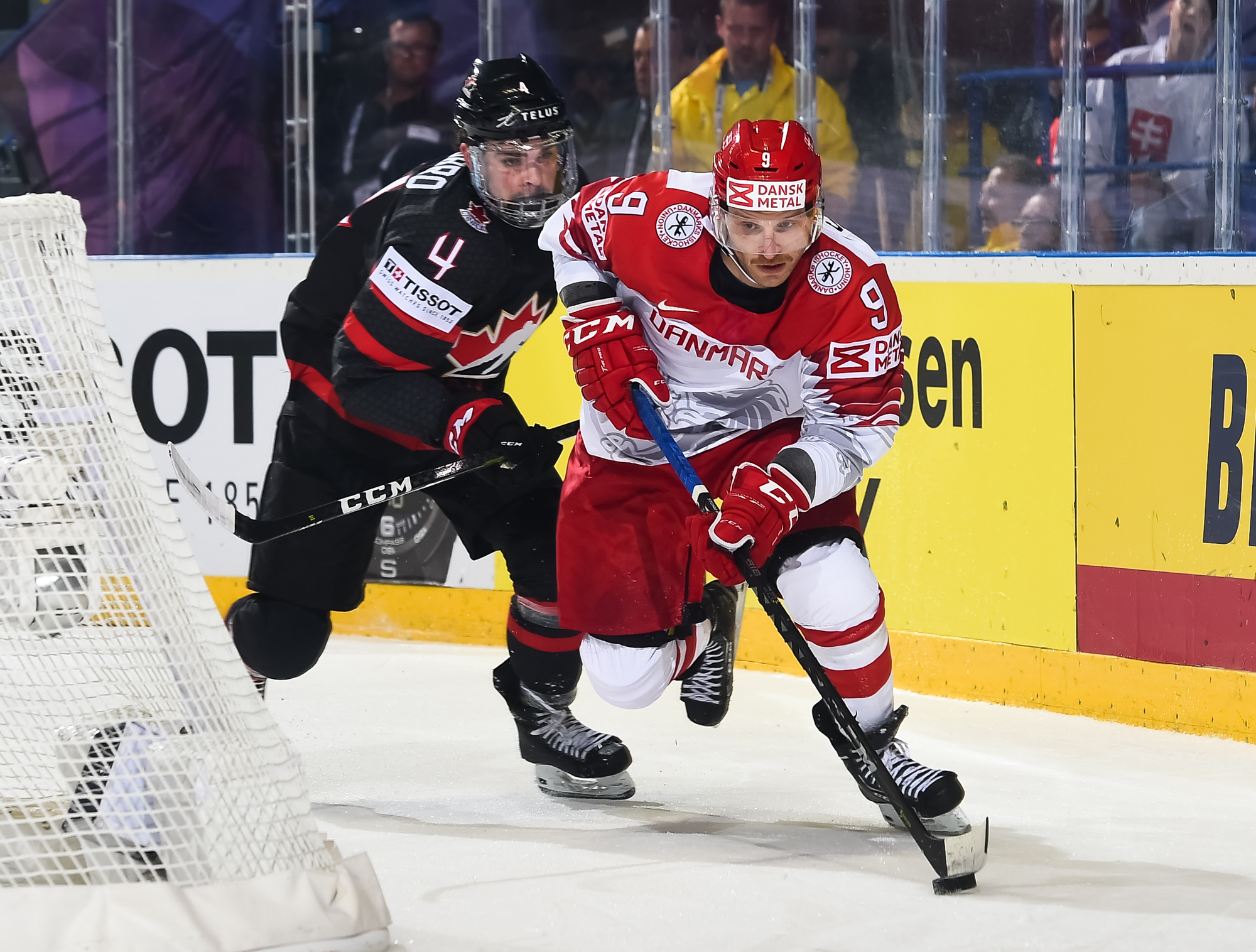 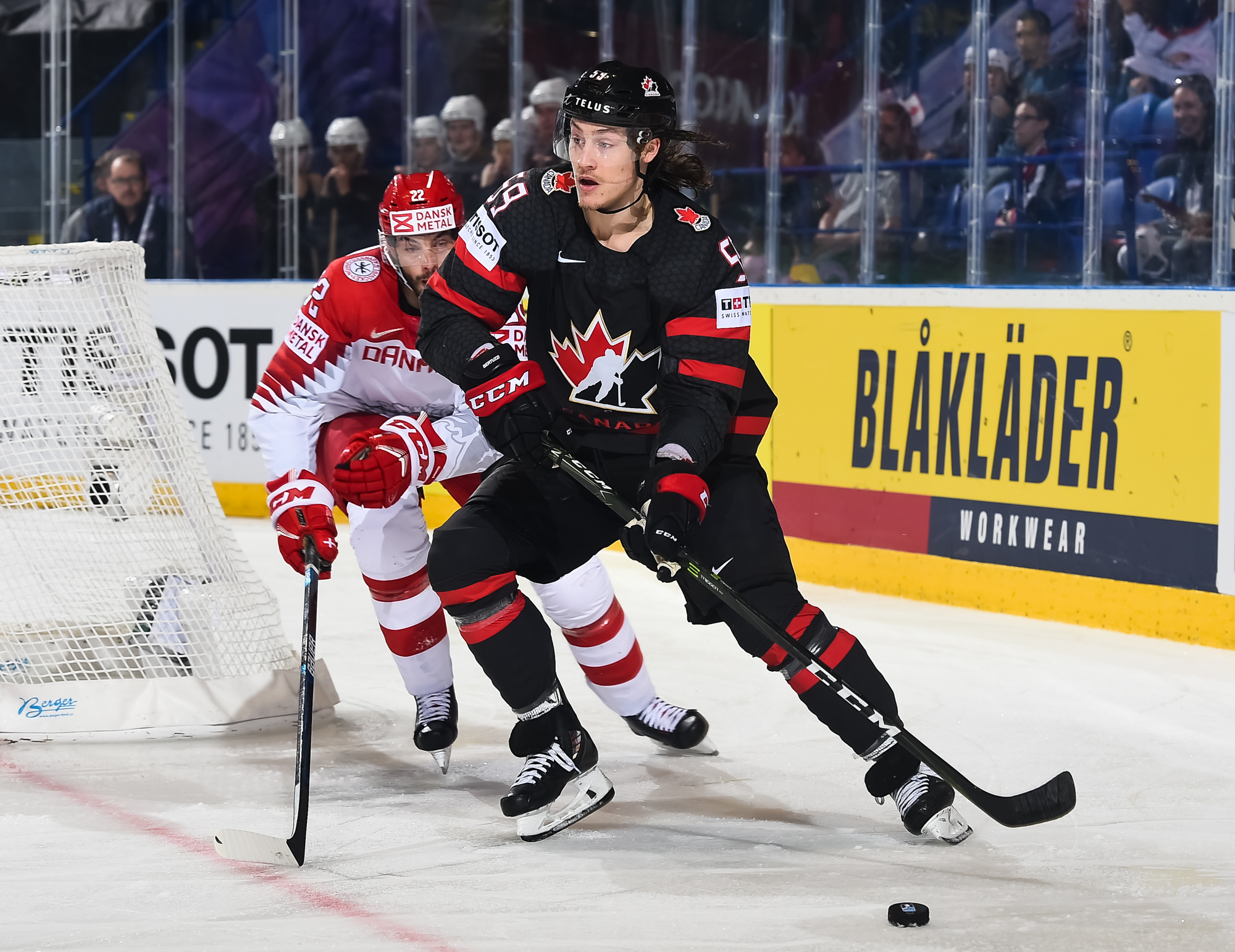 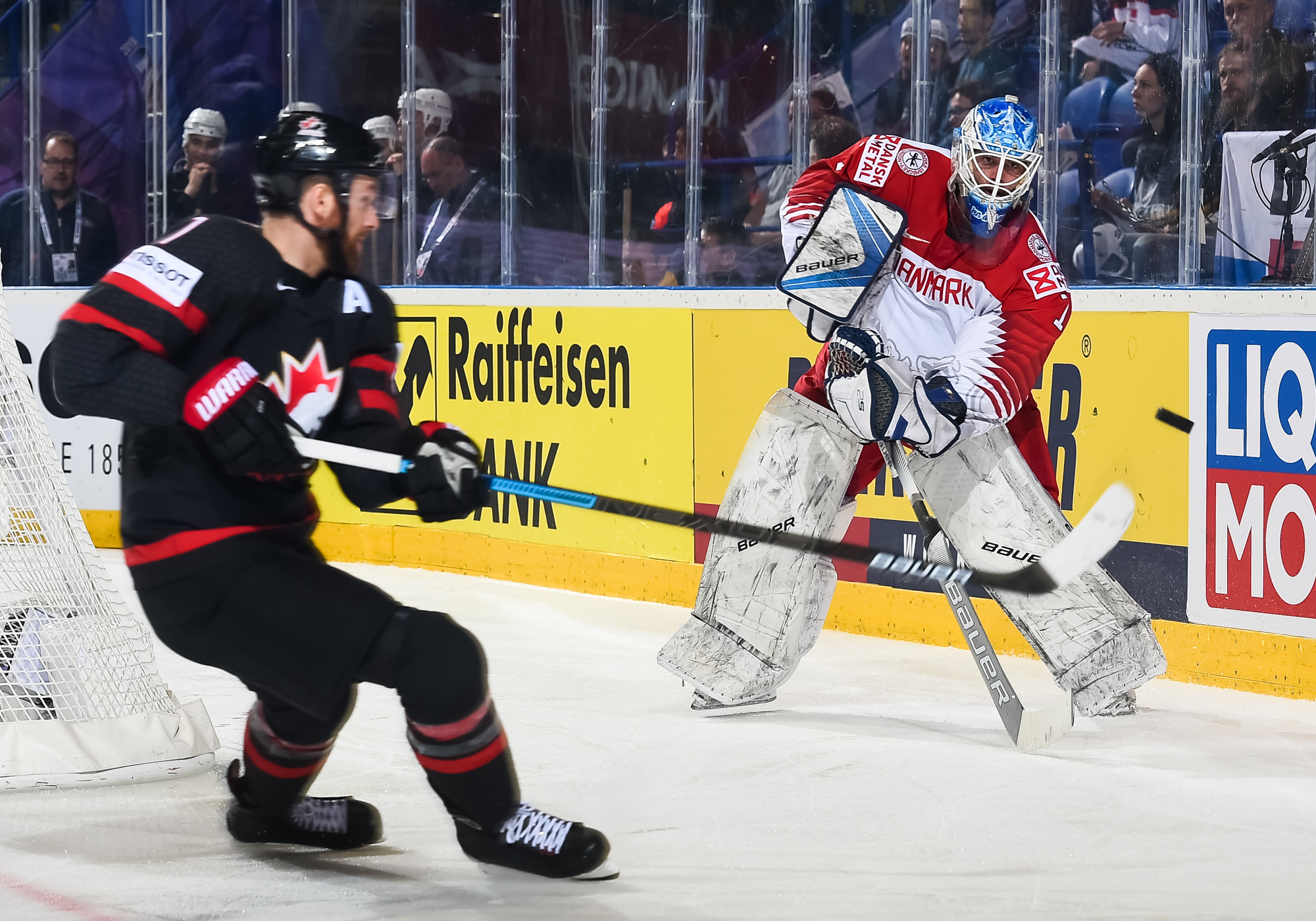 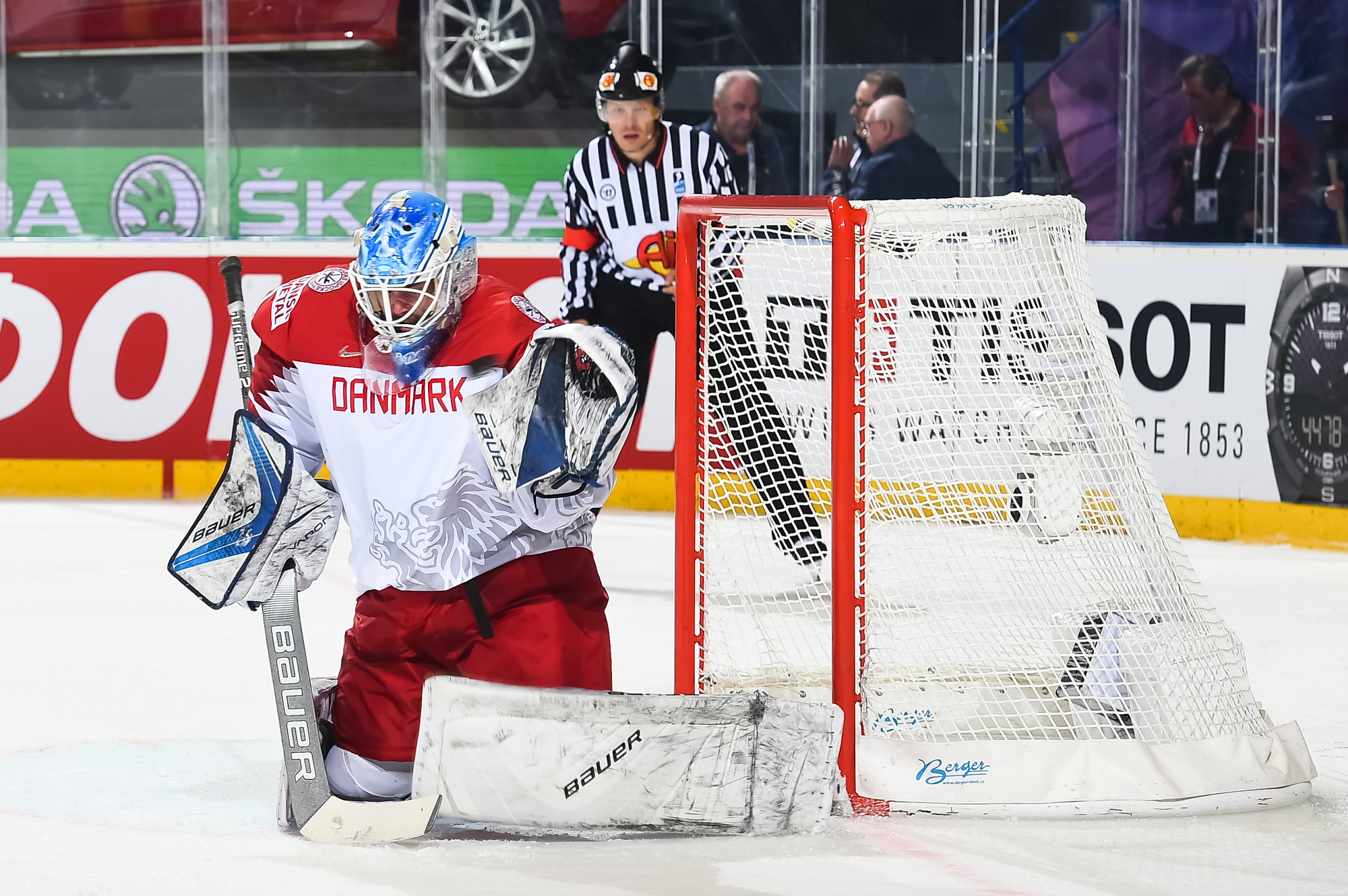 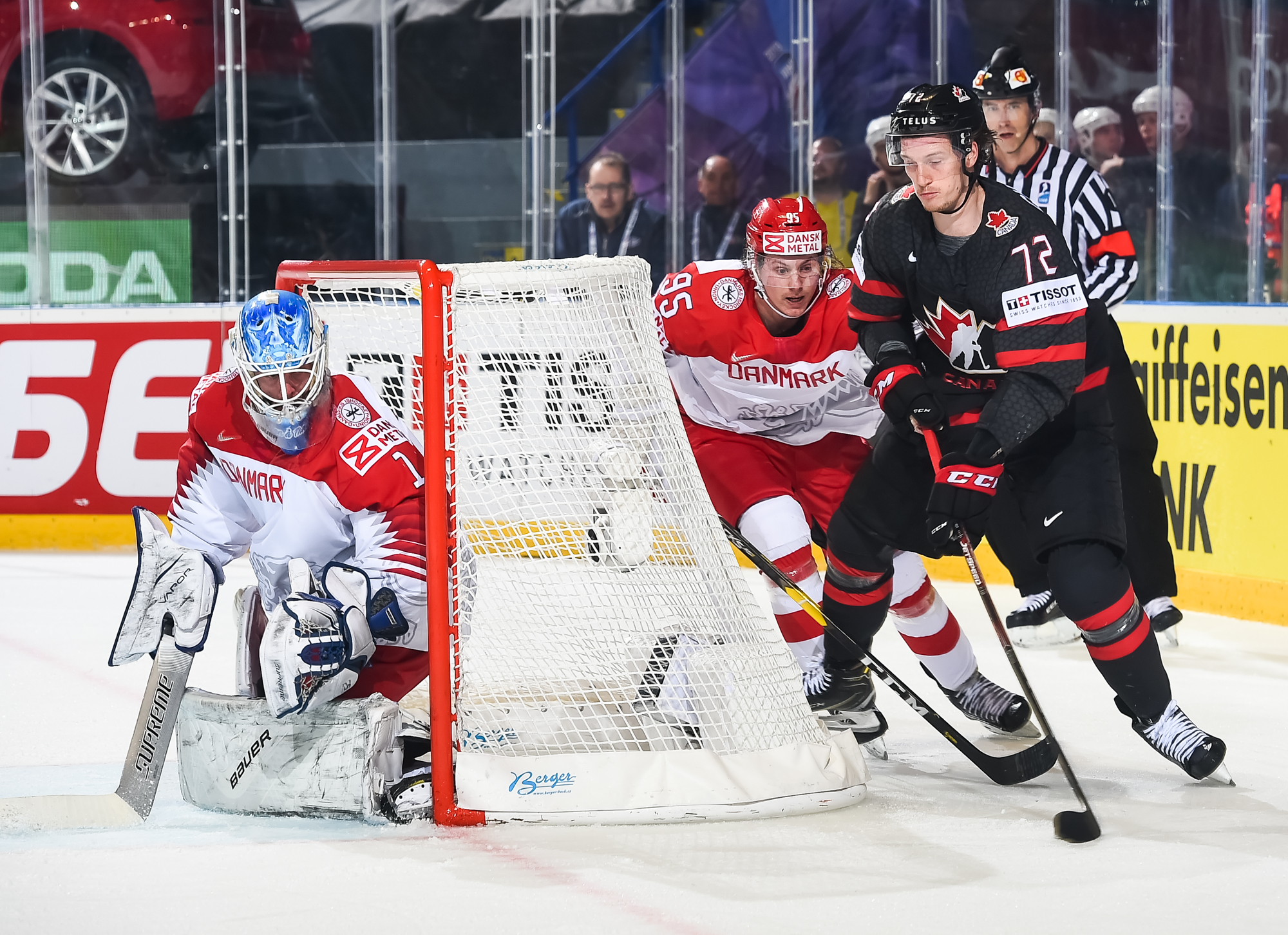 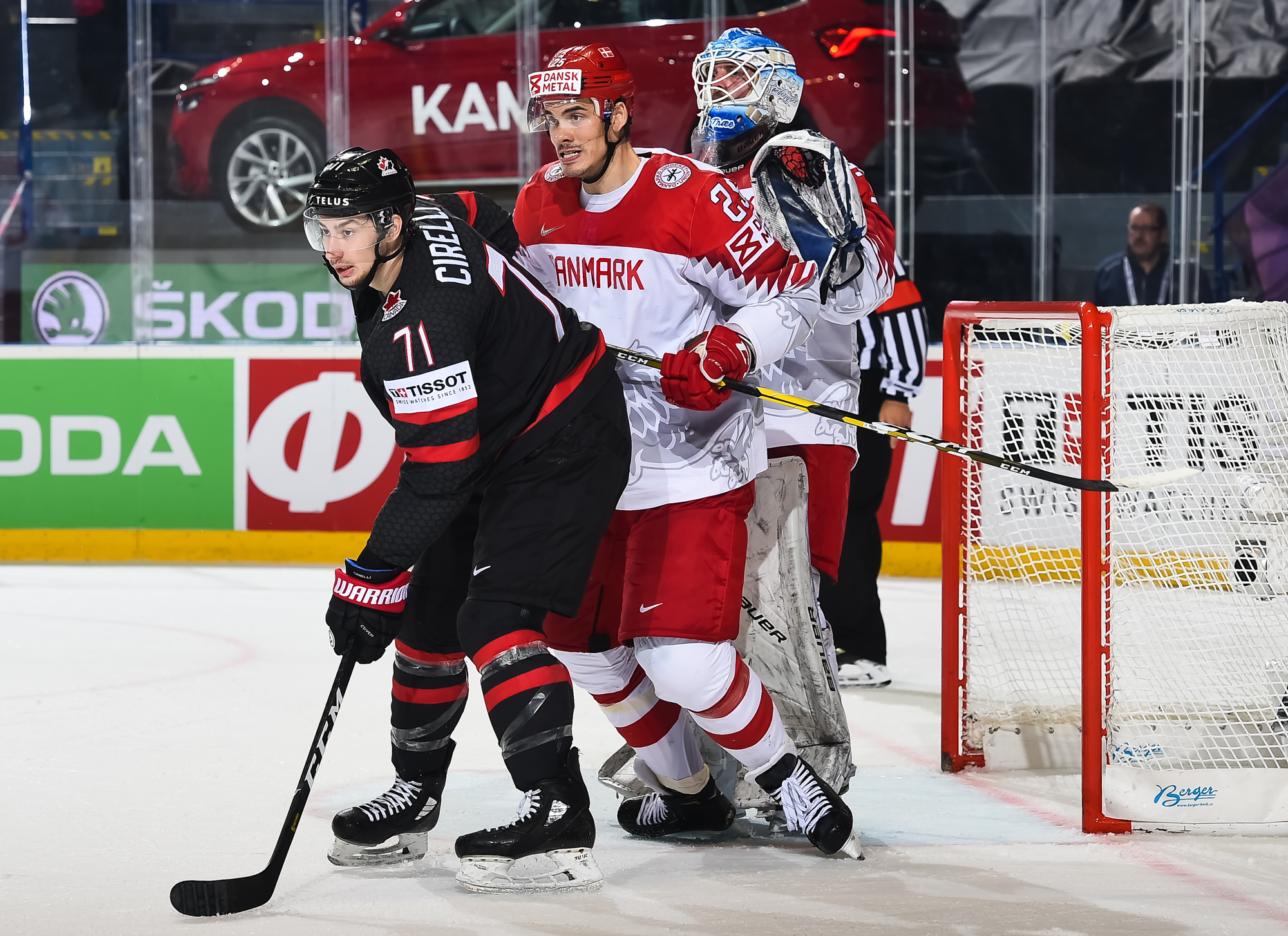 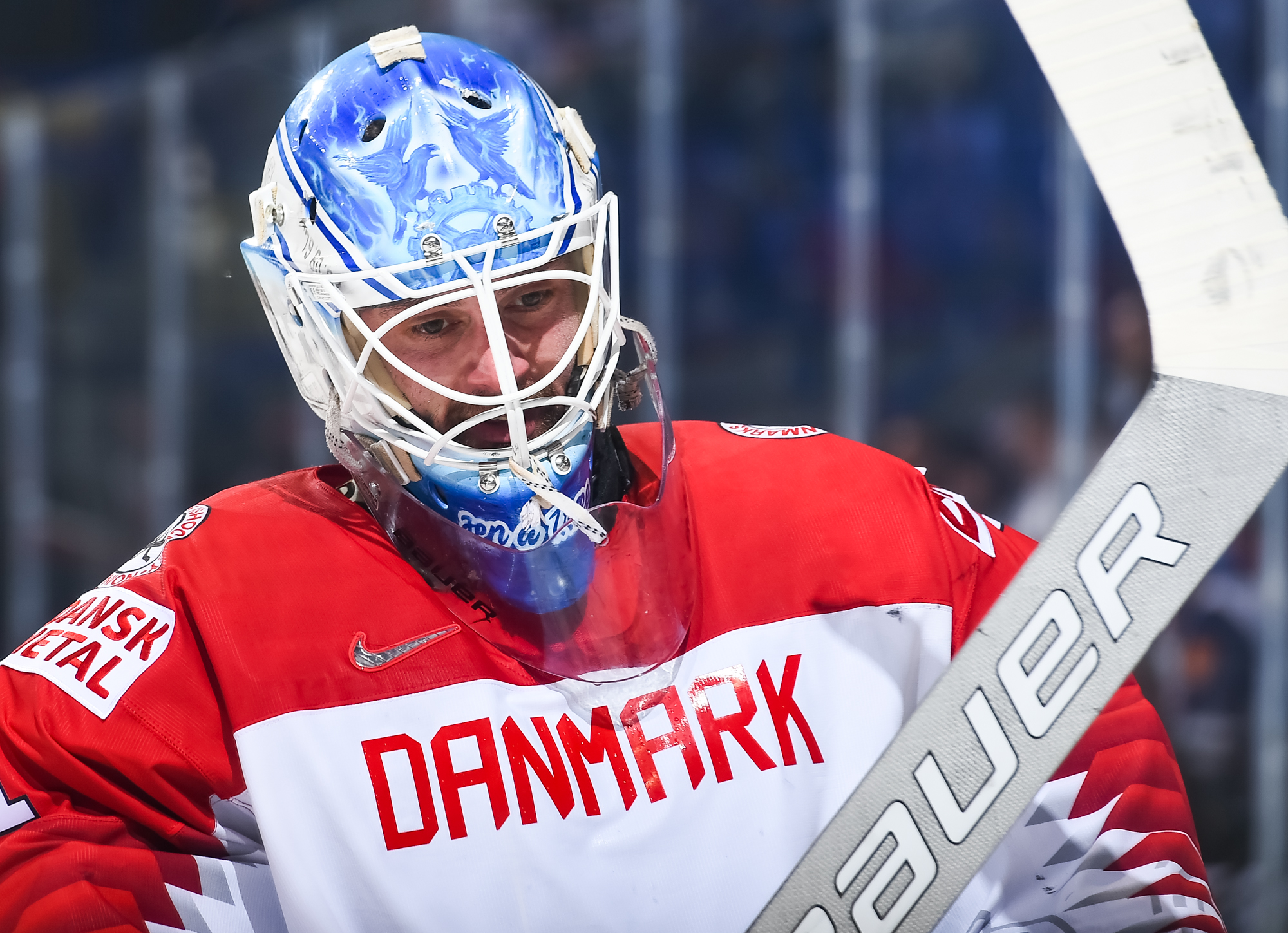 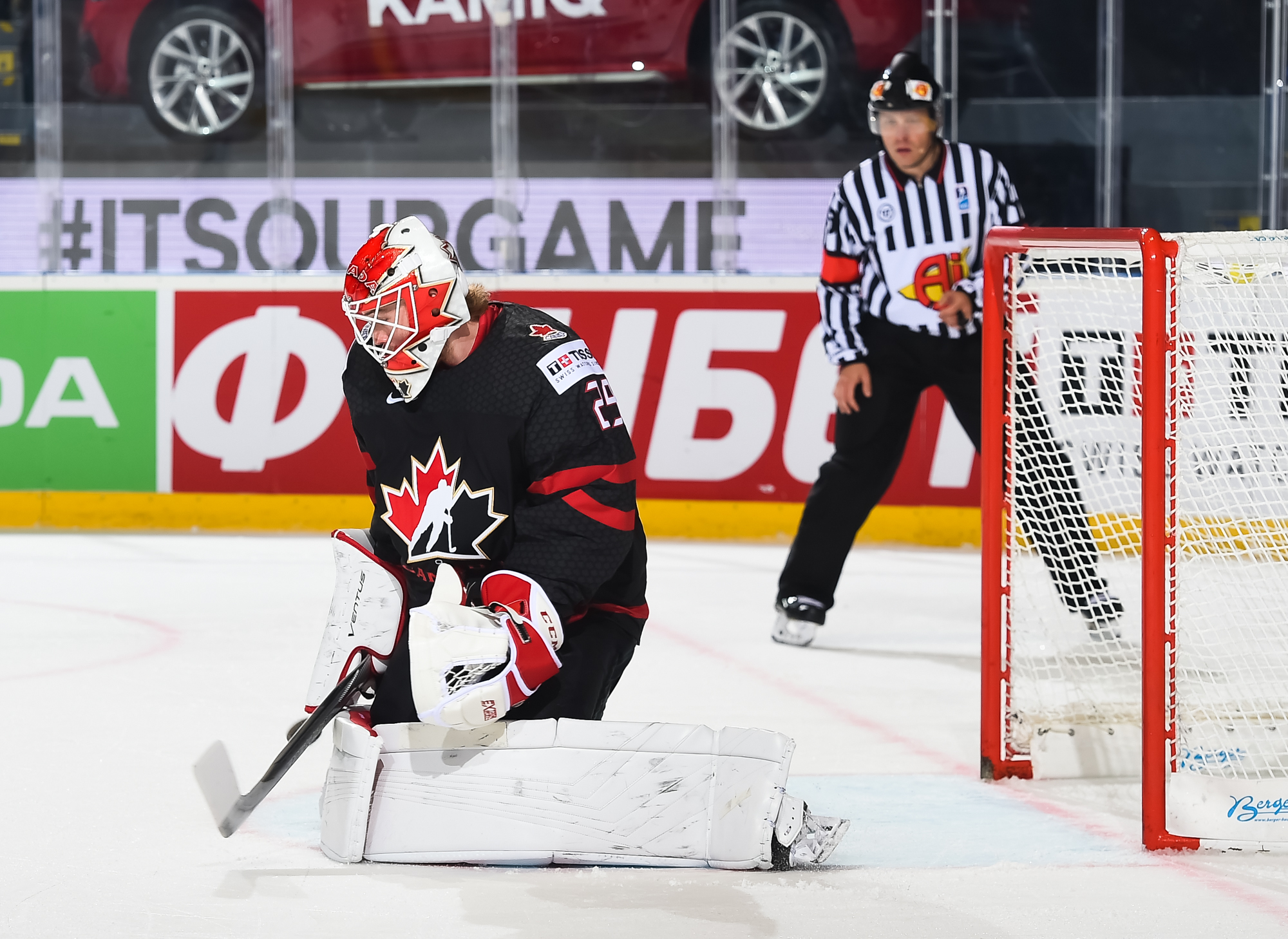 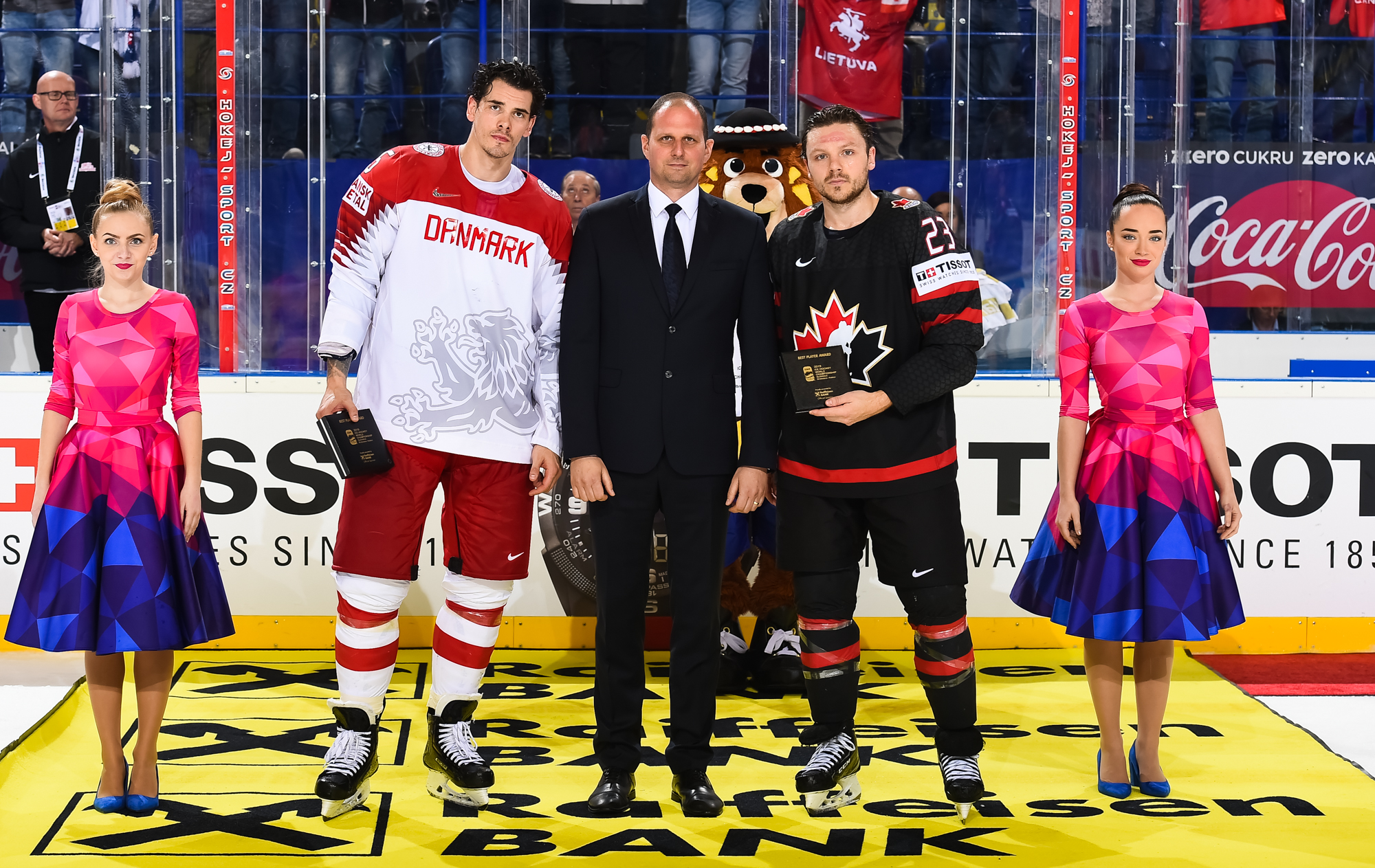 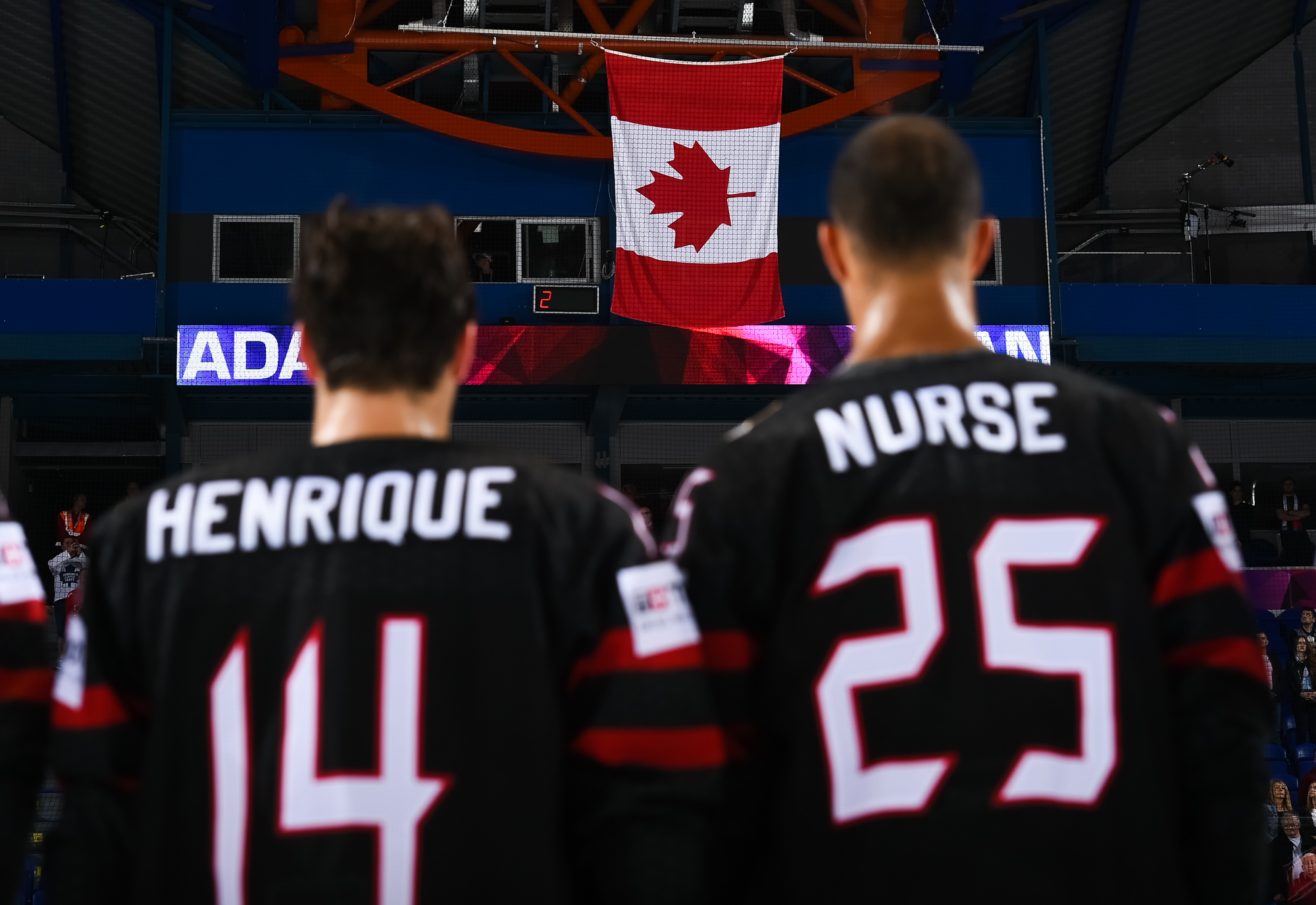 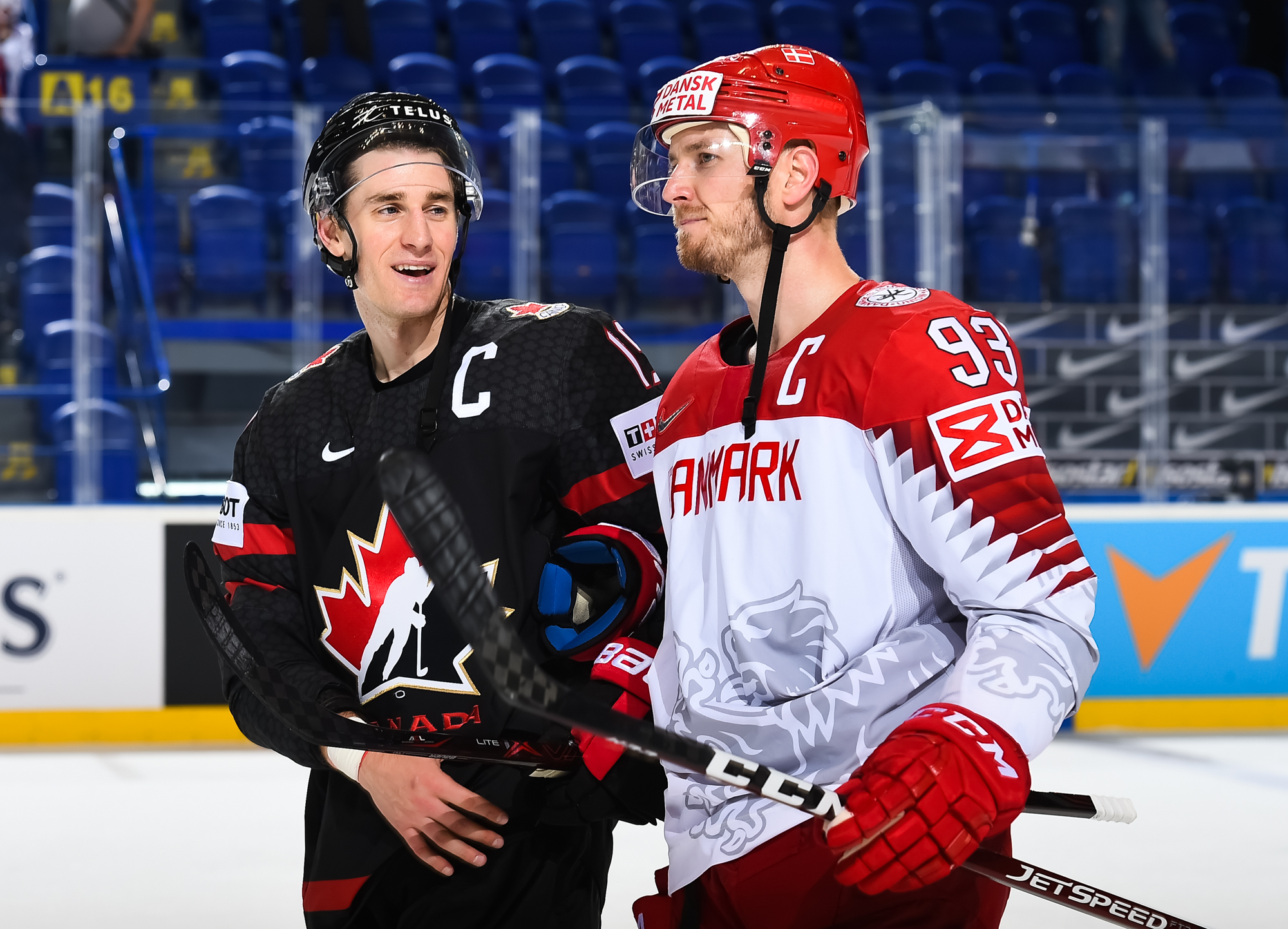