Kazakhstan joins top trio
Scoring chance for Kazakhstan in front of Lithuanian goaltender Laurynas Lubys.
photo: Marat Akimzhanov
share
Host nation Kazakhstan completed the second round of games at the 2019 IIHF Ice Hockey World Championship Division I Group A with a 3-1 victory over Lithuania to join the group of teams with six points that also includes Korea and Belarus.

Lithuania as well as Slovenia and Hungary are still winless in the tournament that continues with three more rounds of games.

Kazakhstan dominated most of the game and outshot Lithuania 40-13 but had trouble scoring the goals and had two goals disallowed due to rule infractions. In the last period Lithuania came back within one goal but didn’t manage to put the Kazakhs in more trouble than that.

“We played really strong for two periods. We could have scored more than two but give them credit, they played good defensive shell and made it a close game. We happy to get three points but it was a pretty tight game,” said Kazakhstan forward Brandon Bochenski.

Kazakhstan had a strong start and didn’t want to make the same mistake Belarus did. They played offensive hockey from the opening face-off and got the puck behind the net already after 34 seconds. Martin St-Pierre deflected a Leonid Metalnikov shot in front of the crease with his glove. That’s why after a video review the goal was disallowed.

The game continued mostly in one direction and when Nerijus Alisauskas got a penalty for holding his opponent in front of the net, the Kazakhs scored again at 10:13. This time it was a good goal. Brandon Bochenski successfully battled for puck behind the net, skated to the crease on the left side and fed Dustin Boyd on the right side, who opened the scoring with a high backhand shot.

The Kazakhs didn’t score another goal but didn’t give the Lithuanians much room either. Shots on goal were 7-1 in the first period.

“We liked the way Lithuania played against Belarus, they are a young and aggressive team,” said Kazakhstan head coach Andrei Skabelka. “We had so many chances but if you don’t score you can be punished by mistakes. Luckily we just had one.”
World Men
Kazakhstan vs. Lithuania - 2019 IIHF Ice Hockey World Championship Division I Group A
The top duo with Korea and Belarus became a top trio at the Division IA as Kazakhstan beat Lithuania 3-1 today. All three have 6 points from 2 games.
KAZ LTU 01 MAY 2019
The Kazakhs controlled the game in the second period as well and at 11:21 defenceman Nikta Kleshenko made it 2-0 with a shot that found its way into the net past Lithuanian defenceman Kostas Gusevas and goaltender Laurynas Lubys, who got his first start in the tournament. For the 18-year-old it was his first senior game at an IIHF tournament.

The Kazakhs celebrated again a bit later but had another goal waved off. After a long shot from Anton Sagadeyev that after a deflection went over Lithuanian goaltender Lubys, Alikhan Asetov deflected the puck high and in the crease and it didn’t count following a video review. The Lithuanians could call themselves lucky that Asetov touched the puck as it might have gone over the goal line without deflection.

Instead of 3-0 the score became a 2-1 game at 1:24 of the third period. Lithuania still had few scoring chances but a lucky bounce brought the puck into Kazakhstan’s net. The Kazakhs didn’t bring the puck under control after a long shot from Arvidas Domeika. Dustin Boyd tried to save with his skate but the puck went from behind to the pad of goaltender Henrik Karlsson, who then turned the pad and made the puck move into the own net.

The goal encouraged the Lithuanians to create more chances being just one goal down from tying the game but their best period of the game wasn’t enough to beat Kazakhstan. Darren Dietz scored the 3-1 goal with 39 seconds left in the game when Lubys just wanted to skate to the bench for an extra attacker.

Despite the second loss Lithuania head coach Daniel Lacroix was happy with how his team battled.

“We’re a young team that’s learning every game and hopefully we continue to grow. To win a game we almost must have a perfect game,” said Lacroix. “When you have young players you’re going to do mistakes but you also play with composure and enthusiasm. We have to find ways to keep the games really tight and score when we have opportunities.”

About the debut of Lubys he said: “We put a young guy in the net against a tough opponent and he played pretty well and kept us in the game.”

Both teams will continue with a full day of games tomorrow. Lithuania plays at 12:30 against Hungary, the Belarus-Slovenia game follows at 16:00 and host Kazakhstan plays leader Korea at 19:30.
Kazakhstan vs. Lithuania - 2019 IIHF Ice Hockey World Championship Division I Group A 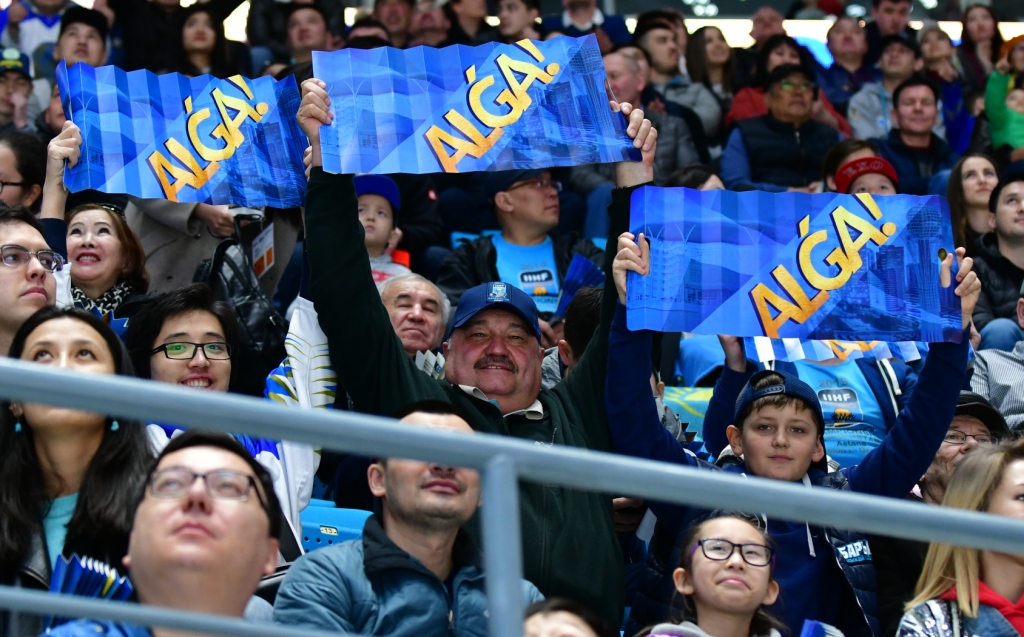 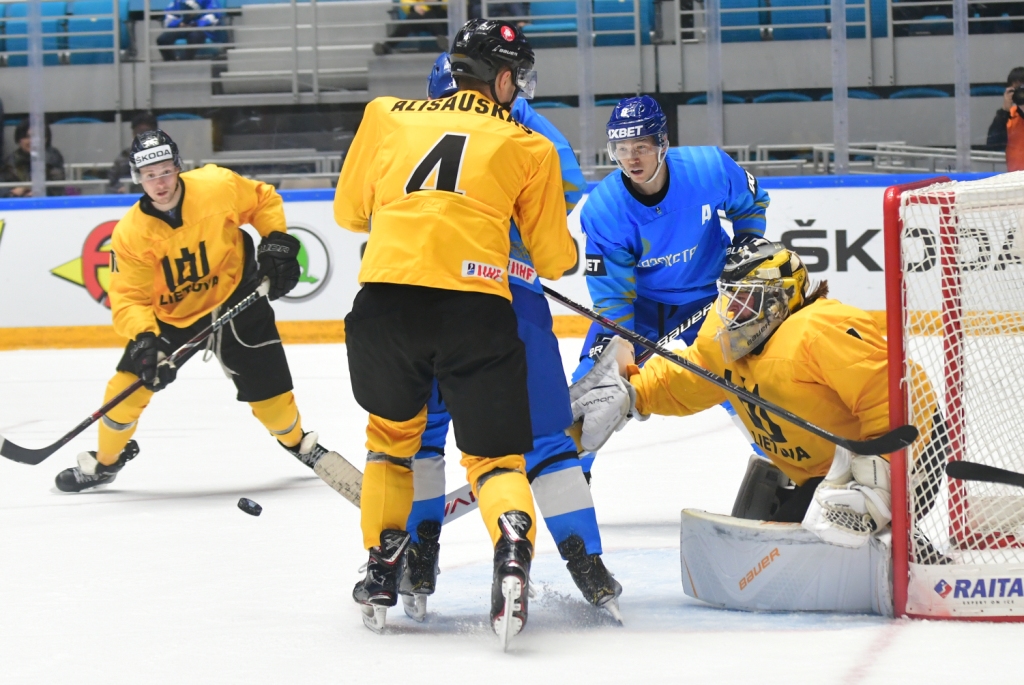 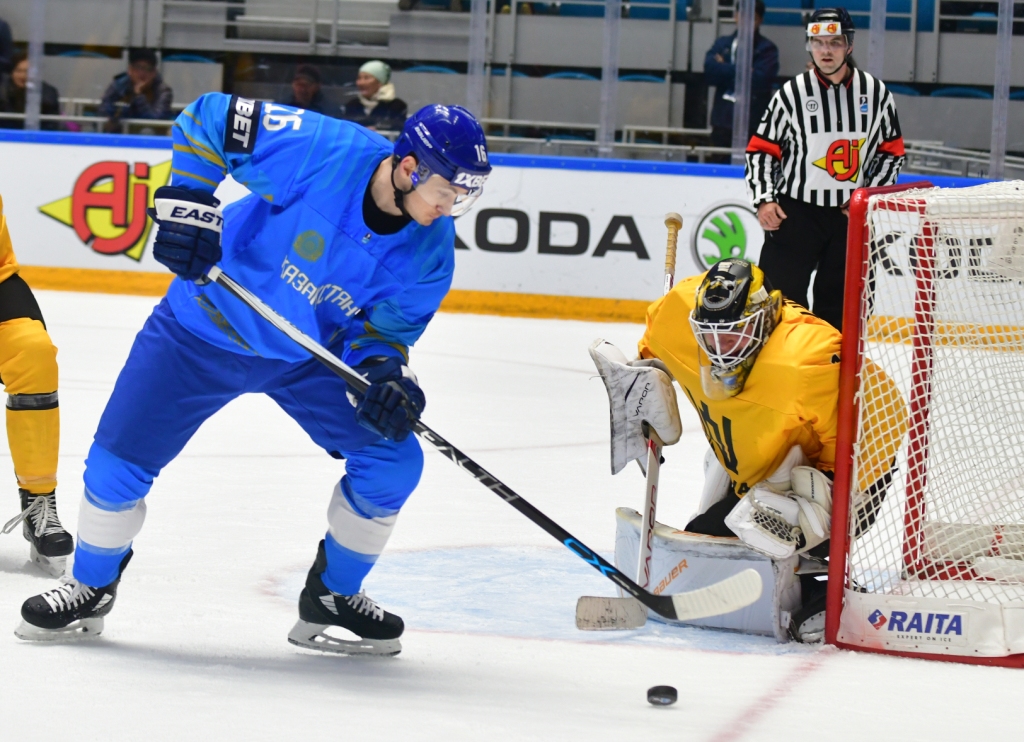 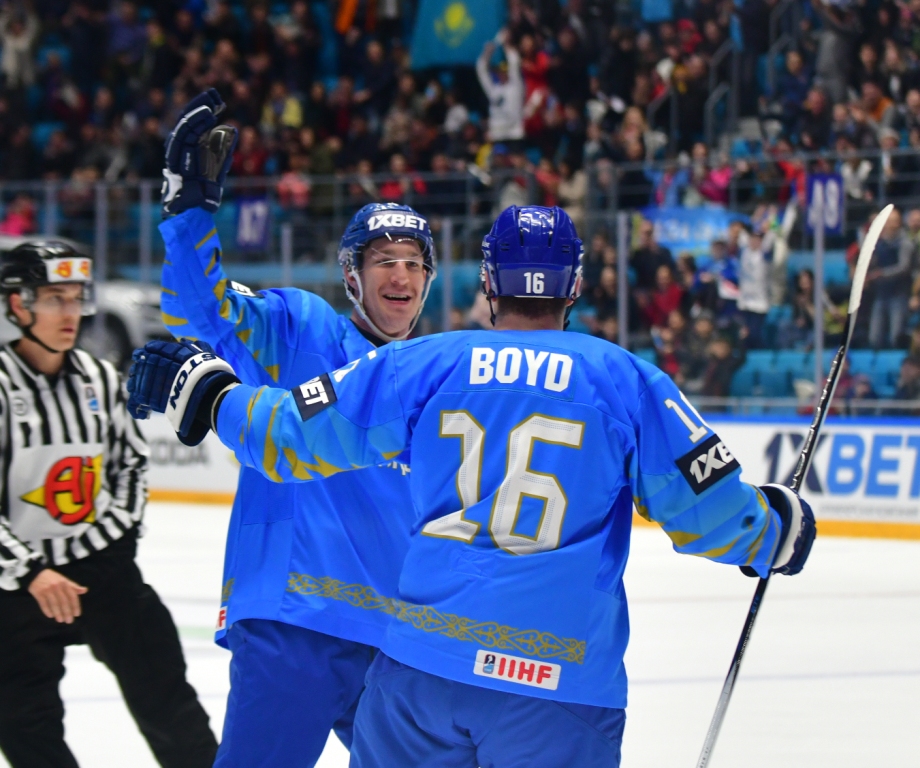 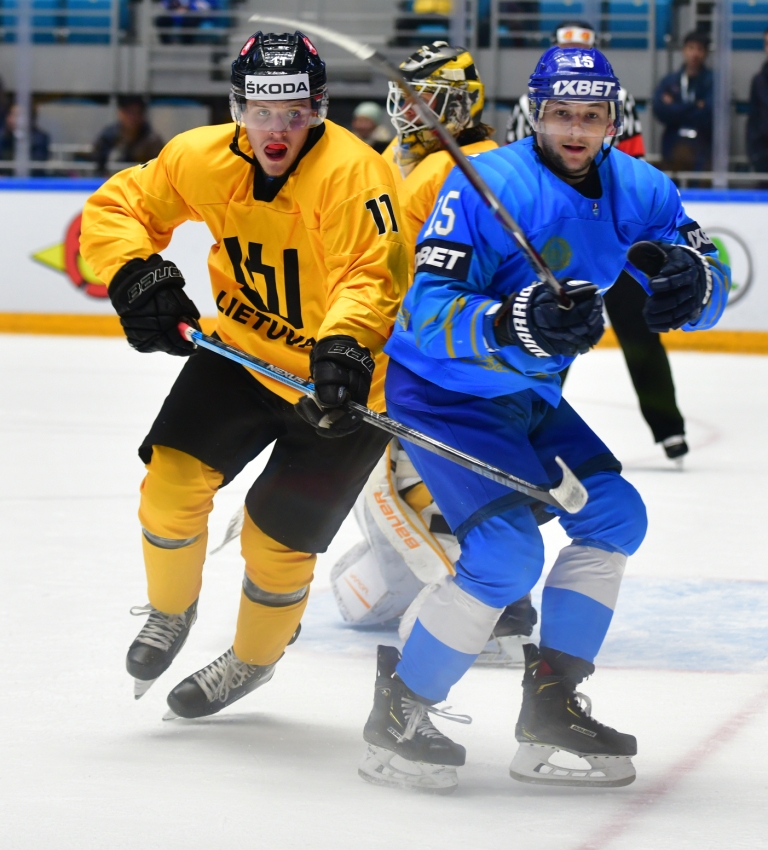 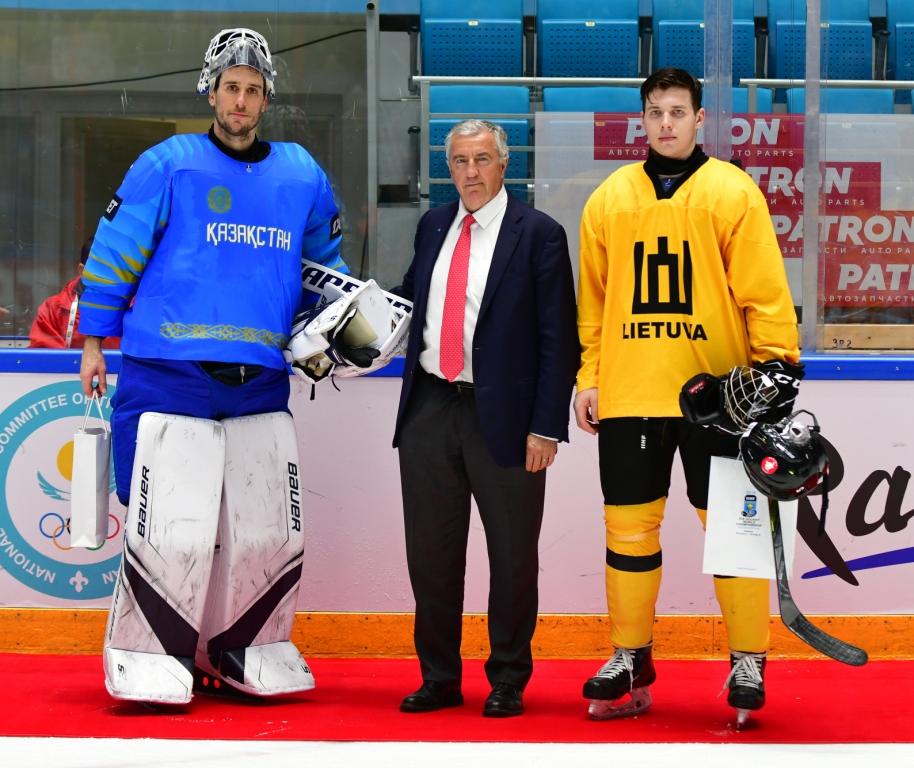 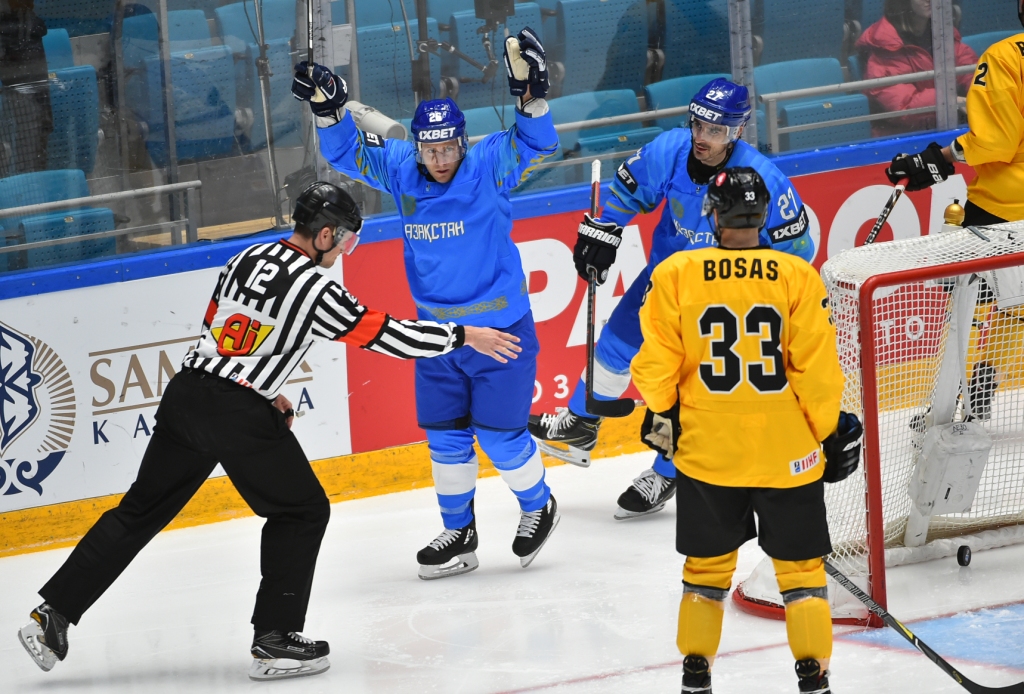 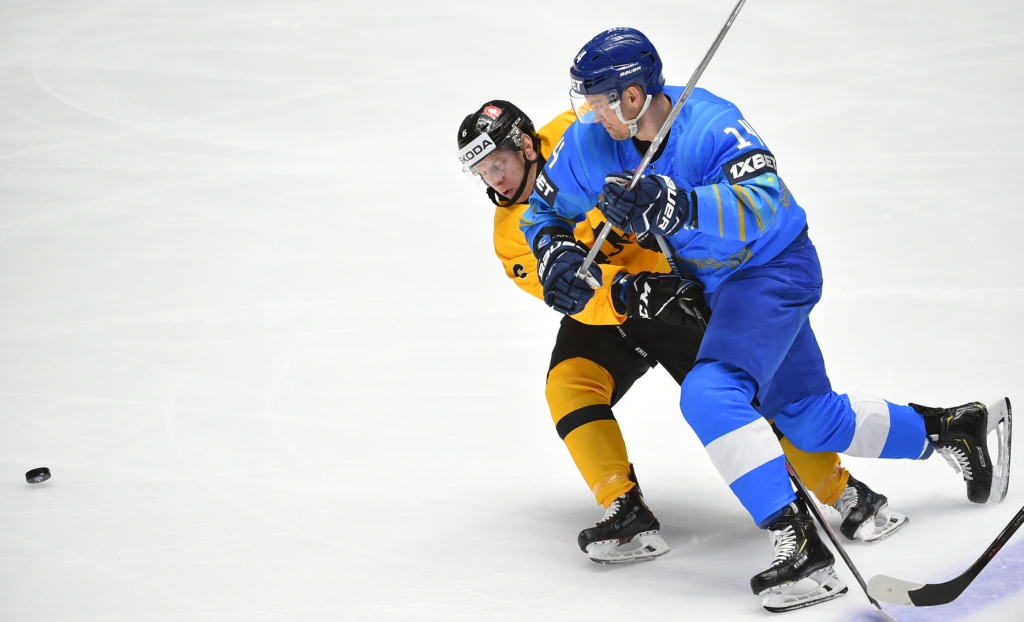 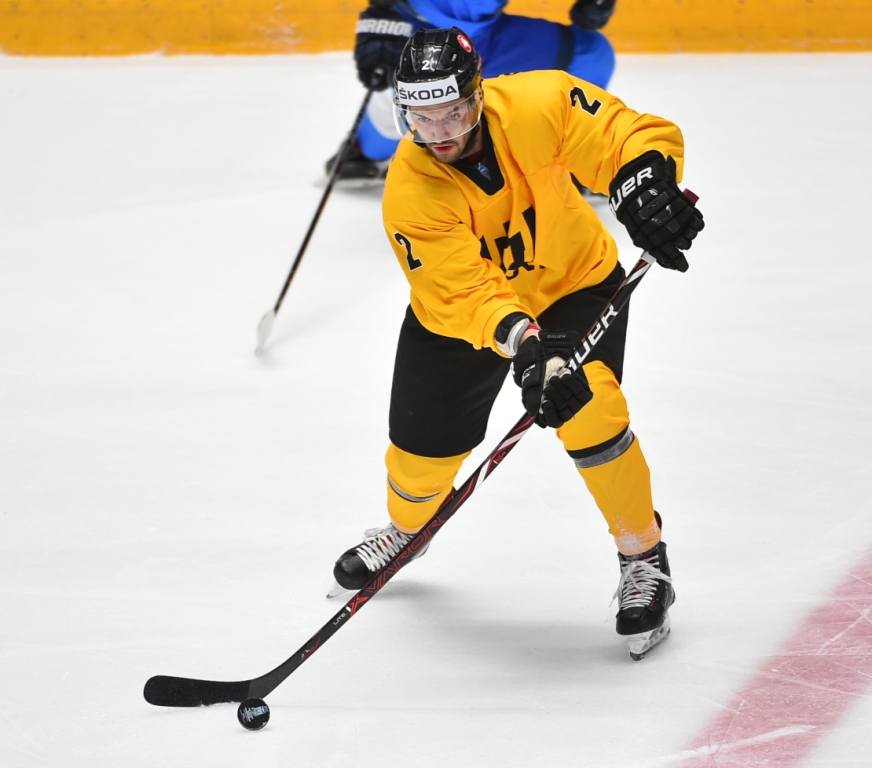 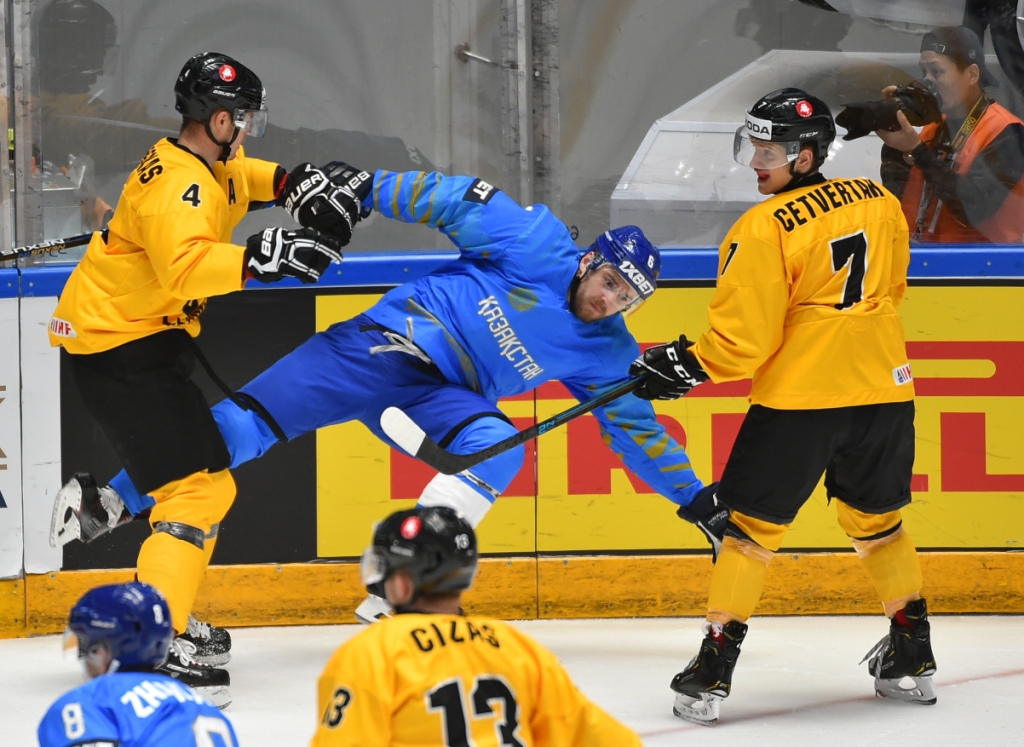 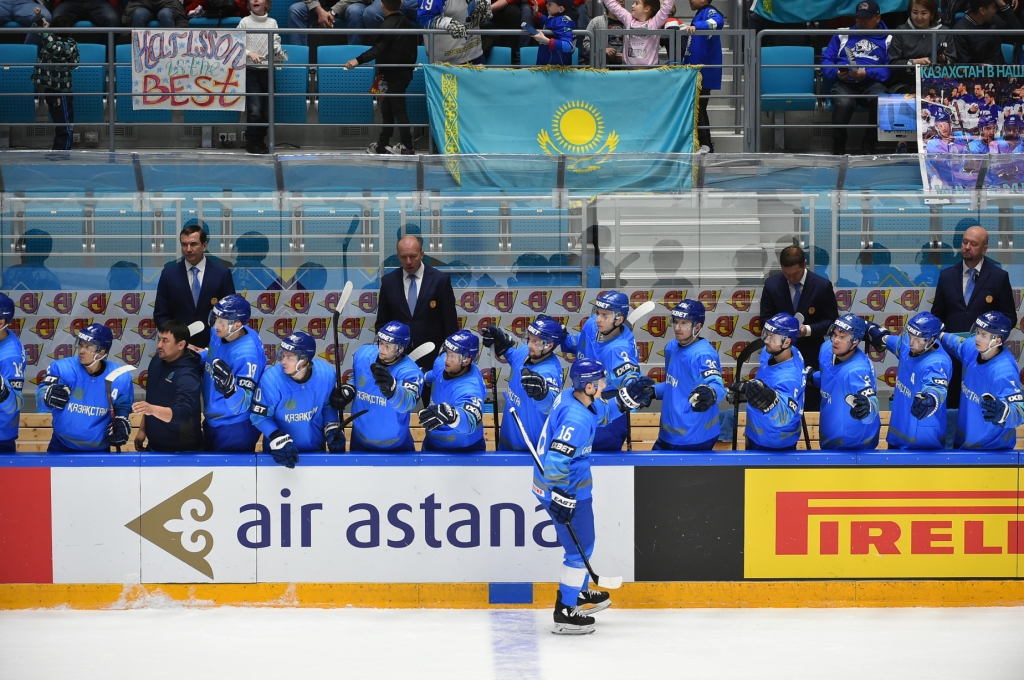 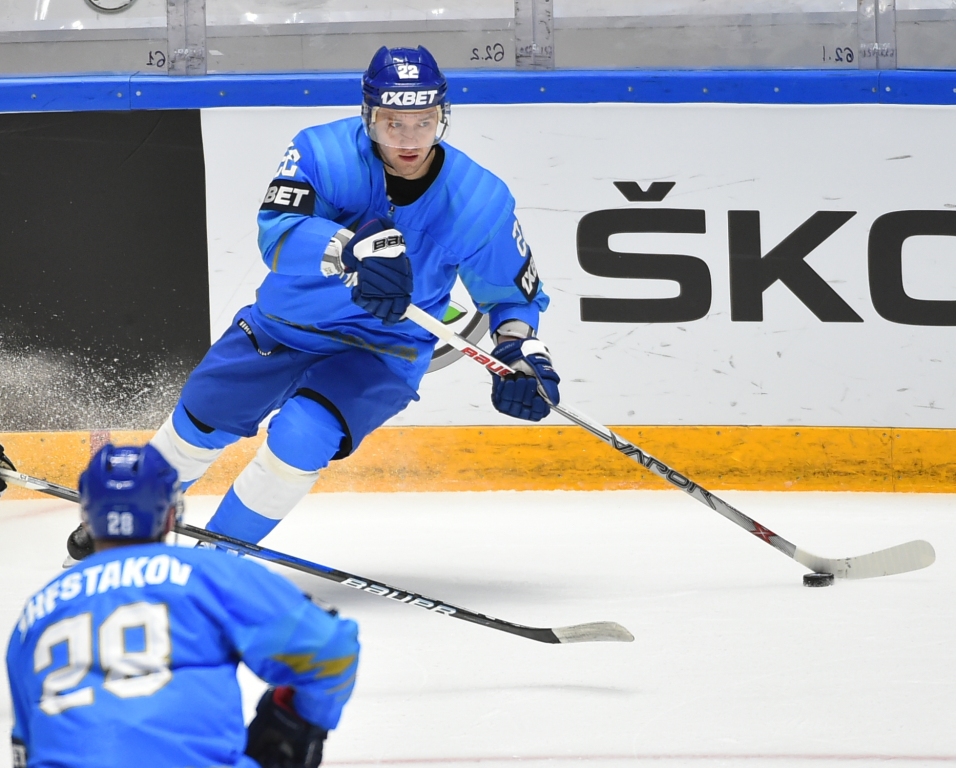 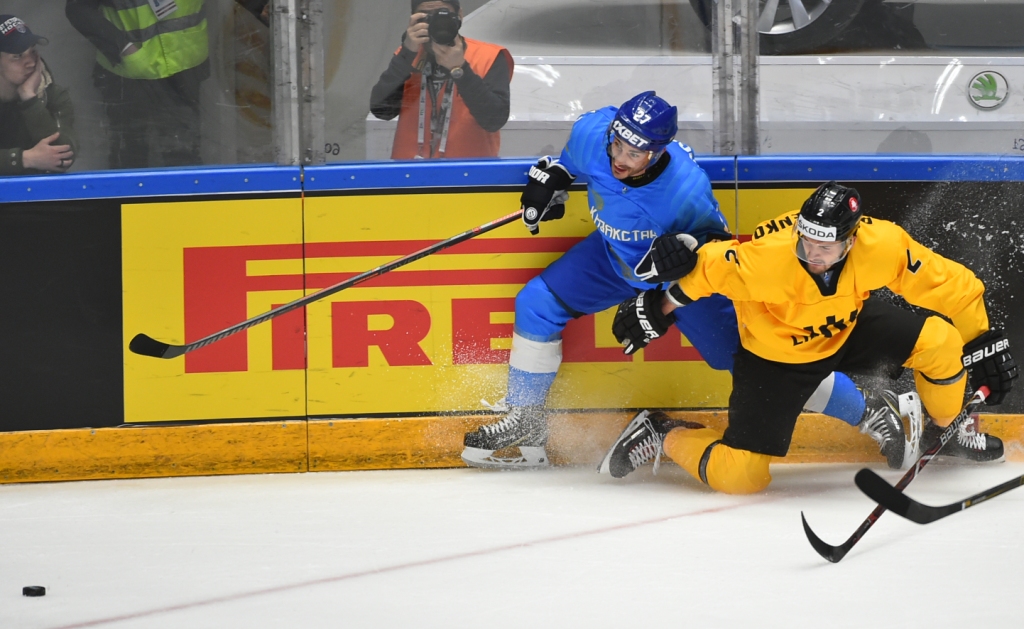 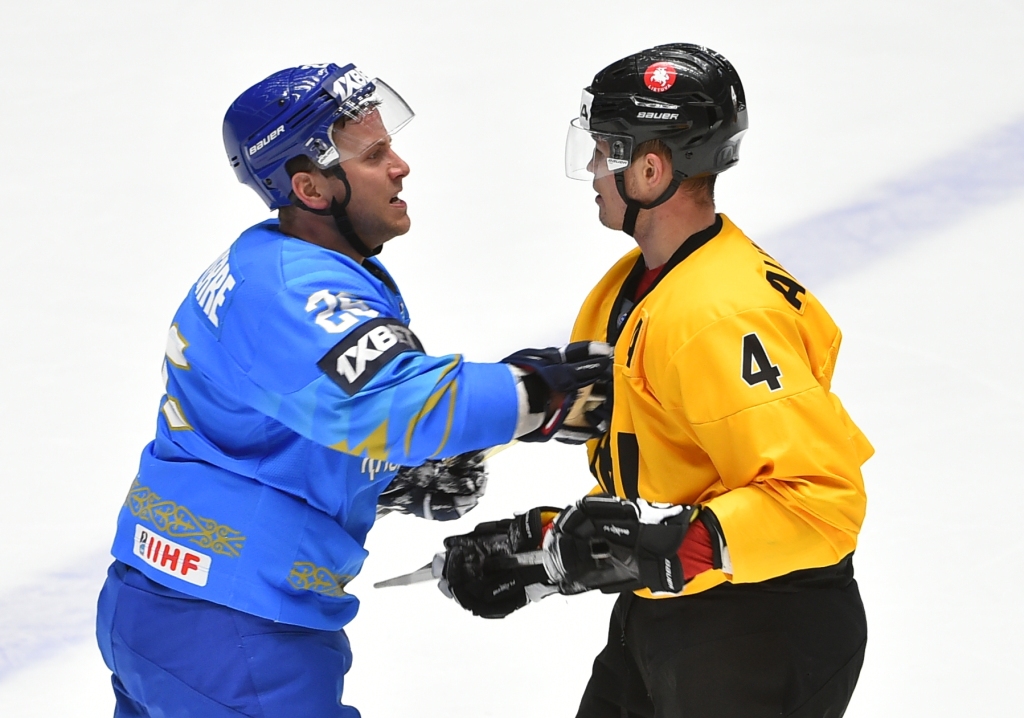 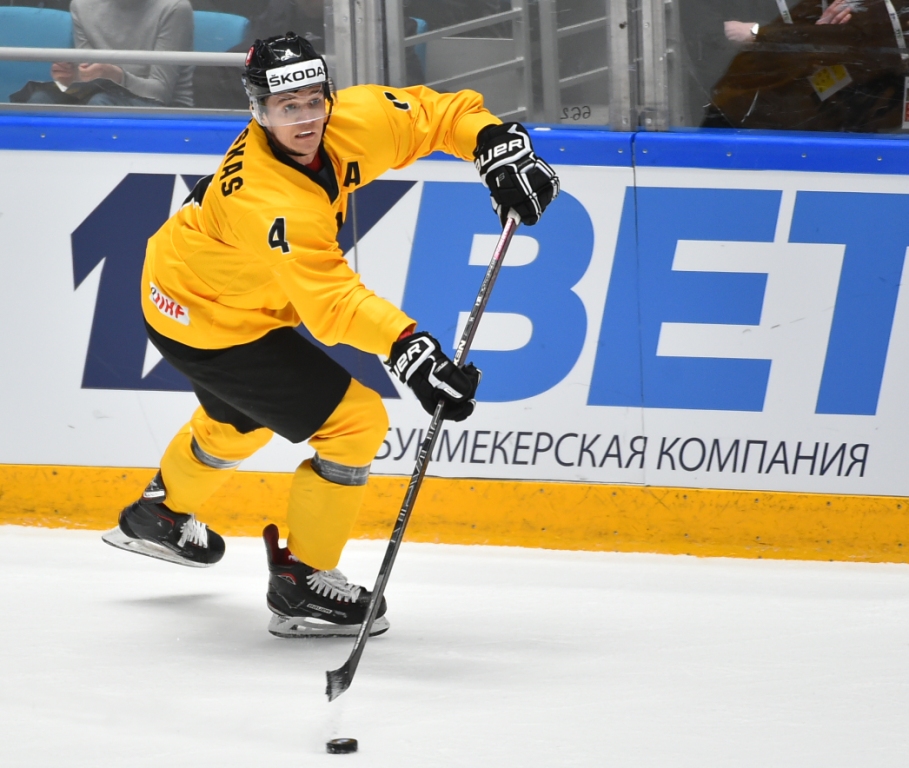 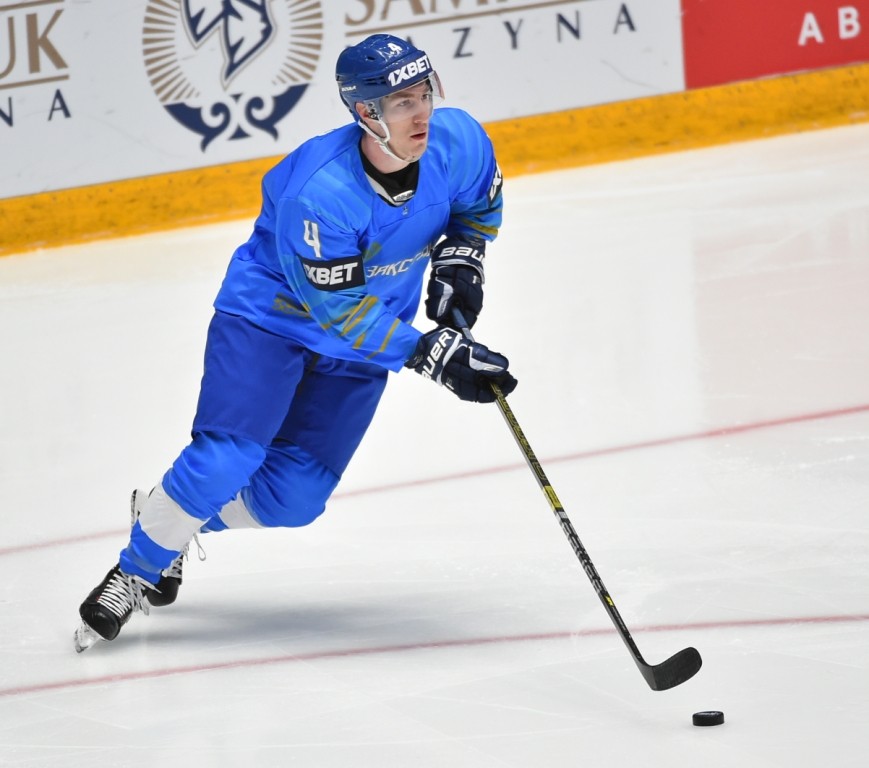 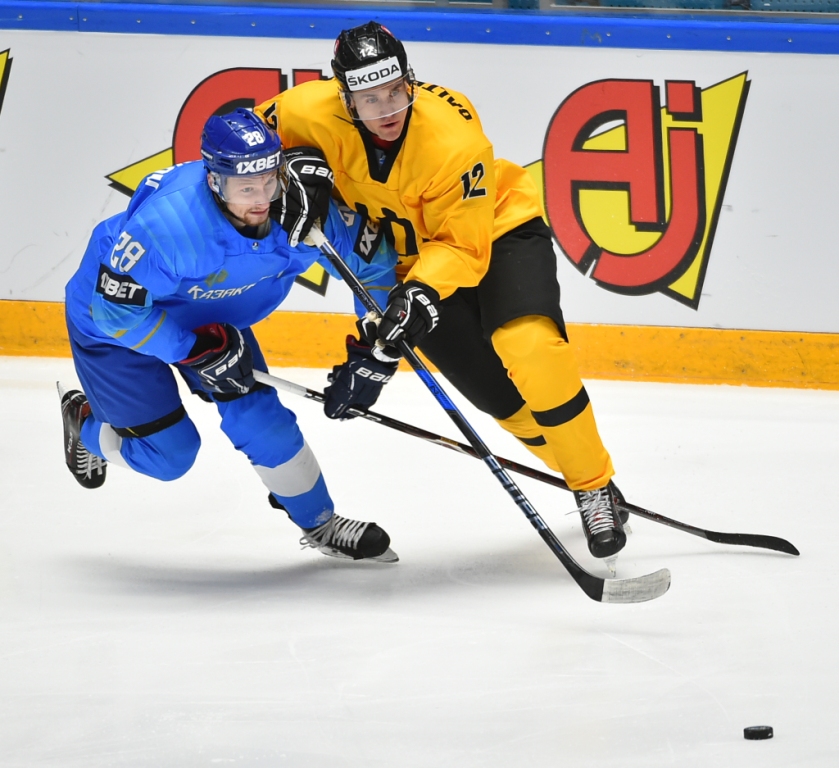 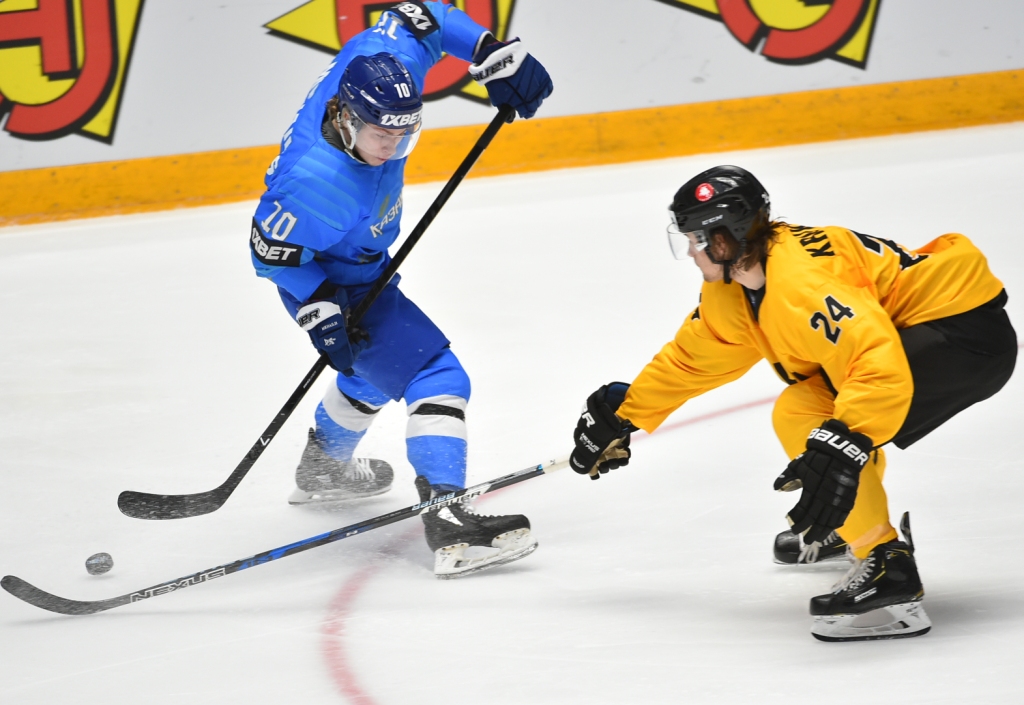 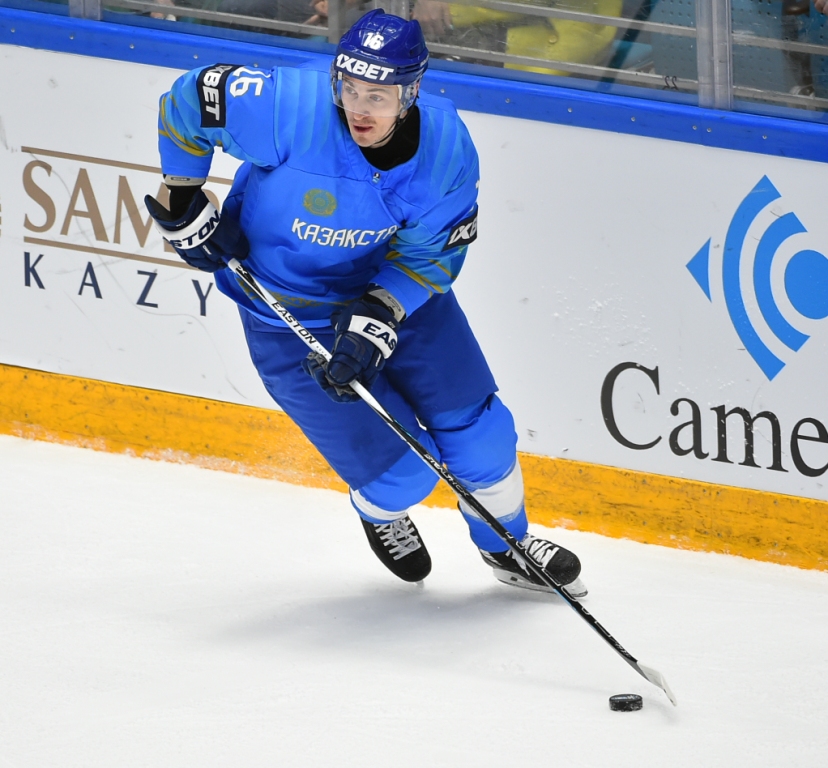 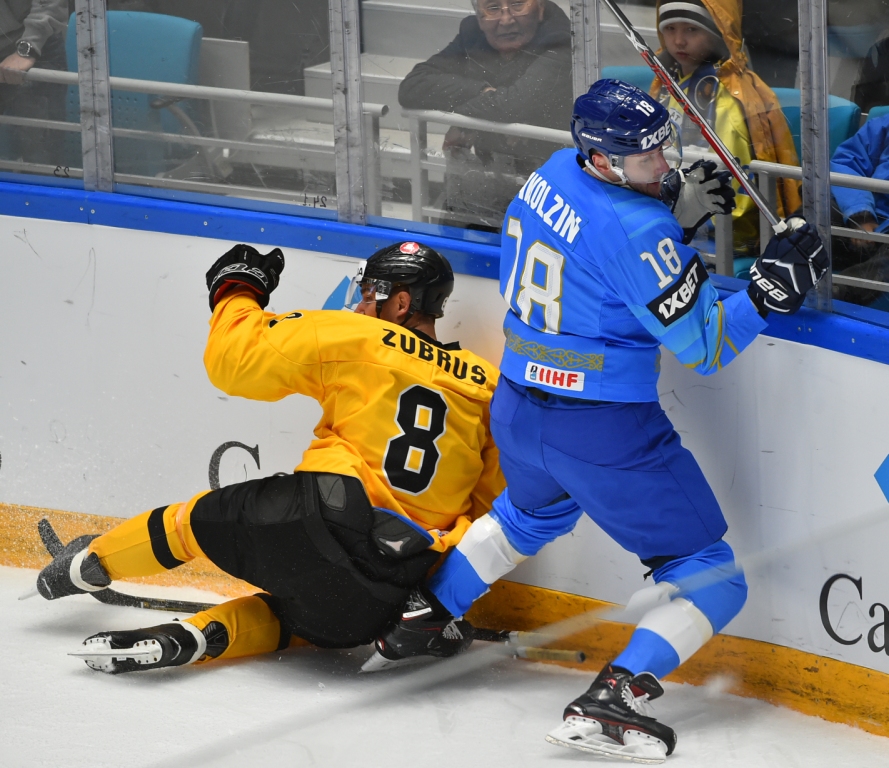 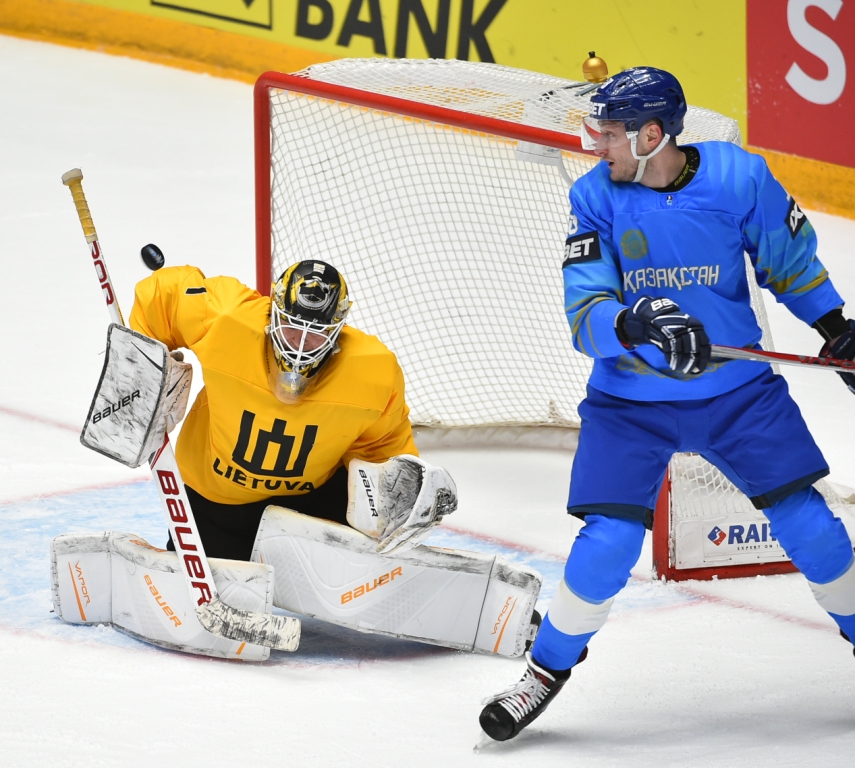 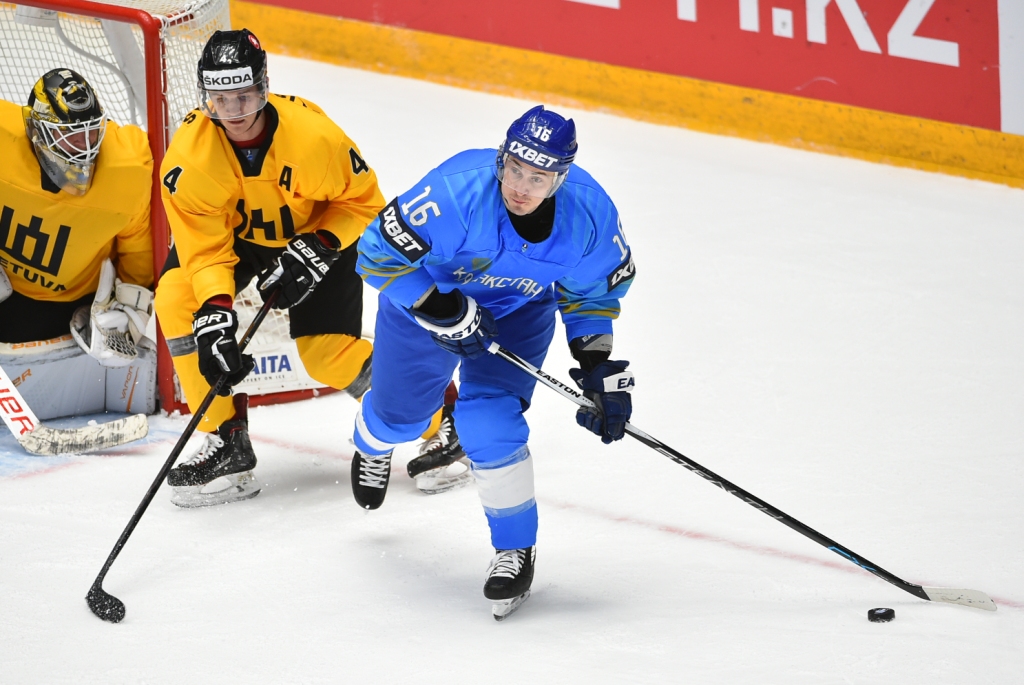 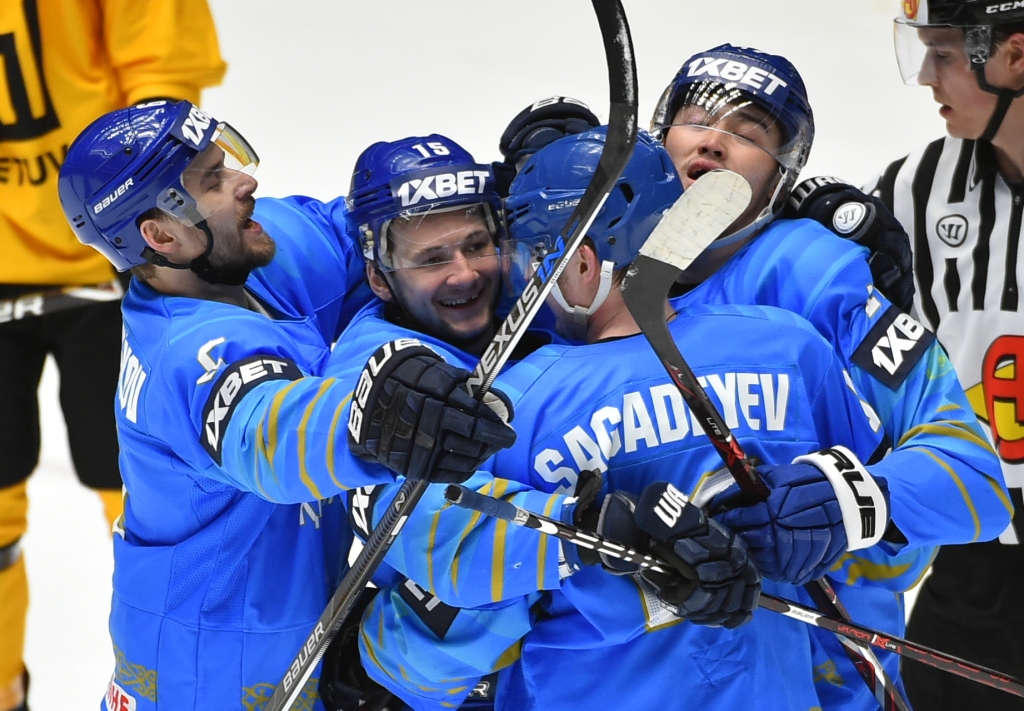