The Swiss hung tough with Finland for half the game before the hosts pulled away for a 6-2 win on Monday. Switzerland completes Group A play in last place with four losses in Espoo.

"They're a good team," said Switzerland's Alina Muller. "We had a little problem in the third period the whole tournament so far. Against all the teams, we try to battle the first two periods, and then in the third they get some more goals. We just need to skate a little more, a little harder, and win every battle. But they're a good team. They deserved it."

Captain Jenni Hiirikoski lit the path to victory with four assists, while Riikka Sallinen became, at 45, the oldest woman ever to record points in a Women's Worlds game with her two assists.

"I think Jenni's a player that does a lot of good things that doesn't just include the goals," said Karvinen. "And I think that's what she did through the first two games. But obviously she's a good offensive player, so that came into play today, and it's important for us that she can bring that to the table."

The Finns, led by their veterans instead of their youthful fourth line with Elisa Holopainen and Viivi Vainikka for a change, outshot Switzerland 45-17. They were full value for the victory.

The Finns will face Canada in their group finale. Finland achieved a first at the last Women's Worlds in Plymouth, Michigan in 2017 with a 4-3 round-robin win over Canada on Ronja Savolainen's late goal. They're hoping to repeat the feat.

Asked what she expects from Canada, Karvinen replied: "High speed, discipline, and strong physical play. But I also know that we can play with them. We just have to keep to our game plan and stay confident. It's just a matter of doing it for 60 minutes."

Evelina Raselli and Muller replied for Switzerland, which must now refocus and reload for the playoffs. All five Group A teams are guaranteed a quarter-final berth.

The Finns now have two straight wins after falling 6-2 to the U.S. in their opener. For the Swiss, this effort was at least an improvement on their 8-0 loss to the defending champion Americans, who outshot them 57-6.

Tuominen described the difference between the North American teams: "I think Canada is more straightforward. They're crashing the net more. The USA is doing a little drop pass here and there and trying to find that great play and then score in the empty net."

In net, Finland’s Noora Raty got the night off versus Switzerland as Eveliina Suonpaa received her first and only senior IIHF start since a 6-2 loss to Canada at the 2015 Women’s Worlds. Switzerland’s Janine Alder was rested in favor of Andrea Brandli, who returned between the Swiss pipes for the first time since the tournament-opening 6-0 defeat against Canada.Of Suonpaa, Tuominen said: "I think she was great. I didn't feel too much difference from Noora. I think she was pretty stable and calm. I'm happy for her."

World Women
Finland vs. Switzerland - 2019 IIHF Ice Hockey Women's World Championship
The Swiss hung tough with Finland for half the game before the hosts pulled away for a 6-2 win on Monday.
FIN SUI 08 APR 2019

Switzerland came out skating hard and opened the scoring at 13:34. Raselli was left unguarded in front to bang in a Rahel Enzler rebound for her second goal of the tournament

The top Finnish unit struck back just 26 seconds later. Tapani, whose nine points tied her for third overall at the 2017 Women’s Worlds with the U.S.’s Hilary Knight and Switzerland’s Lara Stalder, tipped in Hiirikoski’s shot from the blue line. The play was video-reviewed, and when the referee pointed to centre ice, Finnish flags waved happily all over Metro Areena.

"I think it was a little bit of a slow start and we made some mistakes," Tuominen said. "We didn't take the players in front of the net, like easy, easy things like that, where they scored. But then we got it going and our first line was pretty amazing."

Dominique Ruegg had a glorious chance to restore Switzerland’s lead when she stole the puck and got behind the Finnish defence, but she slid her backhand deke wide. Moments later, the Finns thought they’d taken the lead when Annina Rajahuhta barged to the net to bang in a rebound. However, this time a video review voided the goal due to goaltender interference.

Still, the Finns stuck with the program, and at 17:59, it was 2-1 on the power play. Lindstedt got a piece of Hiirikoski’s centre point shot and put it through Brandli.

Muller, the youngest hockey player ever to win an Olympic medal (bronze) in Sochi 2014, looked skyward with disgust when Suonpaa foiled her on a clean break before the period ended.

Tapani and Karvinen took back-to-back minors at the start of the second period. When Karvinen skated to the box for her tripping minor, she clearly did not share the sentiments of the Pointer Sisters’ “I’m So Excited.” Yet on the ensuing power play, Muller was pumped after zinging a wicked short-side wrister to make it 2-2 at 5:48. However, that was as good as it got for coach Daniela Diaz's women.

"It was kind of a lucky shot," said Muller, who led last year's Olympics with seven goals, including four against the unified Korean team. "I just tried to shoot and it went in. I had better chances before and didn't score. So I felt pretty good that it went in, but it didn't change anything."

At 13:31, Valimaki made it 3-2 with a gutsy tip, getting a piece of Lindstedt’s cannon from the right point as she fell to the ice beneath a Swiss defender.

Karvinen gave the Finns some breathing room at 4-2 when she took Hiirikoski’s pass in the high slot and pivoted to surprise the Swiss goalie with a high backhander at 17:12. It was the 2014 Olympic points leader’s first goal of the tournament, and this time the excitement was for real.

Just past the six-minute mark of the third period, Finland's Sanni Hakala and Switzerland's Kaleigh Quennec inadvertently crashed into each other off a draw in the Swiss. They both lay prone on the ice before being helped off by their teammates.

At 7:14, Tuominen hustled to the front of the net and popped in the 5-2 goal on a nice set-up from the Karvinen unit. Karvinen poked in a Tapani rebound at 9:43 to round out the Finnish scoring.

Post-game, Karvinen continued to reflect on the 2017 win over Canada and the upcoming rematch: "We have a lot of players who were there, but we also have the young ones here who have already proved they are not scared to play against them. So we have a group that's really confident. I think we're here to make a change in how it's been. We're here to compete. We're here to win. You will see us battling." 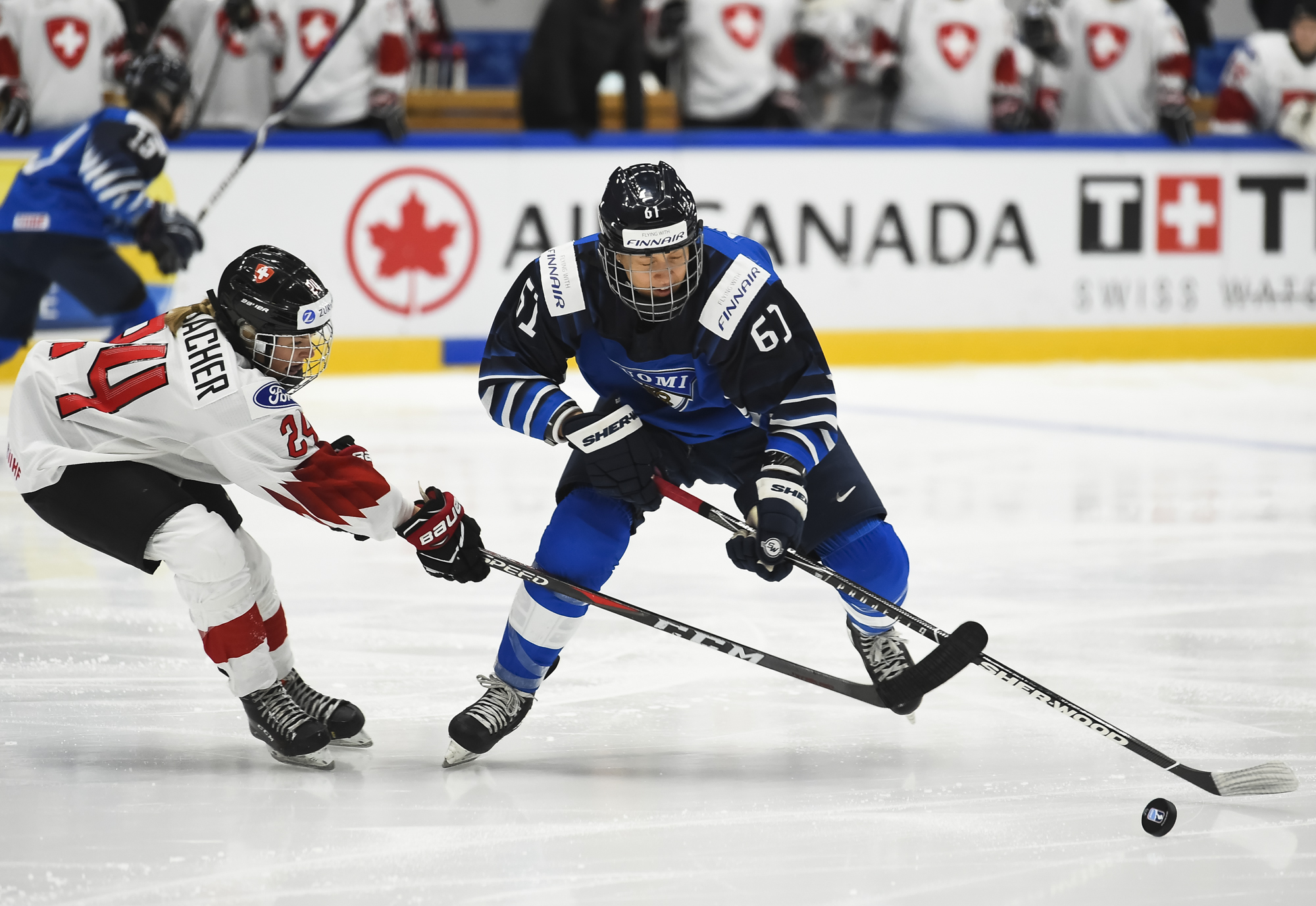 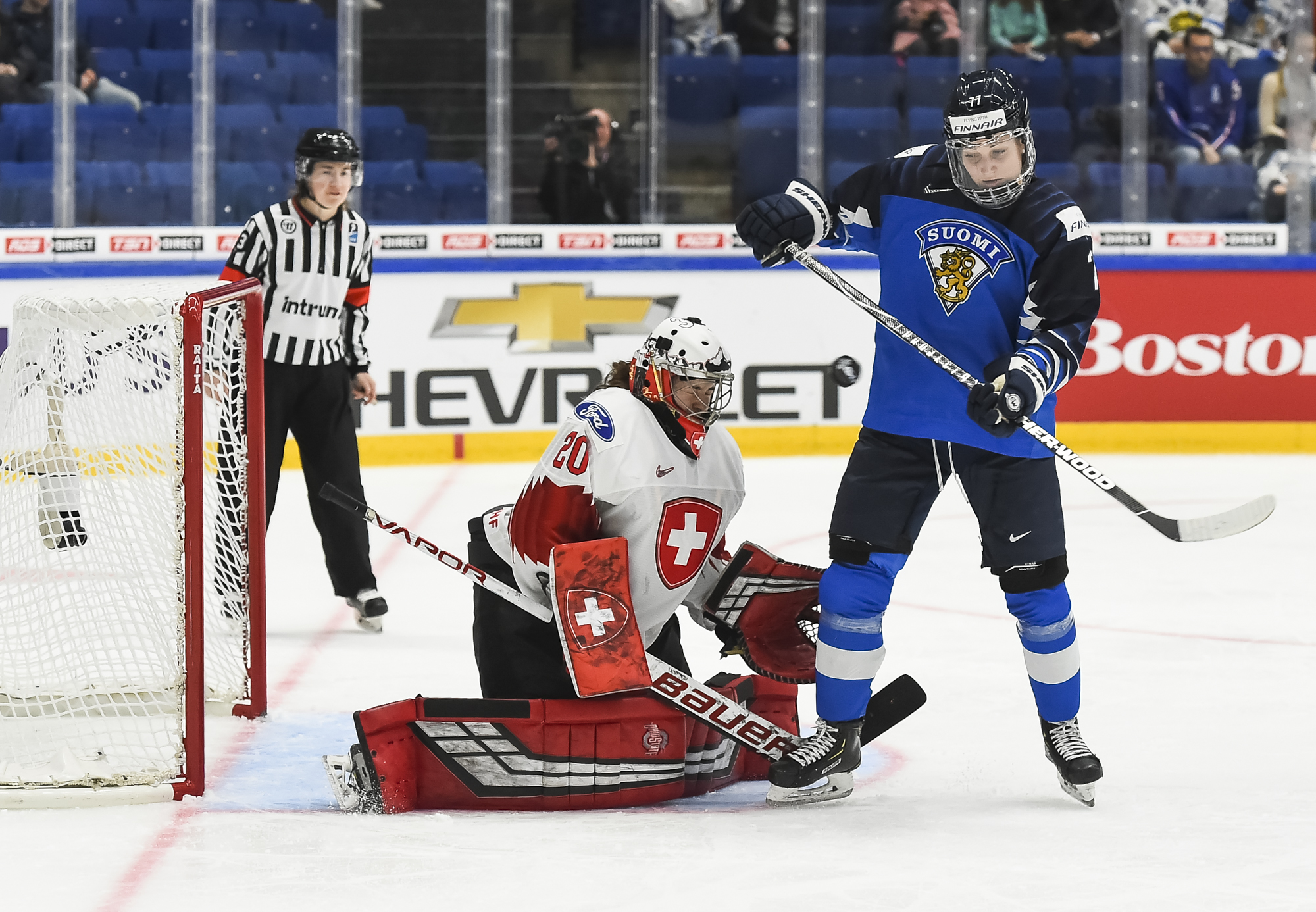 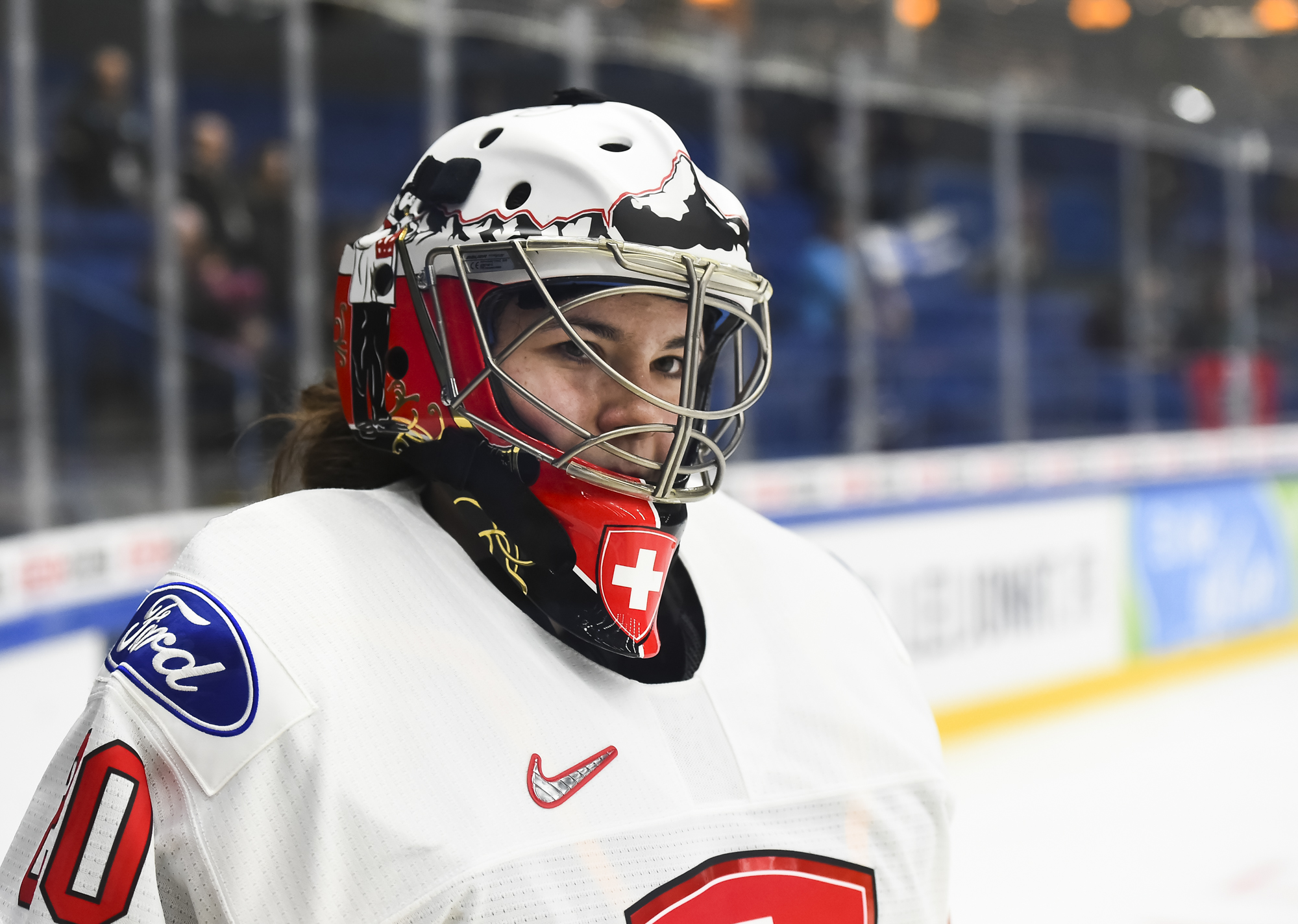 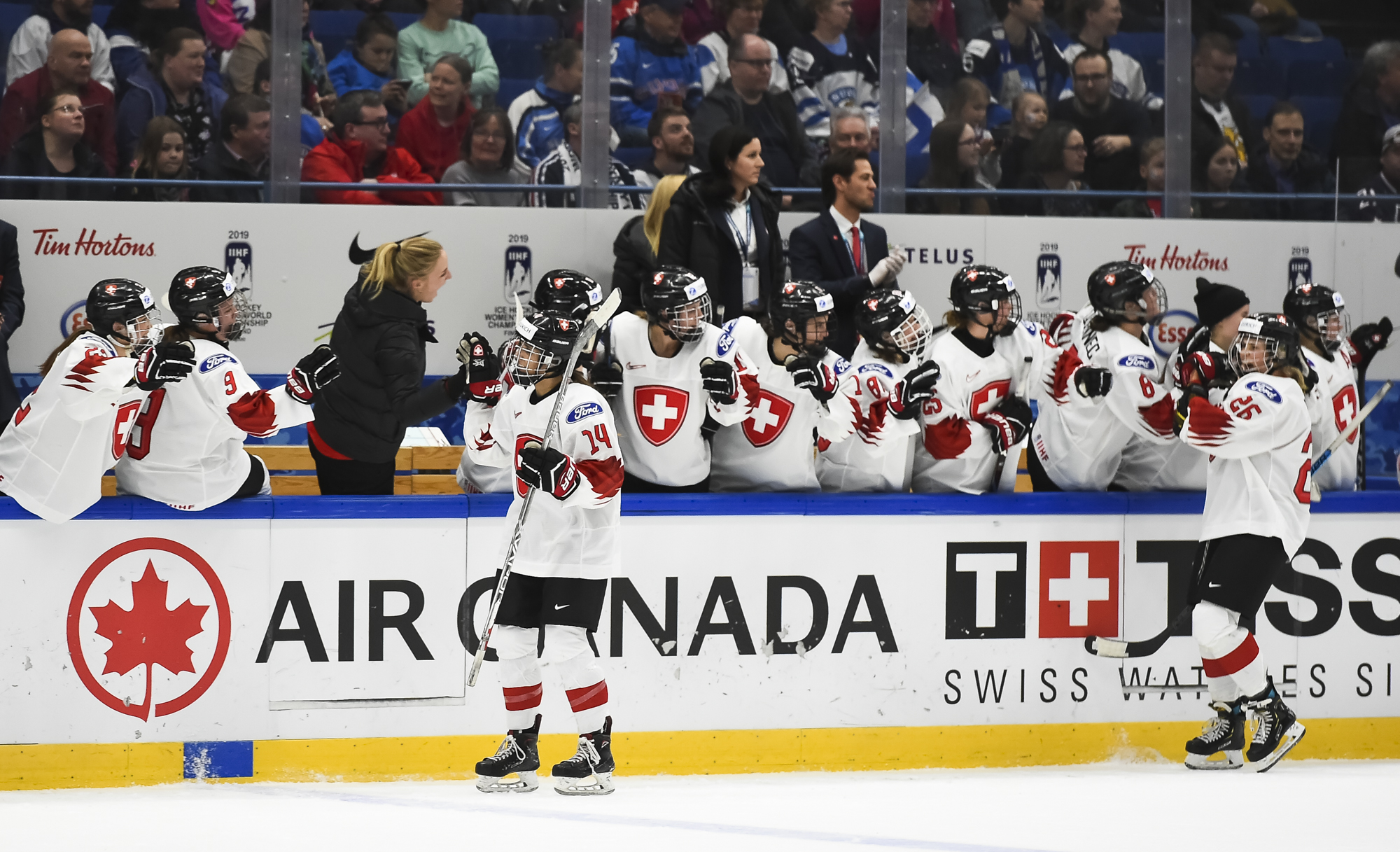 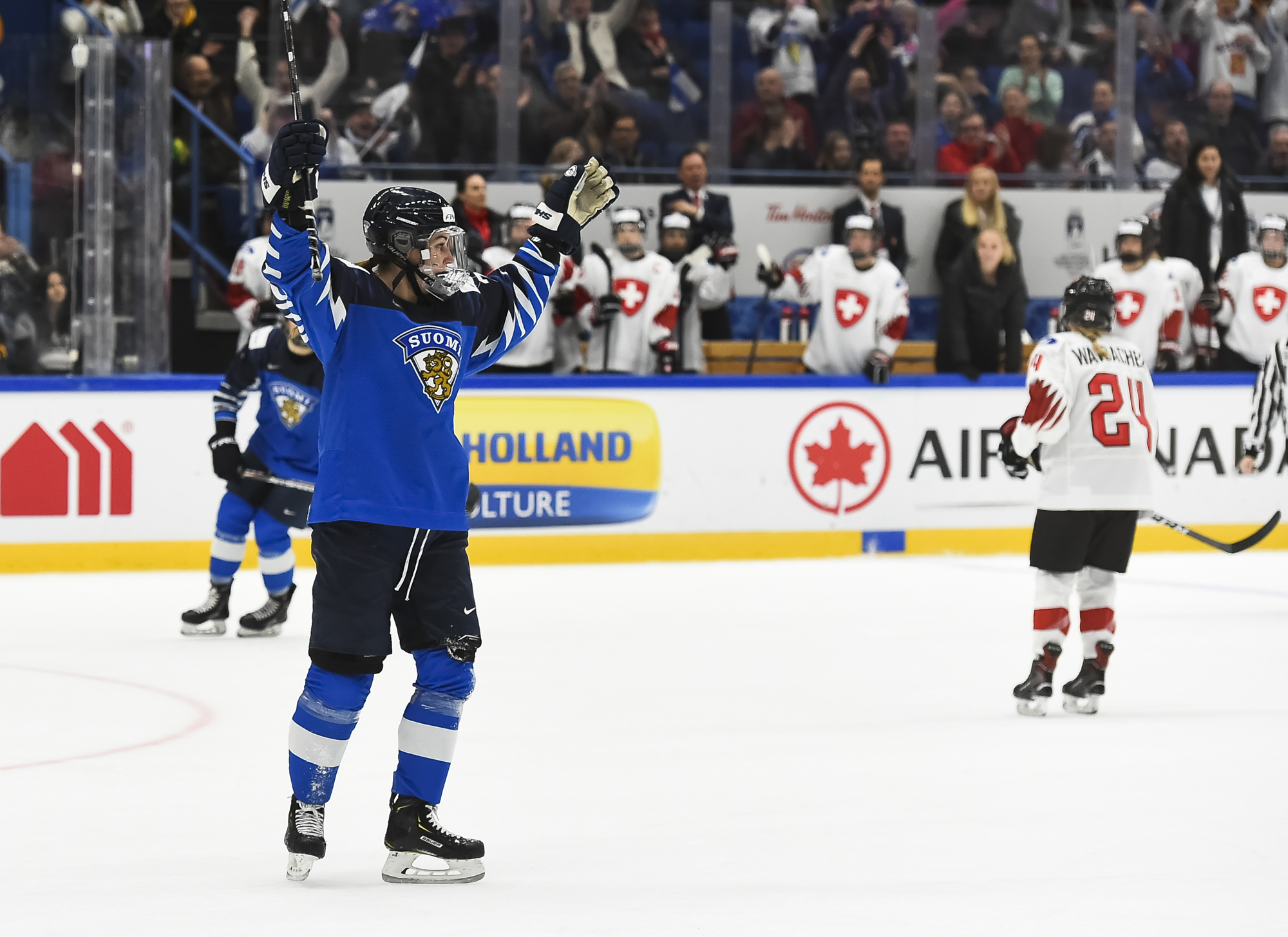 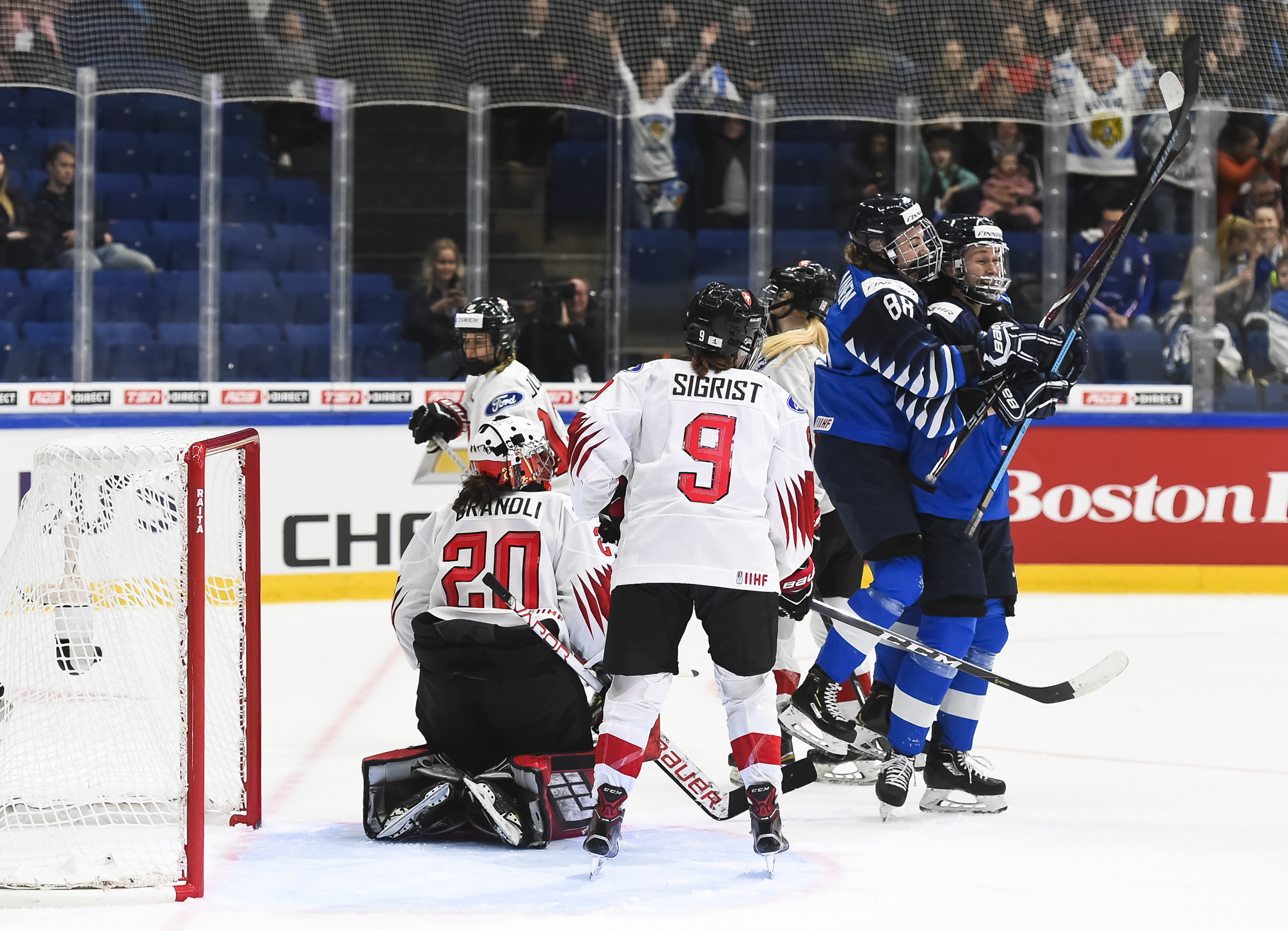 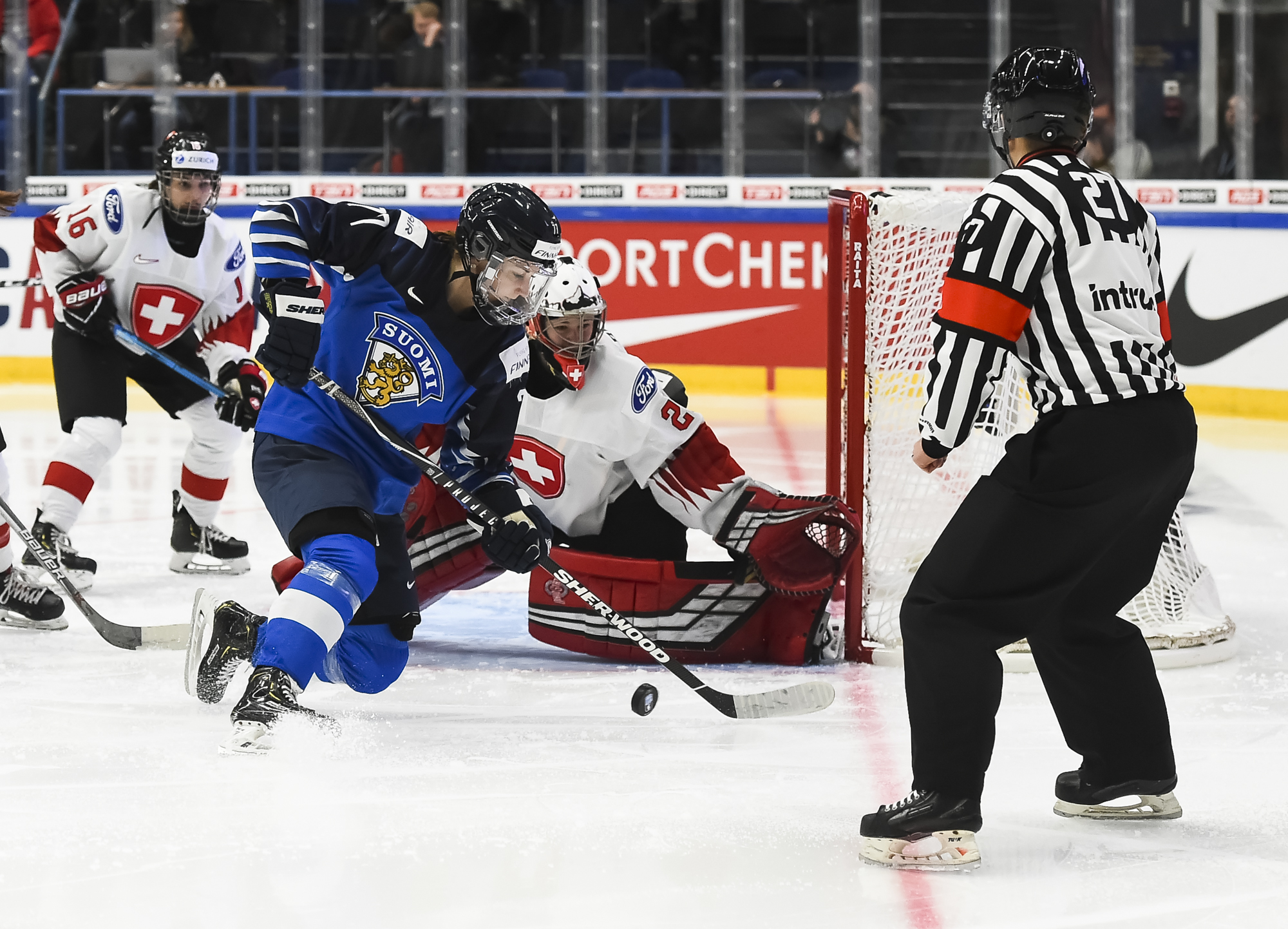 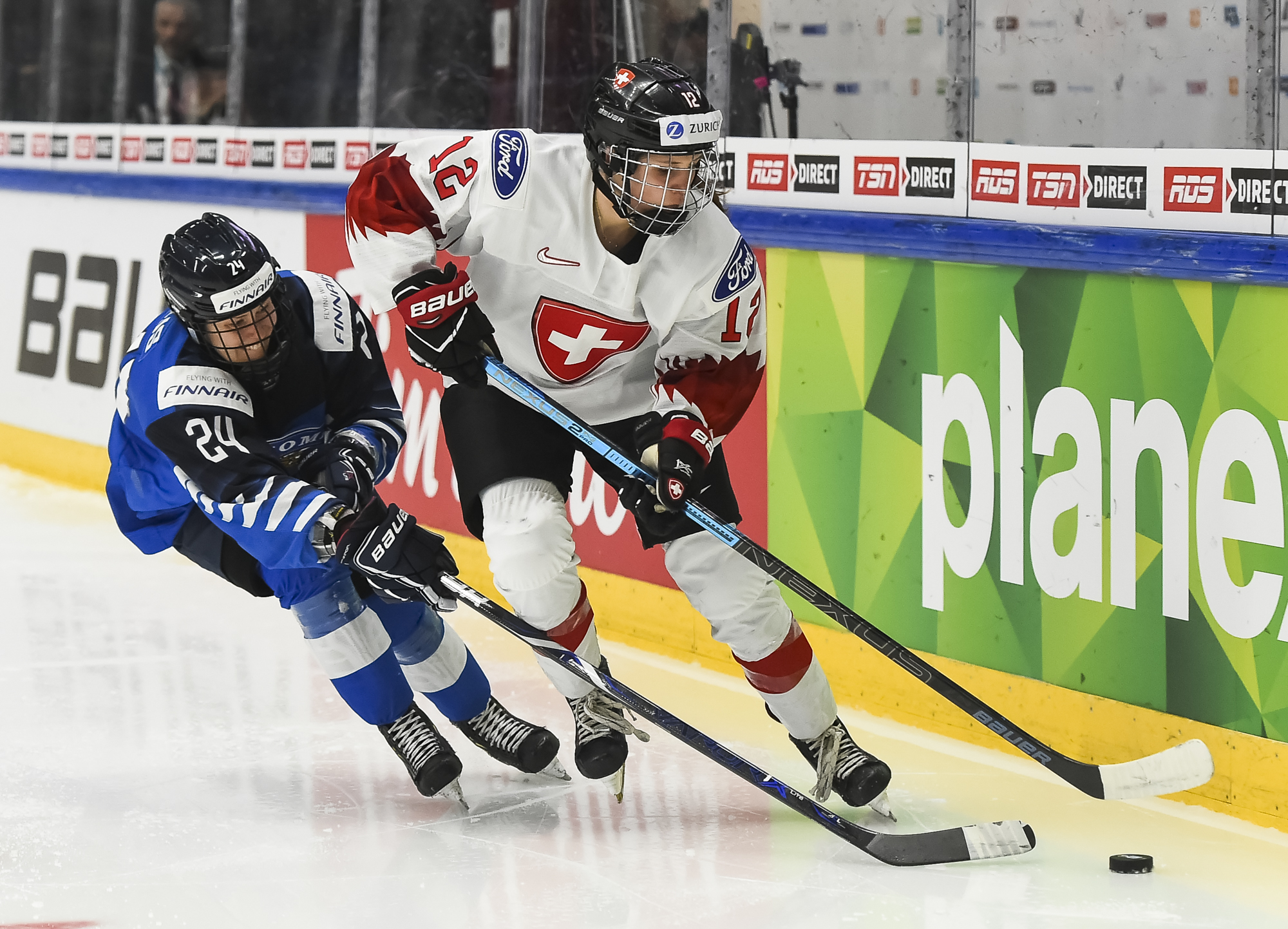 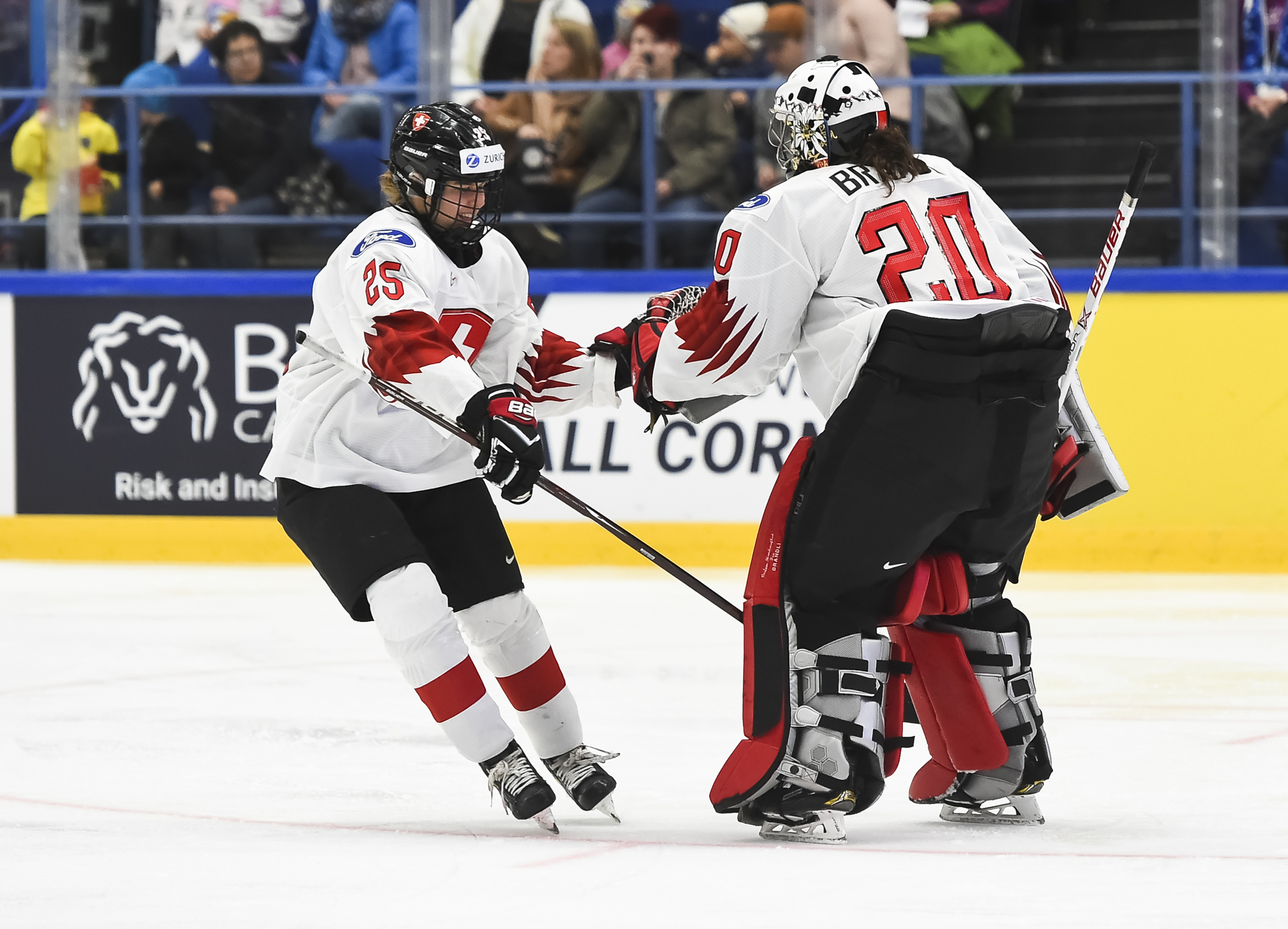 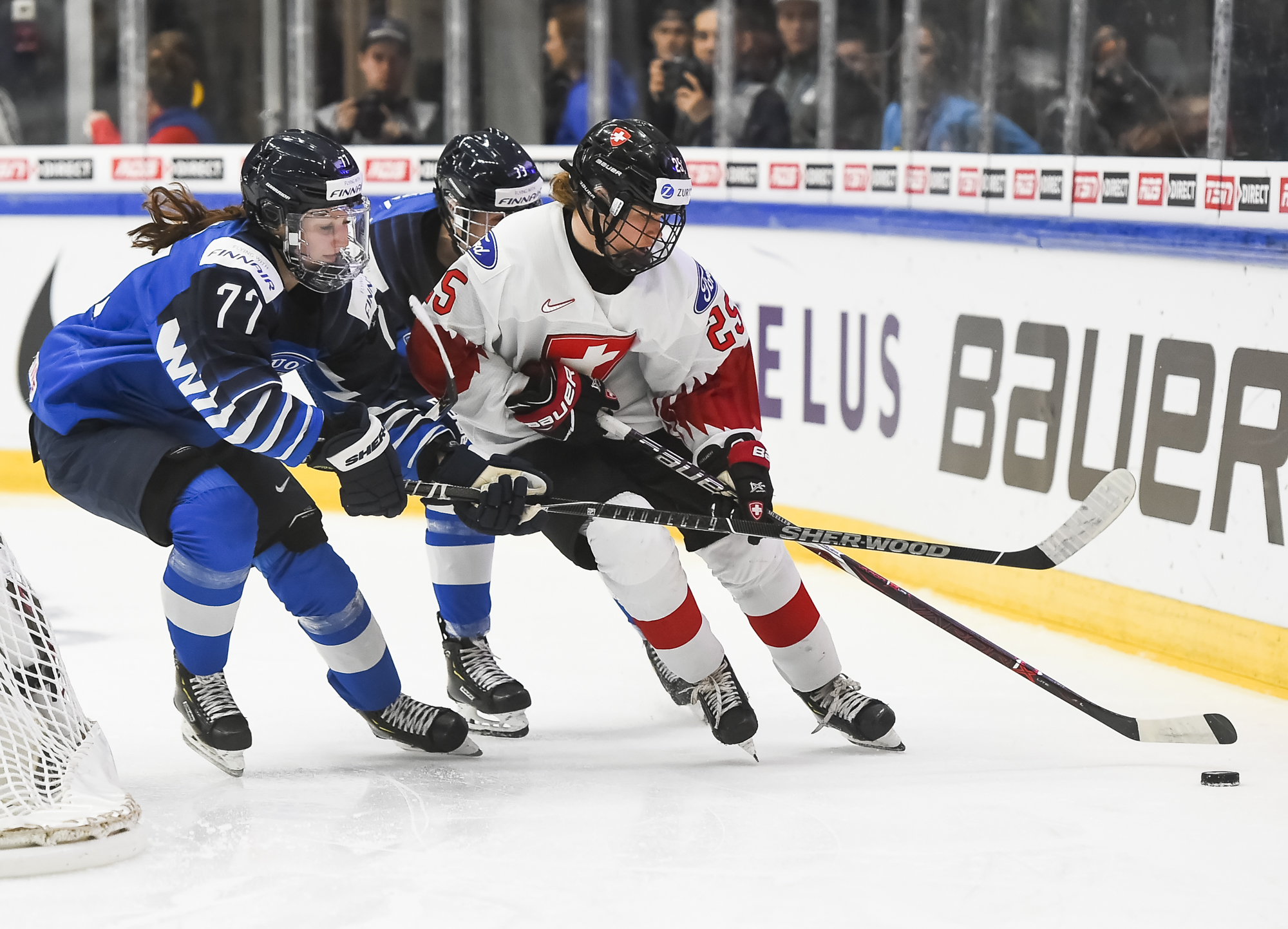 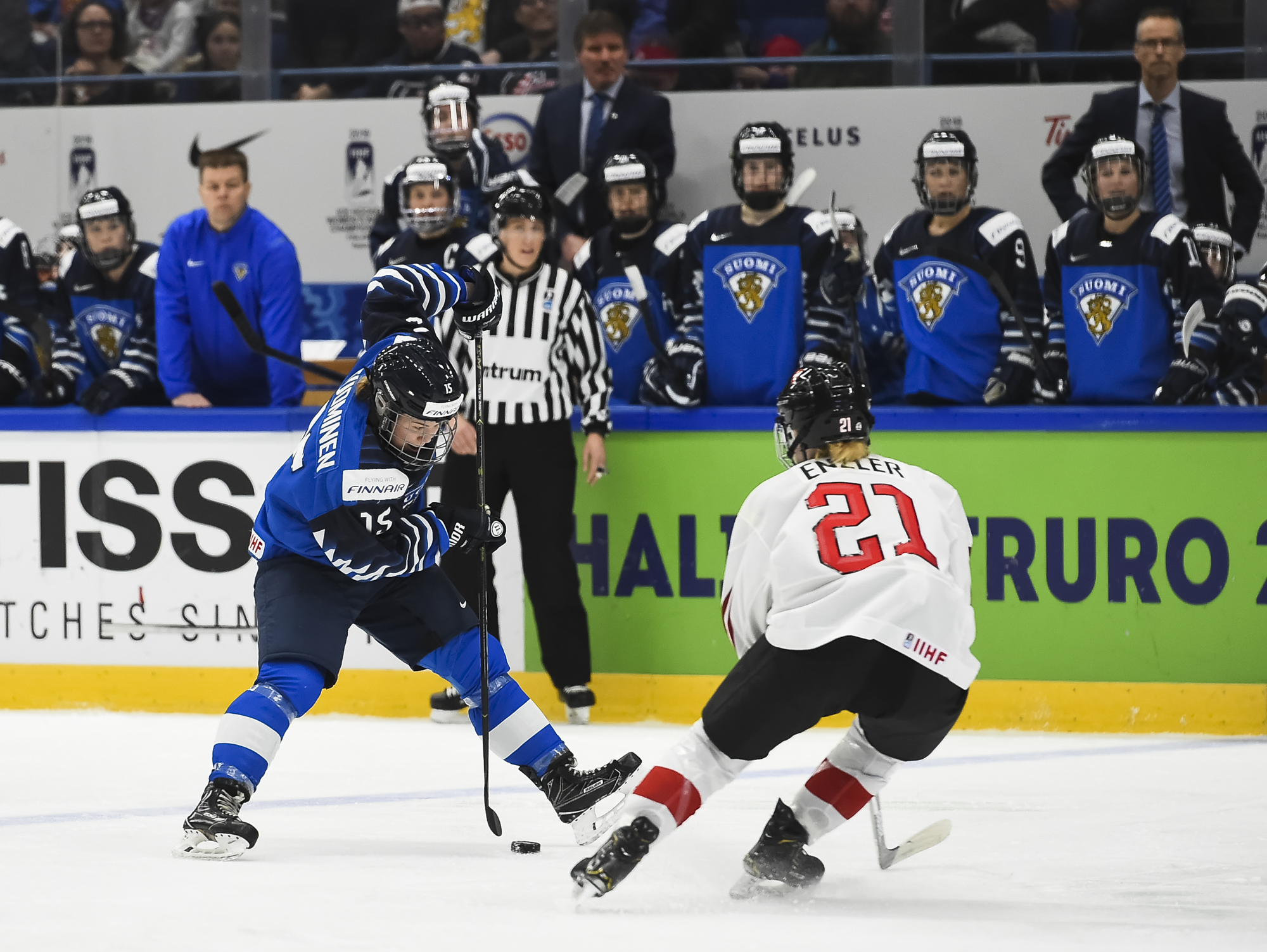 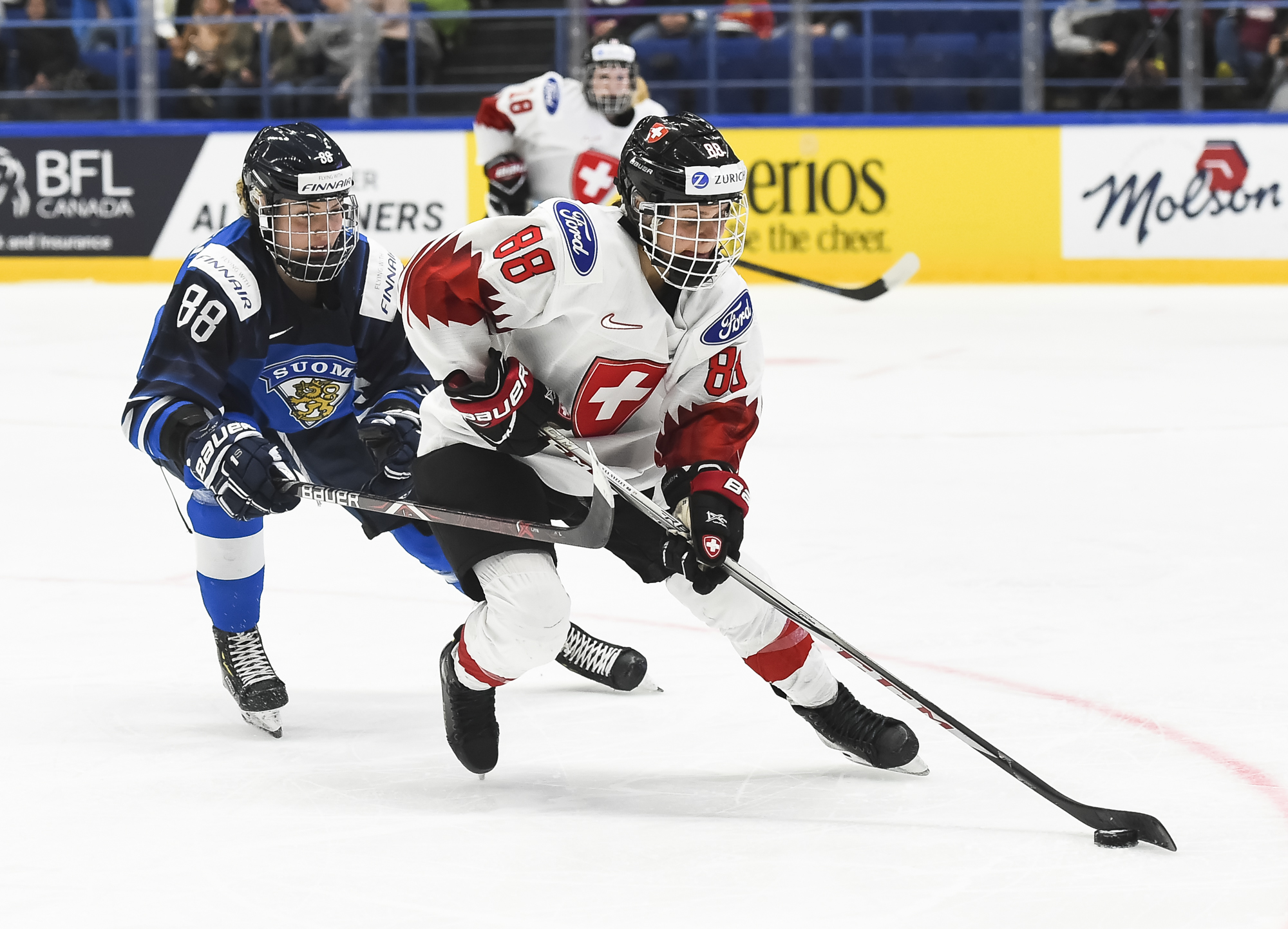 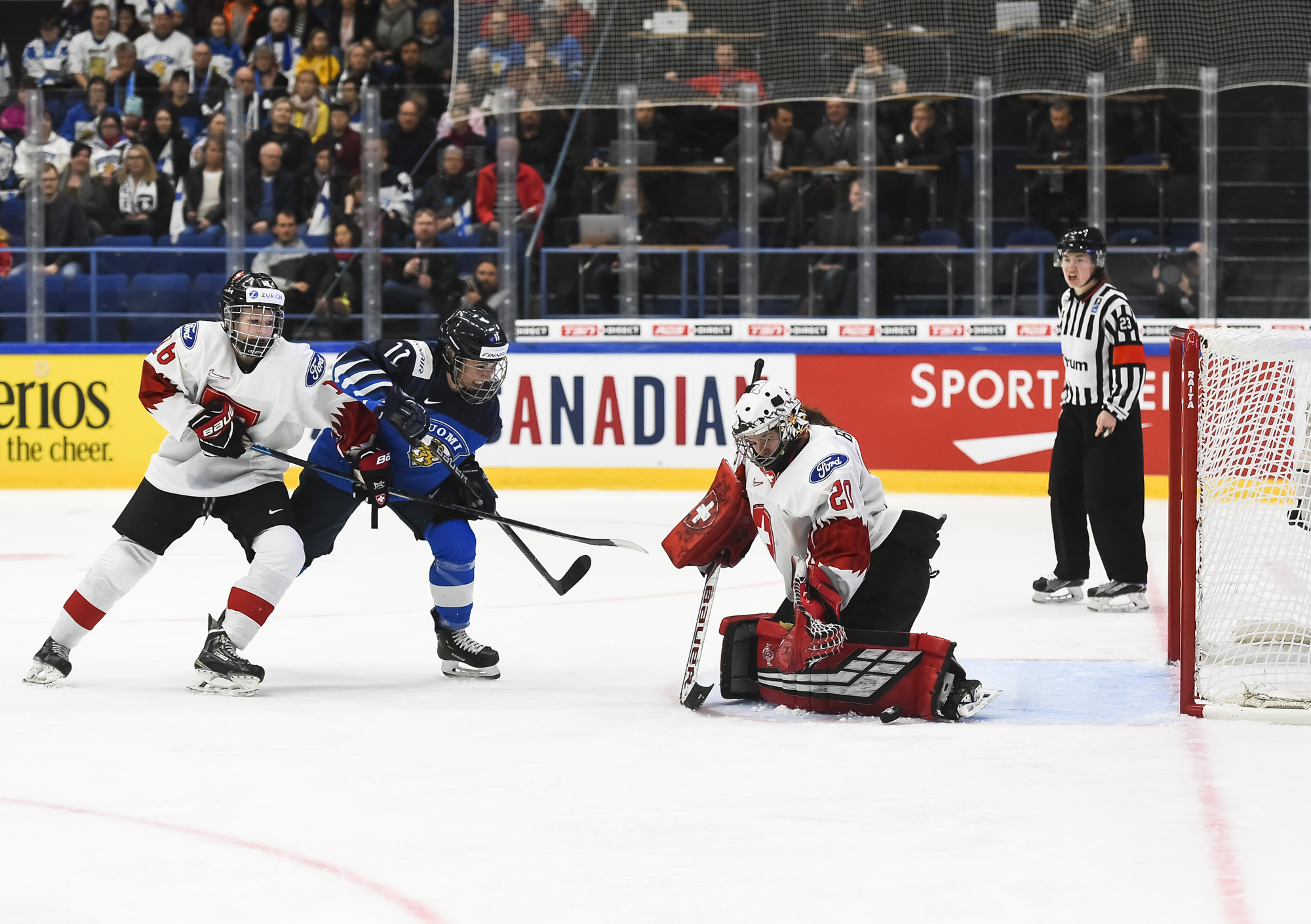 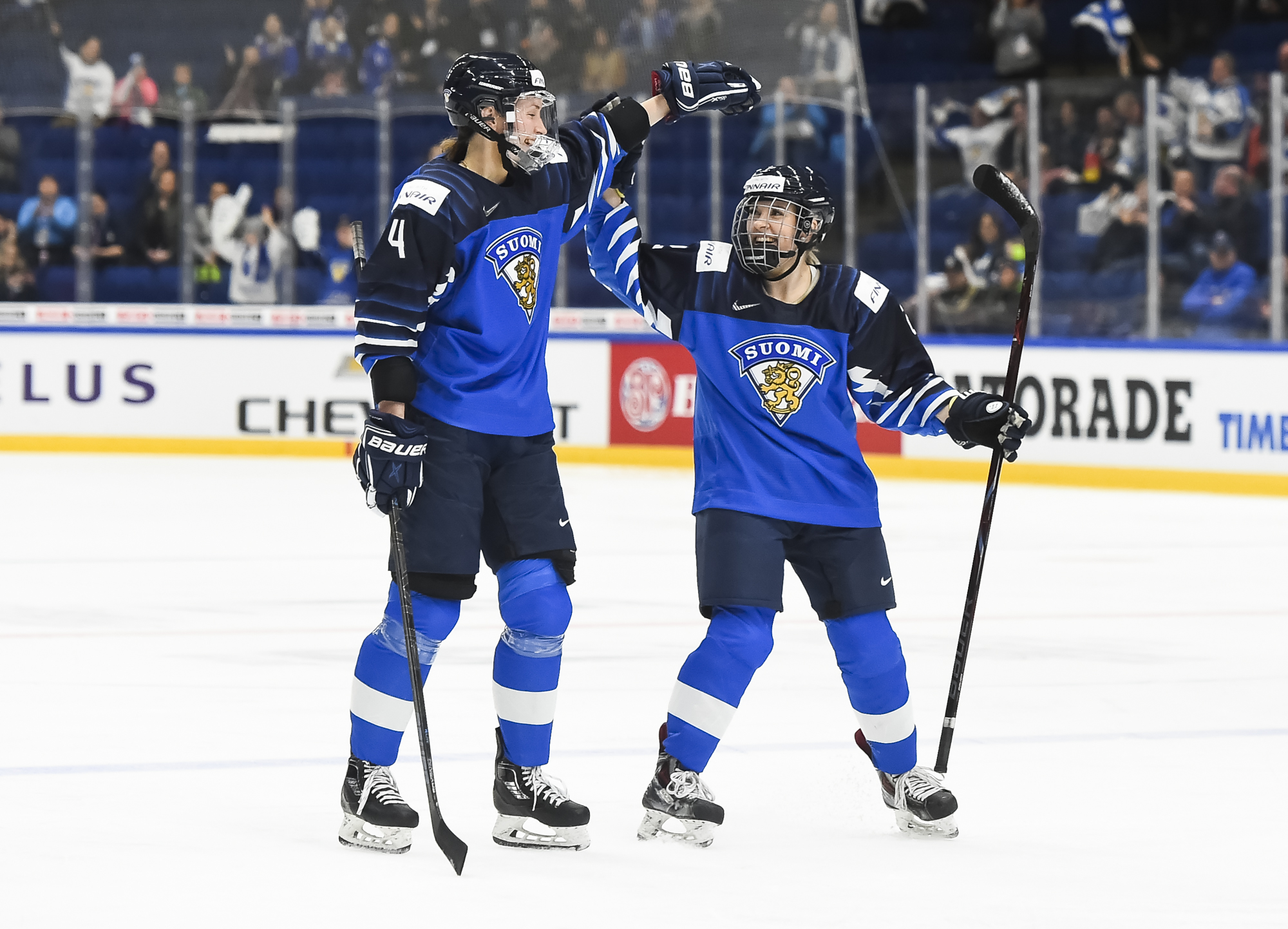 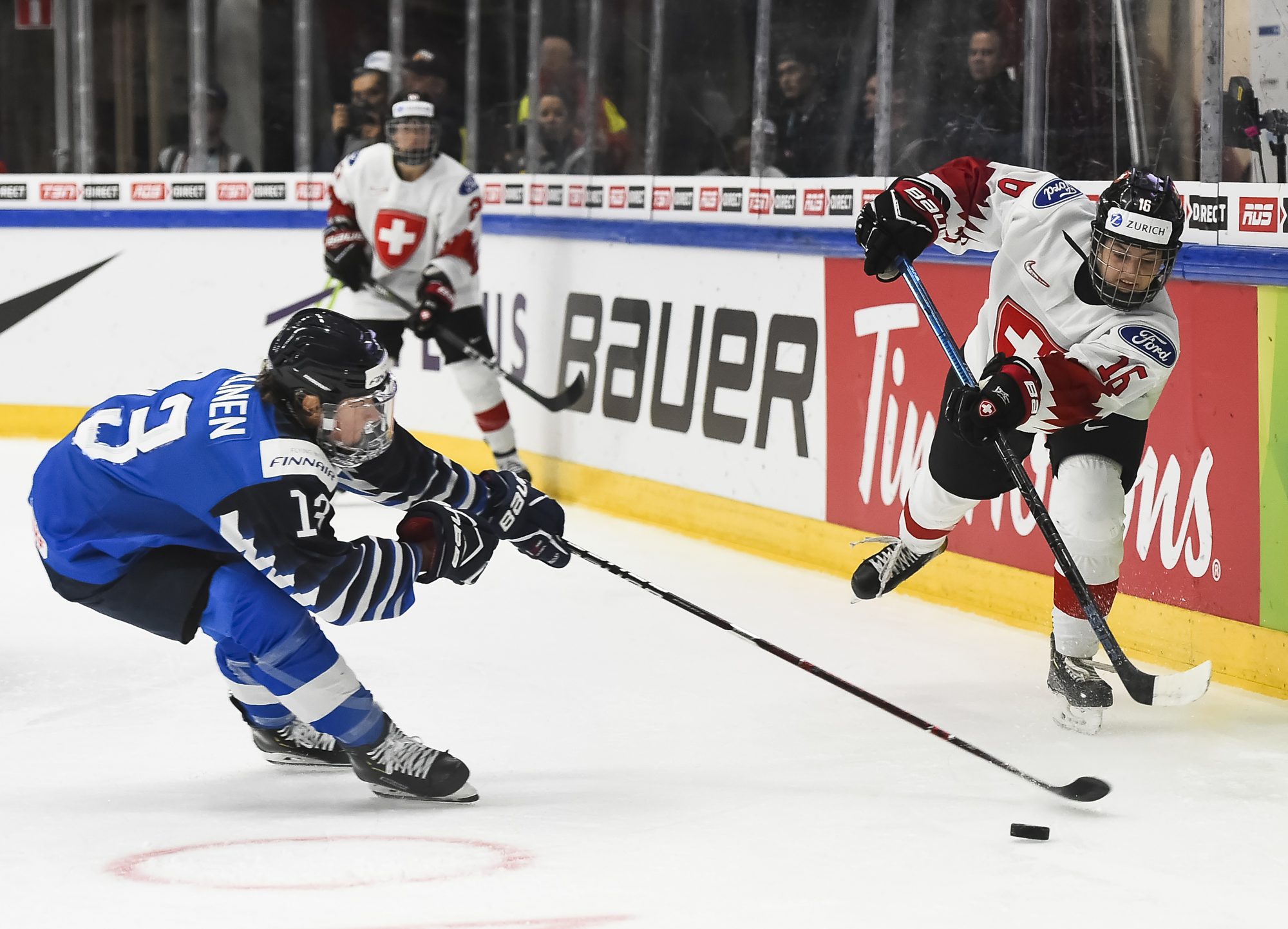 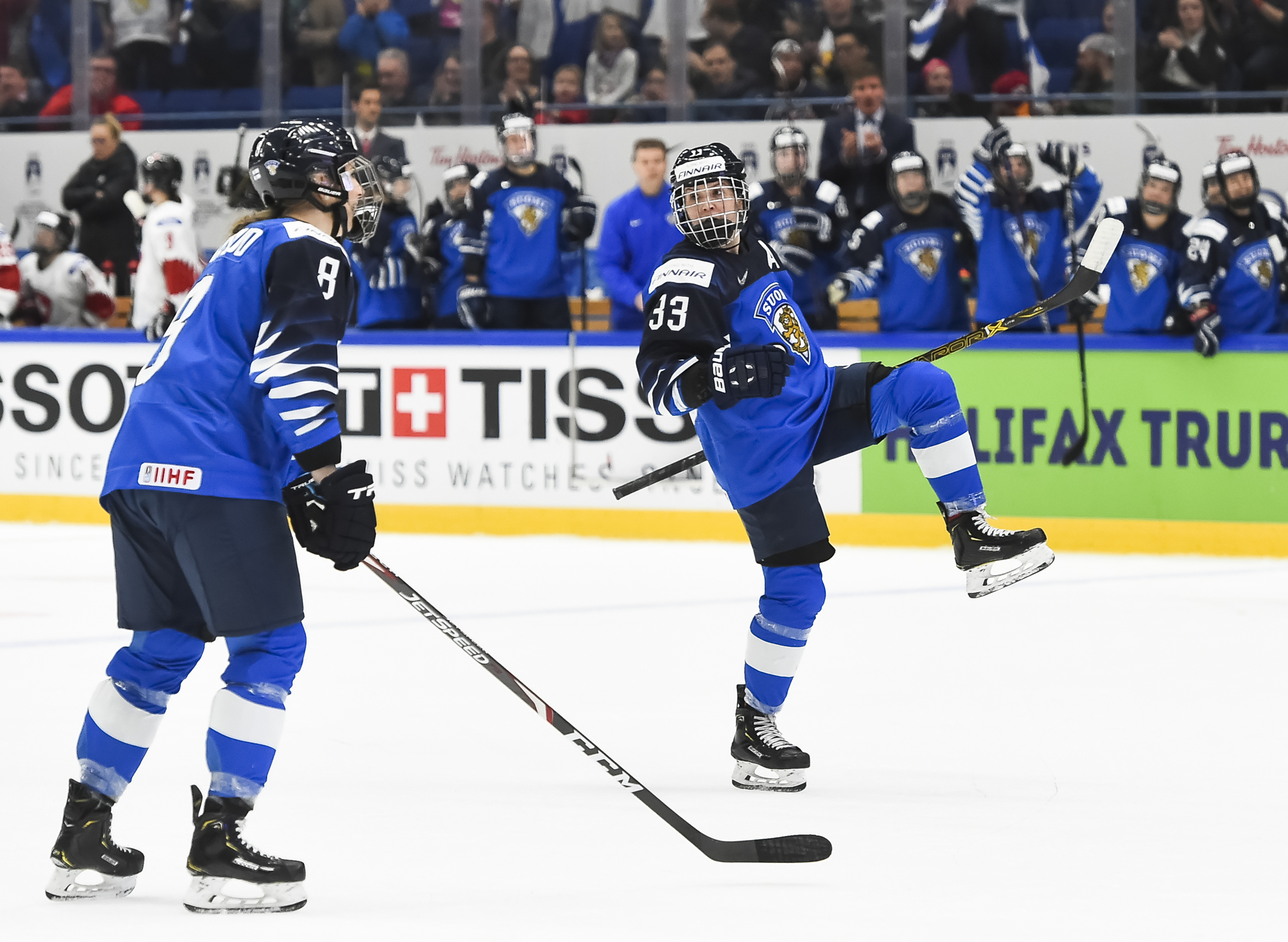 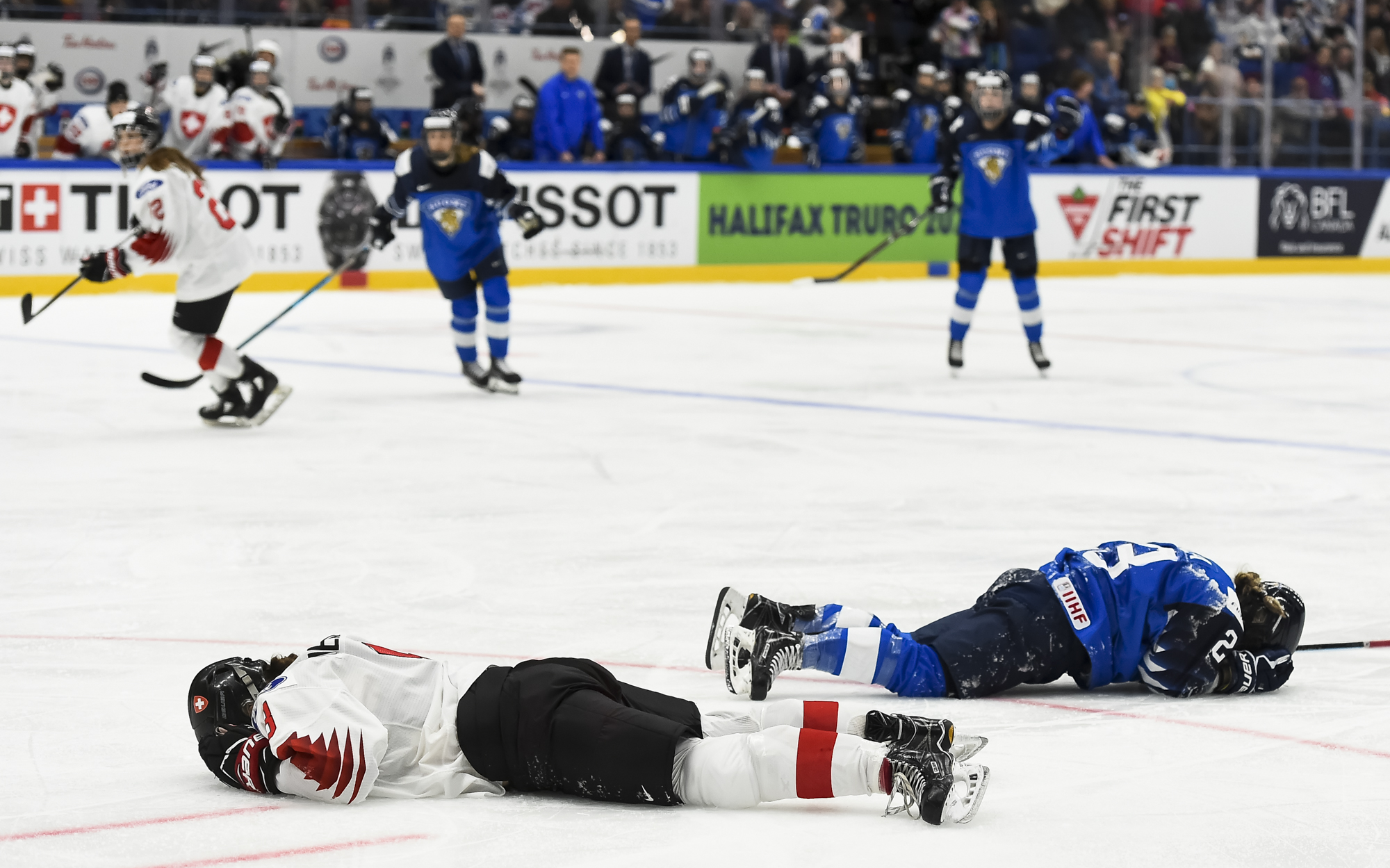 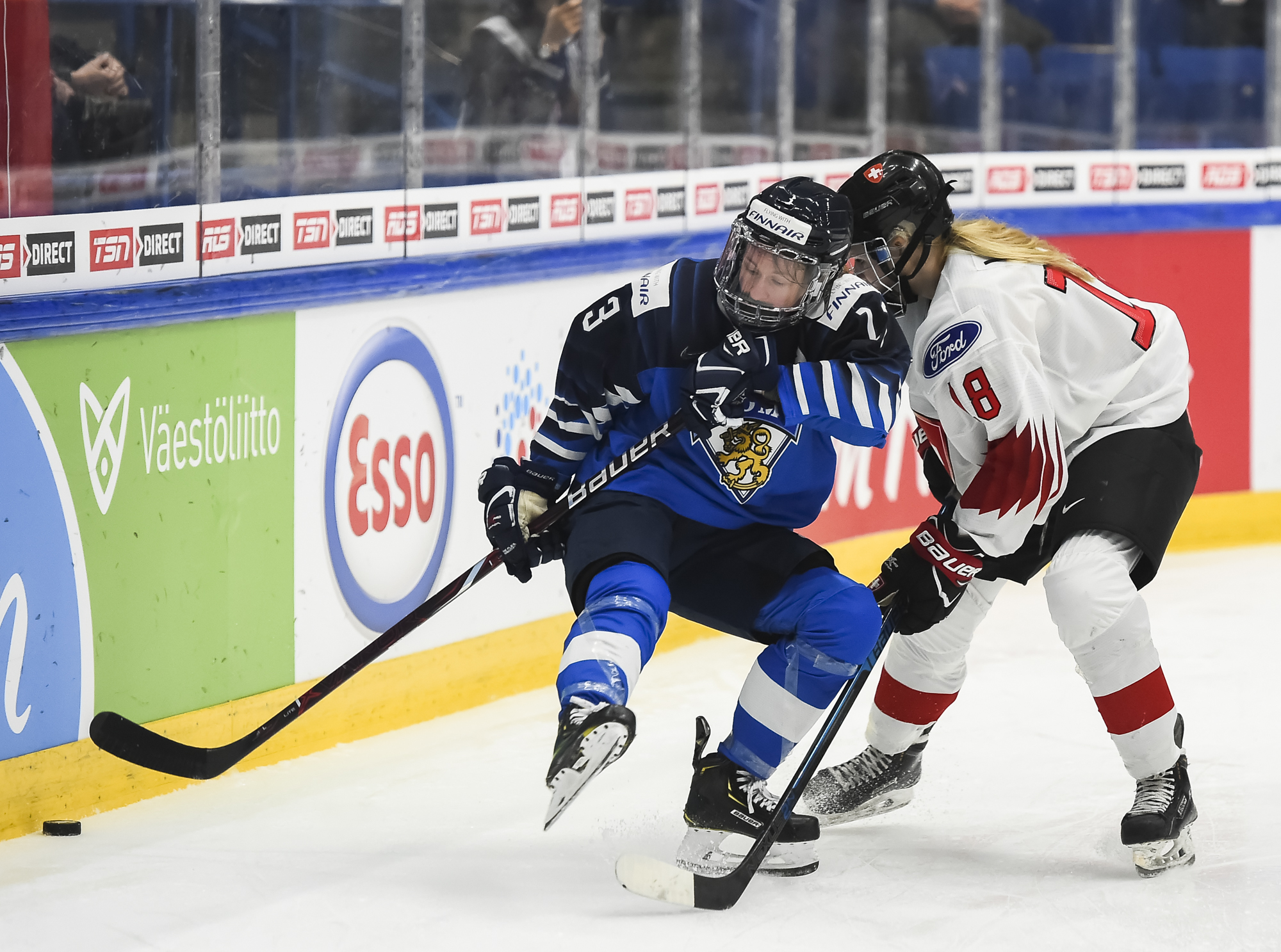 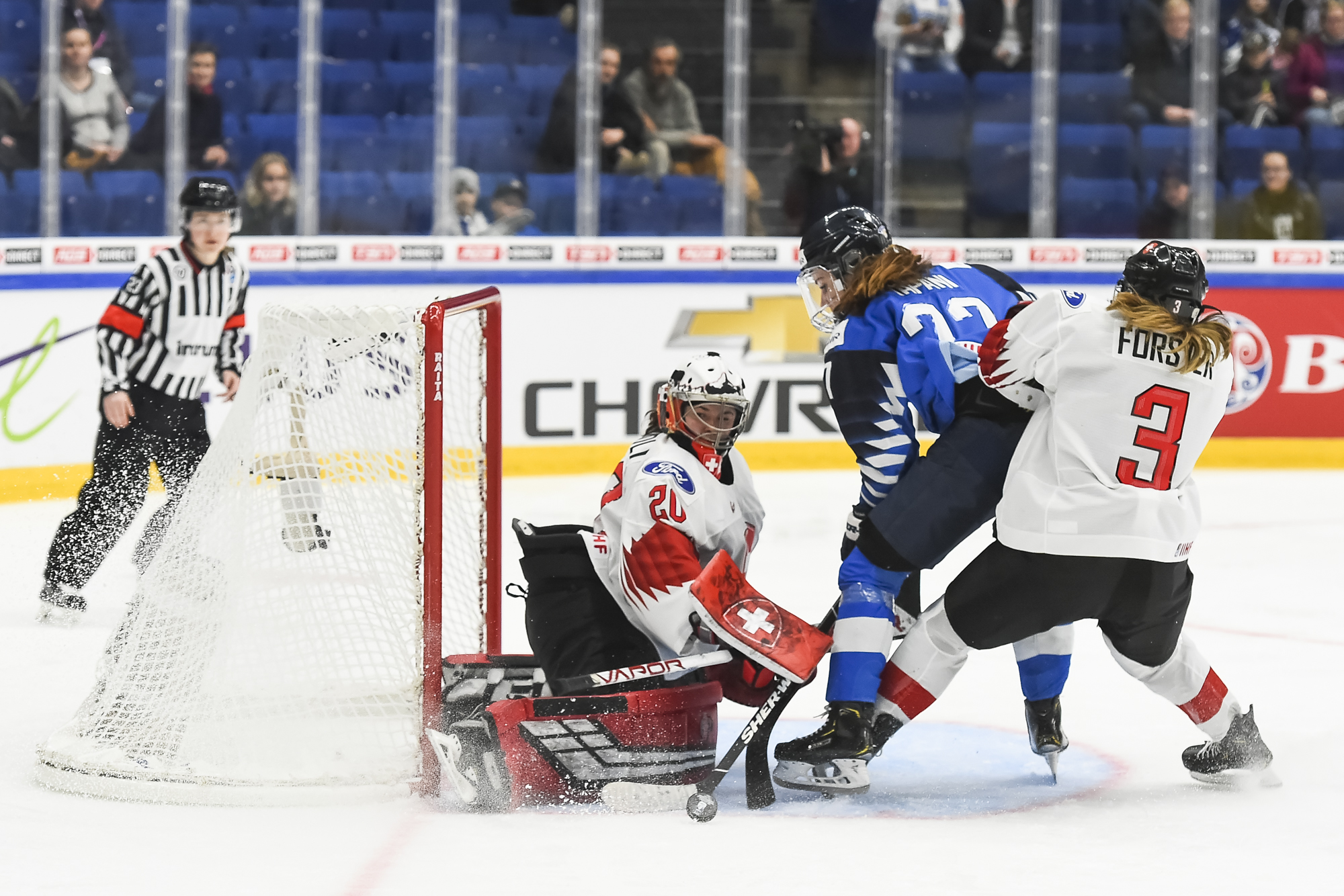 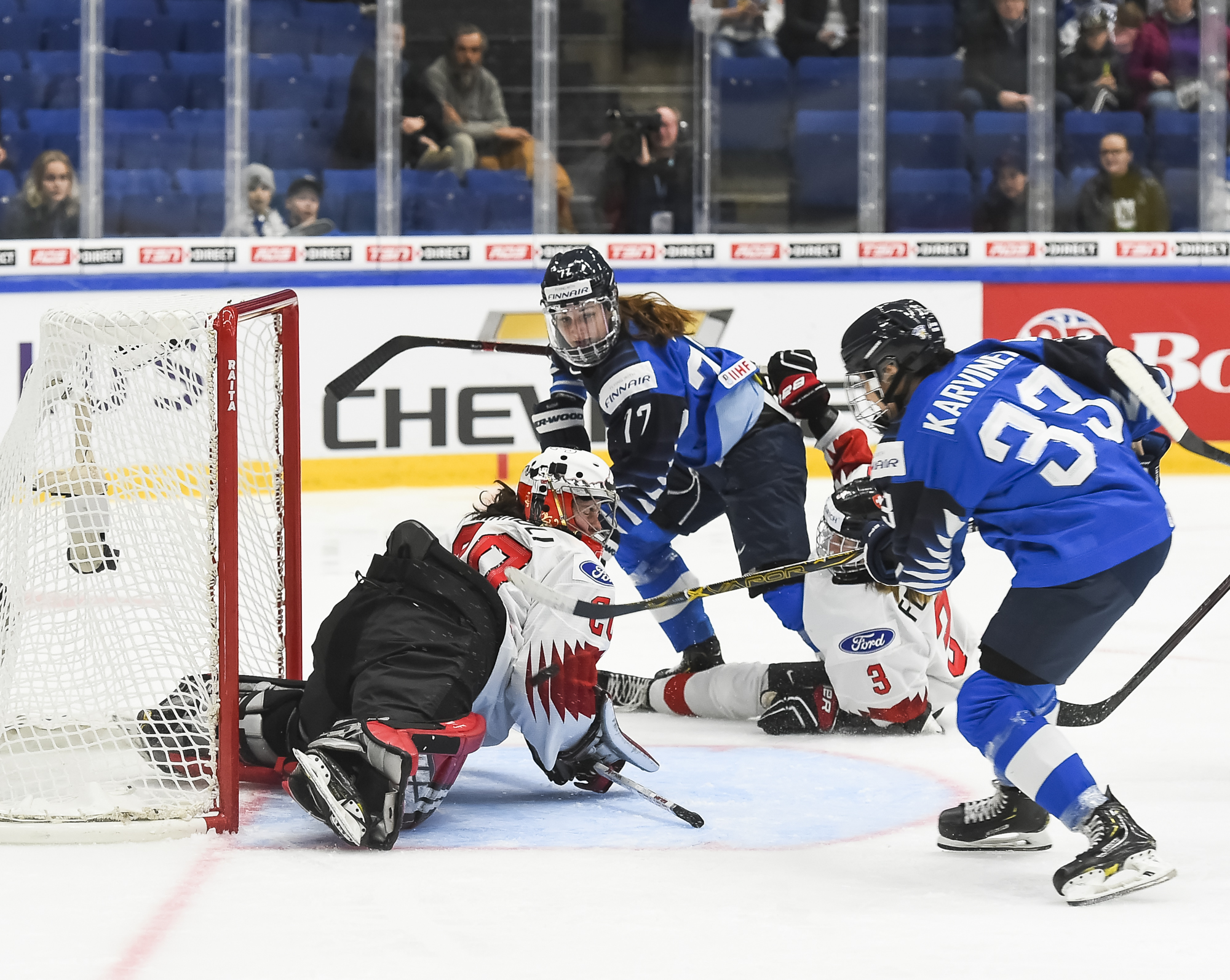 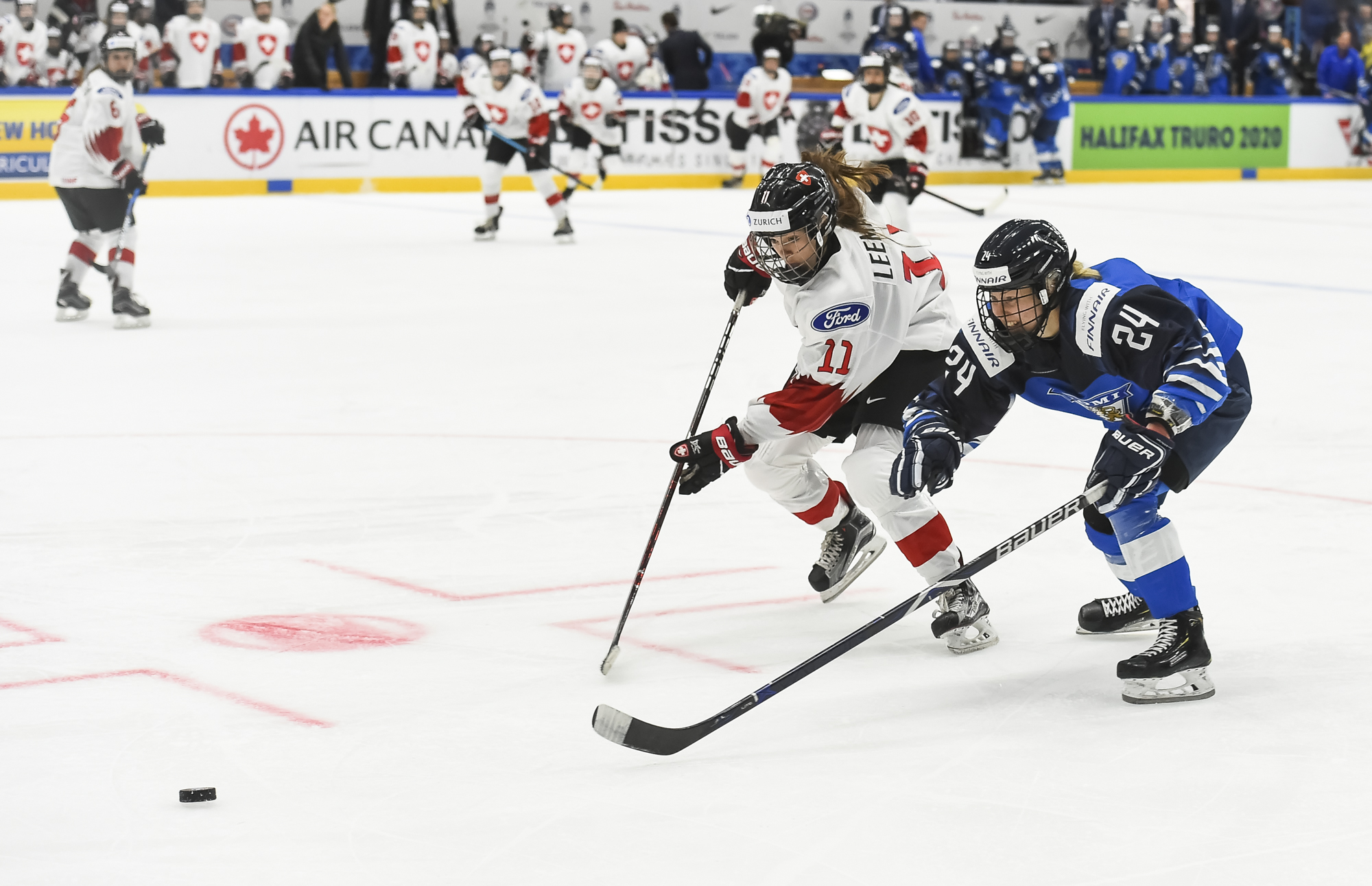 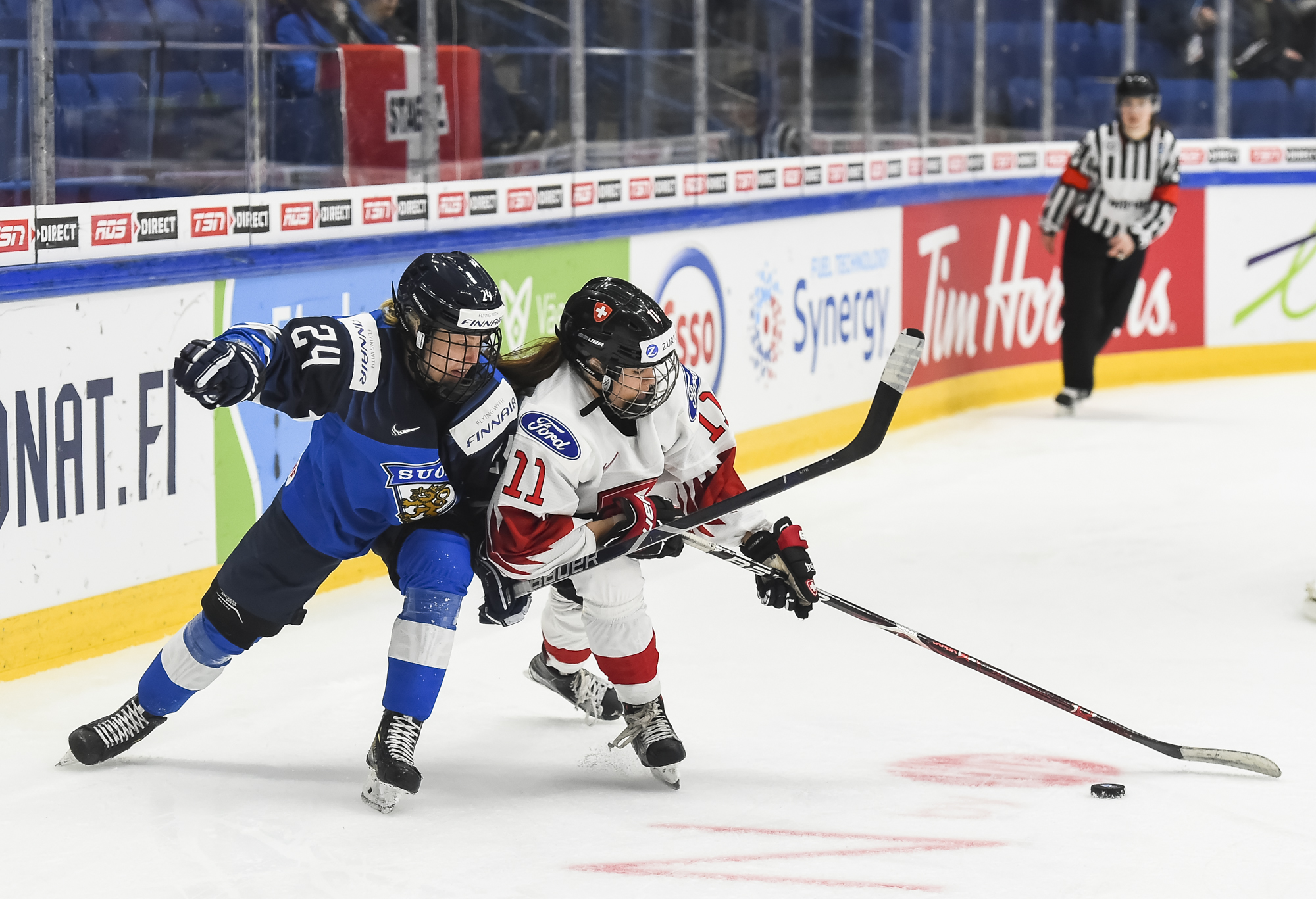 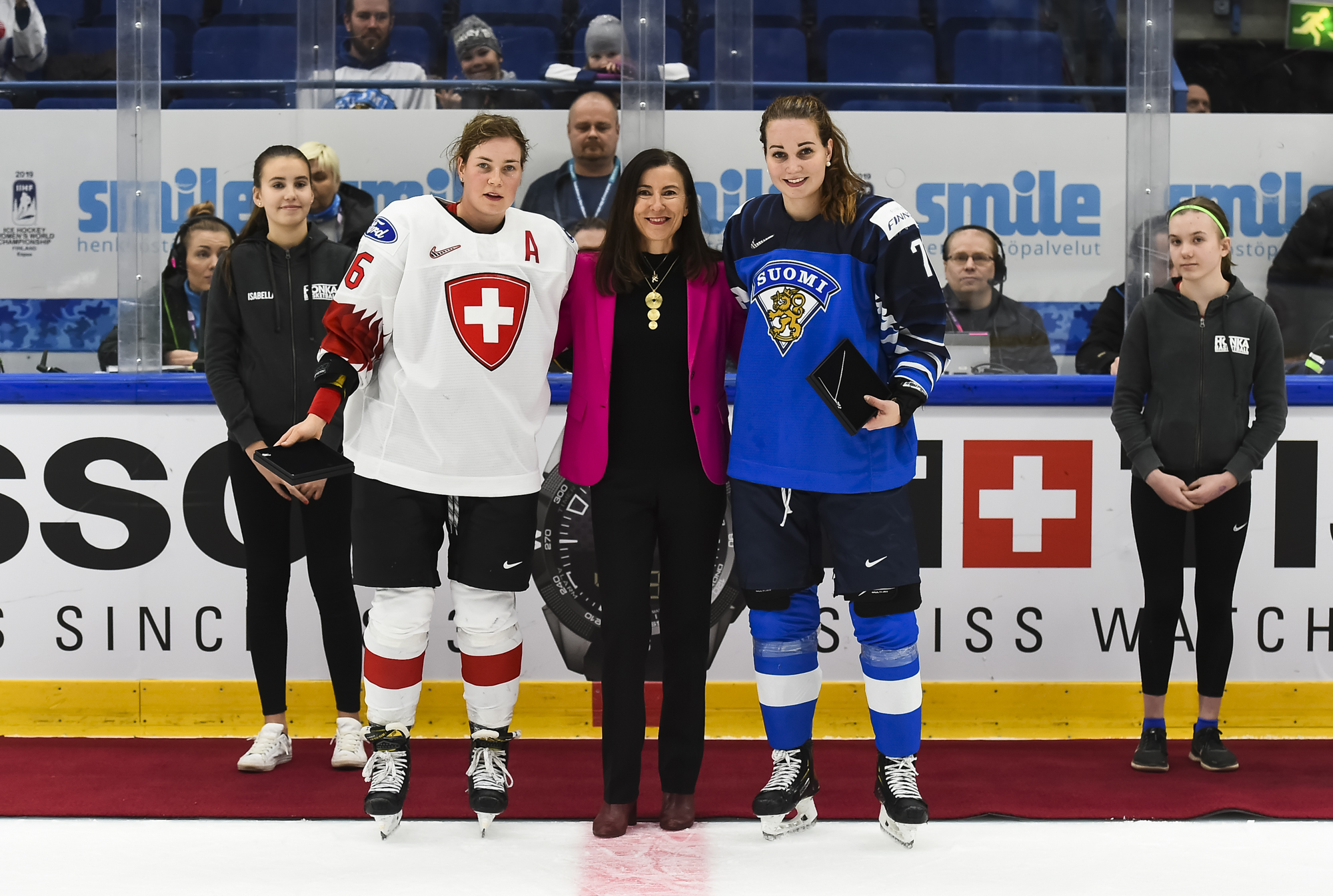 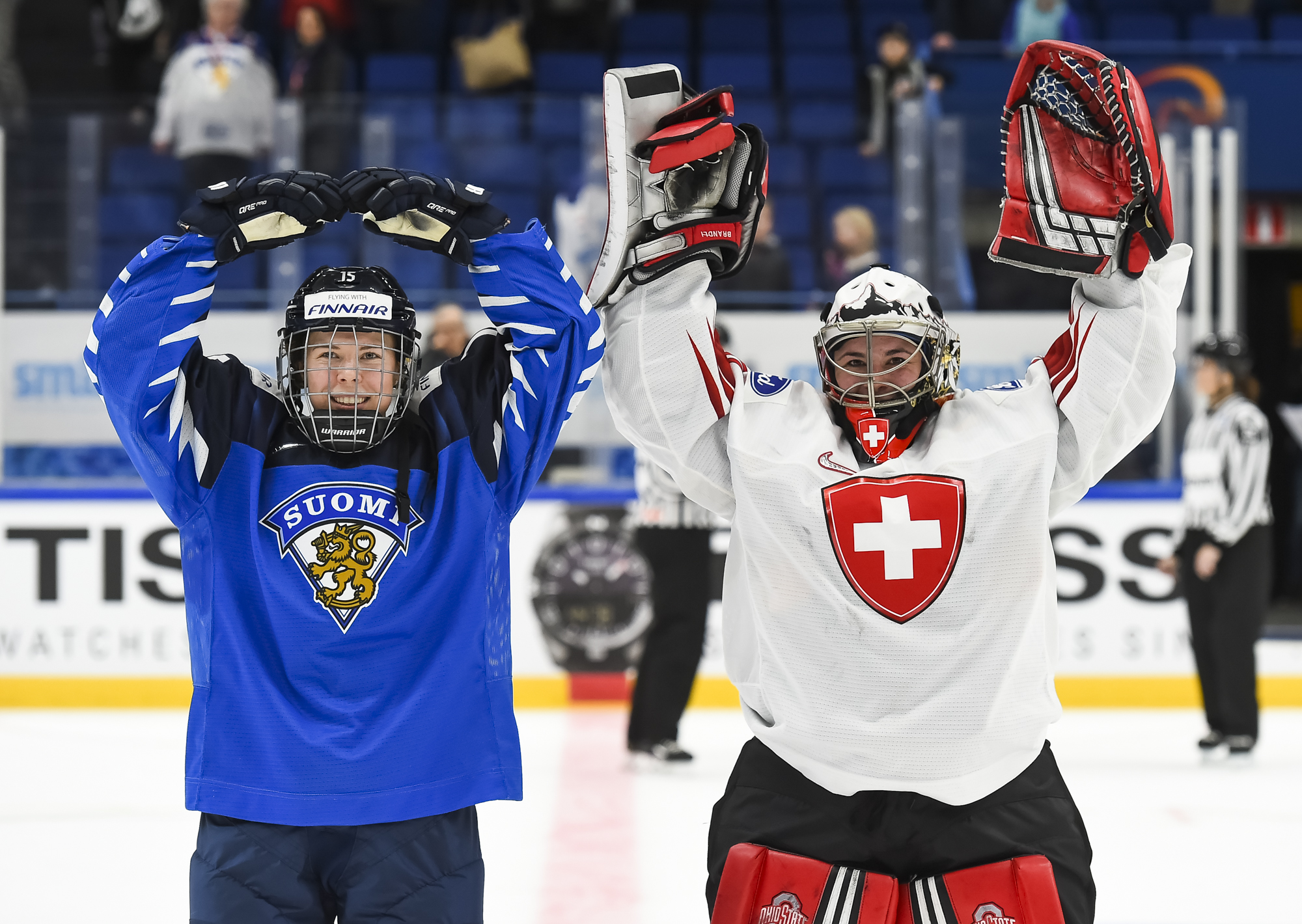 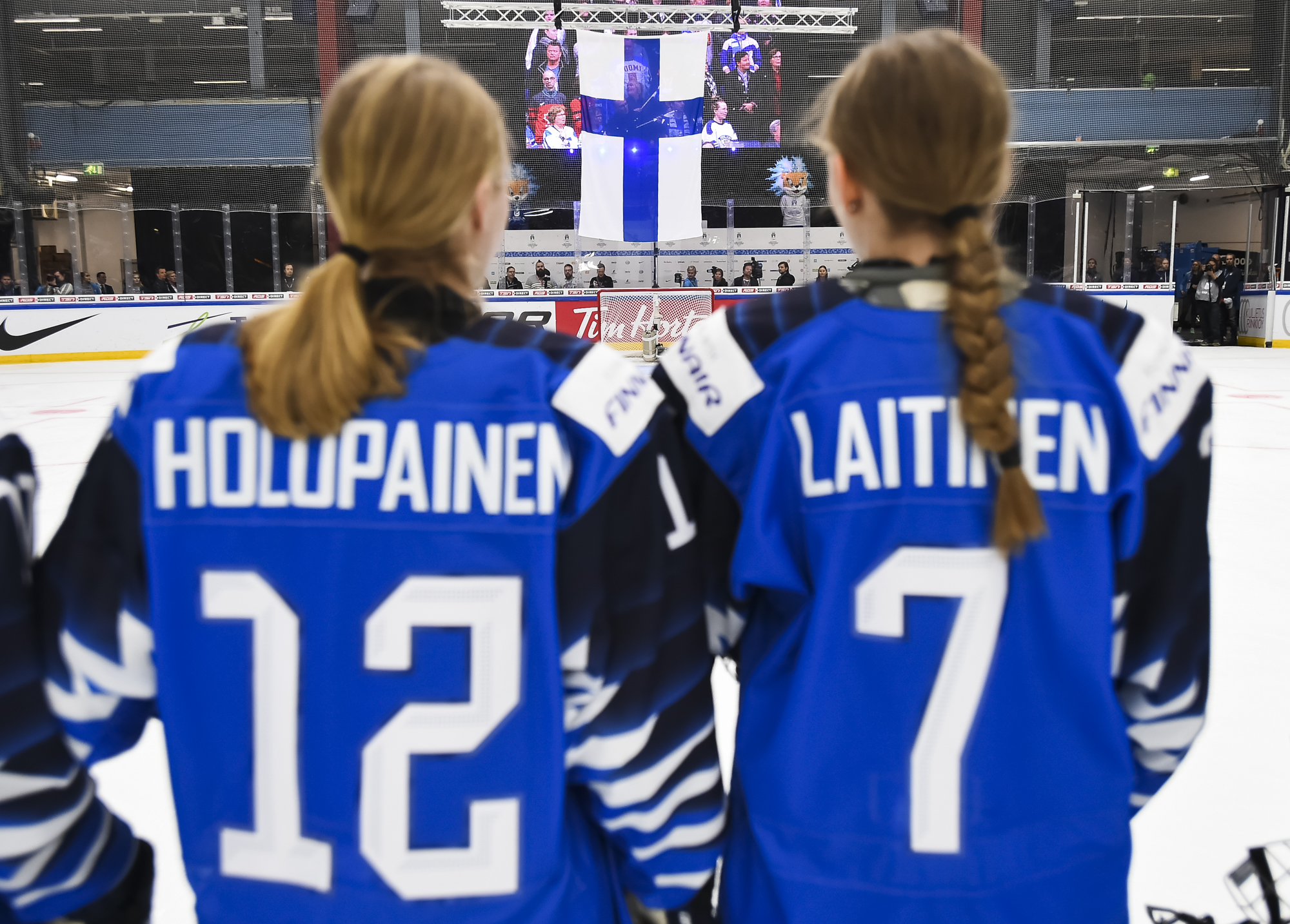 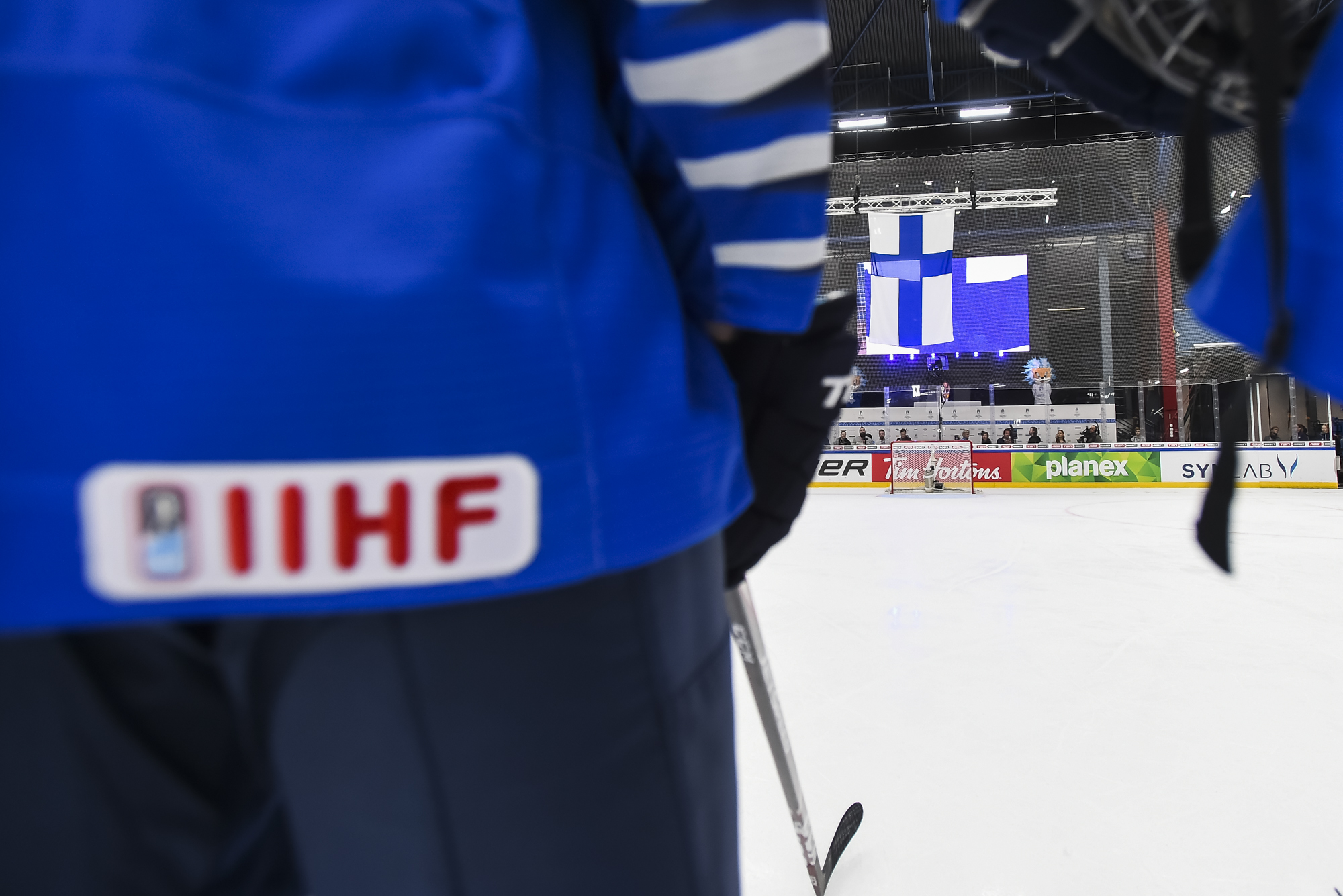 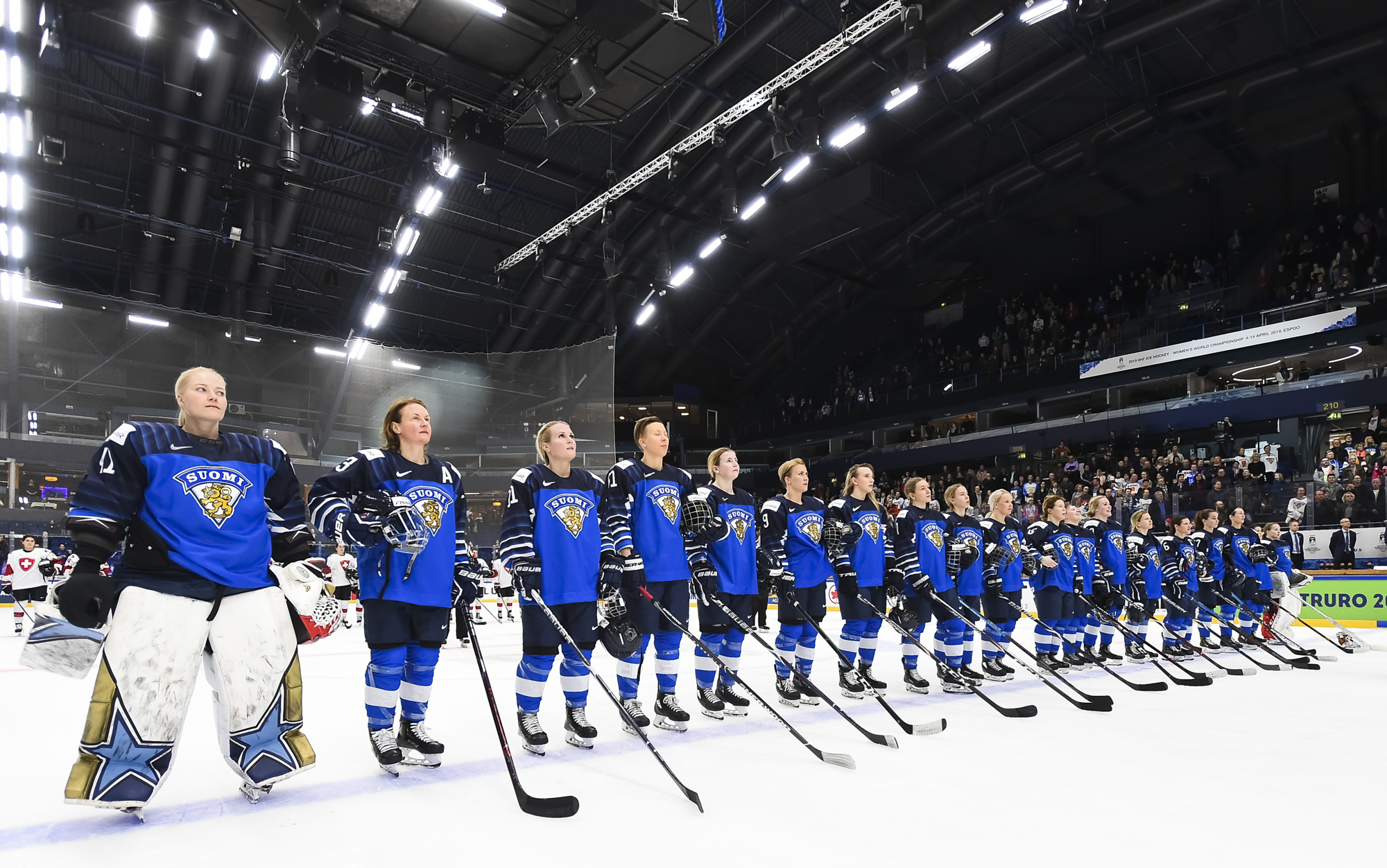 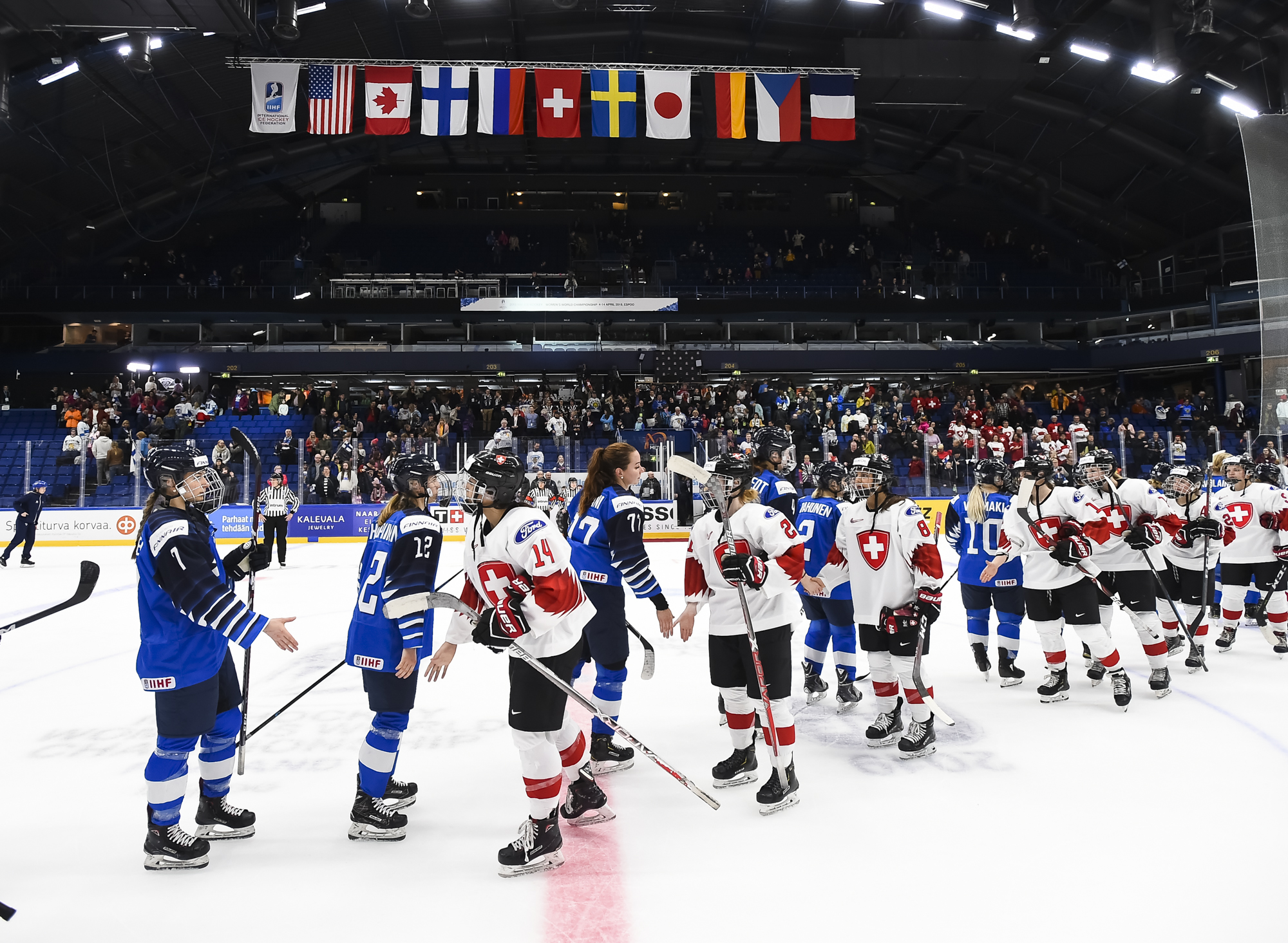