The groups for Tampere and Helsinki are based on the World Ranking taking into consideration organizational wishes by the 2022 IIHF Ice Hockey World Championship Organizing Committee.

Host Finland will play Team USA, the Czech Republic, Sweden, Latvia, Norway, Belarus and Great Britain in Group B in Tampere where the new Tampere Deck Arena will serve as main venue for the event. 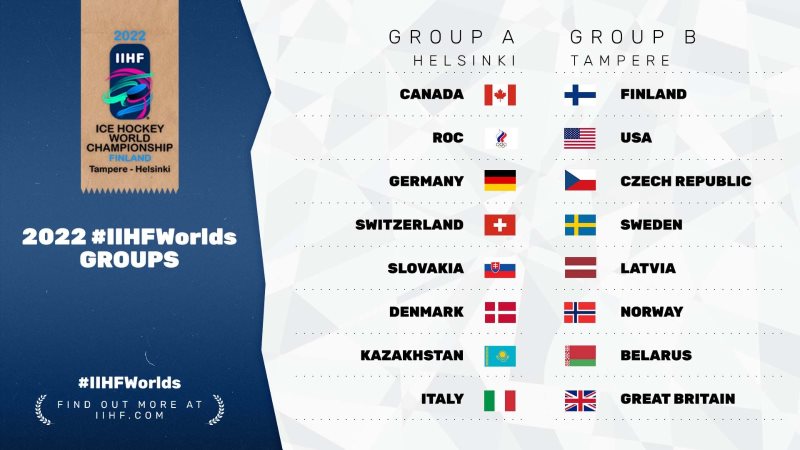 The 2022 IIHF Ice Hockey World Championship will take place in Tampere and Helsinki from 13 to 29 May 2022. Day tickets for the group in Helsinki will go on sale on 2 September. For the group in Tampere the right to buy day tickets will be allocated in a draw starting the same day. Single-game tickets for games not sold out by then will go on sale in February 2022. Click here for more information.

The United States and Germany both went up two spots and come in fourth and fifth place respectively. For Germany it’s the highest placement since the introduction of the World Ranking that takes into consideration the results for the World Championships and Olympics of the last four years.

The Czech Republic (6th) lost one spot while Sweden moved down from fourth to seventh place.

The places 8-12 are taken in the same order as before by Switzerland, Slovakia, Latvia, Norway and Denmark.

Kazakhstan (13th) and Great Britain (16th) both moved up three spots at the expense of other teams in this region of the ranking following their performance in Riga.

For many teams outside of the top division there haven’t been IIHF Ice Hockey World Championship tournaments for two years due to the COVID-19 pandemic that caused tournament cancellations. For a fairer ranking and point distribution, the IIHF Council decided that the points for 2021 in case of tournament cancellations are given according to the ranking position of each team in the 2021 Pre-Championship Report – taking into consideration the results in 2018, 2019 and 2020 – rather than by seeding as in the past.

Related articles
World Men
Worlds in Finland a success on and off the ice
Finnish Ice Hockey Association reports profit of €13.9 million
12 NOV 2022
World Men
Timonen: “What a special day!”
IIHF Hall of Fame inductee celebrates Finnish success
04 JUN 2022
World Men
Canada-Finland: History of a new rivalry
It took a while, but Finland has finally caught up
02 JUN 2022