The 12th and final men’s ice hockey berth at the 2022 Winter Olympics in Beijing went down to the wire between Slovakia and Belarus. Before a sometimes delirious, often nervous, partisan crowd of 7,105 – the maximum allowed under public health regulations – at Bratislava’s Ondrej Nepela Arena, Slovakia won 2-1 to gain the spot.

In fact, the Slovaks only needed one point to qualify, and that’s essentially what they got, with Libor Hudacek scoring the game-winning goal into an empty net as Belarus went for it all in the late going.

“At the last couple World Championships, I think we should have won more games that we did but we found ways to lose close games,” said Slovak head coach Craig Ramsay. “This time, in a very tough game, we found a way to win.”

“Today was a tight-checking game like we knew it would be,” said Belarusian head coach Craig Woodcroft. “It was a very close game. Both teams were really hard to play against, but it wasn’t quite enough for us, and it’s upsetting, I won’t lie. It’s difficult, considering how much the players, the staff, and management have done in order to achieve a better result.”

With the stakes so high, it’s no surprise that the teams came out full of energy, but Belarusian defenceman Sergei Sapego got carried away when he checked Juraj Slafkovsky from behind into the boards at 4:05. Sapego was assessed a major penalty and game misconduct and put enormous pressure on his team’s penalty-killing units, which had already had to kill off one penalty early on.

“The loss of Sergei greatly affected the team's game,” said Woodcroft. “It was the result of an undisciplined play and put us in an uncomfortable position at the start of the game, and the guys got rattled a bit.”

It took little time for the Slovaks to strike, with captain Marek Hrivik from the blueline setting up former Leksands IF linemate Peter Cehlarik for the one-timer that beat Danny Taylor over the glove to the near side.

“This was our ‘go’ thing in Sweden last year when we played together on the power play and we tried to use that again tonight,” said Hrivik.

“It was nice to get a chance to play together again – it’s a lot of fun,” Cehlarik said about playing with Hrivik. “I think we’ve played about 70 games together over the past year. Marek was on the corner point and we’ve worked a lot on high one-timers on the power play and it worked out again.”

There was still 4:27 to go in the five-minute penalty, but if there was any relief for Belarus, it was that a double-minor for high-sticking to Adam Ruzicka negated the last 2:03 of the major. Slovakia outshot Belarus 18-6 in the opening period but, thanks to the netminding of Taylor, it remained a one-goal game at the intermission.

And just over a minute into the second period, the game was tied. Shane Prince spun away from a check in the corner and fed the puck out front, where a wild scramble ensued, and captain Yegor Sharangovich was apparently the last Belarusian player to touch the puck before it crossed the goal line.

“I think after they got that one goal we backed off a little bit and kept back a little bit when we should have kept attacking,” said Cehlarik.

In general, the second period was played more cautiously than the first but there were chances – the best going to Slovakia’s Kristian Pospisil, who in the 28th minute blocked a shoot-in attempt at his own blueline and was off to the races. In alone on Taylor, he interestingly chose to wind up and take a slap shot, which didn’t fool the Belarusian keeper.

The more time that passed, the less margin for error there was on either side, and the more nervous the fans in Bratislava became. As long as the game remained tied, Slovakia was okay, but just one goal against could put them in deep trouble and with each shot on Branislav Konrad, the Slovak fans held their collective breath.

“We knew they were going to push back,” said Hrivik. “They’ve got a good team over there with some high-end skilled players and we knew they weren’t just going to let this go by. They pushed us back a little bit but we tried to hold on and keep ouselves calm and just stick to our gameplan and we’re happy we got it done.”

As the third period moved into its last five minutes, Belarus began to increase the pressure, and Konrad had to be sharp to turn away a Geoff Platt blast through a crowd.

With under three minutes to go and play headed into the Slovak end, Woodcroft decided to pull Taylor for a sixth attacker. The move backfired as Hudacek picked up the puck at the hashmarks and knew exactly what he was going to do. He stickhandled past one Belarusian along the boards, gained centre and fired the game-winning goal into the empty net with 2:17 to play.

“During the last power break, we said on the bench that if we got control of the puck, we would remove the goalie with at least two and a half minutes left,” said Woodcroft. “That was our original plan. But, unfortunately, we lost the battle for the puck and gave up an empty-net goal.”

“When that shot went into the empty net, I didn’t realize there was still two minutes left so I grabbed (Hrivik) and said, ‘Make sure everyone knows there’s still lots of time left’,” Ramsay smiled.

“It’s a huge thing for me to be part of this and to see our country go back to the Olympics, where we belong.” 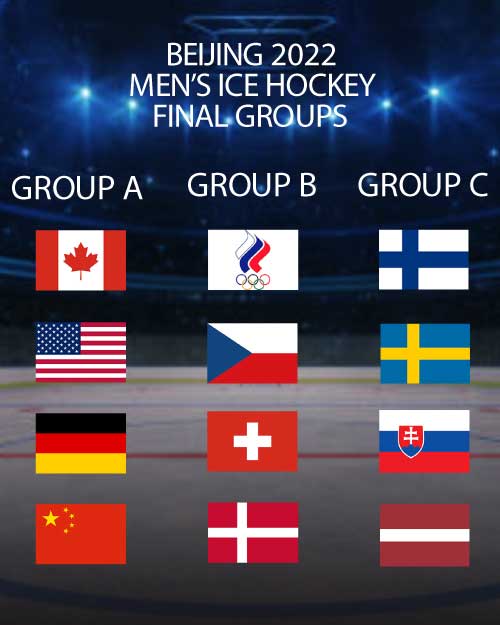