Slovaks: “We made history”
The Slovak players and staff celebrate with a parade through Bratislava.
photo: Andrej Galica
share

The Slovak men’s ice hockey team is due to arrive in Bratislava today to what will surely be a heroes’ welcome after its historic bronze medal victory, with a public celebration in the centre of town planned for Tuesday at 15:30 local time. It’s a moment the players have been anticipating since their 4-0 victory over Sweden at the Olympic bronze-medal game in Beijing on Saturday. The Slovak people just as excited about their arrival.

“Just come with us to Slovakia and let's see what is happening in Slovakia right now,” forward Kristian Pospisil told journalists after the game. “Go watch and you will know what it means right away for everybody, not just for hockey people.”

“We made history,” said forward Samuel Takac, who scored a big goal in the game. “I don't realize it now, but it will perhaps come when I come back to Slovakia and we will see the fans.”

“I have no idea what’s going on at home right now,” said forward Peter Cehlarik. “I can’t wait to call home. I just appreciate all the support we have, even through the rough start. There’s a lot of hype going on there and I can’t wait to see it when we arrive.”

“It will be fun,” said Craig Ramsay, the team’s Canadian head coach. “I am so thrilled for the country. They can have a sense of pride.”

It’s not like Slovakia hasn’t had reasons in the past to be proud of its hockey team. But it’s been a while. In the early 2000s, Slovak hockey hit its peak with a “golden generation” that included Miroslav Satan, Peter Bondra, Zigmund Palffy, Ladislav Nagy, Jozef Stumpel and Lubomir Visnovsky. That group produced three IIHF Ice Hockey World Championship medals in four years, with the crowning achievement a gold medal in 2002 in Gothenburg on Bondra’s late game-winner.

While this is the first ice hockey Olympic medal won by the Slovaks, they’ve come close before. In 2010, Slovakia hadn’t won a medal for a few years but still had a strong team. In Vancouver, they were led by a core that included Pavol Demitra, Marian Hossa and Zdeno Chara. Jaroslav Halak, the team’s 23-year-old goaltender, was having a career-defining year – just two months after the Olympics, he went on to backstop the eighth-seeded Montreal Canadiens to back-to-back NHL Eastern Conference playoff series upsets over Alexander Ovechkin’s Washington Capitals and Sidney Crosby’s Pittsburgh Penguins.

“This medal is also for them,” Pospisil said about the 2010 team. “I am so excited we did it this time. I don't have the words, it is just something amazing. We remember what happened in 2010, but I can't imagine what is going to happen with this medal and what it means for our country.”

Juraj Slafkovsky and Samuel Takac celebrate with their medals after Slovakia's bronze-medal win against Sweden.
photo: Andre Ringuette / HHOF-IIHF Images
The tournament didn’t start great for the Slovaks, who lost their first two games 6-2 to Finland and 4-1 to Sweden. Slafkovsky caught some attention by scoring all three Slovak goals, but the rest of the offence sputtered. However, they finally got going and finished off the group stage with a 5-2 win over Latvia, then came the big one, a 3-2 quarter-final victory over the USA. Captain Marek Hrivik picked a good time to finally score, in the last minute of regulation time to tie it. And then Cehlarik, the Top Forward at last year’s World Championship in Riga, scored the shootout winner.

The Slovaks lost the semi-final but held their own against a disciplined Finnish team coached by Jukka Jalonen, who has led tight-checking teams to gold and silver medals at the last two World Championships. The score was 1-0 until a late empty-netter clinched it.

It was the only game that Slafkovsky, the eventual tournament MVP, didn’t score but he had chances.

“I think we had some offensive chances when we held the puck in their end but, you know, when luck isn’t on your side, like it was the last game, then it’s tough,” Slafkovsky reasoned. “But tomorrow I hope we’ll have luck on our side.”

Asked if it would be tough to get up to play again the following day, he answered: “I don’t think it’s hard. When you think about bringing a medal home, it’s very important to forget this game very soon and focus on tomorrow.”

After Slafovsky finished talking, Finnish coach Jukka Jalonen, stepping up to talk to the media, gave the big guy a pat on the shoulder and said: “Great tournament.”

But the tournament wasn’t over. There was still the bronze medal game against Sweden.

After a scoreless first period, the Slovaks went up 2-0 on a pinball shot by Slafkovsky and then Samuel Takac on the power play. Back in 2010, the Slovaks also took a two-goal lead into the third period of the bronze-medal game. However, Finland rallied for four straight goals and a 5-3 win to claim the medal.

“We were just so excited,” Pospisil said about the mood in the dressing room during the second intermission. “The coaches went over some tactics, what we had to do. We were just trying to be calm throughout the third period and we did an amazing job. They didn't have any chances to get closer, then we scored an empty-net goal, and we were so happy.”

In fact, the Slovaks scored two empty-netters. One by Slafkovsky, his tournament-leading seventh, and one by Pavol Regenda.

“It’s amazing how effective he was,” Cehlarik said about the 17-year-old sensation whose NHL draft stock surely rose. “He’s a great kid. I got to know him last year and tried to help him along the way. He wants to work hard and I’m just happy that he’s coming through. He’s got a bright future.”

In addition to Slafkovsky, goalie Patrik Rybar was also named to the tournament all-star team. bout

“Man, he battled hard to get into the lineup,” Cehlarik said about the goalie, who posted the best goals-against average (0.96) and save percentage (96.58). “That second game against Sweden, he came in the third period and he was big. From then on, I think he dominated.”

“I told them they could beat anybody and in the end, that third period, was one of the best periods ever in all my years in hockey that I have ever seen that everybody put their life on the line to win that game,” said Ramsay, who over the course of three years has transformed the Slovak national team into one where everyone buys into his system.

“I hope this brings a lot of people together back home,” said Hrivik. “As a country we needed this, just from the hockey side. It’s been rough for people for the past few years and I hope this helps everybody get a smile on their face.”

Recent results at youth levels – such as last summer’s Hlinka Gretzky Cup where Slafkovsky and defenceman Simon Nemec led Slovakia’s U18 team to a second-place finish – would seem to indicate there will be more days ahead to smile about Slovak hockey.
Slovakia Olympic bronze celebration in Bratislava (by Andrej Galica) 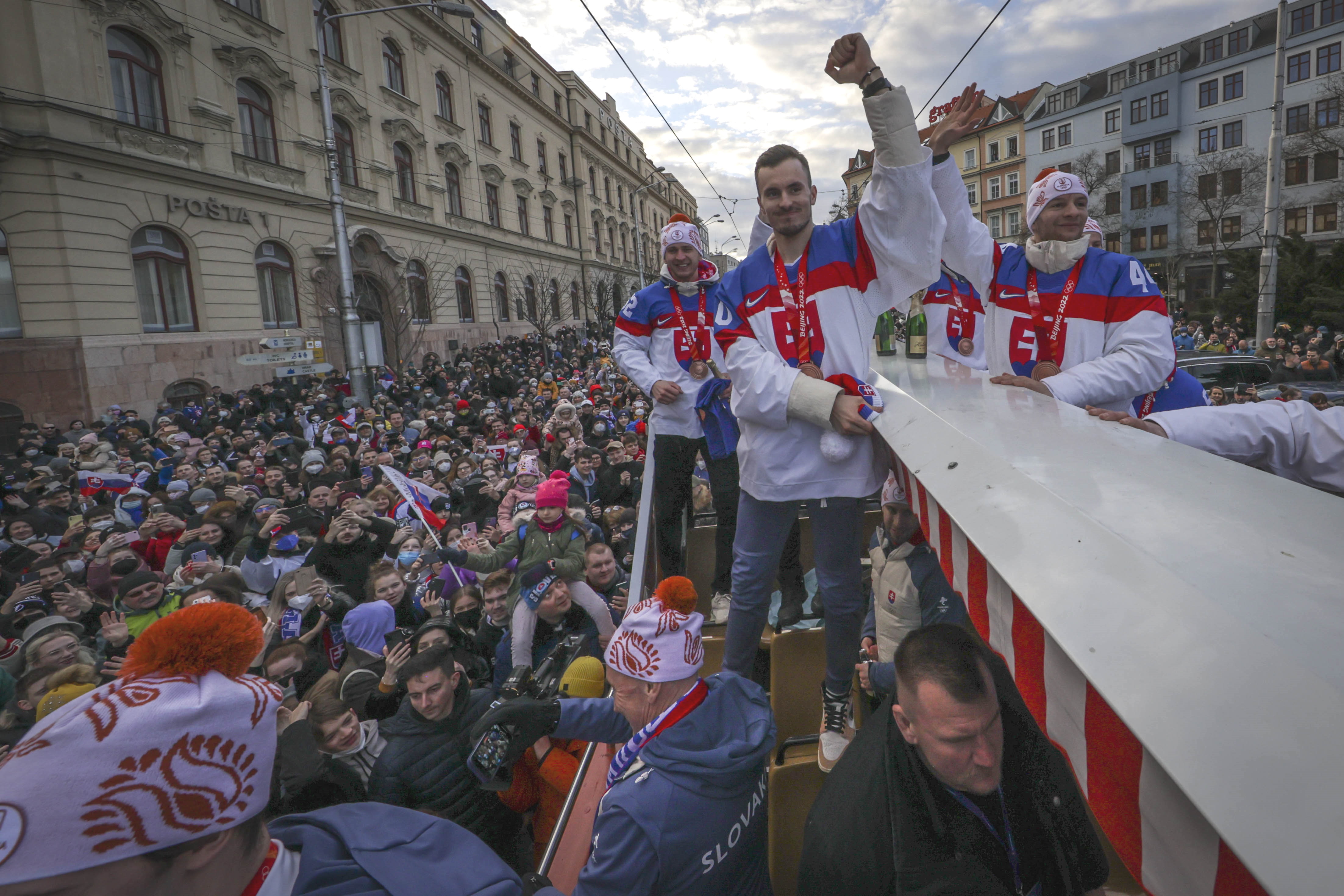 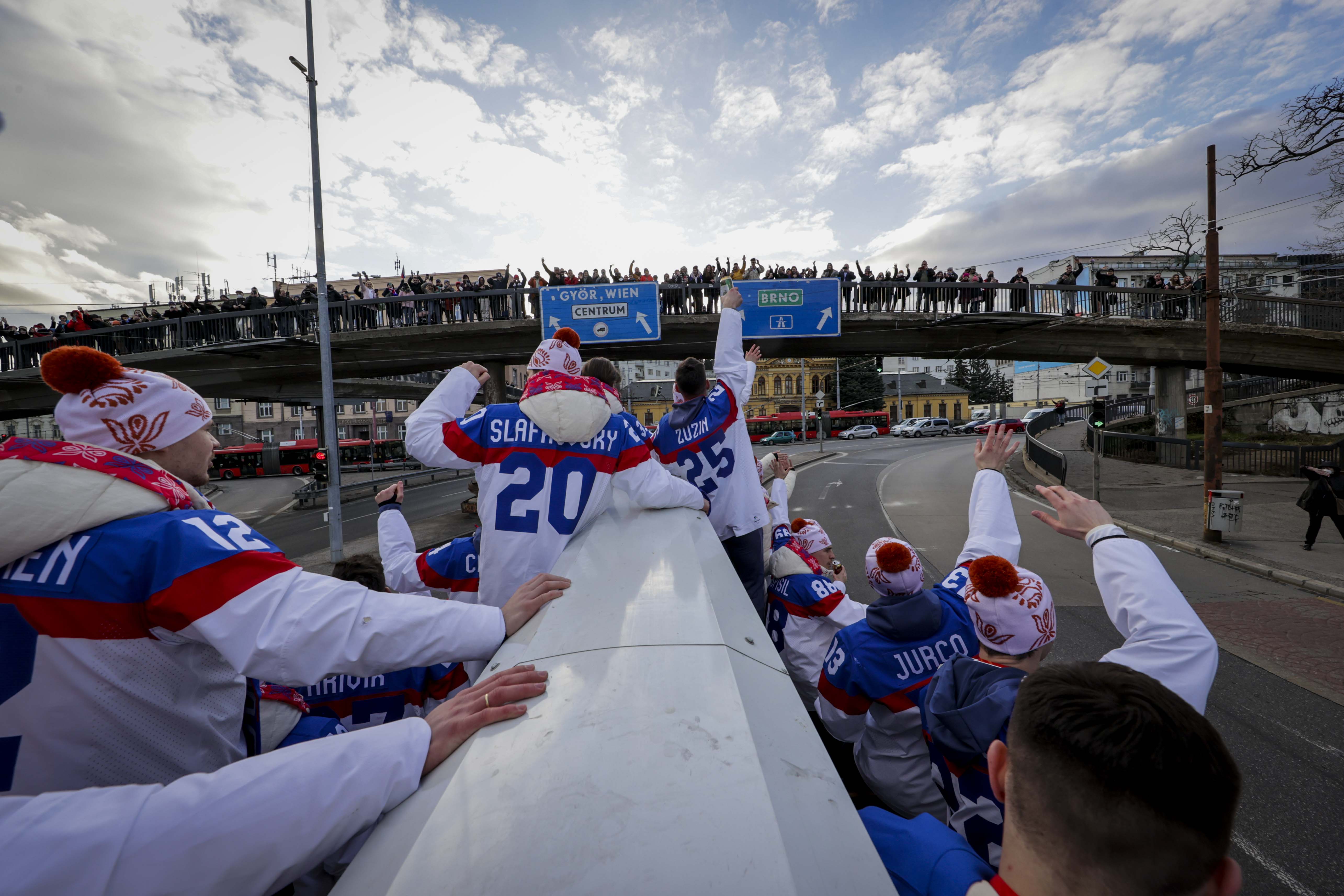 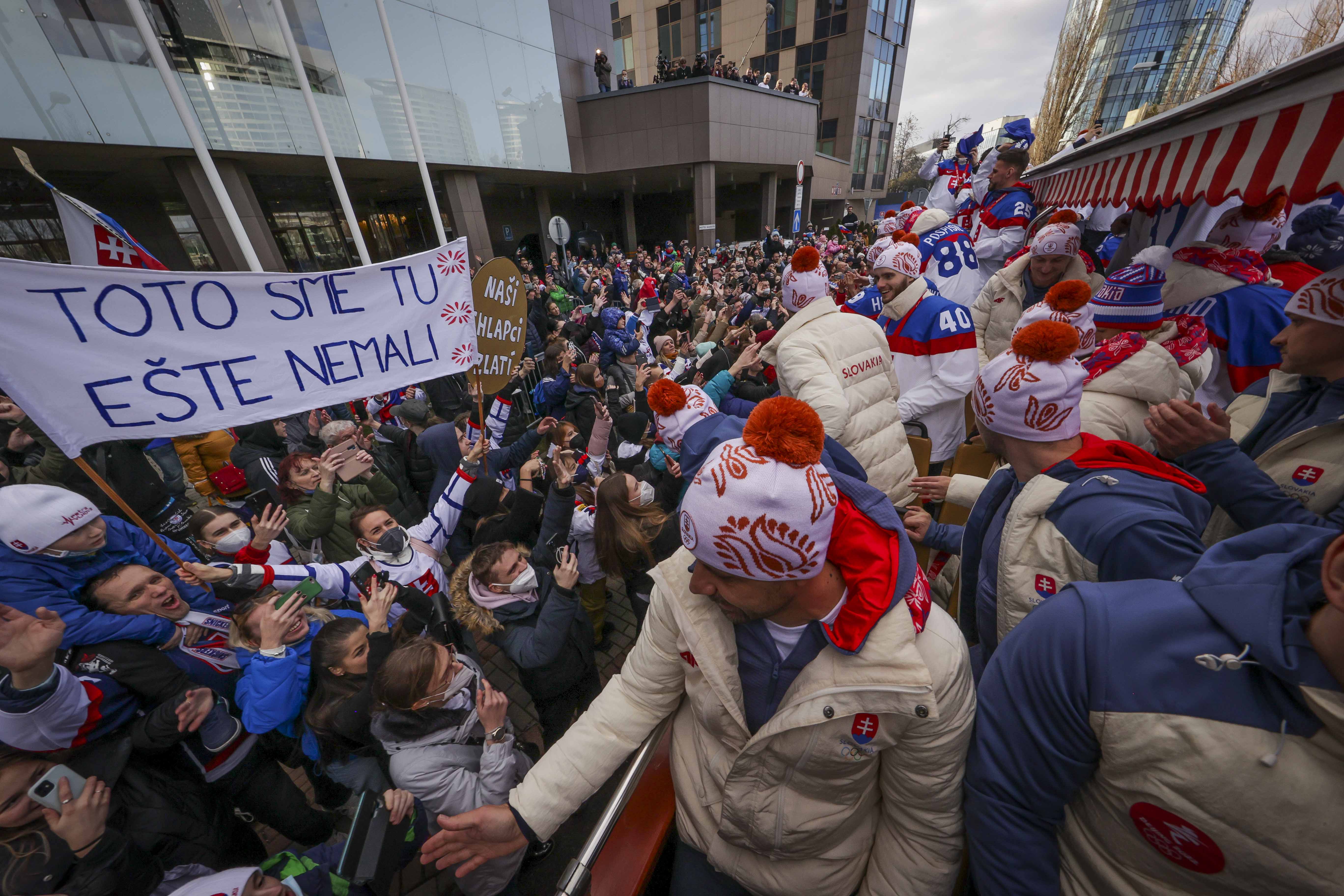 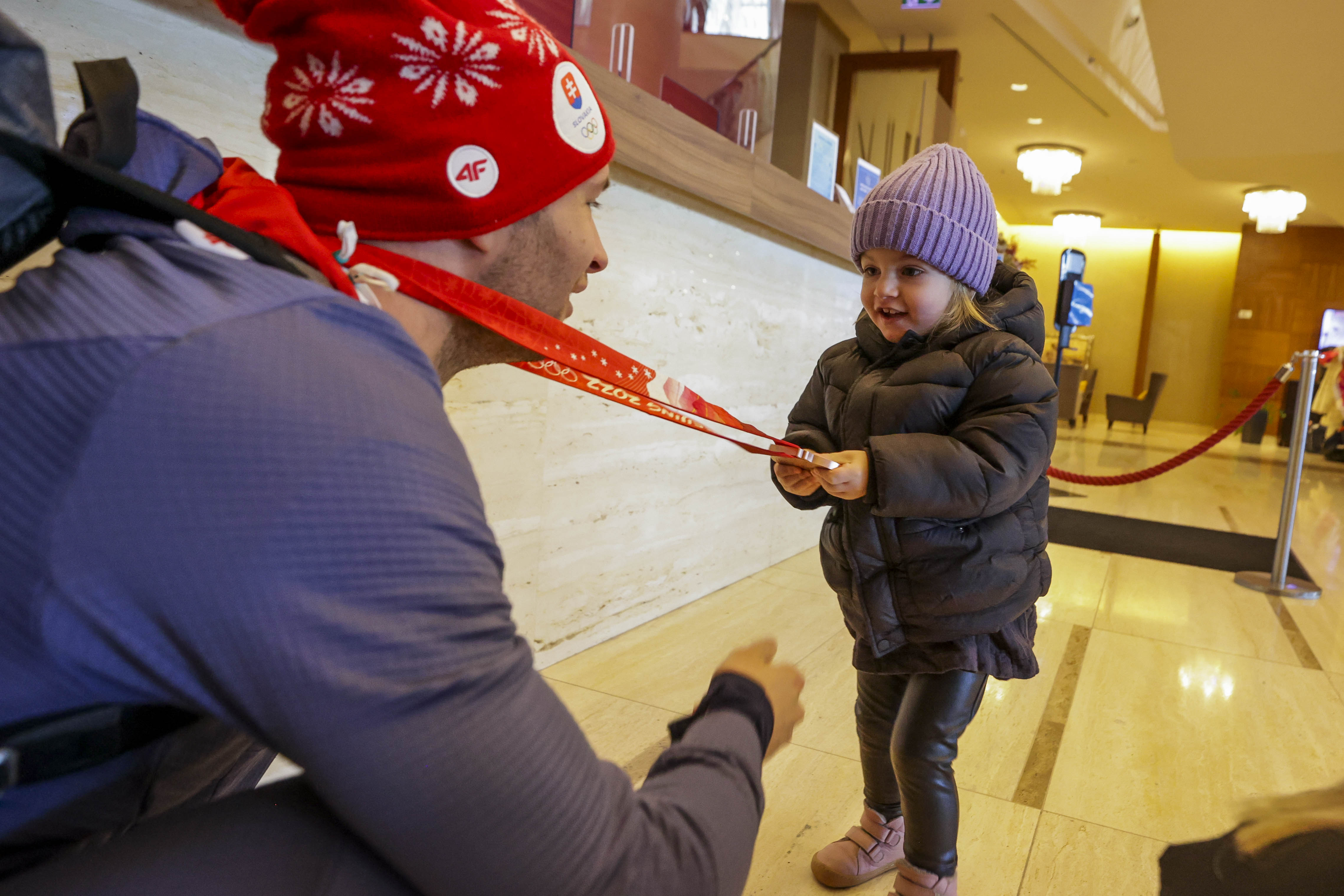 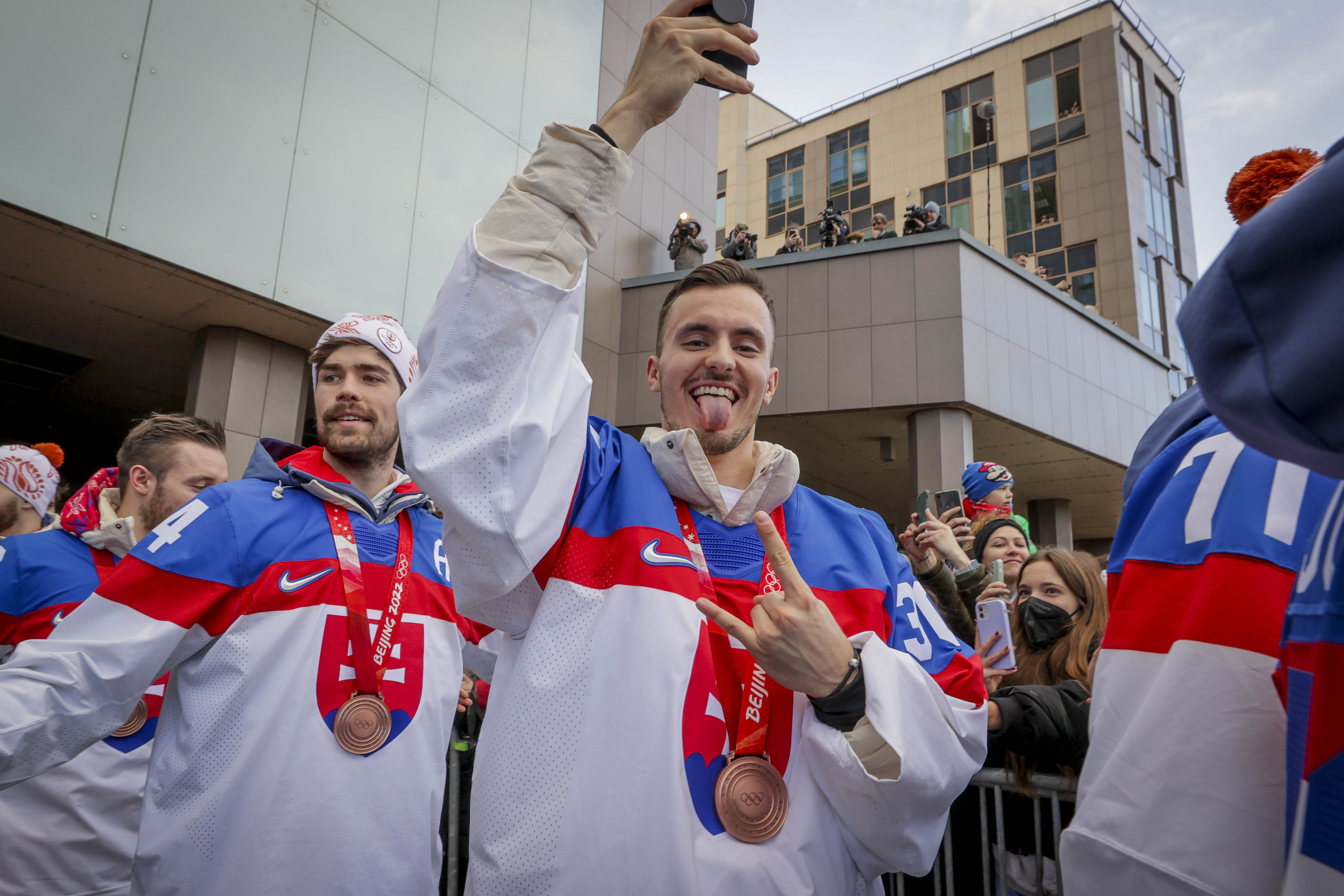 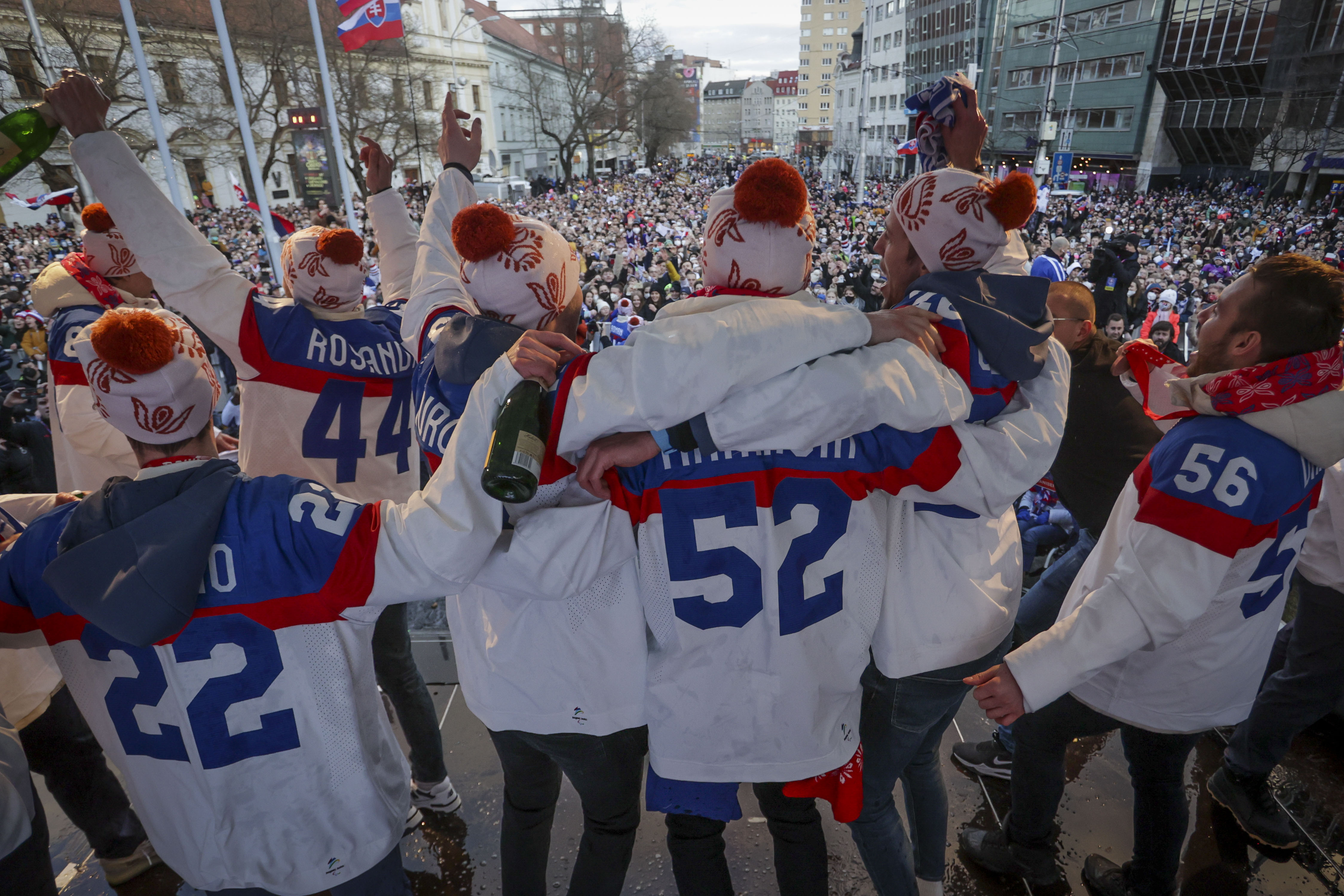 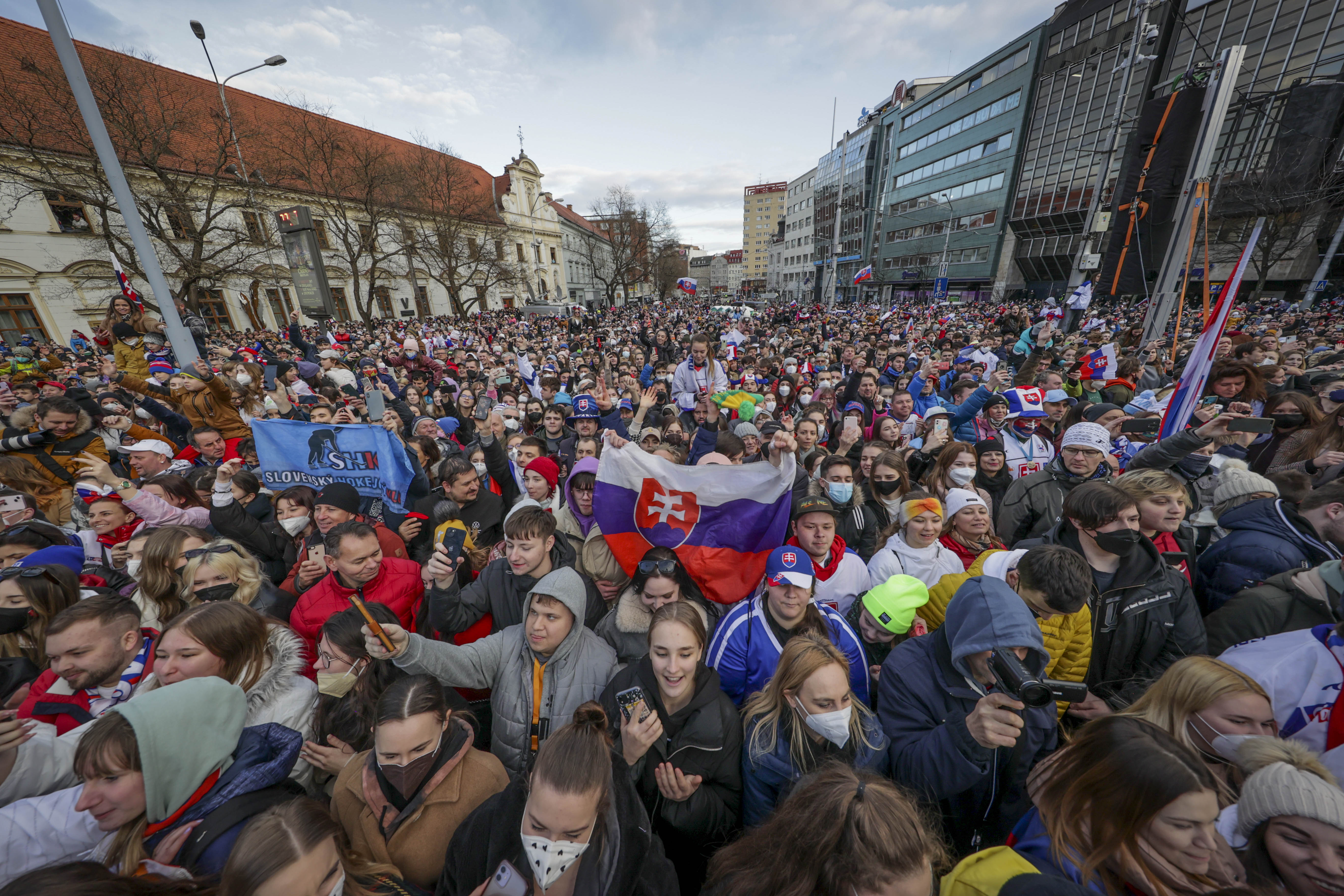