Team USA took a solid step towards securing its spot in the quarter-finals with a convincing victory over Denmark. The loss puts Denmark’s chances of advancing on life-support, and in fact they could be mathematically eliminated from contention before the end of the day if Canada beats Germany in regulation time.

“We felt good out there,” said U.S. forward Colin White. “We're still building. We have a huge game tomorrow against Germany who's undefeated, so we have to continue from today. You still try to do the right things the whole game, so anytime you get a big lead you're playing as hard as you can.”

After Sebastian Dahm had played every minute of Denmark’s first four games, Simon Nielsen started against the USA with Patrick Galbraith backing up. Both veteran goalies would get used in this game and neither would have much luck against an American team that didn’t get a ton of shots this game, but was quite efficient on the ones it did get. In fact, Denmark outshot the USA 26-22 in the game.

“I woke up at nine, went to breakfast, took a shower and went to the bus to come here,” said White. “You just have to roll with it with the 12 o'clock game. I'm pretty hungry right now.”

The game started at 12:15 in Kosice, and in the wee hours of the morning in the United States. The Americans seemed slow to answer the wake-up call. The Danes got a great scoring chance just a minute in with Mikkel Boedker’s initial shot nicely tipped by Patrick Russell and Peter Regin getting to the rebound, and Cory Schneider had to be alert to stop both.  With the help of an early power play, Denmark kept up the early pressure but couldn’t get the all-important first goal.

Instead, it was the Americans opening the scoring just past the midpoint of the first period. Noah Hanifin’s long pass from deep in his own zone found Ryan at the far blueline. In two-on-nothing, Ryan passed to Frank Vatrano, who had Nielsen at his mercy.

For the rest of the period, it was all USA. With the Americans on the power play just 29 seconds later, Nielsen got a piece of Debrincat’s shot from the slot, but it dribbled across the goal line to make it 2-0. Next, Suter’s long wrister was double deflected by James van Riemsdyk and Clayton Keller, giving Nielsen no chance and it was 3-0 at 14:24.

Finally, with just over a minute to play, Jack Hughes picked up his first point of the tournament, taking a drop pass from Eichel and backhanding a pass toward the front of the net. Chris Kreider finished that one off, with Nielsen again getting a piece of it but not enough to stop it from crossing the line.

“We knew they were going to come out and work hard,” said Eichel. “I thought we came out and established our game early, which was good to see. We played with the lead most of the game.”

World Men
Denmark vs. USA - 2019 IIHF Ice Hockey World Championship
Team USA took a solid step towards securing its spot in the quarter-finals with a convincing victory over Denmark.
DEN USA 18 MAY 2019

After four U.S. goals on eight shots, Nielsen was lifted in favour of Galbraith for the start of the second period.

Once again, the Danes had the better start to the second period and this time they scored, although it took a while to confirm following a coach’s challenge for goaltender interference. Mathias Bau sent the puck to the net and Olesen tipped it into Schneider’s pad. In hard pursuit of the rebound, Olesen overskated the puck, and then turned to retrieve it and backhanded it into the net in one motion, brushing Schneider in the process.

The momentum was short-lived, however, as a pair of American goals 1:22 apart made it a 6-1 game. First, Debrincat converted a pass from Kane for the second time, and then following a neutral-zone turnover, Ryan got his second assist of the game by sending in Dylan Larkin, who beat Galbraith with a wrister inside the far post.

With victory well in hand, Jack Eichel scored a power-play goal with 8:41 remaining to make it 7-1, burying a wrister from the slot. Debrincat and Kane each picked up their third points of the game.

“We want to win both our final games to put ourselves in a good position,” said Eichel. “We''re looking forward to Germany tomorrow and then Canada on Tuesday.”

With two games remaining, two more points will be enough to put the USA into the quarter-finals. As for the Danes, their fate is pretty much out of their hands right now, and with a pair of tough games against Canada and host Slovakia still to go, they're mostly hoping for Great Britain and France to lose in order to be safe from relegation. 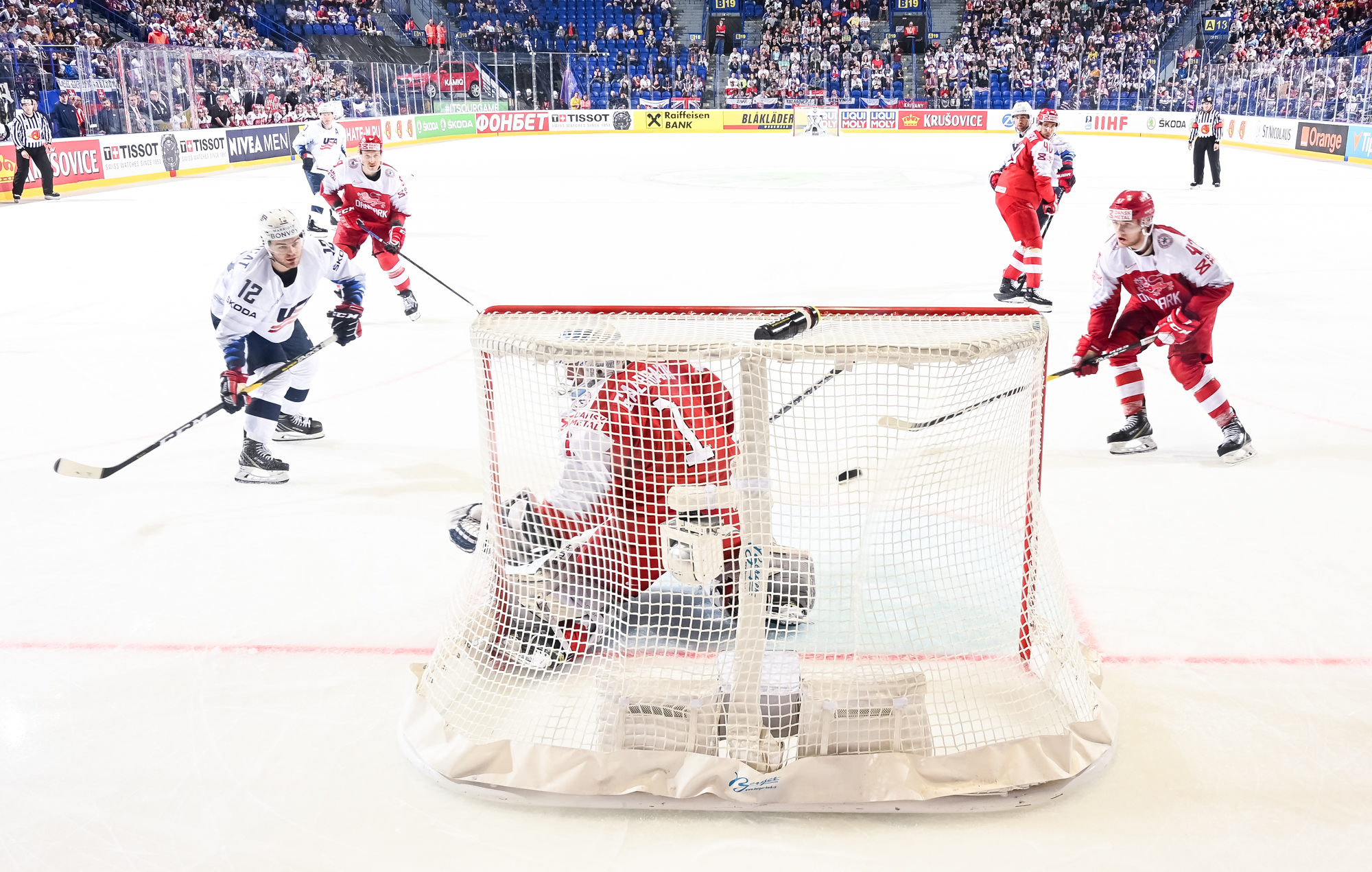 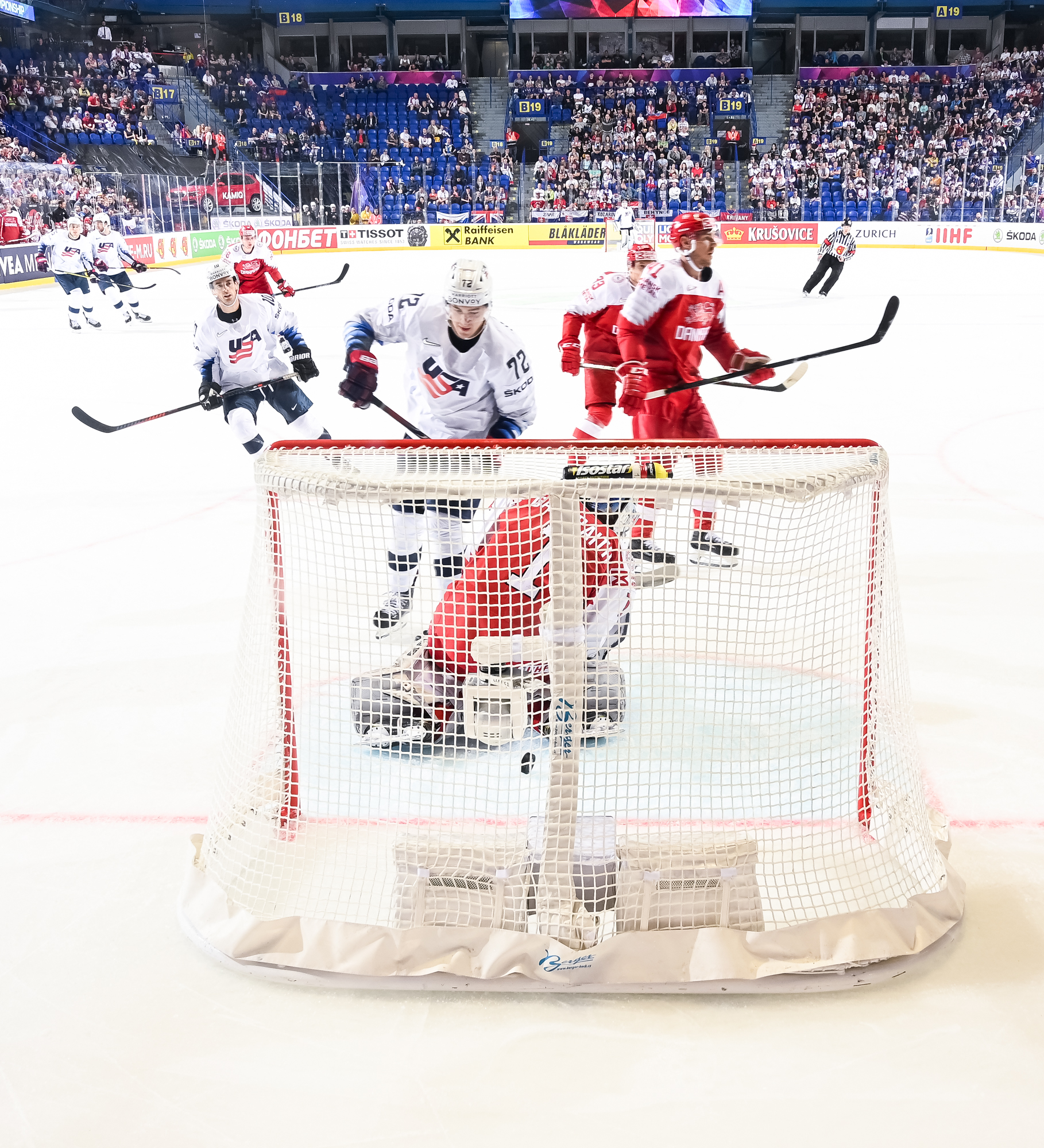 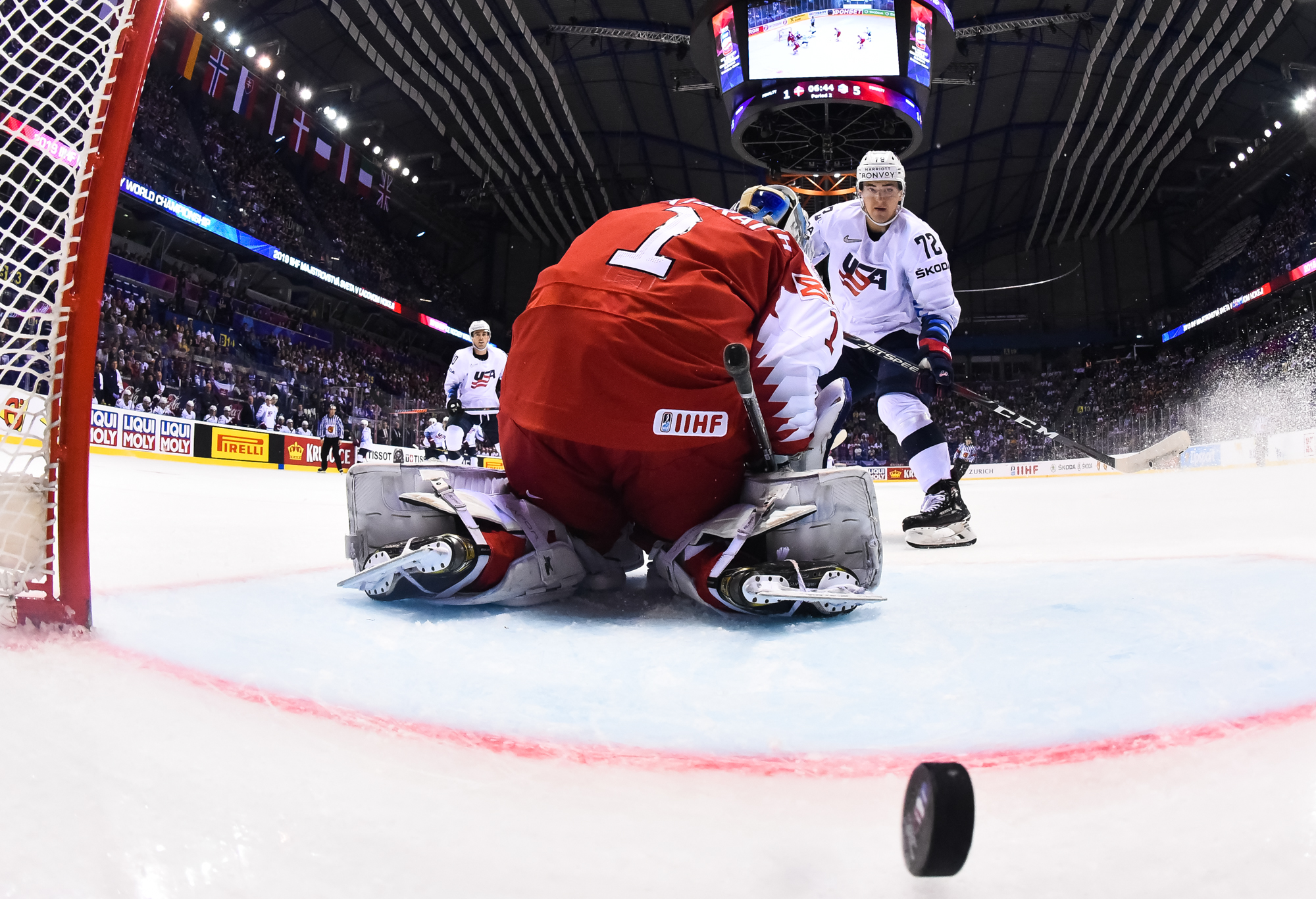 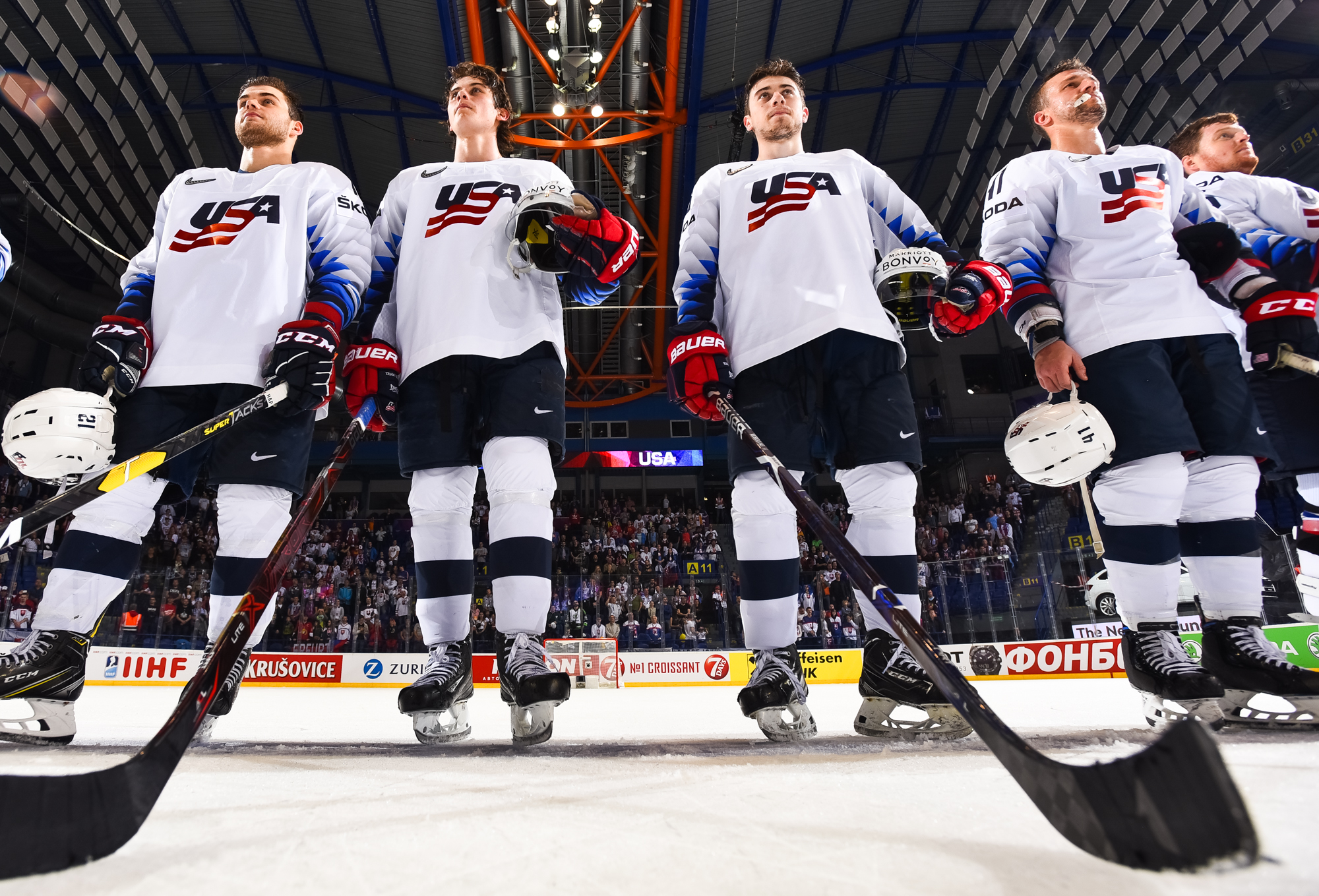 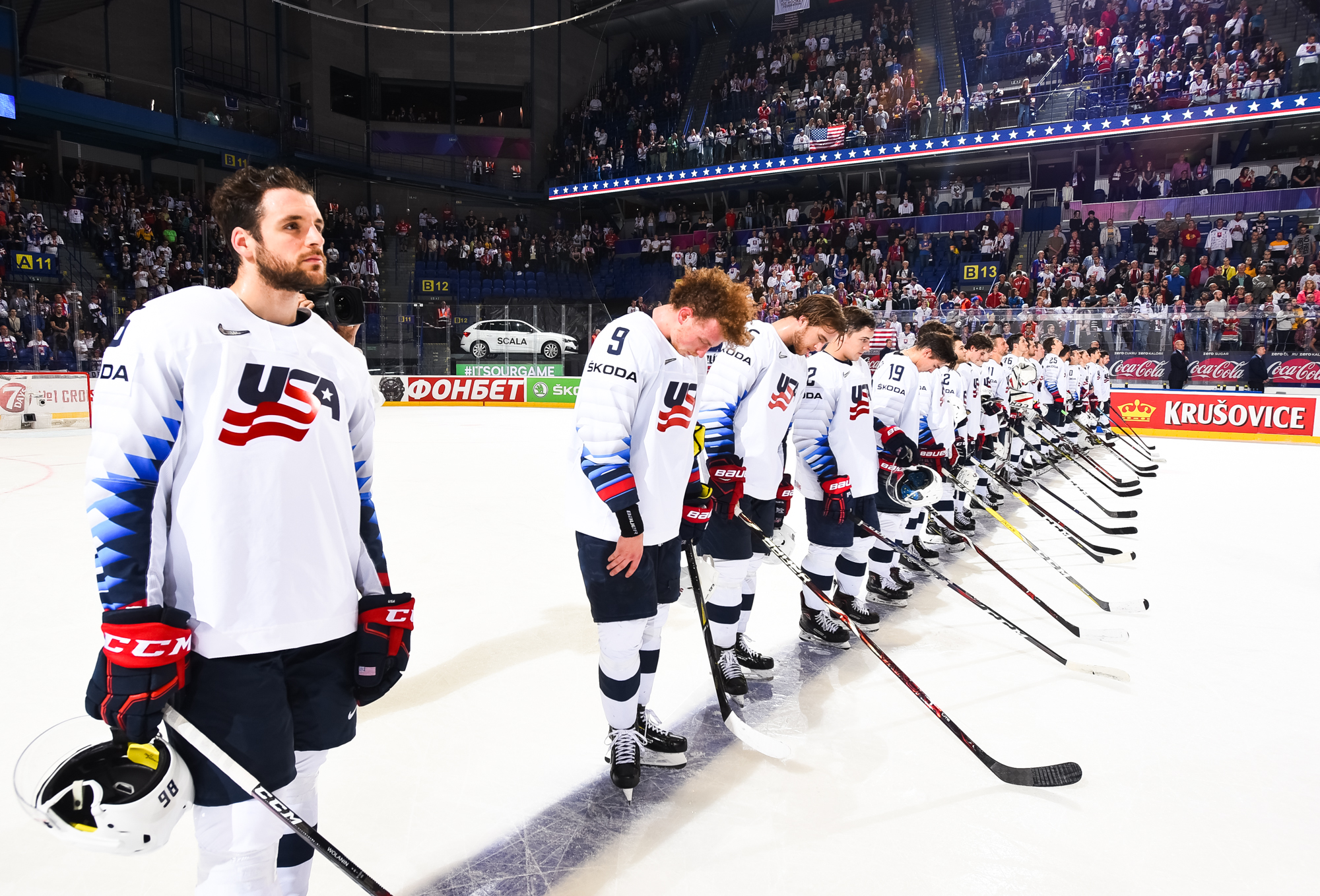 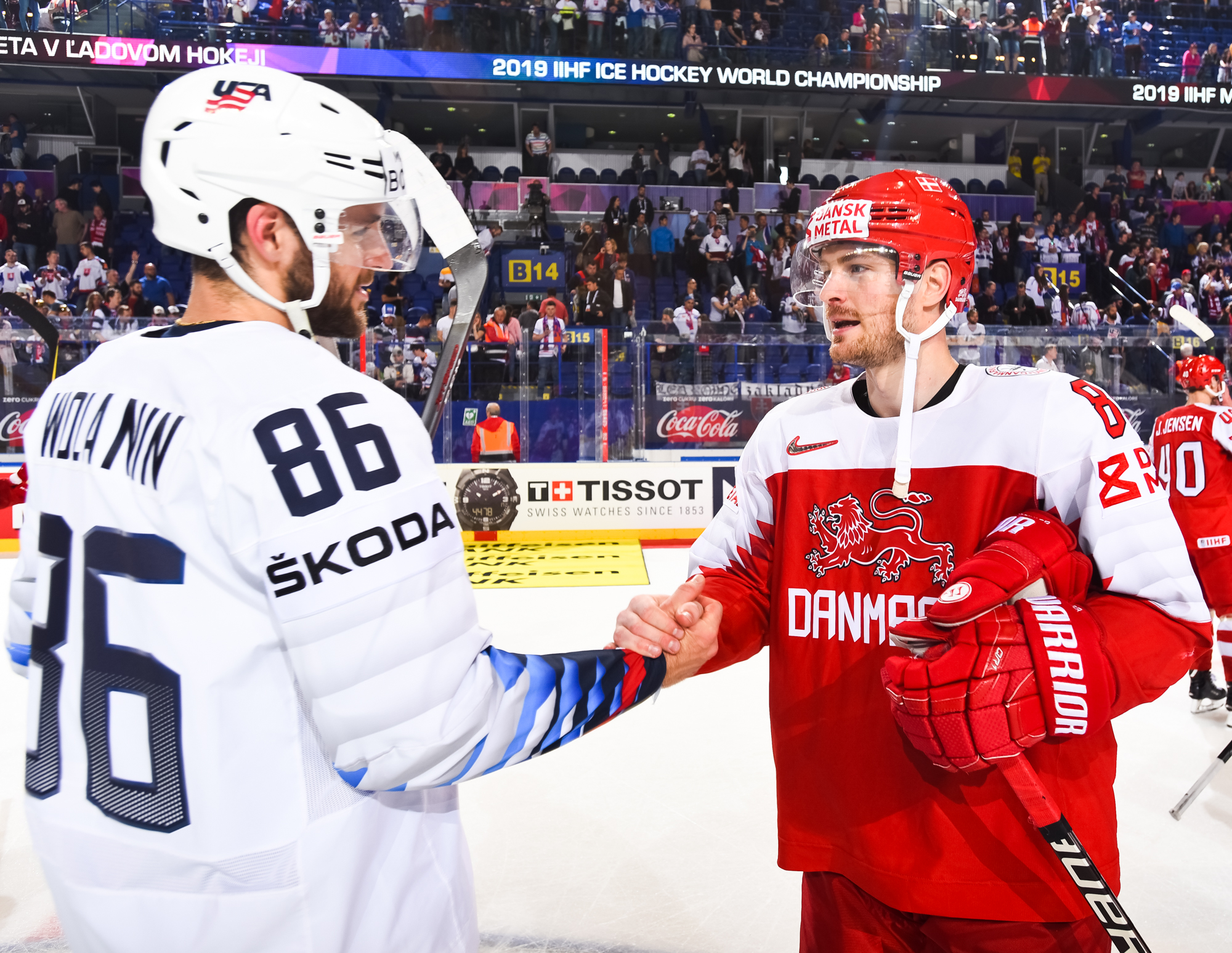 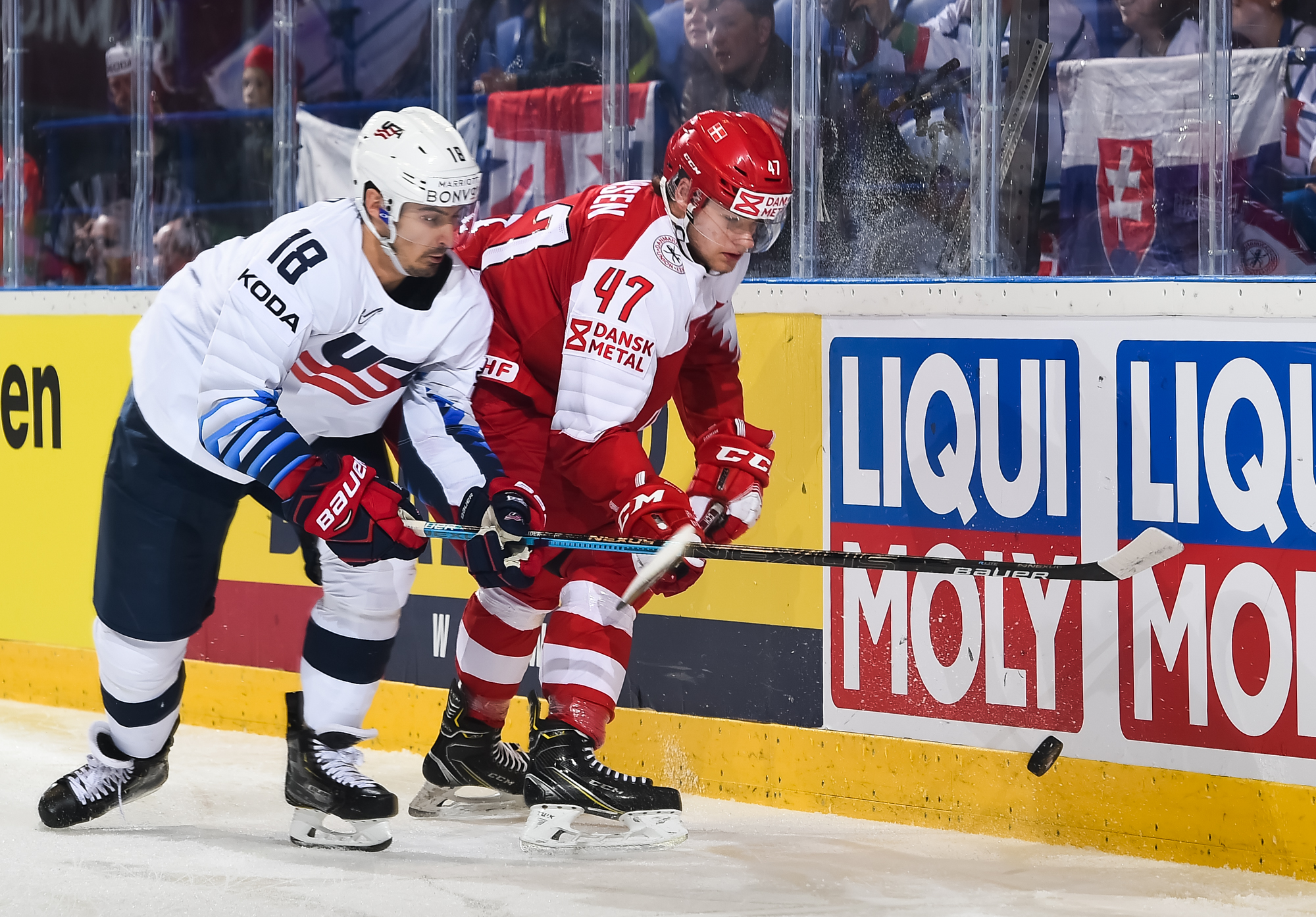 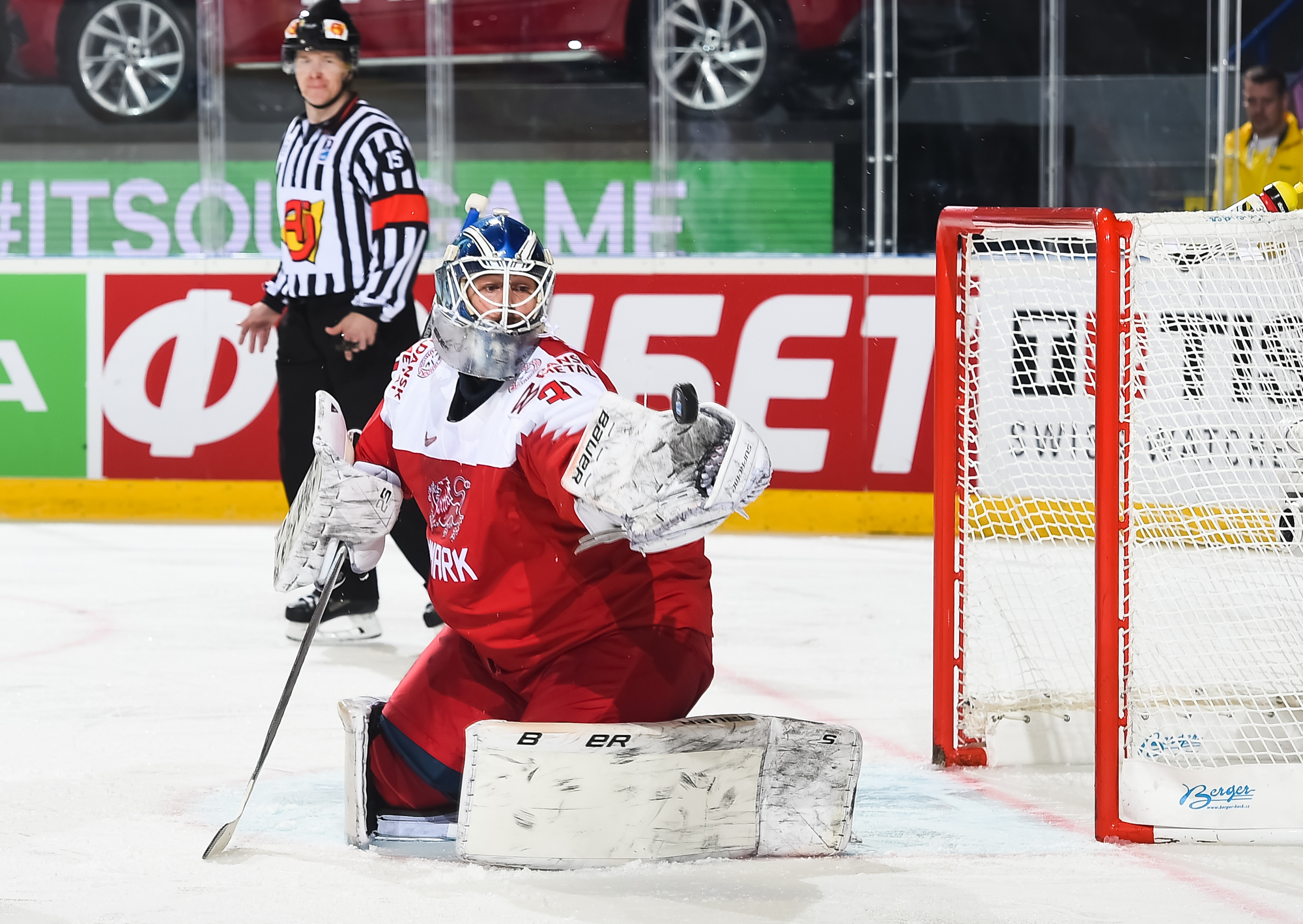 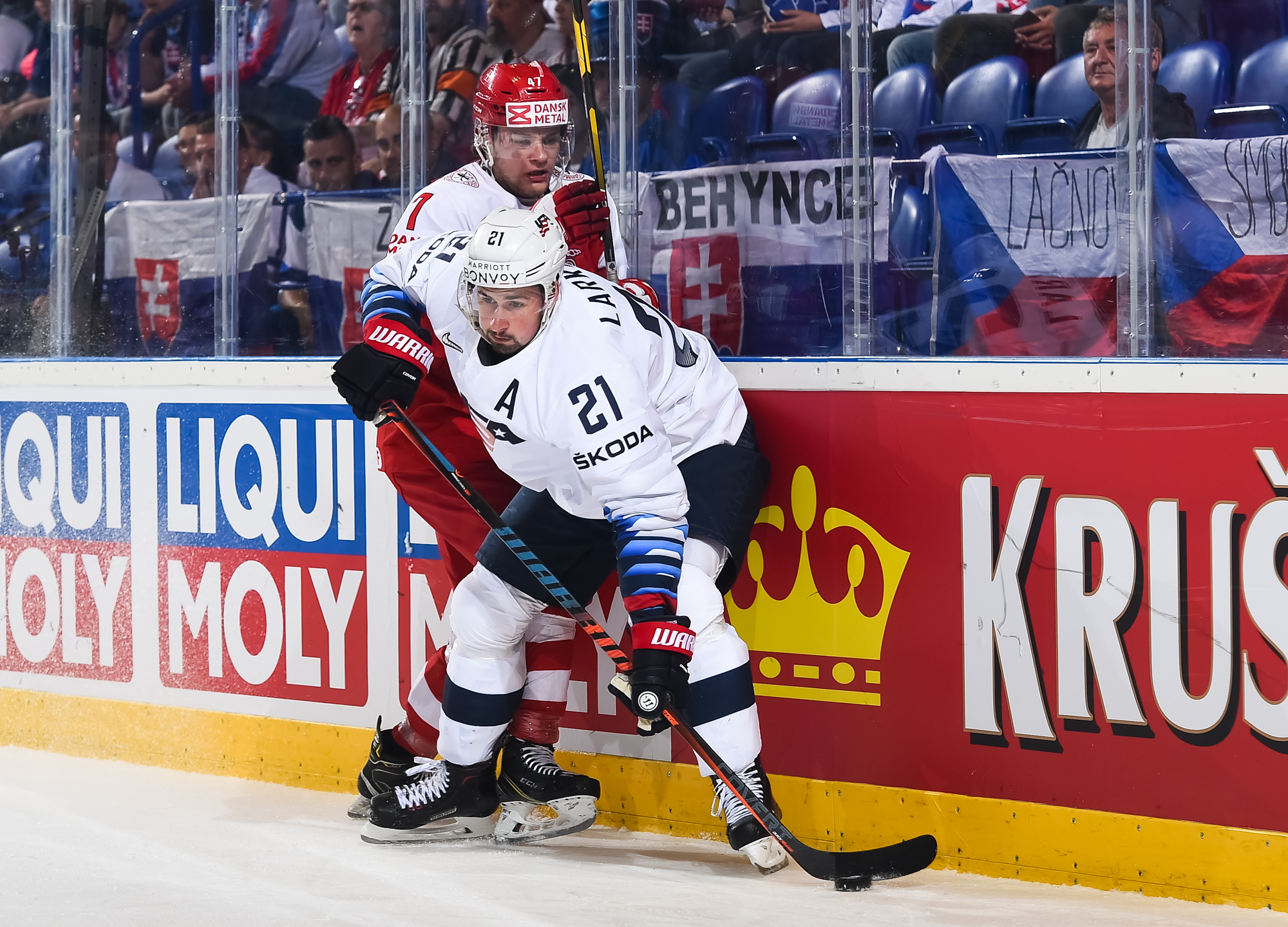 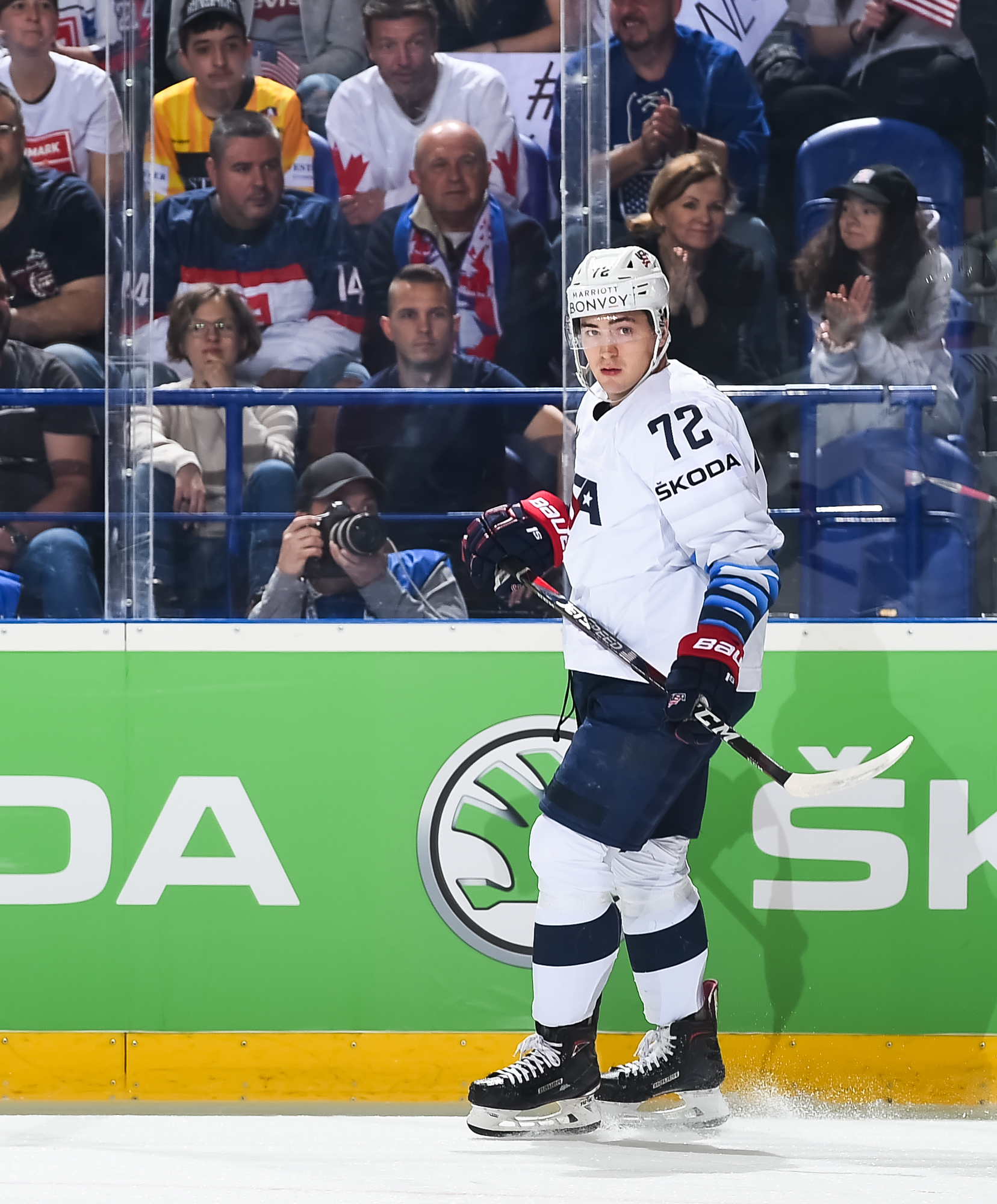 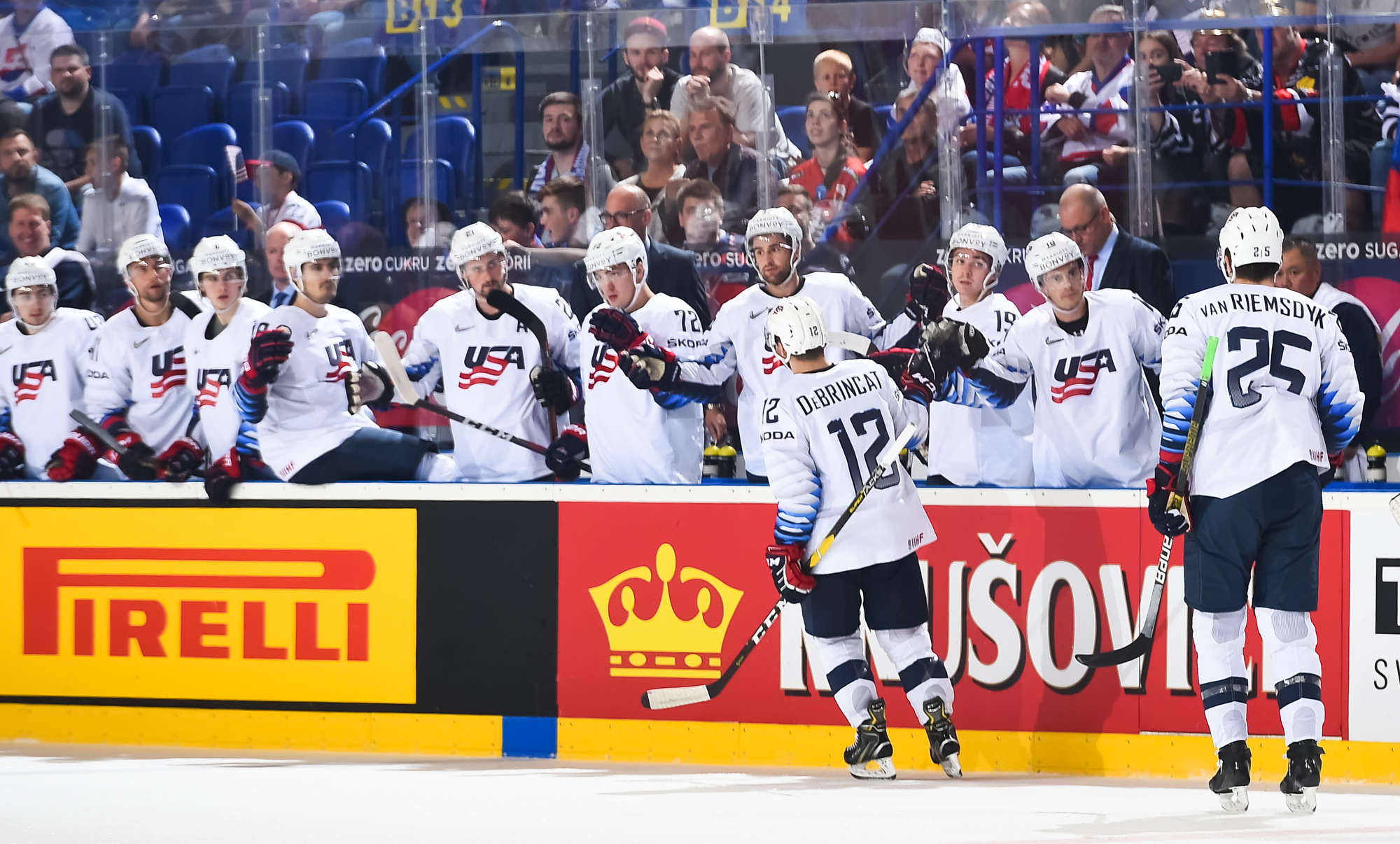 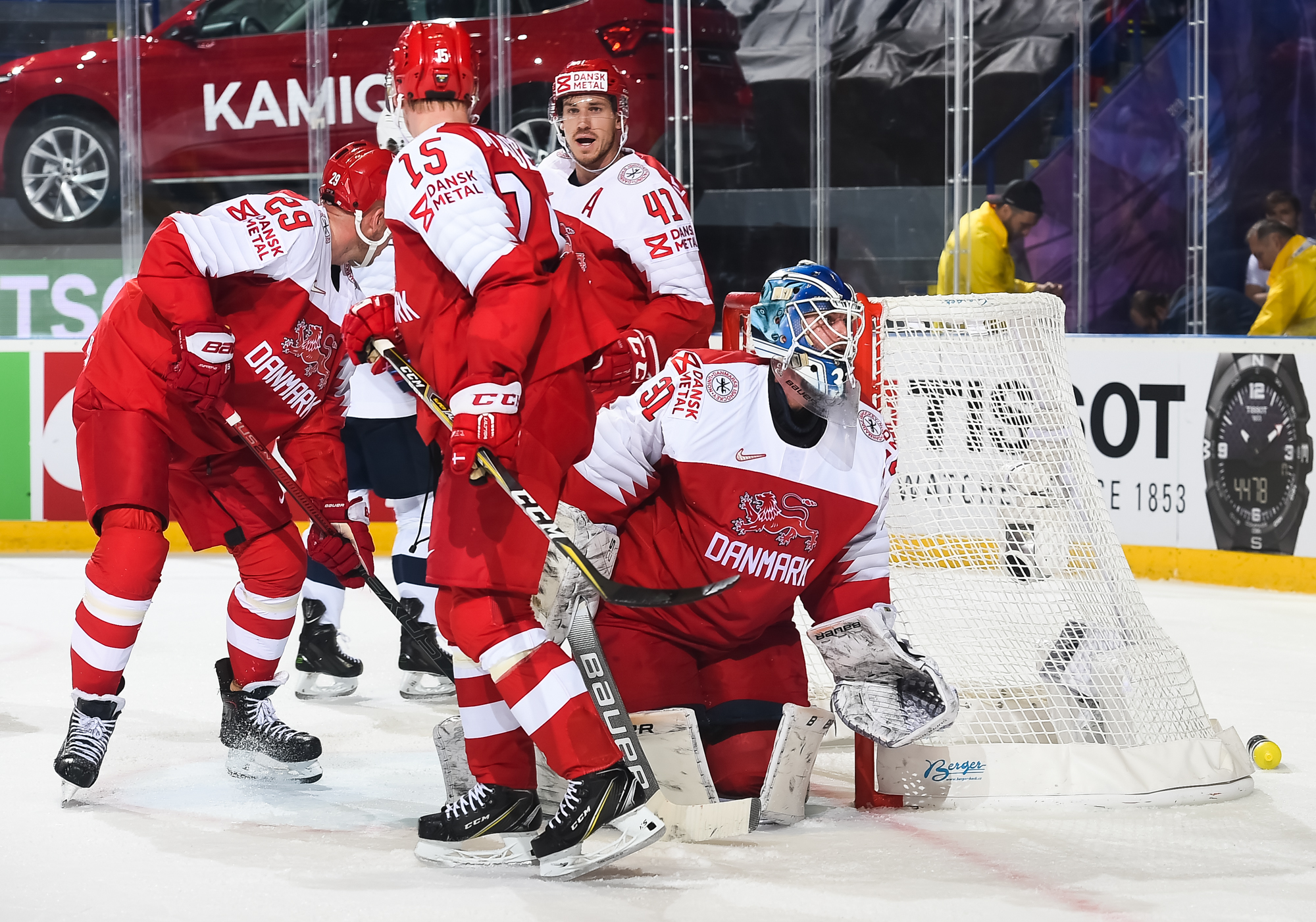 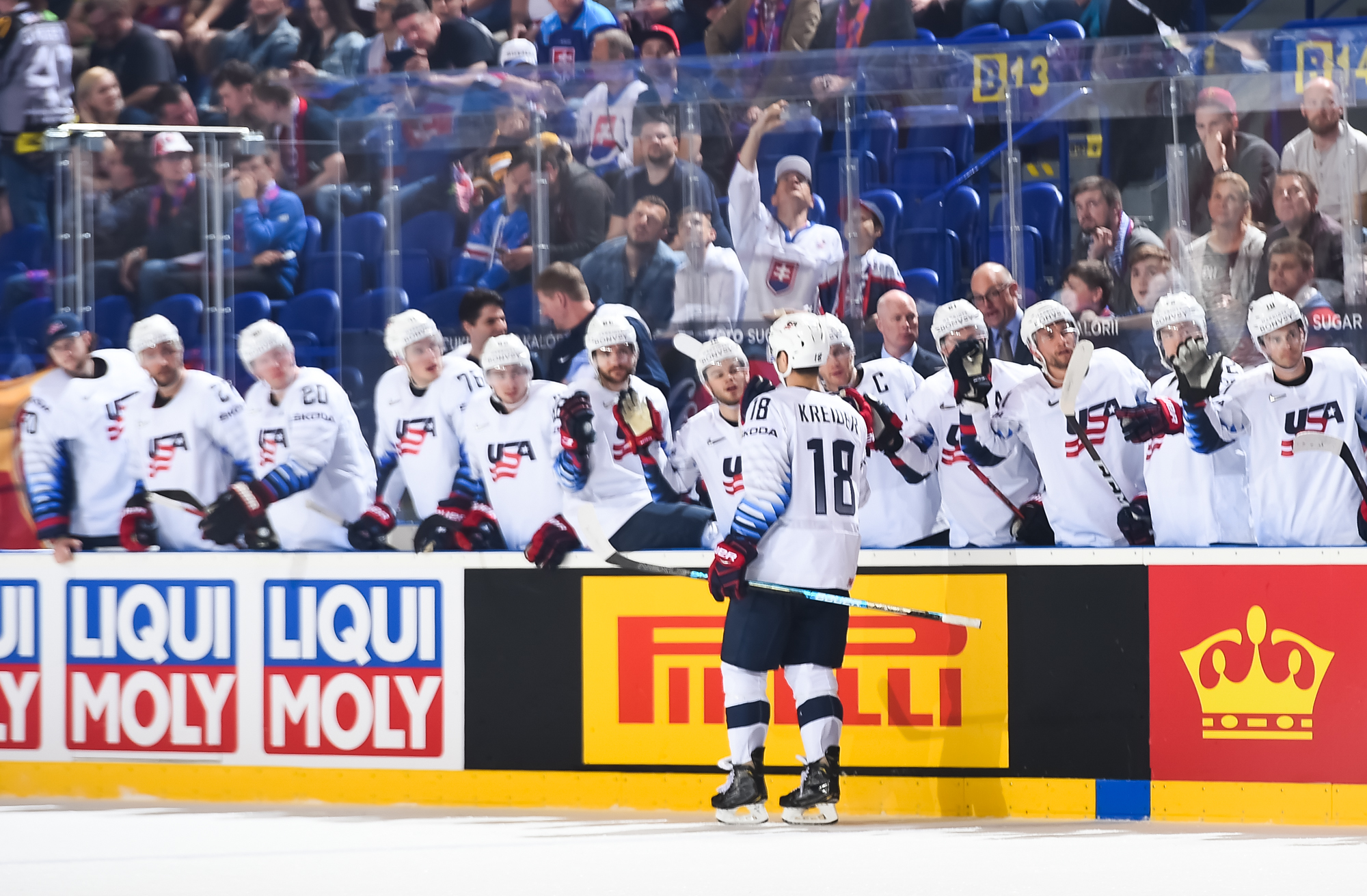 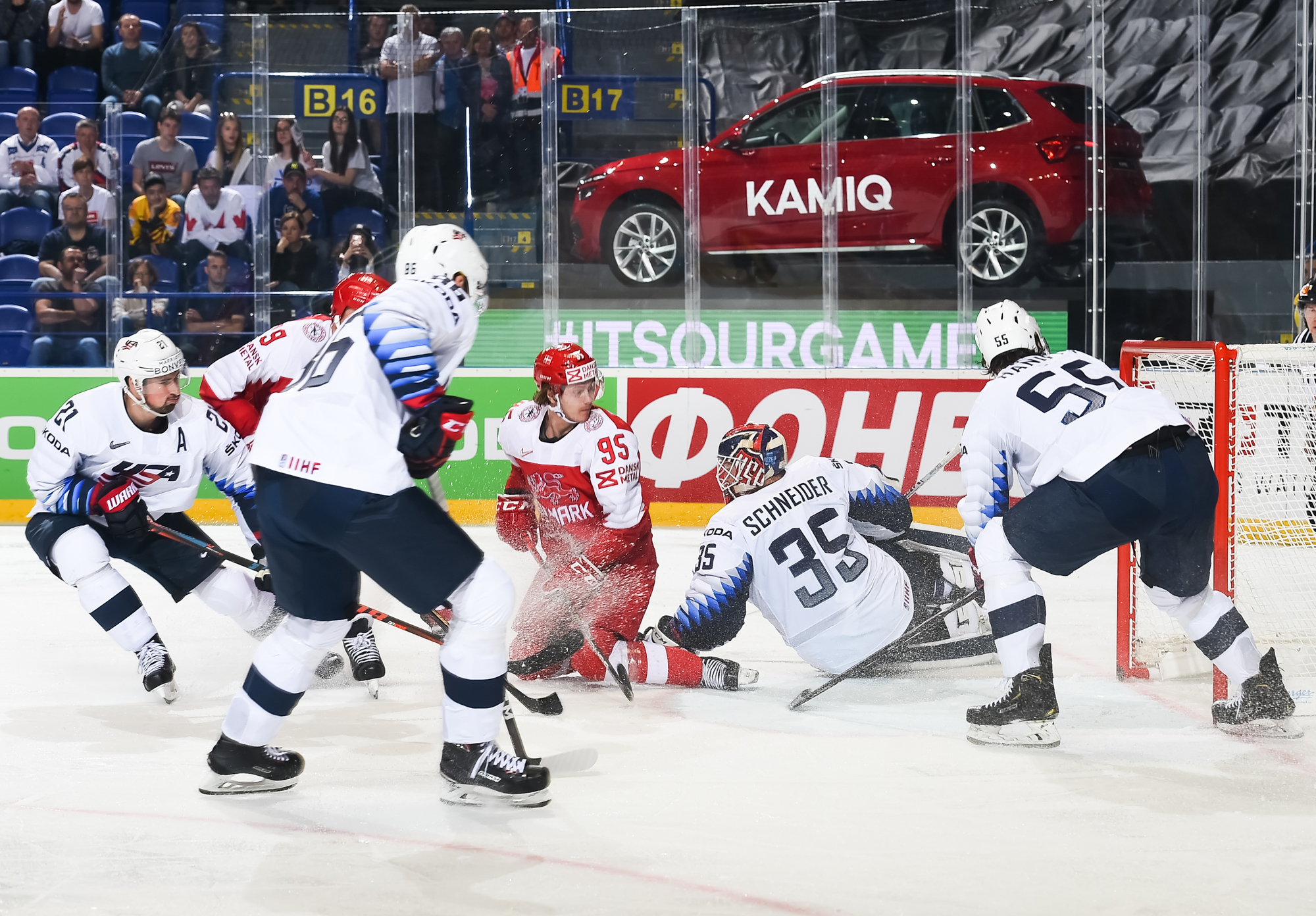 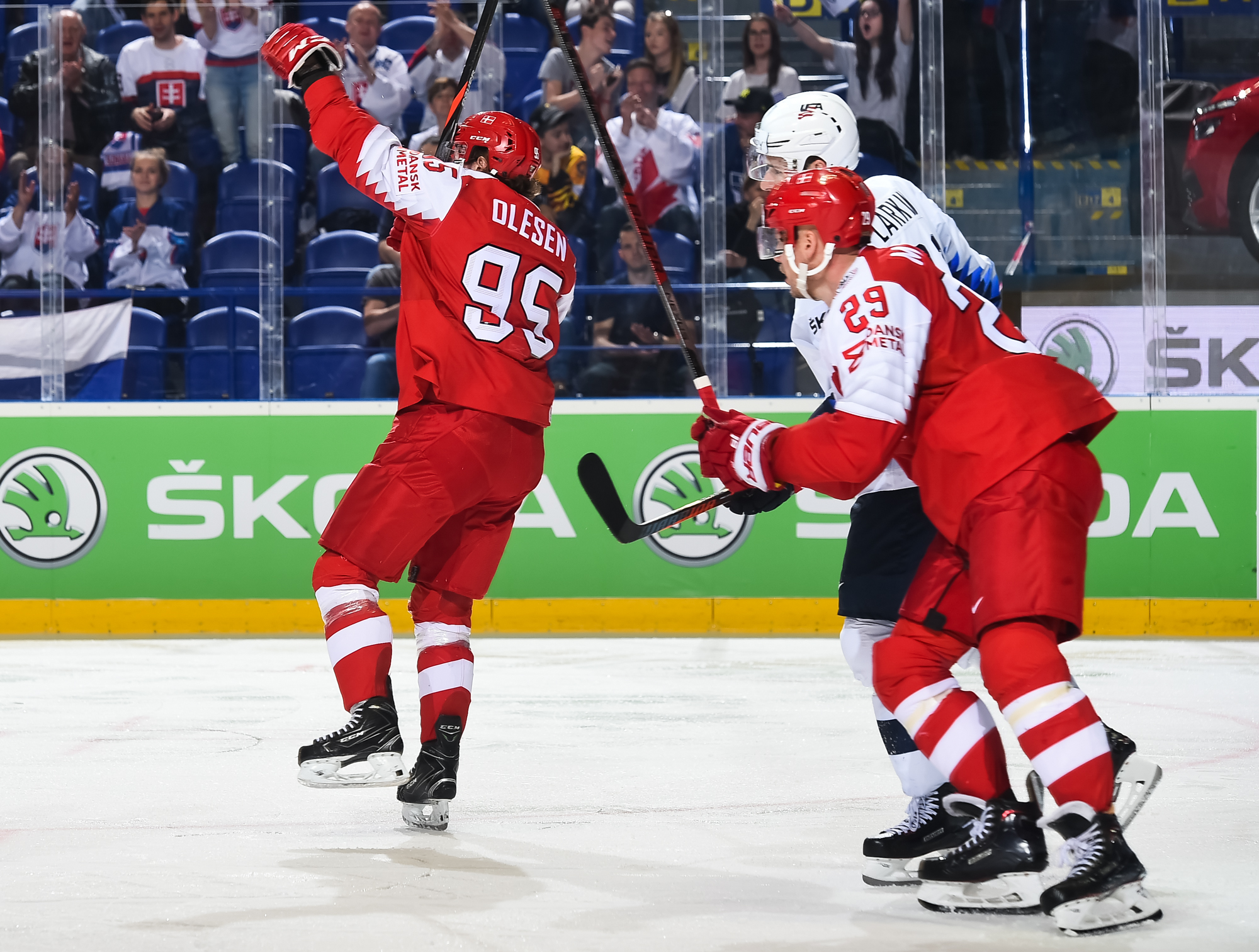 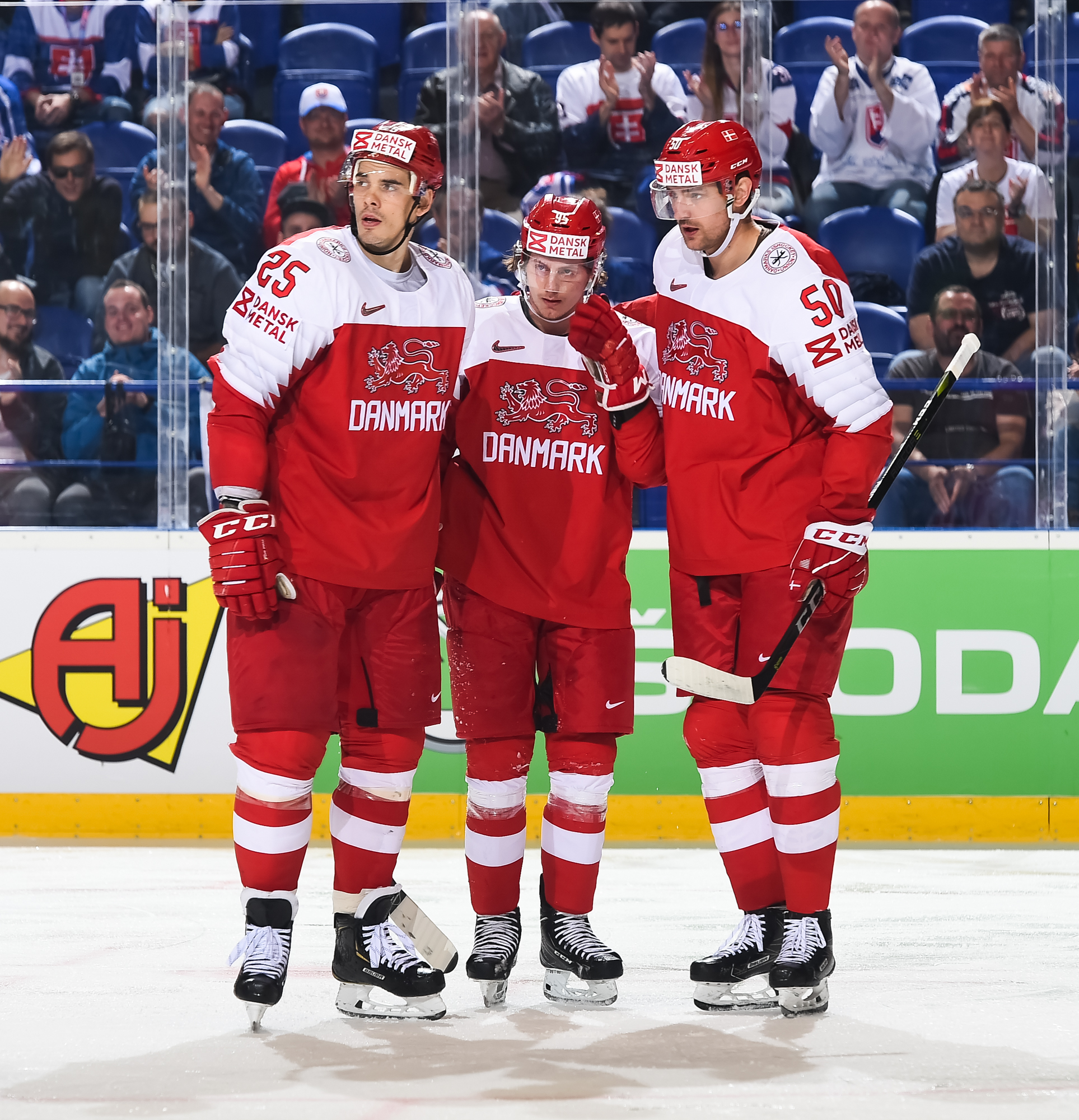 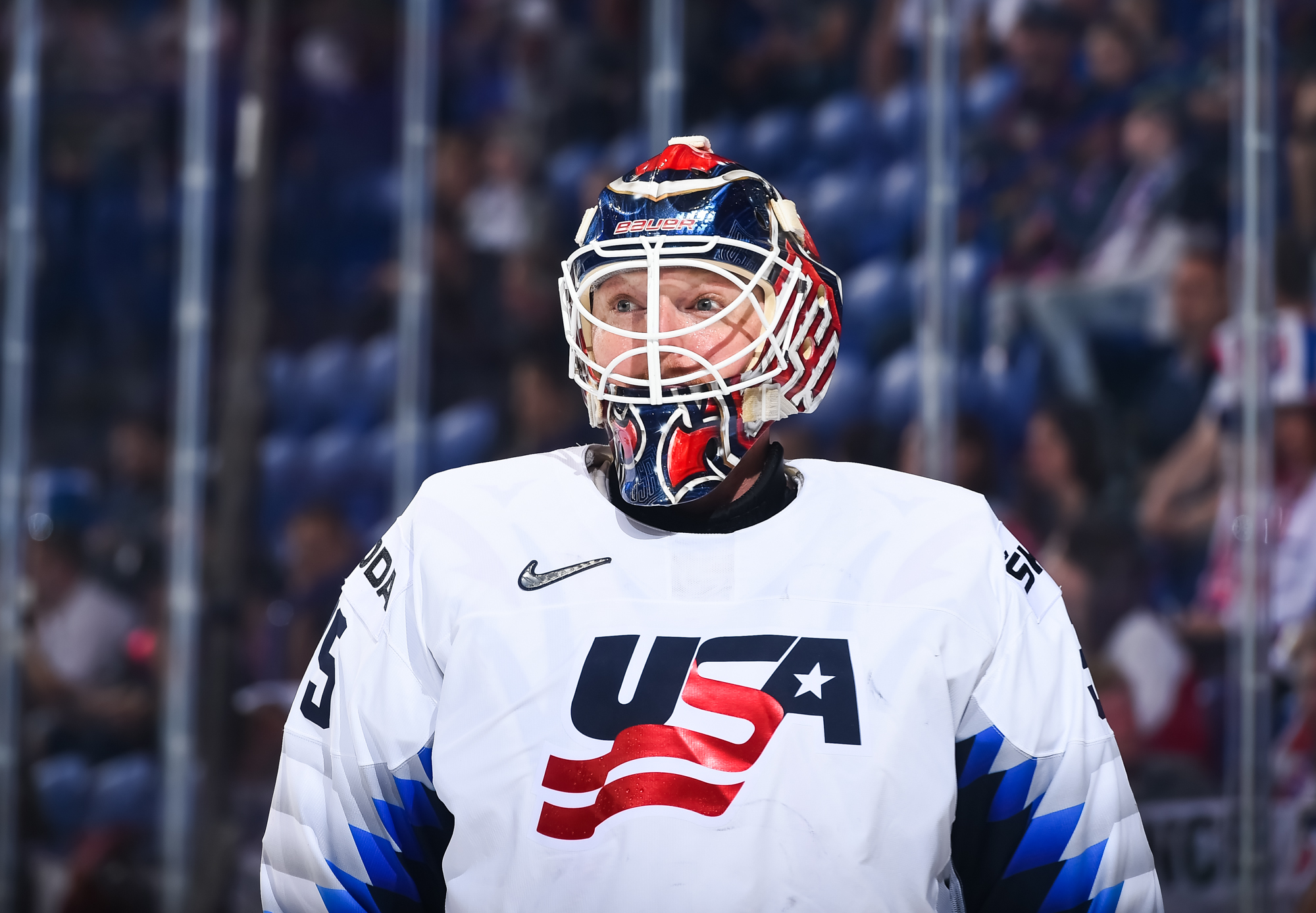 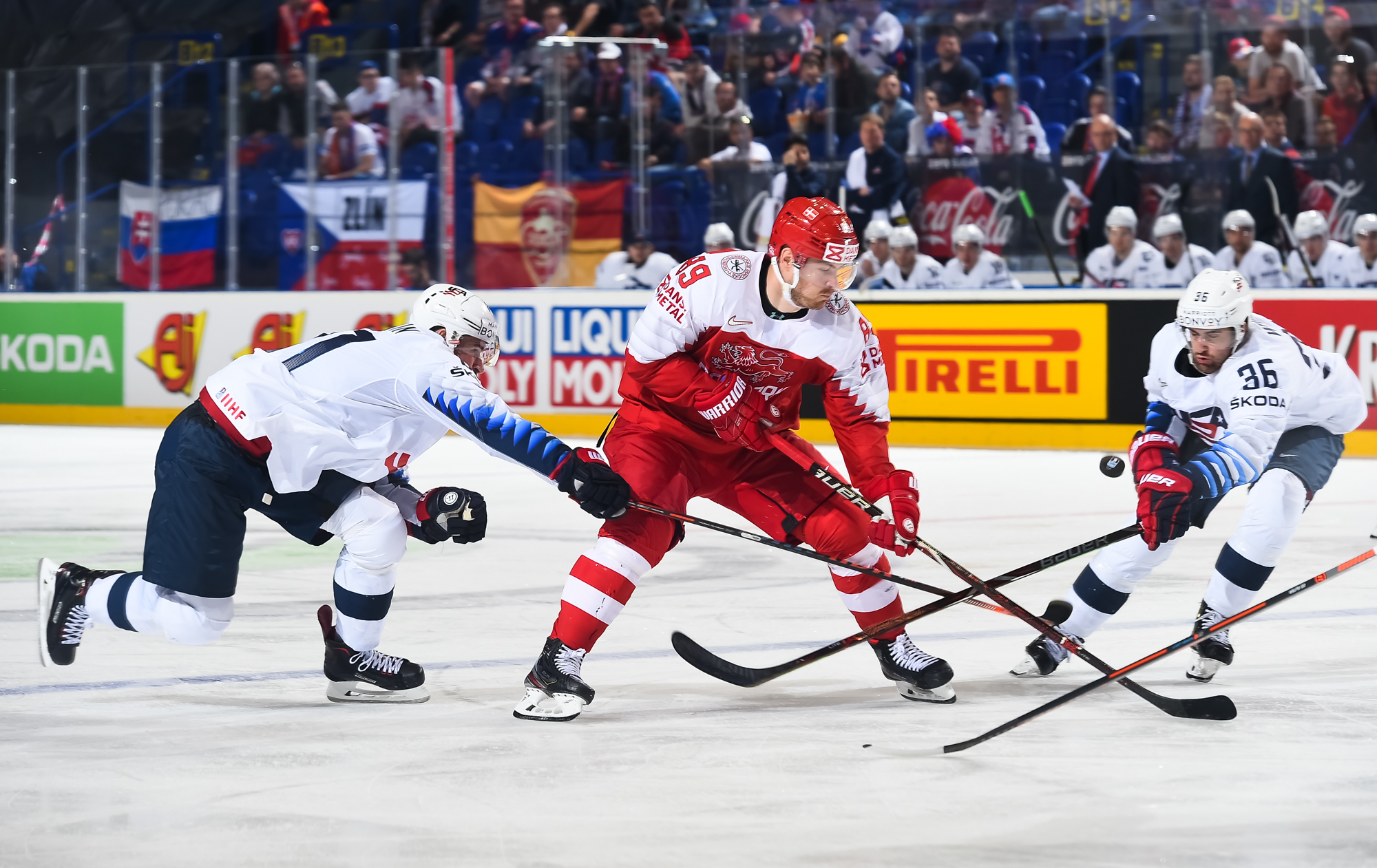 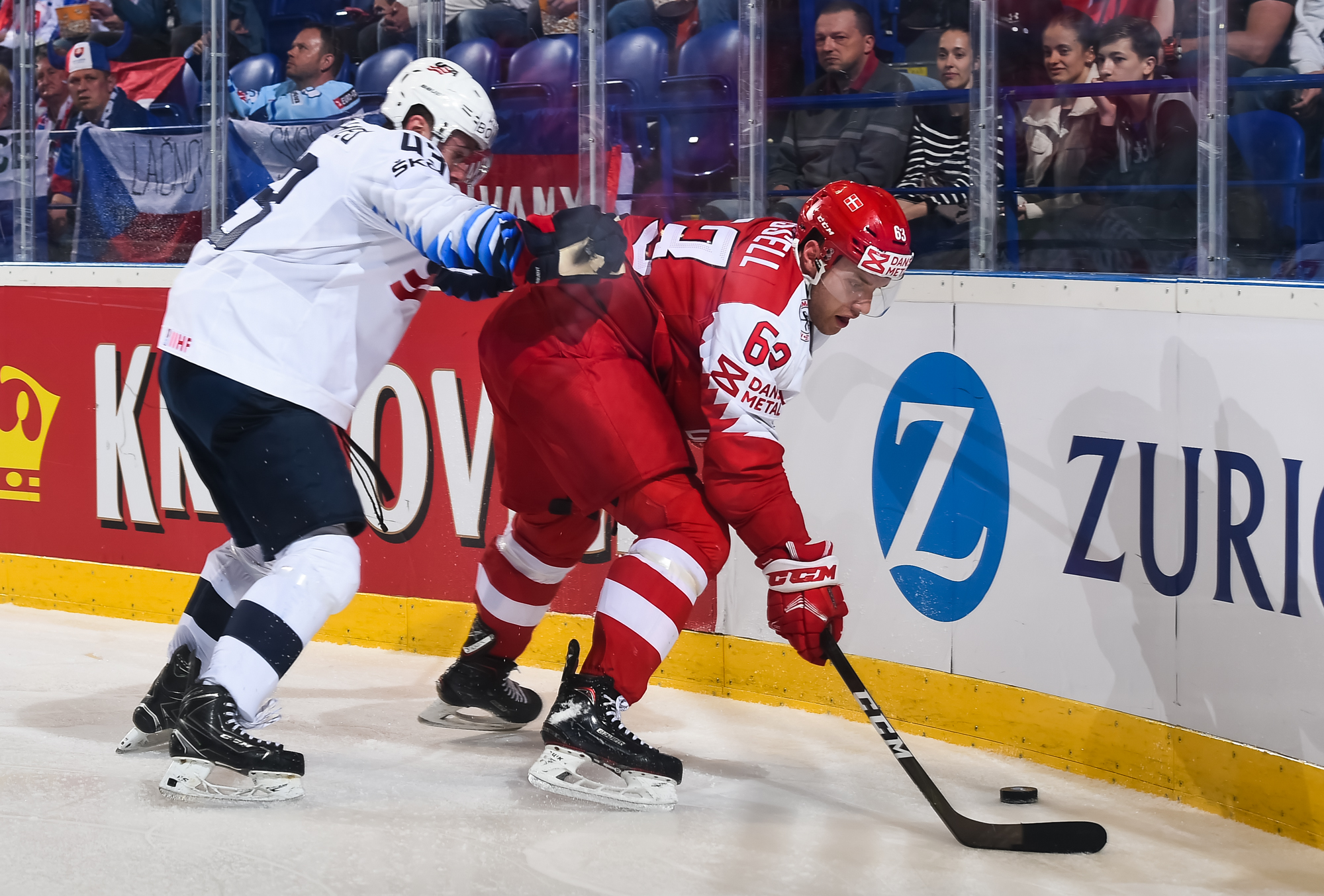 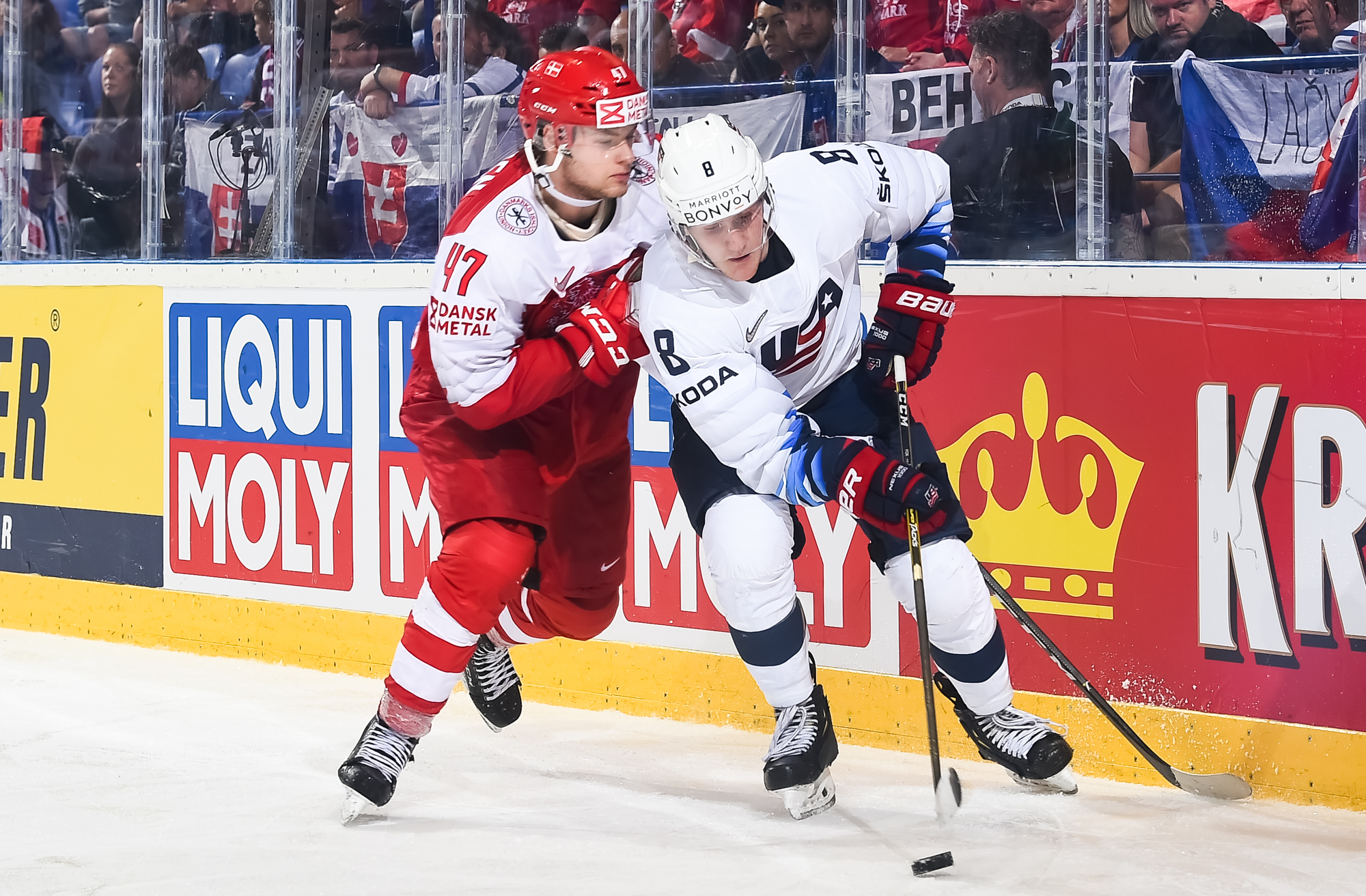 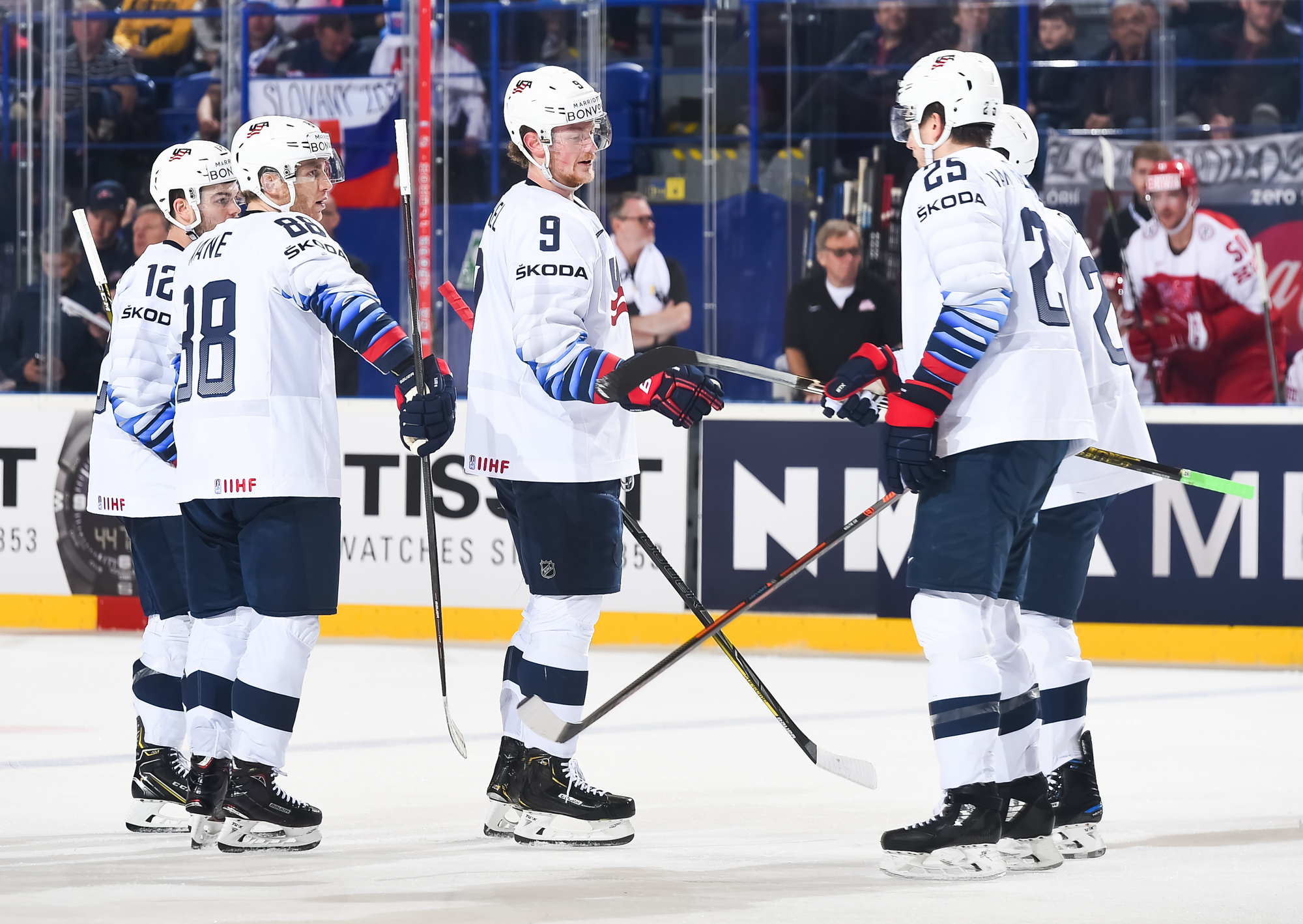 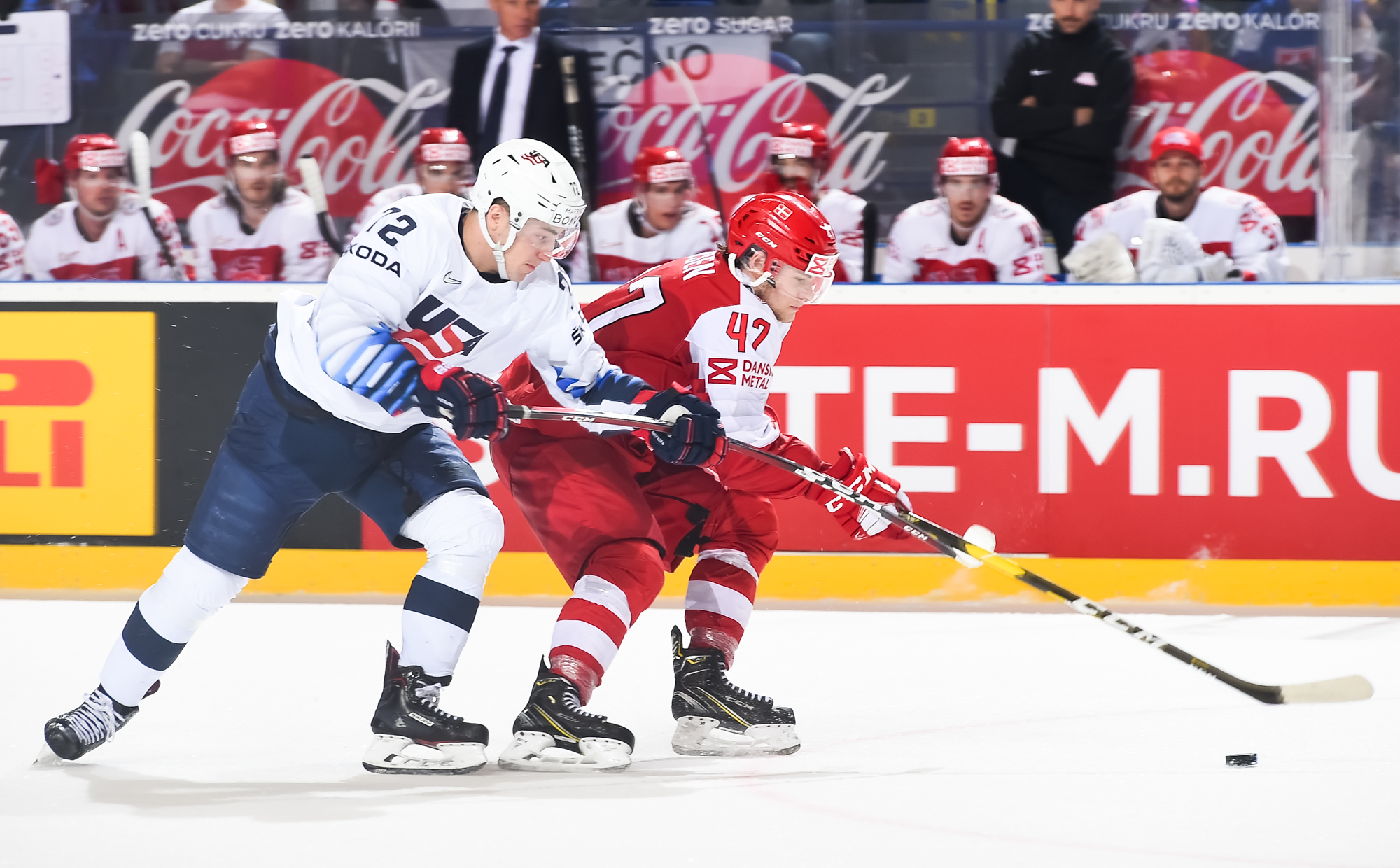 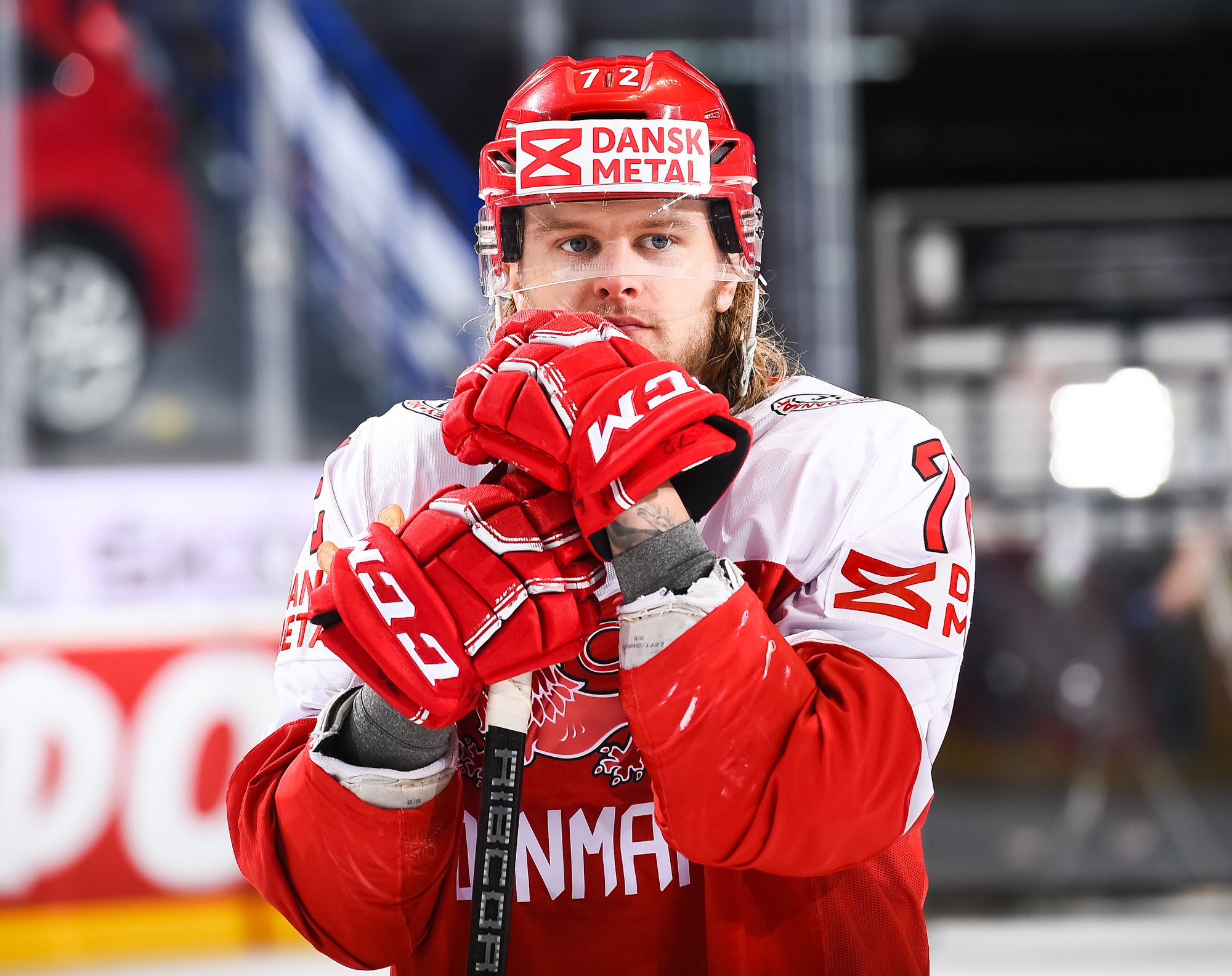 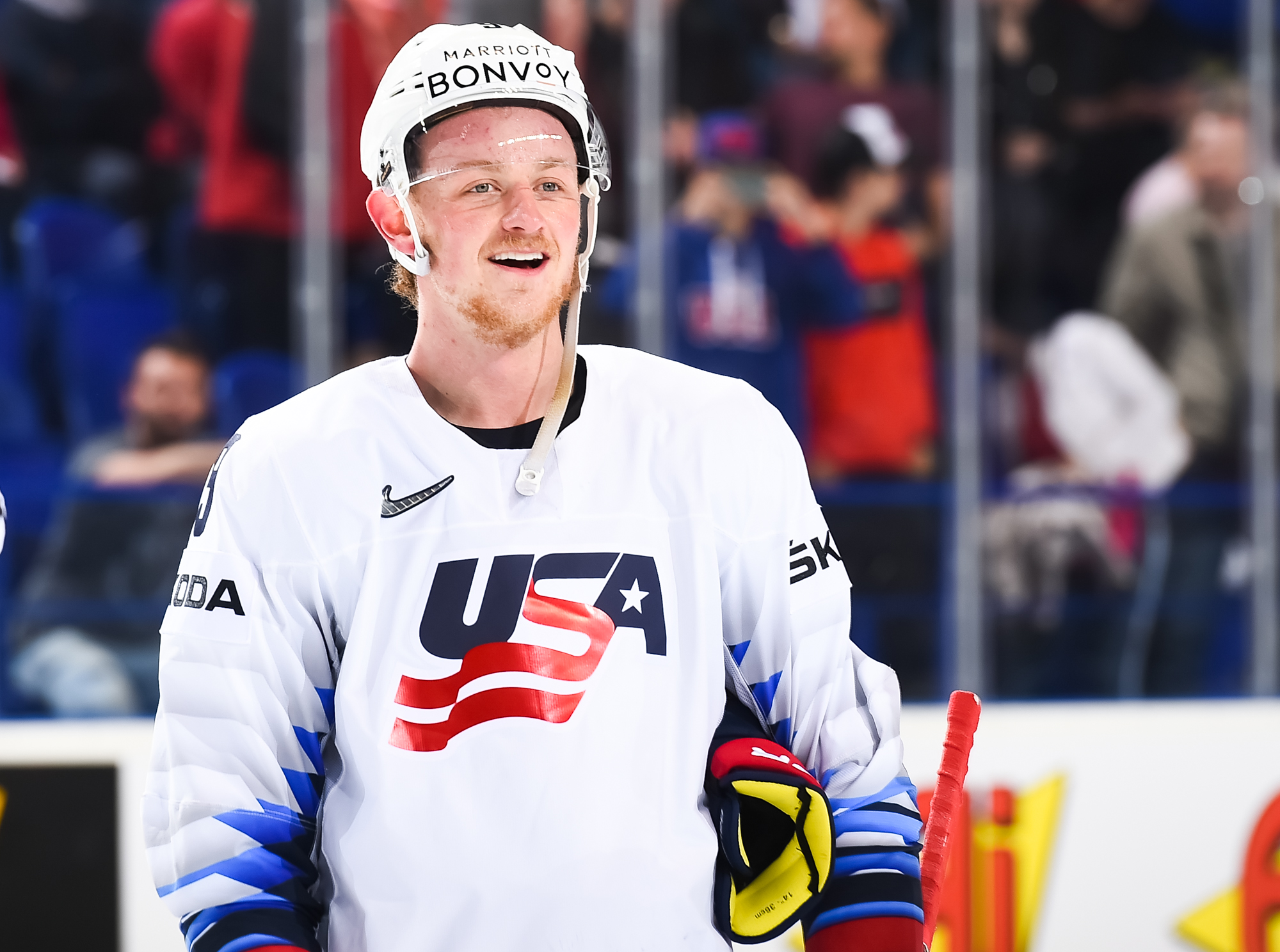 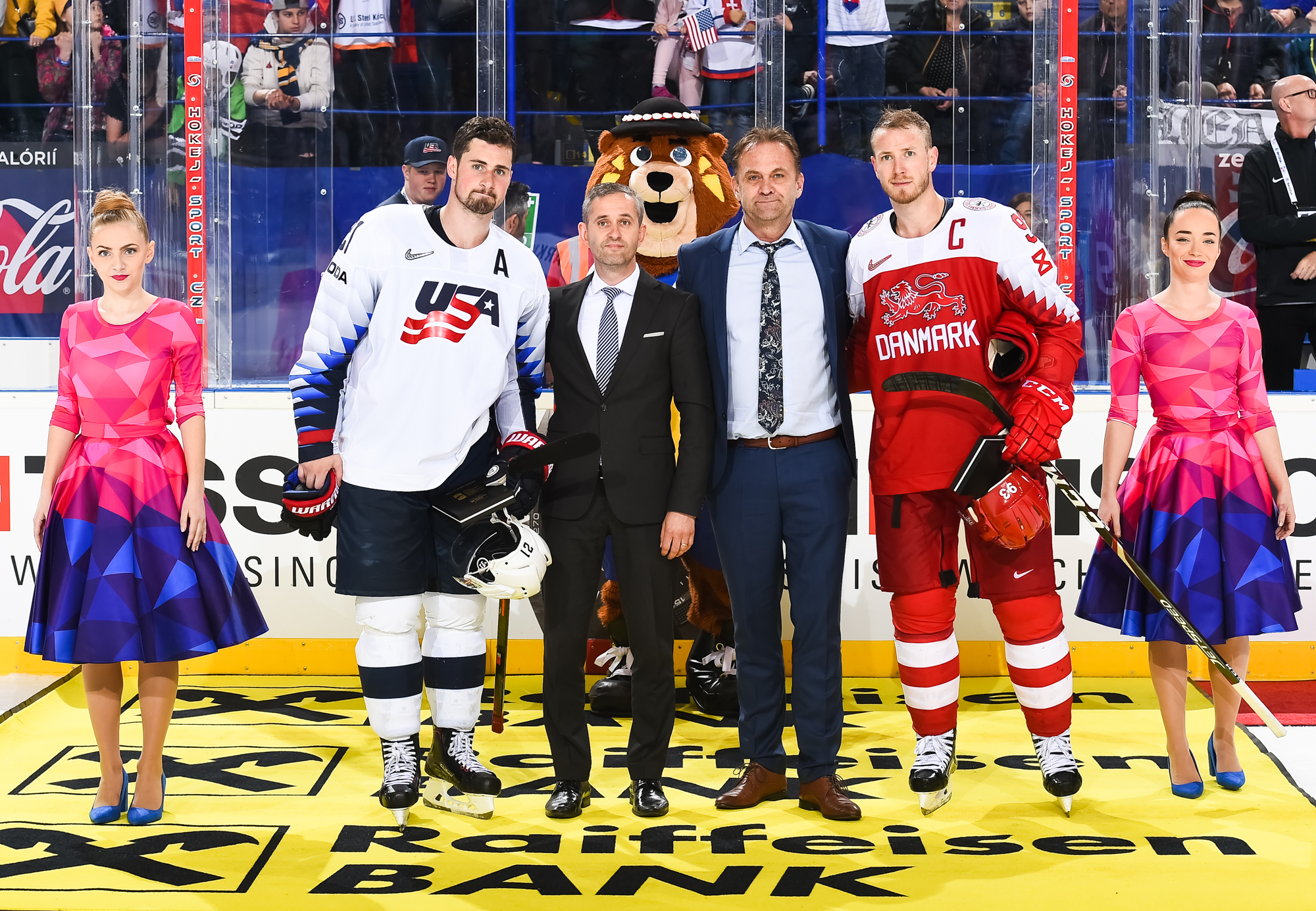 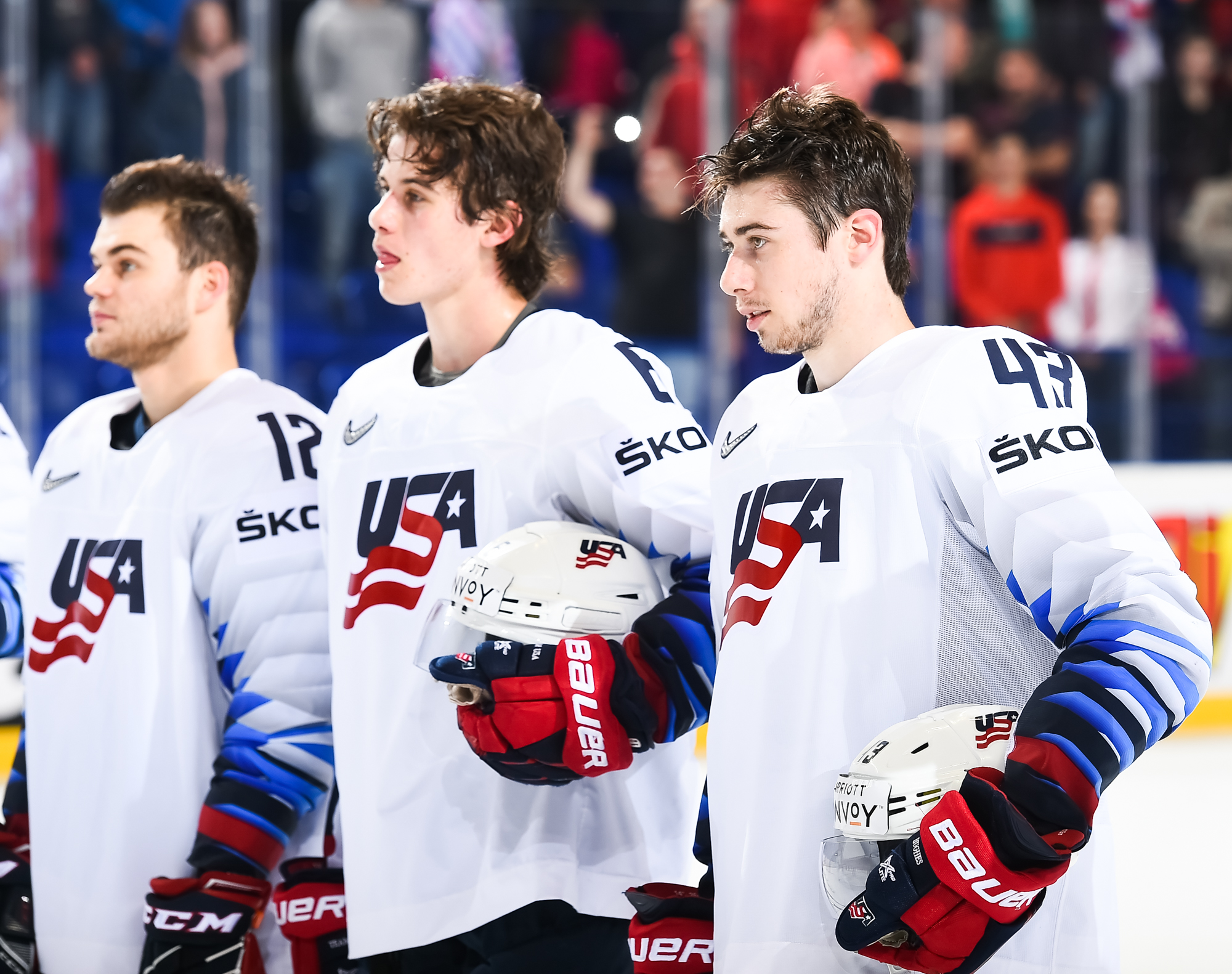