After two upset victories to kick off the 2019 U18 Worlds, the Belarusians came back down to earth on Sunday night. Canada won its third straight game in Umea, hammering Belarus 11-1. The Canadians dazzled with four power play goals.

"We've just got to celebrate the win for a bit and then reset and start looking toward our next game against the Czechs [on Tuesday]," said assistant captain Dylan Cozens, who starred with two goals and three assists. "It's a big one for us and it's the last one before the quarter-finals."

"We haven't really had a game like this since we've been here in Sweden," said Newhook. "To get that effort tonight, to really have that consistency throughout the game, I think, was huge for us. Just bringing that style we know we can play every shift, everyone really brought it tonight. That was the key for our success."

Belarusian netminder Rostislav Zinovenko, whose 58-save outing against Finland produced a 4-3 win, was unable to repeat his magic, and was pulled halfway through. Canada outshot Belarus 60-42 as Nolan Maier, the starting goalie of the WHL's Saskatoon Blades, made a victorious U18 debut.

"We had a really good start [to the tournament] and maybe just didn't take it as seriously and just thought we could have played well against these guys too," said Belarus forward Ilya Usov. "But we didn't battle well enough and didn't have a good start."

Vitali Pinchuk had the lone goal for Belarus, which can still wrap up Group A with a winning record by beating Switzerland on Monday.

The country that produced such NHLers as Ruslan Salei, Mikhail Grabovski and the Kostitsyn brothers is building for the future with a centralized junior model similar to USA Hockey's National Team Development Program.

However, it is no easy matter to catch up with Hockey Canada and the talent-rich Canadian major junior hockey leagues. Belarus has built more indoor rinks over the last 10 years, but still only has 38 to Canada's 3,300.

Cozens pointed back to Canada's 6-5 overtime win over Belarus before the tournament: "We took them lightly a little bit in exhibition and they came out hard. They were 2-0 in this tournament, too, so we know they're a good team and they battle hard. So we weren't taking them lightly today."

World Men U18
Belarus vs. Canada - 2019 IIHF Ice Hockey U18 World Championship
After two upset victories to kick off the 2019 U18 Worlds, the Belarusians came back down to earth on Sunday night. Canada won its third straight game in Umea, hammering Belarus 11-1.
BLR CAN 21 APR 2019

When Danil Martynov was caught closing his hand on the puck, Belarus paid an early price. Canada opened the scoring with a power play goal at 4:24. Zary, standing in front of the net, redirected a quick feed from Philip Tomasino.

Belarus failed to capitalize on a two-man advantage that lasted 0:45, and was forced to rely on its goalie. Zinovenko foiled a lunging Jamieson Rees when the Sarnia Sting attacker surged to the net and caught a break when Thomas Harley hit the post. But the luck wouldn't last.

In the final minute of the opening stanza, the Canadian forecheck raised a little hell, to borrow a phrase from Trooper. Cozens got the puck out front to Newhook, who whipped it past a flailing Zinovenko at 19:57.

To kick off the second period, Zary was sent off for a hit from behind on Belarusian assistant captain Danila Pavliko. But the power play backfired. At 34 seconds, Schneider was sprung on a shorthanded break by Rees and beat Zinovenko cleanly on the stick side.

At 9:02, with the Canadians swarming the crease, Newhook popped in a rebound for a 5-0 lead. Just 40 seconds later, Legare finished off a lovely rush for the sixth Canadian marker.

Zinovenko's night was over. The 18-year-old was mercifully replaced by Alexei Kolosov, who backstopped his country to the opening 4-3 win over the Czechs.

Cozens capitalized on more confusion in the Belarusian crease, converting his own rebound for a 7-0 lead at 17:28. The play was reviewed to see if the Lethbridge Hurricanes sniper had interfered with Kolosov, but it was ruled a good goal.

Thirteen seconds later, Krebs swooped in unimpeded to make it 8-0 with his third of these U18 Worlds. The record for the fastest back-to-back goals in U18 history is five seconds, set by Russia in an 8-3 romp over Germany in 2002.

"Our motto is 'We Before Me,'" said Canada's Jakob Pelletier. "I think we did that for 60 minutes again."

There was one bright spot for the underdogs. At 18:49, after a faceoff in Canada's zone, an open Pinchuk winged a power play goal past Maier to spoil the rookie's shutout bid.

Unsurprisingly, things were a little chippy down the stretch. This was the biggest margin of victory ever for Canada versus Belarus in U18 play. The Canadians won 11-3 in 2010.

"We just have to keep up our heads up and forget this day," Usov said. "Get ready for tomorrow and go battle."

The only time Belarus has beaten Canada at this tournament was in the very first meeting, a 5-3 win in Slovakia in 2002. Five players on this Belarus roster were not even born at the time. Ditto for Canada's Daemon Hunt. 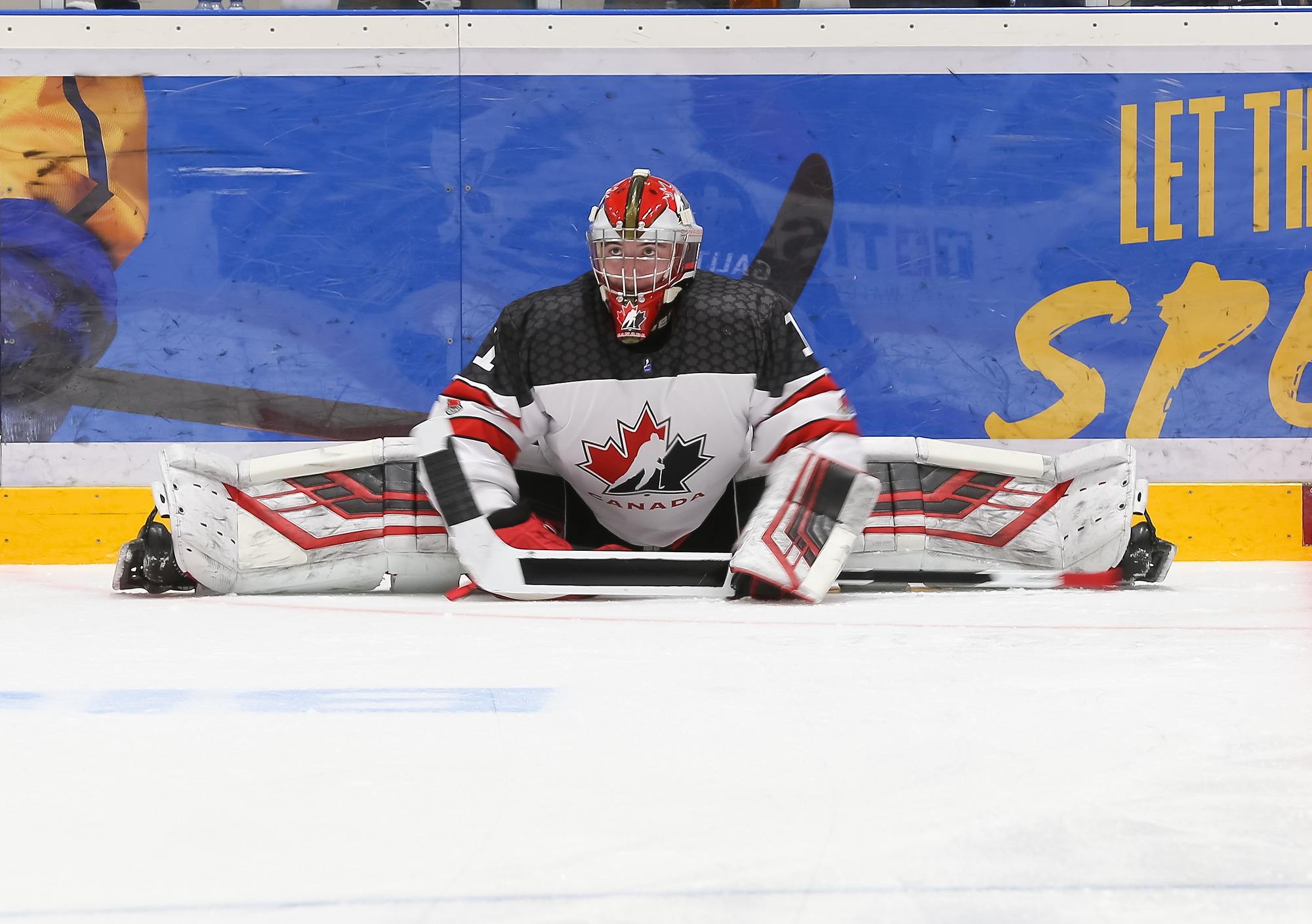 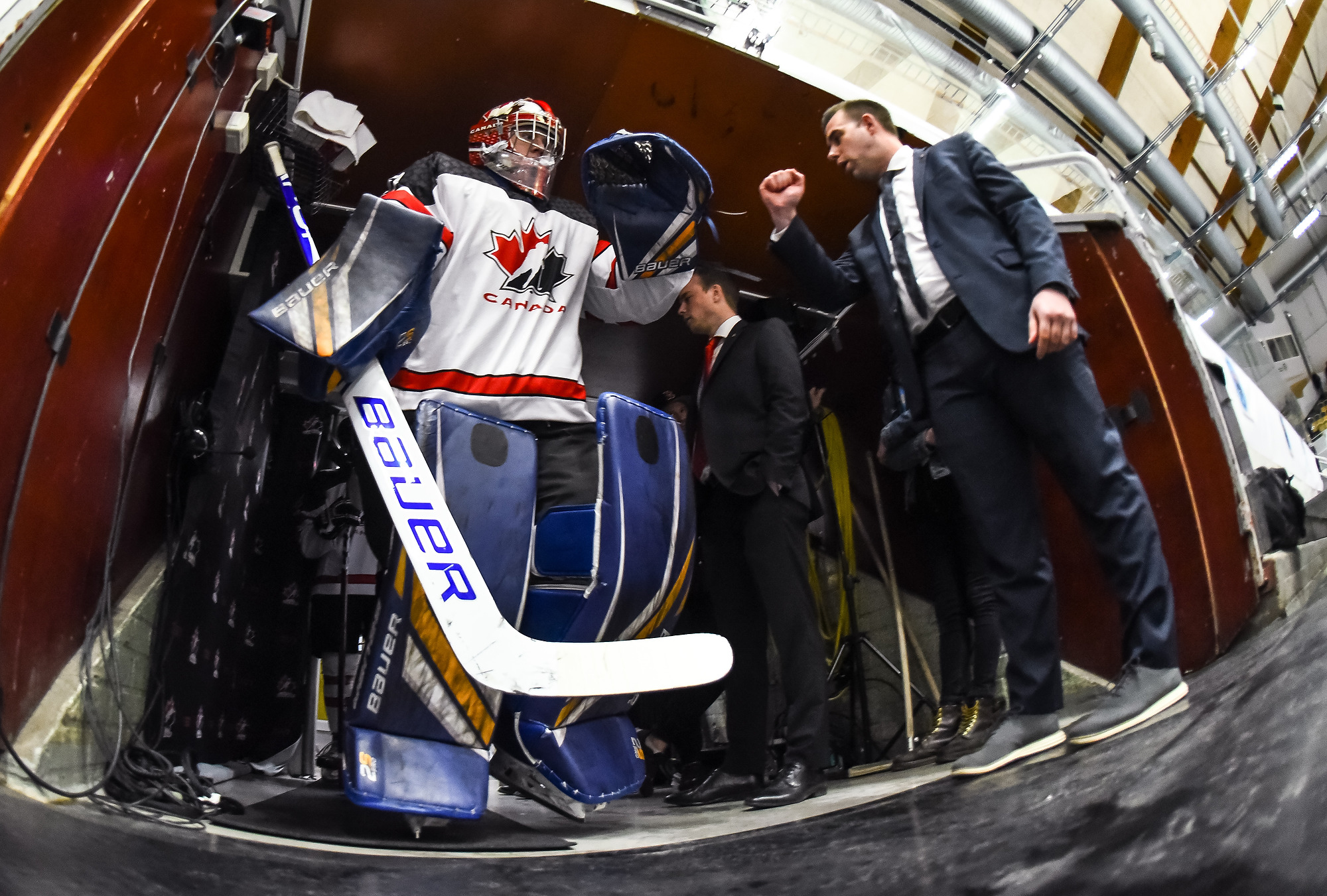 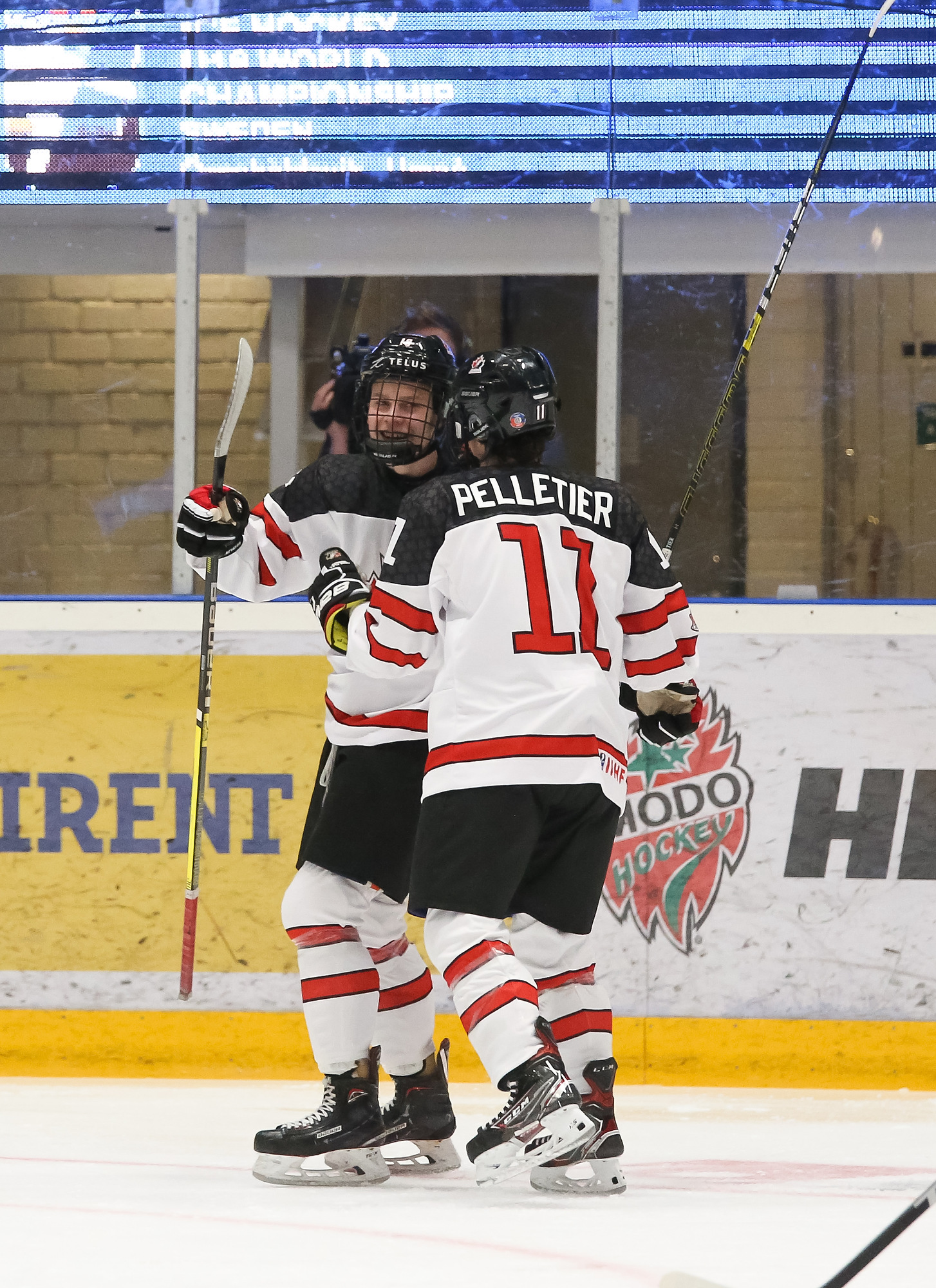 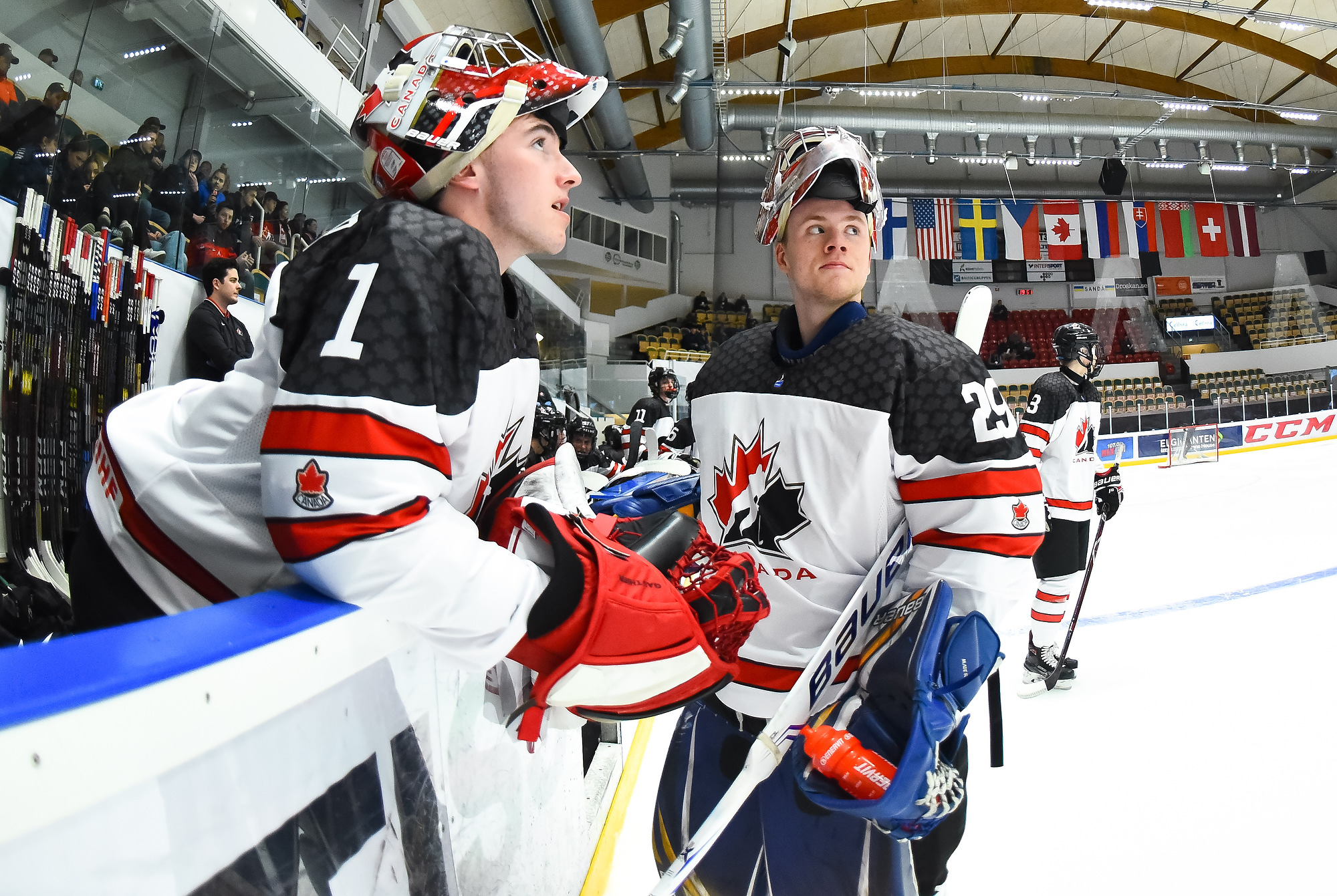 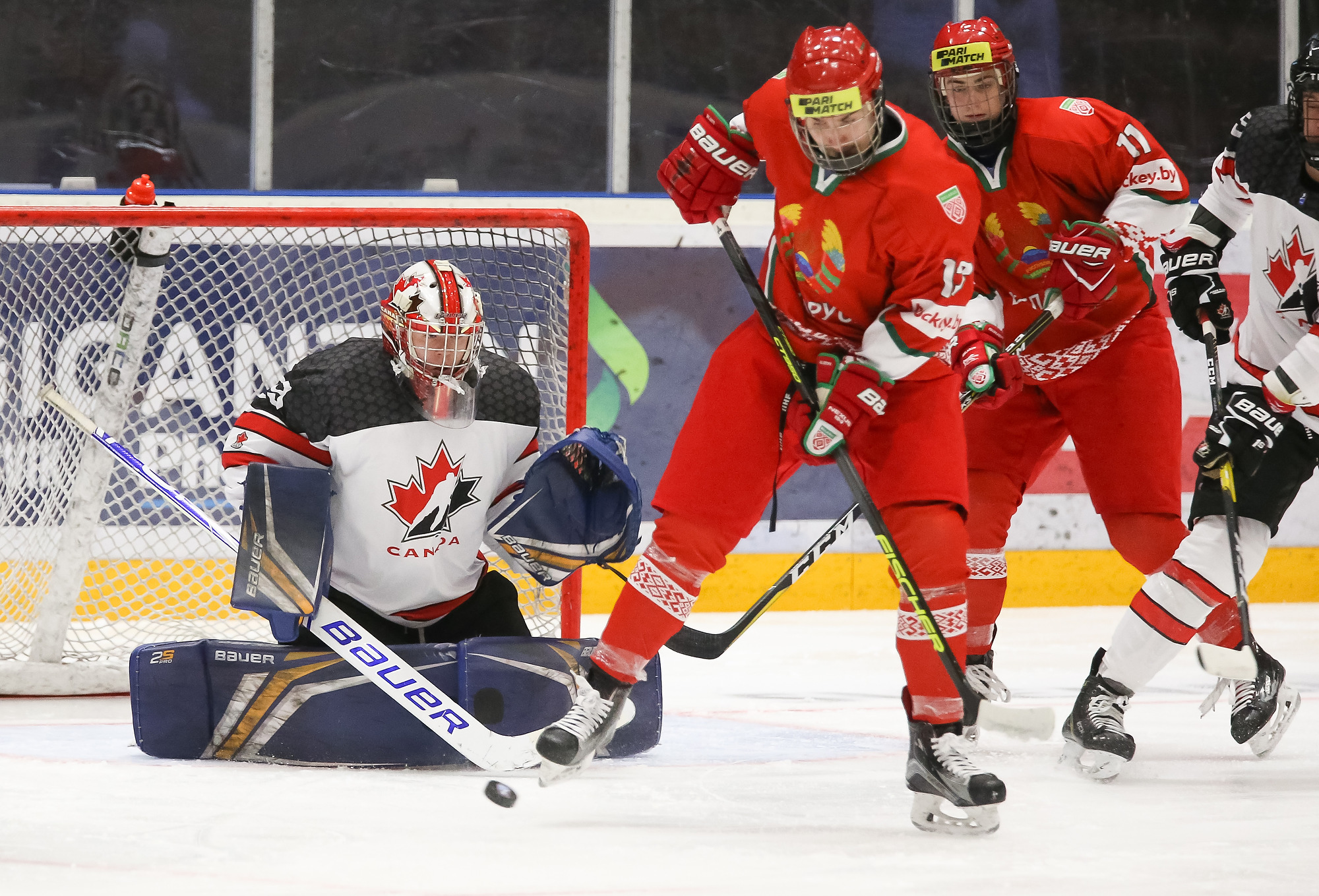 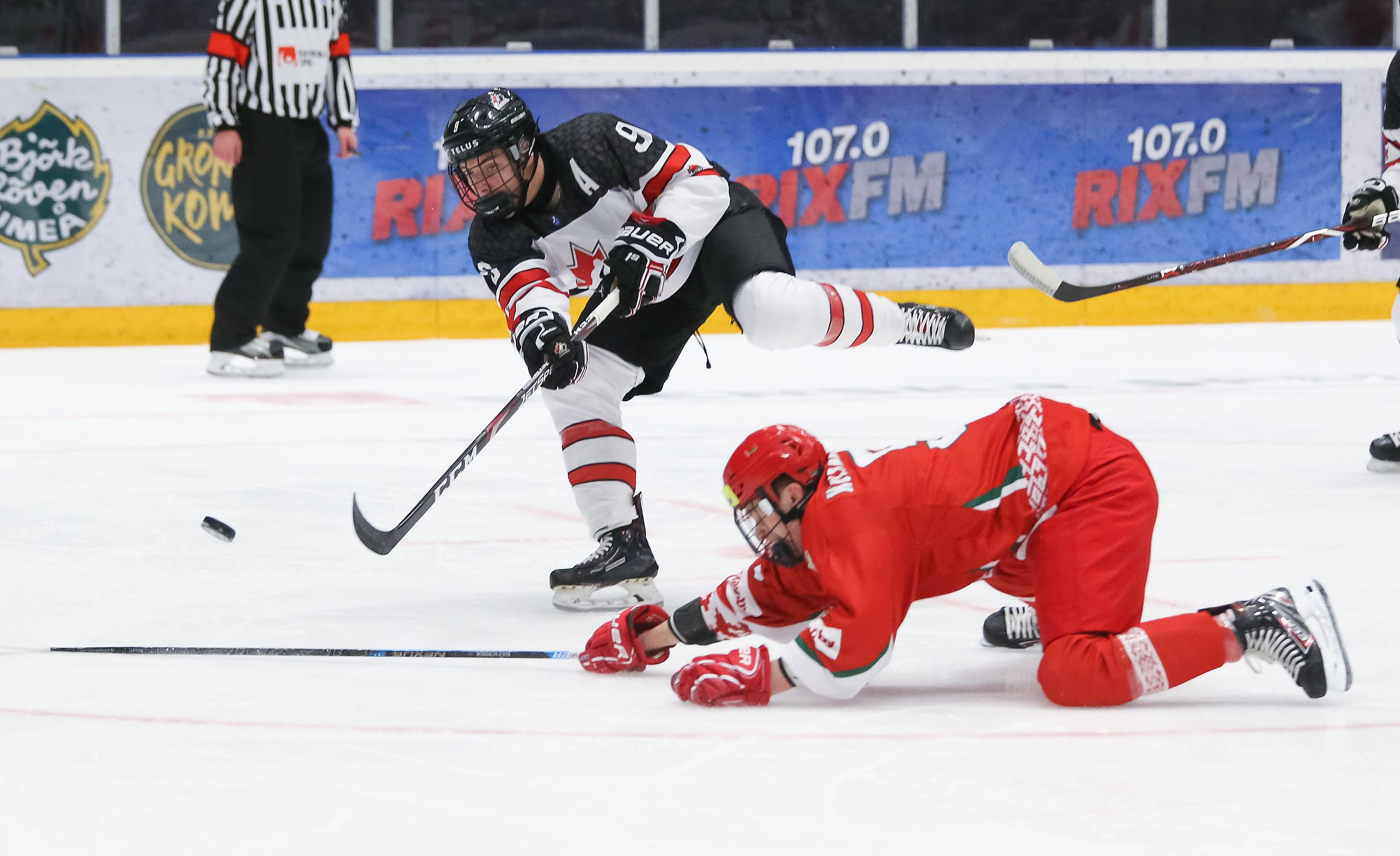 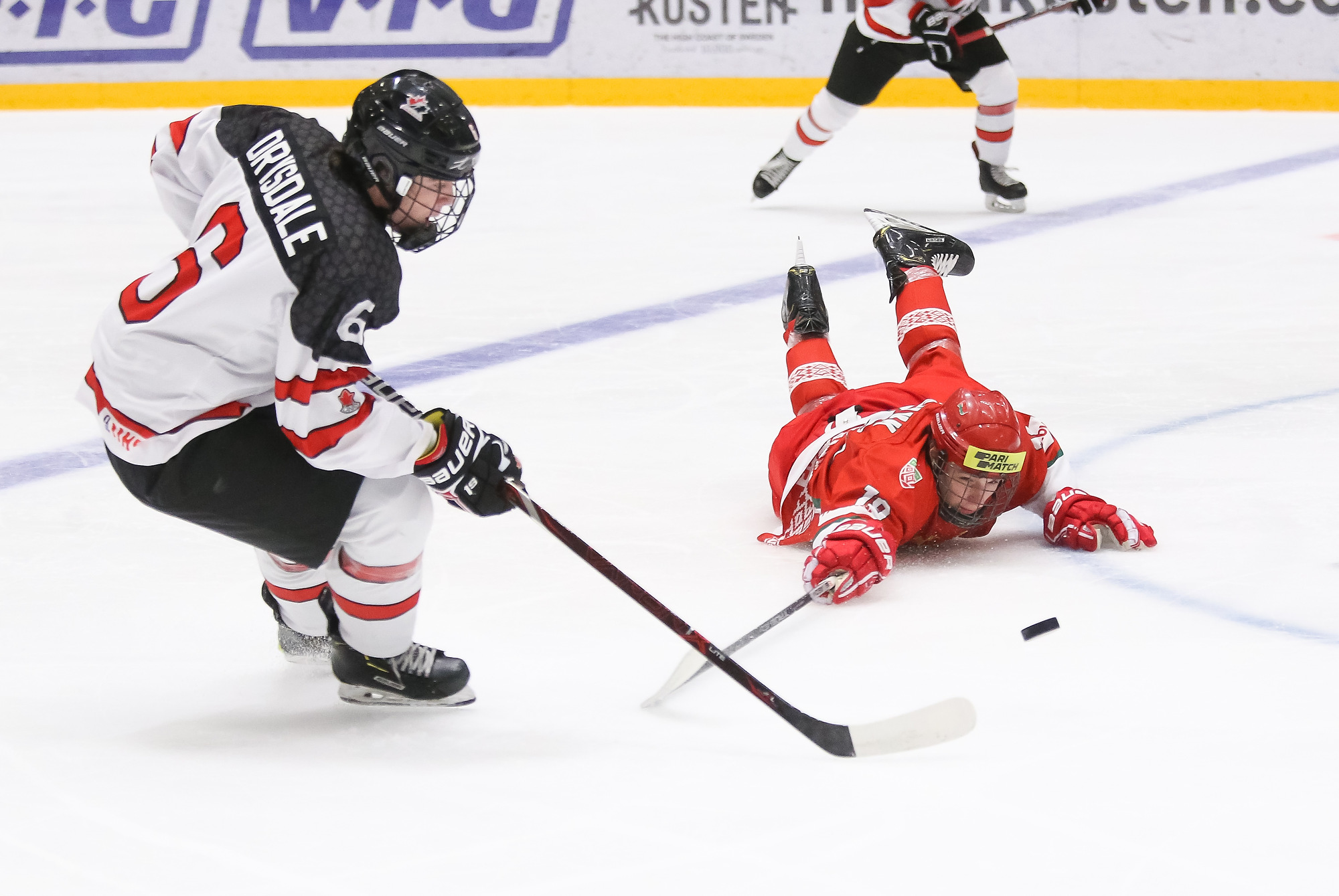 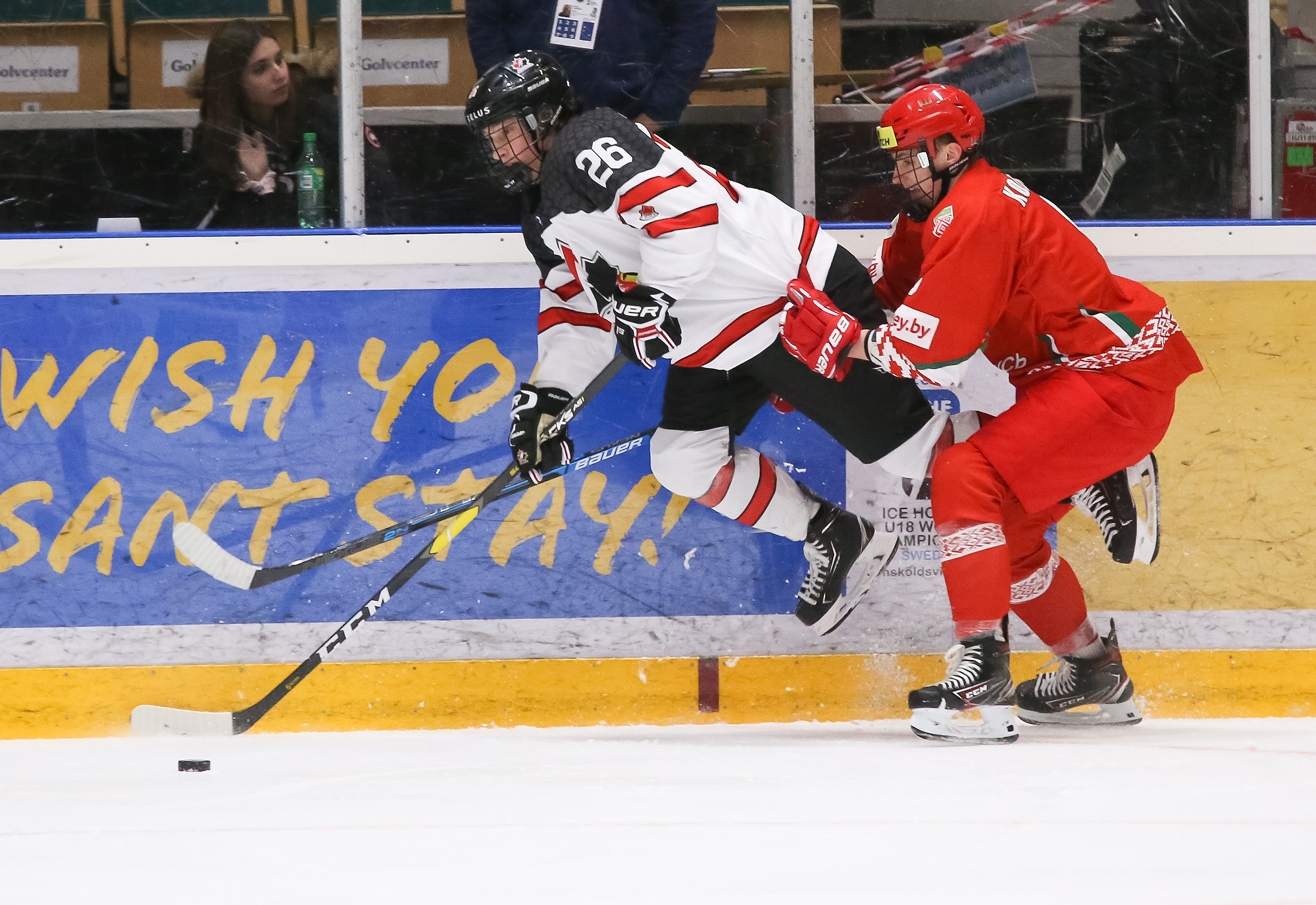 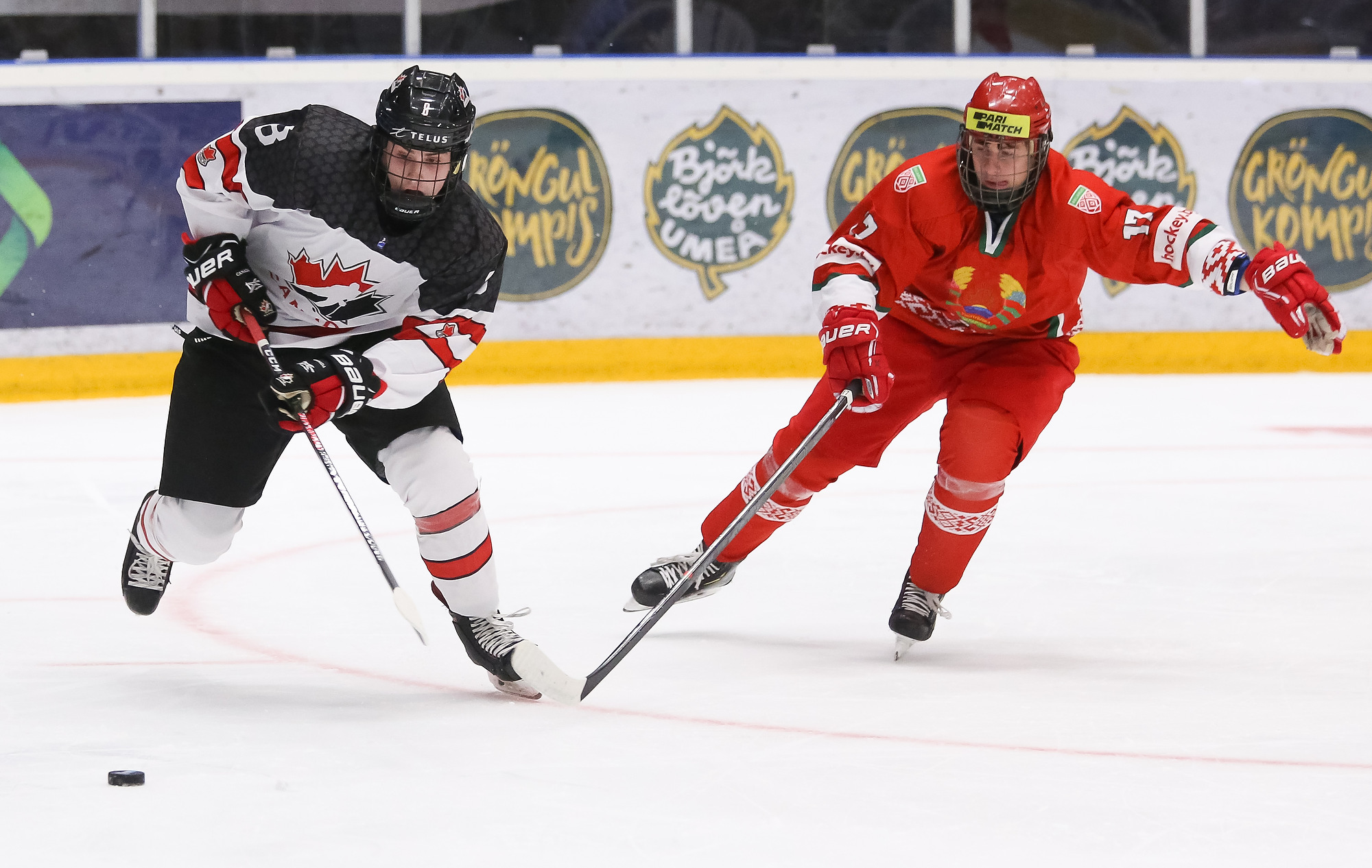 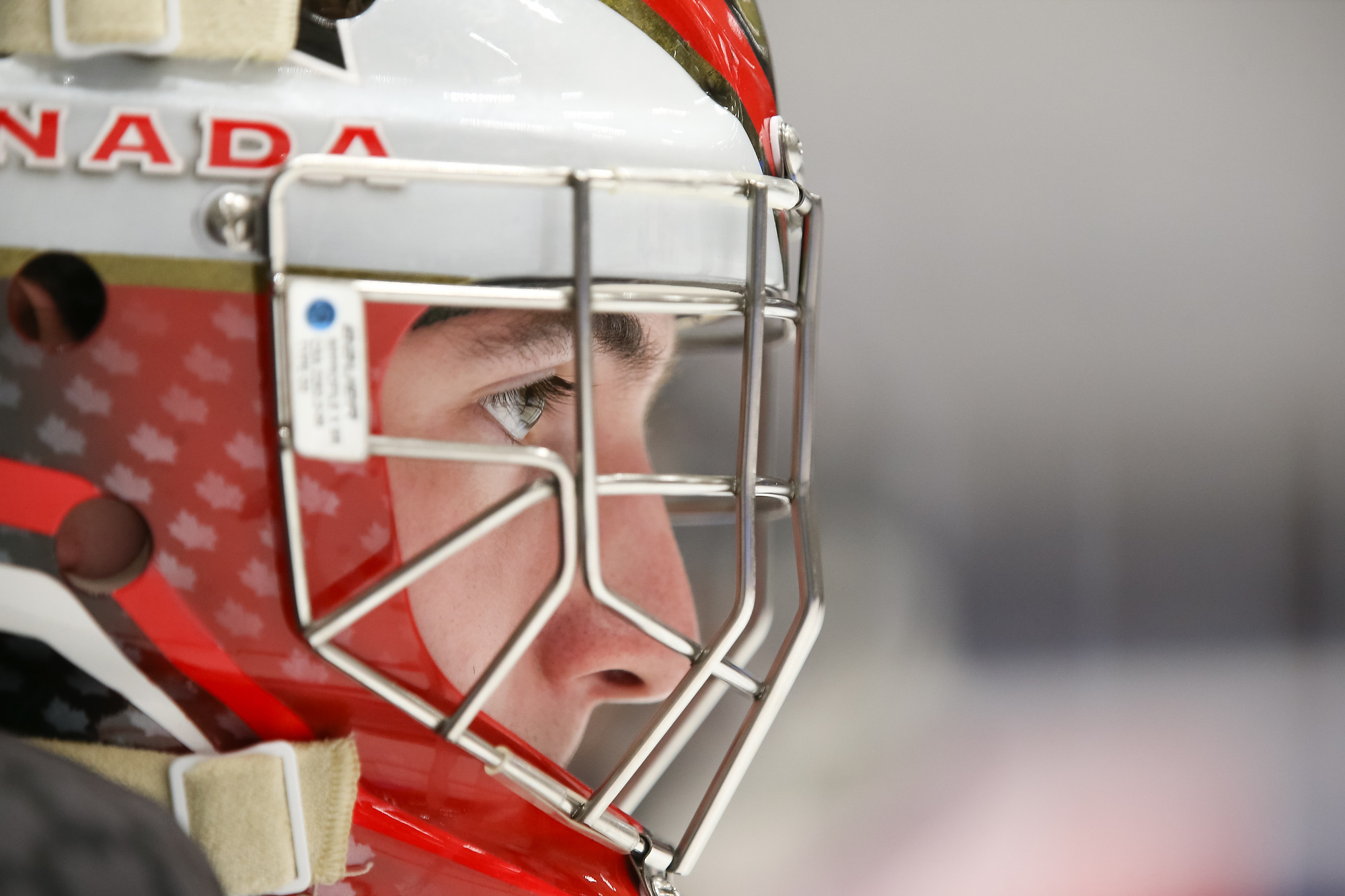 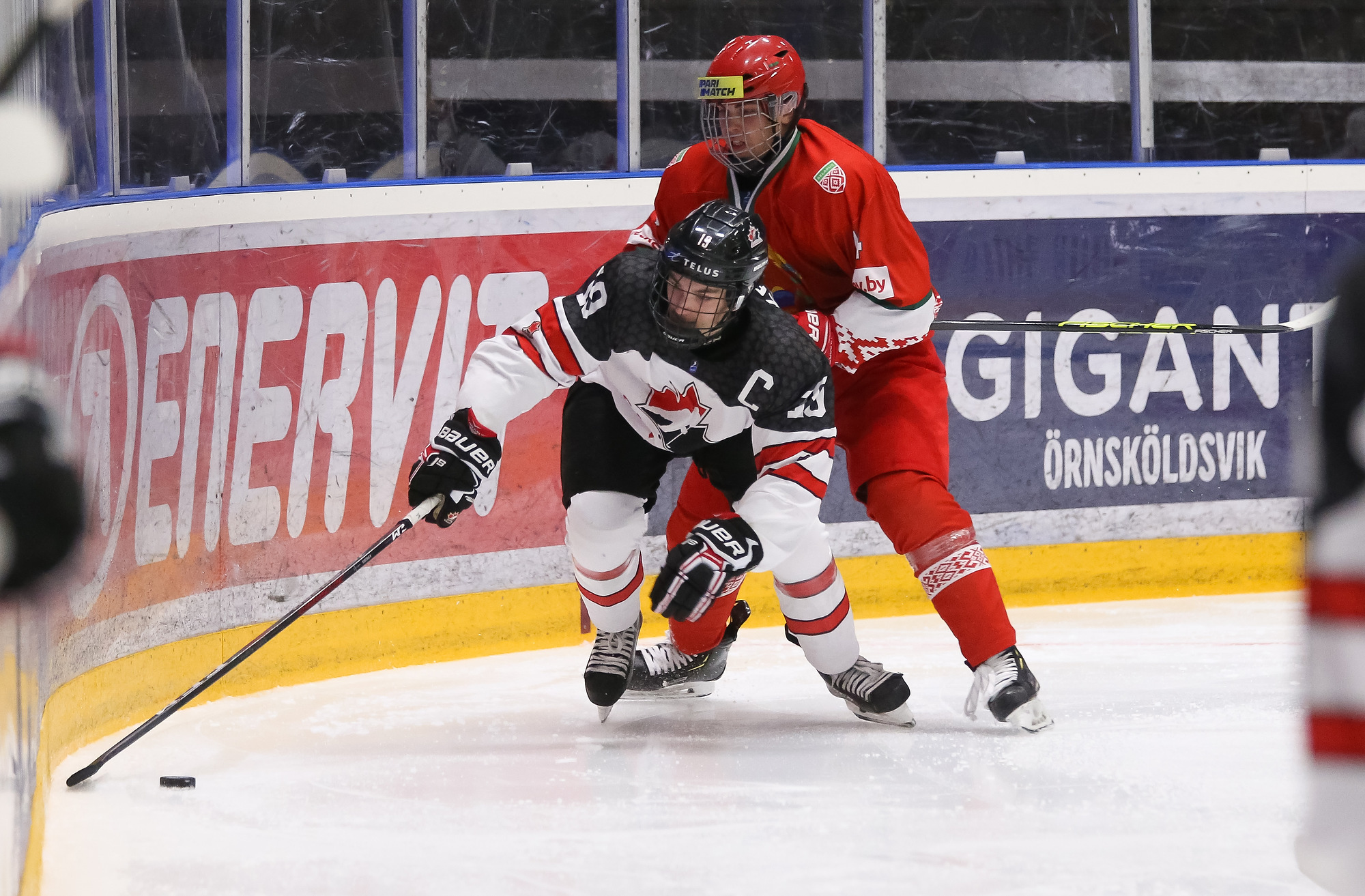 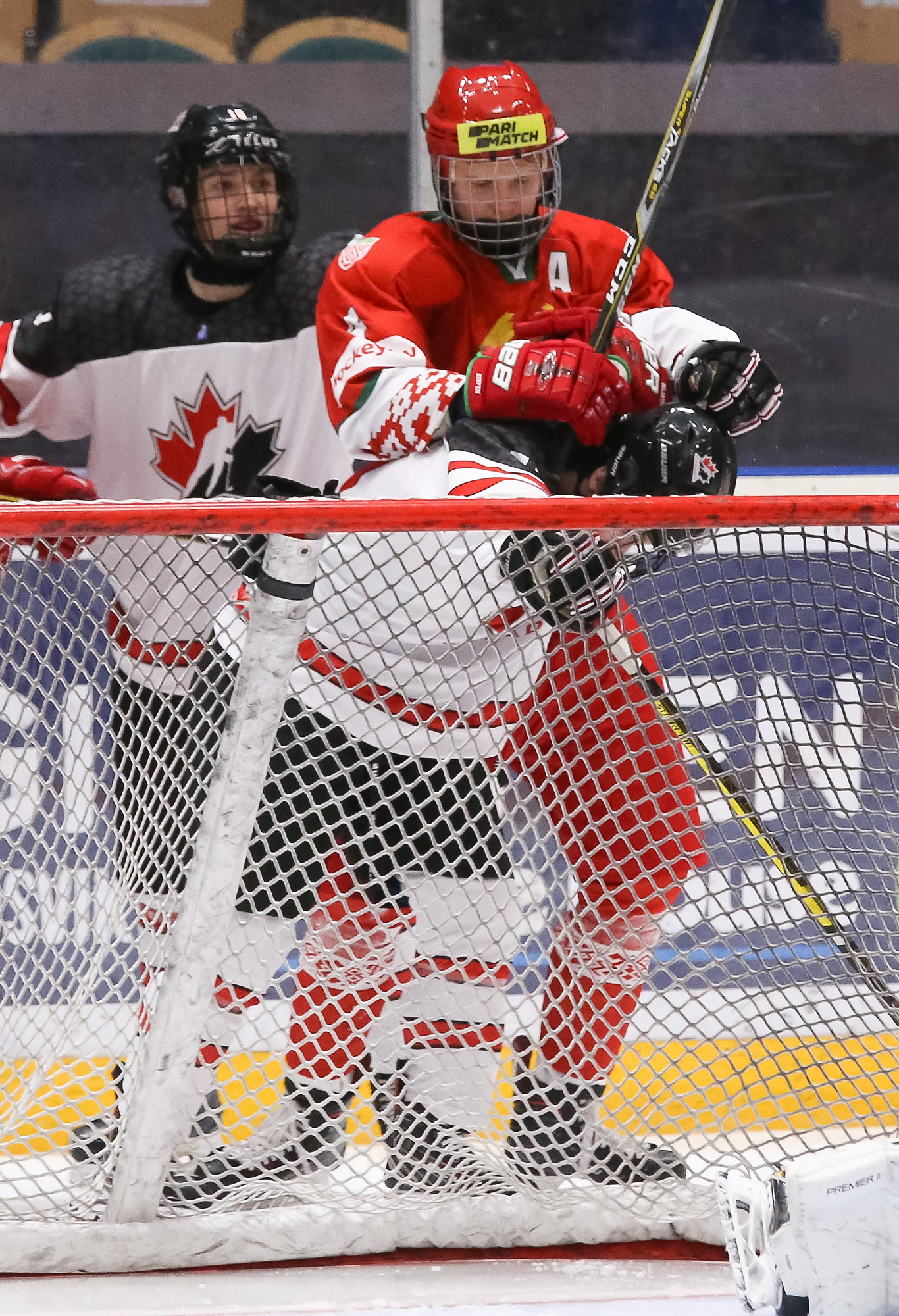 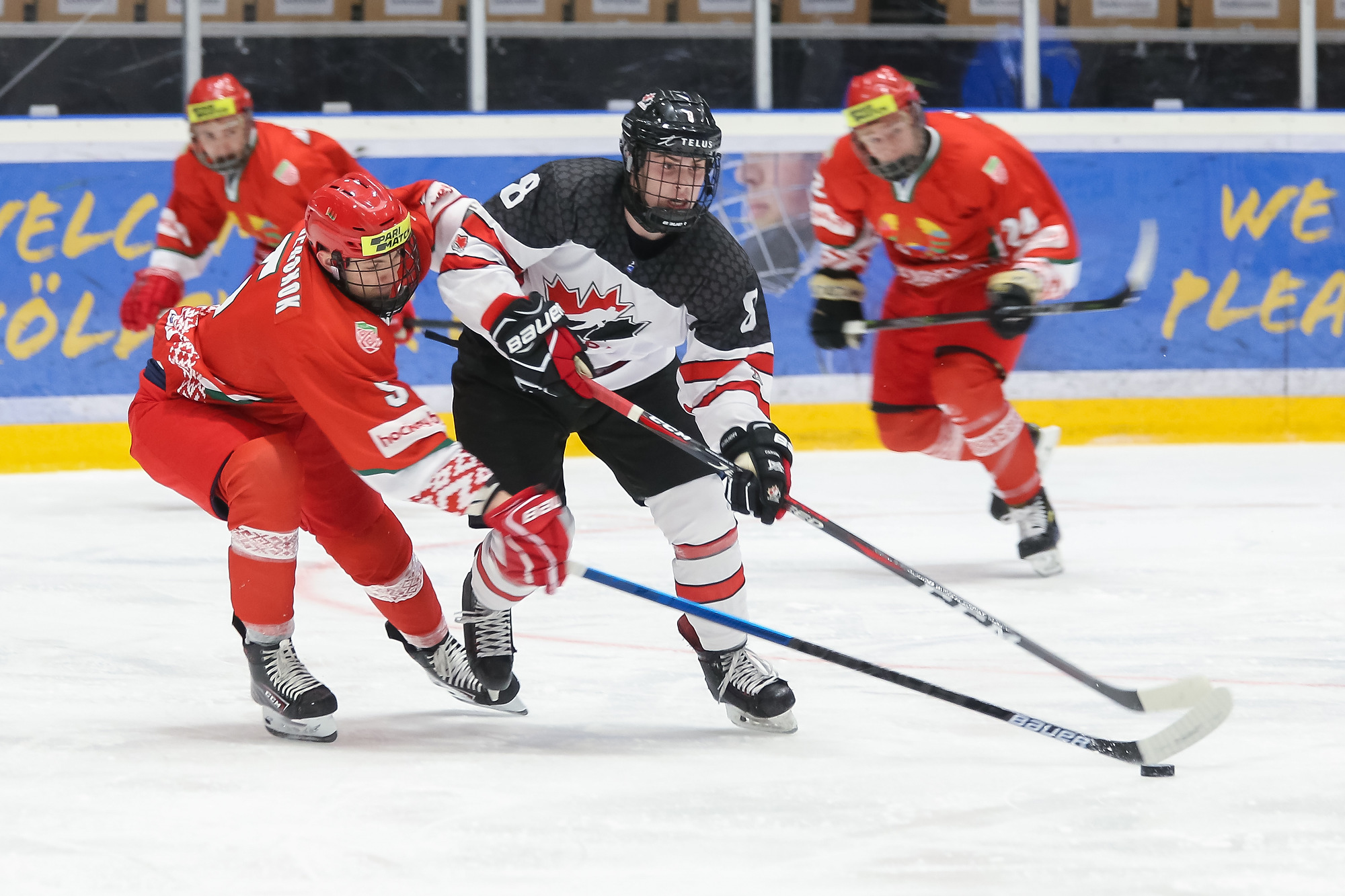 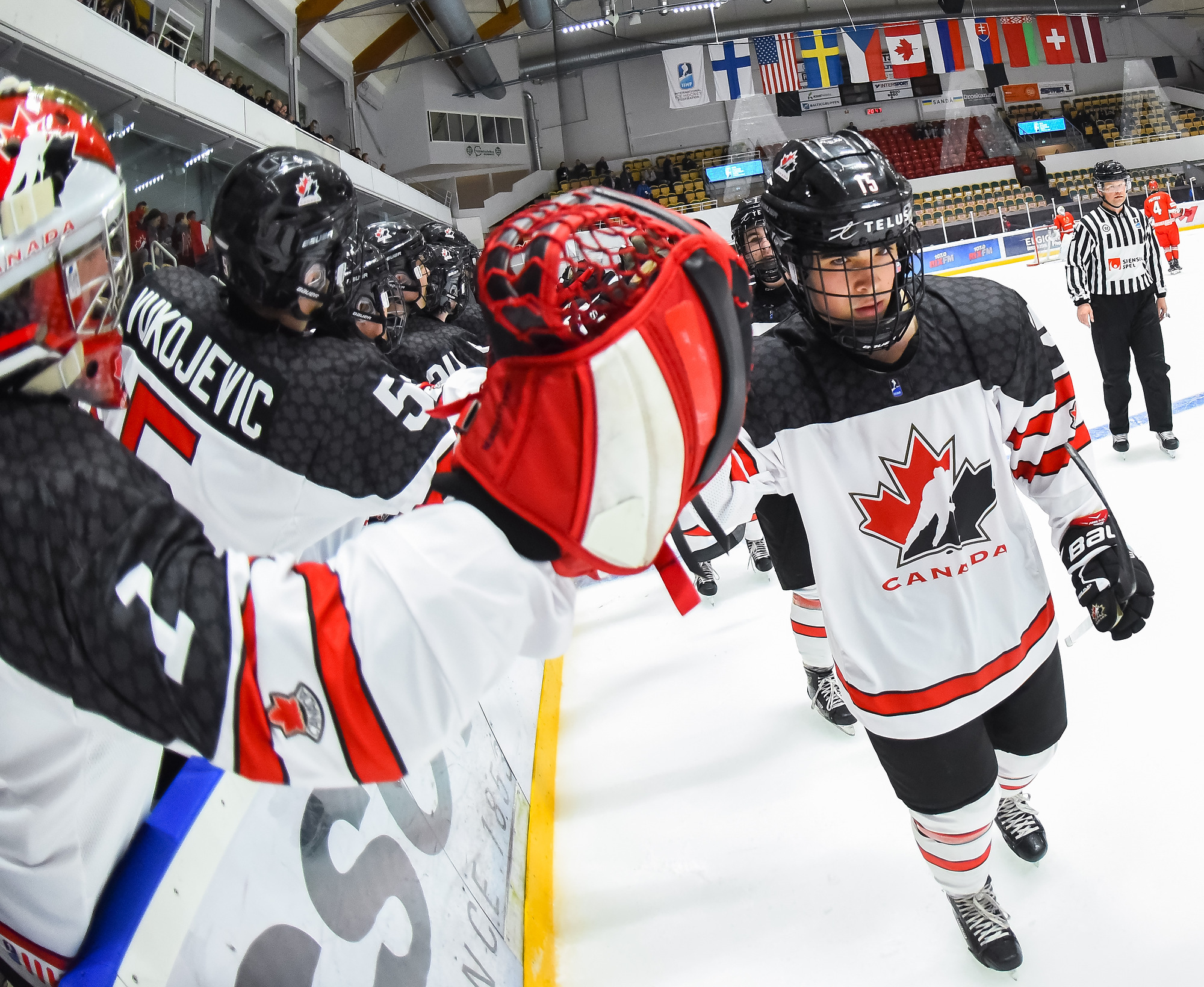 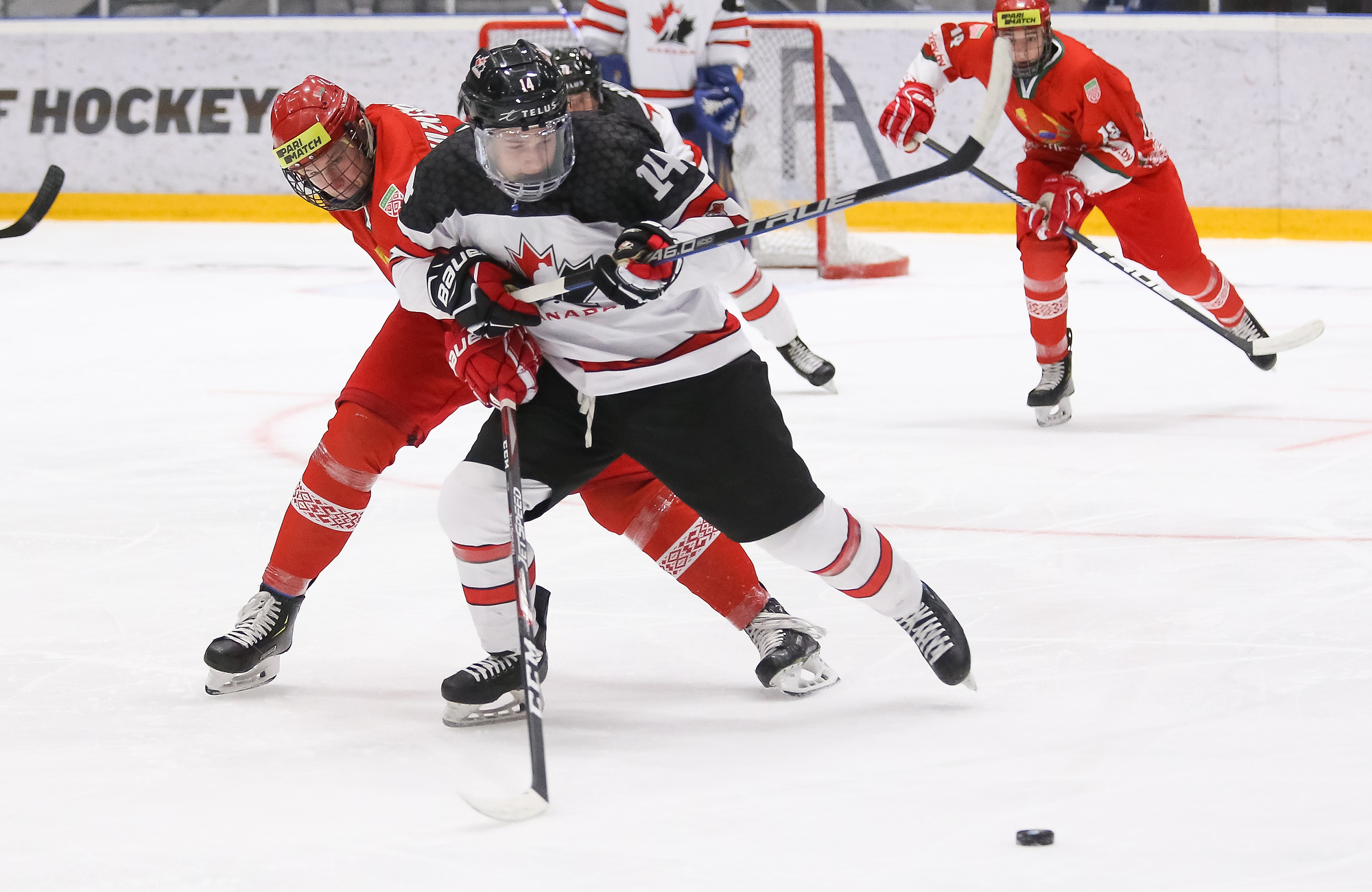 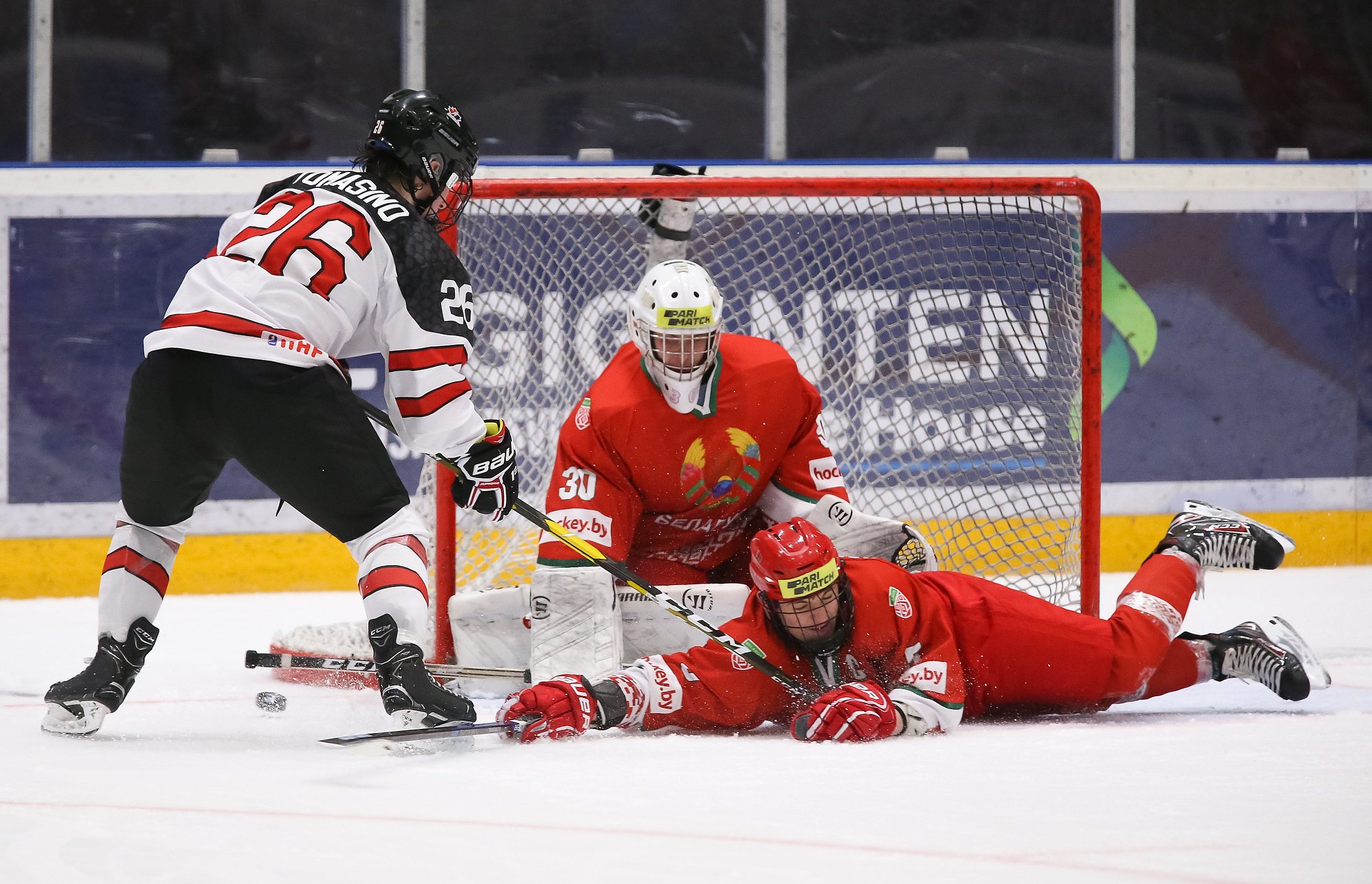 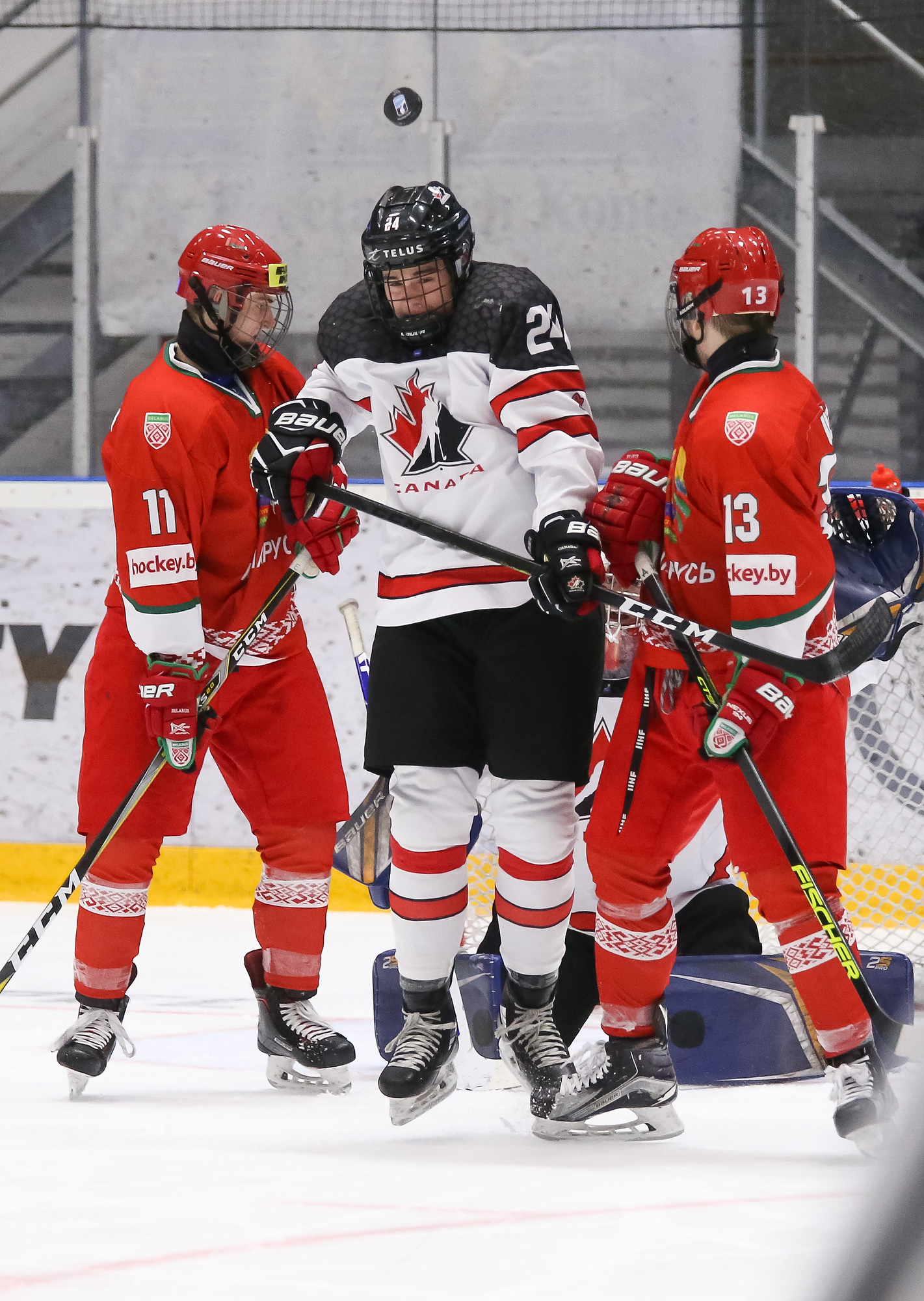 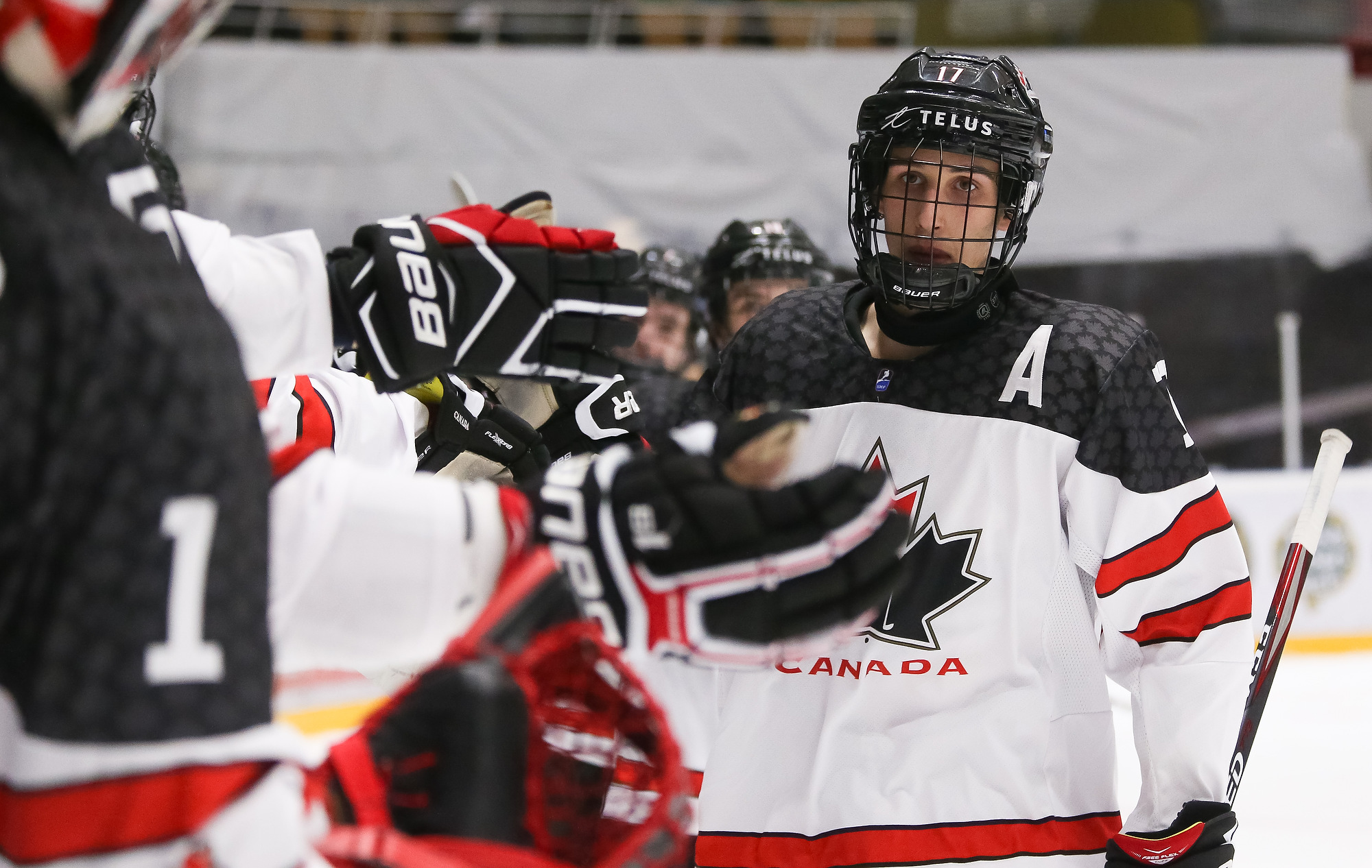 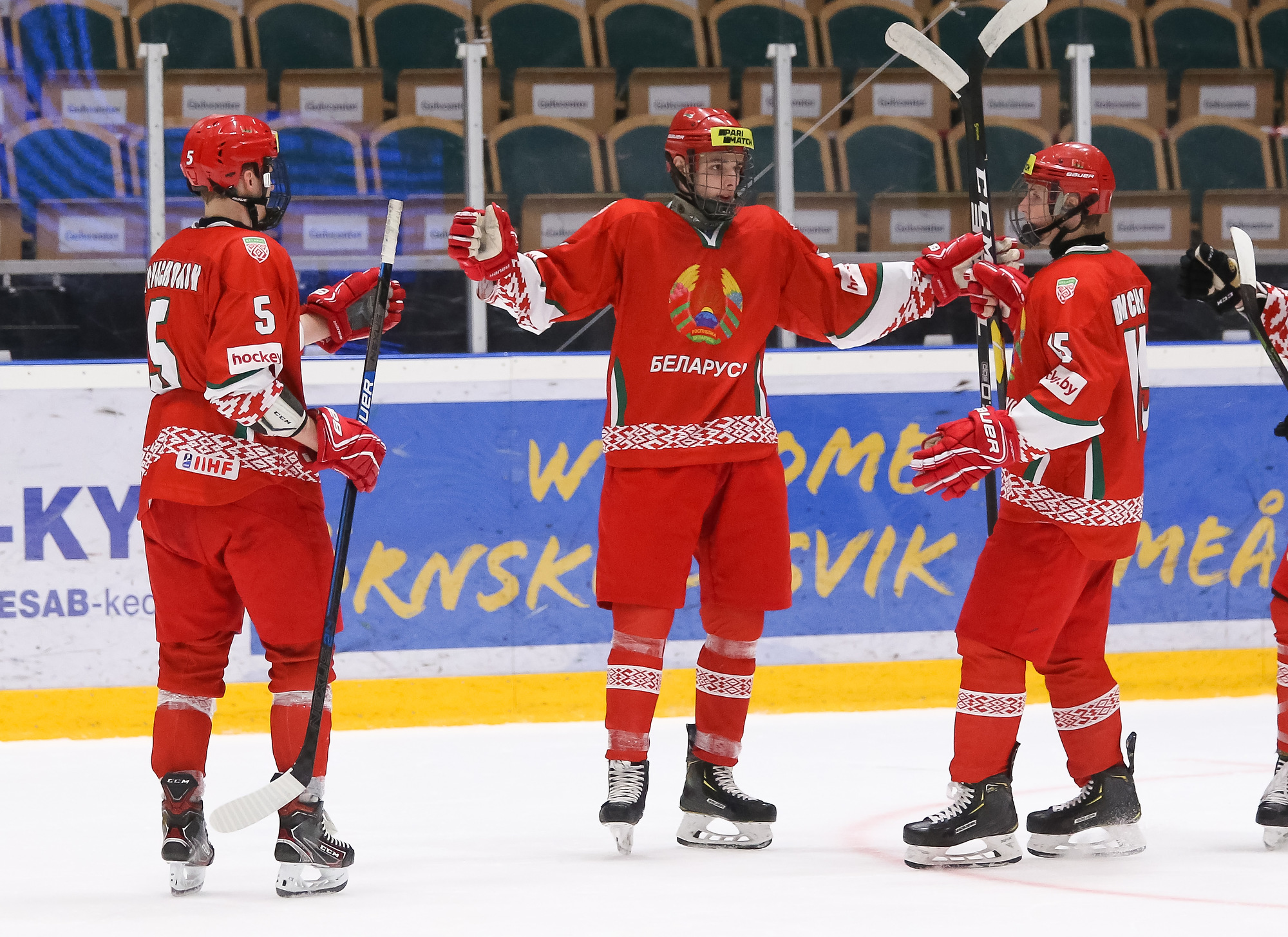 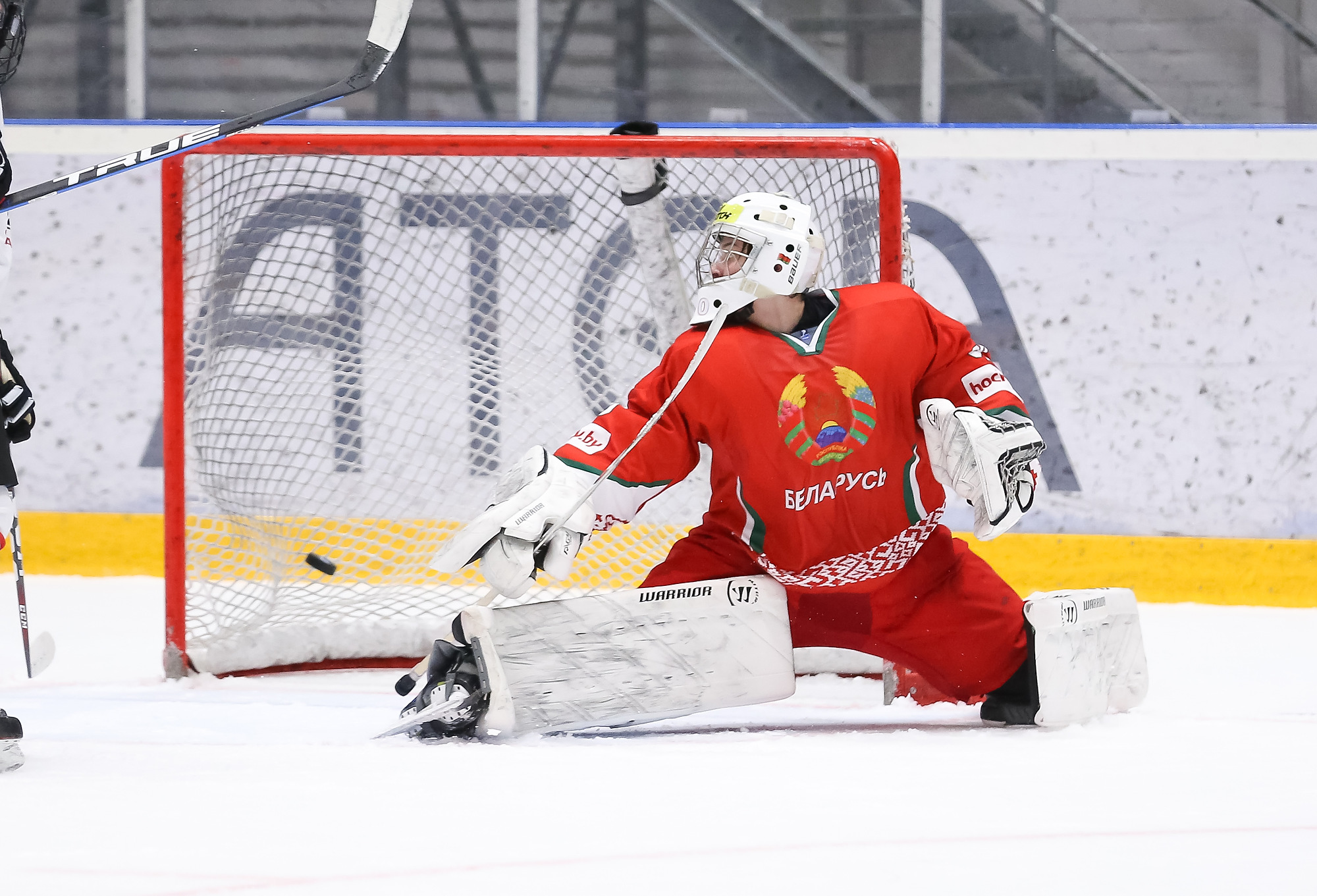 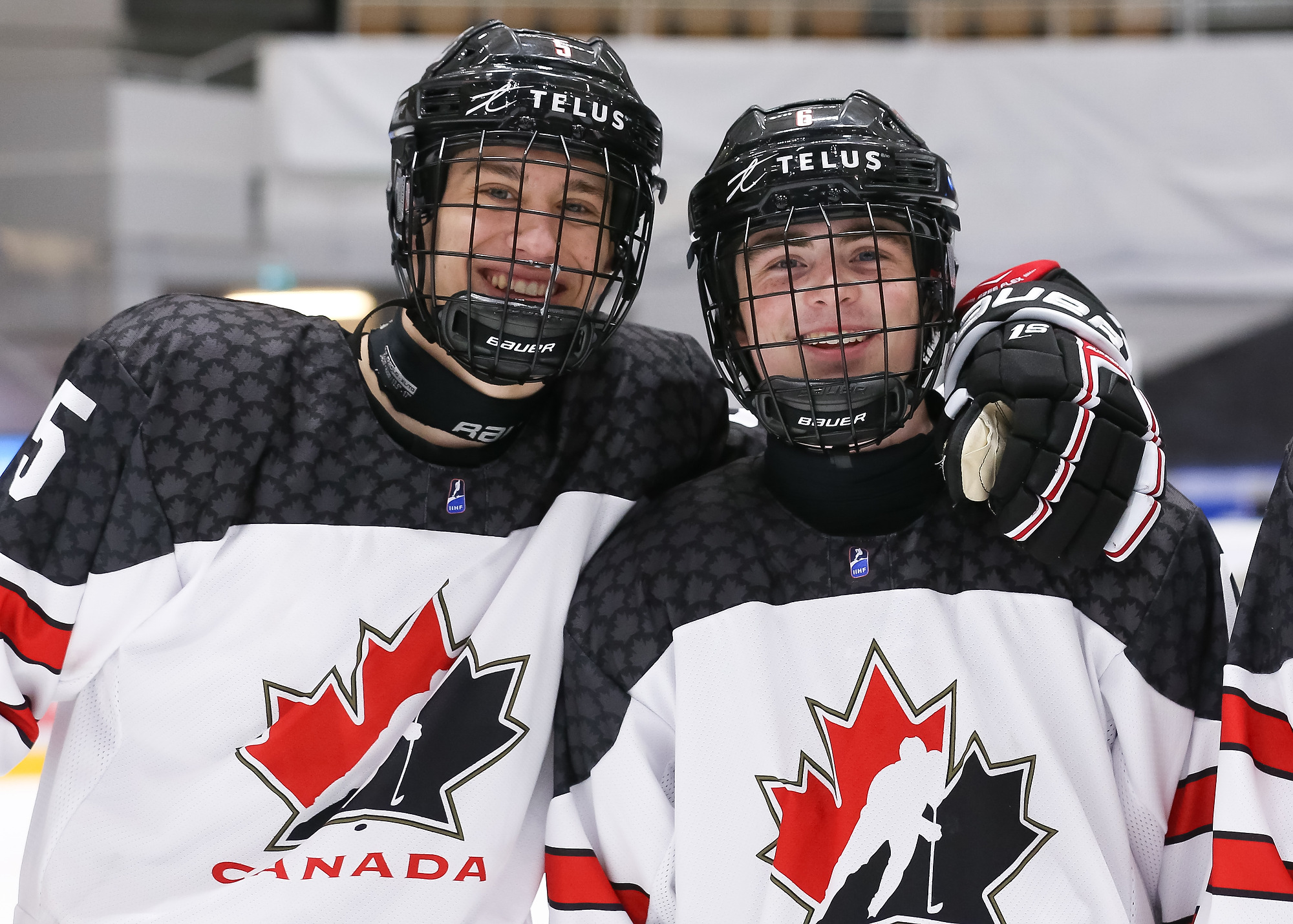 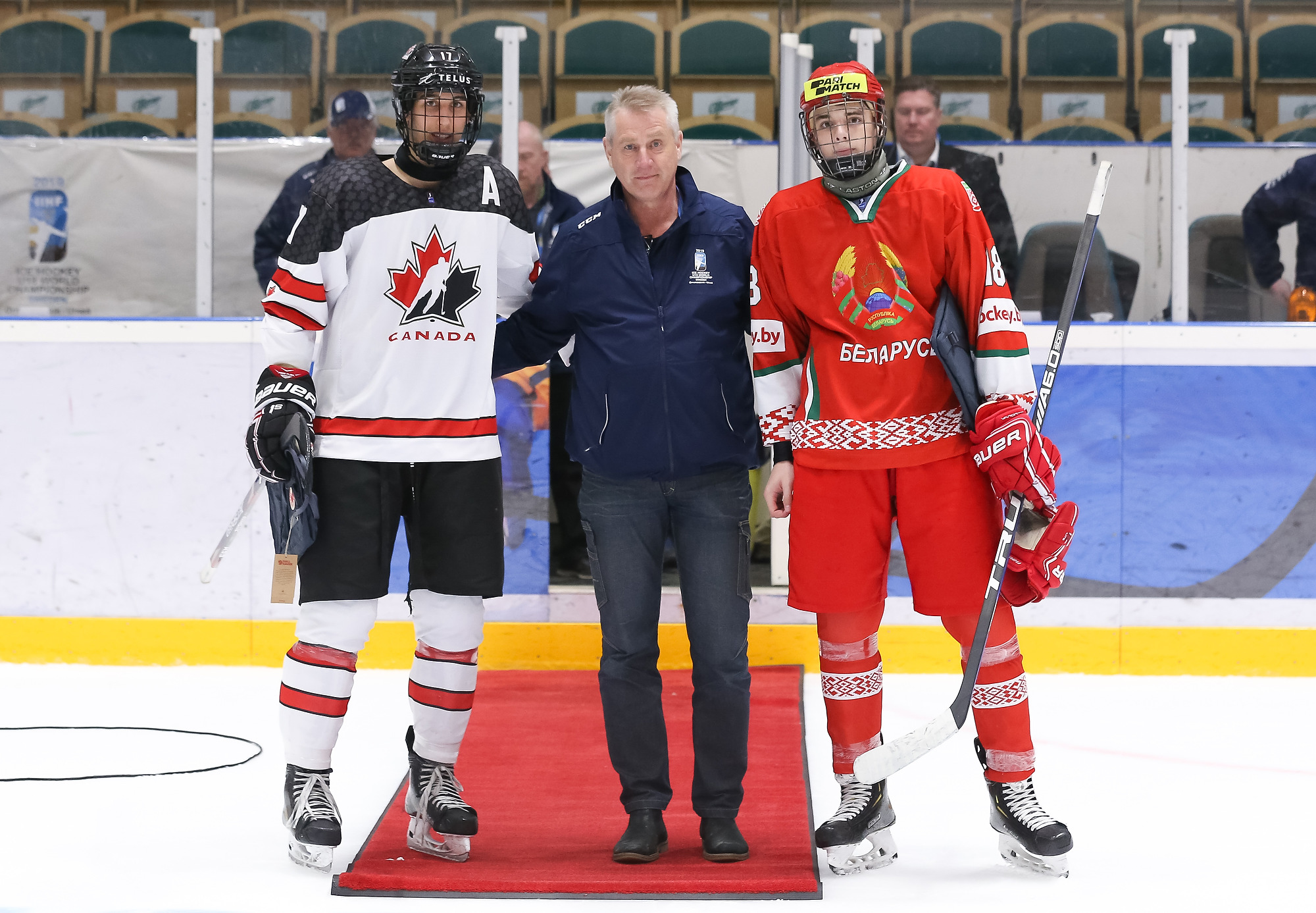 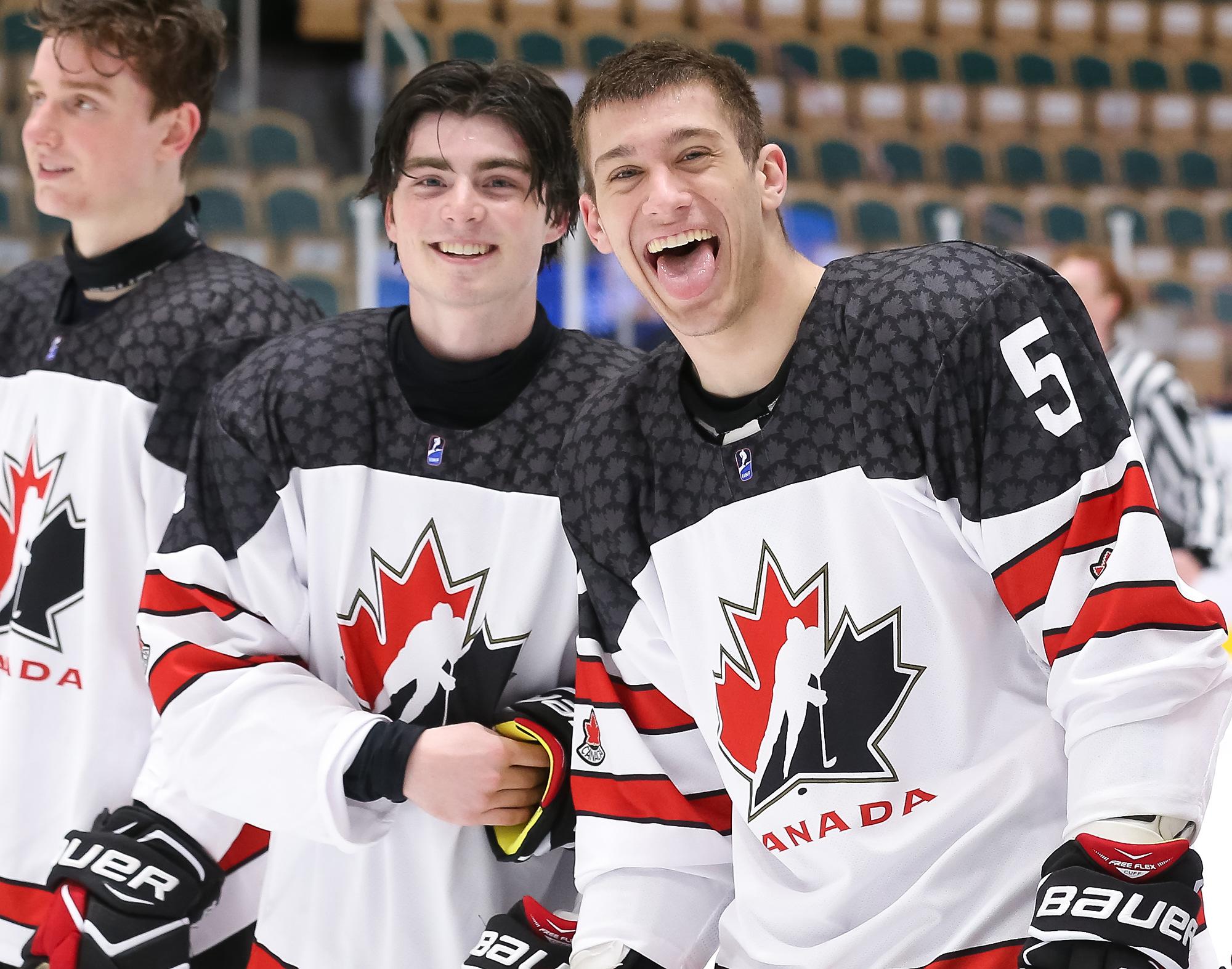 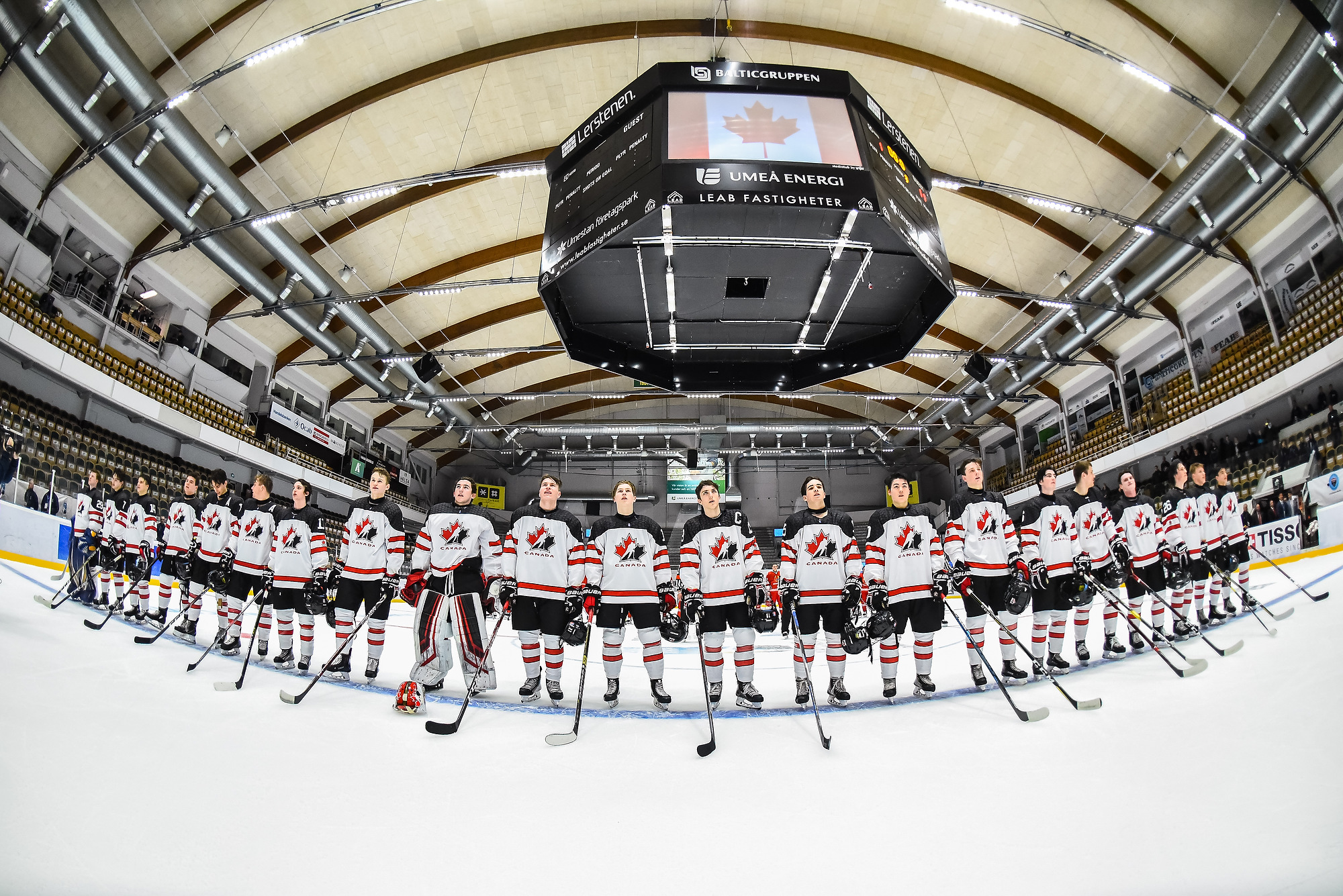 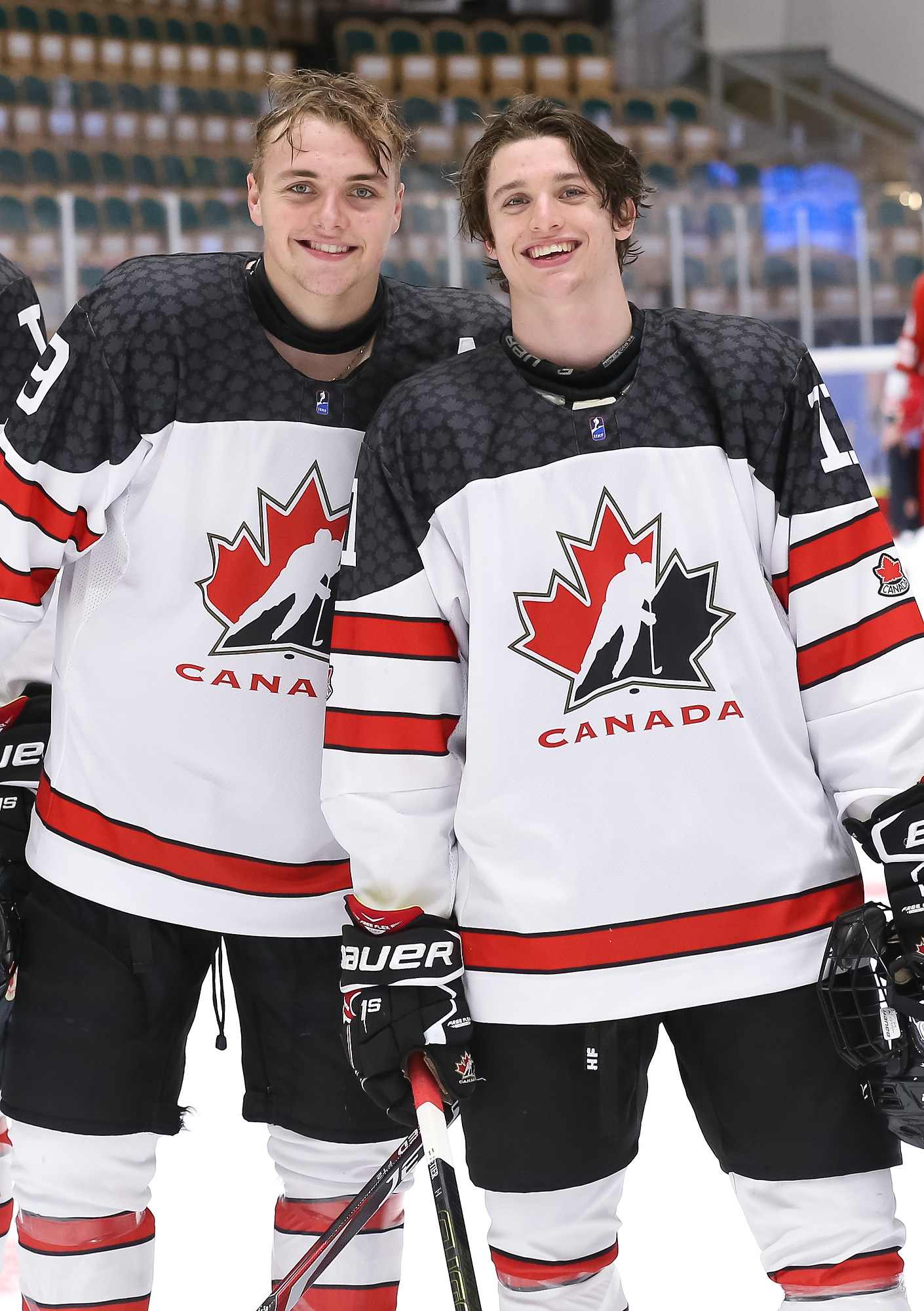 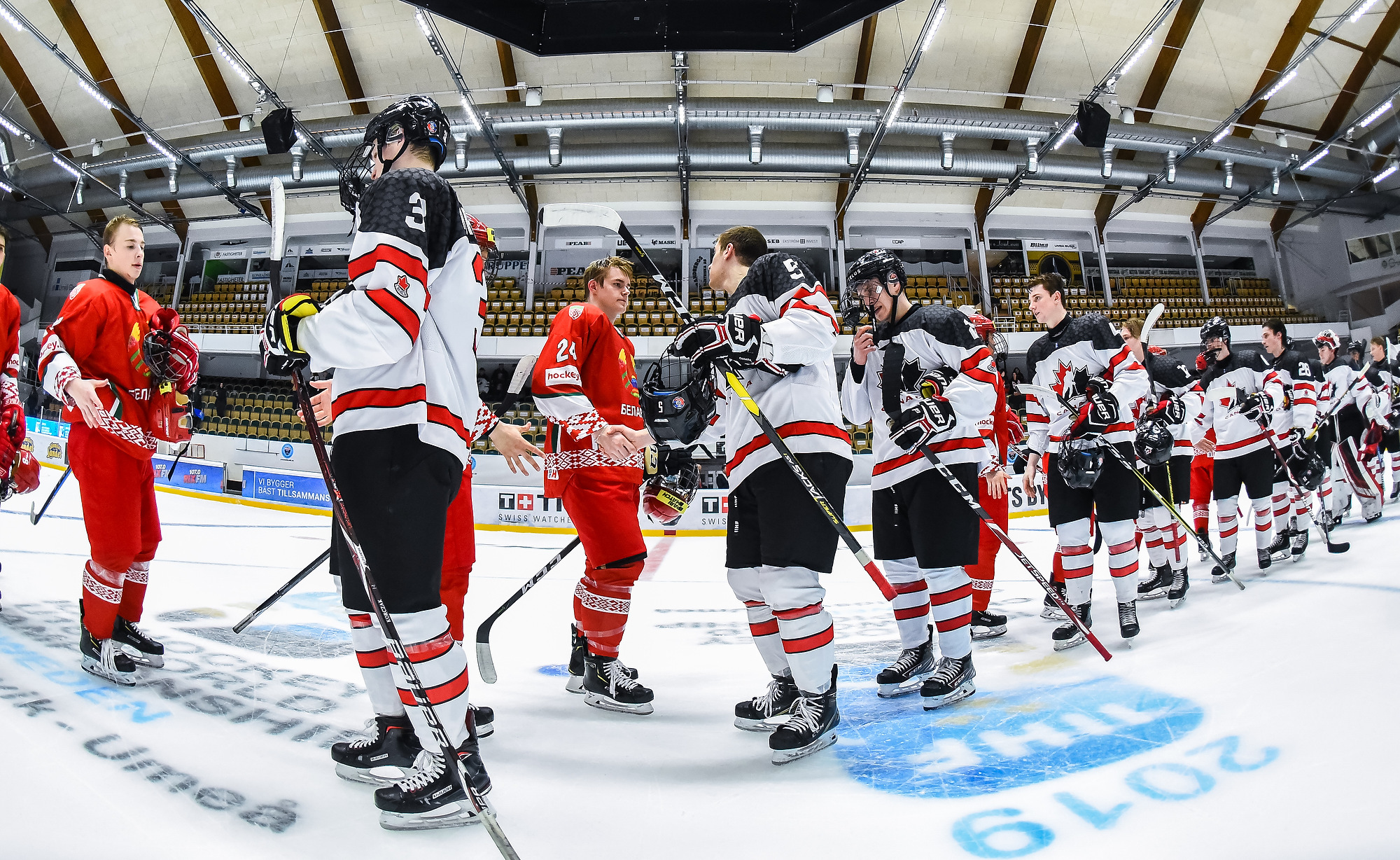 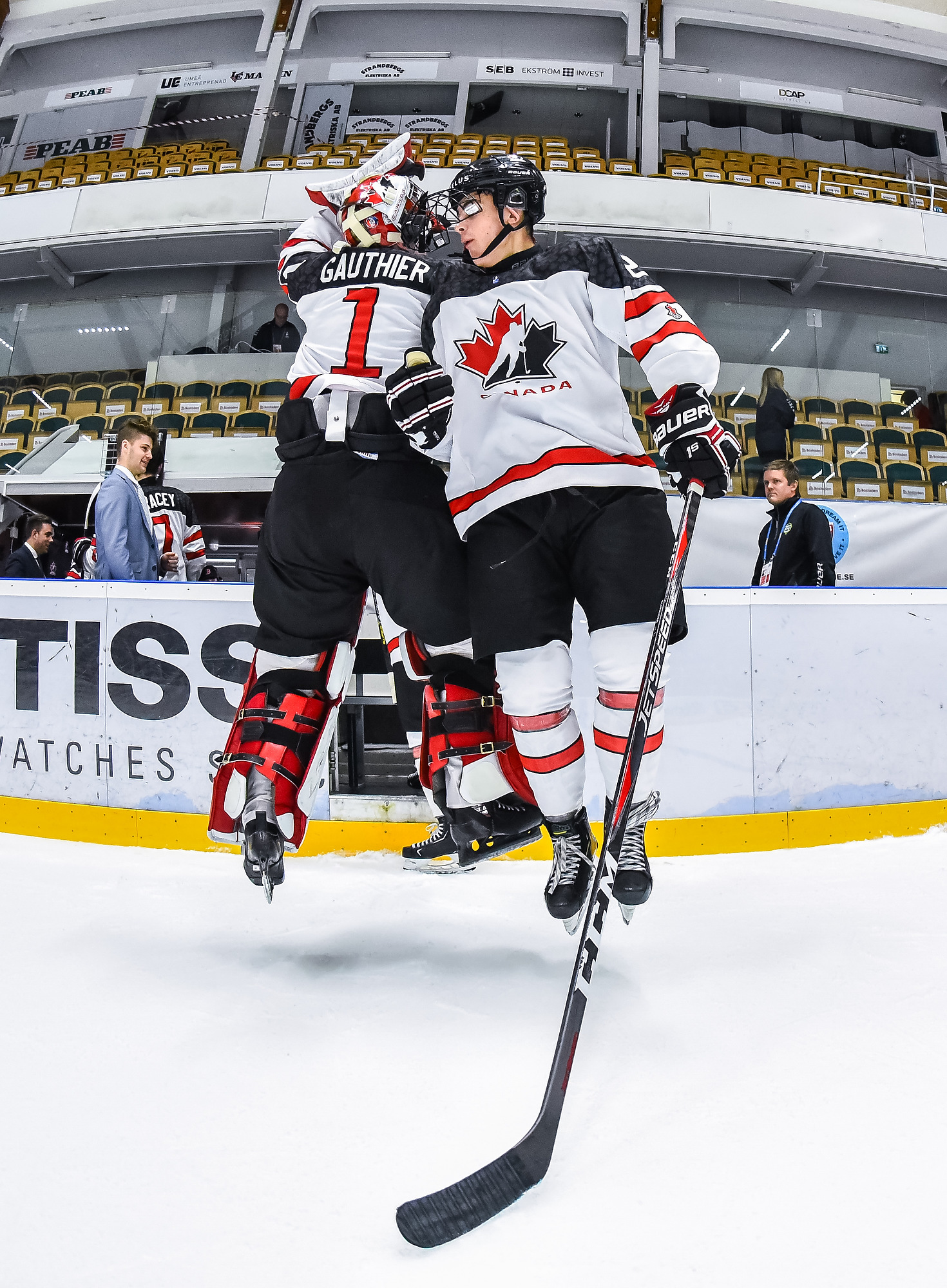