Captain Comtois scores 4 of 14
Morgan Frost's (#26) hat trick led Canada to a one-sided victory over Denmark at Rogers Arena tonight.
photo: Matt Zambonin / HHOF-IIHF Images
share
Maxime Comtois scored four goals and Morgan Frost had a hat trick and two assists as defending champions Canada steamrolled Denmark in the opening game for both teams at the 2019 World Juniors. It was a convincing win from start to finish as the Danes couldn’t match Canada’s speed, puck pursuit, and intensity.

"It's the first game of the tournament, so everything is ramped up," Frost suggested. "Everyone was just so excited to get the tournament going. We were focused and played really well. It was an unbelievable game and something I'll never forget."

The result couldn’t have been surprising given that Canada has a perfect 5-0-0 record against Denmark in U20 play, outscoring them 36-4. Those numbers are now 6-0-0 and 50-4.

Every player on Canada except Alexis Lafreniere and Noah Dobson had at least one point. Cody Glass had four assists, while Brett Leason had two goals and two assists.

Michael DiPietro made 14 mostly easy stops for the shutout.

It doesn’t get easier for Denmark. The Danes have less than 24 hours to prepare for Russia tomorrow afternoon. Canada takes on Switzerland later in the day.

"Our goal was to rebound after our last game [a 5-2 exhibition loss to Finland], and I think we came out and right from the puck drop we were ready to go," said Owen Tippett, who had two goals.

As for the onslaught, he was unapologetic.
You want to build good habits and if you let your foot off the gas, that can turn into a habit. We just stuck with our game plan and showcased our skills.
Owen Tippett
Canadian forward
Frost got things going early before a raucous home crowd. Brett Leason created a turnover inside the Danish blue line, and Frost ended up with the puck in front of goalie Mads Soegaard. A quick shuffle from the Canadian forward, though, and the puck was in the net at 4:52.

The World Juniors is only one day and four games old, but goal of the tournament might well be Canada’s second, less than four minutes later. On this, a beautiful three-way passing play from side to side had Owen Tippett smack the puck into the open back side after great passes by Cody Glass to Frost and on to Tippett.

Frost scored his second with only 42.3 seconds left in the opening period, his shot squeezing under the blocker arm of Soegaard.
World Men U20
Canada vs. Denmark - 2019 IIHF World Junior Championship
Maxime Comtrois scored four goals and Morgan Frost had a hat trick and two assists as defending champions Canada steamrolled Denmark 14-0.
CAN DEN 27 DEC 2018
Canada added five unanswered goals in the second. Soegaard deserved the Purple Heart fro his valiant effort, but Canada’s every shot seemed to be of quality. Captain Maxime Comtois made it 4-0 in the first minute, snapping his own rebound home, and then Frost got his hat-trick goal on a torpedo play started by Canadian goalie Michael DiPietro.

He fired a pass from his crease to Nick Suzuki at the Denmark blue line and went in on goal, faking a shot before dishing off to Frost, who had an open net. Jack Srudnicka and Jaret Anderson-Dolan added goals later in the period to add insult to injury.

Canada added another goal early in the third, by Comtois, but the Danes had their best chance of the night at 1:42 when Phillip Schultz was awarded a penalty shot. An unwise back pass by Tippett inside the Denmark blue line forced defenceman Evan Bouchard to foul Schultz on a breakaway. Schultz, however, made a deke and shot that didn't fool DiPietro at all, and the goalie made the save.

It wasn't much later that Comtois scored his second, third and fourt of the night to join Frost atop the scoring table.
Canada vs. Denmark (2019 IIHF WJC) 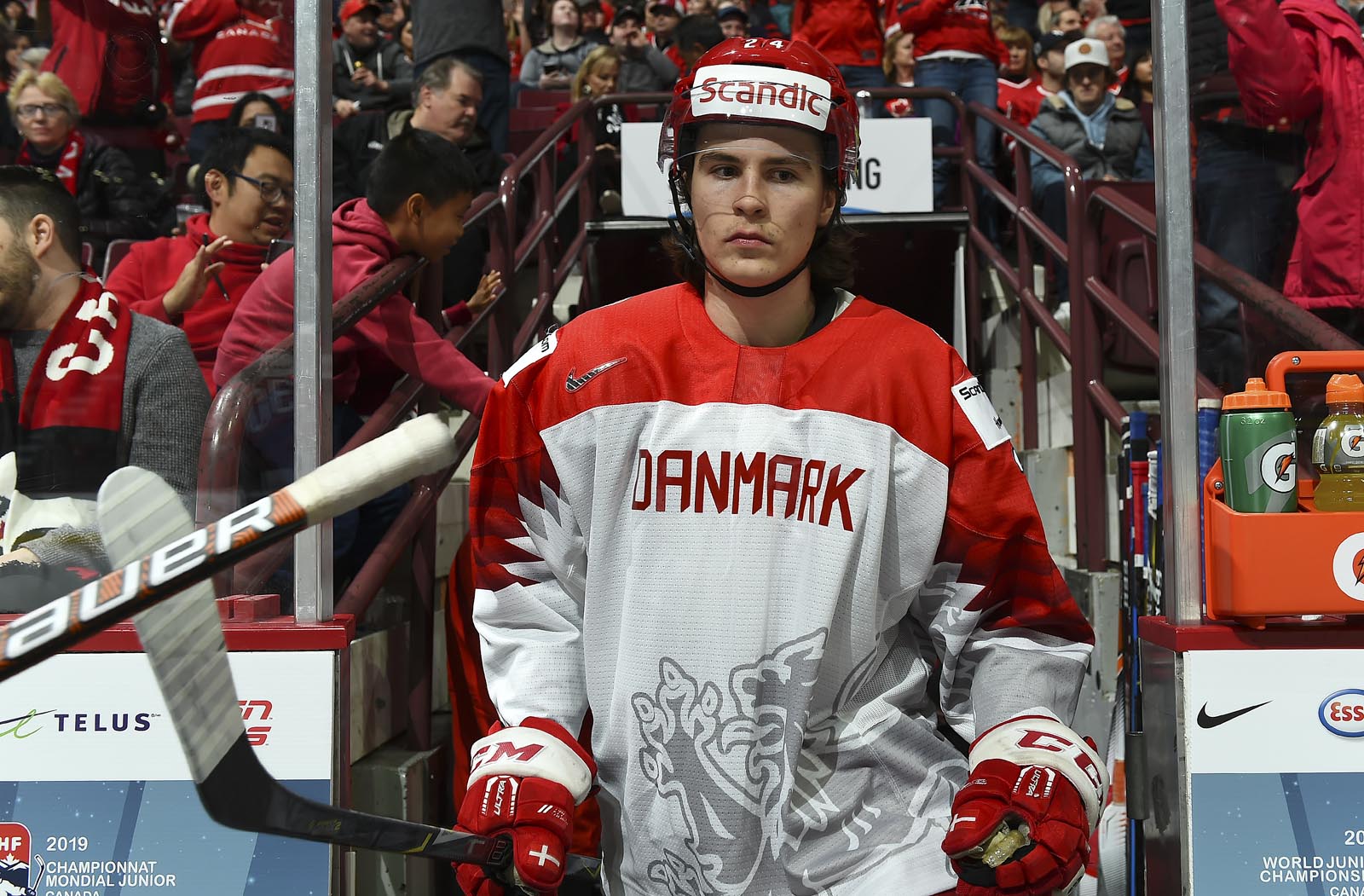 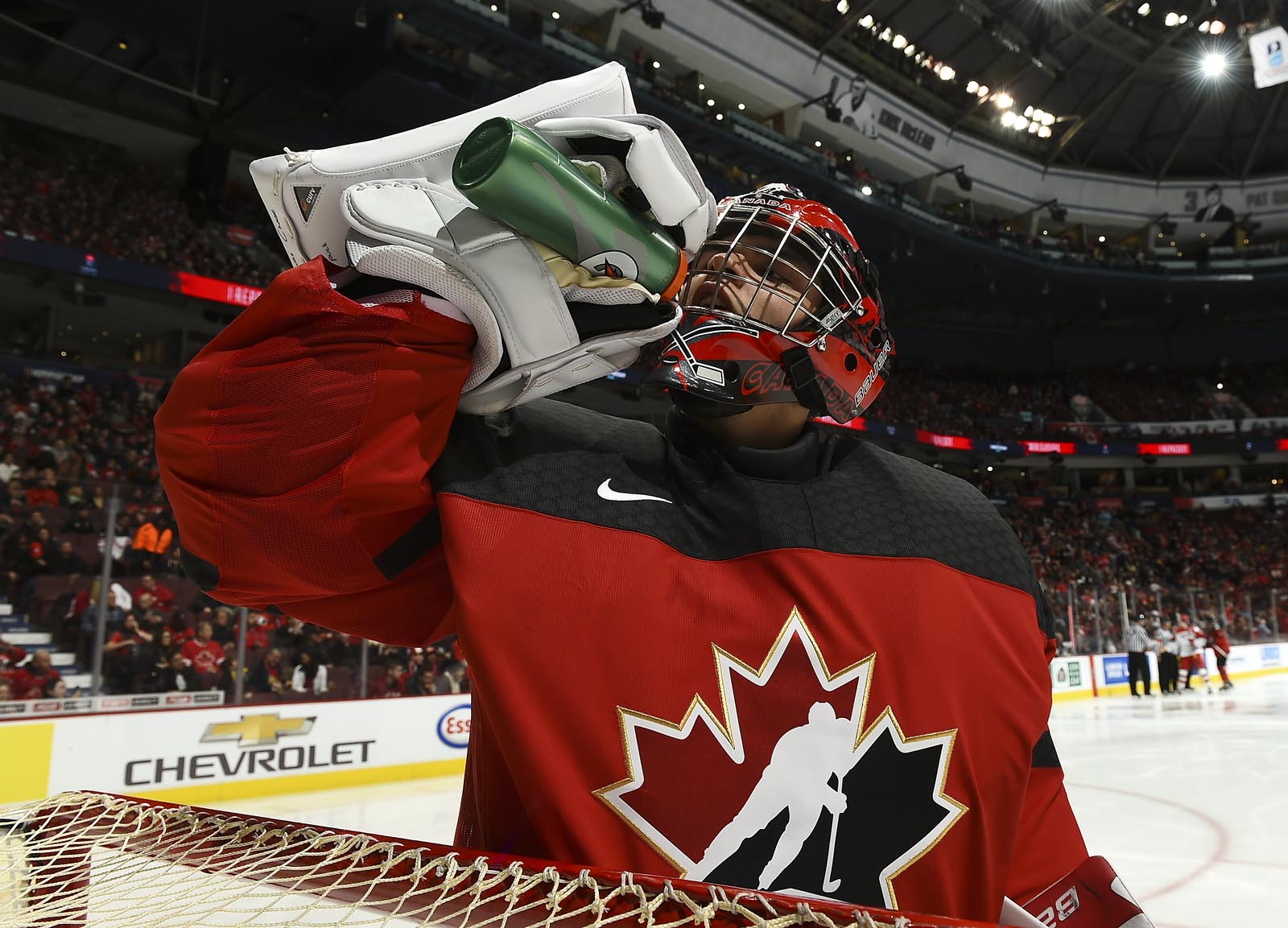 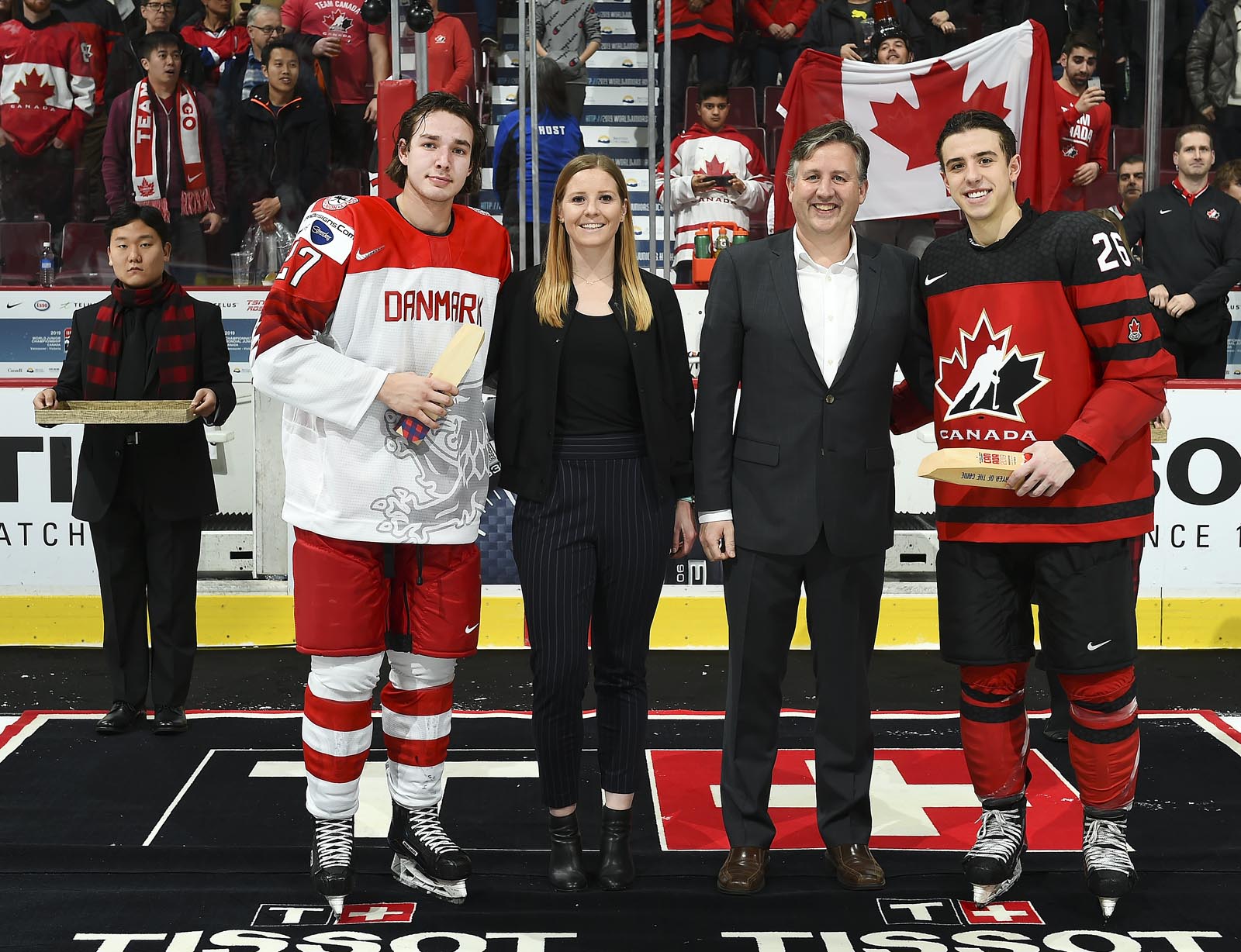 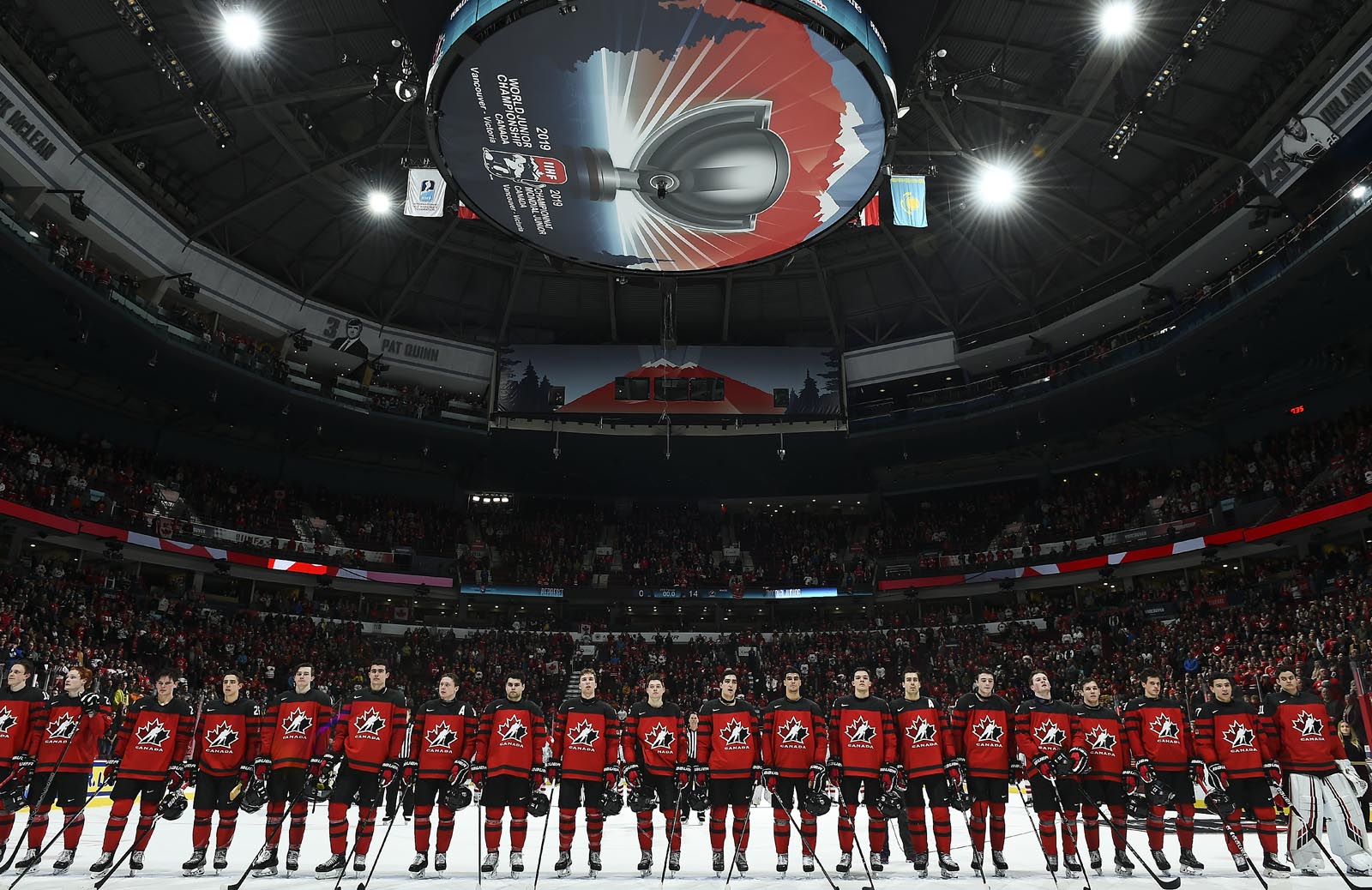 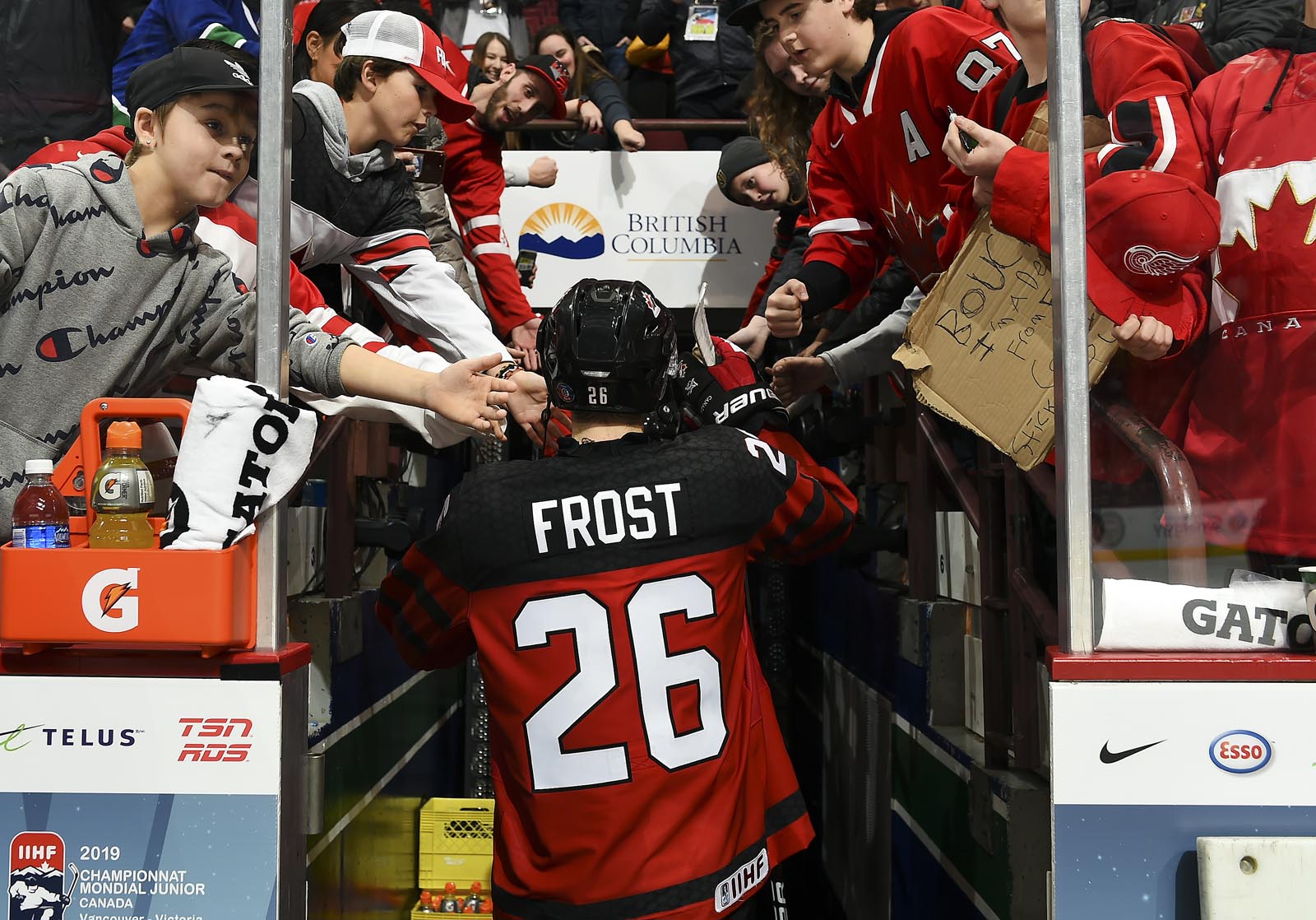 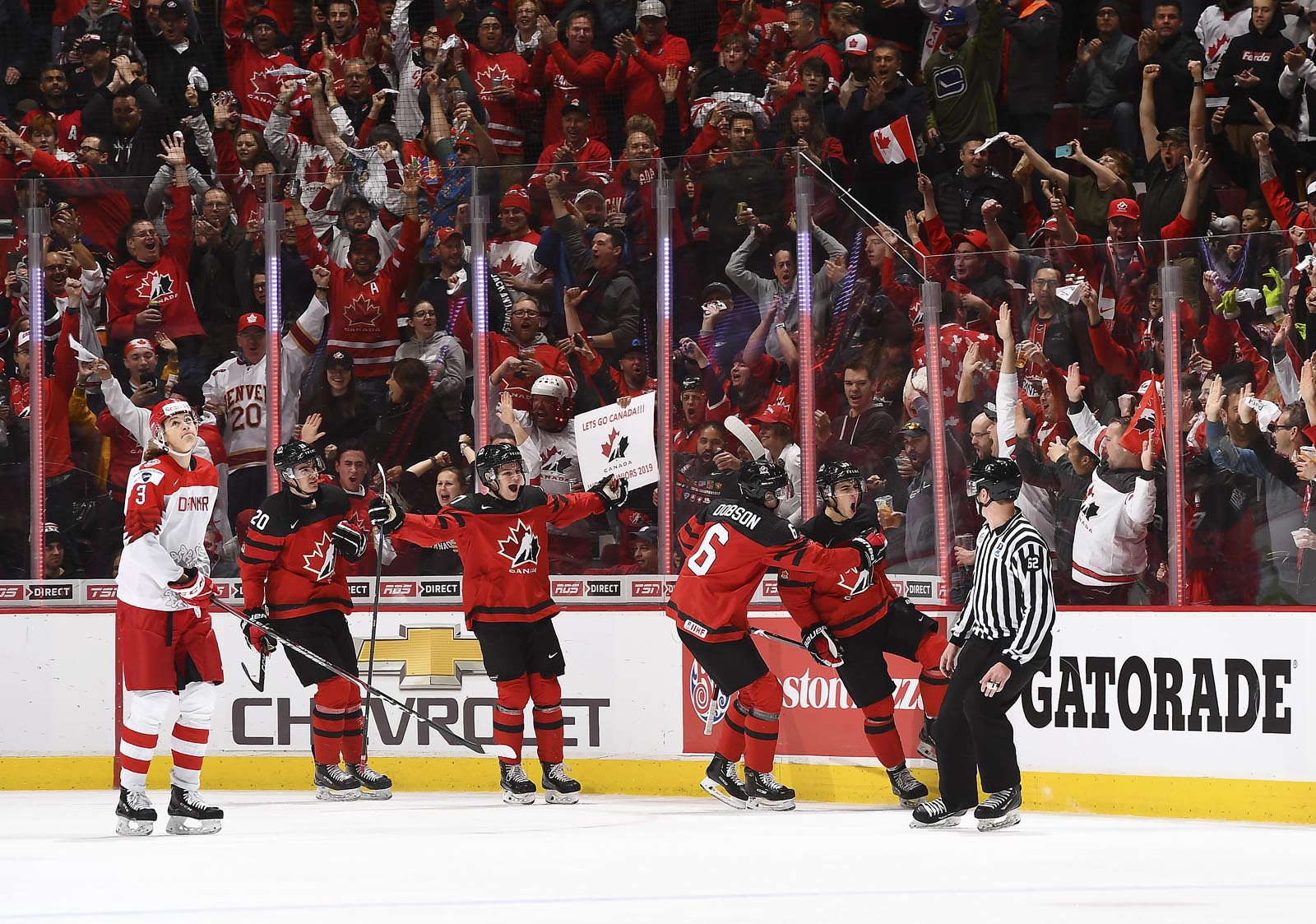 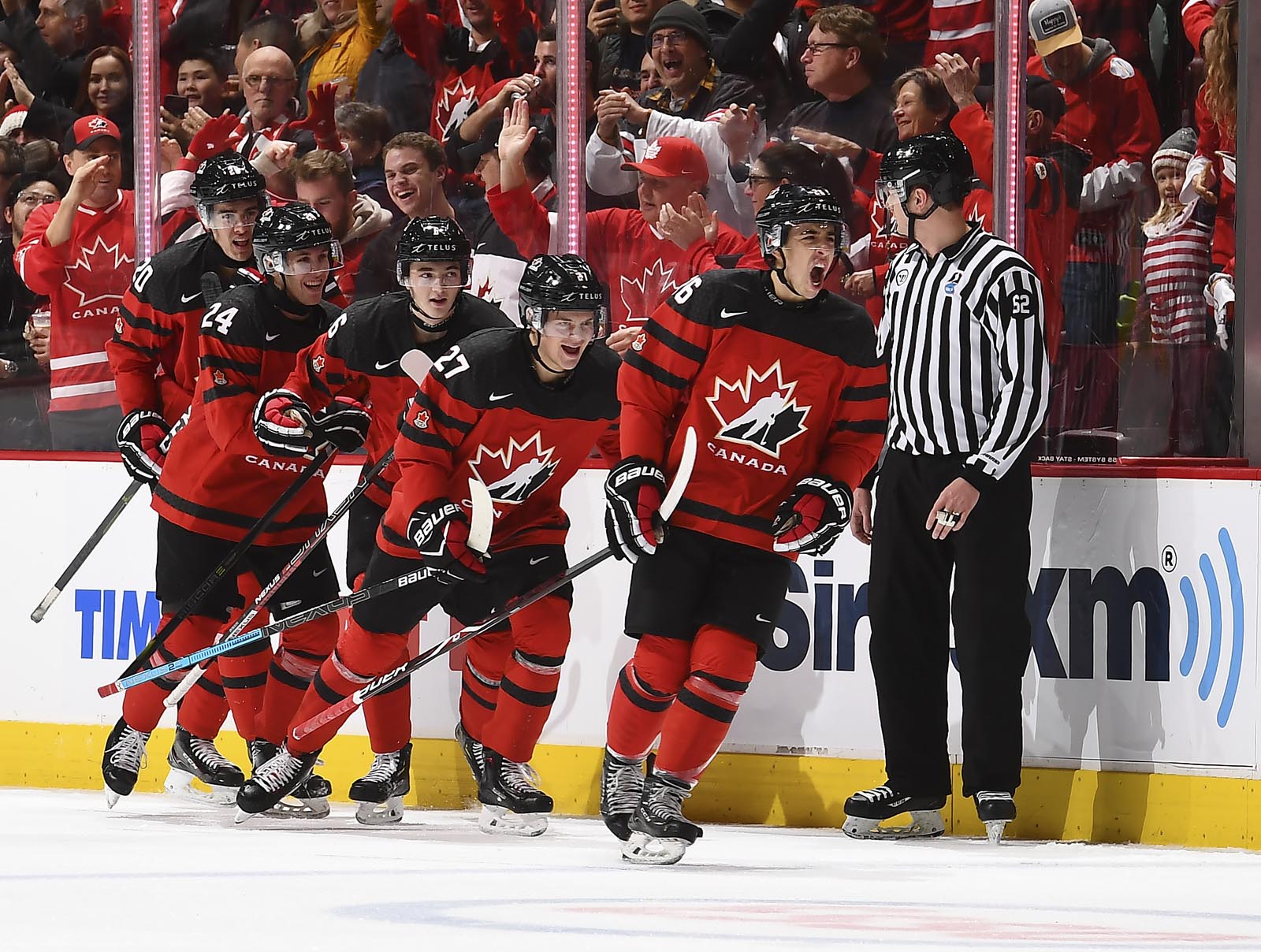 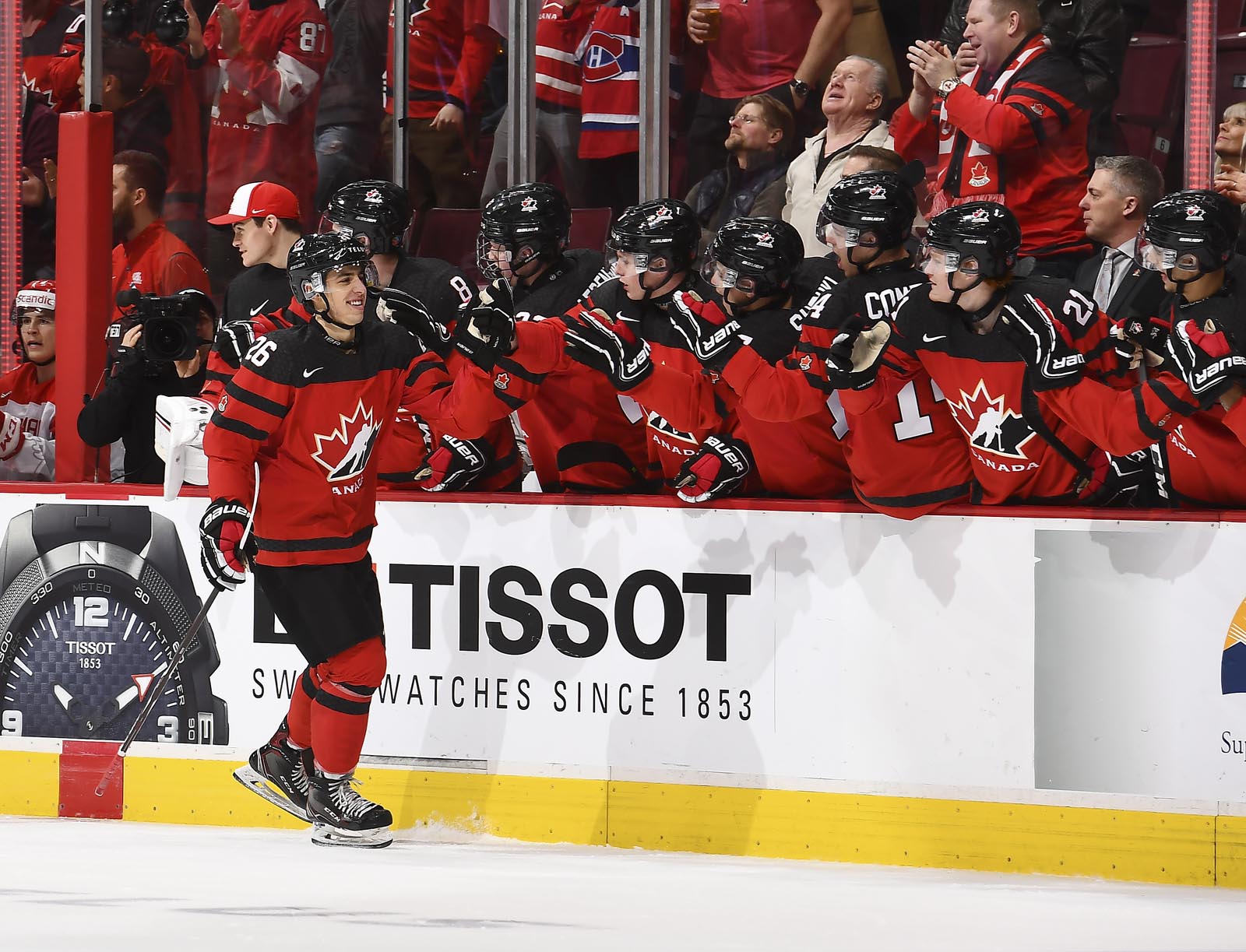 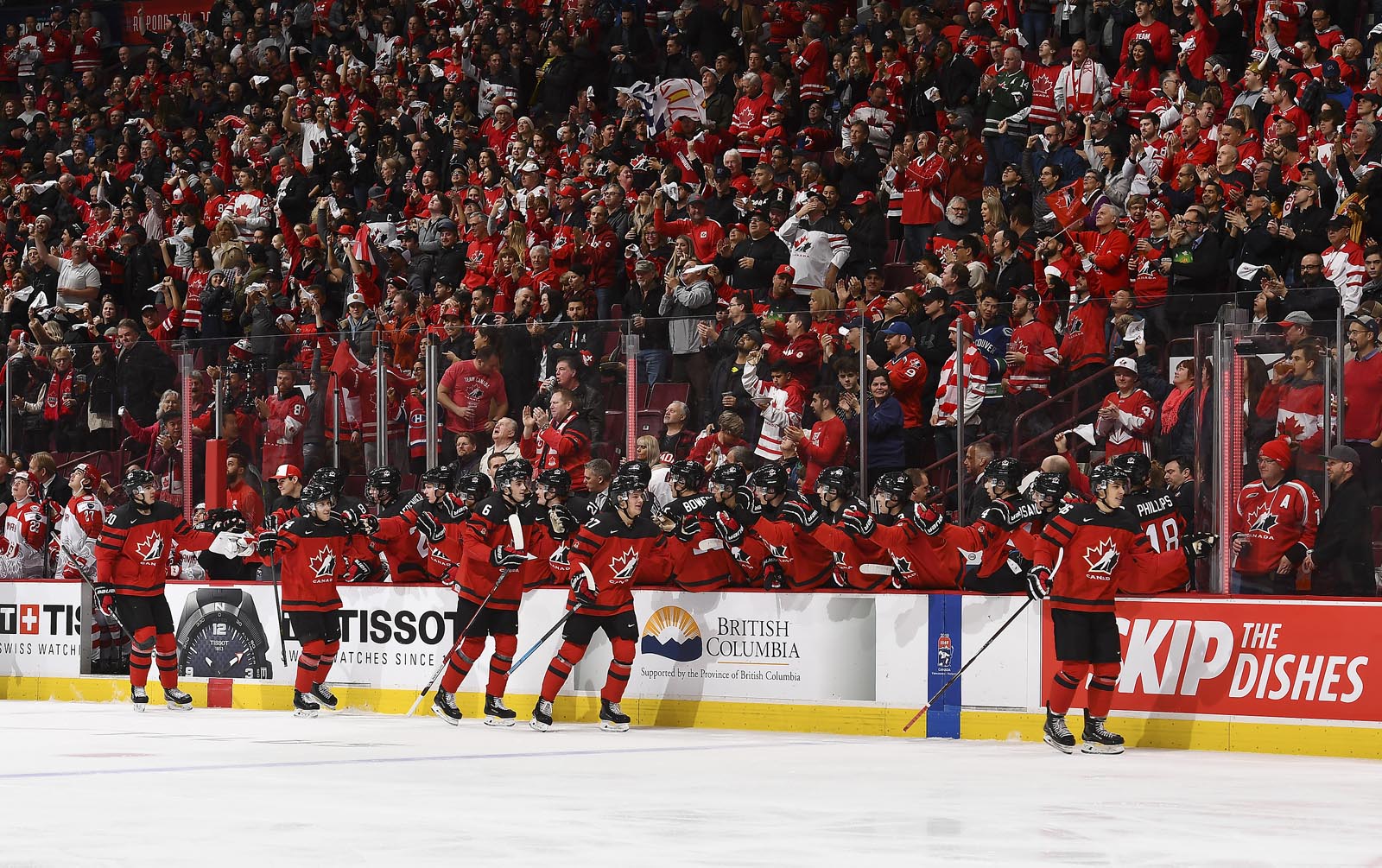 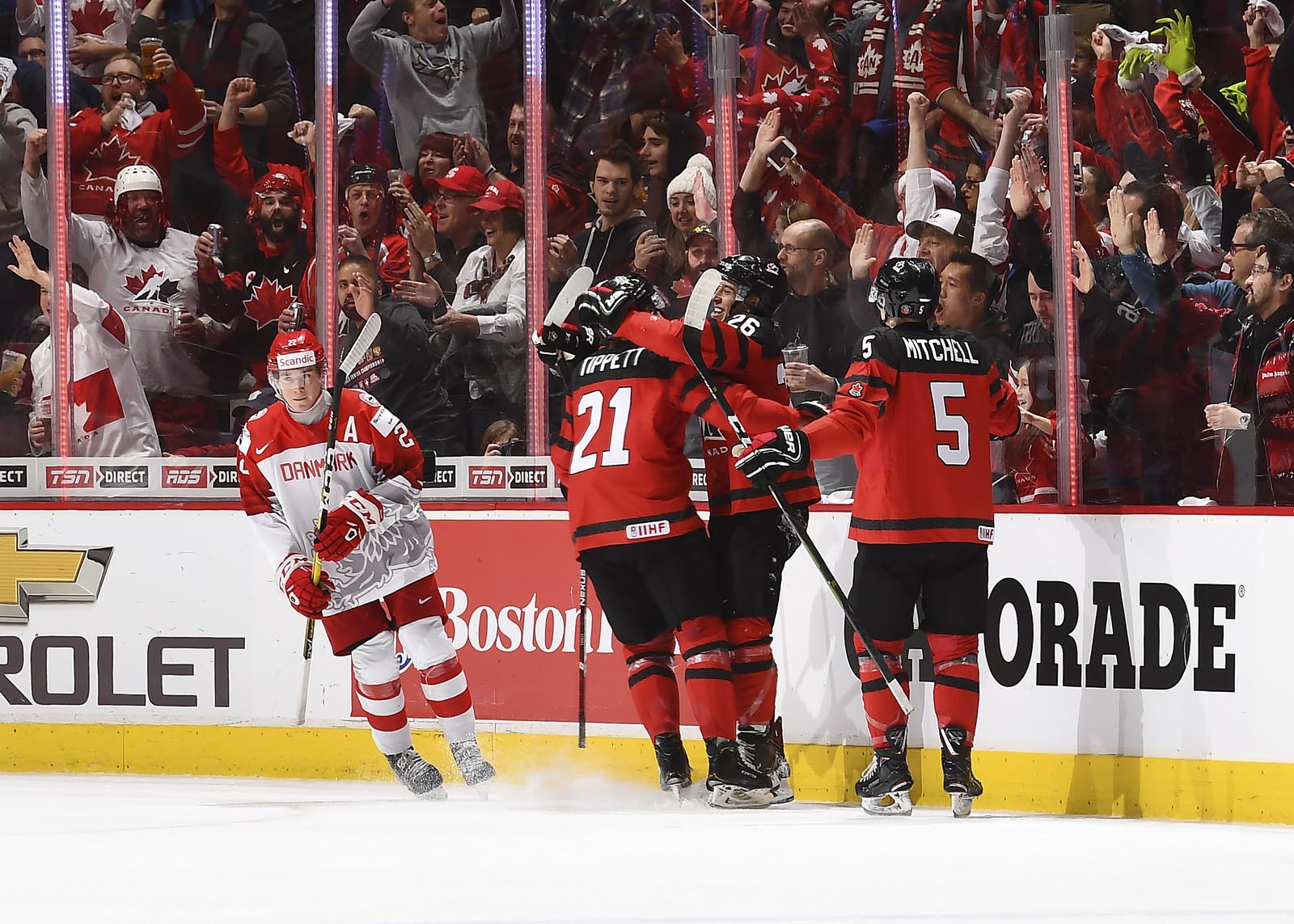 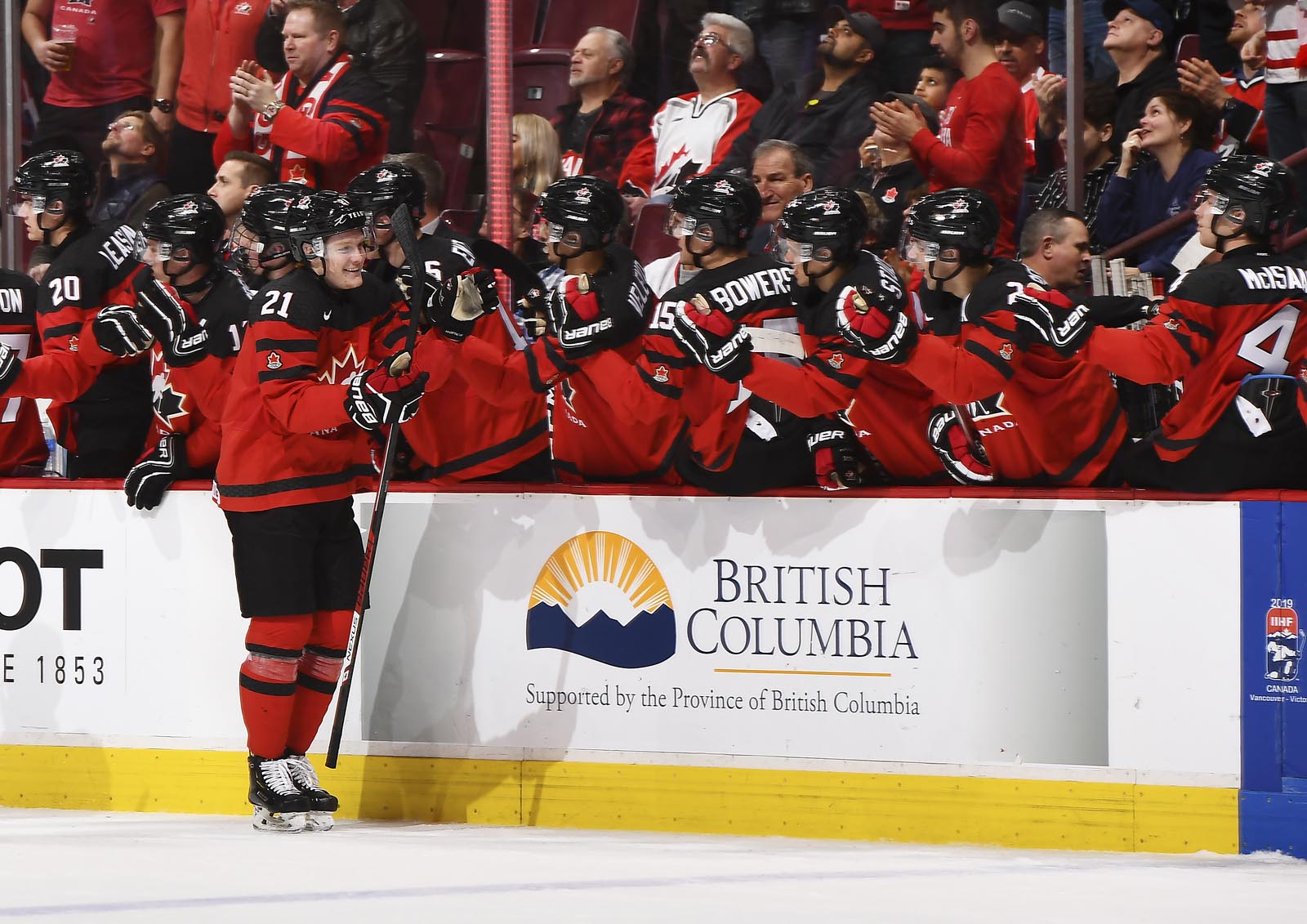 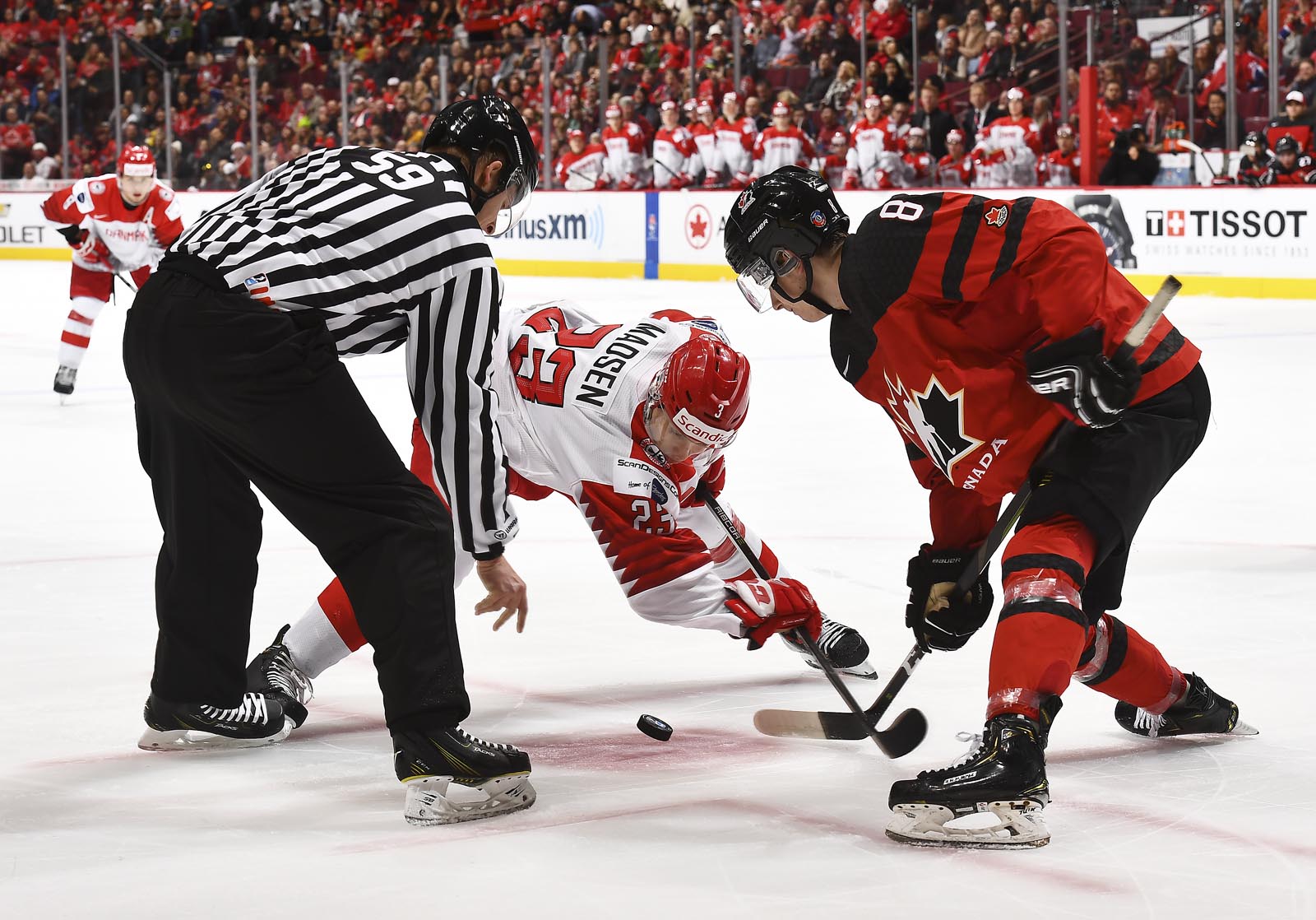 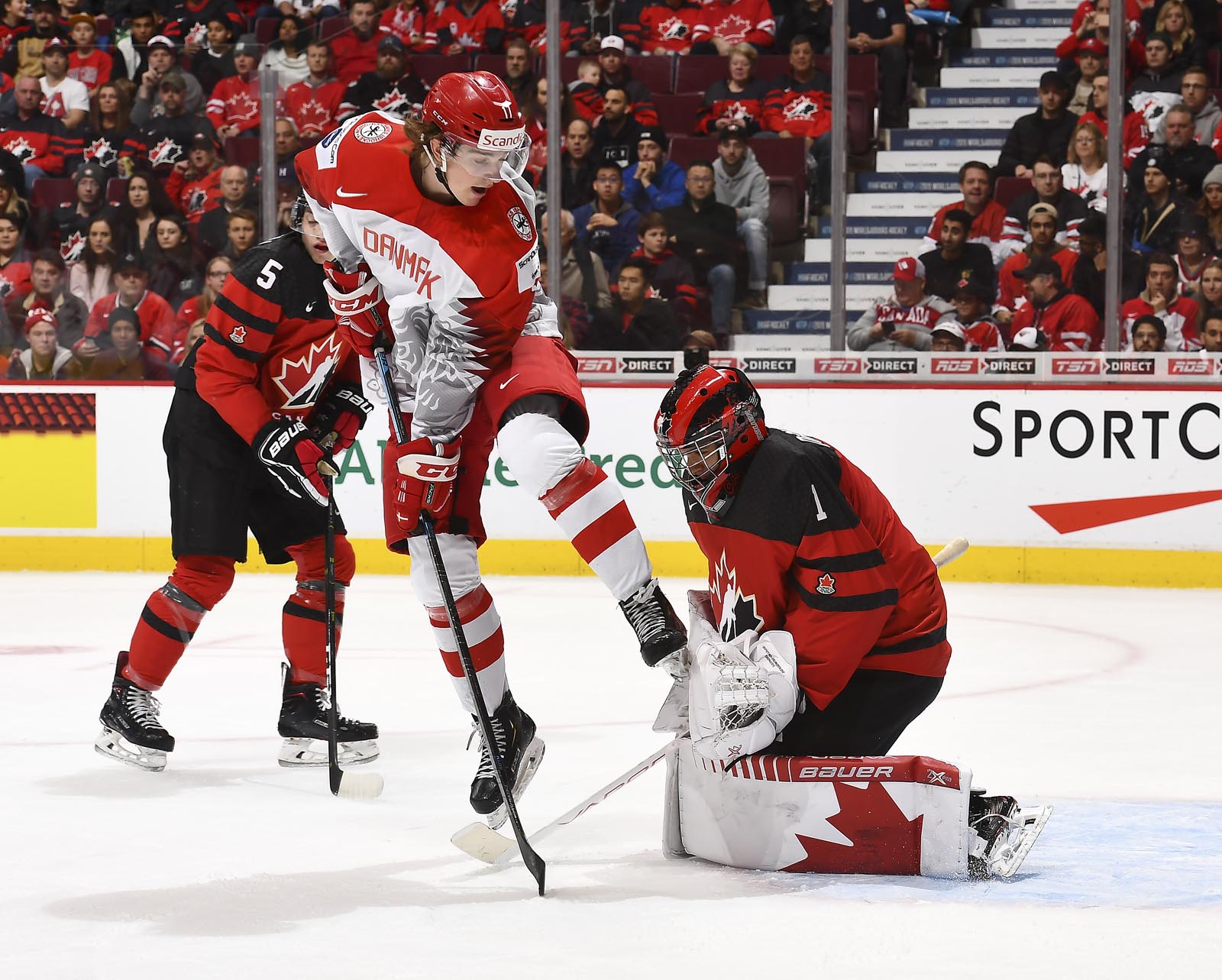 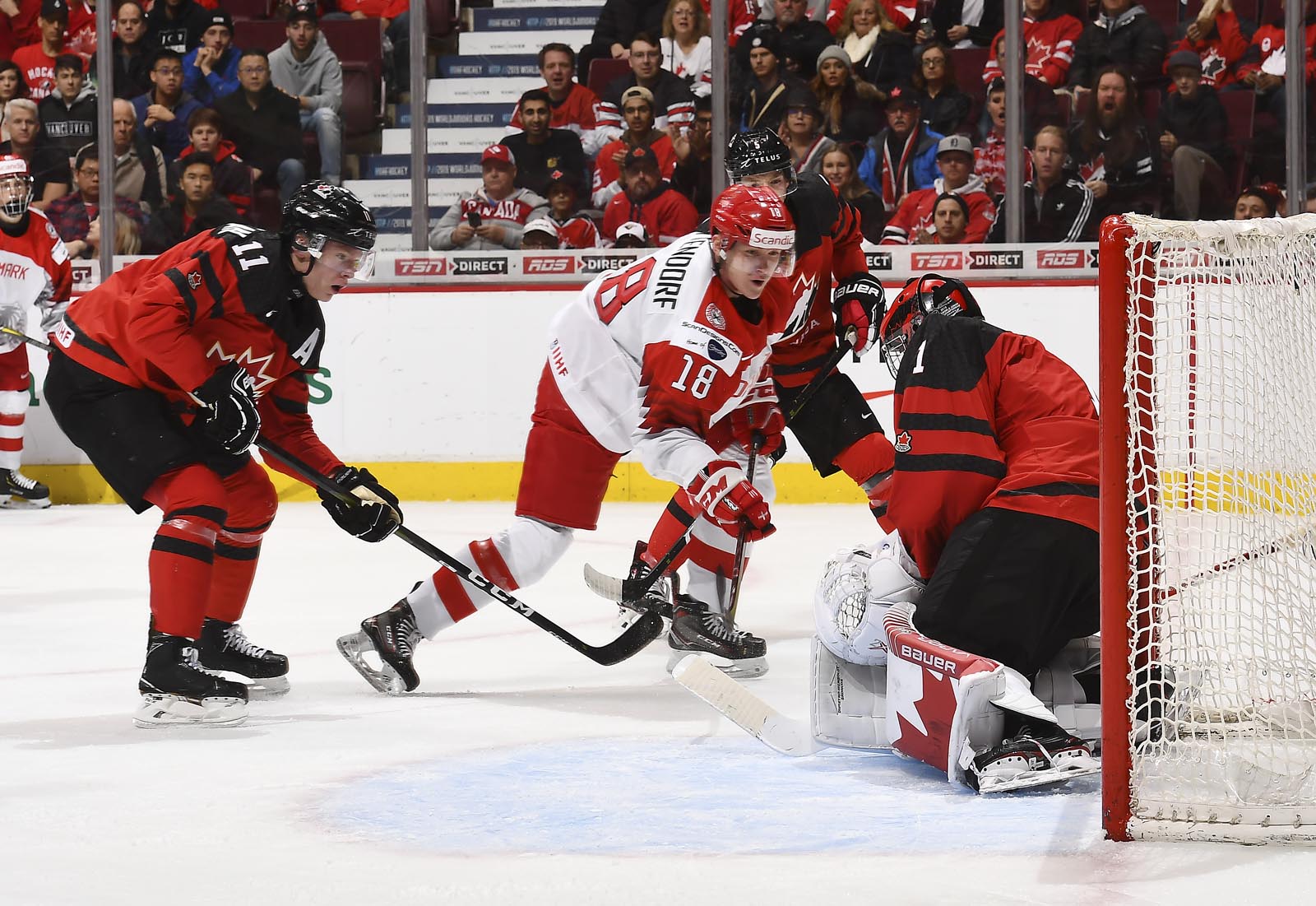 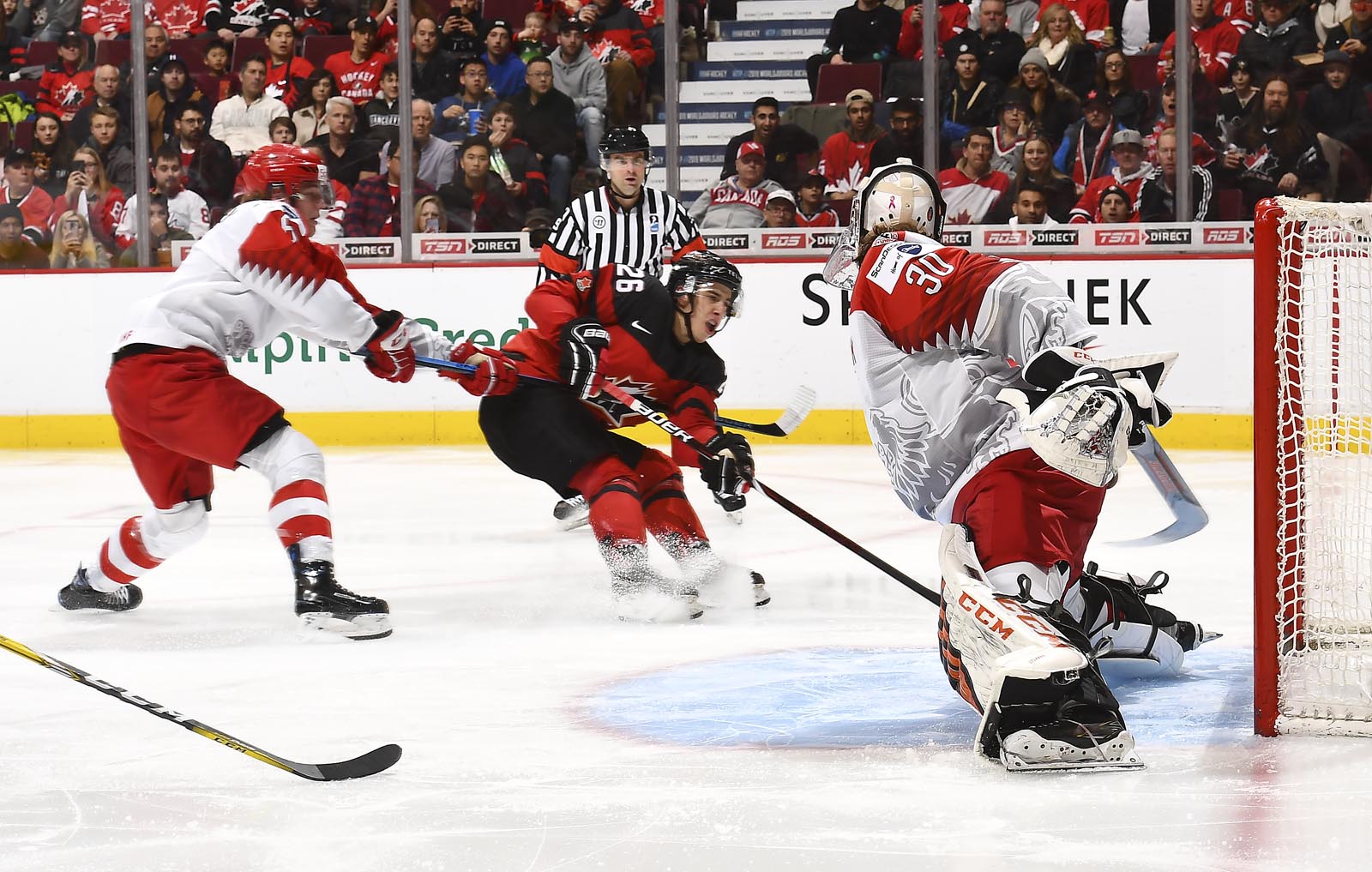 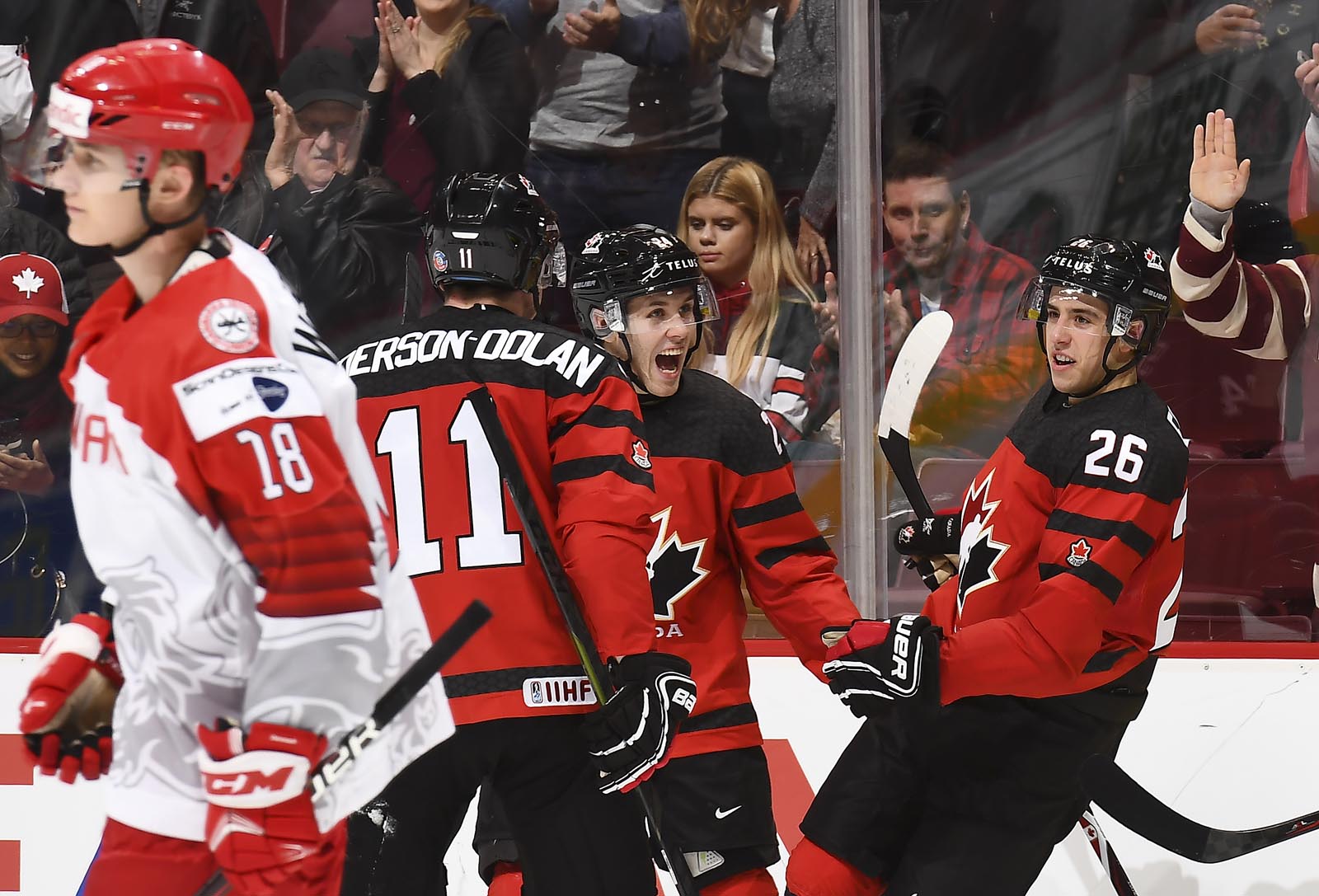 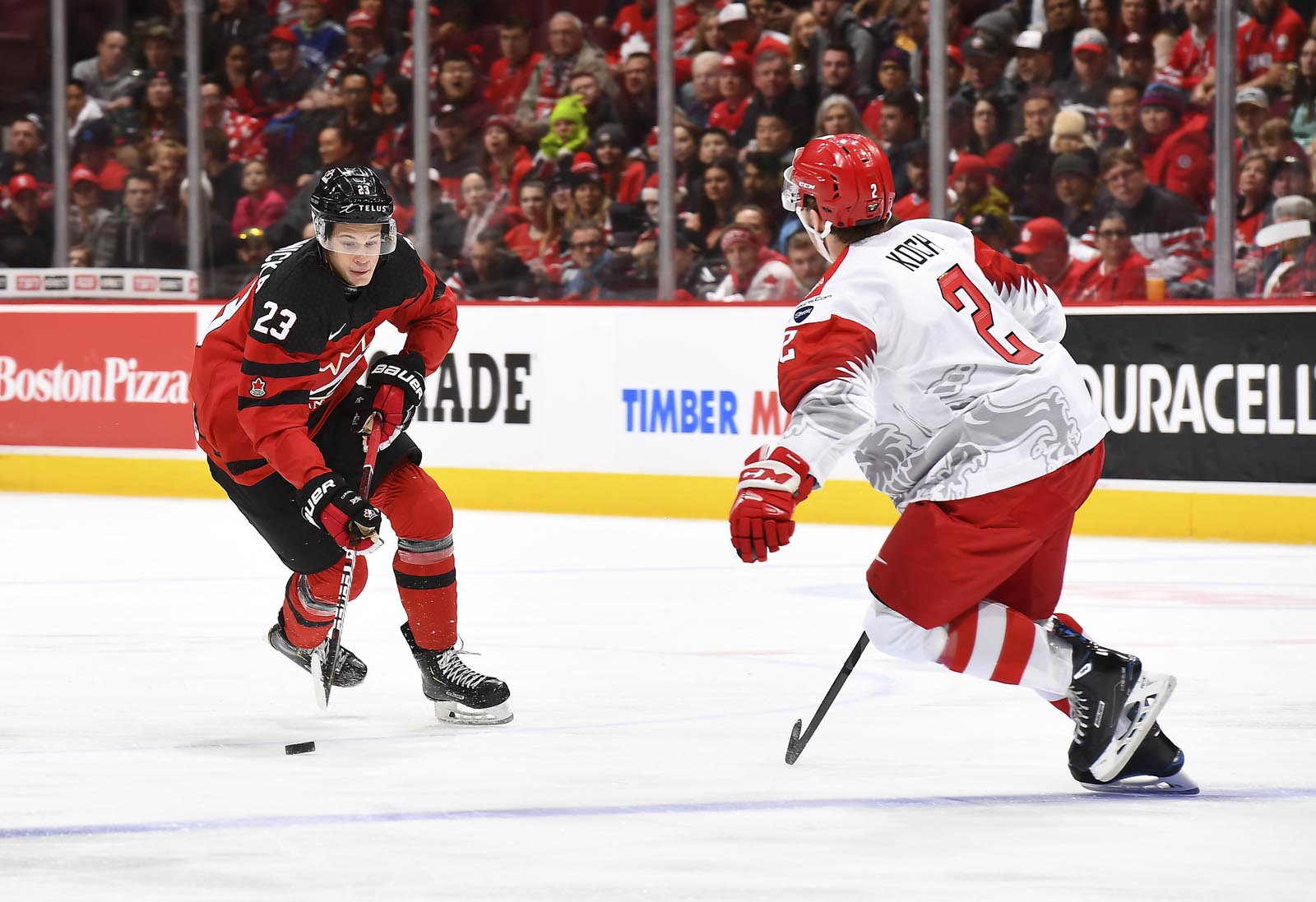 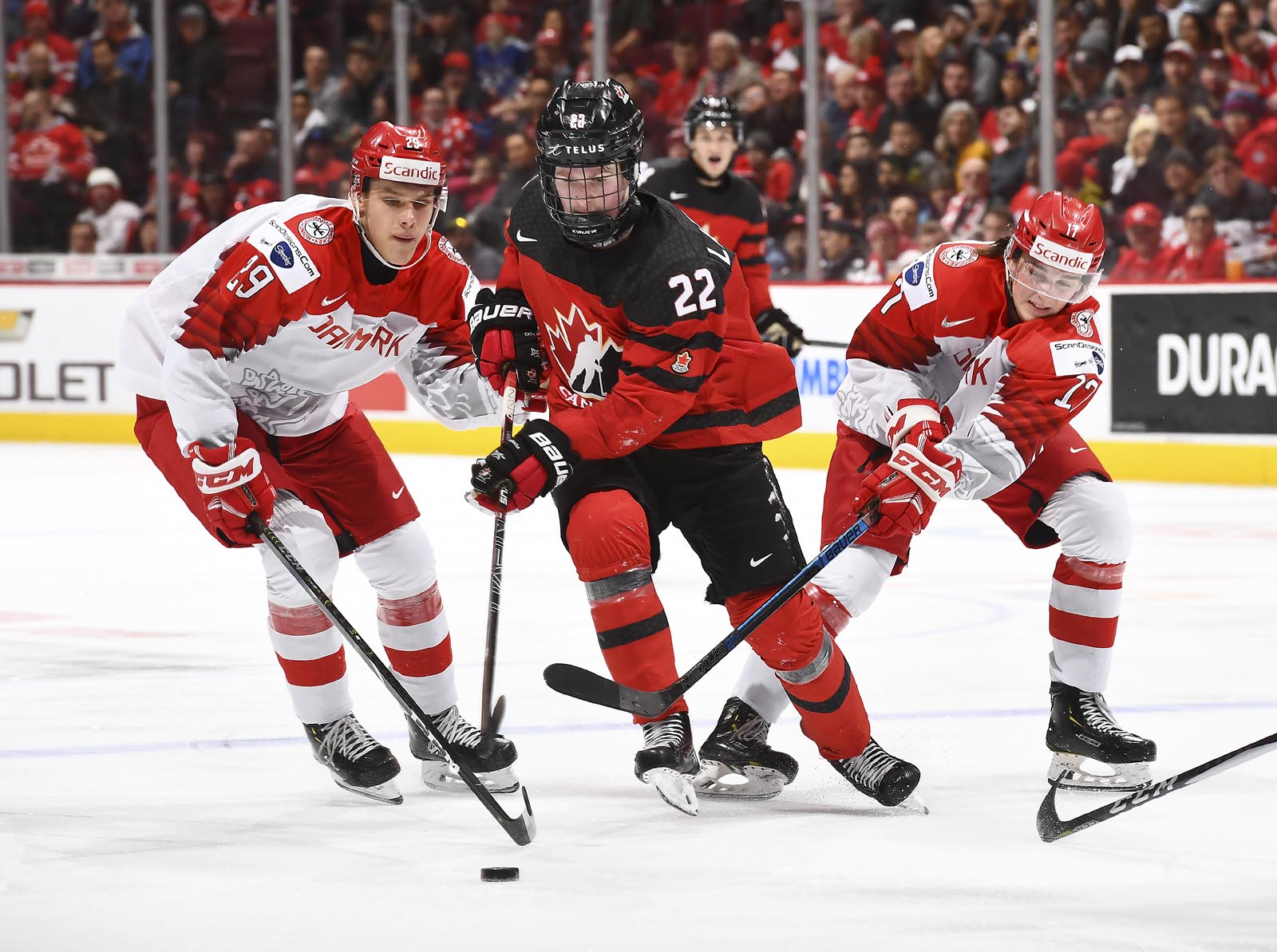 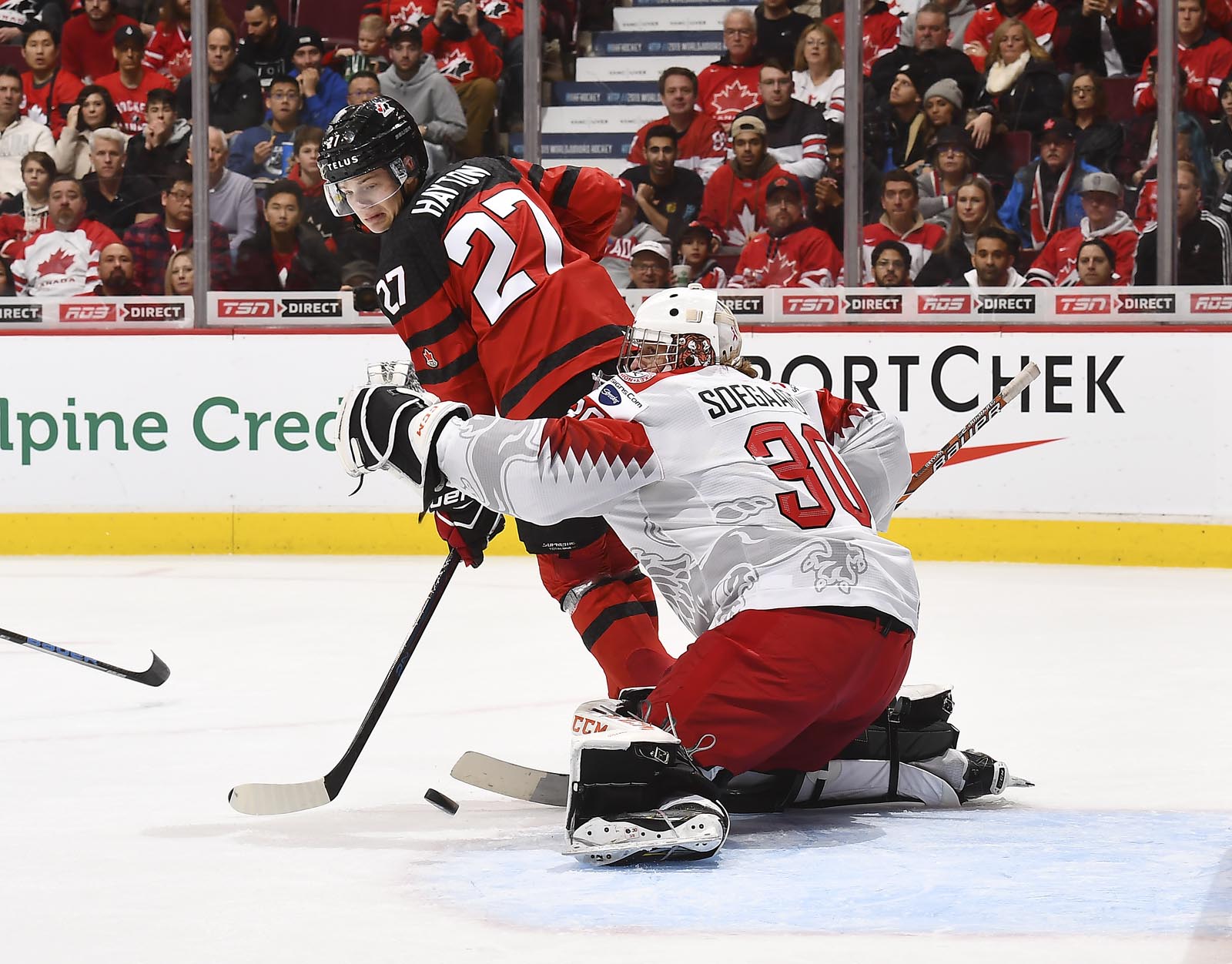 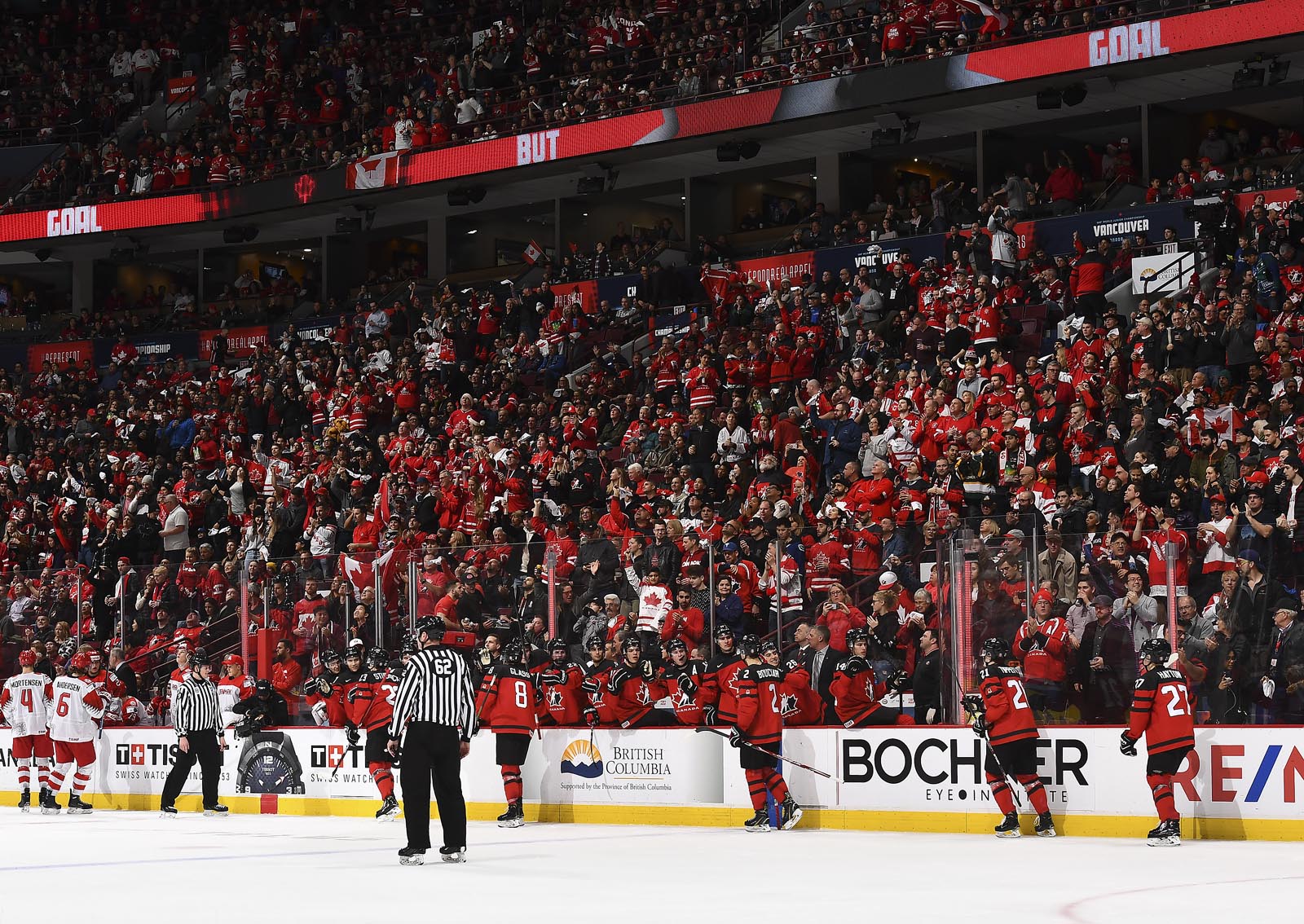 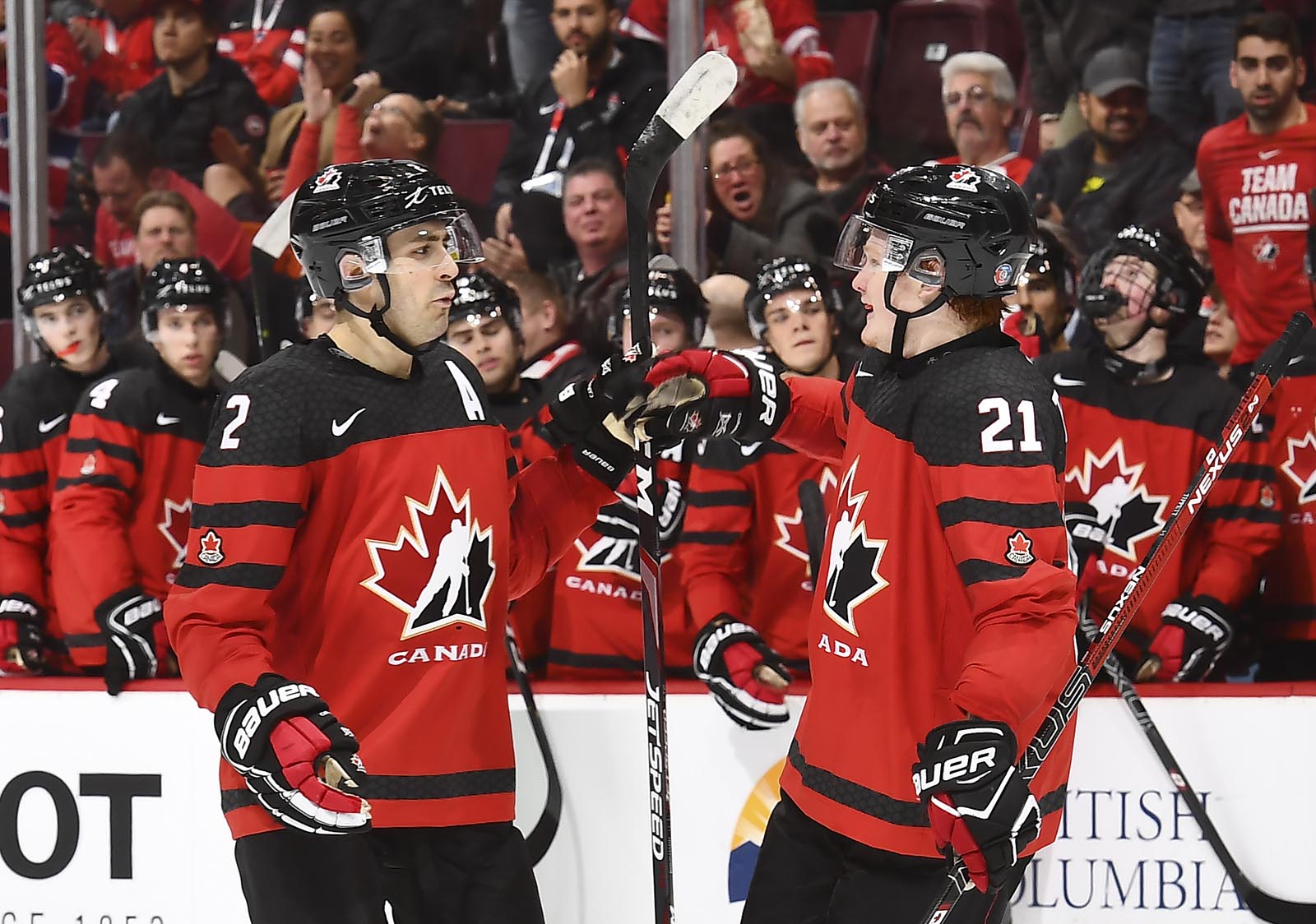 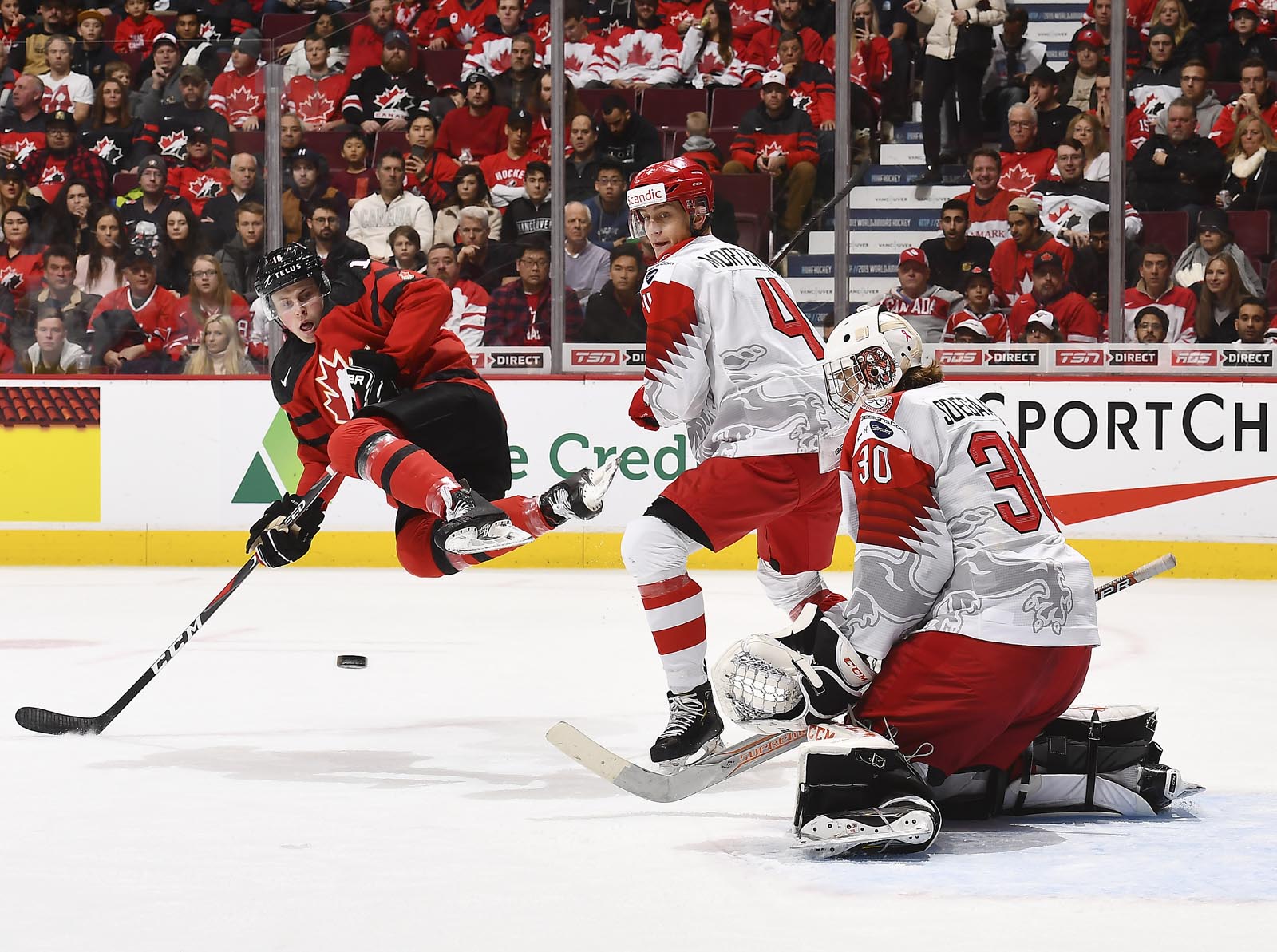 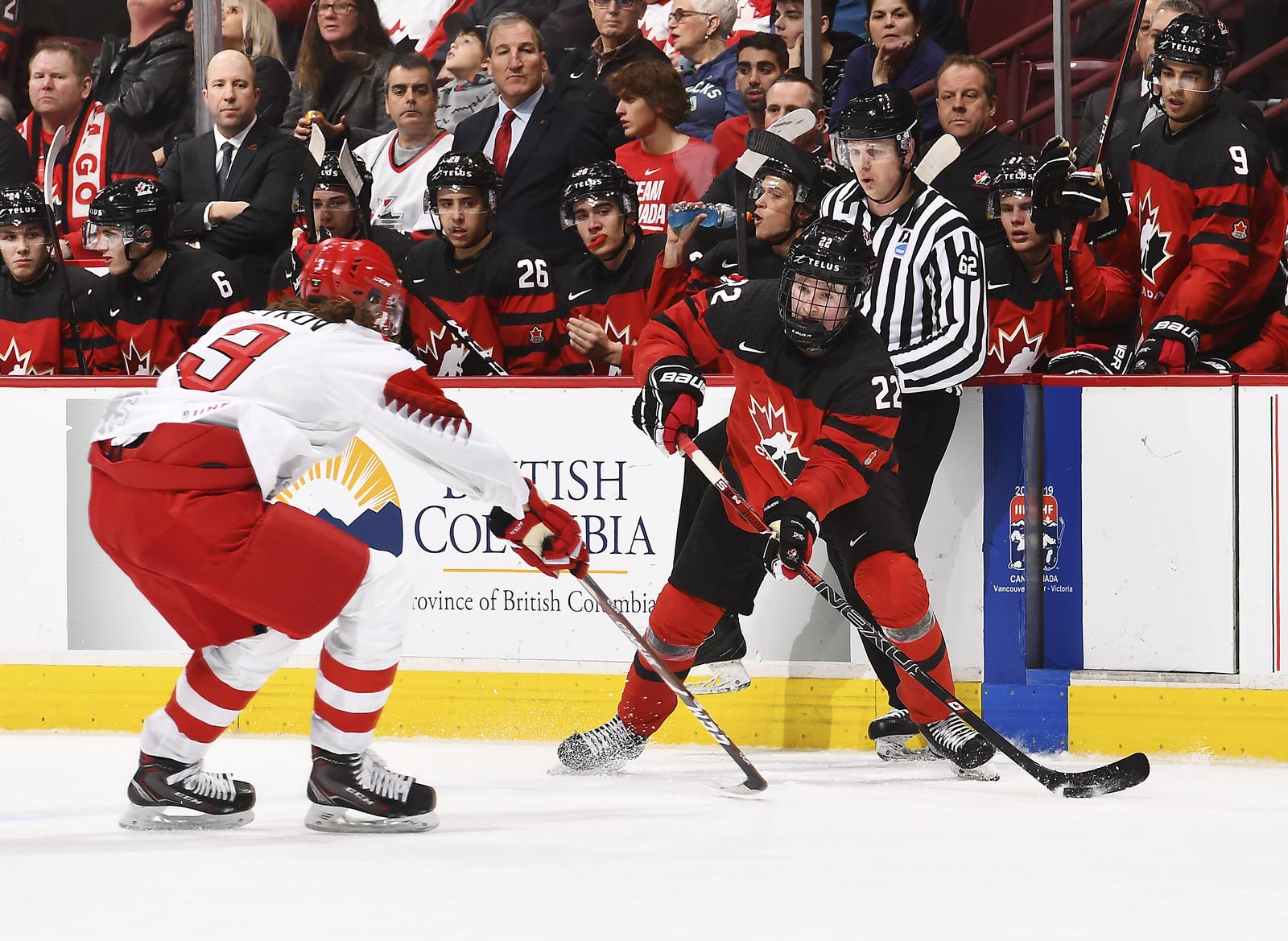 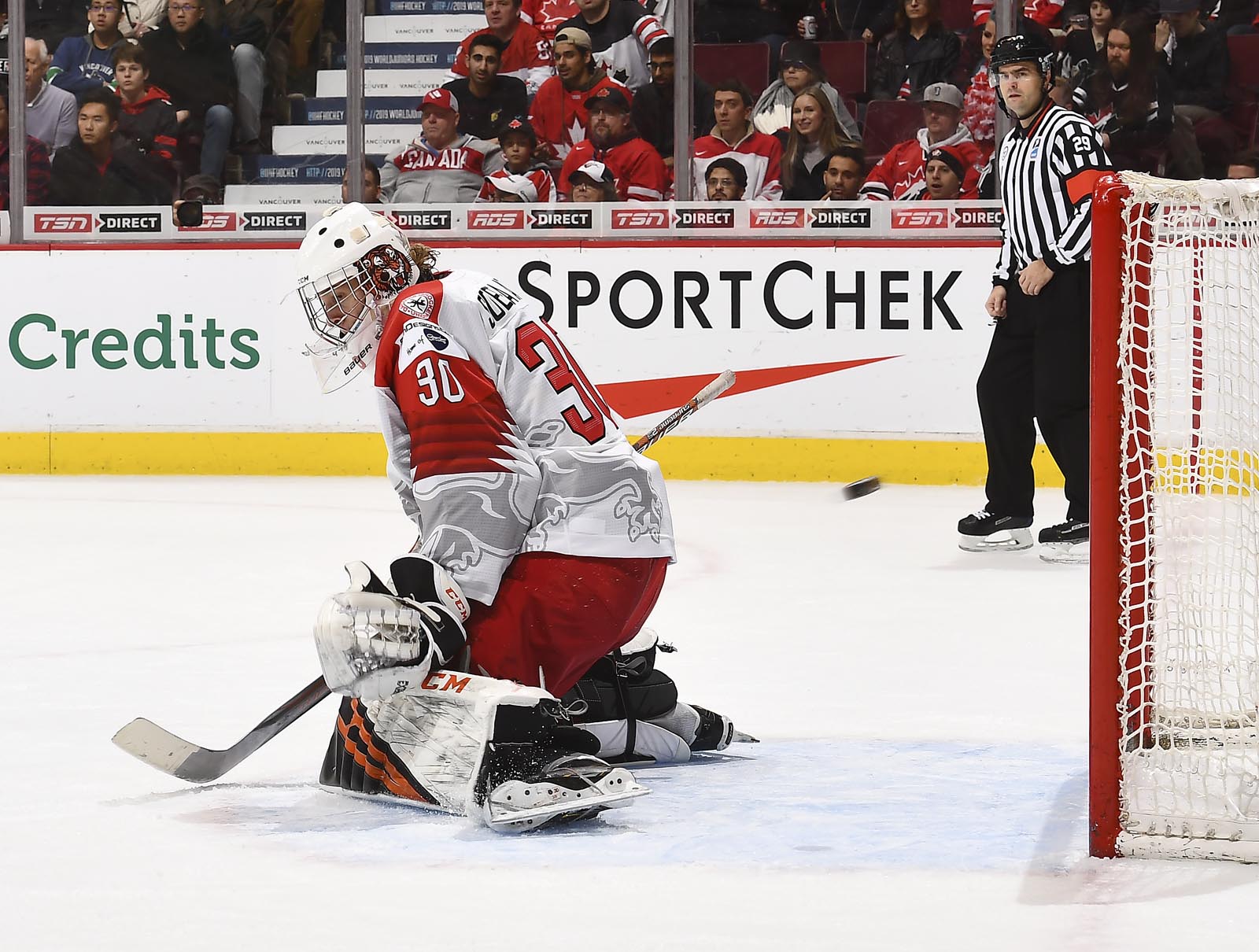 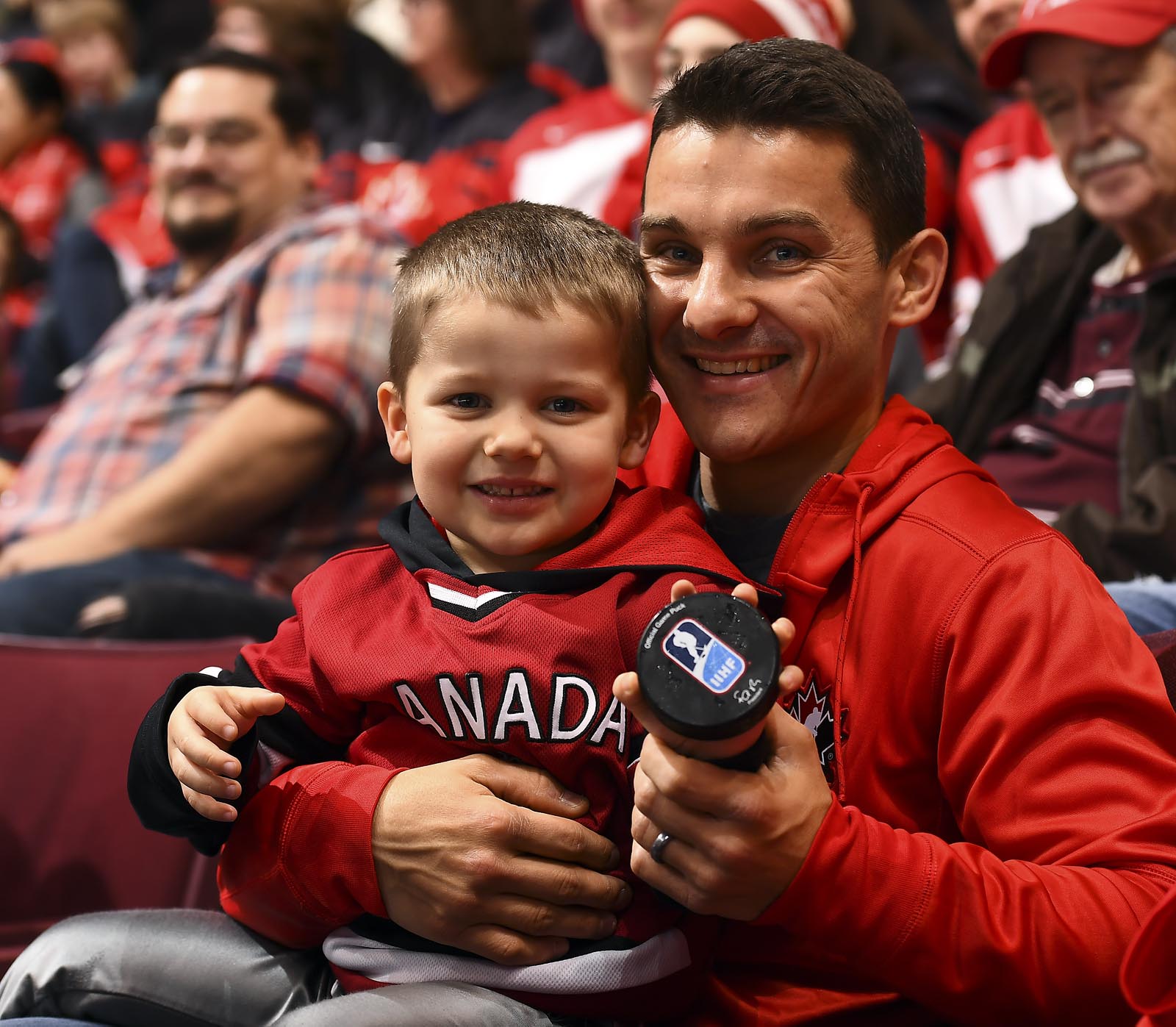 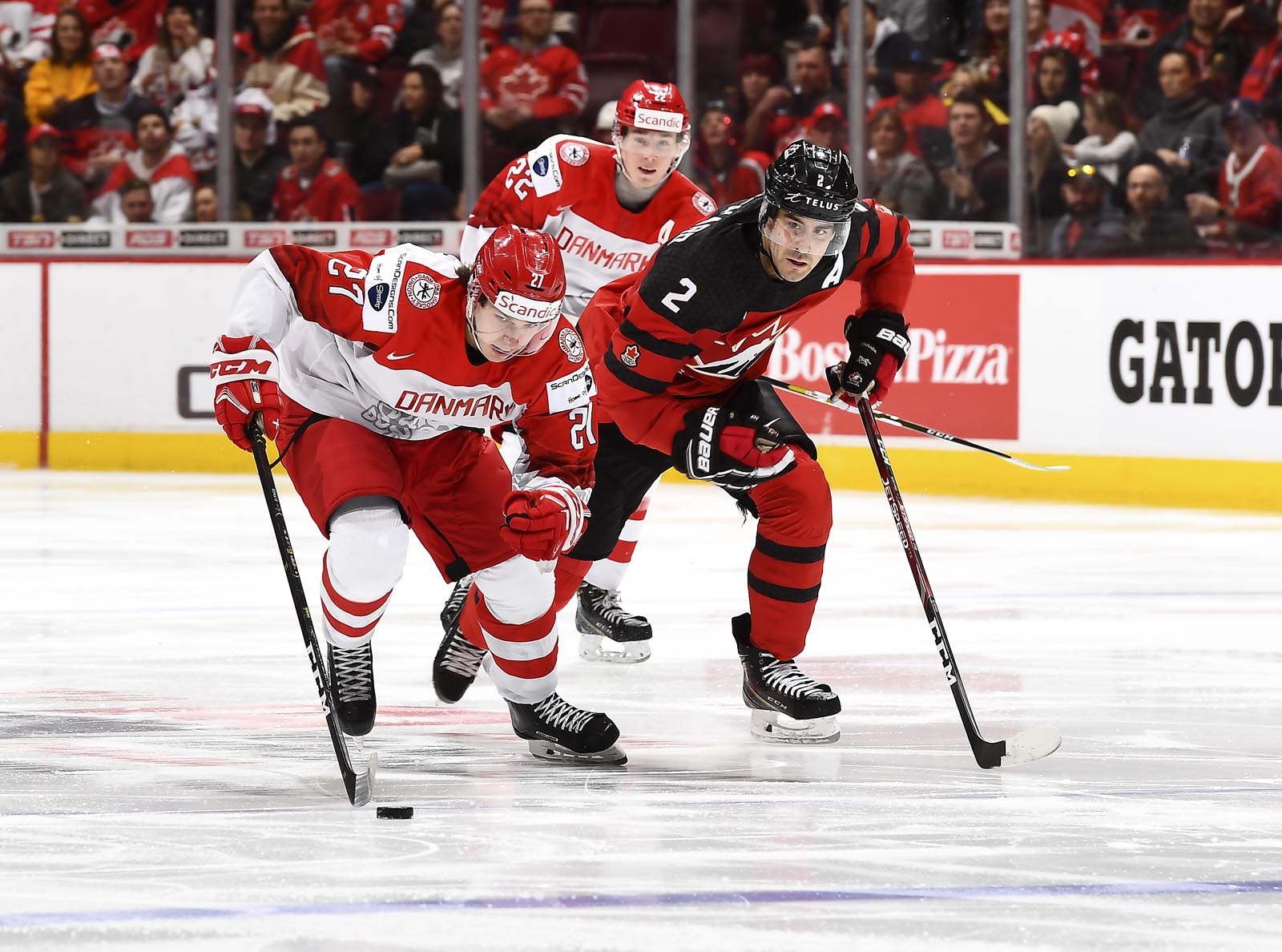 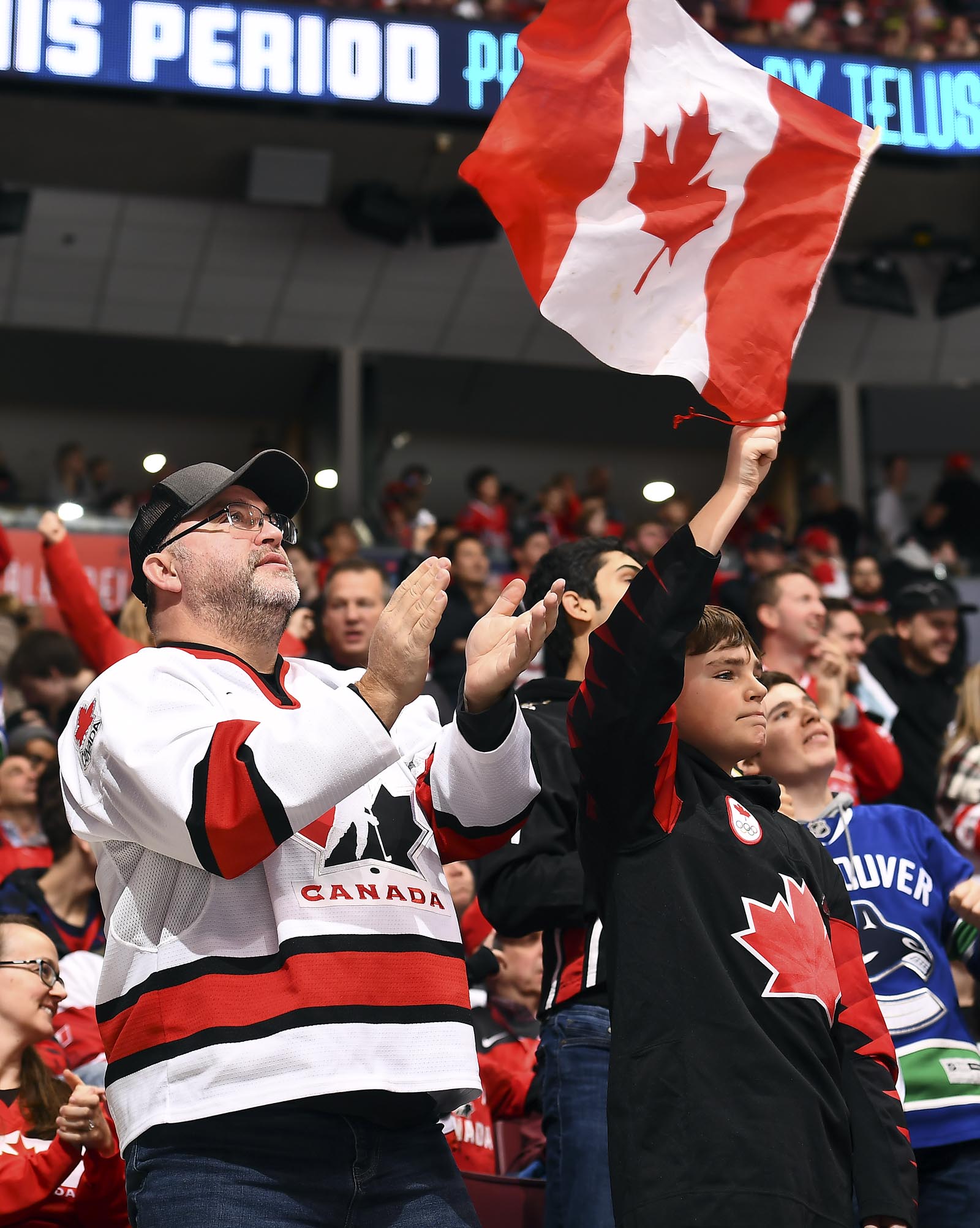 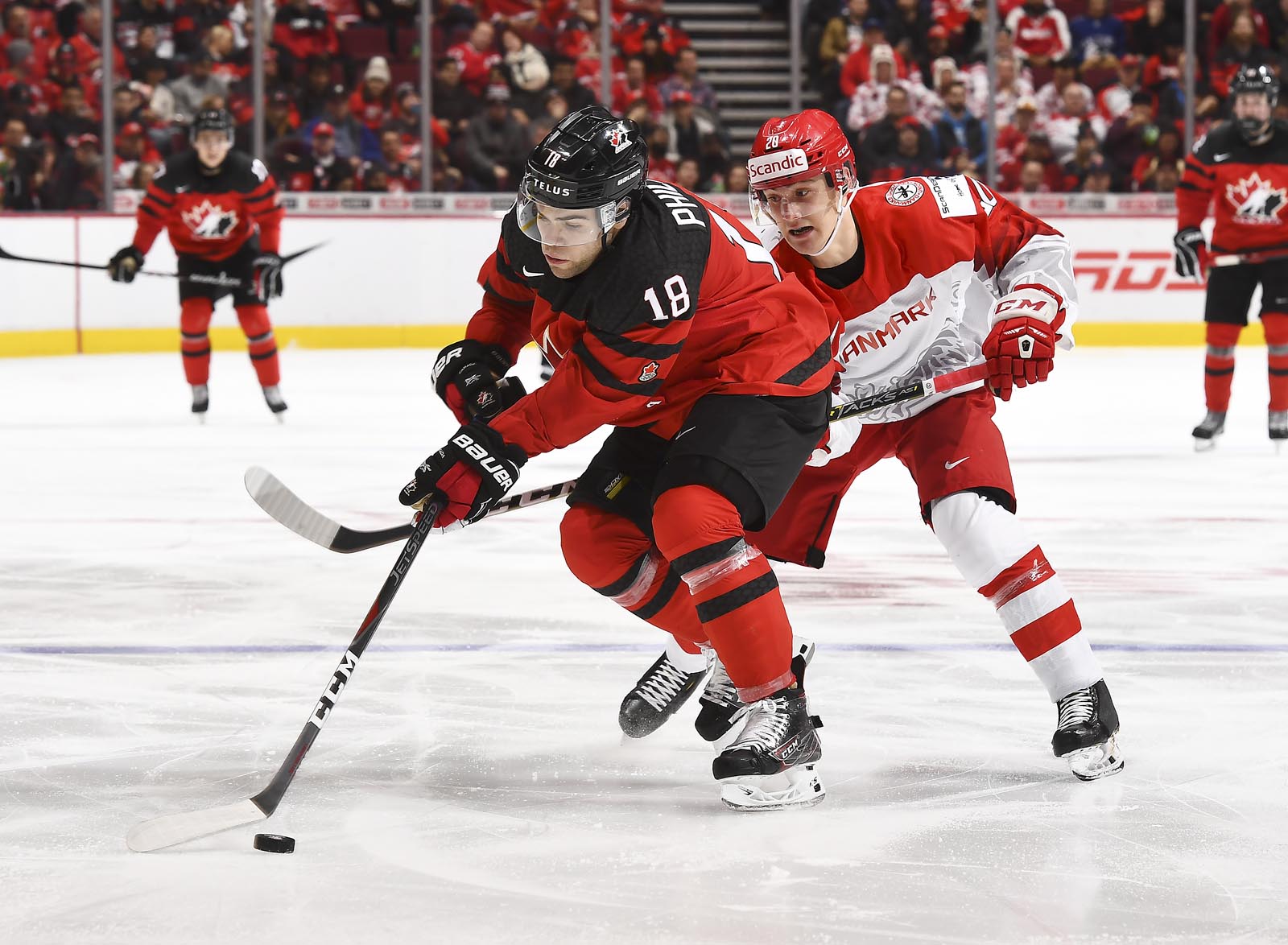 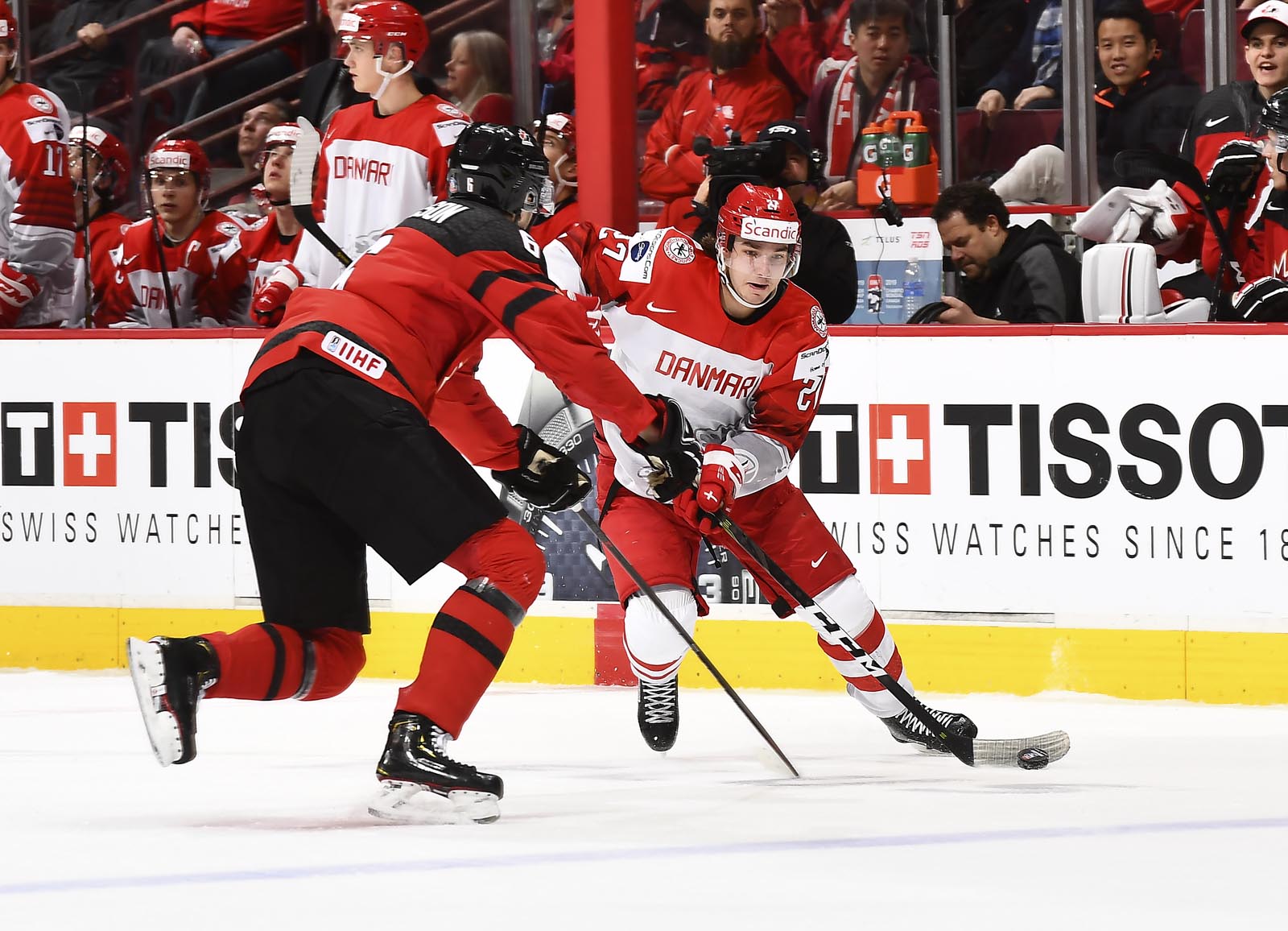 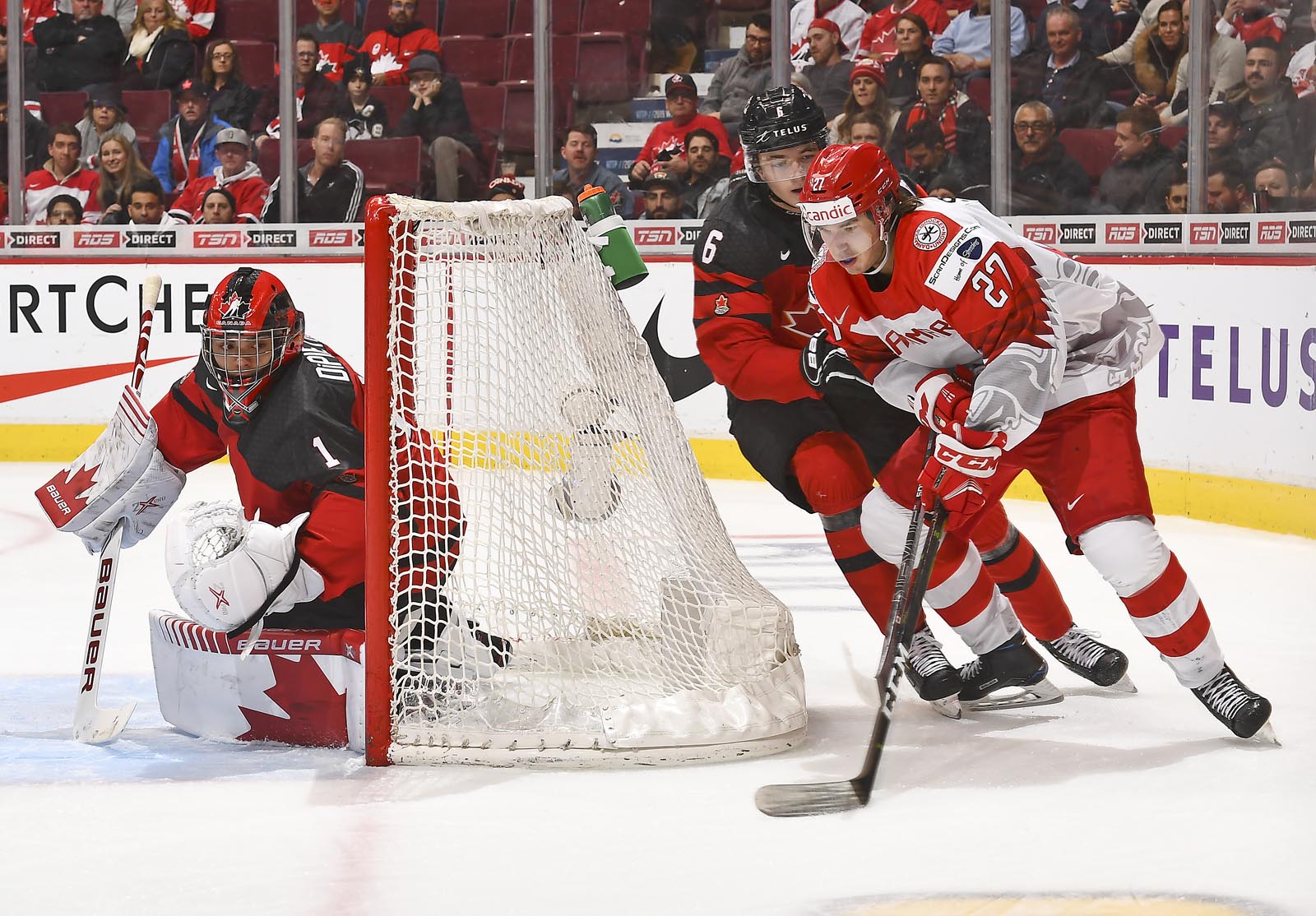