Ruthless Korea demolishes Iceland
photo: Dean Woolley
share
Korea posted its second victory in Nottingham with a commanding performance against Iceland. The offence went goal crazy, putting up double figures in a comprehensive victory. At the other end, the two 16-year-old goalies, Inhye Jang and Yejin Lee shared their team's second shut-out in two games as the defence clamped down on the Icelandic attack. Fellow teenager Eunji Lee continued her bright start in international hockey with another goal and an assist in the first period to spark an impressive offensive display.

Korea's head coach, Sang Jun Kim, worked with many of his team's new faces during his time as U18 head coach. "I got to know these young players very well," he said through a translator. "They have worked hard and followed our guidance over the last couple of years and I think now they are showing their potential at this tournament."

For Iceland, once again, this was another difficult day. Blanked by GB in the opening game, Jon Gislason’s team was unable to muster a shot on goal in the first period as Korea dominated every inch of the ice.

That rock-solid defence, too, is the result of the systems instilled in the team throughout the preparations. "The D-zone is very important for our team," coach Kim added. "A lot of our practice focuses on D-zone coverage. We want to pressure the opposition, pressure the puck, then when we get possession we can go to the O-zone and play our game."

It took just eight minutes for that plan to pay off when Yunjung Choi’s good work was finished off by Yunha Song to open the scoring. Moments later, Jongah Park potted the second, intercepting the puck in centre ice and exchanging passes with Eunji Lee before beating Andrea Bachmann in the Icelandic net. Lee was the next to score as Korea’s power play strutted its stuff. Her wrister from the right-hand circle whistled past Bachmann.

Any hopes of an Iceland revival were quashed at the start of the second as Korea added two more goals in the first three-and-a-half minutes of the frame. Sieun Choi forced home a loose puck from close range to make it 4-0 before Chaelin Park slalomed past a defender and fired home number five.

There was a shot on the Korean net at last in the 25th minute when Herborg Geirsdottir got on a solo rush. However, the 20-year-old Swedish-based forward was unable to find a way past Yejin Lee, another Korean teenager who was introduced for her senior international debut at the first intermission of Friday's game. At the other end, Heewon Kim’s charge was halted by a trip that left the experienced forward down on the ice for some time. Happily she was able to return to the game, and Korea punished Iceland on the subsequent power play with Ye Eun Park forcing the puck home via a deflection.

After Thursday evening’s loss to Britain, Iceland showed visible signs of tiredness and as the game progressed it was getting harder and harder for the team to stay out of the penalty box. In the third period, the island nation had to defend 46 seconds of 3-on-5 play. That was achieved, thanks in part to a good sliding save from Bachmann, but Korea was able to convert the 5-on-4 power play through Jiyeon Choi. There was more to come, with Selin Kim added a goal to two earlier assists while Heewon got her second helper of the game.

By now, everything Korea attempted was coming off. Even when Iceland got a double power play, a breakdown in the offensive zone enabled Heewon to race down the ice and claim a shorthanded goal against an increasingly demoralized opponent. Back at even strength, captain Jiyeon Choi added a tenth goal and Bachmann was replaced by Birtu Helgudottir.

With victories in its first two games, Korea now advances to a Sunday night showdown against Great Britain. A win against the tournament host would see Sang Jun Kim’s team justify its top seeding here and advance to next month’s final qualification round. Iceland finishes against Slovenia, looking for some consolation after two difficult games in Nottingham. 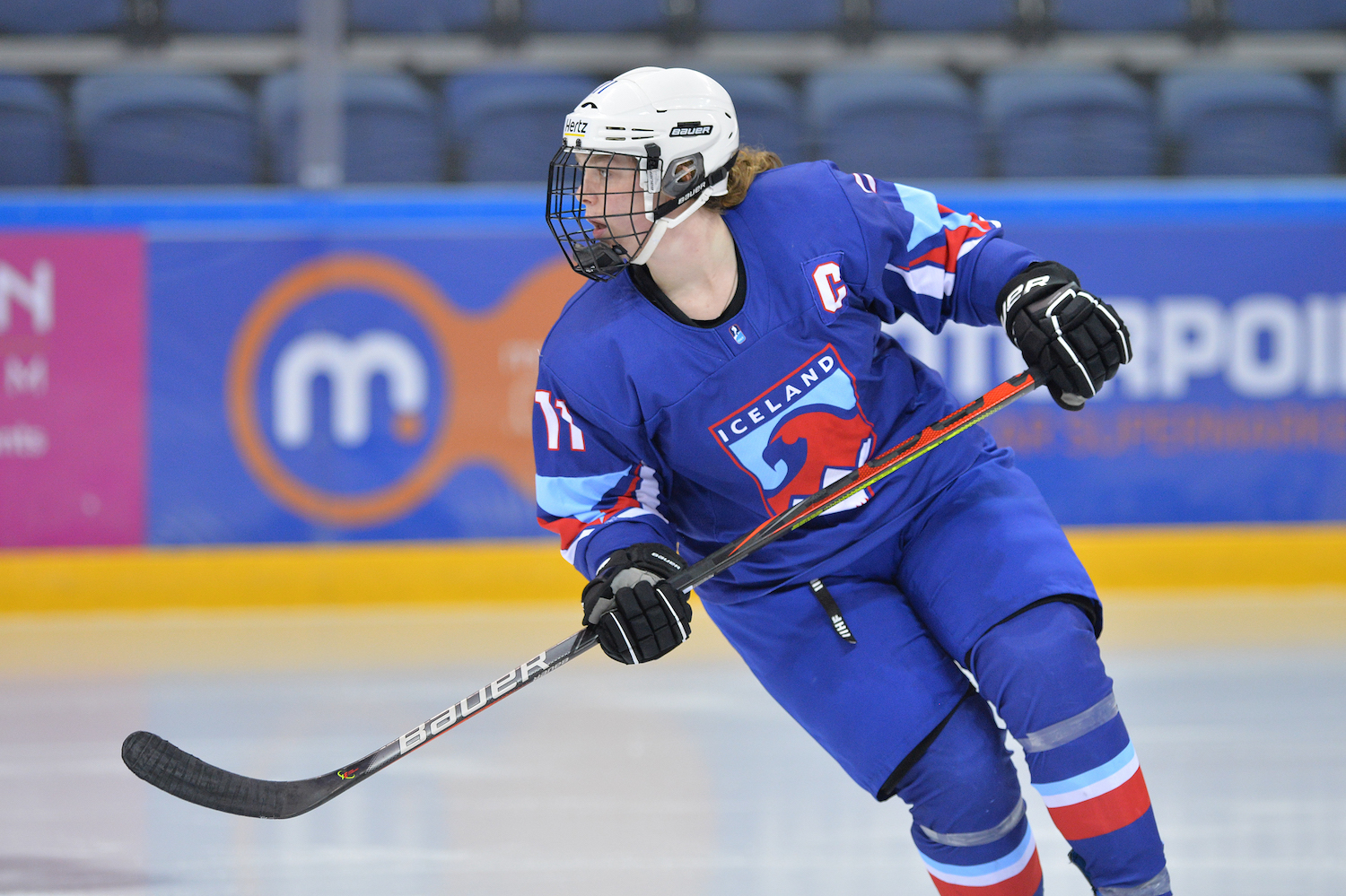 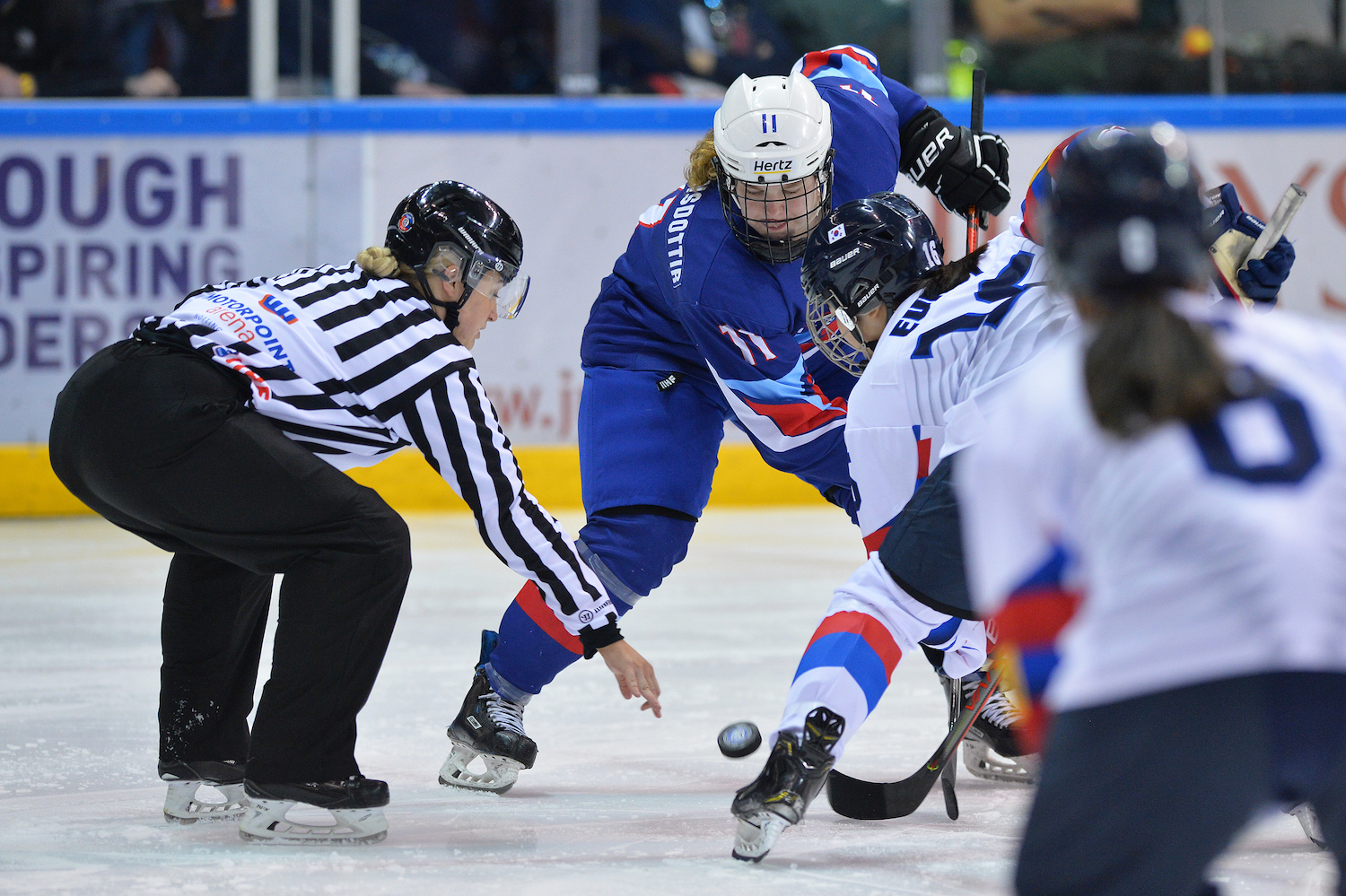 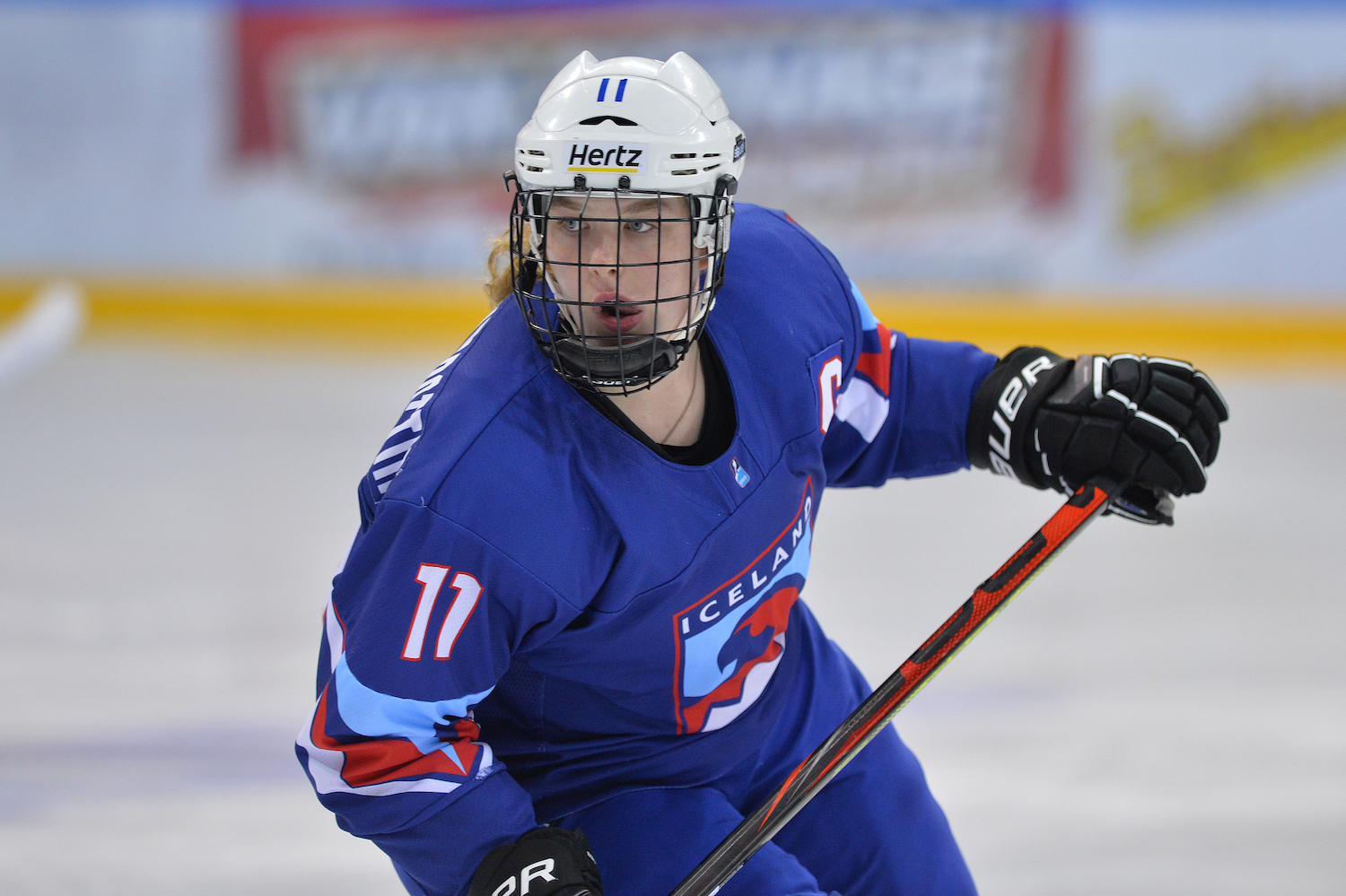 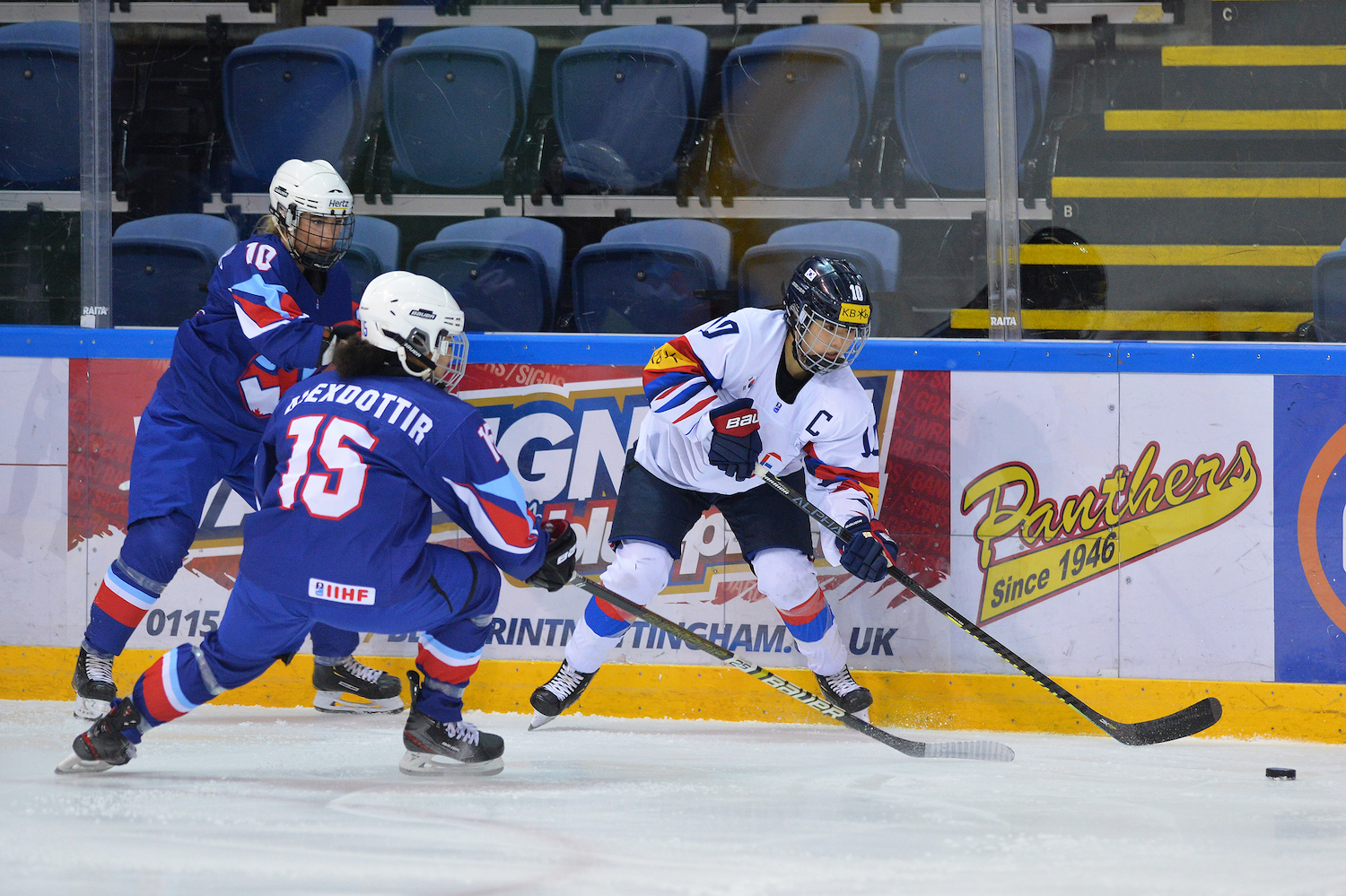 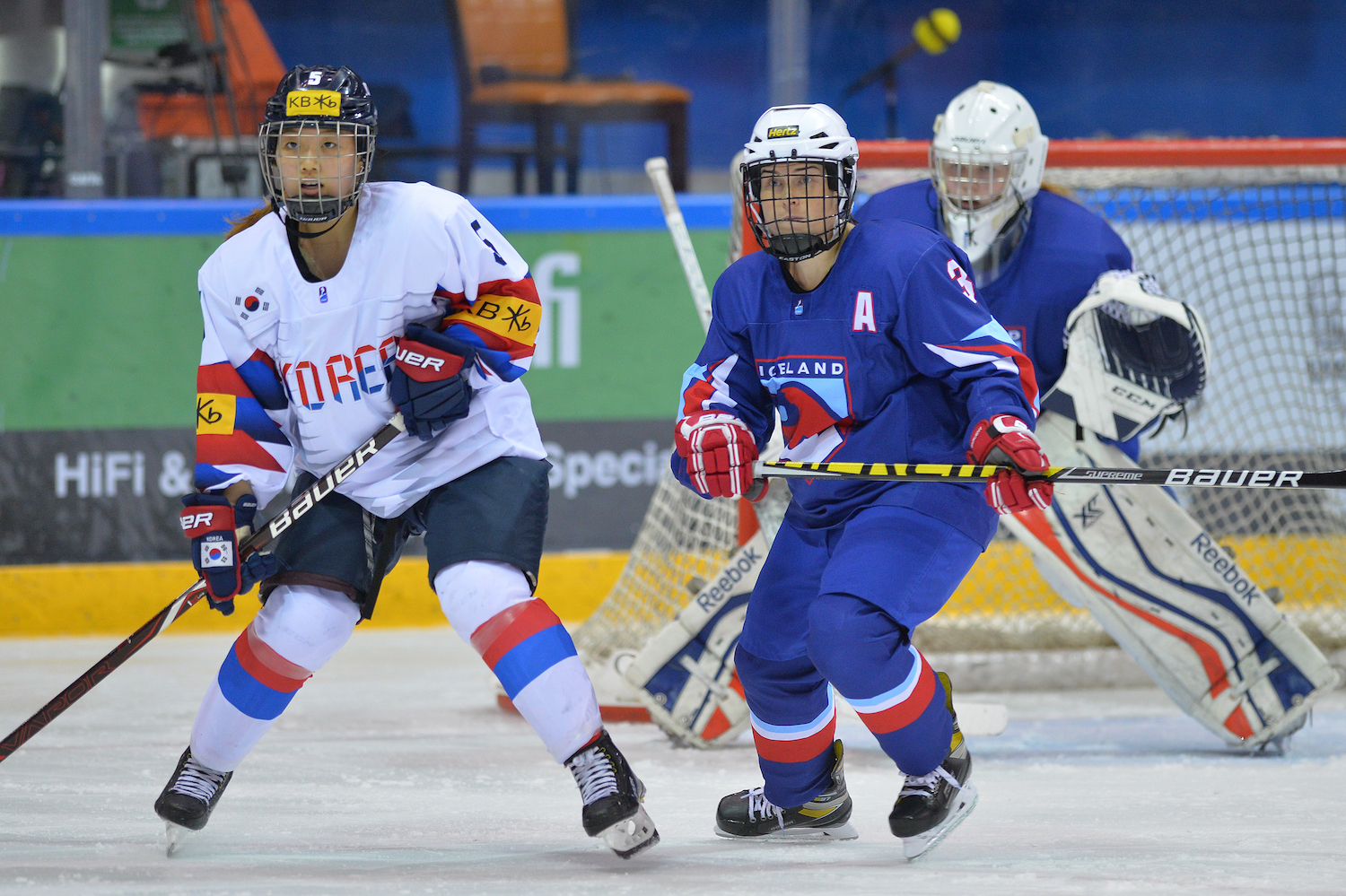 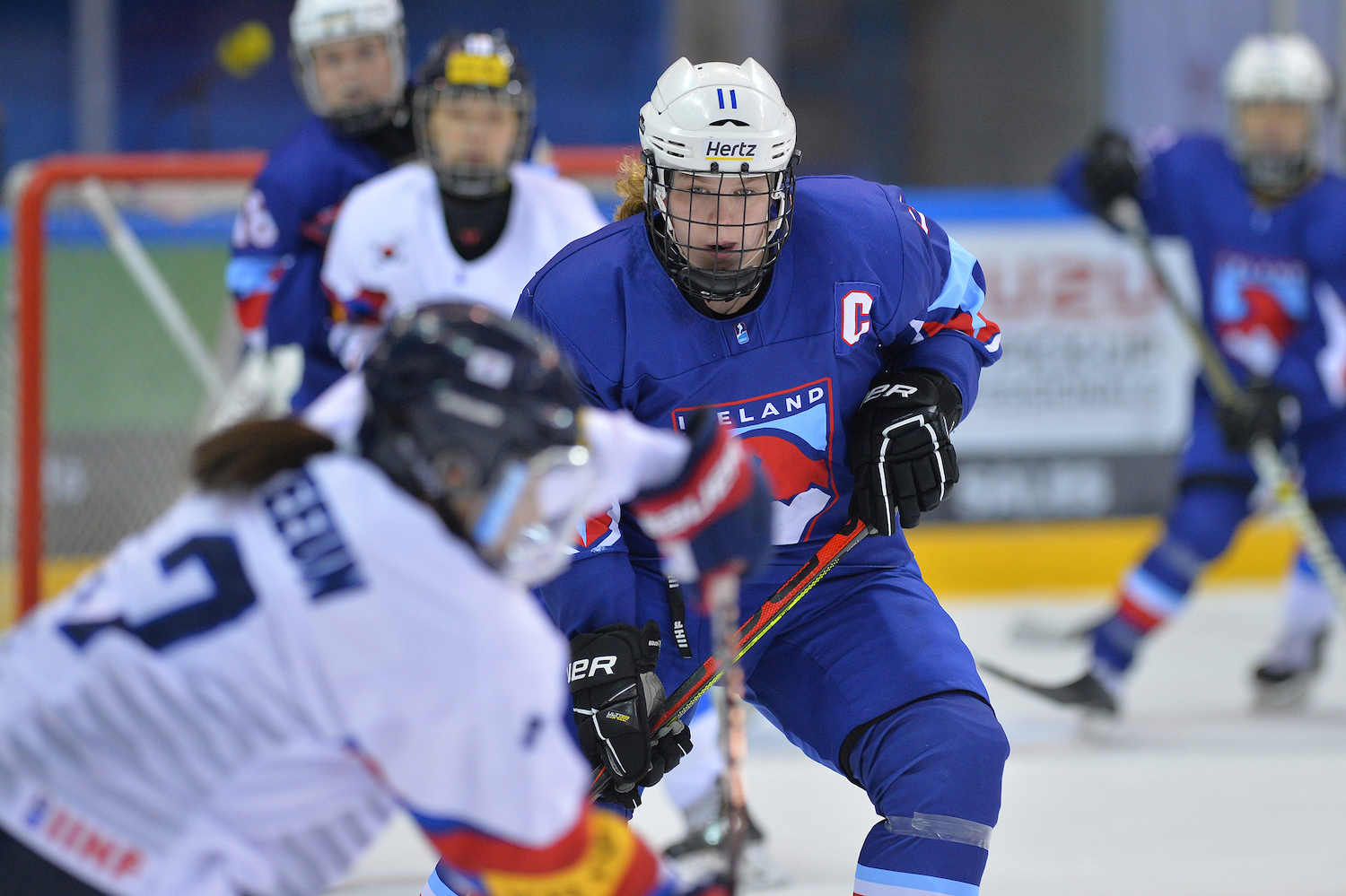 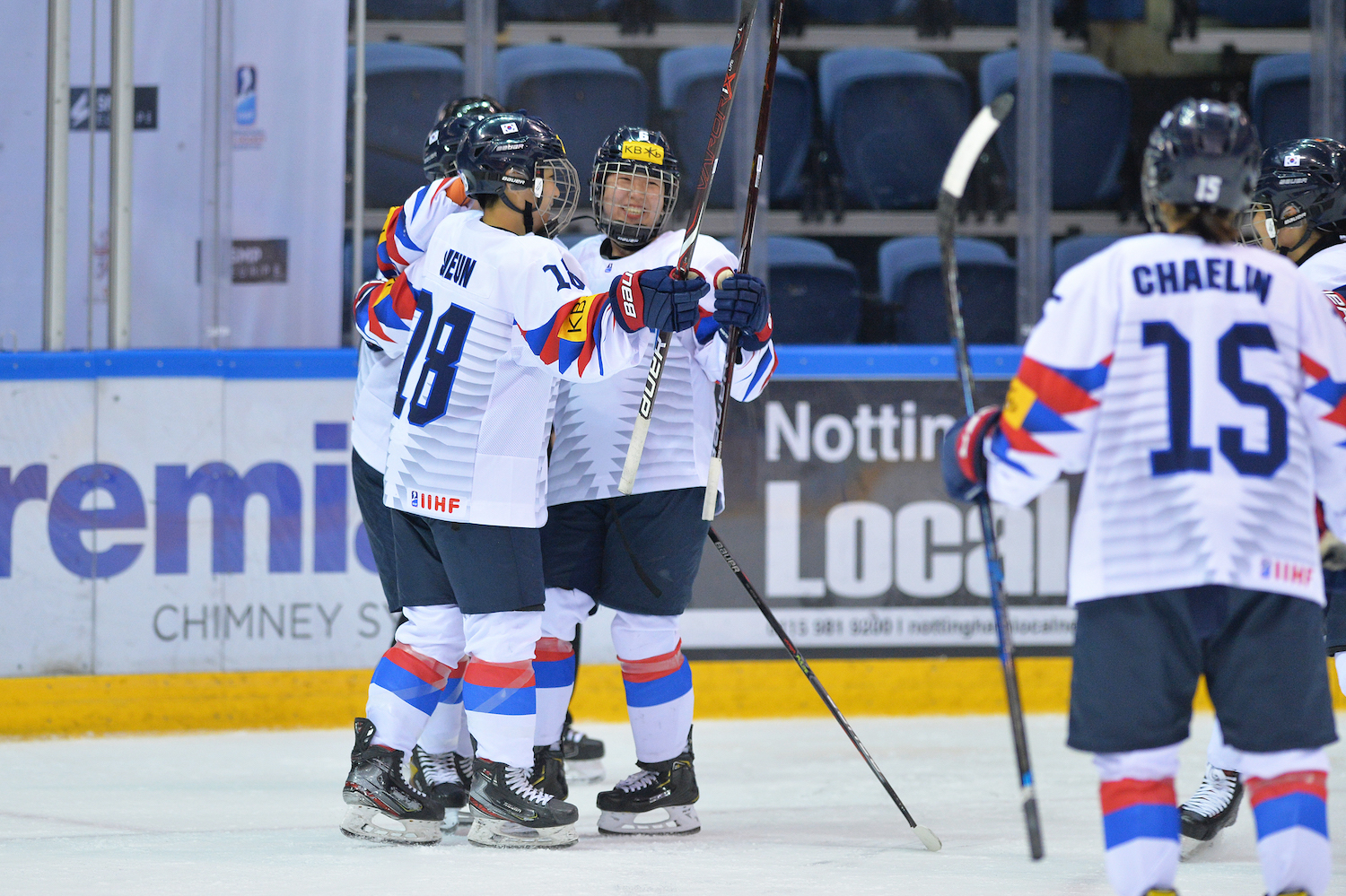 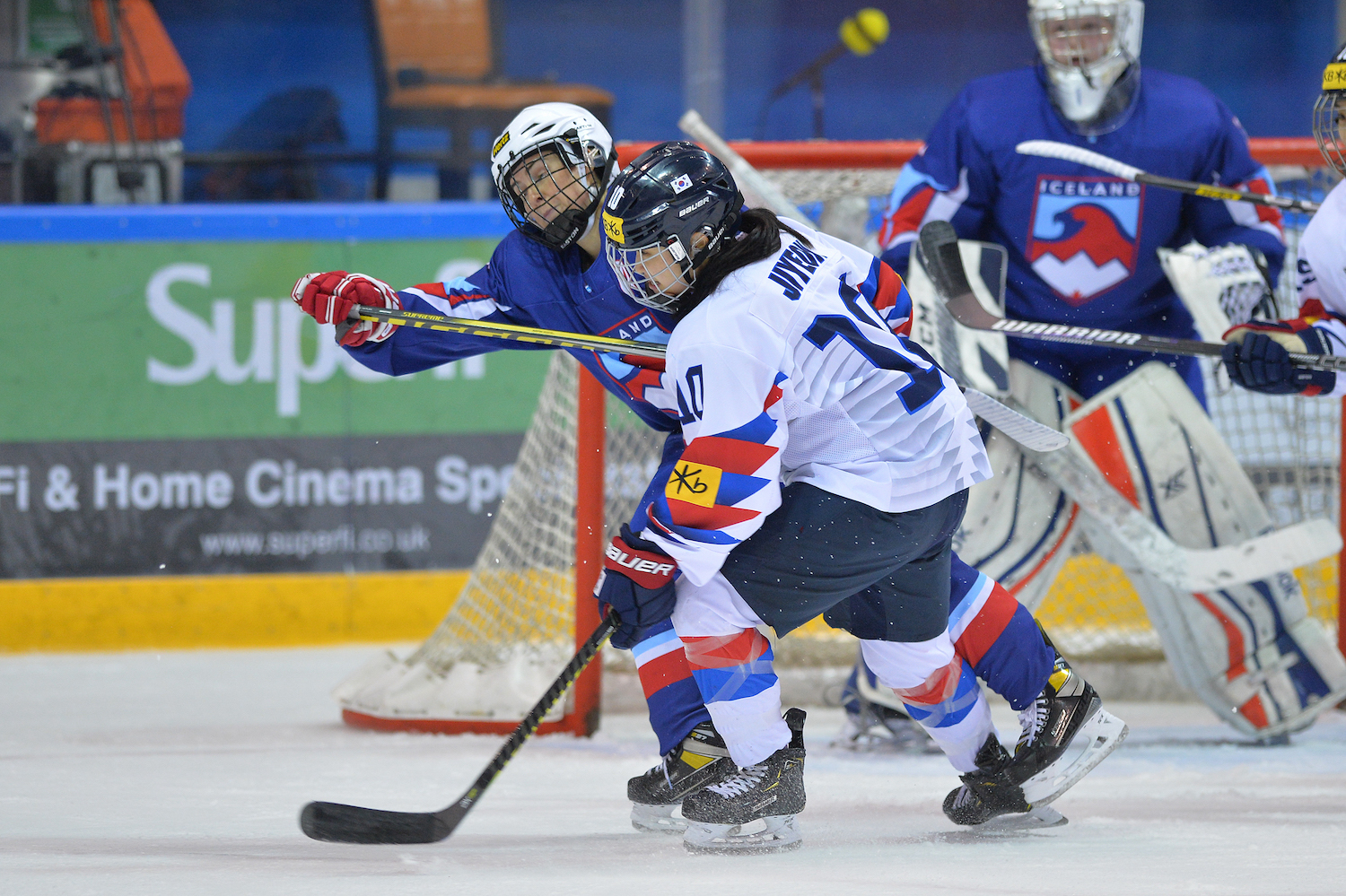 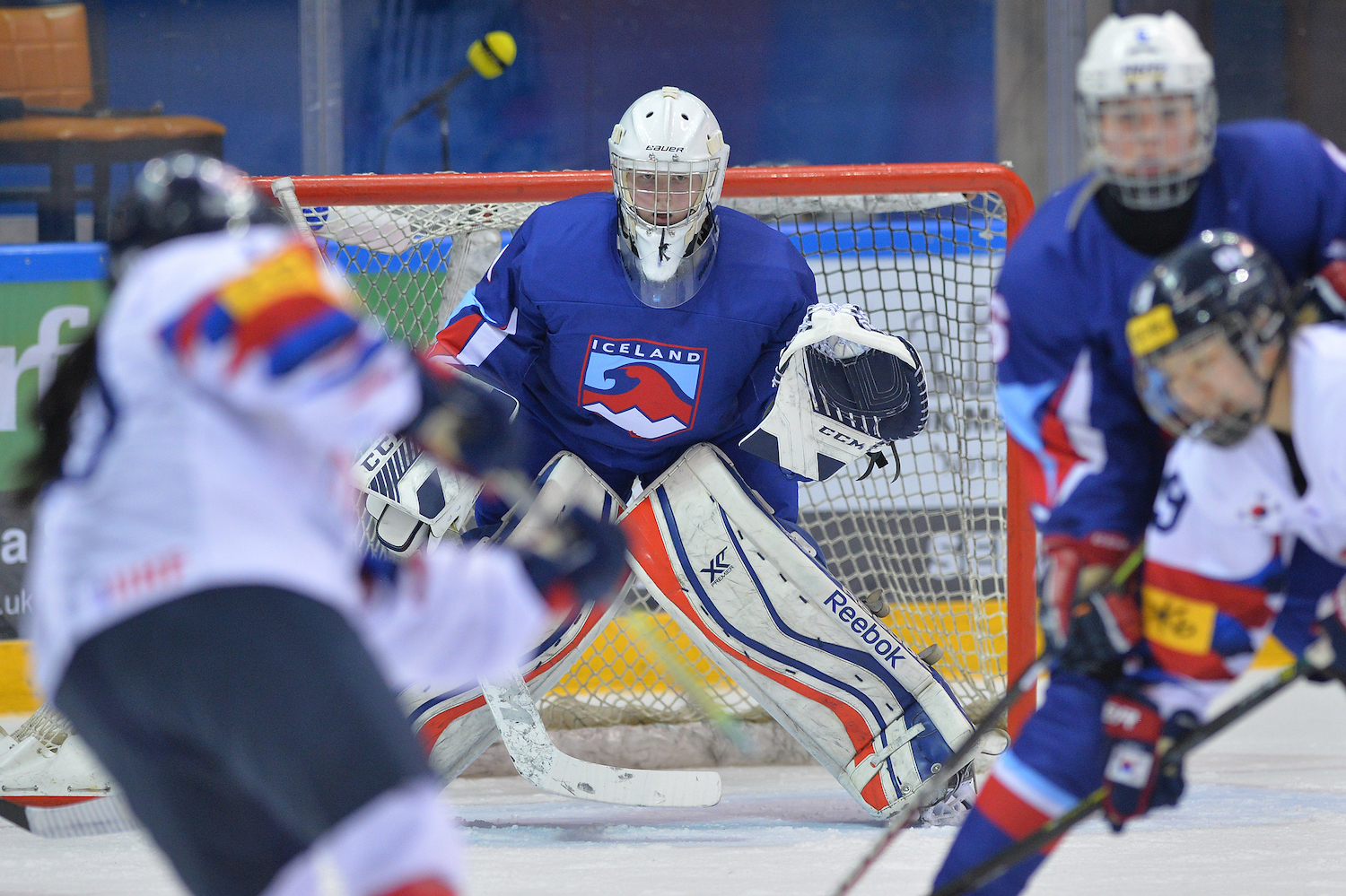 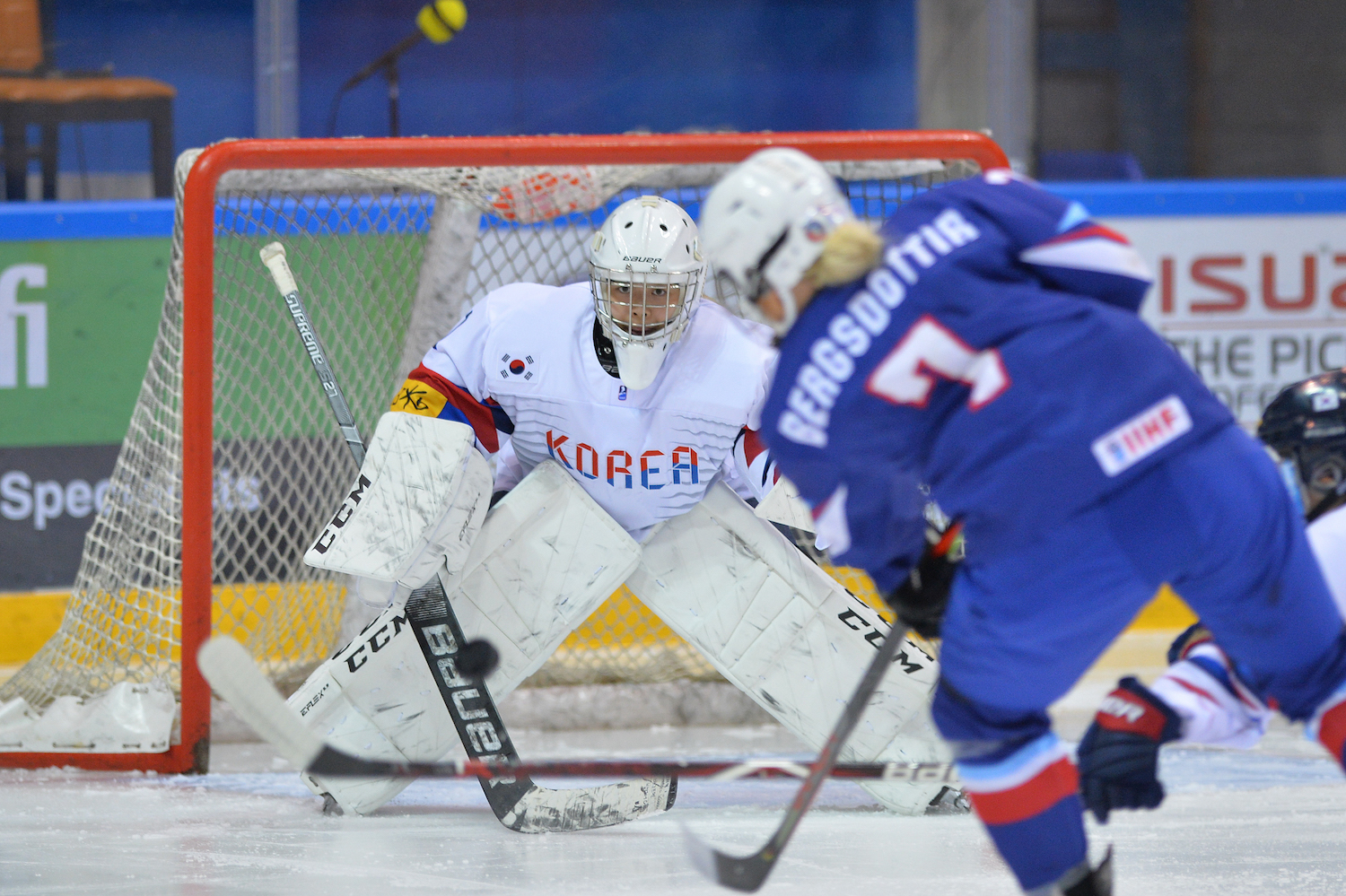 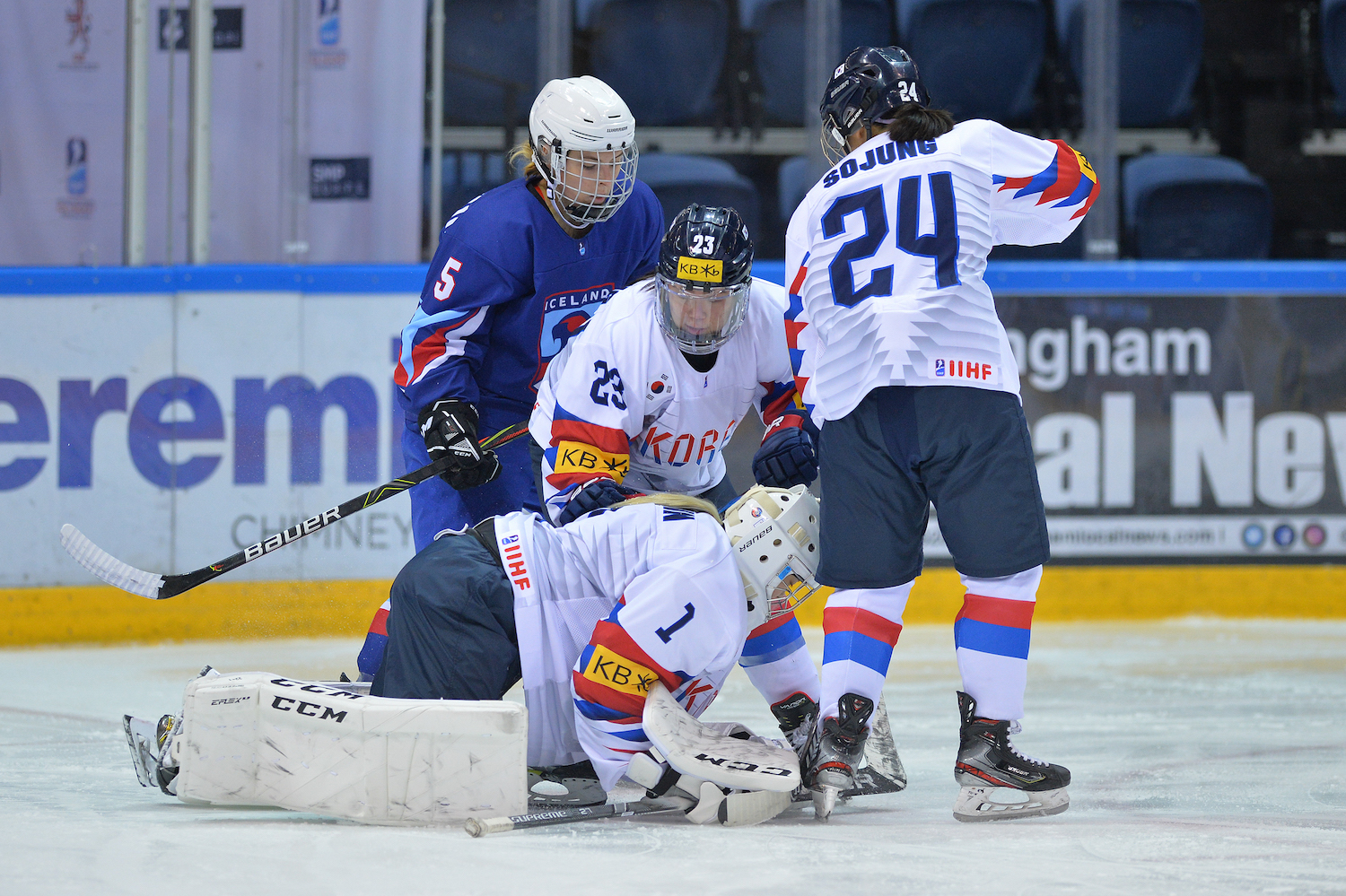 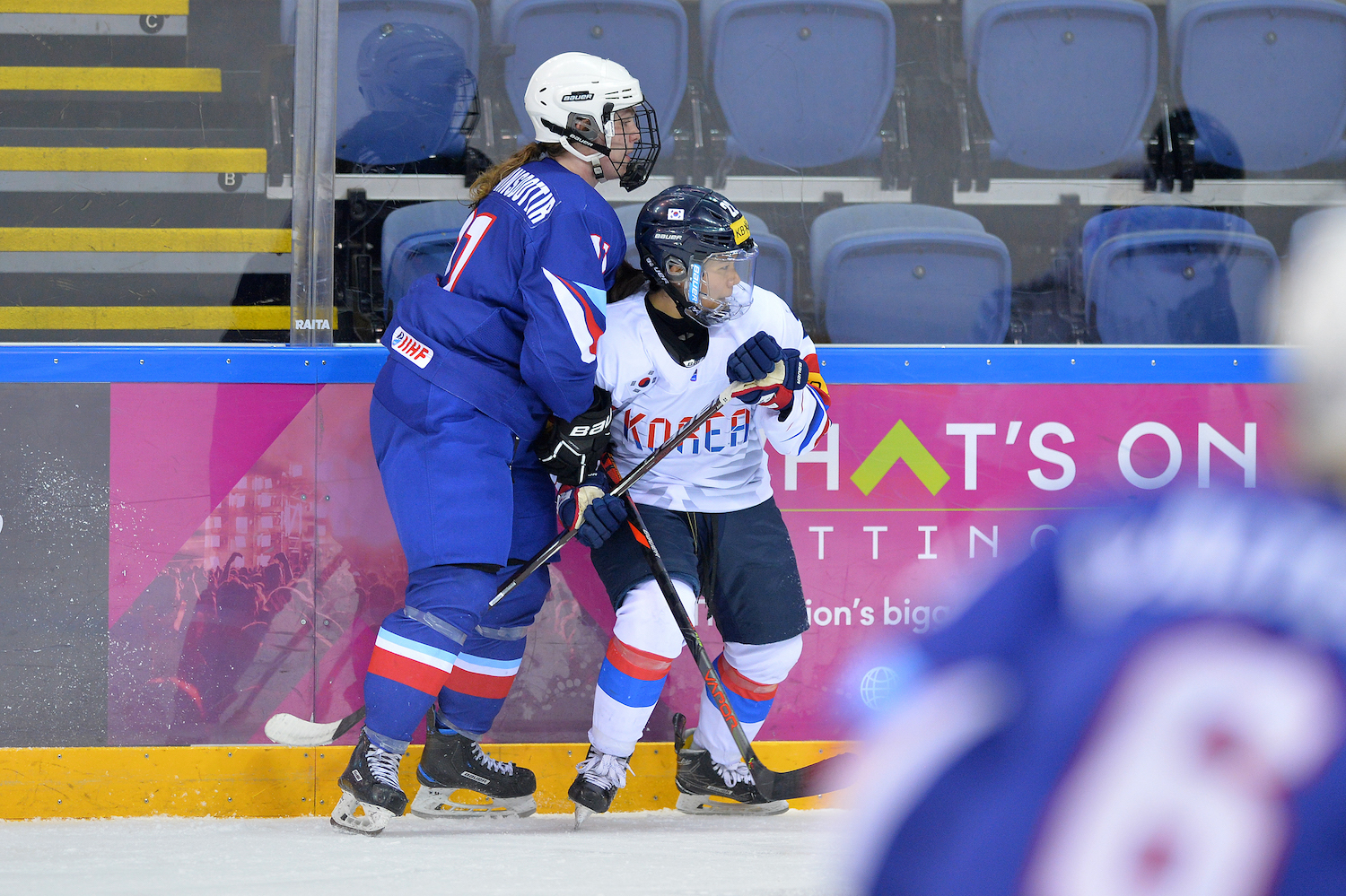 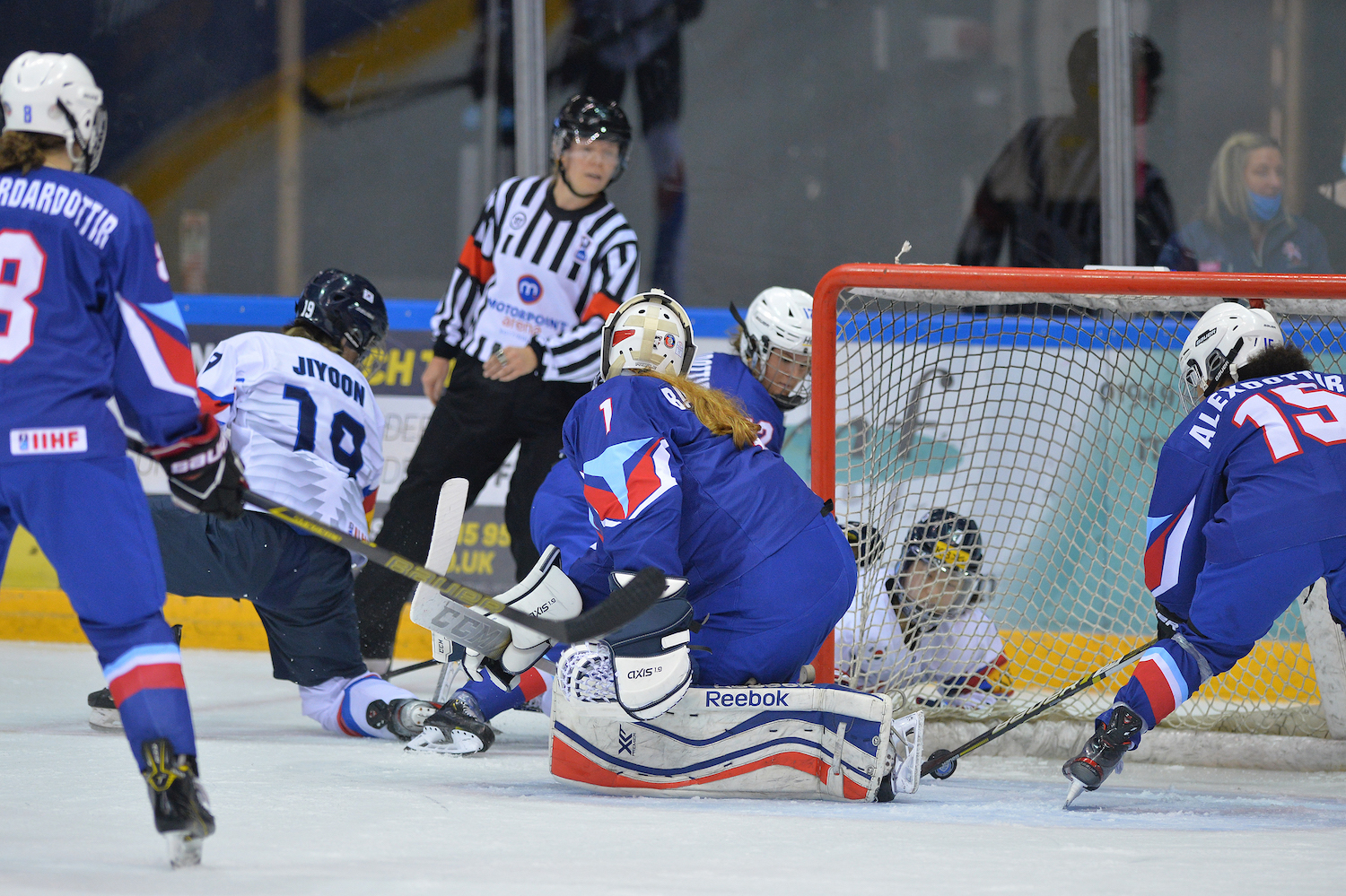 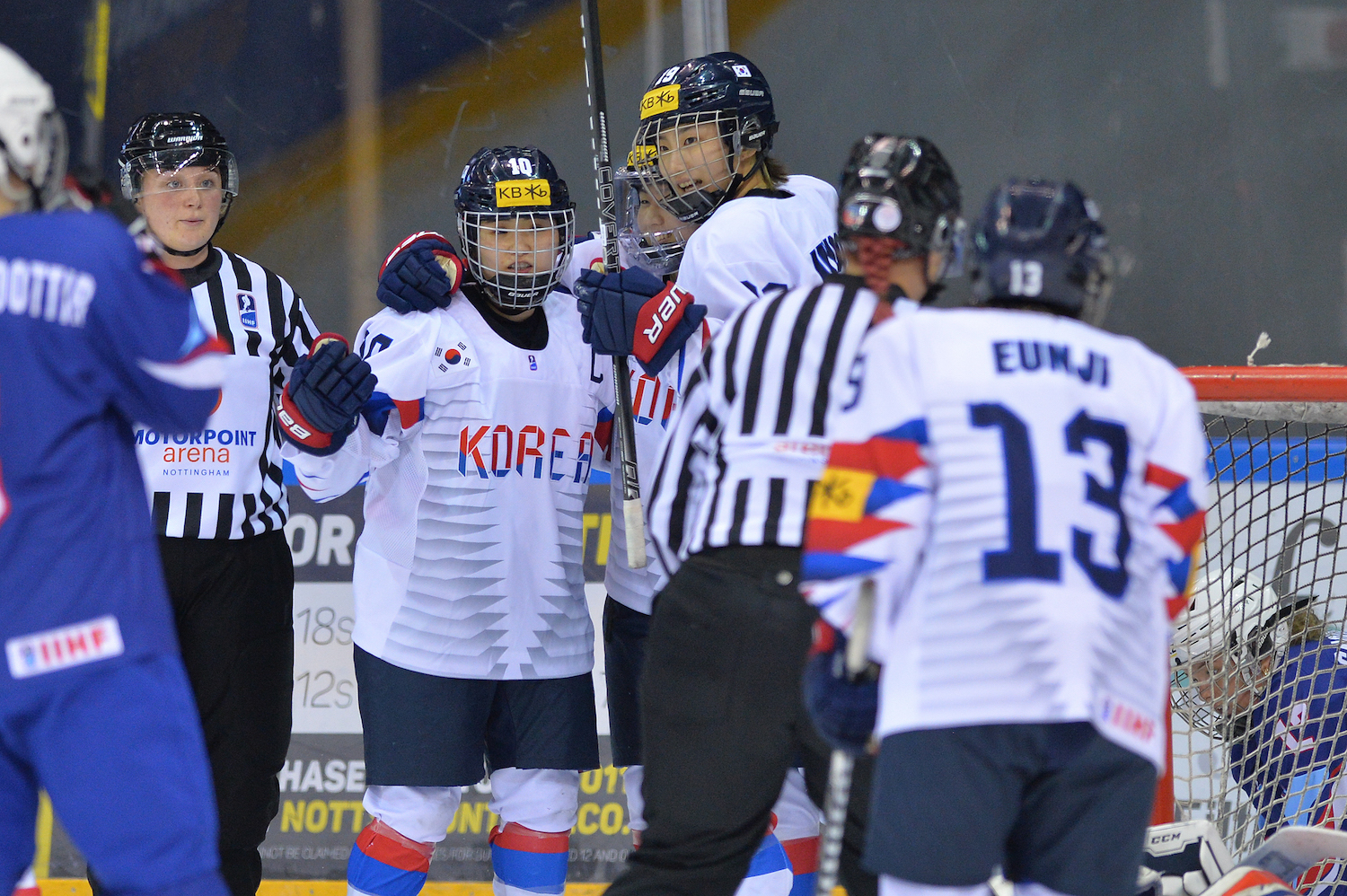 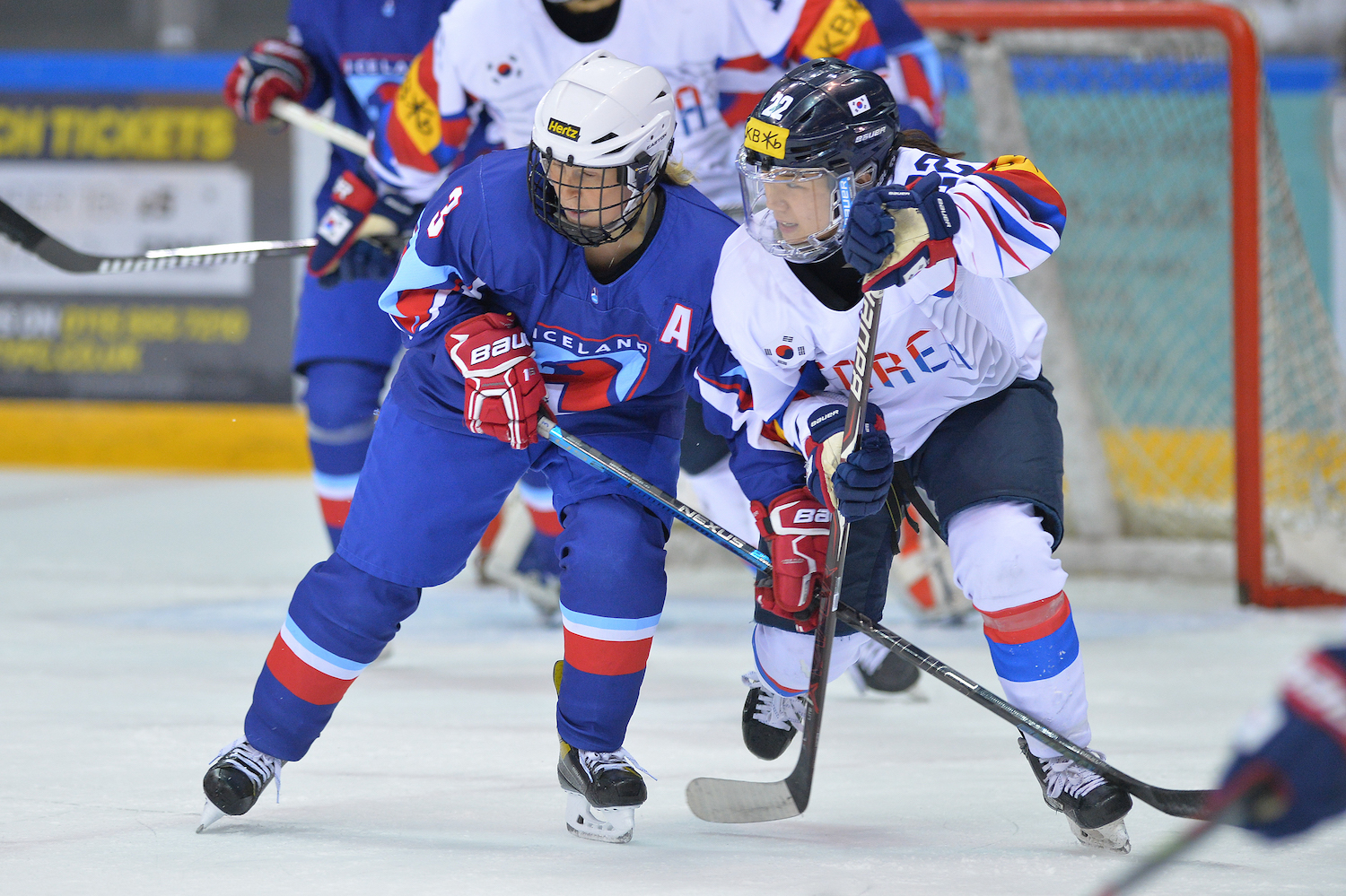 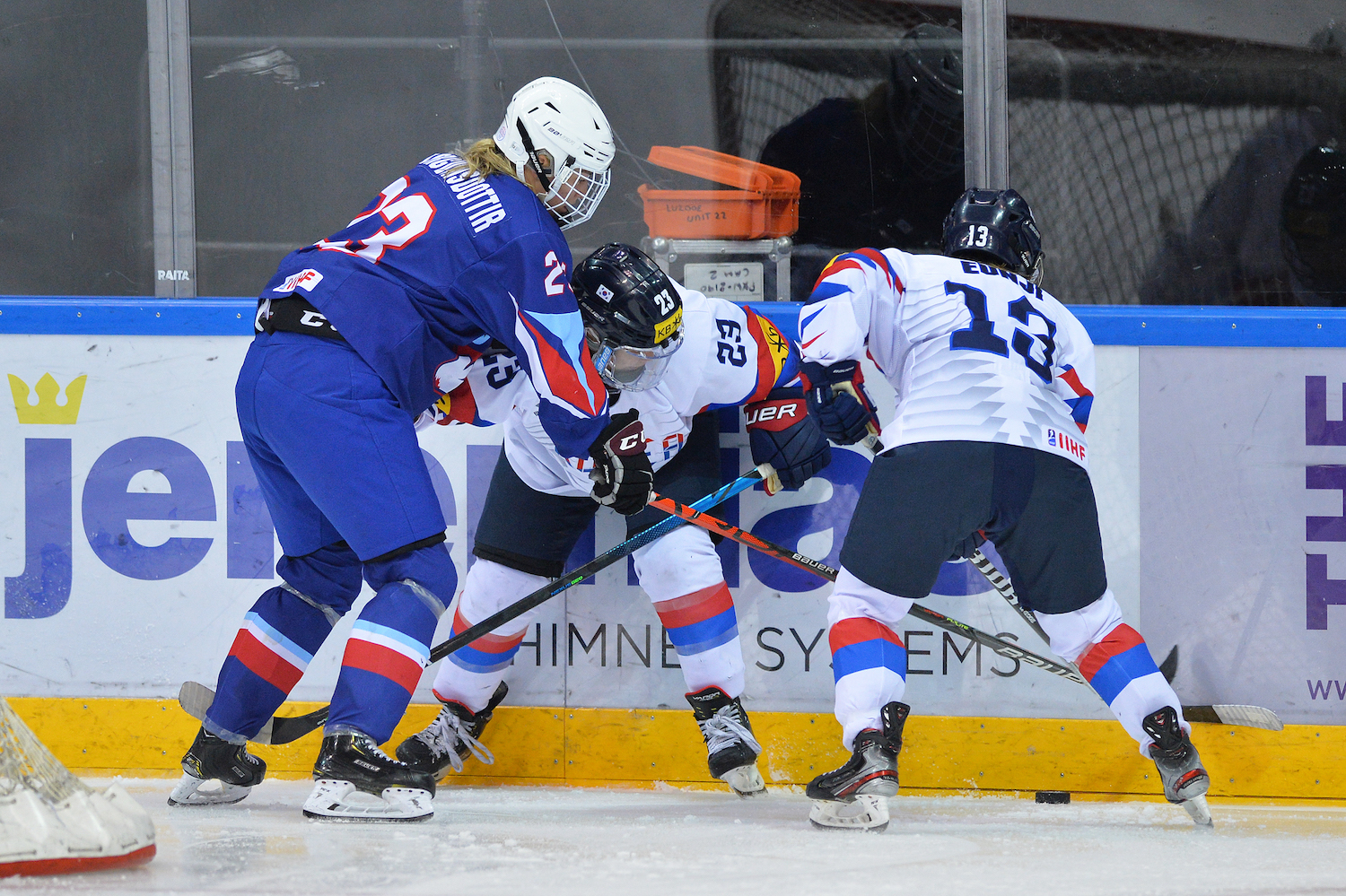 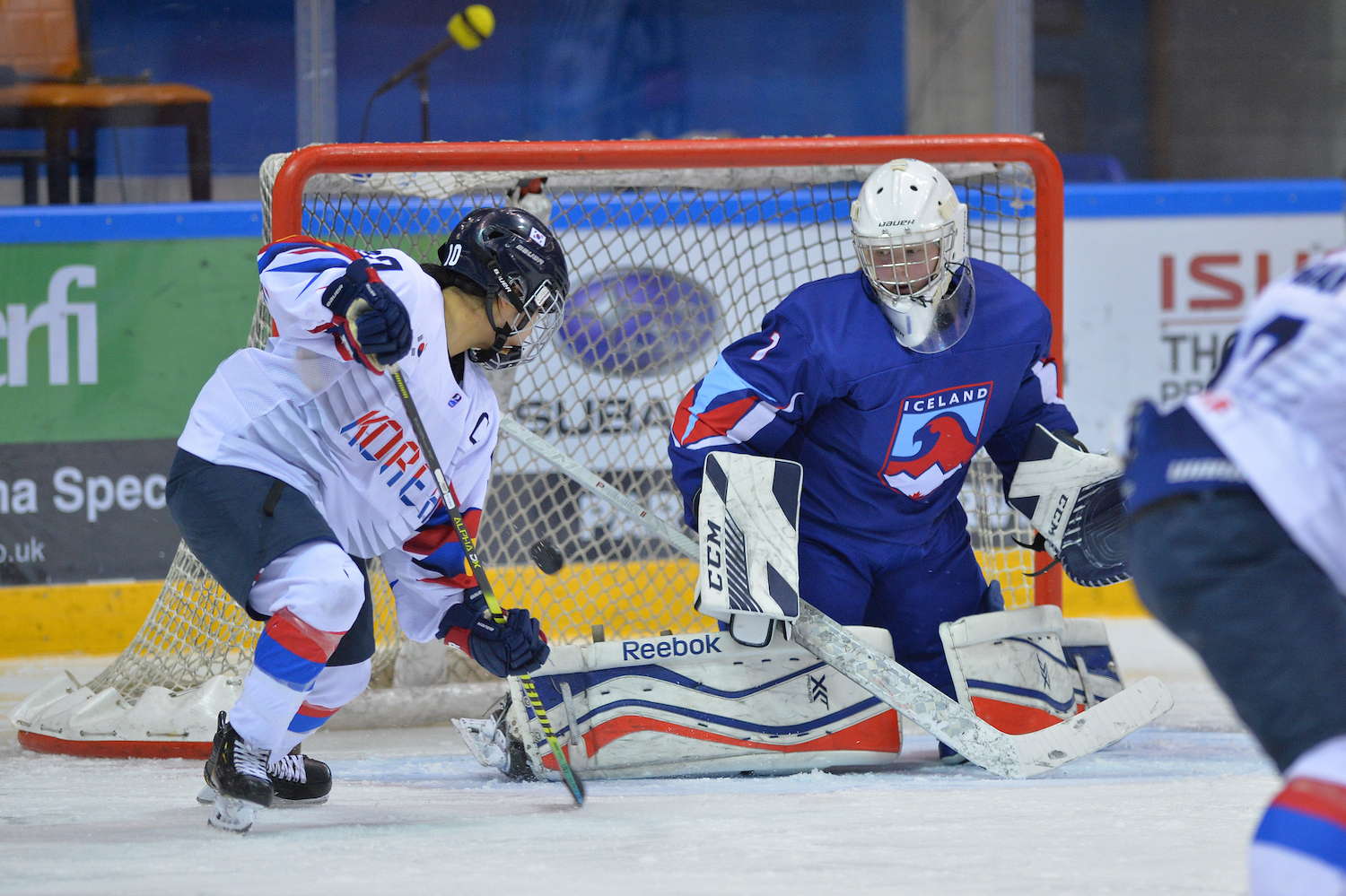 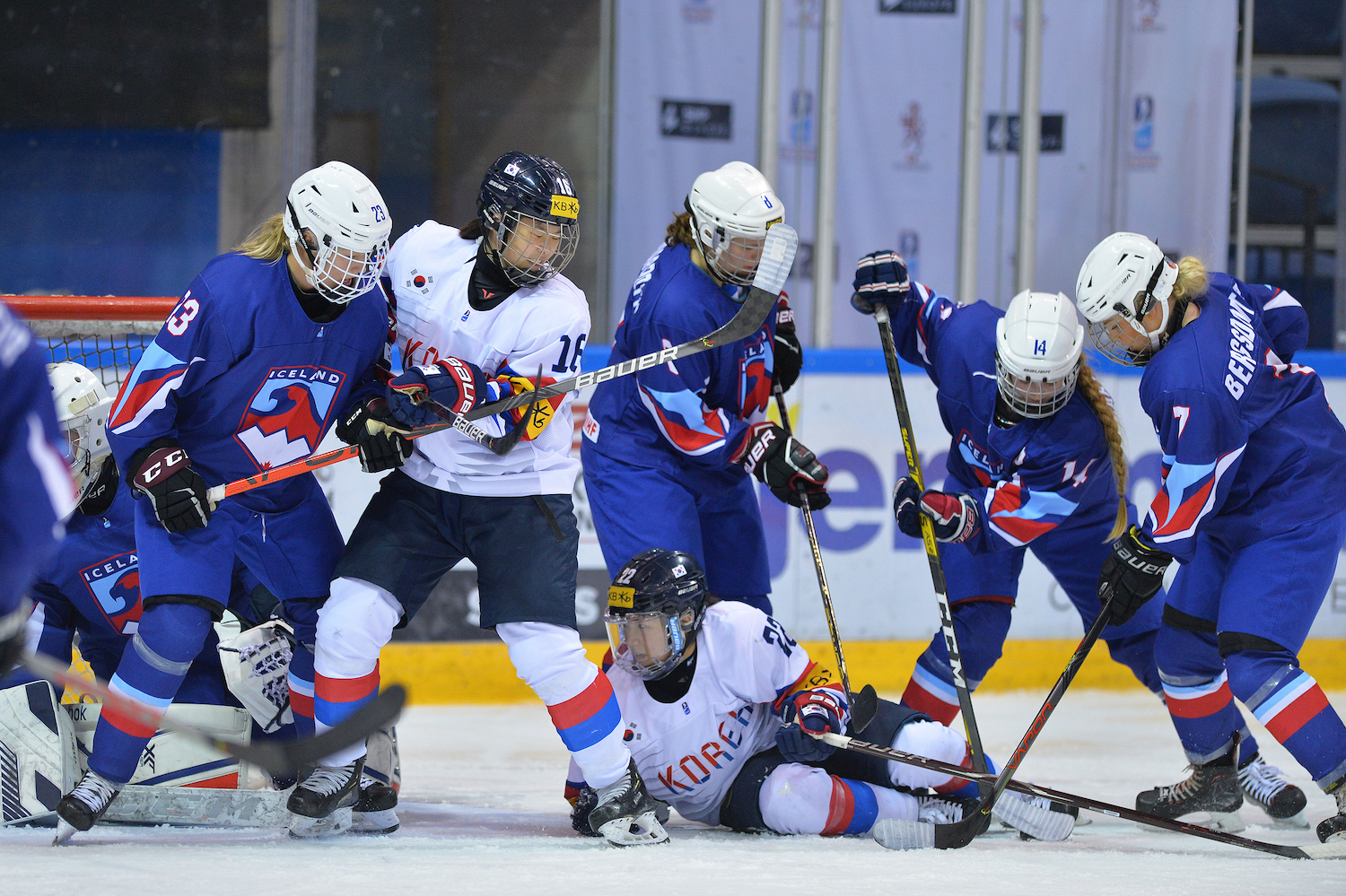 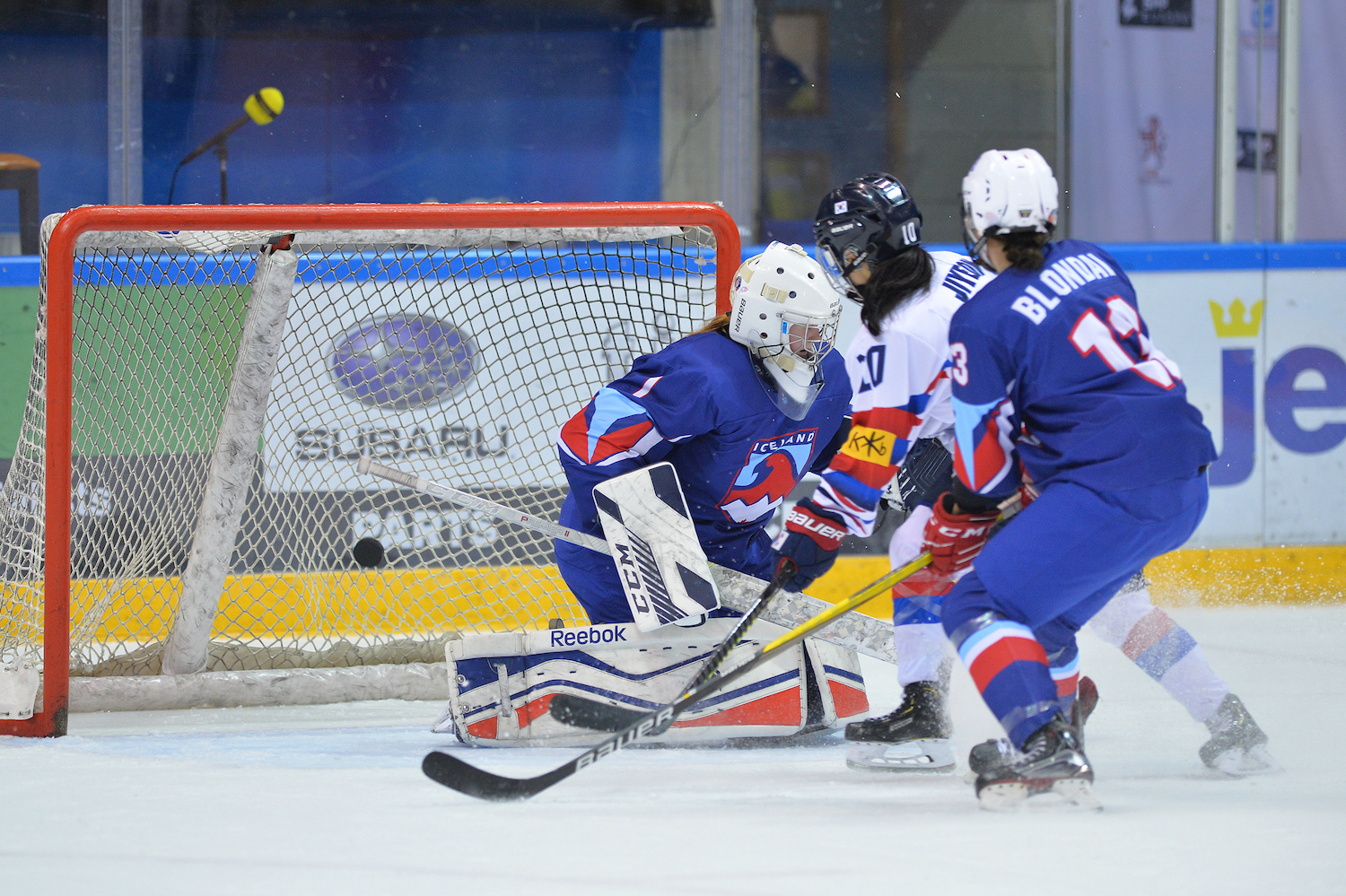 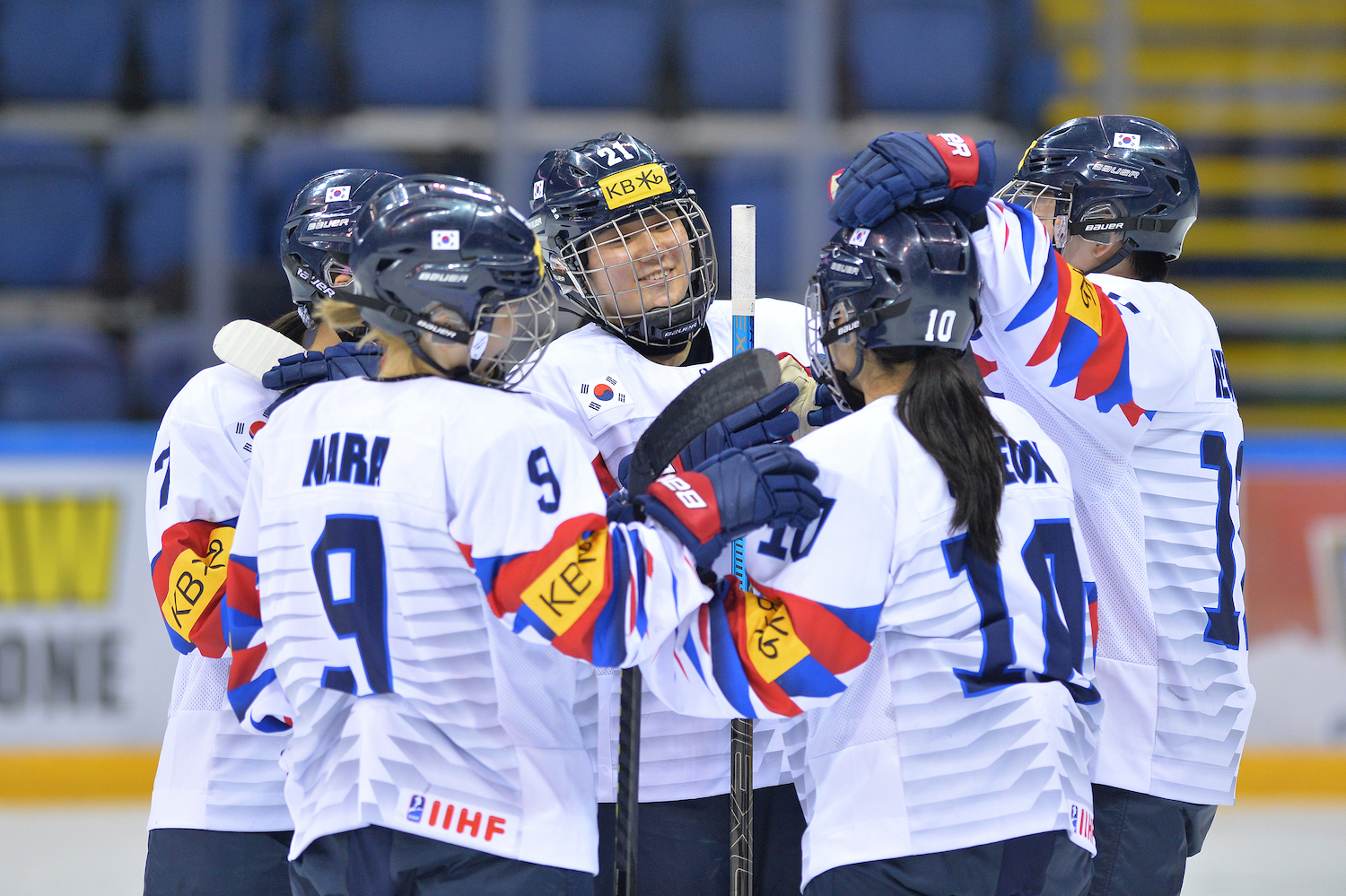 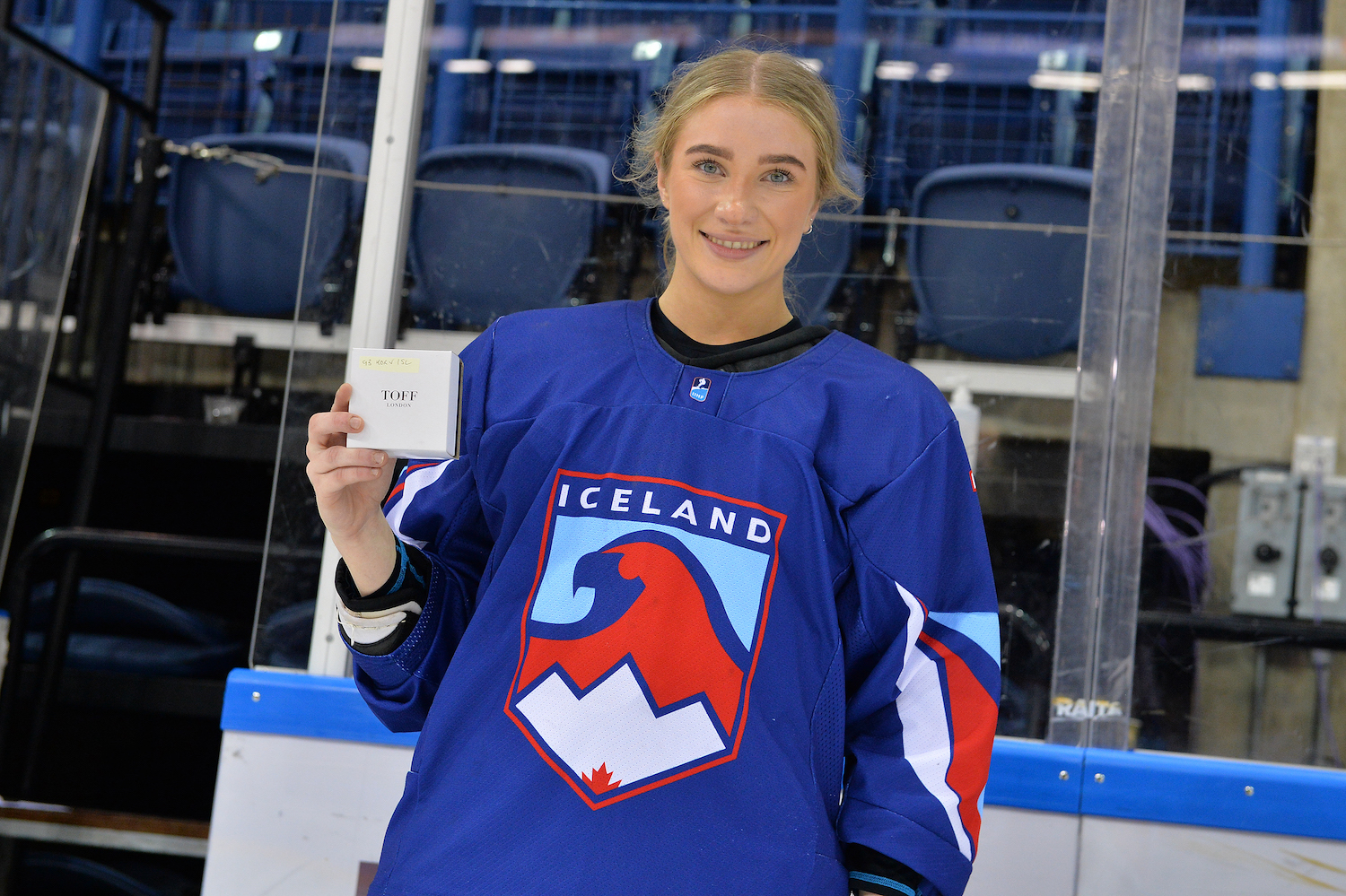 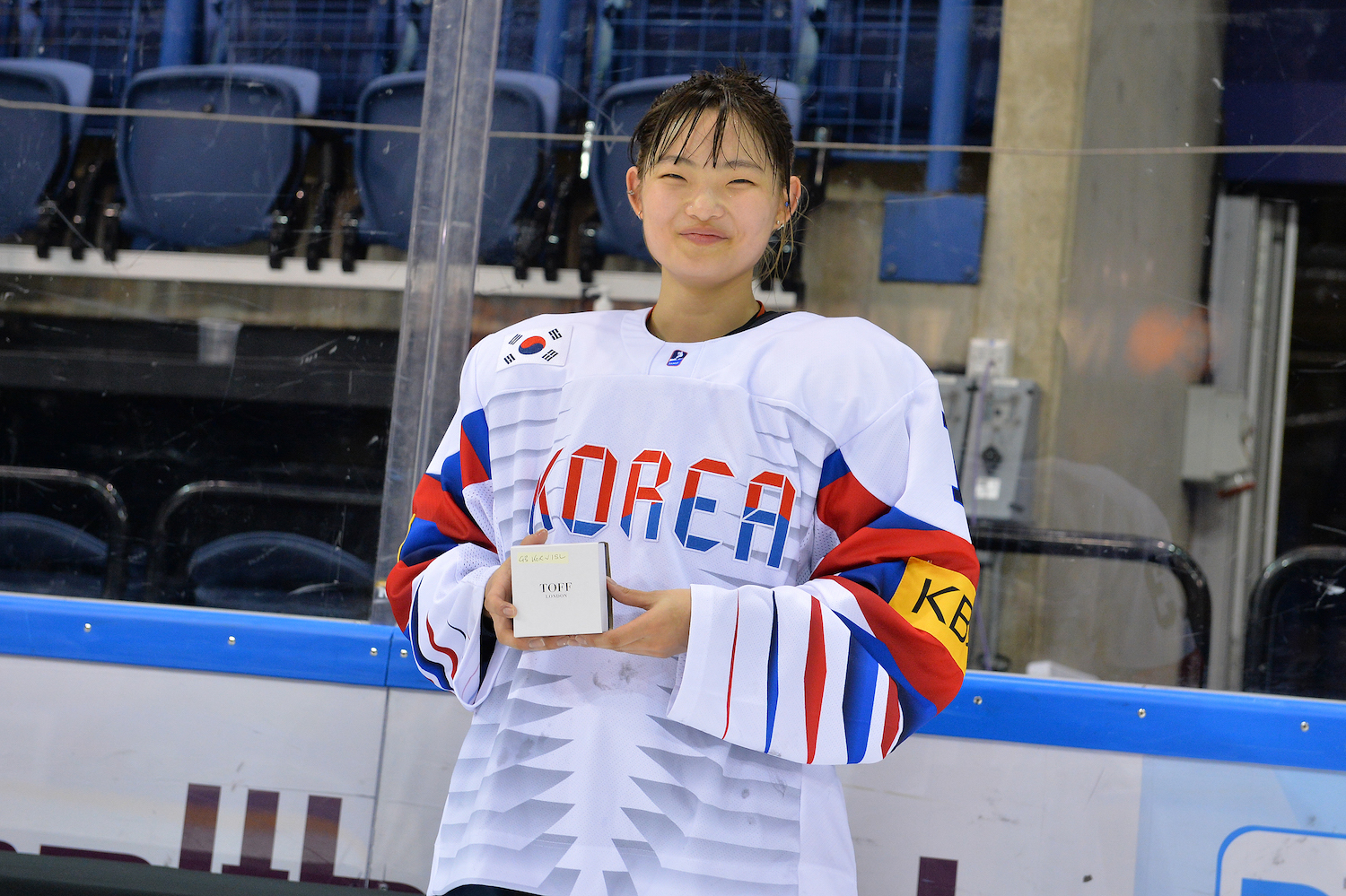 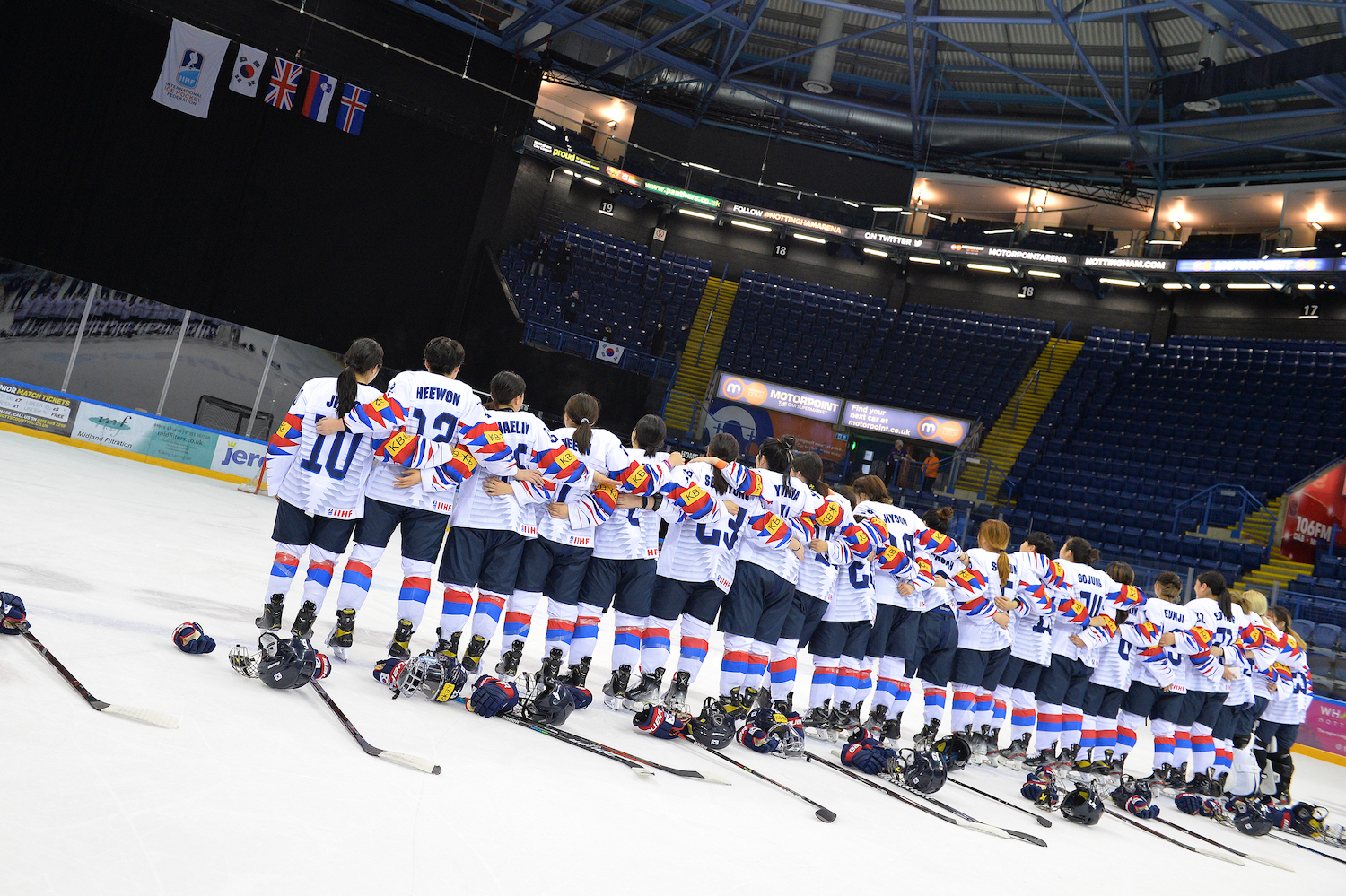 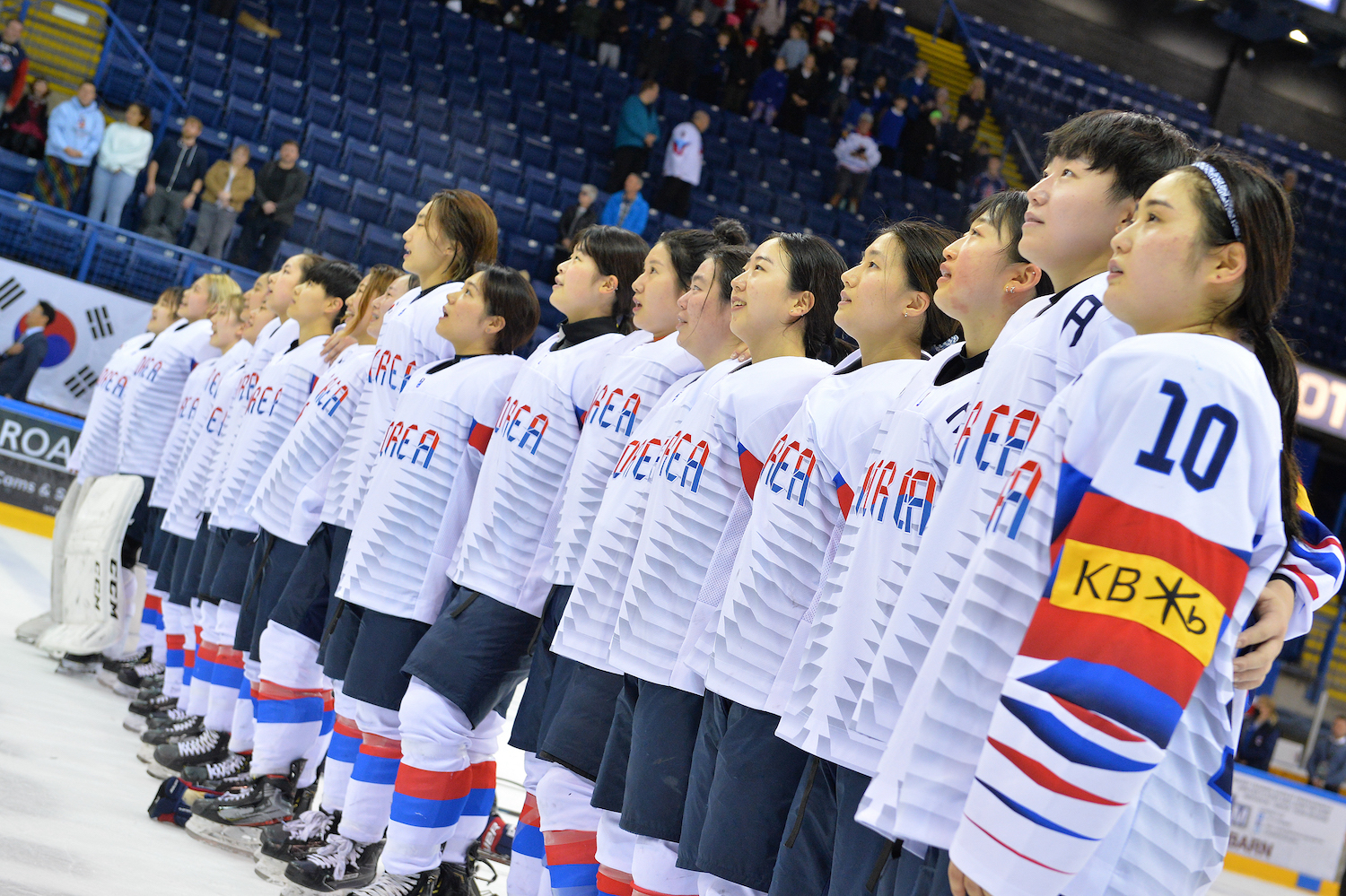