Although Mexico is widely seen as the strongest ice hockey nation in Latin America, it’s the first time the host of the Pan-American Ice Hockey Tournament, an event organized annually by the Mexican Ice Hockey Federation at IceDome in Mexico City and endorsed by the IIHF, won the men’s competition in the fourth attempt. In the first year a Canadian amateur hockey selection was invited that won. In the second and third year Colombia beat the Mexicans for first place with their selection of inline hockey player and players with ice hockey experience in North America.

Fourth time was a charm for the hosts as Mexico A won the nine-team men’s tournament. The team won its group after shutout wins against newcomer Chile and Argentina A and remained unbeaten in the secondary round with the group winners Mexico B and Colombia A joined by the best second-ranked team, Argentina A. The only team that came close was the Colombians but Mexico A prevailed winning the game 2-1.

That set up a final game between Mexico A and Colombia A and it was a tight affair again. There were enough chances on both sides and many power plays but only once the puck went in when Adrian Cervantes scored at 17:50 of the opening frame. The marker of the 31-year-old veteran of 12 men’s World Championship tournaments remained the only goal of the game and gave Mexico the much sought-after tournament win.

For a long period during the tournament it looked like Mexico could place two men’s teams in the medal rankings as Mexico B started strong with four wins in six games before eventually losing to Argentina A in the game for third place. The Argentines had a strong start with the highest score of the event, 26-0 against neighbours Chile, but lost twice to Colombia and against both Mexican teams in the first two rounds. But in the game for third place the Argentines moved up the ranks beating Mexico B 6-1 with pairs of goals from Matias Weir and Owen Haiek.

The points from the last game made Haiek, a 17-year-old Argentina-born player who plays U18 hockey for the Ontario Hockey Academy, the point and goal scoring leader of the tournament with 10 goals and 18 points in three games. Mexican player Carlos Gomez was second with nine goals and 16 points. They were followed by Argentine-American forward Matias Weir, who had 14 (9+5) points, and Brazil’s Bruno Farias Gomes with 12 (5+7).

Brazil A finished the tournament in fifth place after winning all games in the secondary round of the lower tier. That’s also the stage where newcomer Chile wrote history. The Chilean Inline and Ice Hockey Federation formed an ice hockey national team for the first time ever and had a rough start losing to Argentina A 26-0 and to Mexico A 17-0 but improved during the tournament. In their third game they beat Brazil B 6-0, edged Argentina B 4-3 before losing to Colombia B and Brazil A to finish the nine-team event in seventh place.

The Mexican women’s team won the Pan-American Ice Hockey Tournament in the women’s category for the third consecutive time. Like last year Colombia finished as runner-up and Argentina in third place.

Mexico A won the tournament with a clean 6-0 record. After a slow start in an internal clash with Mexico B that ended with a 3-2 win, the team continued with shutout victories against Brazil, Colombia and Argentina. In the semi-finals they beat Argentina again, 4-1, to create a final clash with Colombia.

The Colombian women started the preliminary round with a 3-2 edging of Argentina, and a 10-0 blanking of Brazil before losing 9-0 to Mexico A and 3-2 to Mexico B. However, in the semi-finals between the second- and third-ranked teams Colombia took revenge and beat Mexico B 5-4 to reach the final.

The Colombians tried to challenge Mexico’s A-team in the second encounter of the opponents as well. Claudia Tellez opened the scoring at 3:26 for Mexico A but then the game remained open for a long time until Maria Chavez started her hat-trick campaign with her first goal at 9:45 of the second period. She added two more goals in the third period and Giovanna Rojas netted the puck late in the game for the final score of 5-0. 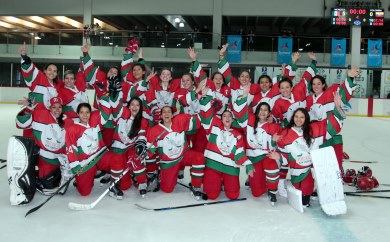 Argentina finished the preliminary round in fourth place – after a 14-0 over Brazil the team suffered a tight defeat to Colombia and lost to both Mexican squads – and improved to third place when taking revenge on Mexico B with a 4-2 victory in the third-place game thanks to a Leana Villagra hat trick.

The Brazilian women’s team returned after a break last year to play in the Pan-American Ice Hockey Tournament for the second time but remains winless in international competition and finished the event in fifth-place.

The 16-year-old Rojas twins led the scoring race of the women’s tournament with Joanna having 17 points (12+5) and Giovanna 14 (11+3) followed by their teammate Maria Chavez with 13 (10+3). Argentina’s Casiana Casini was the best non-Mexican scorer with seven points (6+1) in just two games, the same number of points Colombia’s Victoria Thorson.