Sophie Kratzer, a long-time member of Germany’s national women’s team throughout the 2010s, passed away on 13 January 2020 after a hard-fought battle with cancer. She was just 30 years old.

Kratzer had a distinguished career with her national team and even more so in the women’s Bundesliga with her club team ESC Planegg, winning seven national titles between 2003 and 2017, including an unprecedented five in a row, 2010-15. Her team also captured the Elite Women’s Hockey League in 2010 and the Elite Women’s Hockey League Super Cup in 2012.

“With her we lost a great athlete, great teammate, and very good friend,” said the team and board of ESC Planegg in a statement. “Our heartfelt condolences and deep sympathy go to her relatives and friends.  We are very sad, but also very grateful for the many sporting and personal moments that we were able to experience with her. We will not forget them and will carry them in our hearts.”

Kratzer started her international career at the Women’s World Championship in 2009 after graduating from Dorfen high school the previous year. She was part of several historic teams, namely the WW team of 2011 that won the Division I to earn promotion to the top pool, where it remained for three years, and another team that won the Division I in 2016. She also helped Germany qualify for the 2014 Olympics in Sochi, where the team finished seventh under coach Peter Kathan.

In all, Kratzer played in 149 international games including three top-level events, starting with the 2013 Women’s Worlds. She last played at an IIHF event in 2017, at the Women’s World Championship in Plymouth, Michigan, when Germany had its best result ever at the WW, finishing fourth after stunning Russia, 2-1, in the quarter-finals and eventually playing in the bronze medal game.

Kratzer’s influence on hockey in Germany extended beyond the women’s game. In the 2016/2017 season she doubled up with her role on the ice while also working in marketing and communications for the Organizing Committee of the men’s IIHF Ice Hockey World Championship in 2017 when it was co-hosted by Germany (Cologne) and France (Paris).

"We are deeply touched and shocked by the loss of our former, merited national team player and likeable colleague Sophie that cannot be put into words. We look back at her great performances in the national team jersey and also as part of our organizing committee at the 2017 IIHF Ice Hockey World Championship on home ice," said Franz Reindl, President of the German Ice Hockey Association and member of the IIHF Council.

"With her great commitment and her friendly manner she inspired on and off the ice. She leaves an incredible void. The German Ice Hockey Association and the entire German ice hockey family are in their thoughts with her family and express our deepest and most sincere condolences to her family and relatives."

The funeral will take place on 25 January in her hometown of Dorfen, just east of Munich. 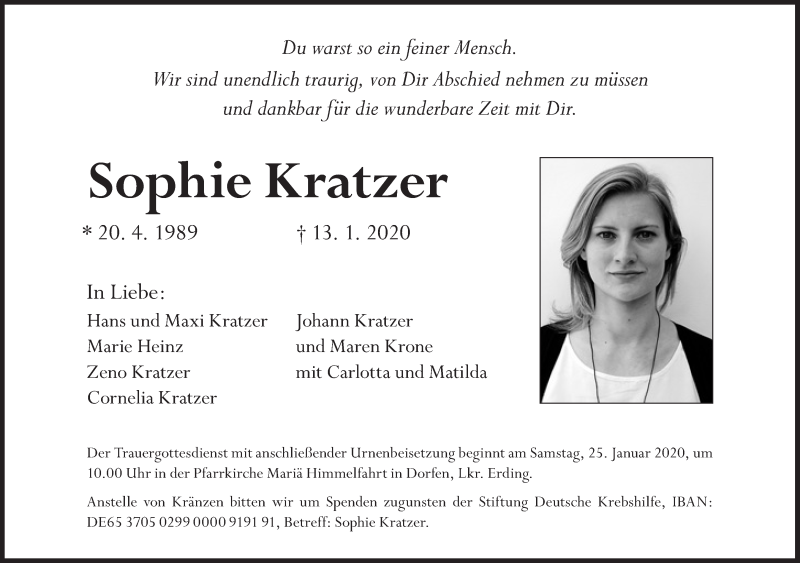