Ice making in the Balkans
The ice sheet at the Winter Sports Palace – the main ice hockey venue in Bulgaria – was made as part of the Balkan Ice Making Seminar with members of the IIHF Facilities Working Group on-site in Sofia.
photo: Cornelia Ljungberg
share
For the first time since the Covid-19 outbreak the IIHF staged a seminar with physical presence. The IIHF Facilities Working Group, in collaboration with the Bulgarian Ice Hockey Federation and the Winter Sports Palace, organized the Balkan Ice Making Seminar in Sofia 19-22 August 2021.

“Our goal is to transfer the knowledge of everything we have to our member national federations, so they can use it at home, teach others, work together and better their hockey development. We are open and we don’t want anybody to have any secrets. Facilities are one big part of that development,” said Frank Gonzalez, the chairman of the IIHF Facilities Working Group.

“All that is work in progress to develop better hockey in these countries, not only in the lower division nations, but also in the top nations. The playing field should be one of the most important aspects of our game on a safety and security issue for the players and game officials who are on the ice and in the end will make our game interesting, safer and faster for the players, parents and fans alike, since this is what we do.”

The participants learned the basic techniques necessary for creating and maintaining a high-quality indoor ice surface for ice hockey competitions. There were in-class and on-ice instructions of generally accepted industry best practices for ice making and ice maintenance.

“One of the unique things about this seminar is that we have eight participating countries – Bosnia & Herzegovina, Croatia, Greece, Romania, Serbia, Slovenia, Turkey and Bulgaria,” said IIHF Facilities Working Group Secretary and IIHF Transfer of Knowledge Director Cornelia Ljungberg. “The last Ice Making Seminar we organized was in Beijing, in July 2018, and there we had over 50 attendees from China. We always aim for the participants to share what they have learned in the seminar with their colleagues and ice management staff in their respective countries.”

Theoretical classes were conducted in Grand Hotel Sofia and the on-ice practical exercises and actions were made on the main rink at the Winter Sports Palace, which was built in Sofia for the 1983 Winter Universiade. The arena has hosted many IIHF Ice Hockey World Championships in the lower divisions in different age groups for men and women and also figure skating, short track and curling championships and tournaments.

“This was a very useful seminar for our region, which has limited resources and regular problems with ice rinks. We usually have to work with old machineries and to put a lot of efforts to make good ice,” explained a delighted Stoian “Toni” Batchvarov, BIHF Executive Director and Member of the IIHF Youth & Junior Development Committee.

“The last time the Bulgarian Ice Hockey Federation hosted an IIHF World Championships was the U20 Division III tournament in January 2020. Around that time the idea of holding an ice making seminar in Sofia arose. But we had to wait more than a year and a half because of the pandemic. And here we are – with eight participating countries that have a total of fewer ice rinks than Hungary for example. Until now the ice making seminars were just for the host countries.

”We had a great team of experts teaching the participants in the seminar, giving them the knowhow of this craft. Manu Varho and Jeff Theiler were the main figures in making the ice for the 2021 IIHF Ice hockey World Championships in Riga and NHL players were saying that this was the best ice they have ever played on. Zoltan Kovacs has a great experience building ice rinks in Hungary, where this became almost a public policy. A special machine that costs 12,000 euro and different tools were sent just for the seminar from Finland. The paint, which is used also for NHL arenas, came from Toronto. For the first time on Bulgarian ice we now have paper lines,” Batchvarov continued.

“I’m so happy, because the participants from the Balkan countries are so open-minded. They had lots of questions, they needed answers and we tried to give them the best answers and still they had good questions after that. It was great motivations for our teachers also,” said Manu Varho, Director of Sports Facility Maintenance at the Sport Institute of Finland in Vierumaki and Member of the IIHF Facilities Working Group.

“The host, the BIHF, was running this seminar so nicely and smoothly. We have to give big thanks to Toni Batchvarov. When we go to the lower-division ice hockey countries, hockey is not one of the most popular sports, also the governments and the city councils are not investing so much money for indoor rinks and probably the architects and engineers don’t have the same knowledge how to build ice rinks. So when we came here, we saw some problems with ventilations, air cooling et cetera. They are not on the same level that we want to have, but still the maintenance guys here are so passionate, they want to work hard to bring up the level.”

Anton Ivanov, the manager of the Winter Sports Palace, was also participating in the seminar and was quite satisfied from the things he learned during these days and the contacts he made: “It was quite useful to learn how to paint the whole ice and put the markings with handy tools, to learn the subtleties of the watering of the ice, the sequence of the actions, how to build a six-centimetre ice sheet millimetre by millimetre, to seal the paper lines under the ice. In 2-3 weeks we have to freeze the second rink in the arena and we hope to use immediately the acquired knowledge. We will make the necessary tools, maybe it will take twice as much time, but the end result will be visible to all.”

“Immediately after I arrived and opened the boxes with the equipment, which was sent from Vierumaki, the guys here made photos, took measurements. They found out that if they want to make good ice, they have to have different quality of maintenance tools. They want to make these tools by themselves – the same or similar. It was so fascinating,” Varho said. “There is nothing like ‘one person knows everything’. We are sharing the knowledge, but we are also sharing all the equipment and tools that we use, because we have the same goal – perfect ice. For example the concrete floor has to be flat, but was not build that way. We made measurements and now we know where the highest and lowest spots on the floor are. We have a map, which is giving information to the maintenance guys where to have more thickness in order to make the ice to be flat.”

One of the ice makers from abroad was Dragus Yordake from Romania. “We were working with top level guys, who have great international experience. We learned the right way to build a rink from scratch and also to be more effective in our work,” he said. “Personally, I got information that I never heard before, that I have never seen on the internet either. It’s been amazing. I gather all I need and have the experts’ contacts. We plan to have a regional meeting with all the ice masters in the country and I will share this knowledge with them. We will make a plan for everyone, so they can work the right way, on the same level and to make the best ice everywhere in Romania.” 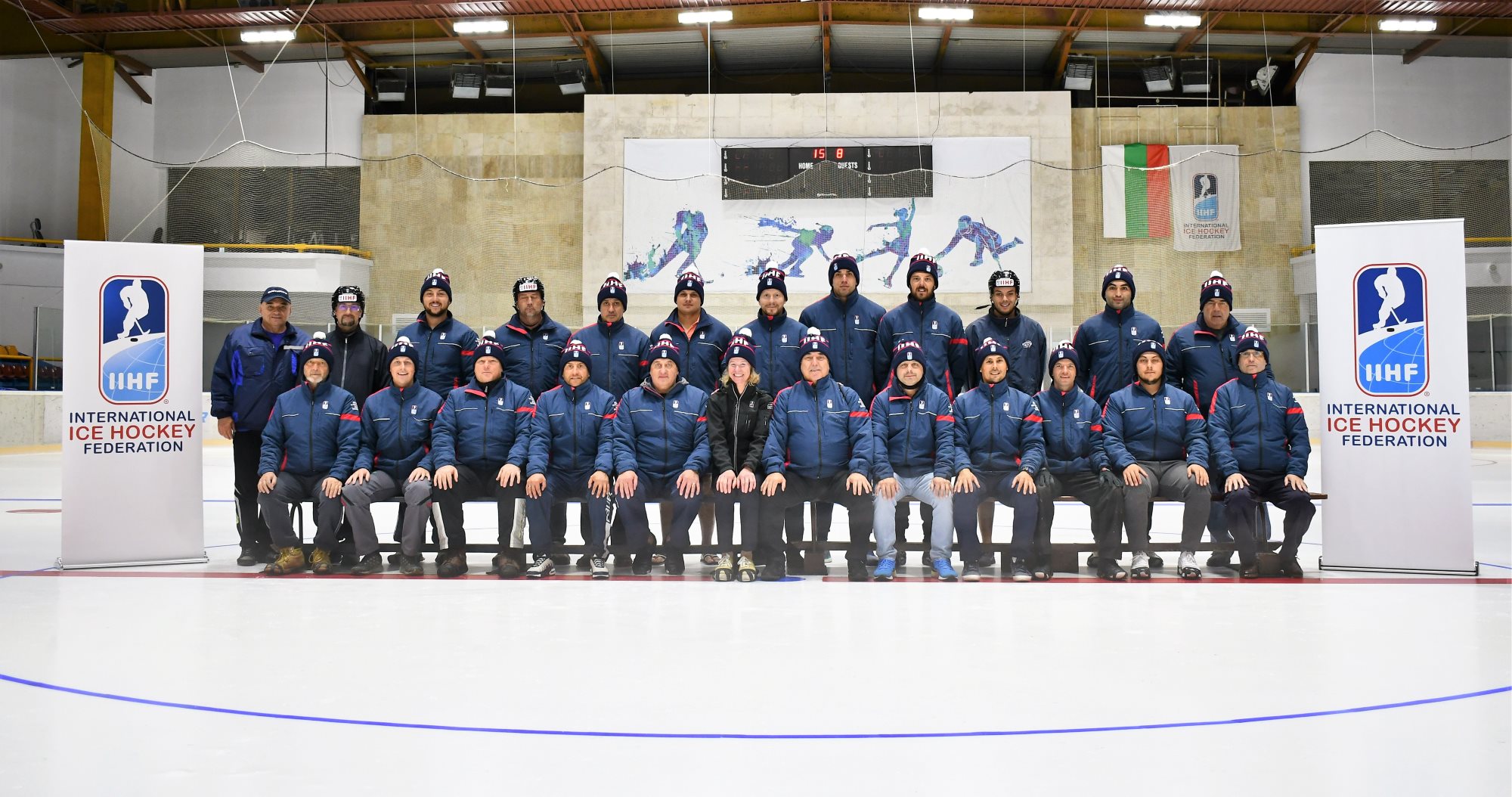 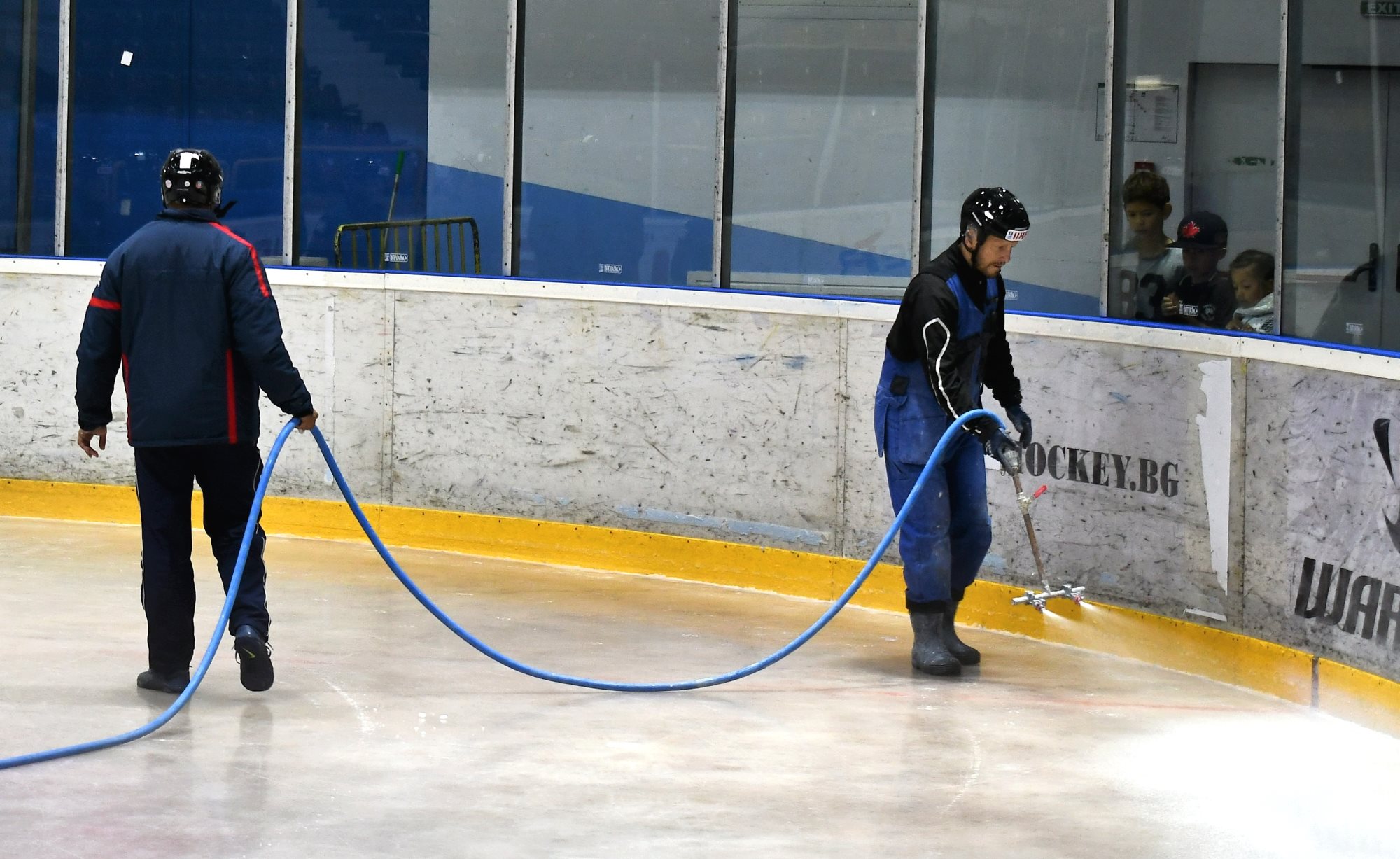 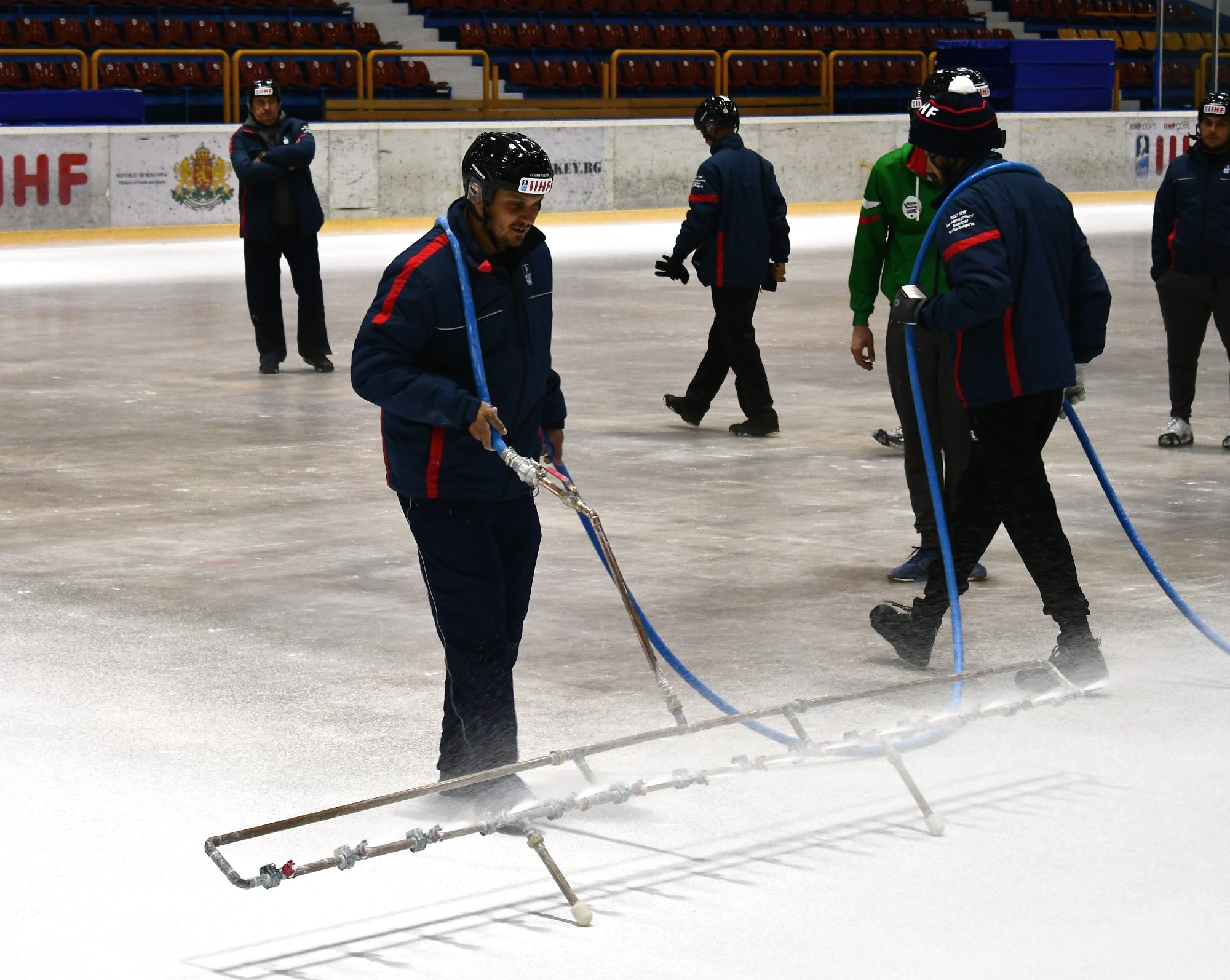 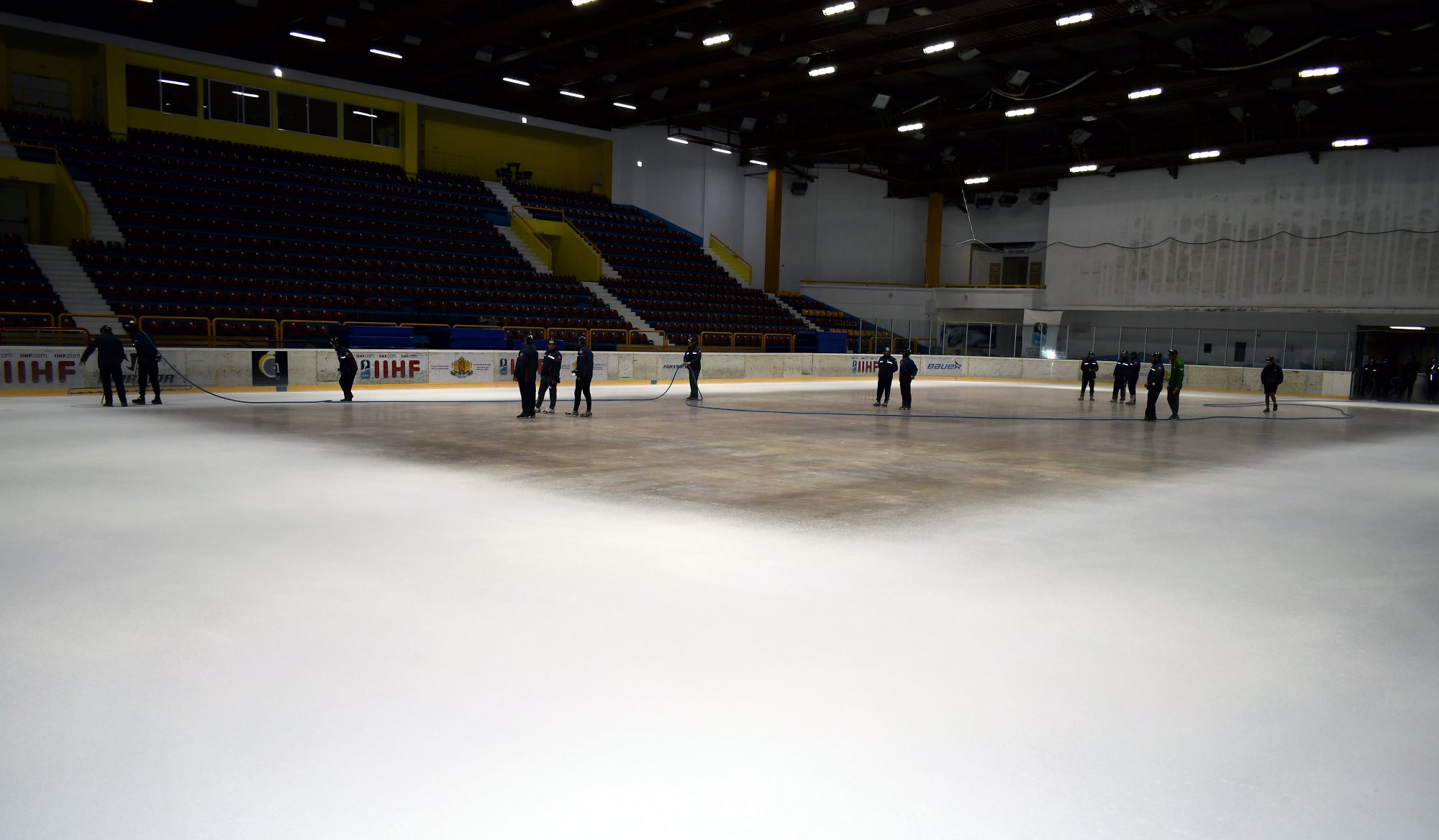 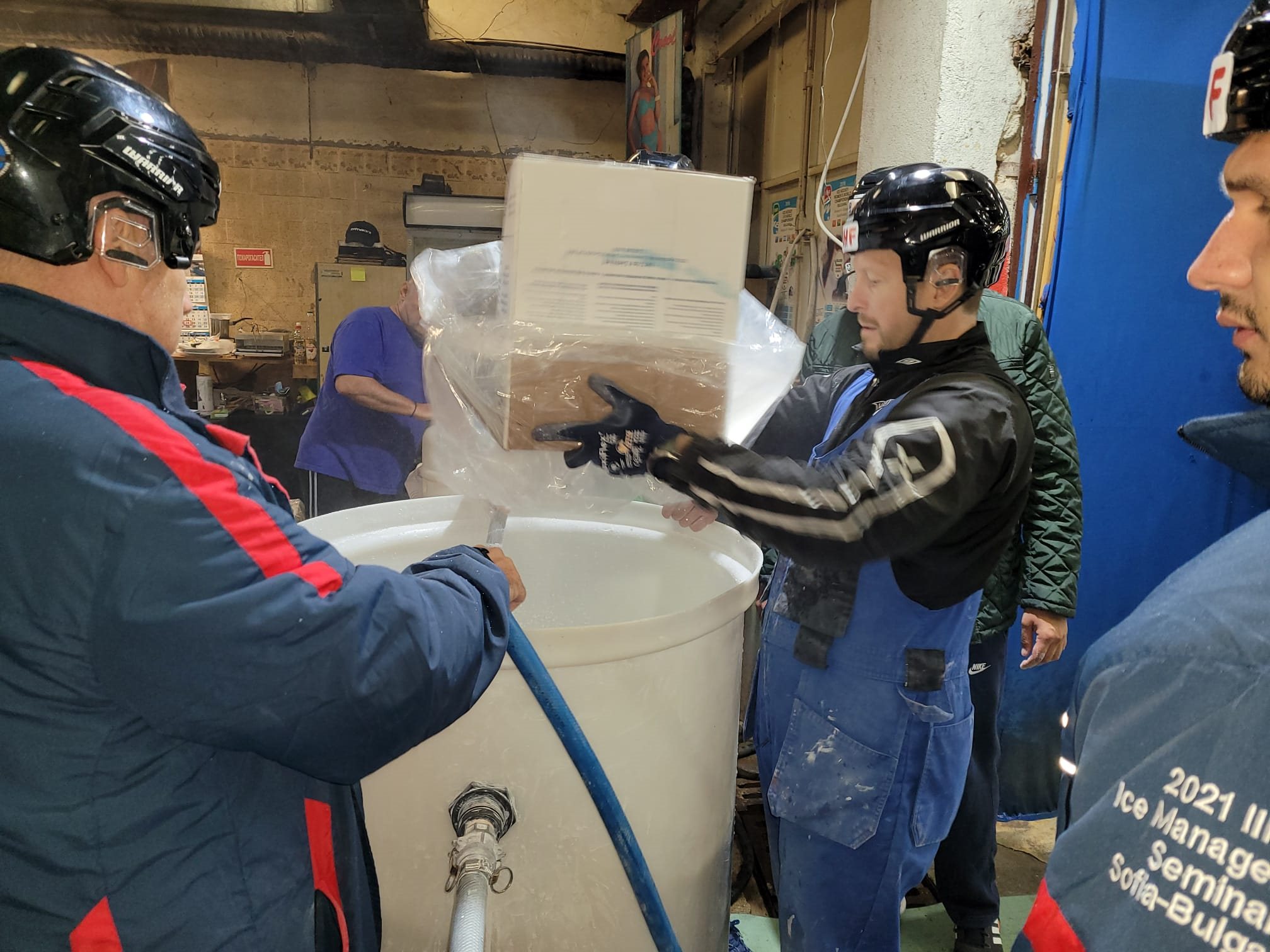 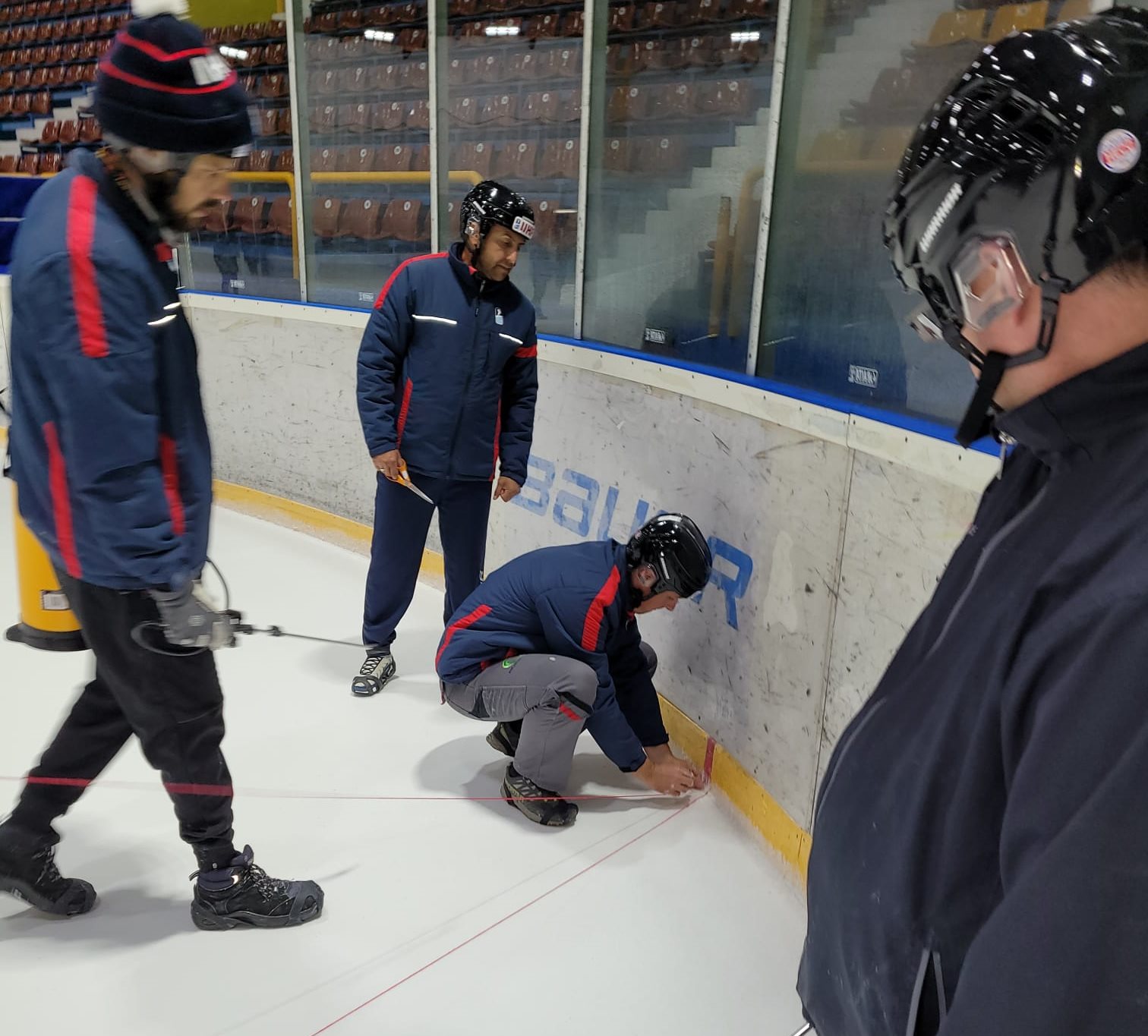 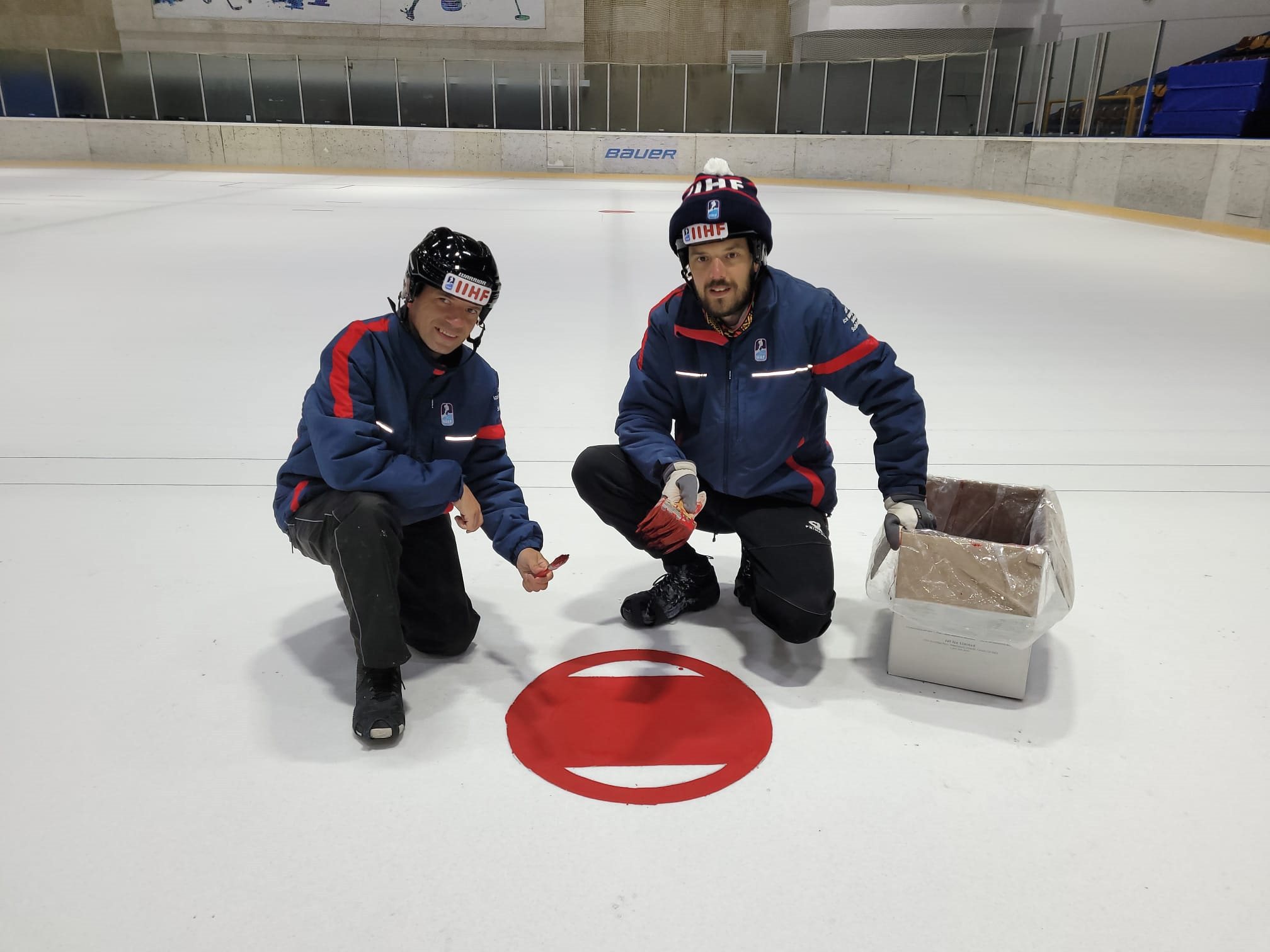 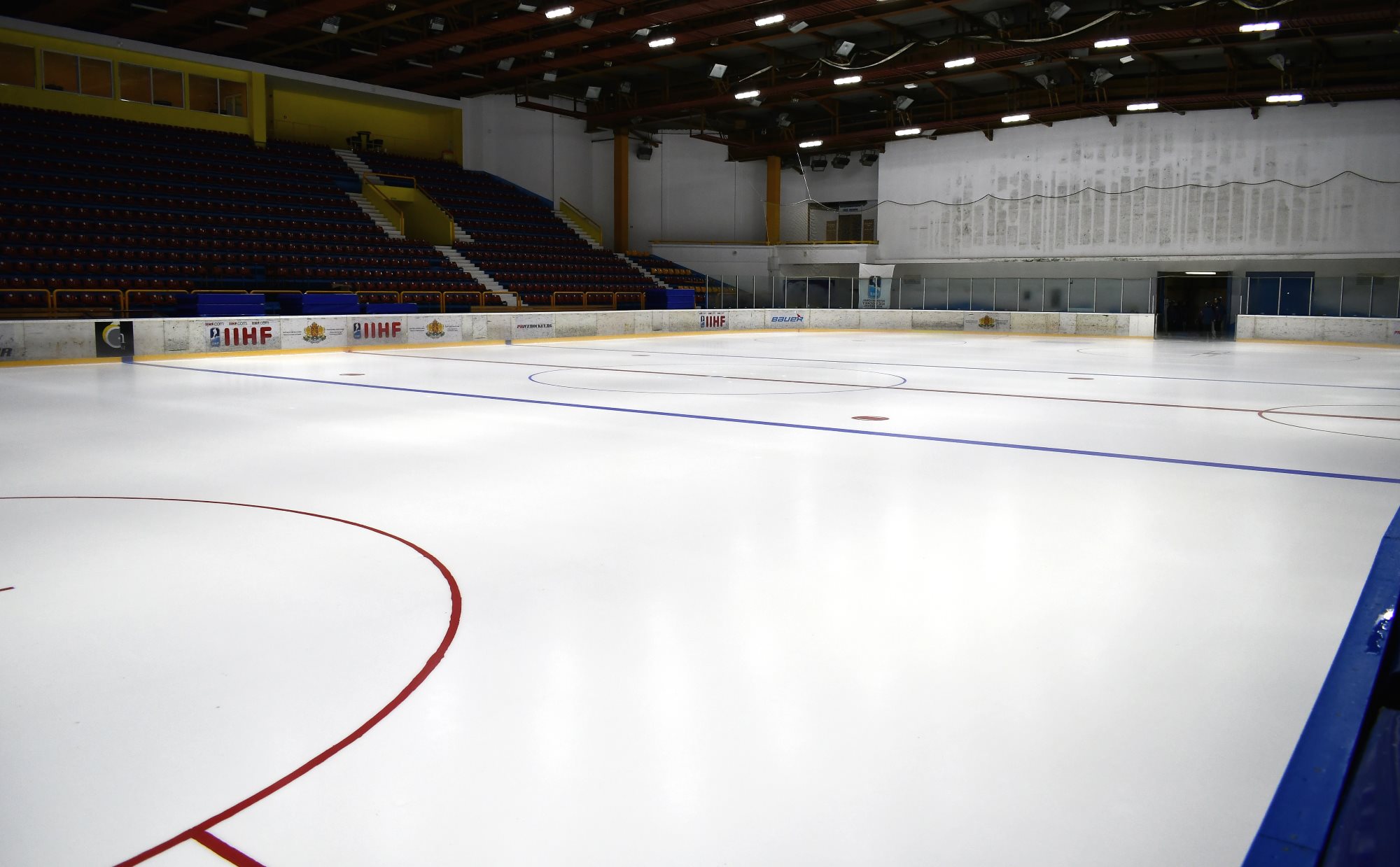 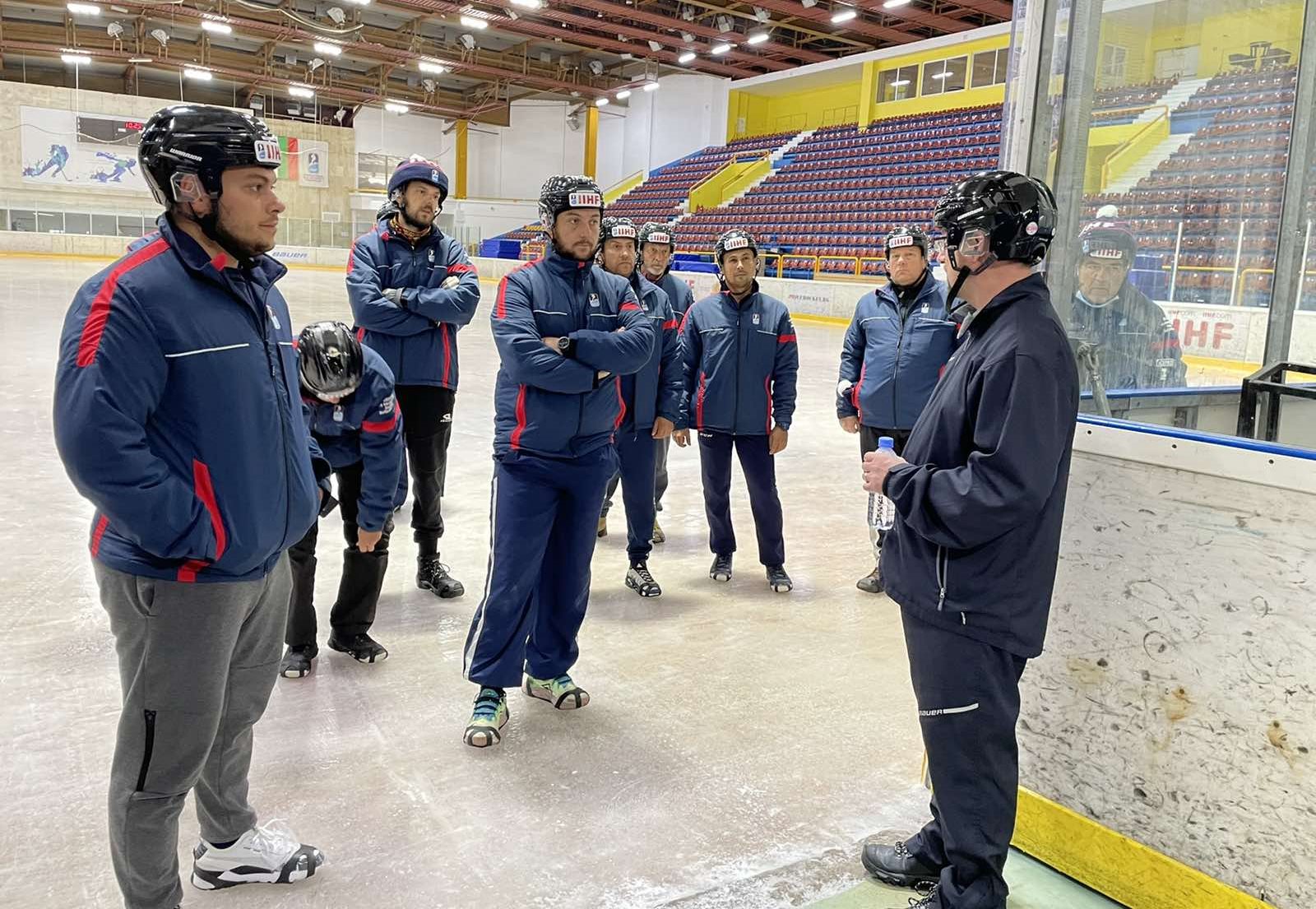 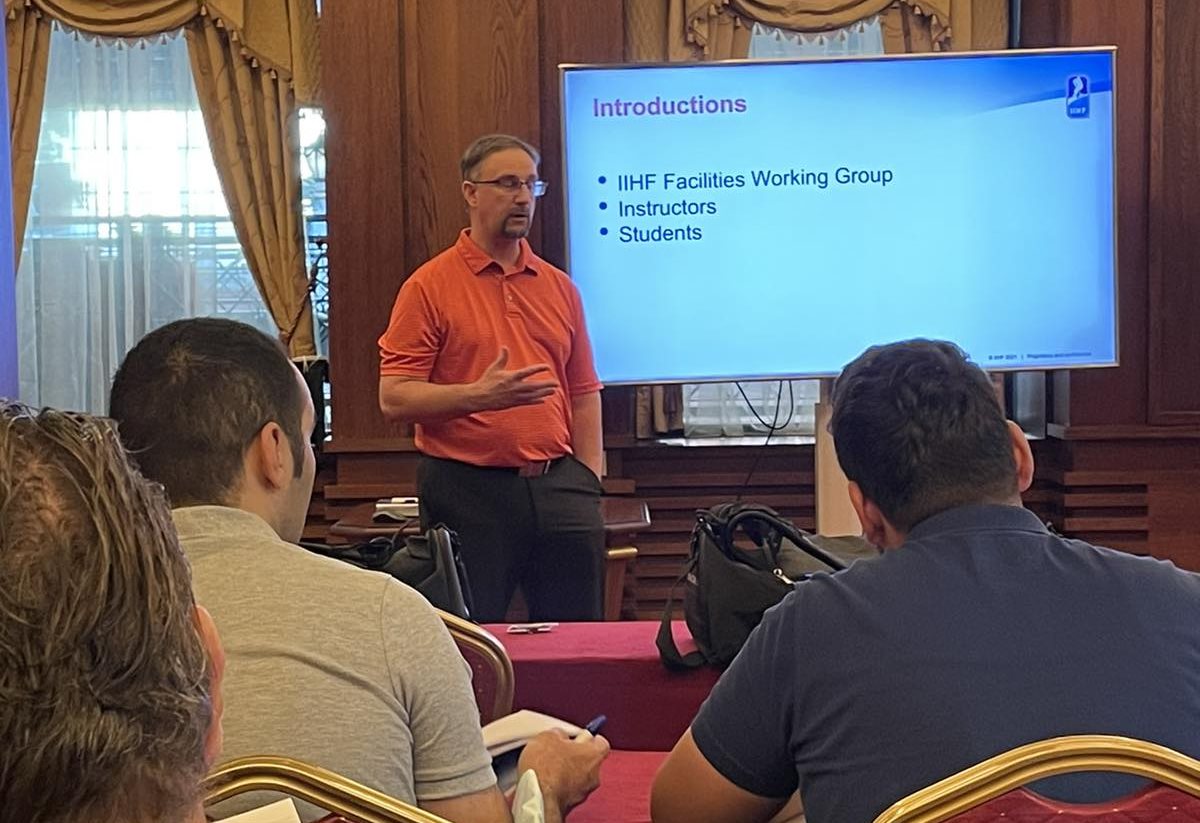