How the elections went in 1994
L-R: IIHF President René Fasel at a meeting with the NHL in Helsinki in 1994 after his election with IIHF General Secretary Jan-Ake Edvinsson, Gary Bettman and Jeff Pash of the NHL and IIHF Council member Walter Bush.
photo: IIHF Archive
share
The last time a new IIHF President was elected was at the 1994 IIHF General Congress in Venice, Italy, when René Fasel was elected as successor of Gunther Sabetzki. Fasel was reconfirmed in less contented elections in 1998, 2003, 2008, 2012 and 2016 but decided not to add another term.

27 years later, Fasel’s successor will be elected exactly in one week from now in St. Petersburg, often referred to as the Venice of the North with its many canals and bridges built according to the liking of Peter the Great three centuries ago.

The dissolutions of these countries were not without issues even as few years had passed. The IIHF membership had to vote on which group would be the representatives of the Russian Federation at the congress due to internal, legal struggles in Russia. And solutions had to be found for the new countries after the dissolution of Yugoslavia and the Balkan wars as some countries didn’t allow their national teams to play against the remaining part of Yugoslavia (later called Serbia-Montenegro). New countries started to participate and first-time hosts were assigned such as Estonia, Lithuania and Ukraine for lower-division junior tournaments.

Women’s hockey advanced during the early ‘90s and the IIHF worked on the next Women’s Worlds as well as the first Olympic women’s ice hockey tournament in Nagano 1998 with the top-five countries of the preceding Women’s Worlds plus Japan defined as the qualified countries by the congress. Beside event allocations, a lot of time was invested to update the IIHF Statutes & Bylaws during the first two days.

The third day of the congress, 10 June 1994, was the voting day. The 42 nations represented had either one or two votes depending on their status combining for 78 votes and a simple majority of 40 votes needed to become president.

Seven candidates were formally in the race but on the voting day long-time President Gunther Sabetzki from Germany decided to withdraw and make space for a successor, and Paul Seeber (Italy) also took himself out of the race before the vote thus reducing the number of candidates to five: René Fasel (Switzerland), Kai Hietarinta (Finland), Gordon Renwick (Canada), Miroslav Subrt (Czech Republic) and Frans van Erp (Netherlands).

Exactly in this alphabetical order the candidates ended up after the first round of voting. René Fasel was in the lead with 36 votes, four shy from the majority and with a wide margin before second-ranked Kai Hietarinta. The last-ranked candidate would drop out after each round of voting, first van Erp, then Subrt without changing the race on the top too much.

When Gordon Renwick dropped out in the third round and his 14 votes were to go to either Fasel or Hietarinta in a head-to-head race in the fourth round, Fasel was elected President. He got 10 extra votes for a total of 46 votes, Hietarinta ended up with 32 votes.

When the new IIHF President will be elected next Saturday, ice hockey can expect another exciting race to determine the person to chair the IIHF. Five candidates are running for President, in alphabetical order: Henrik Bach Nielsen (Denmark), Petr Briza (Czech Republic), Sergej Gontcharov (Belarus), Franz Reindl (Germany) and Luc Tardif (France). In total 20 candidates have been nominated for the 14-member IIHF Council (see here).

The minutes of the presidential elections in 1994: 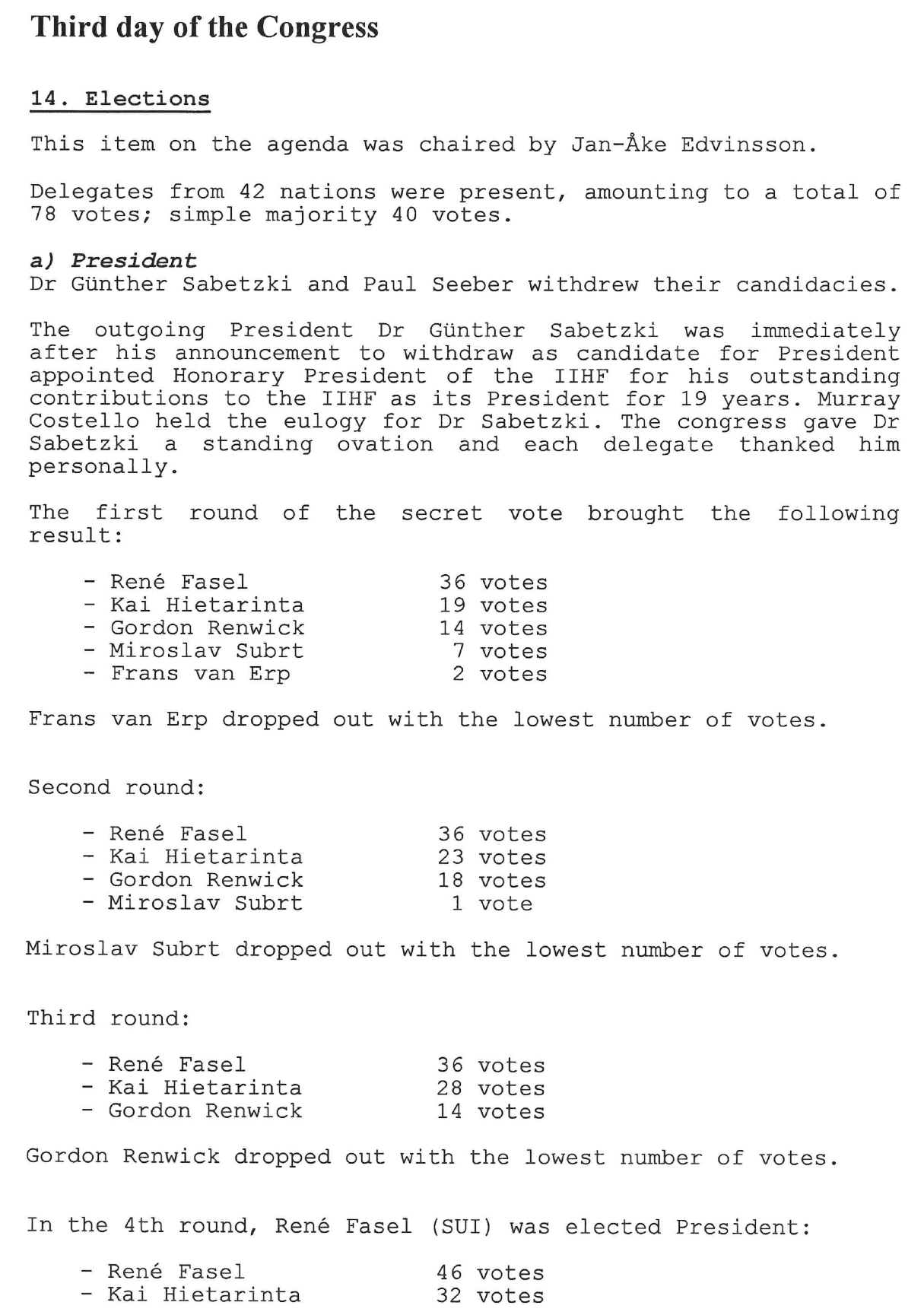