What is Abuse & Harassment?

It is the IIHF’s strong belief that everyone engaged in and around ice hockey has the right to participate in a respectful environment free of abuse and harassment in order to strengthen and promote the game of ice hockey around the world.

Psychological abuse – means any unwelcome act including confinement, isolation, verbal assault, humiliation, intimidation, infantilisation, or any other treatment which may diminish the sense of identity, dignity, and self-worth.

Physical abuse – means any deliberate and unwelcome act – such as for example punching, beating, kicking, biting and burning – that causes physical trauma or injury. Such act can also consist of forced or inappropriate physical activity (e.g., age-, or physique- inappropriate training loads; training when injured or in pain), forced alcohol consumption, or forced doping practices.

Racism and discrimination – means any action or attitude, that subordinates or prejudices an individual or group based on race, skin colour, gender, ethnic, national or social origin, religion, philosophical or political opinion, marital status or sexual orientation.

Sexual abuse – means any conduct of a sexual nature, whether non-contact, contact or penetrative, where consent is coerced/manipulated or is not or cannot be given.

Neglect – means the failure of a coach or another person with a duty of care towards the player to provide a minimum level of care to the player, which is causing harm, allowing harm to be caused, or creating an imminent danger of harm.

The IIHF is committed to safeguarding all people engaged in ice hockey and takes a zero tolerance approach to any form of racism, discrimination, bullying, harassment and abuse.

It is the responsibility of everyone involved in the game of ice hockey to recognize and respond to signs of harassment and abuse.

All Abuse & Harassment cases will always be dealt with strict confidence.

The IIHF Abuse & Harassment Policy can be found here.

All concerns regarding Abuse & Harassment can at all times be reported to the IIHF on the reporting page. 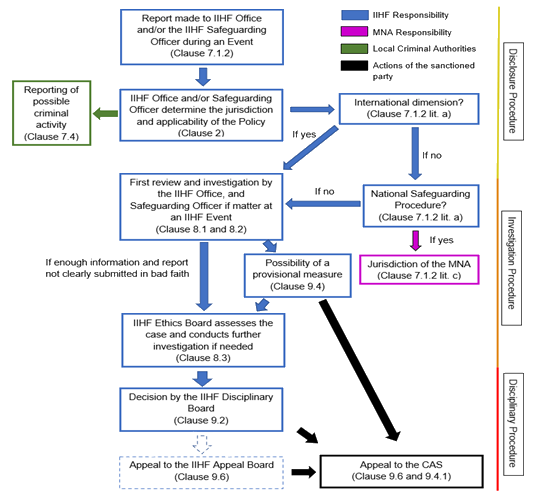