All-Time Great Britain Team
Incredible saves from Ben Bowns last year in Kosice helped Great Britain remain in the top division of the IIHF Ice Hockey World Championship.
photo: Matt Zambonin / HHOF-IIHF Images
share
Great Britain’s greatest days on the ice came in the 1930s, crowned by Olympic gold in 1936. Since World War II, though, appearances in the top division have been fleeting. Prior to last season’s survival sensation in Slovakia, the Brits had not appeared in the top division since 1994 and had not won a game at that level since 1962. With patchy records of many of the players of the 30s and 40s – and even the team of 1962 – this list necessarily has a modern bias.

Even then, there is a contrast of eras. British hockey in the 1980s and 90s – the era when I started watching the sport – was a very different animal from the 21st-century version. Scoring was sky high, with the British League’s top players from that time plausibly hoping to rattle up 200+ points in a season. But it was also a time when we saw some key figures emerge as the game regained a place in the sporting landscape of the UK, laying some of the foundations for the current upswing in the game. 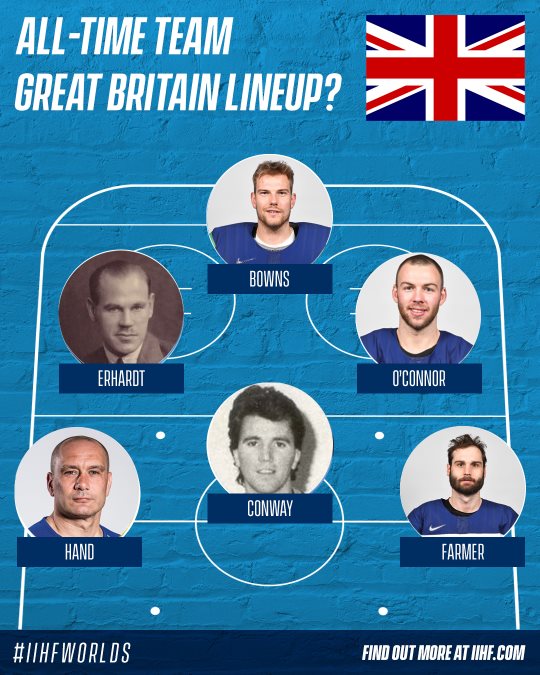 It’s not easy being a goalie for GB in the top division. In 1994, the goaltending stats made painful reading: three netminders got on the ice in six games; the GAAs ranged from 7.11 to 10.26 and nobody managed better than a 77.3 SV%. A quarter-century later, if Britain was to have any hope of surviving in the top flight, Ben Bowns had to improve on those numbers. And the Cardiff Devils favourite did just that. The raw stats (GAA 5.67, SV% 88.1) weren’t all that exciting, but throughout the tournament the Yorkshireman was featuring in the ‘save of the day’ clips broadcast during the intermissions. In total, he made 230 stops during the group phase to set a record for a single tournament. Crucially, 33 of those came against France, backstopping Britain to a memorable overtime win that secured its place among the Elite for another year.

Bowns began his hockey career in Sheffield and in his early years helped GB’s U20s win promotion to Division I. To get his breakthrough in the British Elite League, he moved to Hull. During his time with the Stingrays he established himself as first choice for the national team ahead of Stephen Murphy. International recognition brought him a move to Cardiff, where he has won two UK titles and a host of individual awards.

Erhardt was a pioneer of the game in Great Britain, part of the country’s greatest successes in the inter-war years. Born in Beckenham, where Kent meets modern-day London, he learned the game as a schoolboy in Germany and Switzerland before playing for the Princes Club in London from 1929 and later joining Streatham. On the international stage, he helped the Brits to World Championship bronze in 1935 before captaining the team to its Olympic triumph in Garmisch-Partenkirchen the following year. He was presented with his gold medal the day after his 39th birthday and remained the oldest player to win hockey gold at the Games until Pavel Datsyuk captained the Russians in 2018. The following year he added a World Championship silver to his collection before hanging up his skates.

That was by no means the end of his involvement in the game. Erhardt took up refereeing, wrote a book on the game and moved into journalism, but still found time to coach Team GB in its final Olympic appearance in 1948. In 1950 he was elected to the British Ice Hockey Hall of Fame and he was posthumously inducted into the IIHF Hall of Fame in 1998, the first British player so honoured. Erhardt did not only excel in hockey, he was a sporting all-rounder. Among his other achievements, he was the founder of the British Water Ski Federation.

This Durham-born defenceman has international pedigree – his father, Mike, was part of the British roster that reached the top division in 1994. As Ben followed in the family business and became a star at the Sheffield Steelers, family banter played on the fact that dad had taken on the Canadians in competitive play. In 2019, Ben got to follow suit. Indeed, O’Connor Jr finished with the greater bragging rights from his first taste of the Elite Pool. While the Brits of 1994 were relegated, with Mike unable to register a point, Ben’s class of 2019 survived in dramatic fashion. O’Connor had a hat-trick of helpers in that nerve-jangling overtime victory over France in Kosice to write his own piece of British – and family – hockey history.

The 31-year-old is one of the few British-born players to have learned the game at home and racked up significant experience overseas. As a teenager he headed Ontario and played four seasons of midget and junior hockey. After establishing himself in the British Elite League and the national team, he then headed abroad once more; first France, then three-and-a-half seasons in Kazakhstan, where he was twice named top defenceman in the Kazakh championship. O’Connor was close to joining Barys of the KHL before a short spell with Leksands in Sweden. In GB colours, he has compiled 47 points in 62 international appearances since making his debut in 2008/09.

The revival of British hockey in the 1980s saw the return of a national championship. A new league needed new stars, and Edinburgh-born Tony Hand was the man for the job. Internationally, he’s best known as the first Brit to be drafted by an NHL team; in 1986 he was selected by the Oilers and headed to Edmonton where he skated with the likes of Wayne Gretzky and Mark Messier at camp. Coach Glen Sather rated Hand “the smartest player there other than Gretzky”. Homesickness sent him back to Scotland – something he later admitted was a mistake – and he continued to pile up the points with Murrayfield Racers. At a time when the British League was dominated by imports, Hand was a much-cherished home-grown talent, matching the Canadians point for point.

With interest in the game growing at home, Team GB returned to action in 1989 and – with Hand to the fore – worked its way to the Elite Pool by 1994. Alex Dampier’s team relied heavily on dual-nationals, but Hand was the leading British-born player in the 1993 promotion campaign, collecting 14 points as the Brits swept Pool B in Eindhoven. The 1994 championship saw GB relegated, not to return to the Elite for 25 years, but Hand continued to represent his country and made his final appearance in 2007 in Division I. He subsequently coached GB in three World championship and two Olympic qualification tournaments and kept on playing until 2015 – completing 35 seasons on the ice. In 2017 he was inducted into the IIHF Hall of Fame as recipient of the Bibi Torriani award; in 2004 he was awarded an MBE for services to British hockey.

Conway is the only player on this list born outside of the UK. The Sault Ste. Marie native first played in Britain in 1985/86 with Ayr and returned in 86/87 to join the Durham Wasps. From then on, he remained in the British League, representing 10 teams before he retired in 2008. By the time the Brits began their climb to the Elite Pool, Conway was a naturalized player and he made a massive contribution to the back-to-back promotions in 1992 and 1993. In those tournaments he led the scoring, compiling 42 points in 12 games to fire GB back to the big time. He was also the leading scorer in Italy in 1994, albeit with 3 (2+1) points as the realities of life at the top hit hard.

By that time, Conway was on his way to becoming a legend in Basingstoke, where he still holds the club scoring record with 950 points in seven seasons in Hampshire. His international career continued until 1999 – including exhibition games, he made 58 appearances in total, scoring 66 (33+33) points. He was inducted into the British Hockey Hall of Fame in 2005. Conway’s cousin, Brett Perlini, is part of the current GB roster.

Think Robert Farmer, think clutch goals. In 2018, with Hungary 15 seconds away from securing the regulation time victory it needed to pip Britain to promotion from Division IA, Farmer popped up with the tying goal that turned the tournament upside down. A point was enough for GB to secure a return to the Elite Pool for the first time in 25 years; Farmer’s goal sent head coach Pete Russell dancing down the bench in delight. And the Nottingham-born forward was at it again in Kosice as, once again, the Brits prevailed in dramatic fashion. In a winner-takes-all survival showdown, France led 3-0 but GB fought back. Once again, Farmer got the tying goal and Ben Lake went on to grab the overtime winner and send France down as Great Britain’s expense. In each tournament, Farmer scored just one goal; each time, it was crucial.

The left winger rarely does things the easy way. Born in Nottingham, he made his senior debut for Sheffield, his hometown’s biggest rival in the Elite League. Indeed, the path to a debut for the Nottingham Panthers took him all the way to Alaska for a short stint in the ECHL. At the Panthers, he worked under head coach Corey Neilson, also part of the GB coaching set-up, and he helped the team win the Continental Cup in 2017 before becoming the first British club to reach the Champions Hockey League knock-out phase. His association with Neilson continued in 2019 when he joined his old coach at DEL2 team Lausitzer Fuchse.

Arguably, this whole list should comprise players from the 1930s, when Great Britain was matching the best in the world. Goalie Jimmy Foster still holds the record for the most shut-outs in a single World Championship and the best career GAA; had his hockey development not been entirely after his move to Canada as a child, he would have made the list. However, with little available footage and inexact records from that time, it’s hard to single out individuals. The 1994 team coincided with my first years of watching hockey; it would have been easy to fill the list with players I saw in Durham, especially the likes of Mike O’Connor, Rick Brebant or the home-grown Cooper brothers. Of the 21st century roster, Colin Shields – the second Brit drafted by an NHL team and the country’s all-time scoring leader ahead of Hand – was close to making the cut, while there’s hope that young Liam Kirk may yet forge a career in the big leagues and secure a place on future all-time lists.